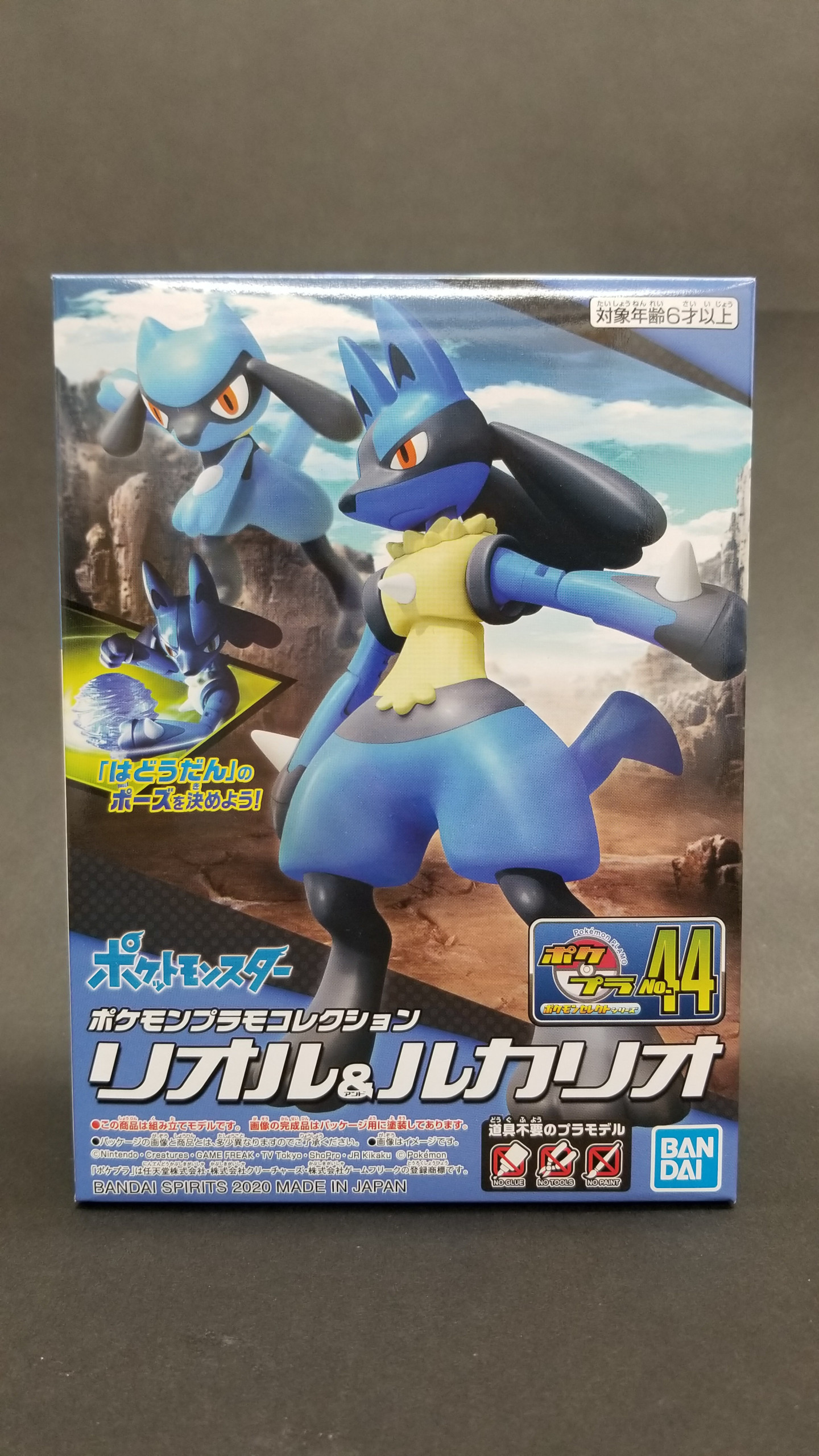 As the resident Pokemon Plamo builder for hobbylink.tv, this kit stands out for a few reasons. Bandai has taken some exciting new steps with this kit that really have my hopes up for the future. Let’s dive into why!

First and foremost, this is the first time either Lucario or Riolu have appeared in the Pokemon Plamo line. That’s a big step, as the last brand-new Pokemon introduced was Mew (who’s cute, but makes for a tiny kit) as part of a repurposed set of kits in Summer 2019.

We did see a Mega Lucario kit in 2014, followed by the same Mega Lucario repurposed into another set the same year. But design-wise, Mega Lucario features some striking differences, and mold-wise… well… 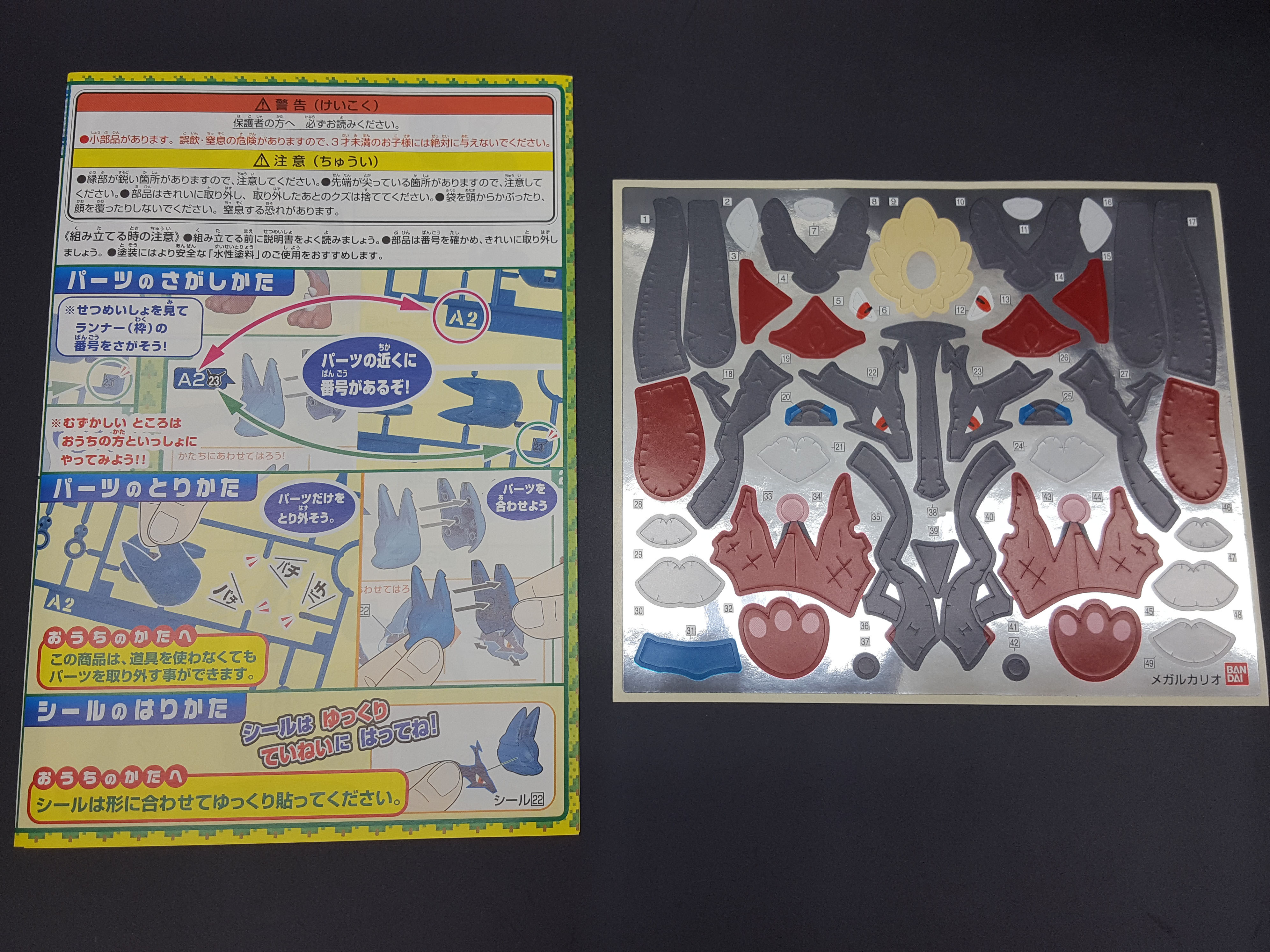 The stickers from the Mega Lucario kit (not included in the kit we are unboxing today!). As you can see, this was absolute sticker hell, and though you can’t see it here, several of these stickers were meant to cover hollow spaces in the molding instead of add details. It was a mess.

To give you a better idea, the last time Bandai made a Pokemon kit that featured 1) a new character to the line, and 2) new molding for all characters in the box, was four years ago with the release of the Lunala kit.

In the past, when Bandai put out sets of Pokemon that featured an evolved and unevolved form of the same monster, they were called Evolution Sets. But not this kit; this is part of the main Select Series line, which implies the quality may be to a higher standard. (Evolution Sets often skimped on the color separation and molding of the unevolved monsters.)

And lastly — articulation. I have build a lot of Pokemon Plamo kits. They usually feature a few gimmicks, with basic articulation of the neck, wings, or arms/legs. But I have personally only seen elbows in one kit, Mewtwo. This definitely has me hoping we’ll see more of this in the future. 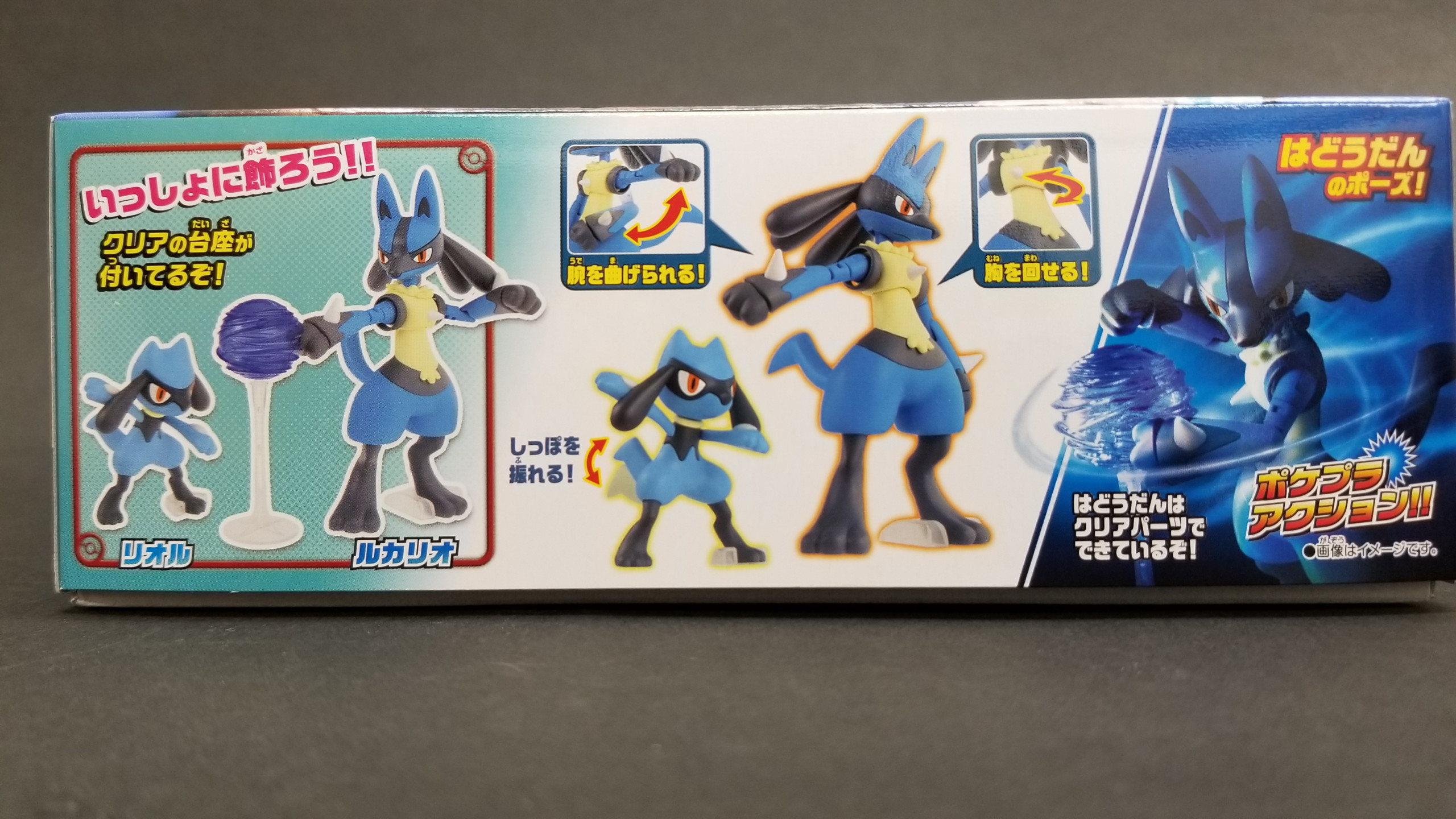 Here we get a look at both completed kits, including gimmicks. Look at Lucario’s elbows! I am excited.

There’s also a set of clear parts included to recreate Lucario’s Aura Sphere attack. These seem to be repurposed (recolored?) parts from the Mewtwo set with Mew I mentioned before. At the time of that release, they were new parts, so this isn’t a bad addition. 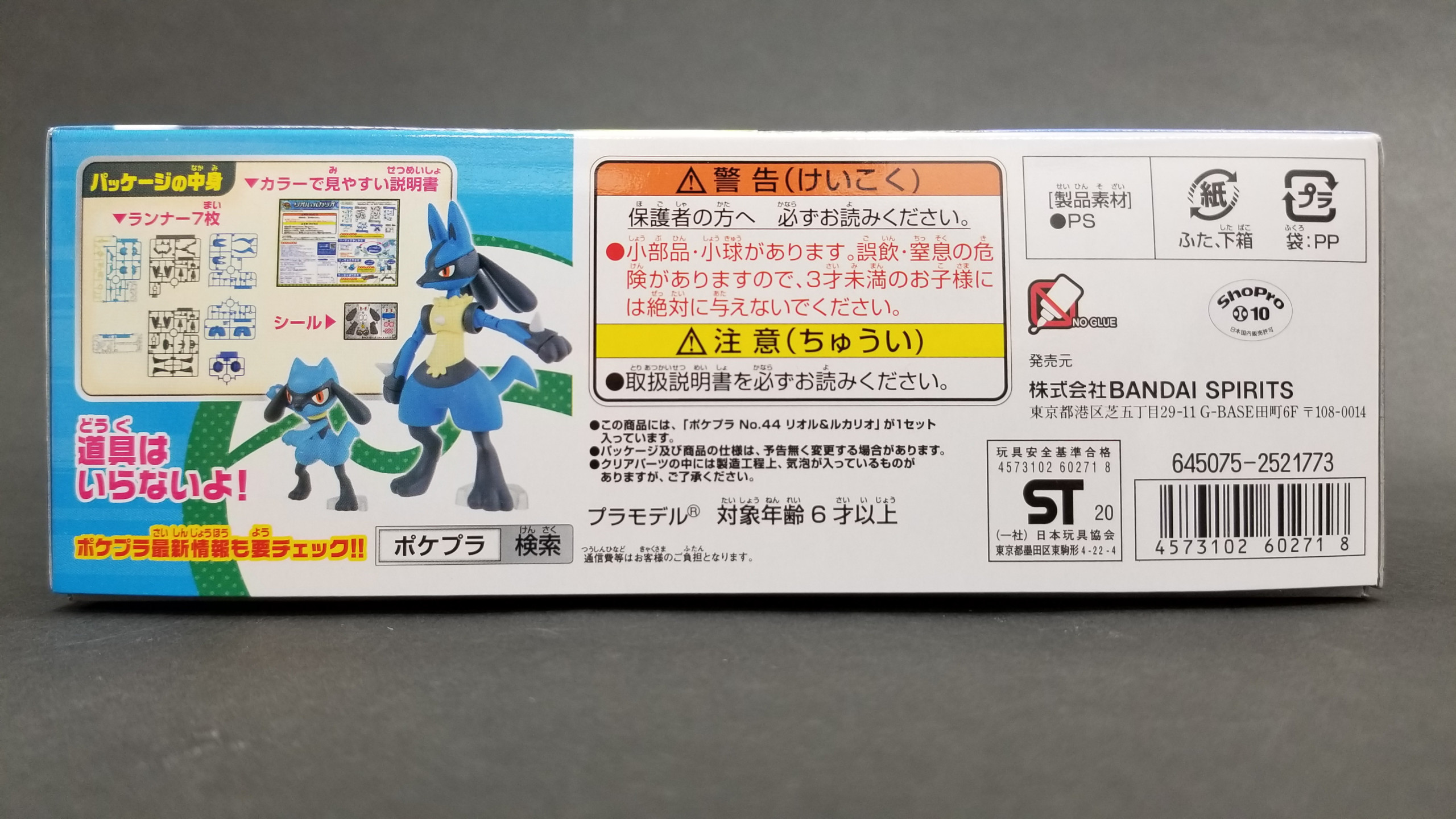 The other side of the box shows the runners and the full-color instruction booklet. Oh, and the stickers. Always with the stickers. 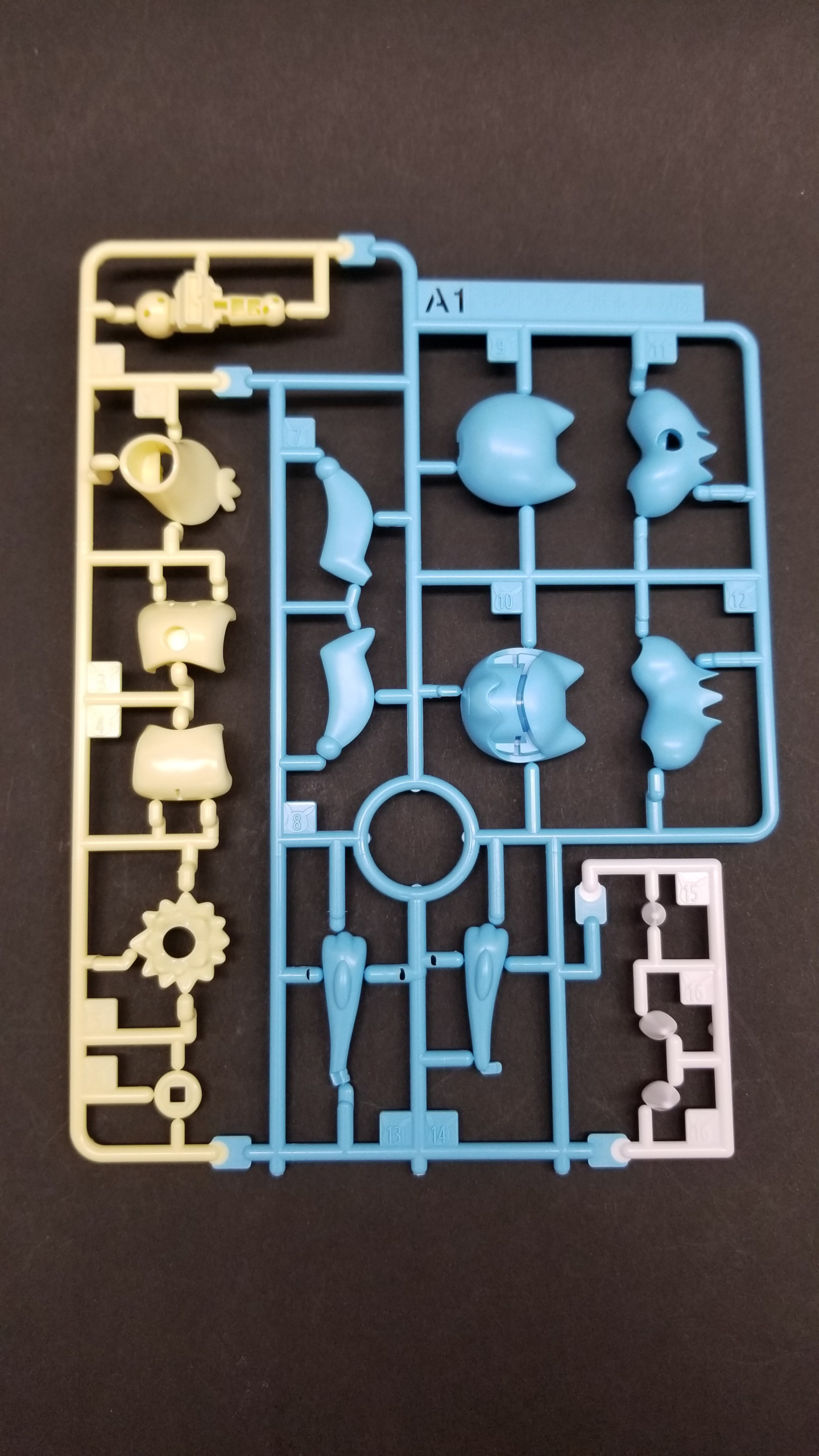 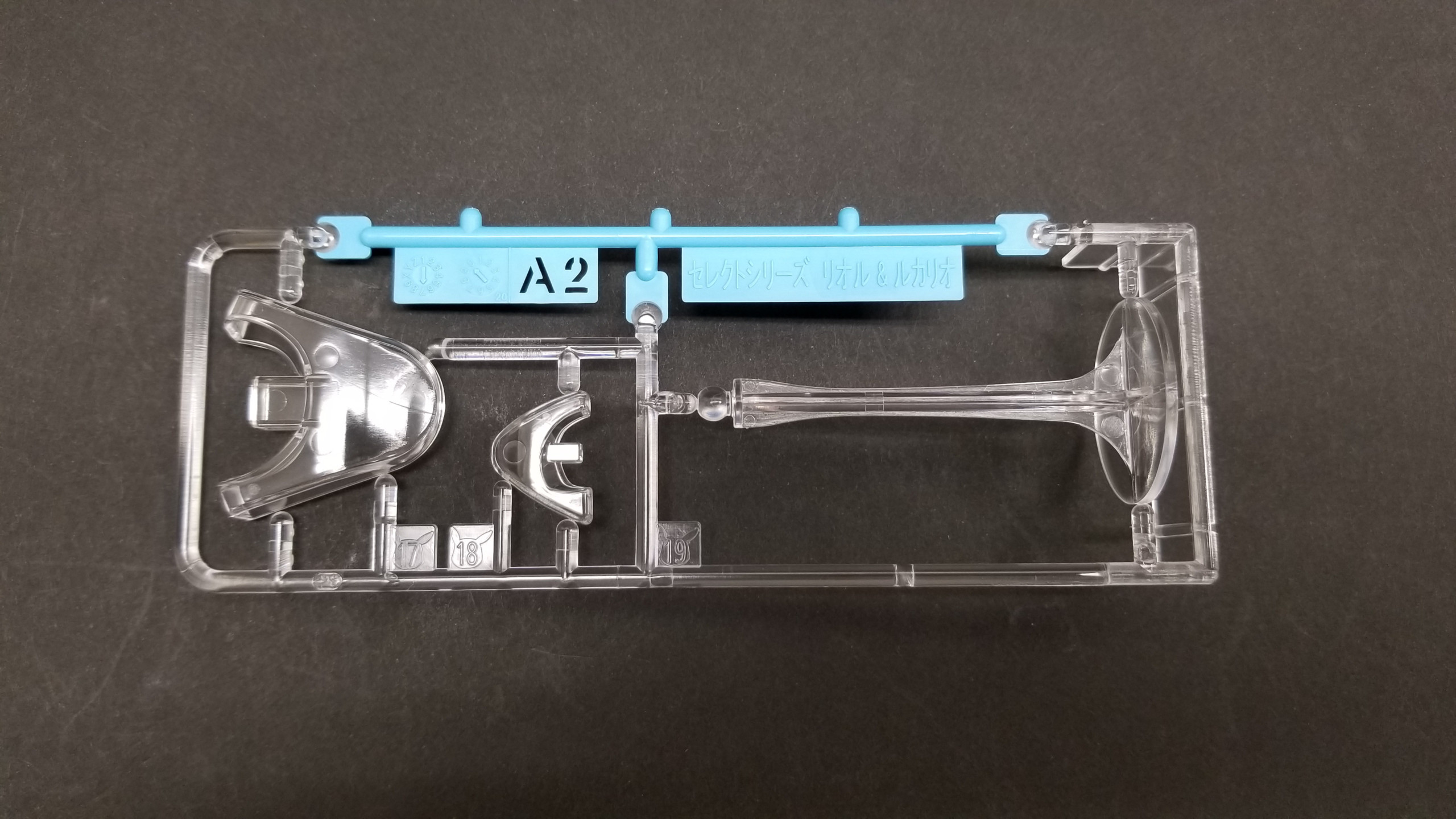 Stickers, with Lucario on the left and Riolu on the right.

Scroll back up to the Mega Lucario sticker sheet and just see how much an improvement this is!

Overall, the Lucario & Riolu Pokemon Plamo kit is a step in the right direction for Bandai catering to its older crowd of Pokemon fans. Though the kit is still set for ages 6+, the color separation and molding have come a long way from some of the other kits we’ve seen before.

And this is only the beginning. Bandai has two never-before Plamo’d Pokemon coming to the line in the near future, too: Gengar and Rayquaza.

Get your order in for this set here!:
– Pokemon Plamo Collection No.44 Select Series Riolu & Lucario