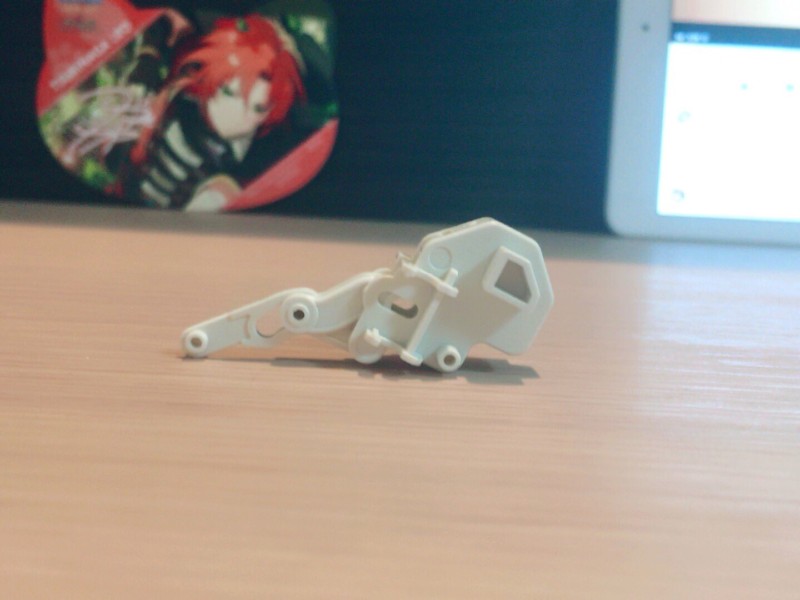 The first step to creating this legendary dragon was actually putting together a part that will fit in the inside of the body. It’s thanks to this ‘contraption’ that we’ll be able to make Reshiram’s wings flap and his head move. It’s a pretty important part of the kit, for how small it is!

You can see how the contraption fits inside one half of the body! 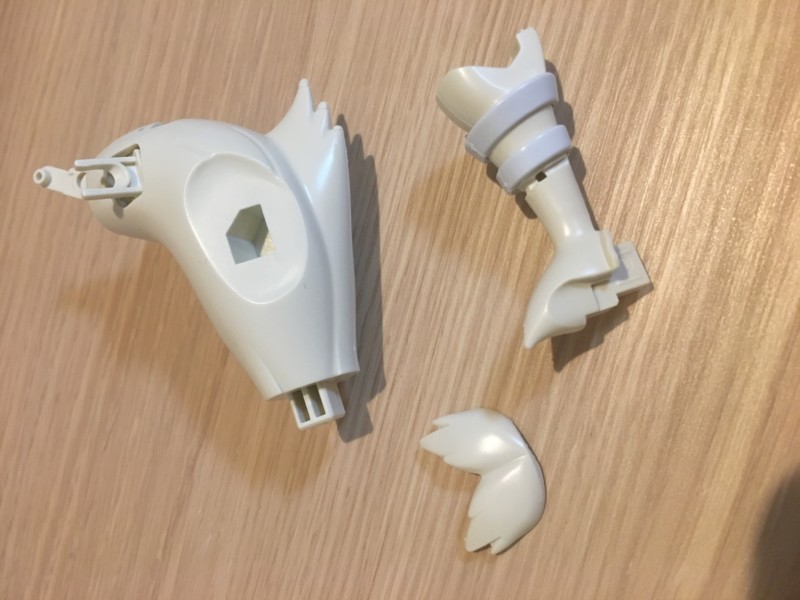 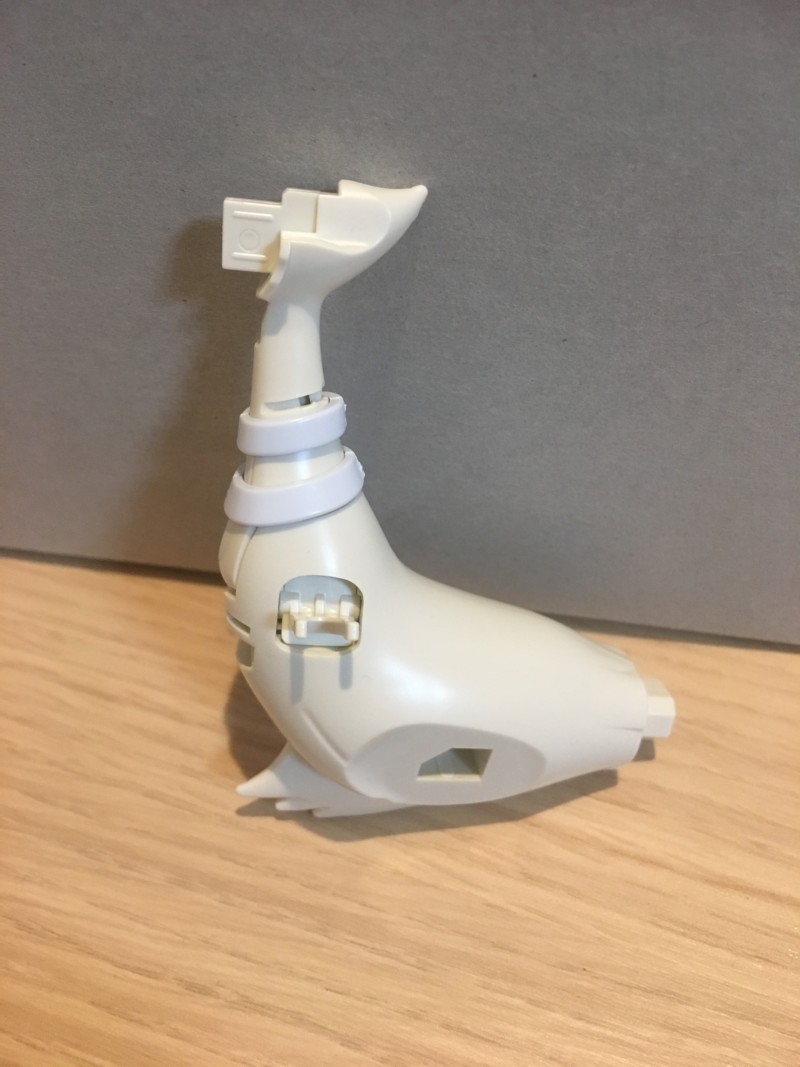 Looks a bit like a dismembered chicken, doesn’t it? Here’s the progress on Reshiram’s torso and neck. The rings around the neck were pretty satisfying to snap into place! Finally seeing that light blue against the off-white of Reshiram’s body was really nice. Also, you’ll see how the contraption from earlier fits into the body part; practically suspended inside. 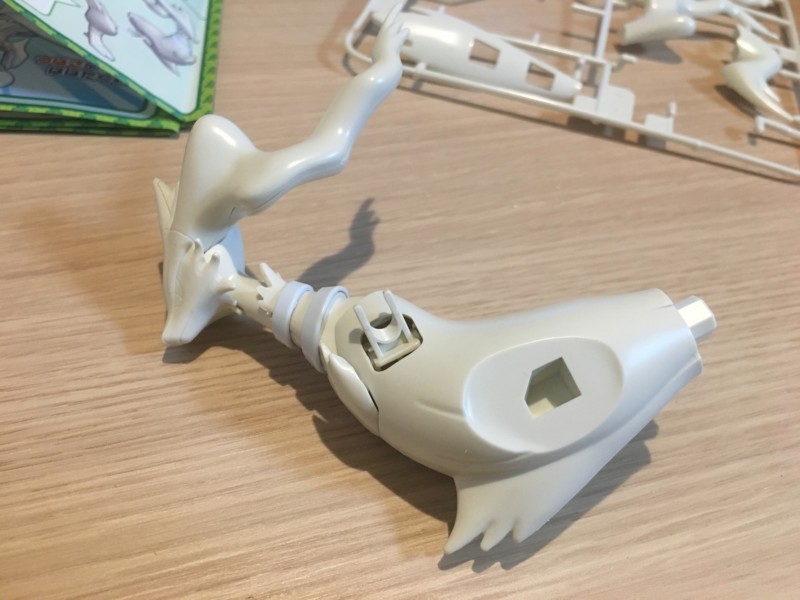 No longer a headless chicken! Hurrah! The face and head extensions were separate pieces but fit together like melted butter to a popcorn kernel. Don’t try to eat this, though! … Please laugh at my jokes, my loneliness is crippling. 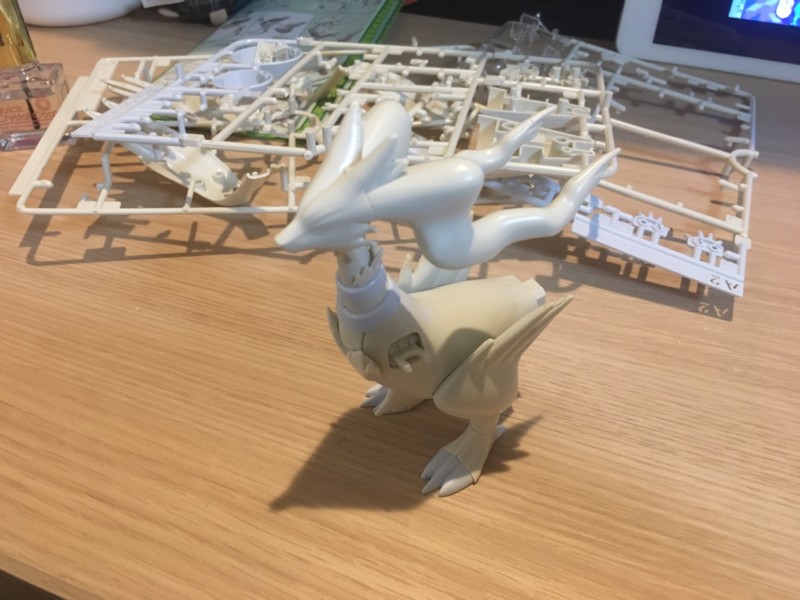 Could it be that it’s actually starting to take shape? You can see my mess of parts in the back thanks to my absurd lack of organization. The talons to the feet are actually that same pale blue that the neck rings have. I’d recommend being very careful with these parts, as I probably dropped the back talon at least five times before I connected it to the foot. We have a Japanese proverb here in japan that goes, “The wise hawk doesn’t show its talons,” but I think Reshiram looks better with them connected! I can deal with an unwise Reshiram any day! 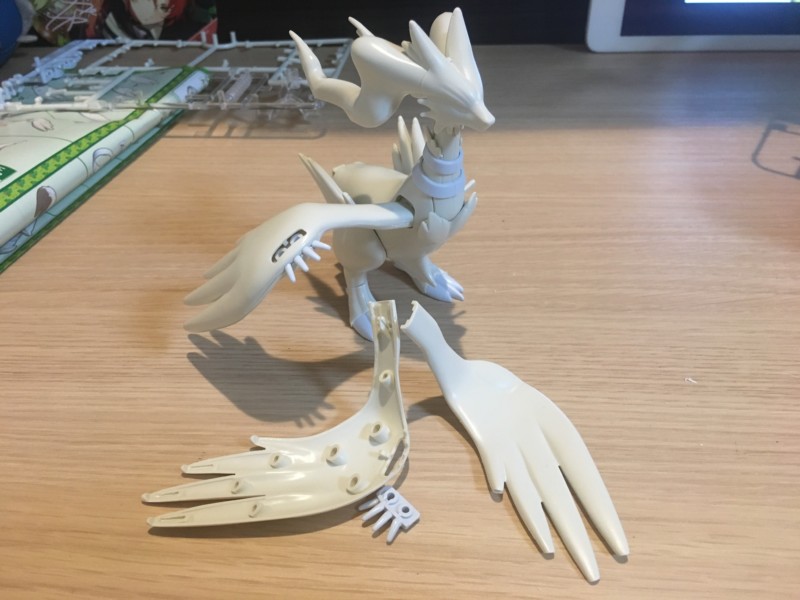 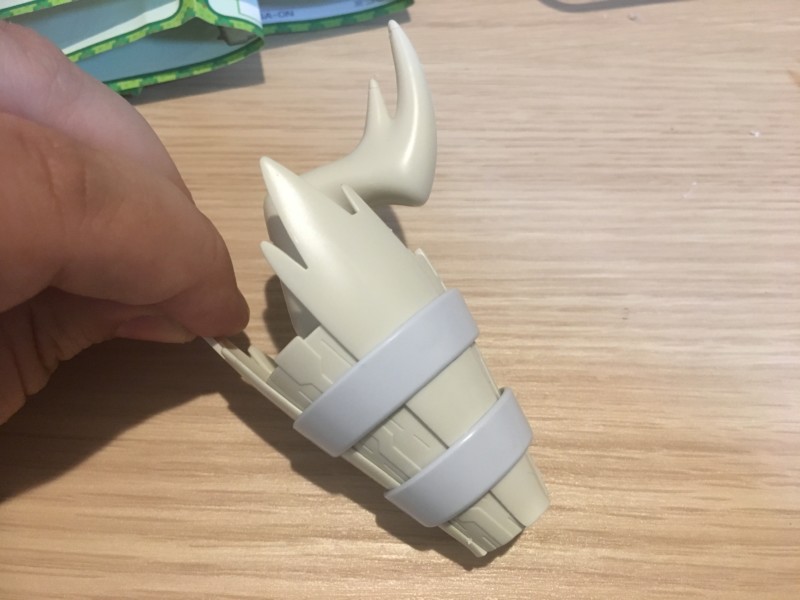 We’re basically at the last stretch of this leisurely build with the wings and tail. Both of these parts feature that light blue highlight from before. Both the wings and the tail posed two points of difficulty. The wings, despite my best efforts, never seemed to snap together neatly and completely. I double-checked everything was snapped off correctly, but the wings just didn’t want to work correctly. In the end, I think it looked okay. As for the tail, the rings were just a bit of a pain to smoothly fasten on. I wouldn’t say it was a deal breaker for the kit at all; rather, it just put a little buzzkill to my relaxing time building this kit. 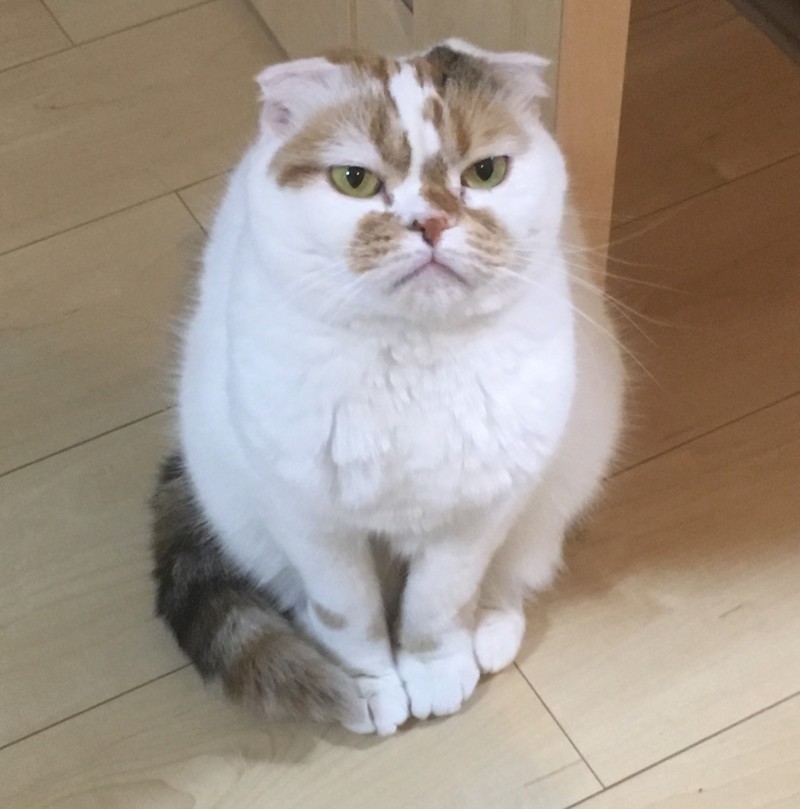 It was at this very moment that I noticed my cat had been watching me the entire time with a gaze that depicted nothing but the most crippling look of disgust I have ever witnessed. She was definitely not thrilled that I was paying more attention to bits of plastic than her fluffy butt. 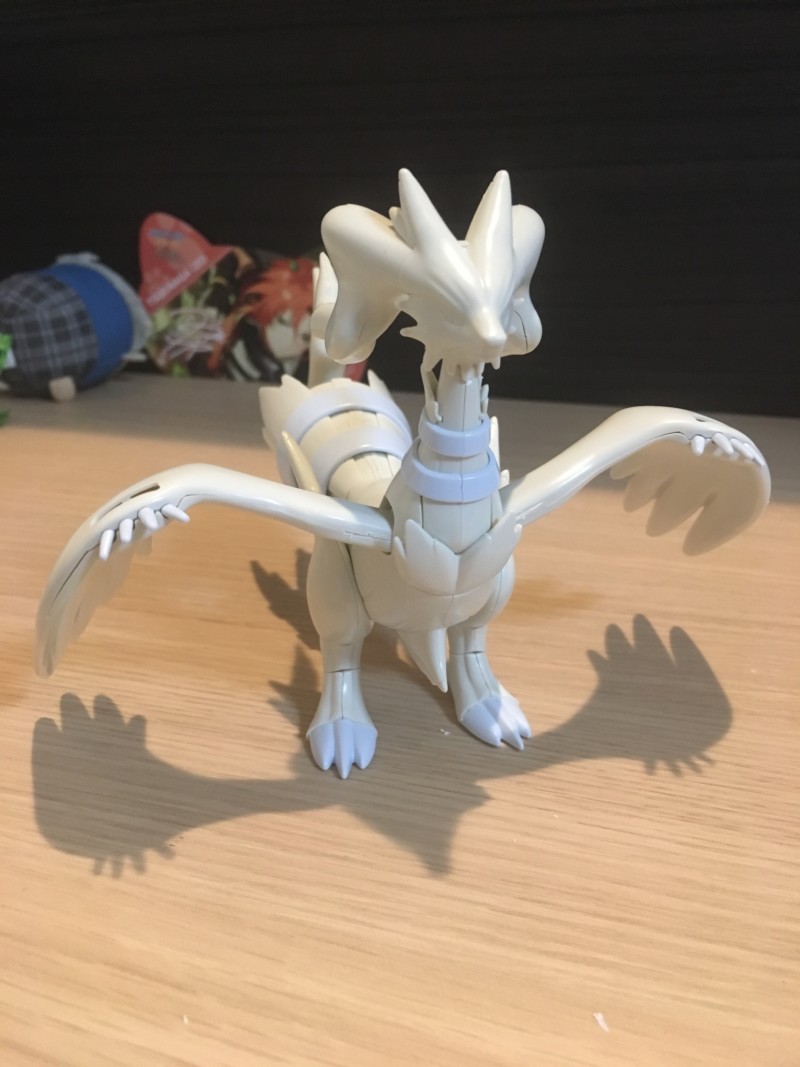 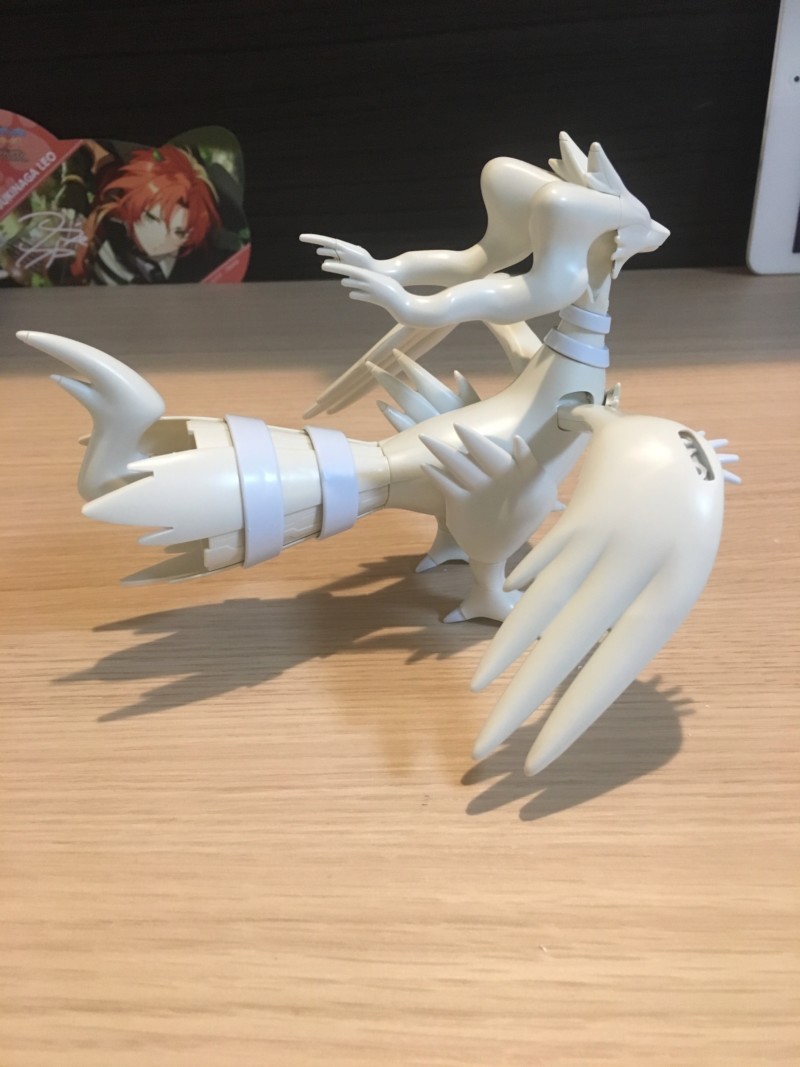 Ta-dah! It’s the vast white legendary himself, almost complete! I adore the shape of his tail – I think it brings a fluffy and cute charm to an otherwise strong and intimidating legendary dragon. 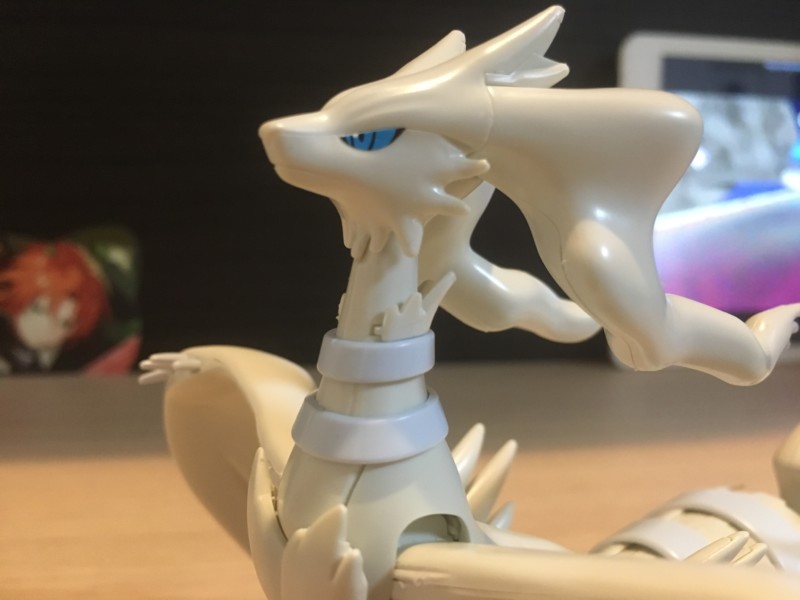 The only sticker decals included in this kit are the eyes, which is a good thing in my opinion. I always get a little nervous plastering them on. In this case, my hands couldn’t stop shaking with these tiny details that I was for sure going to attach it crooked. I took the liberty of using a pair of tweezers to help apply the small detail. It fell out of my hands about ten times before I gave up and surrendered to the tweezer method. The good news is, it worked out! 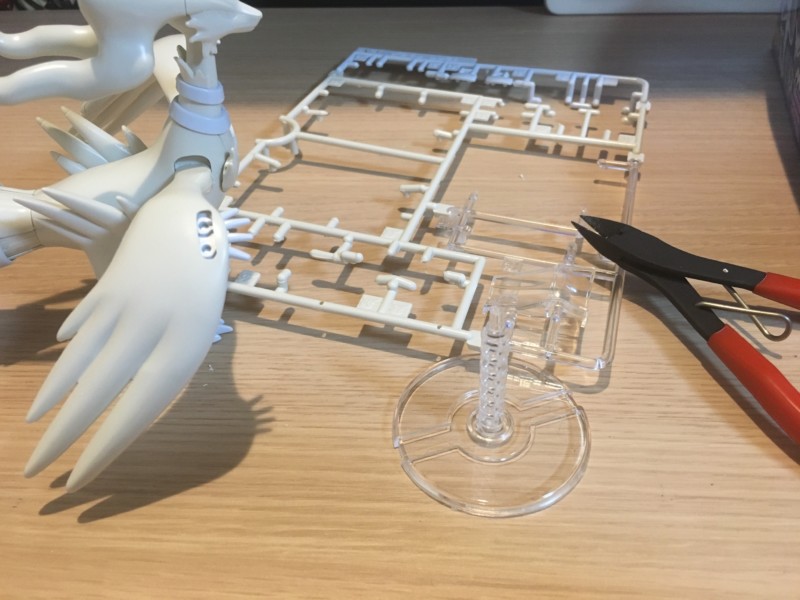 All that was left in the construction department was the included base! It’s a nifty sort of inclusion, and you’ll see why! 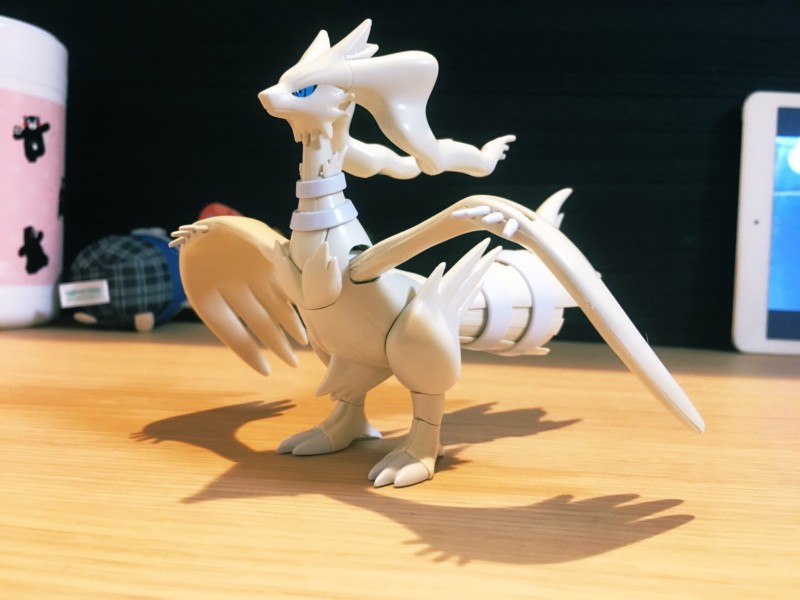 How majestic! Here’s the finished model! This is Reshiram in his default pose from the official artwork – it really echoes the original feeling of the Pokemon and I appreciate that. I think he’s gorgeous looking! 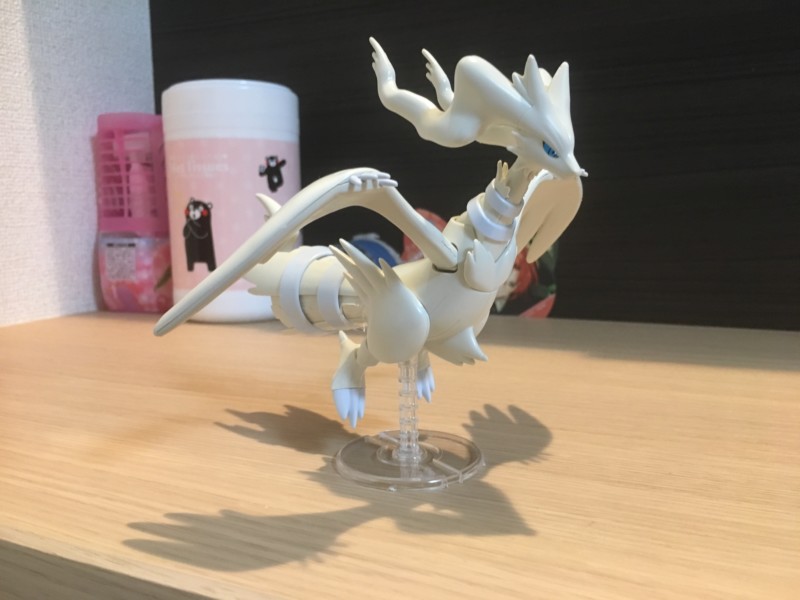 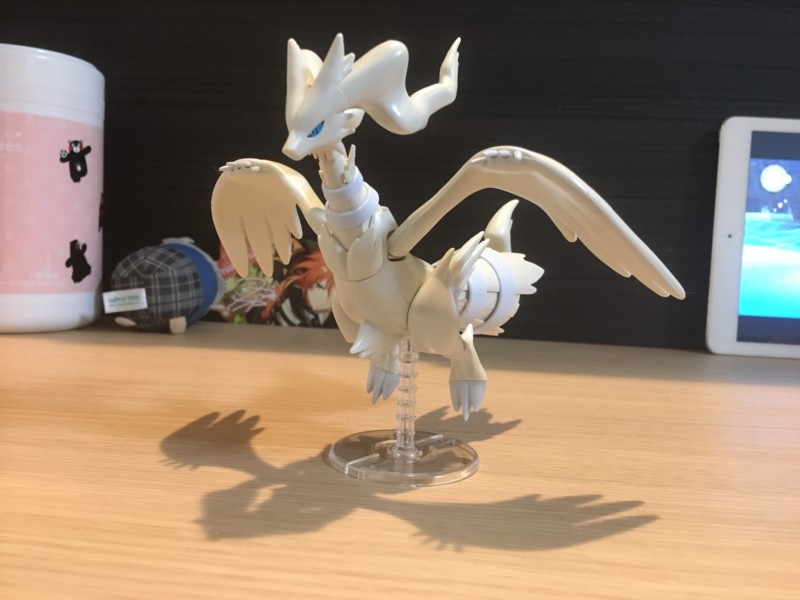 And, thanks to the included base and the ability to move Reshiram’s head and wings, you can actually put this beast into a fierce mid-flight-like pose for display! I really appreciate the small bit of diversity this model allows for display. I found myself playing around with the model well after completion!

And, what would Reshiram be without N to be shown off with him! Thanks for reading, folks!

Play In The Park With Chansey