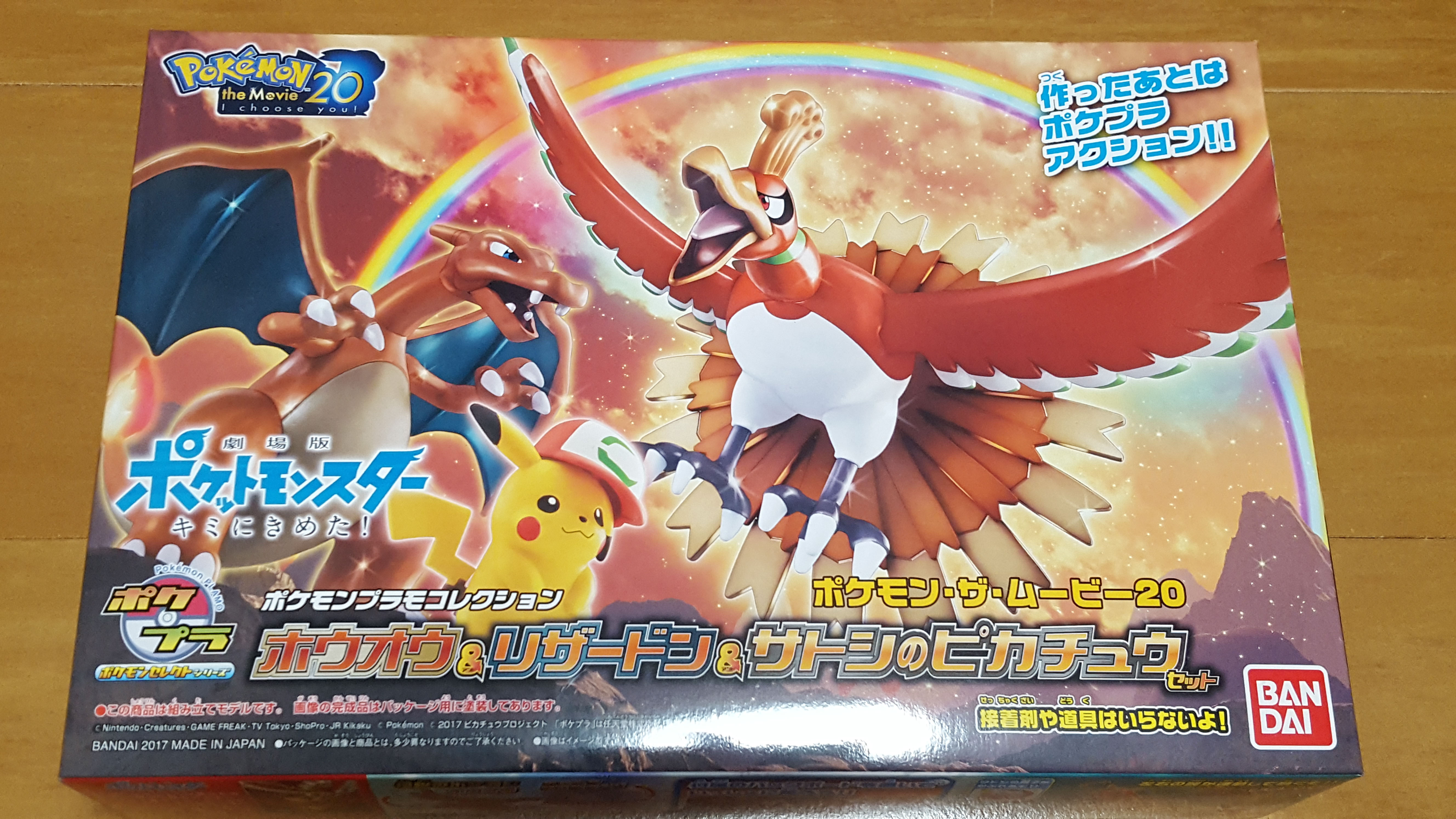 The Pokemon Plamo Collection Ho-Oh, Charizard & Ash’s Pikachu Set was released in July 2017 to commemorate “Pokemon the Movie: I Choose You!” With this kit, you get three Pokemon to build as the title suggests, and a backdrop to recreate a scene from the movie (if you’re wondering why this combination of Pokemon was chosen). 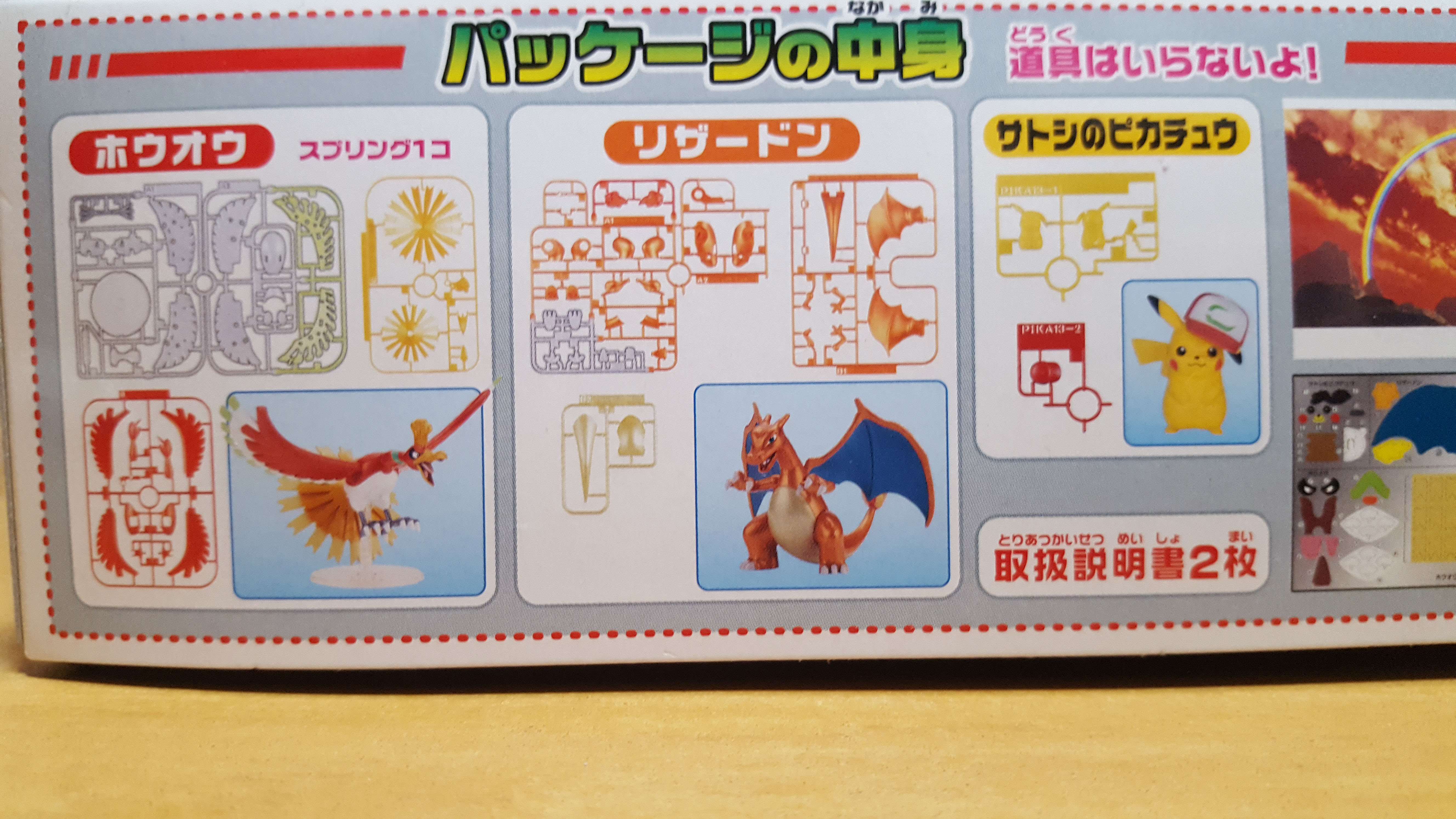 We start out with a breakdown of the kit’s contents, and can see that each monster is molded on runners of its own. I smell a reboxing… (According to Scalemates, the Ho-oh, at least, is indeed a reboxing of the 2009 model.)

The red text box on the side also notes that there are two instruction manuals — again, likely because Ho-oh’s is just a reprint from the old kit. The other side of the box shows off some gimmicks. Pikachu doesn’t have much going on, but Ho-oh’s and Charizard’s wings are rigged for movement. Charizard’s legs and head also move.

I photographed these in alphabetical order, even though there’s going to be some overlap in lettering because they originate from different kits. Here we go — 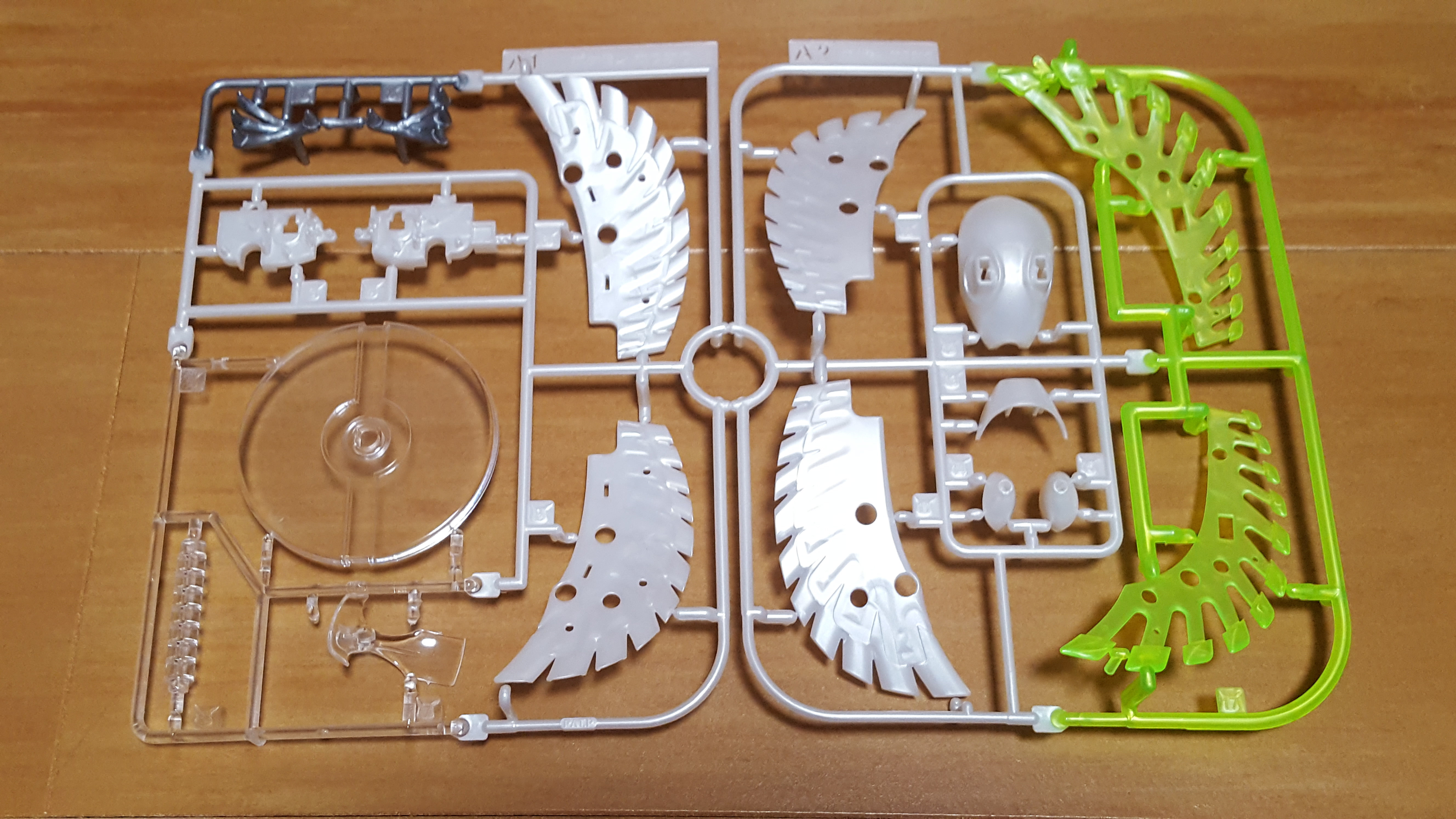 The first A runner has parts for Ho-oh’s wings, legs, and stand, and then some. The stand parts are clear, inner wing parts are neon translucent green, and other parts are white and grey. There’s a bit of a sheen on these parts and the plastic is… softer? than normal runners. Charizard’s A runner. This mostly has orange body parts with a significant metallic sheen to them, as well as white parts for feet and red fireball parts for the tail. Interestingly enough, though they’re all on the same runner, the red parts alone have a much softer, almost rubbery feel. They’re molded with glitter in the plastic, so it’s likely that a different kind of plastic had to be used to accomplish the look. 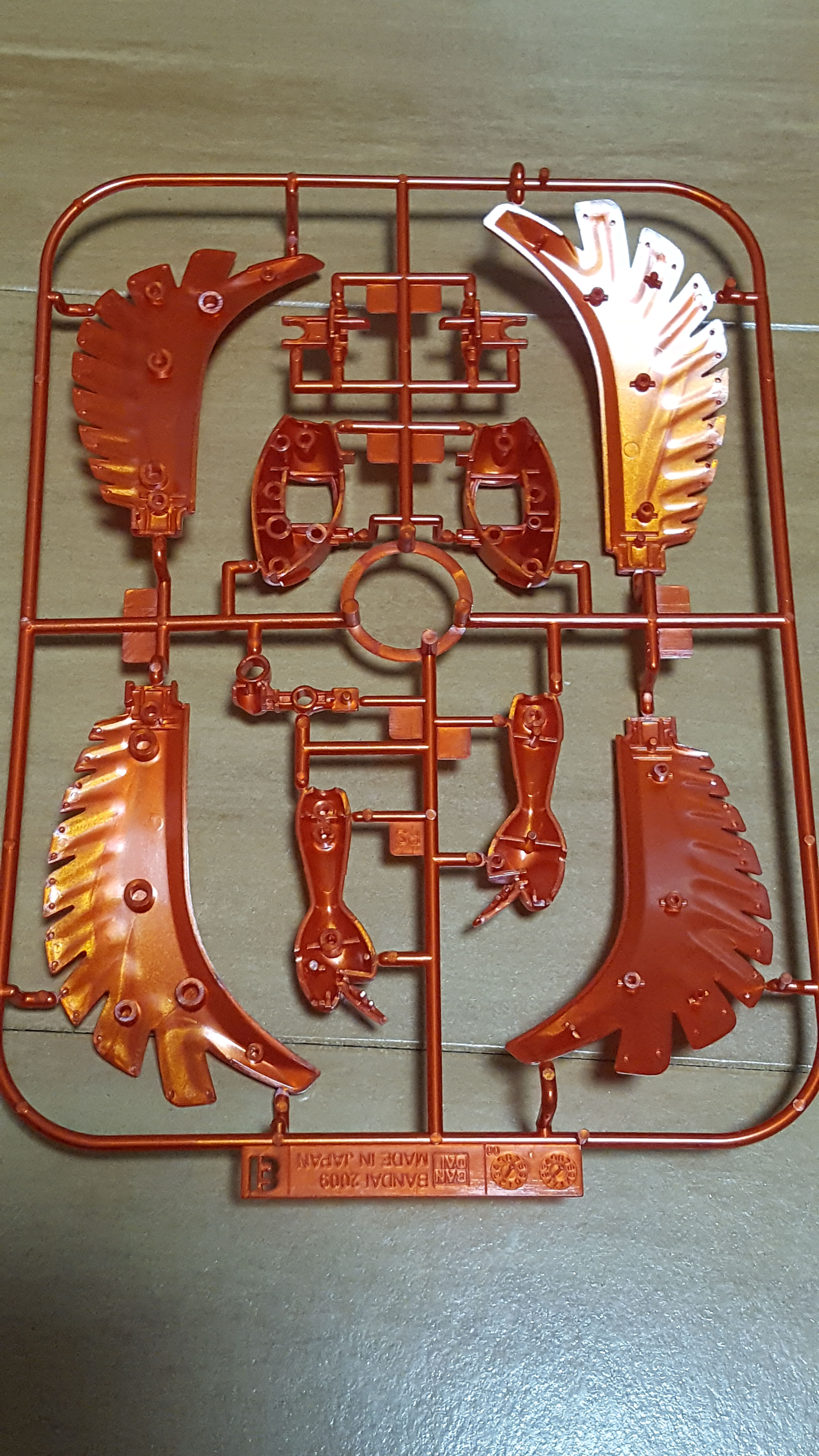 Ho-oh’s wings in red on the B runner. Fun note about this one: of all the runners in the kit, this is the only one where you really, really need nippers. The parts are very attached to the runners. Most of the other runners, though, are pretty easy to work with which is typical of the Pokemon plamo kits. More B runners for Charizard! The same orange as before appears here for wings, arms, and tail, and a similarly sheen-y pale yellow runner contains underbelly and tail parts. These two runners are the entirety of the Pikachu model. Four parts. Easy. 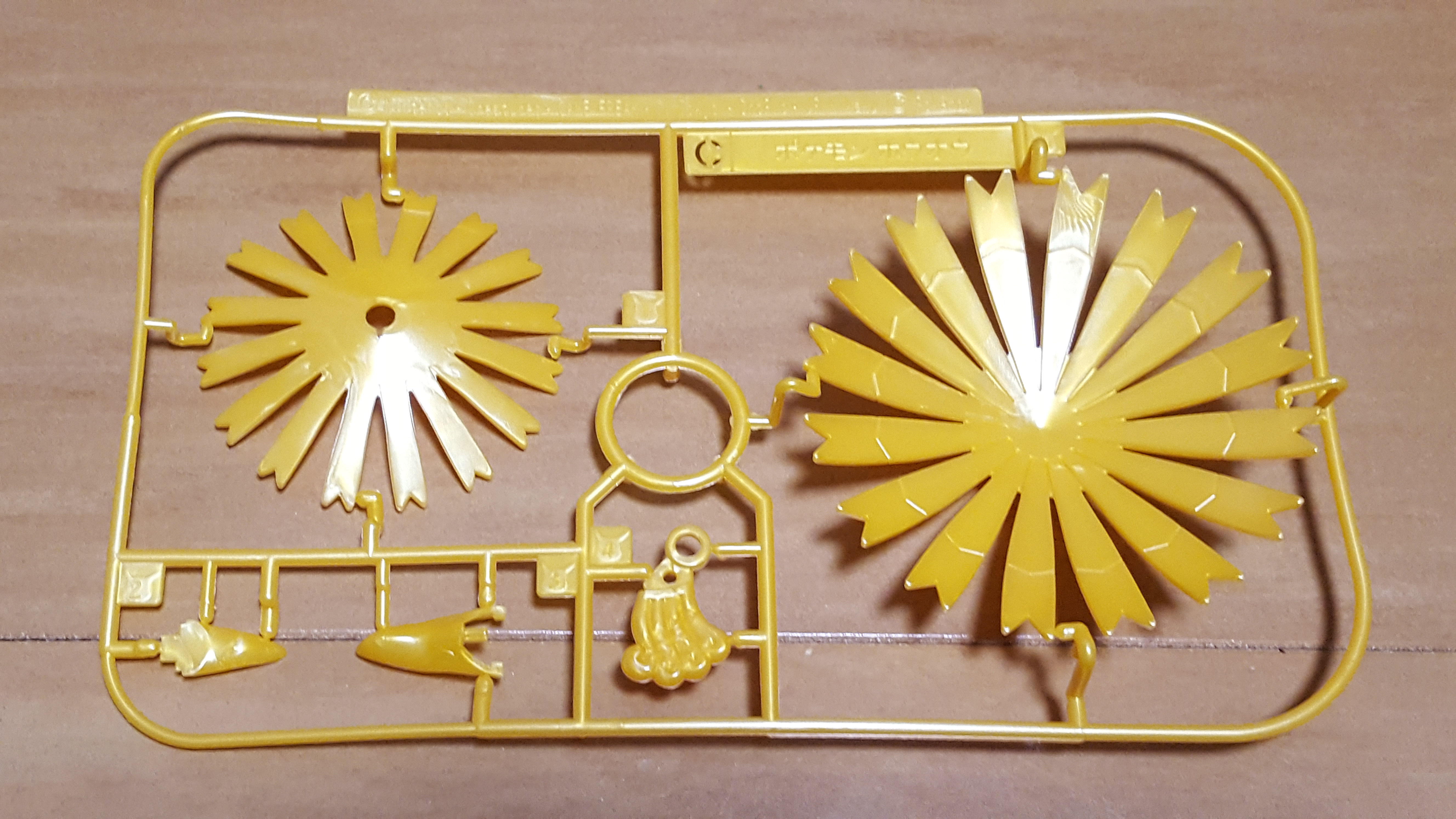 The C runner has Ho-oh’s tail, plume, and beak. These are in a somewhat softer plastic than usual, too. 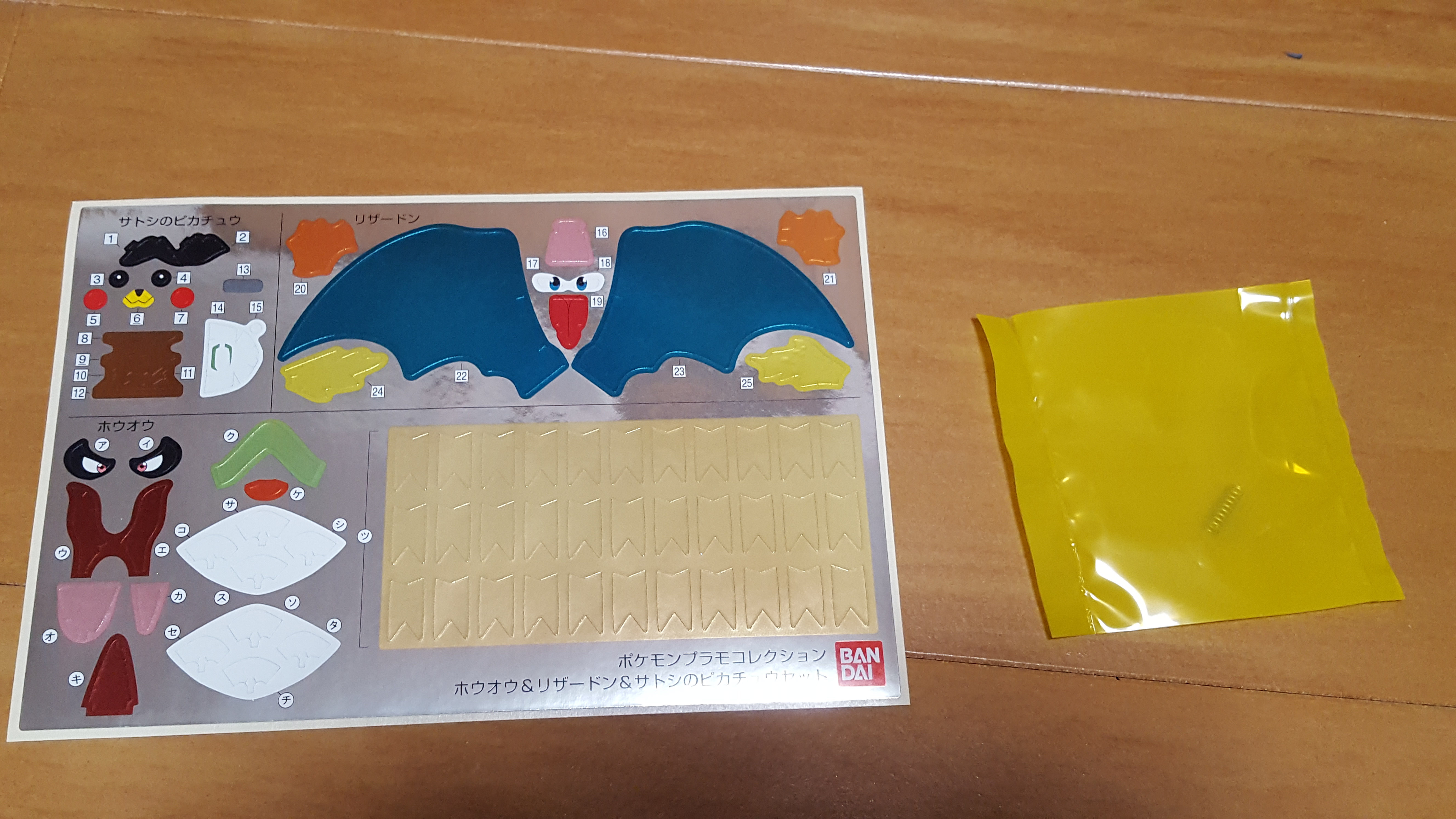 Oh dear, the stickers. At least compared to the last kit I worked on, these are small, simple detail stickers instead of huge, complicated stickers that you’re “supposed” to slap onto impossibly curved parts. I think I can work with these!

The bag on the right contains a spring that’s used for Ho-oh’s moving wings gimmick. 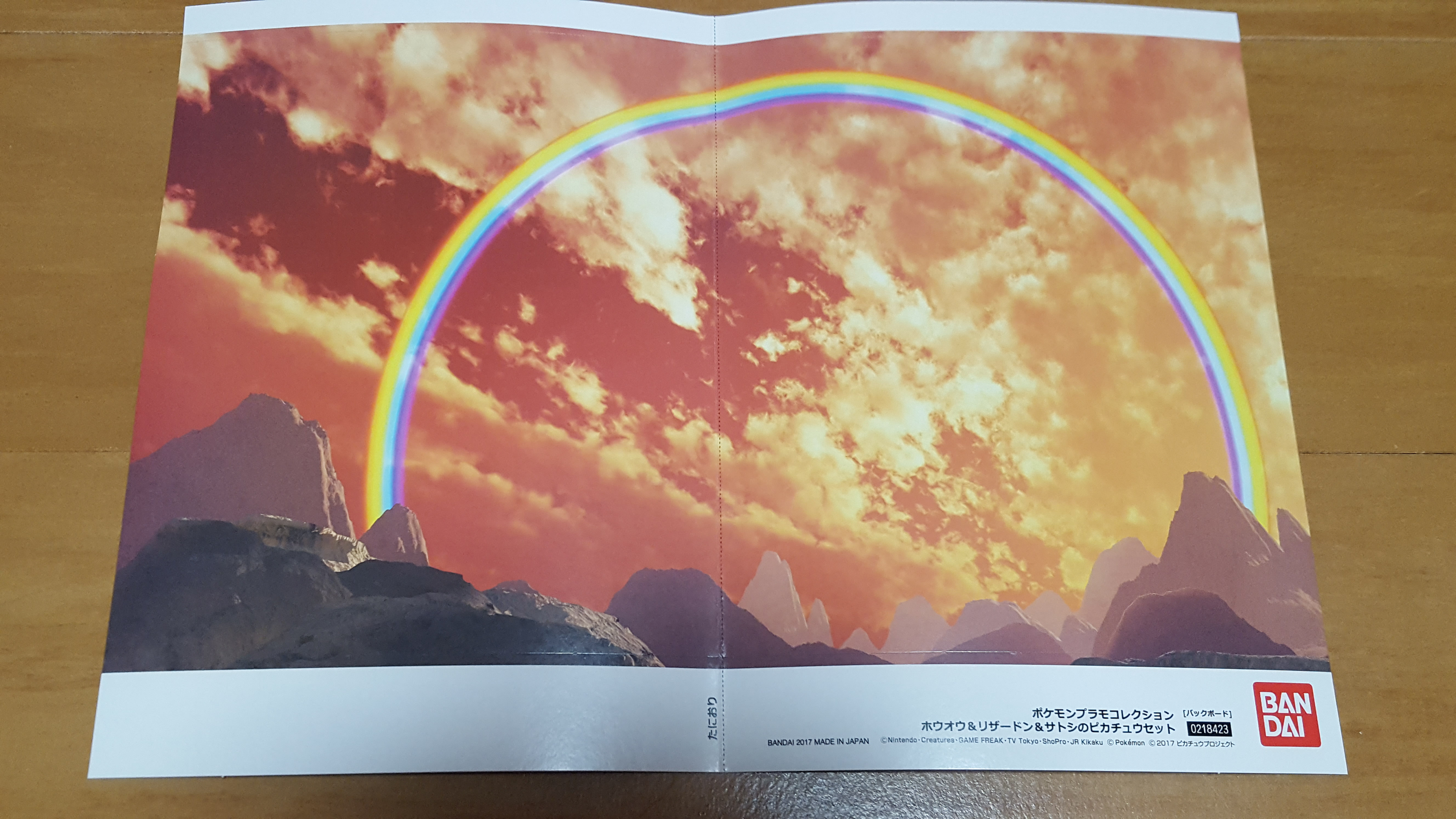 And here’s the background that’s included for photography and display! It’s sad that it’s folded right down the middle — it won’t look great in photos in my opinion unless you ‘shop that a little bit. But without folding it, it wouldn’t have fit in the box, so what can you do?

Stick around to see the build and completed models in my next post, and if you’re feeling this kit, pick it up for yourself here!