The Dragonite Evolution Set from Bandai was a building experience like no other I’ve had. It wasn’t hard; the kit doesn’t need any glue or paint (though it could do with some paint), and nippers are even sort of optional. The pieces pop off of the runners with relative ease. I did use nippers, myself, but the kit seems to be made for kids whose parents may not want them handling sharp tools. It makes the build more convenient, but those of us partial to nippers can still use them to our hearts’ content.

I don’t usually take all the pieces off the runners before building, but this kit has so few pieces that I thought it’d be neat to get them all laid out before starting. 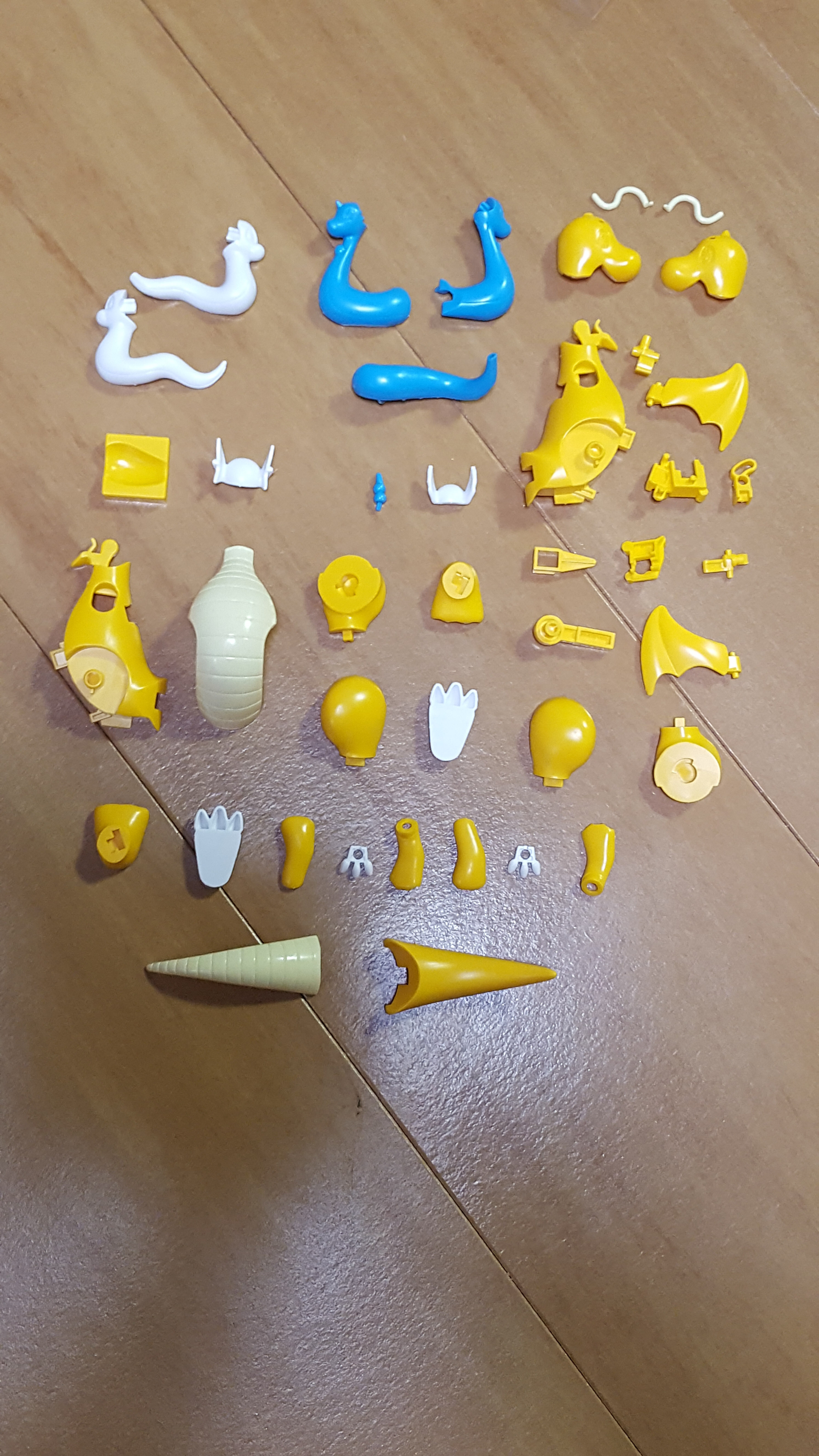 It’s clear that the most thought (and resources) has gone into Dragonite, and it’s looking like Dratini and Dragonair may have been more of an afterthought. I was really worried from the start about those solid-color bodies. 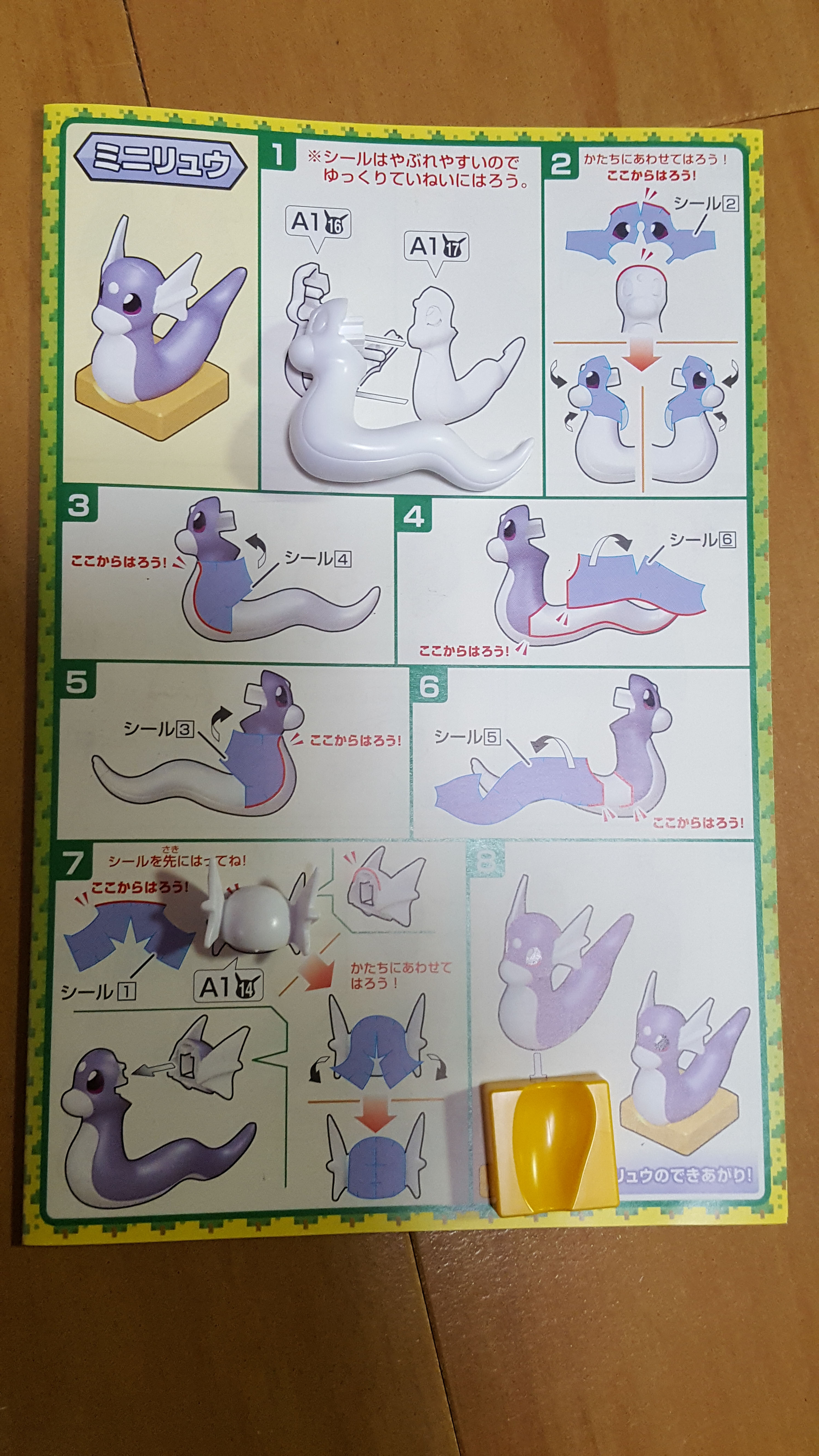 Dratini consists of 3 pieces (4 if you count the orange stand). I’ve laid out the completed body and other parts over the one-page, full-color assembly guide. Those stickers… yikes. 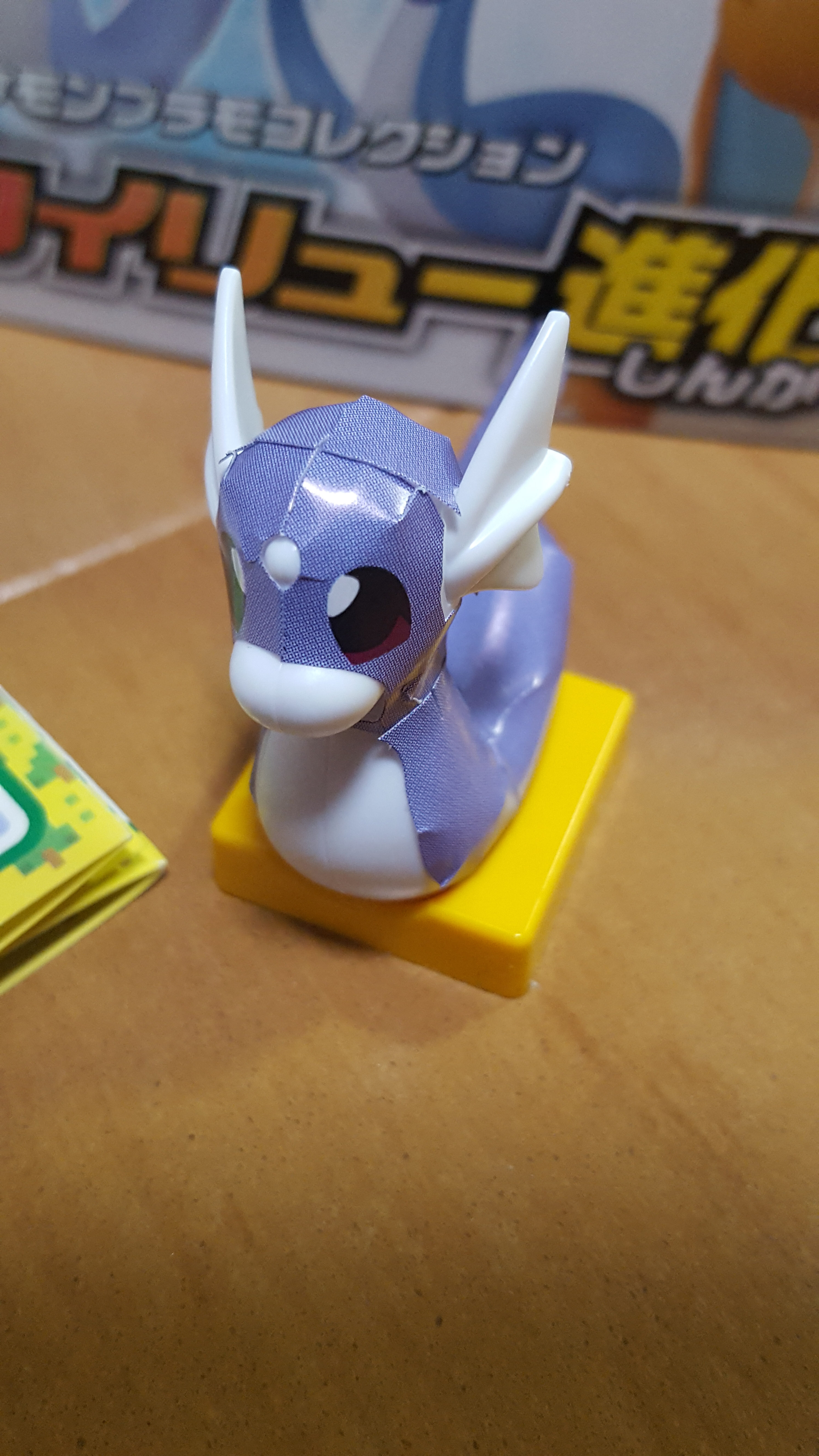 I want to say that all these stickers are meant to make the kit easier for kids. But even as an adult with experience building models, I couldn’t get these way-too-complicated stickers to go on neatly and to line up right. Dratini is really in desperate need of paint, or a reissue from Bandai with more mold colors because this… is not great. 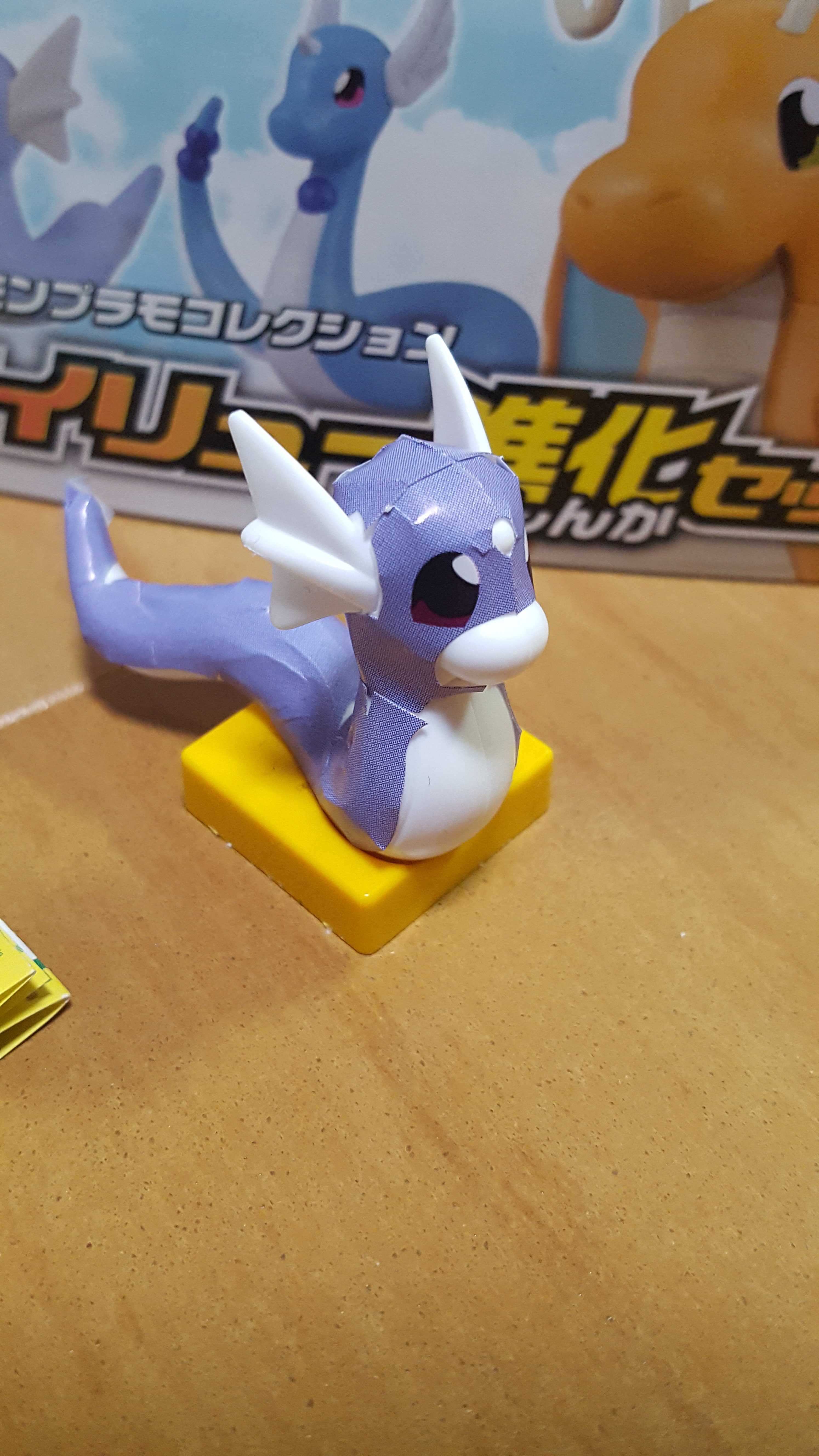 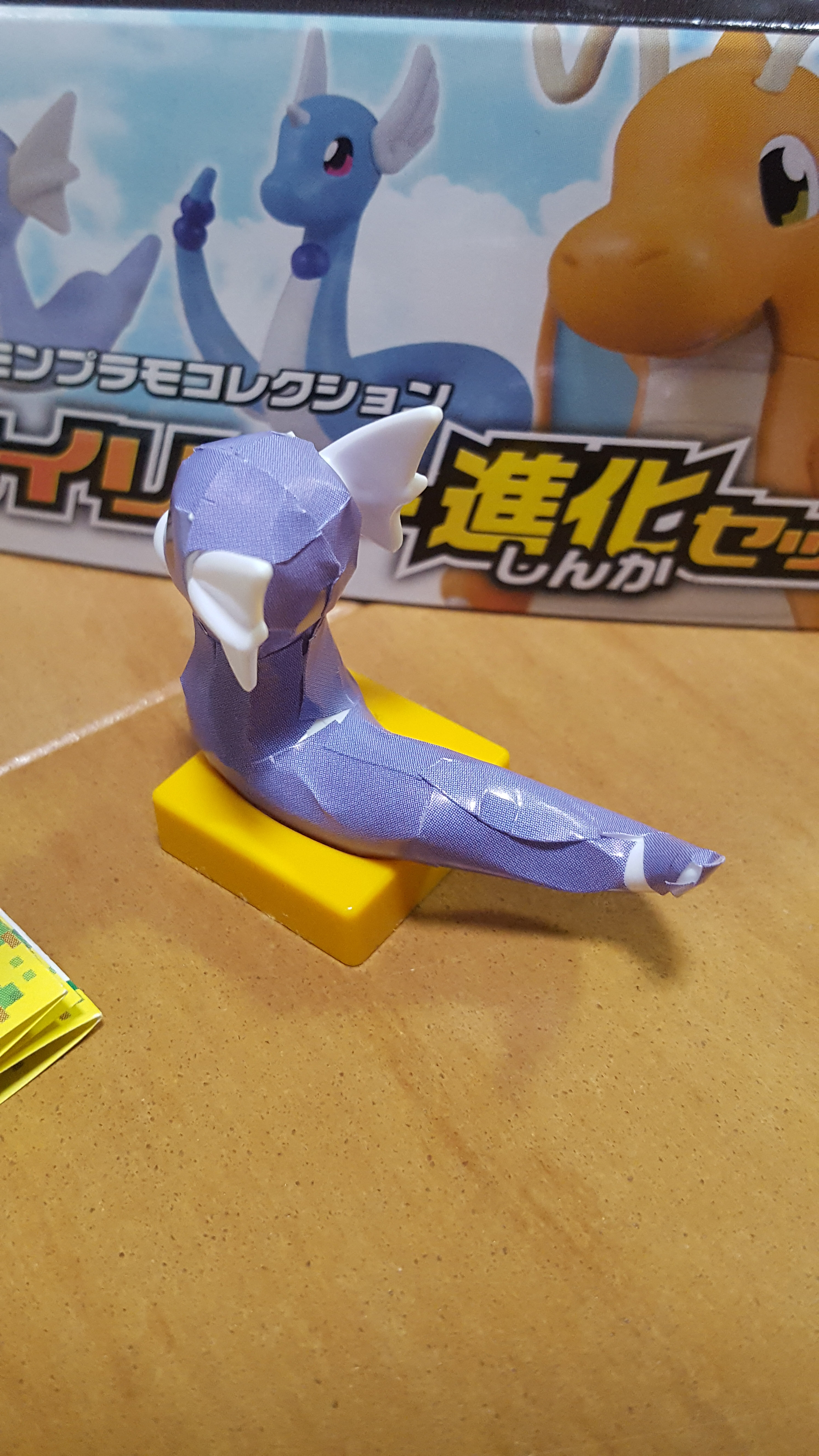 Moving on from that mess, we have Dragonair. Again, I’ve laid the pieces out over the guide. Dragonair has 5 pieces, almost all of which are molded in blue. And we can see that there are going to be even crazier stickers on this one. 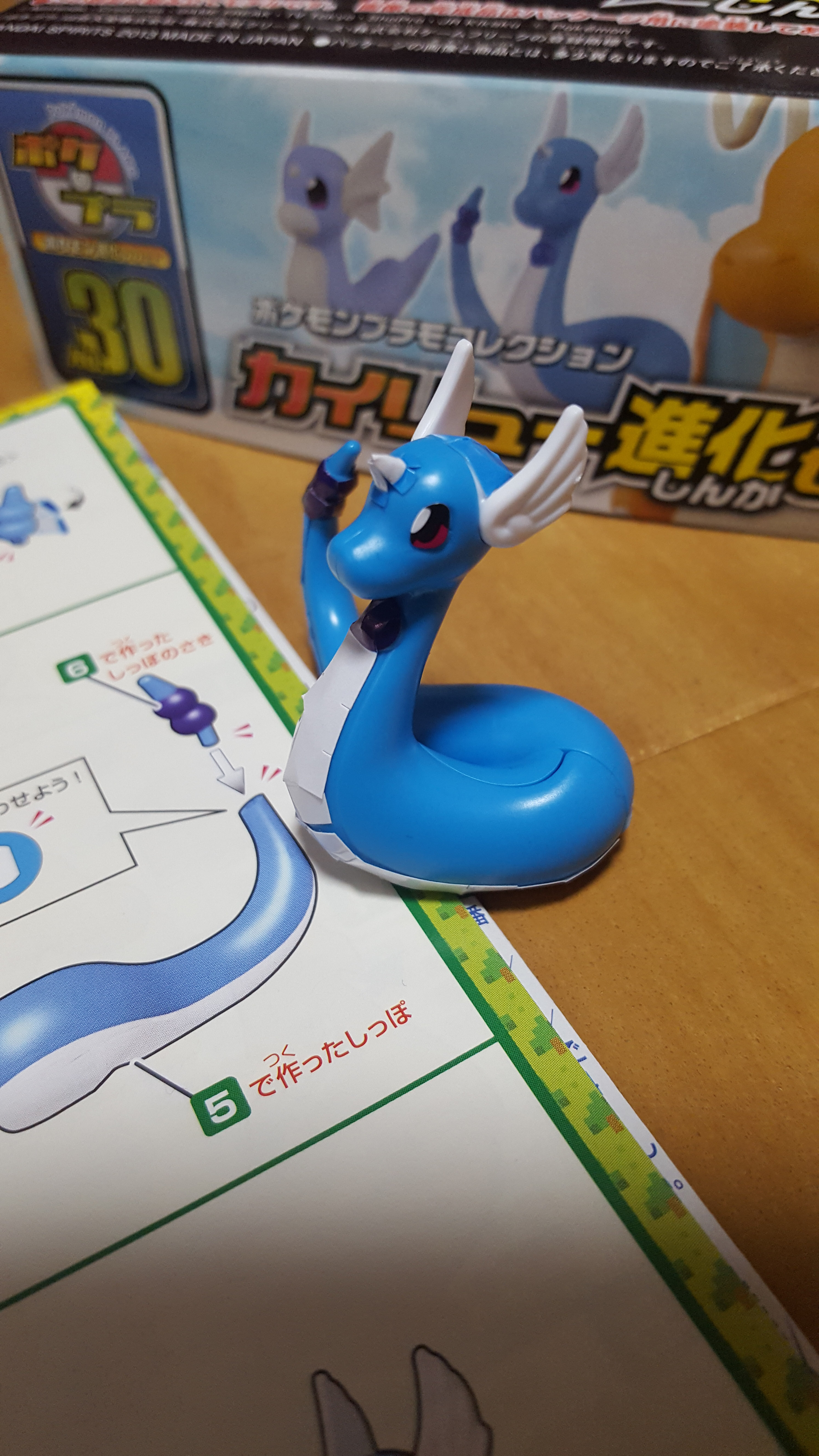 I can’t say it looks great from the front, but it’s better than Dratini. I feel like the horn could really easily be painted — that sticker was one of the hardest to apply. The “rattle” on its tail would be better off with paint, too, and shouldn’t be too hard for anyone to handle even with little painting experience. Even a sloppy paint job would look better than this sad sticker blob. The assembly guide is a liar. I don’t even want to talk about the bottom. Let’s move to Dragonite. 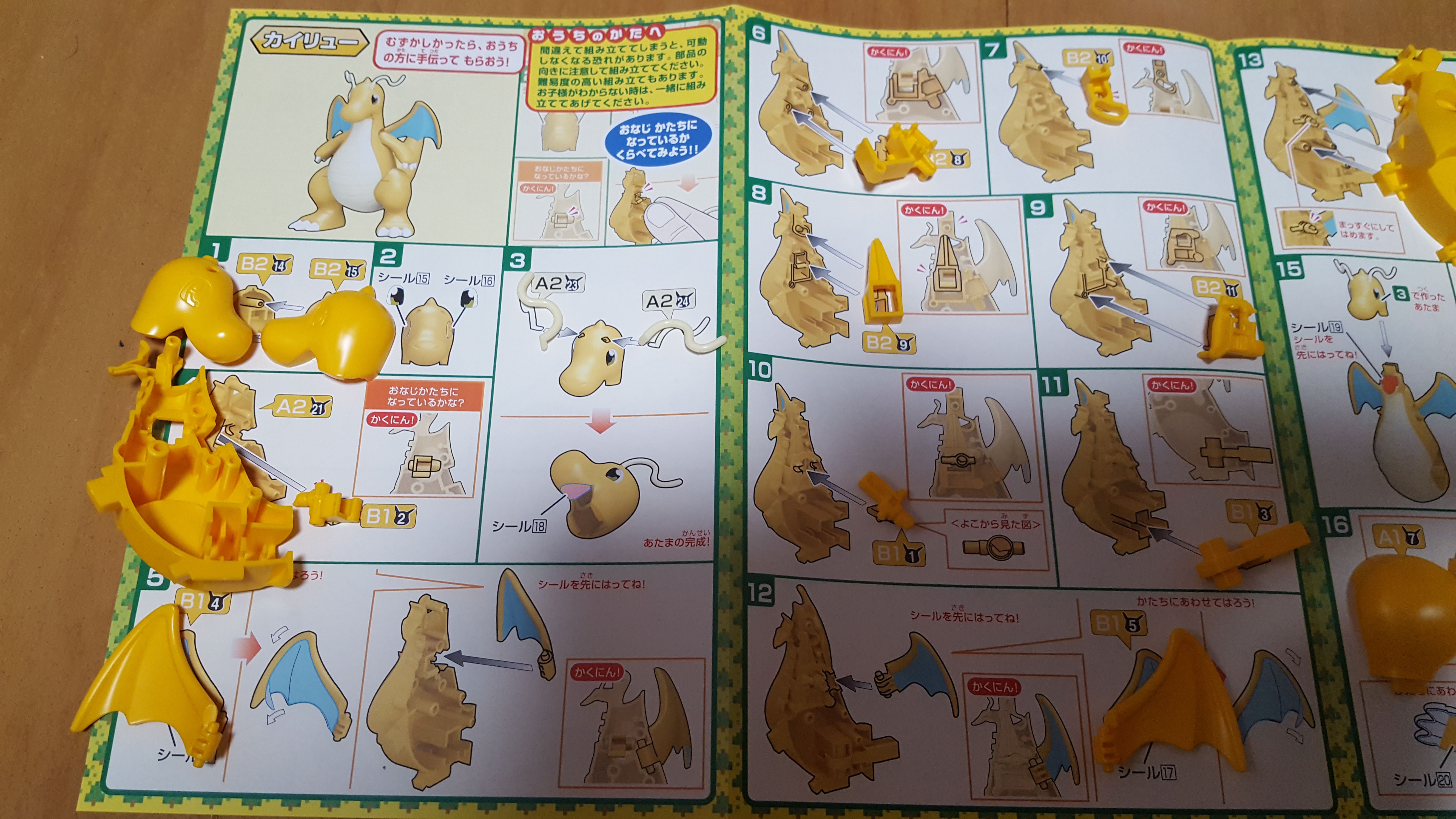 Because Dragonite has the most parts and most care put into its creation, there are fewer stickers, too. Bandai could have made the whole chest and tail sections stickers to save on molding just 2 parts in beige, but they didn’t skimp here and at least we have that. Dragonite is the centerpiece of this kit, anyway, so I suppose as long as it turns out alright we can’t complain too much.

This kit only costs a little under 700 yen, so for the price… I guess you get what you pay for. Here’s our completed Dragonite! Not bad, really. The legs and wings move freely, and the arms and mouth are linked so when you move the arms, the mouth opens and closes. The stickers went on fairly well, too. One thing to point out: be careful with the wing stickers. If you just slap them on, you’ll lose the crease detail in the middle of the wing. I was careful to push the sticker around the crease to get it to show, but it’s easy to miss that.

Another point I liked (though not shown) is that Bandai provides stickers for the bottom of the feet — a part of the kit you’re not going to be looking at often. Instead of leaving the white parts as they are, the stickers add orange and toe details. It’s just nice to have that little extra bit of attention given to otherwise hidden parts of the kit.

Overall, it’s safe to say that the stickers do not make this kit. For kids, it may not be so bad, but for anyone even remotely comfortable with a brush, I would recommend getting the paint ready. It’s not a bad kit mold-wise if you toss most of the stickers and take to painting it yourself. We just might see if my Dratini and Dragonair can be salvaged with paint… 🙂

If you want to try your hand at this evolution set, you can pick one up here:
– Pokemon Plamo Dragonite Evolution Set

And be sure to post photos of your finished models so I can see what else you can do with it!