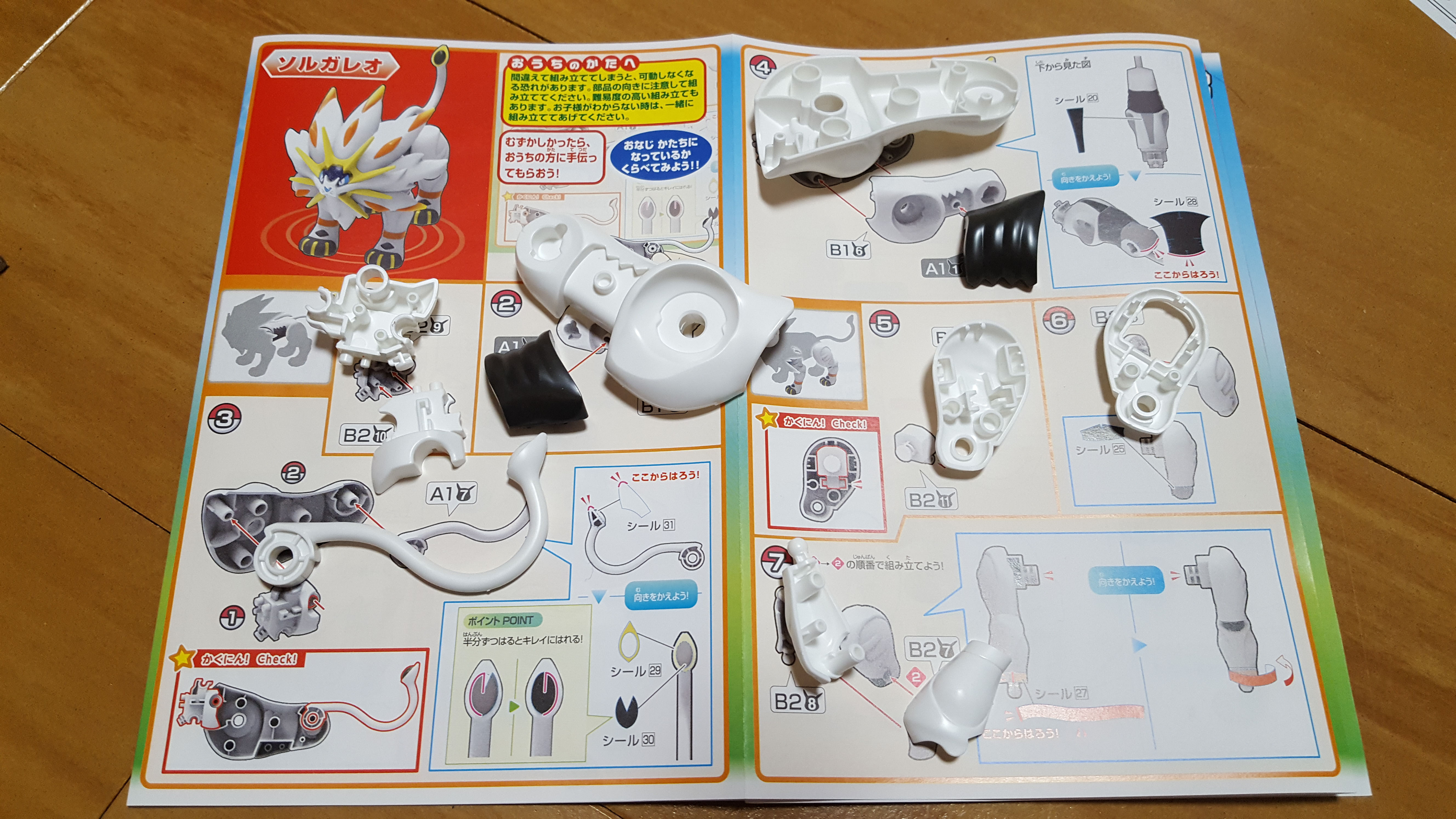 Solgaleo consists mostly of white parts, so it looks like it’s going to take some paint (and/or stickers) to get those color accents you can see in the box art. The sticker sheet itself isn’t that big, though, which is promising. One thing I’ve learned from these Pokemon kits is that even with a lot of stickers, a kit can look pretty good if they’re mostly small detail stickers rather than big sticker sections.

Anyway, here’s the first two pages to see how we’ll be getting started! 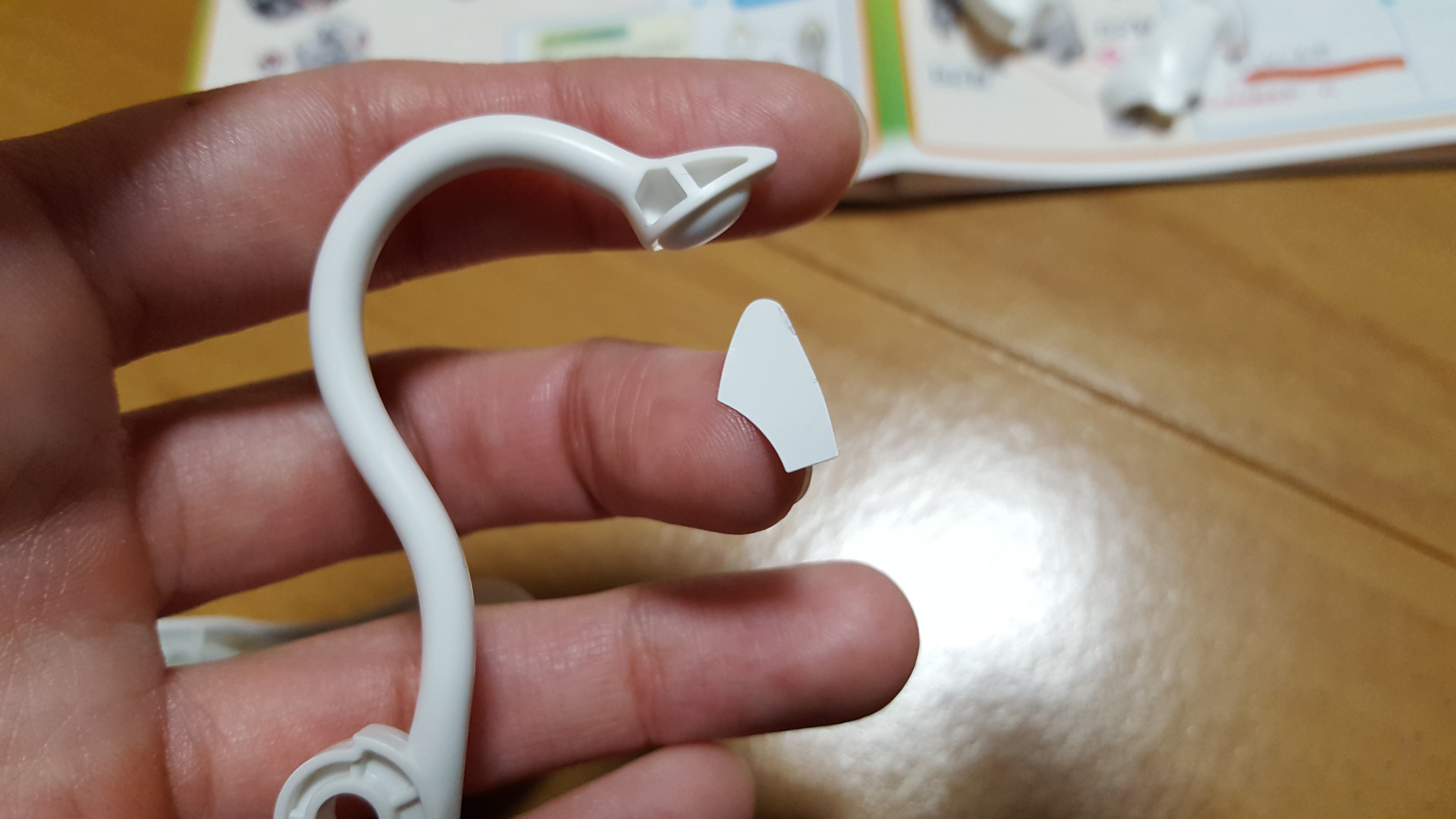 I’ve seen this kind of molding on two kits so far. On Yveltal, it actually worked to the model’s advantage, because the gaps and ribs beneath the sticker added a ribbed texture to the piece with the sticker applied. In this case, though, the other side of the tail is identical but filled in with plastic instead of a sticker — and there’s no rib. It looks a bit strange to have this only on one side of the tail, to be honest. 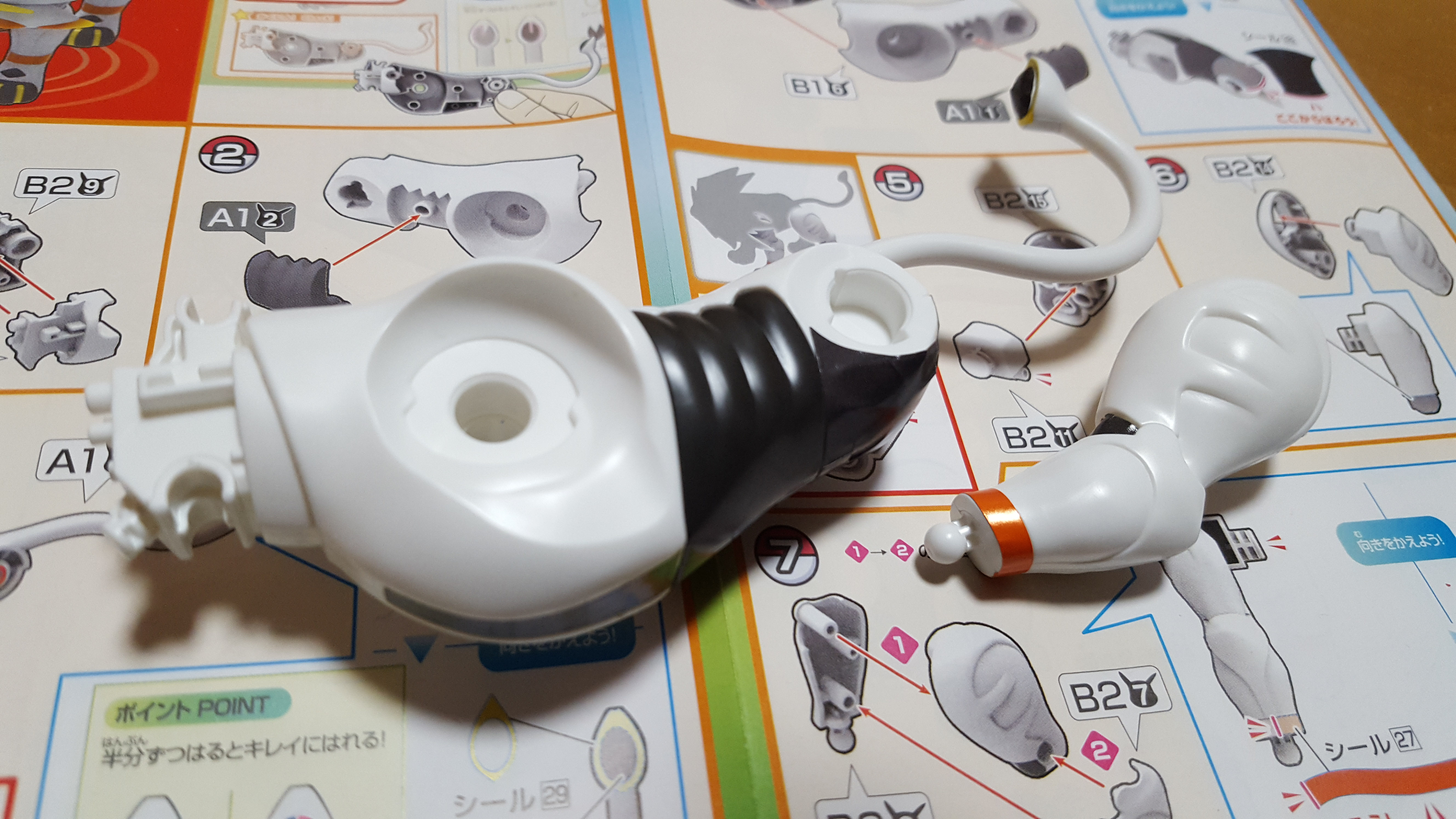 Here’s what we’ve got after the first two pages are done: the torso with tail and part of a leg. I appreciate the molding of the black parts here, giving us some nice color without stickers! 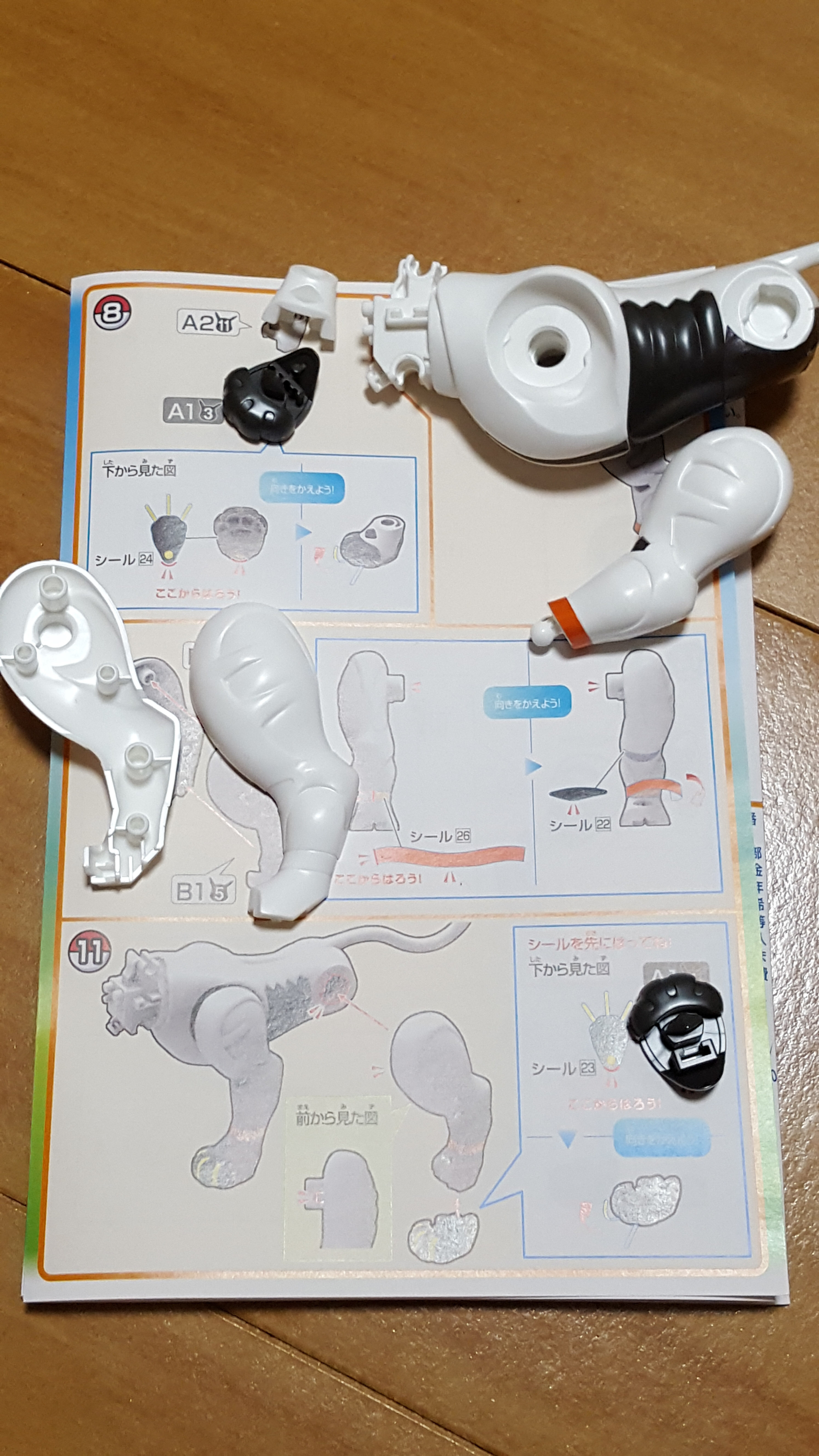 The next page. On to the legs! 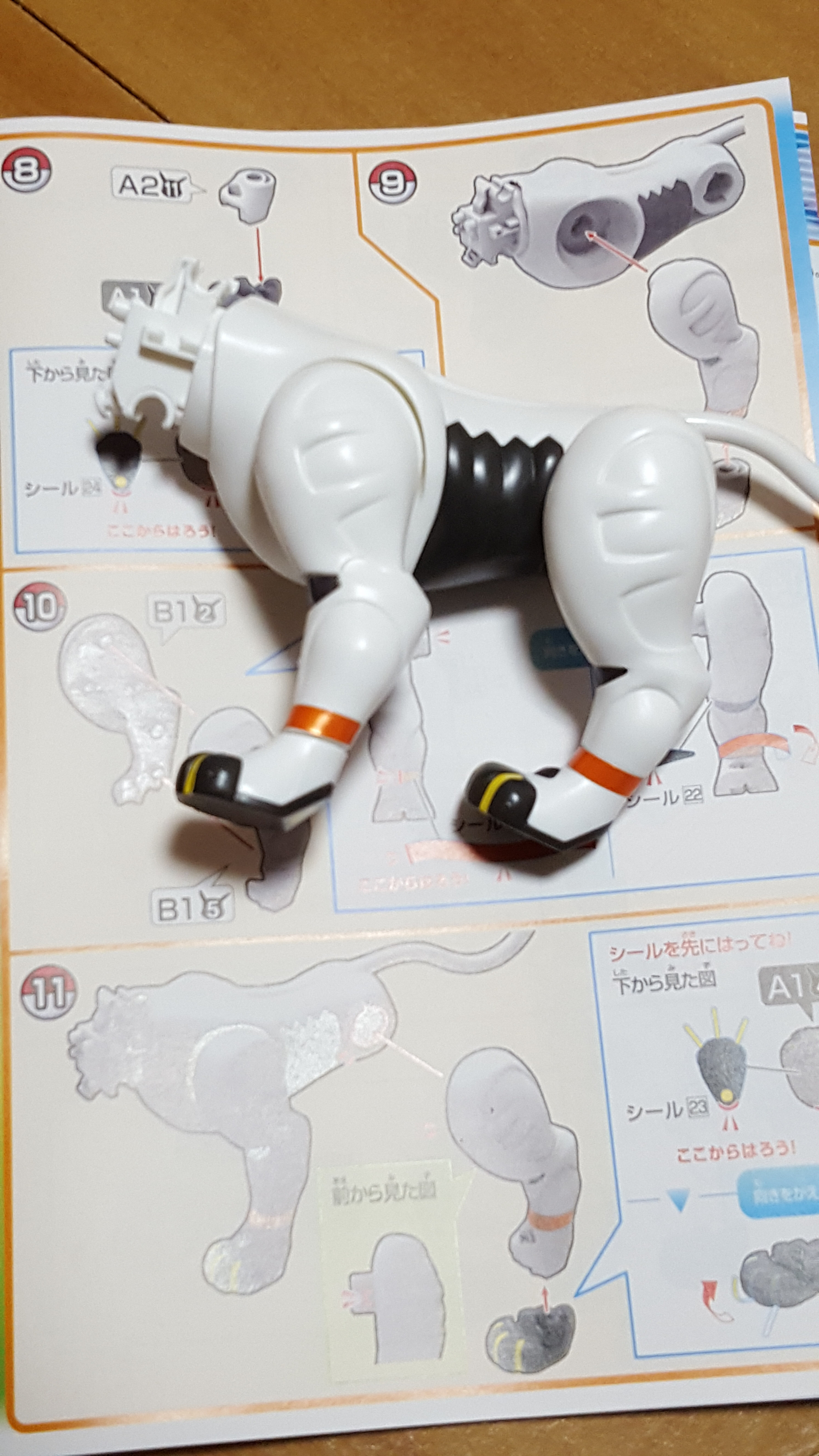 And here’s what it looks like with two legs. There are a couple things to point out: 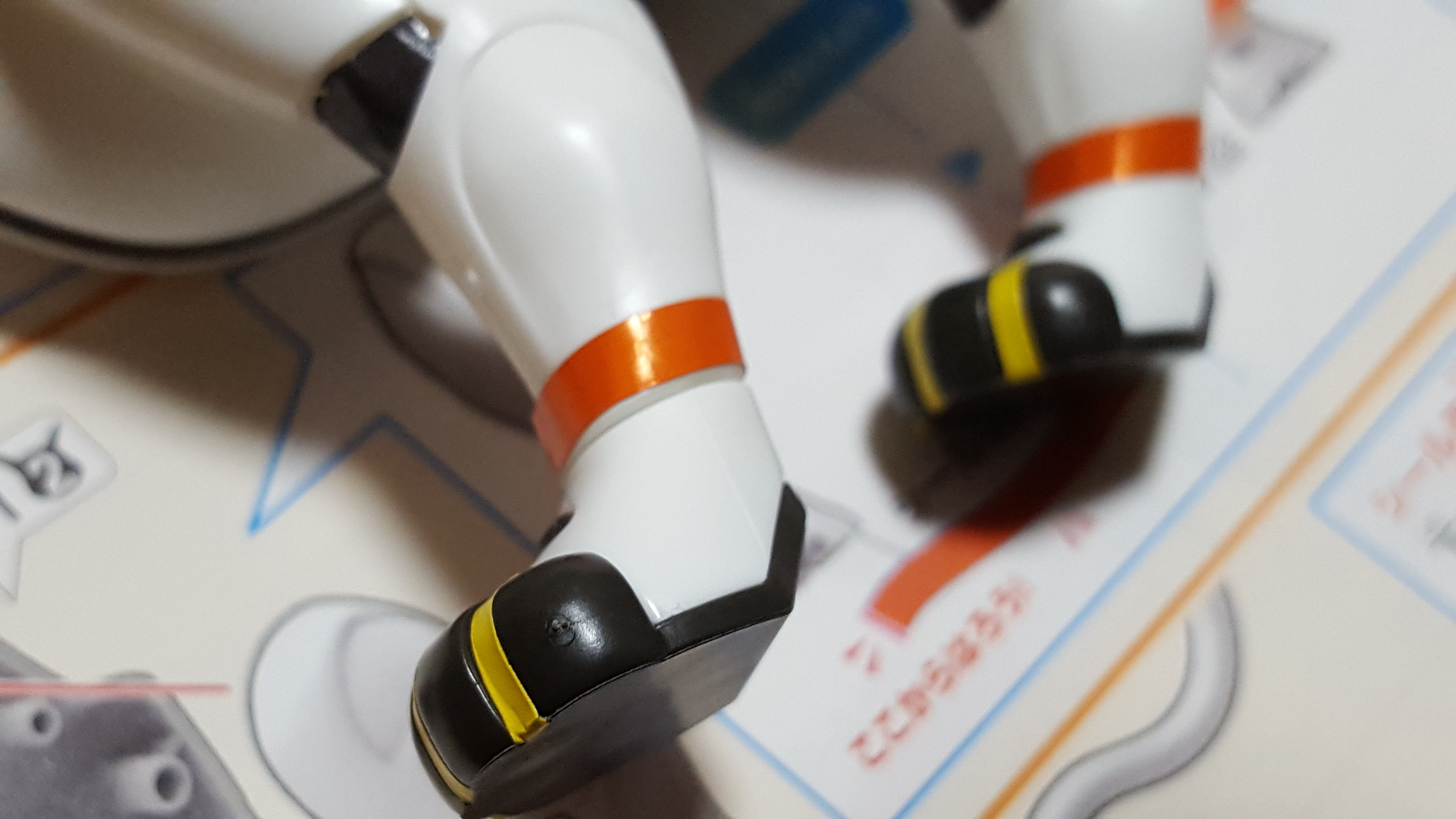 Here’s a closer shot of the feet. Not bad, eh? 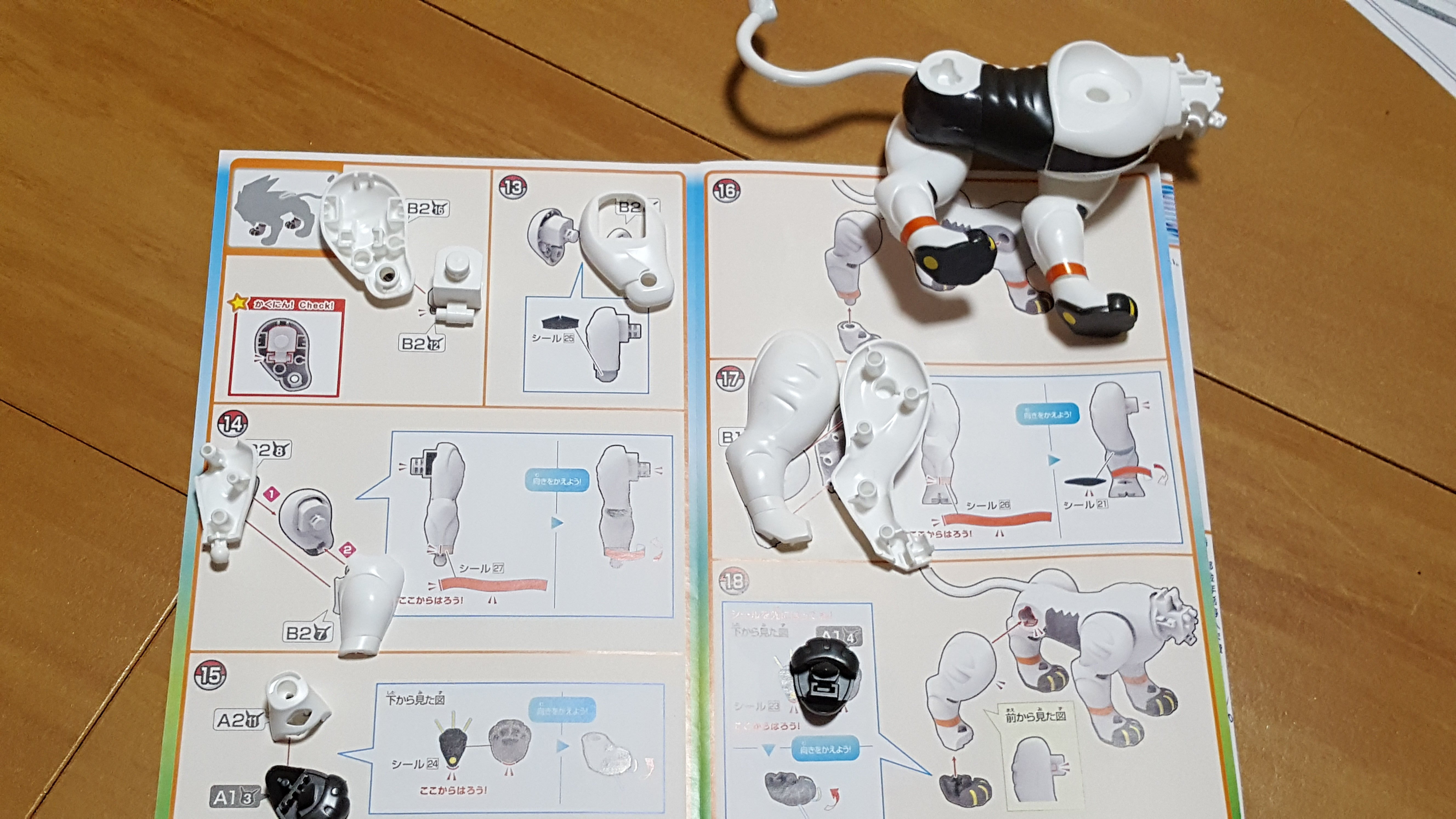 On to the next pages! We’re building the other two legs here in the same fashion as the first.

After the legs are done, you’ve got this lovely headless torso. There’s a lot of articulation for a Pokemon kit; it’s all good so far! 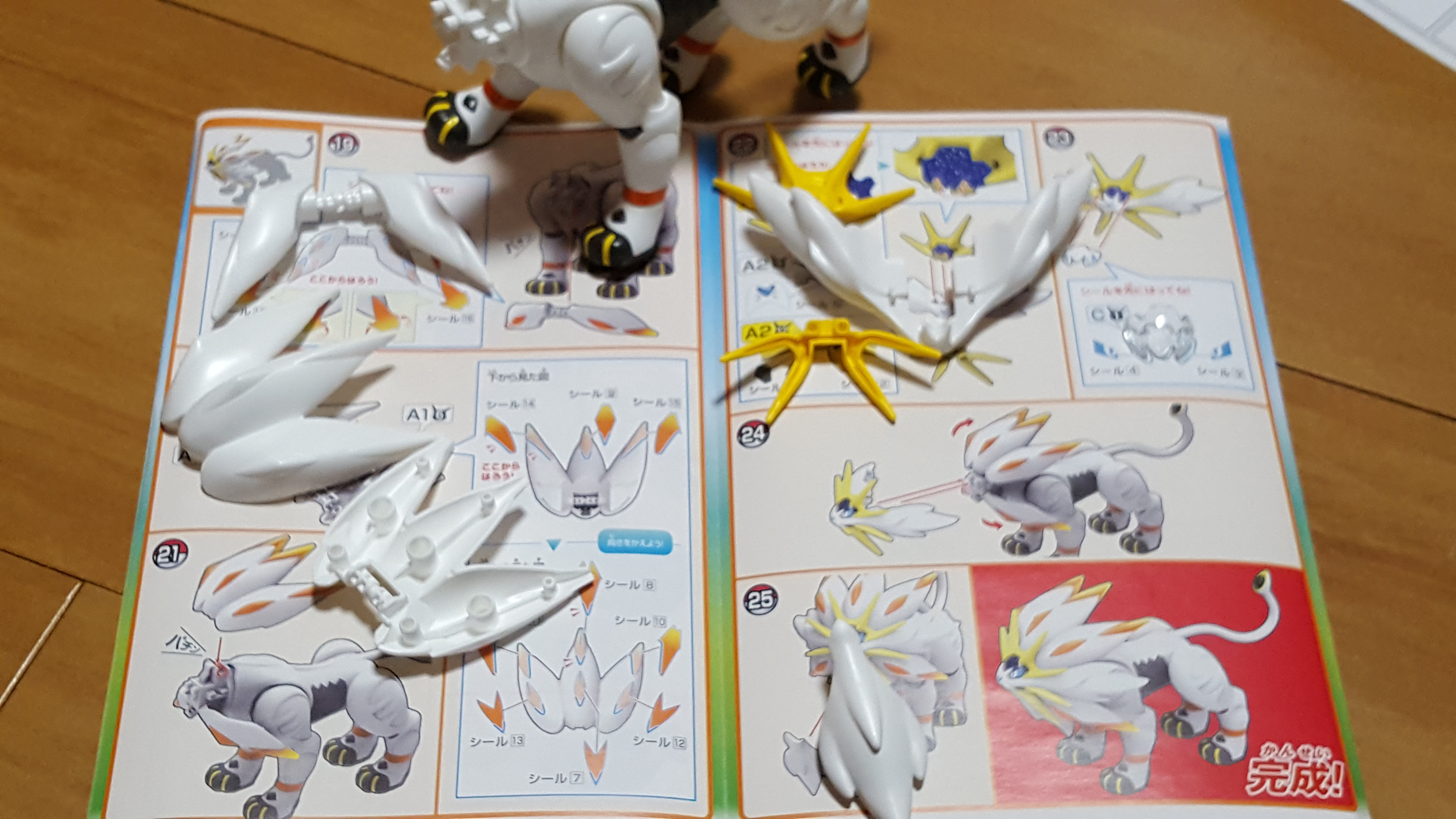 Here are the final steps; we’ll be building the head and mane here. Sections of the mane are actually articulated, as is the neck, so you can pose this kit in quite a few ways when you’re done!

The orange stickers on the mane are so tedious, but with about 10 minutes of careful application, I got them on clean and they don’t look too bad. 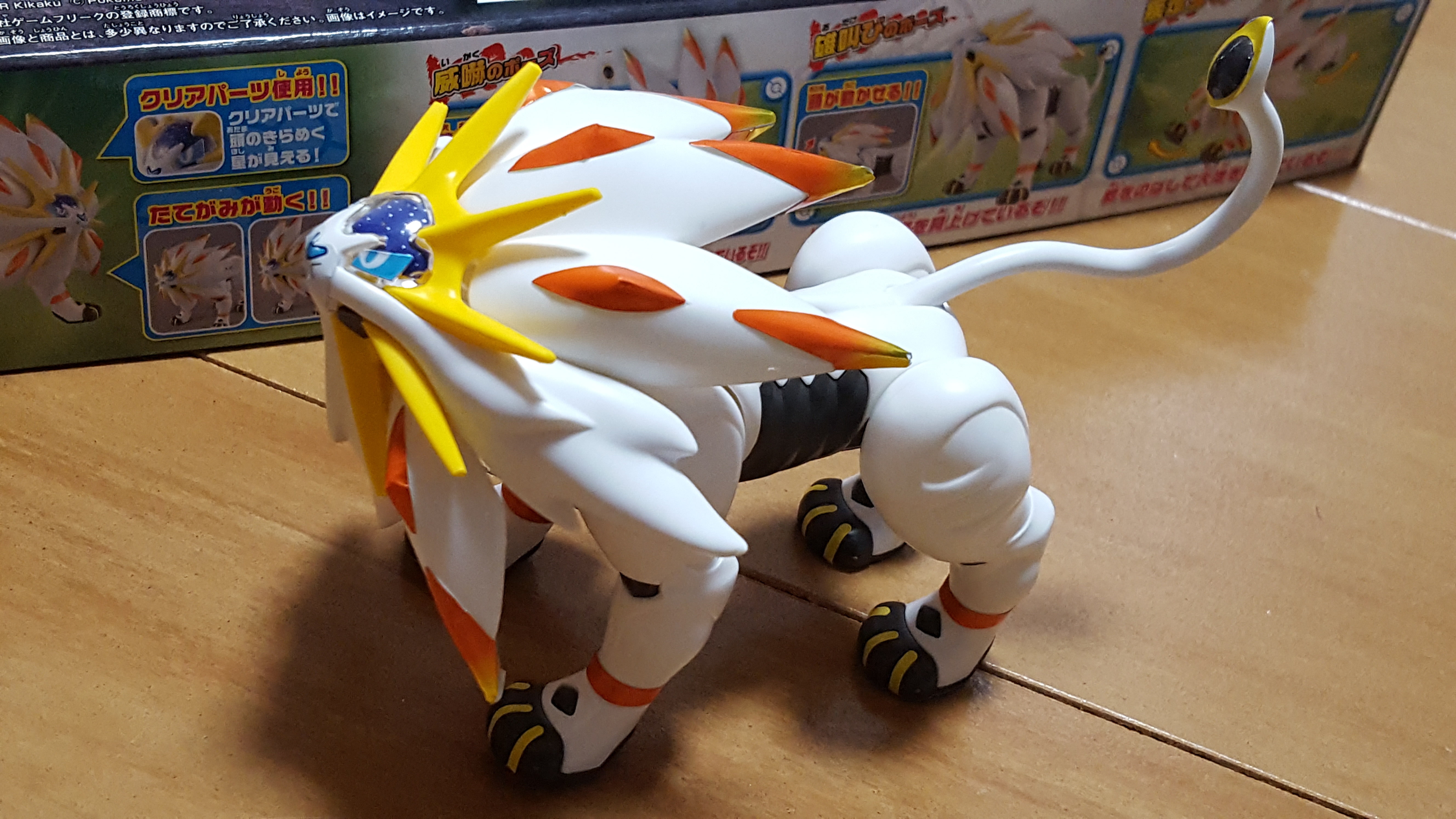 The completed kit! The detail stickers are actually pretty nice on this one — but the face is a bit of a letdown. The eye stickers really look like stickers against the clear part; they don’t blend in neatly in my opinion. That’s the only real sticker beef I have, though!

As I’ve mentioned a few times, this is a really articulated beast, too, so you can get quite a few poses out of him! 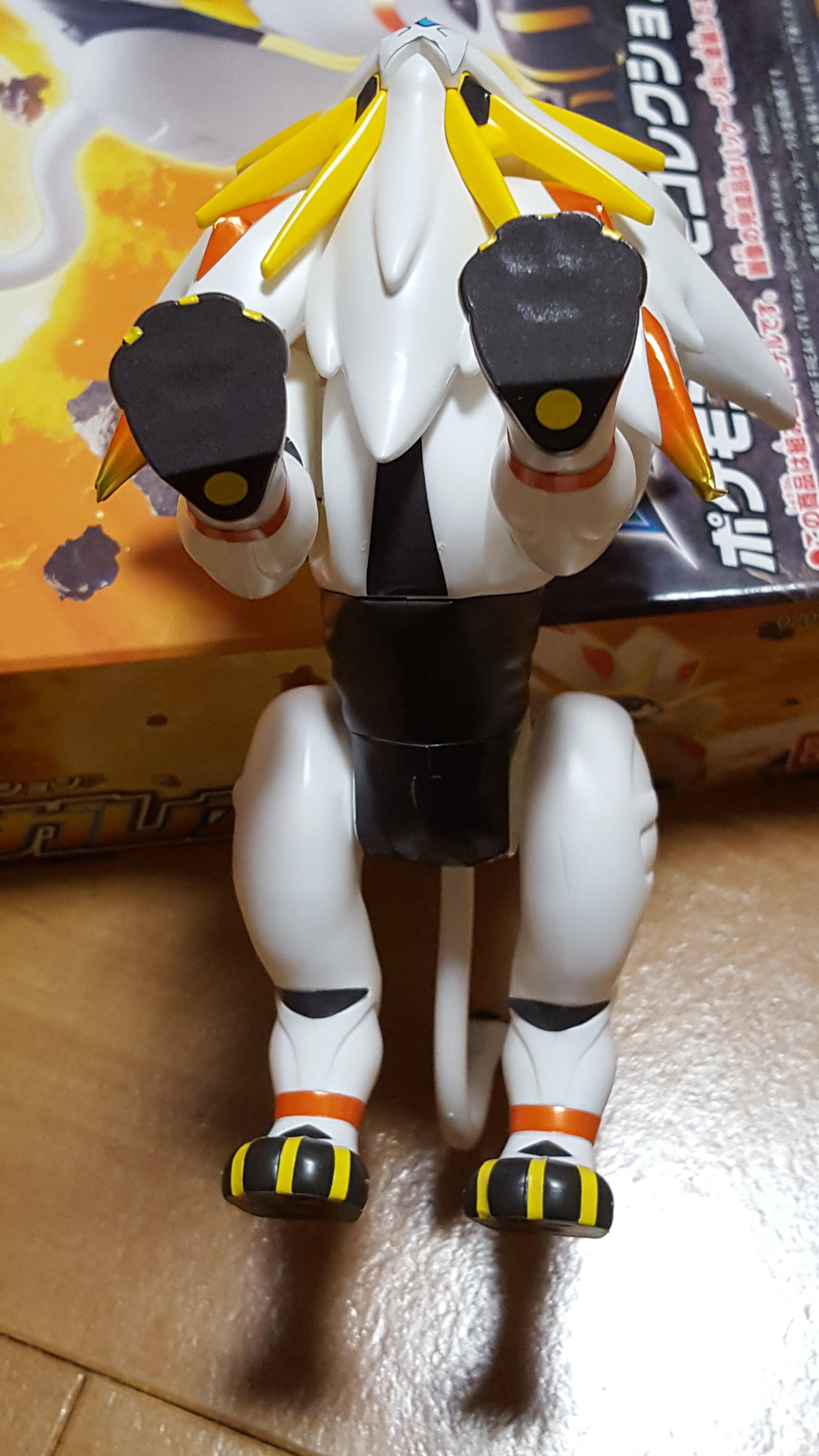 Here’s what the model looks like from the bottom. Bandai took care to make even this angle look pretty good.

And finally, I tried out some other poses! You can easily get him standing on his back legs, raise and lower his head, and bend or straighten the front knees.

What do you think? Will you add this lion-y pocket monster to your shelf?
– Pokemon Pokepura #39 Select Series Solgaleo