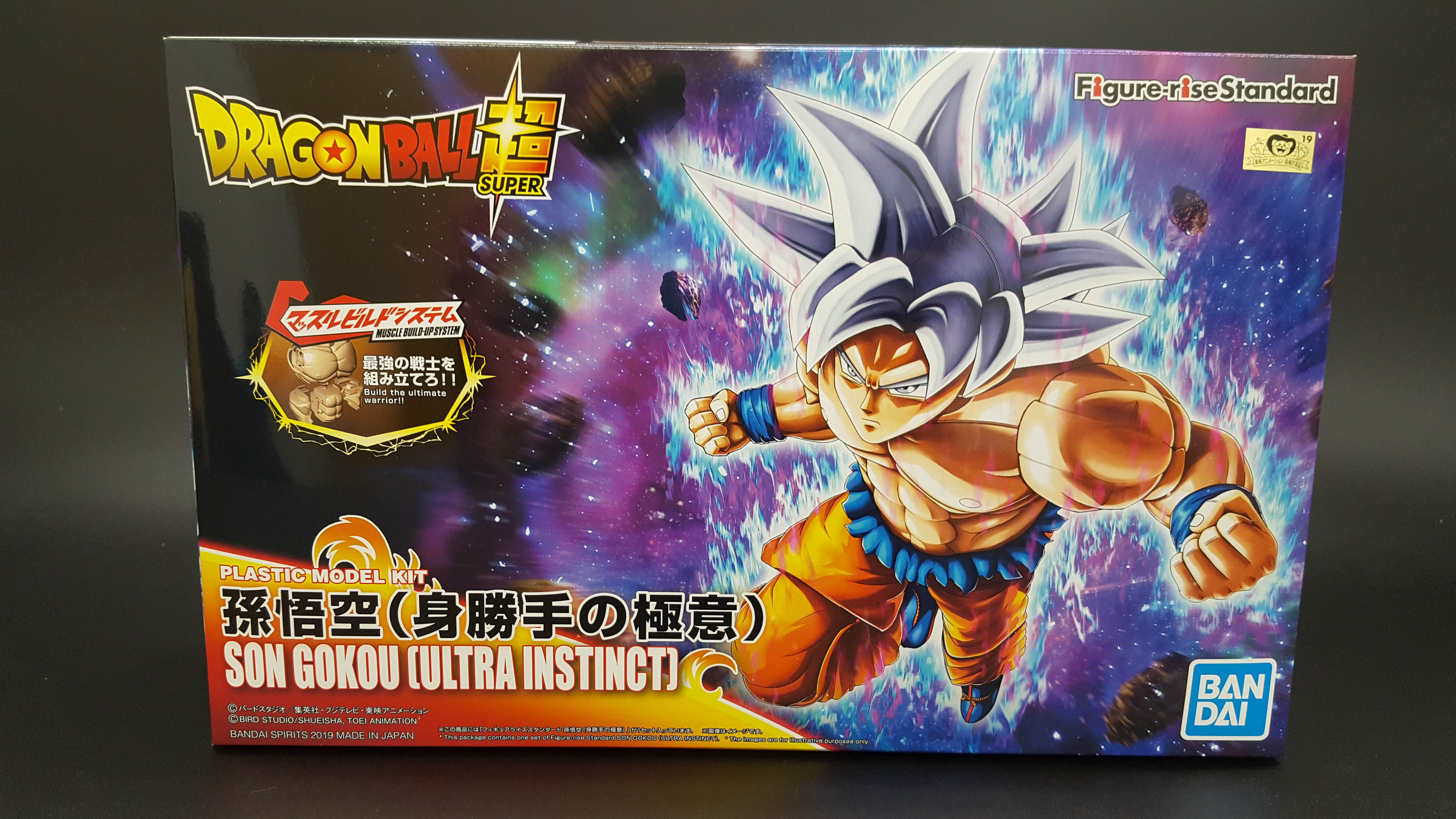 The other day we took a look at the new Figure-rise Broly from the Broly movie, but he wasn’t the only Dragon Ball Figure-rise release this week! Ultra Instinct Goku from Dragon Ball Super has also joined the lineup of Bandai’s “action figure alternative” model kits!

As you’d expect, this guy is molded in a bunch of colors so you really don’t need paint unless you want to add a little more detail.

Goku doesn’t have the same number of parts as the Broly kit we took a look at, but he arguably has some even cooler pieces. Let’s dive in! 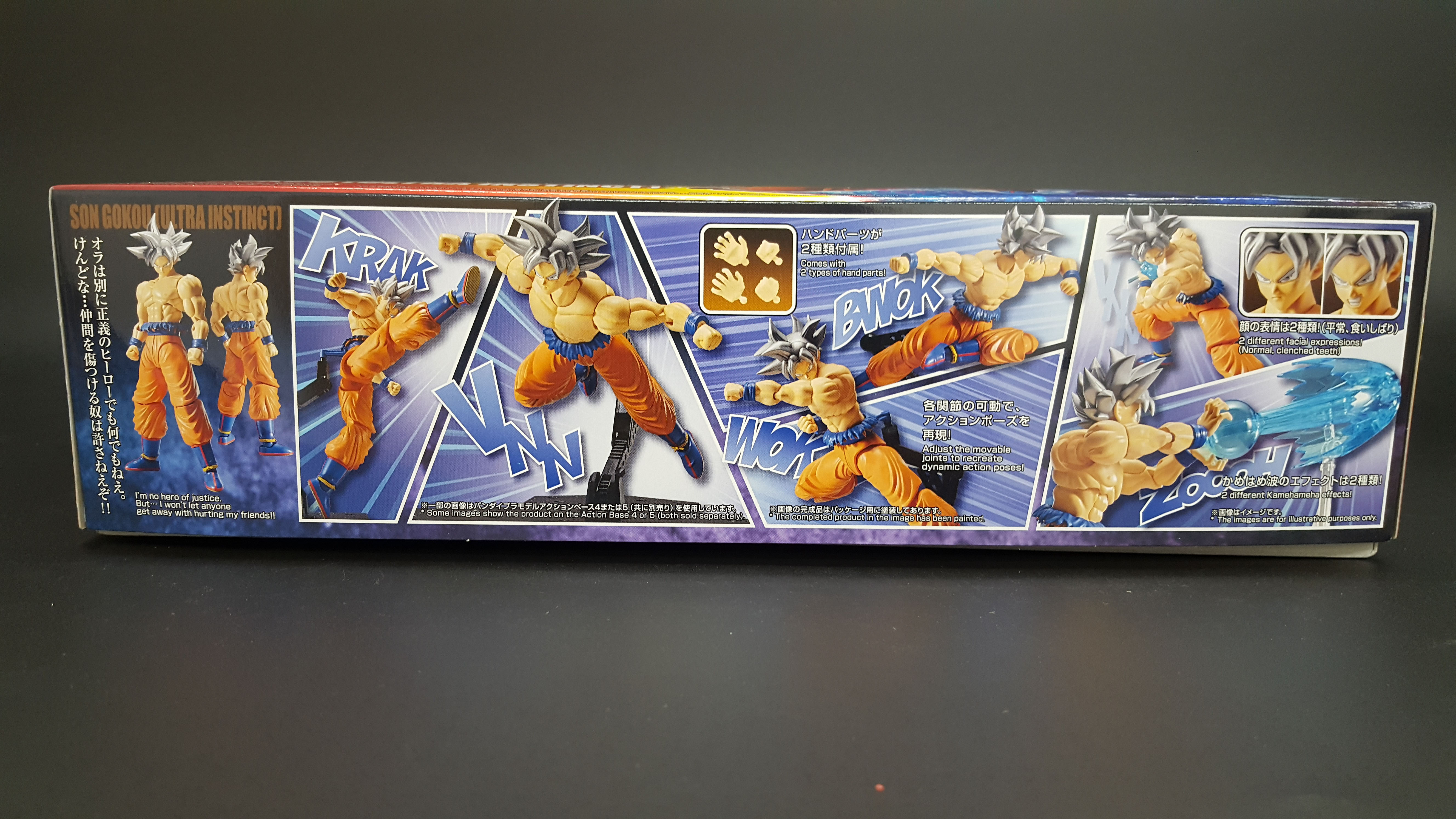 As always, we first get a look at what could be when the build is finished. Goku has a whole lot of articulation so you can get a bunch of fighting poses out of this guy. He includes two hand options similar to Broly: a pair of fists, and a pair of open hands with clenched fingers.

You’re also getting two expression options: serious-face and angry-face. But my personal favorite part is the effects parts! Pictured here, you can see this cool, translucent blue with Goku in the Kamehameha pose. The box also promises two different Kamehameha parts, so I’m eager to see what the other looks like!

It’s worth noting that this kit doesn’t come with a stand, so to get the really dynamic poses or flight poses to stay, you’ll want to pick up an Action Base 4 or Action Base 5. 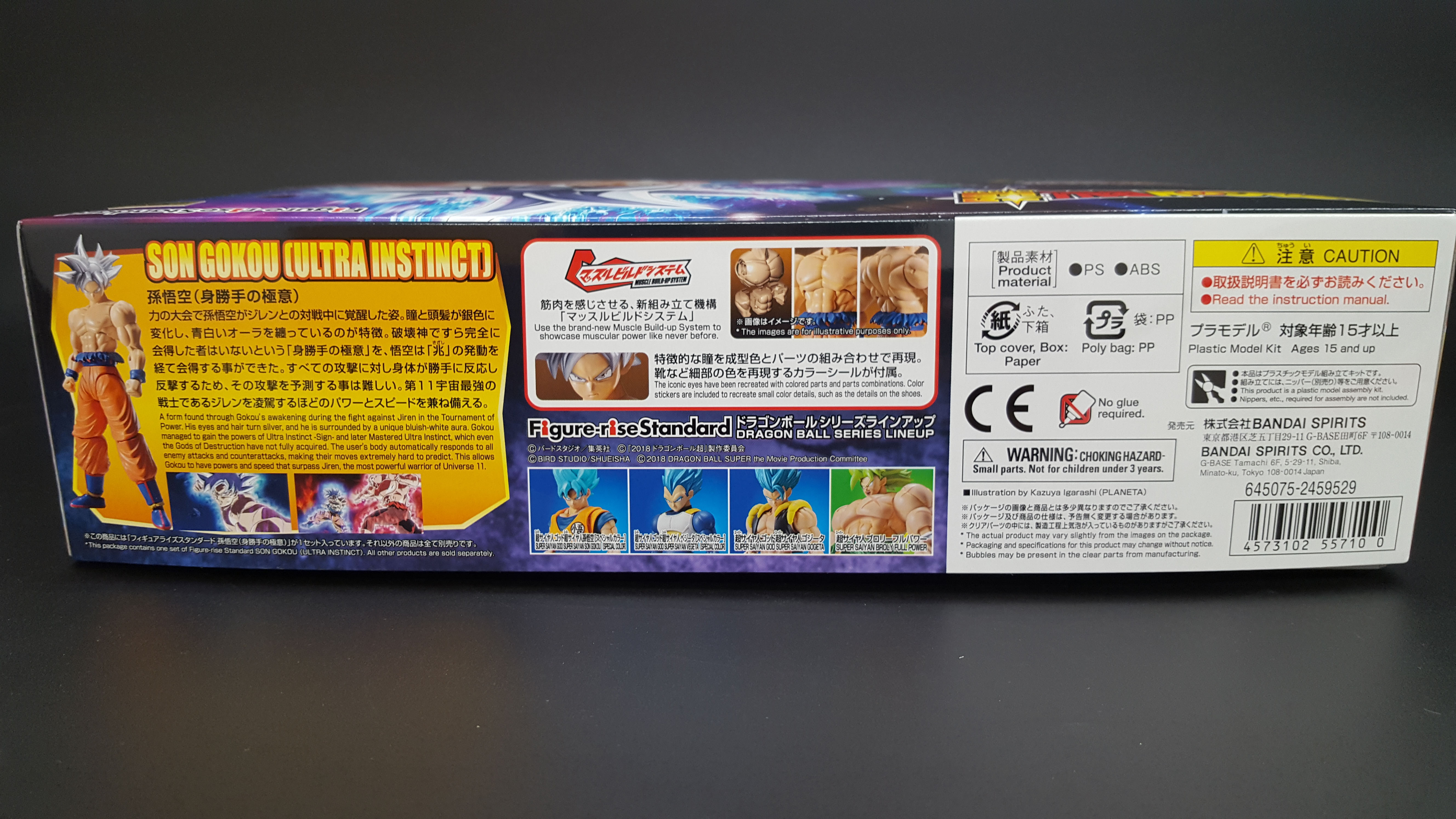 Here, we’re treated to a blurb about this version of Goku:

A form found through Gokou’s awakening during the first fight against Jiren in the Tournament of Power. His eyes and hair turn silver, and he is surrounded by a unique bluish-white aura. Gokou managed to gain the powers of Ultra Instinct -Sign- and later mastered Ultra Instinct, which even the Gods of Destruction have not fully acquired. The user’s body automatically responds to all enemy attacks and counterattacks, making their moves extremely hard to predict. This allows Gokou to have powers and speed that surpass Jiren, the most powerful warrior of Universe 11.

…Can I have one of those?

Anyway, here we also see that Goku’s eyes are pretty much perfect thanks to included detail parts, and we get a good look at the crazy buildable muscles that capture the bulky body style of the fighters in Dragon Ball perfectly!

There’s also a brief look at the bottom of other characters in the line. 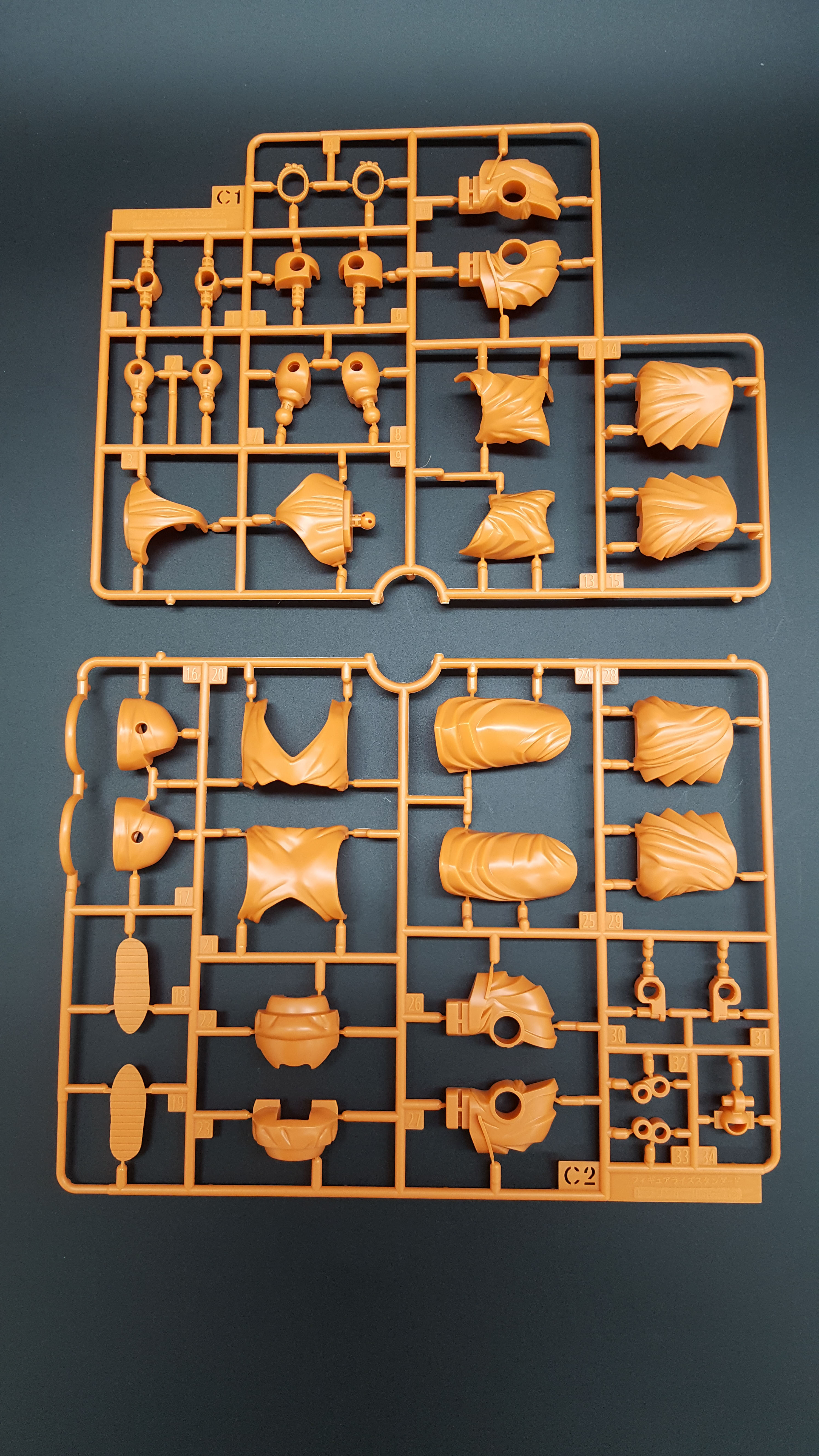 The C runners features all the orange gi parts you can shake a stick at — even the soles of the shoes are molded in orange here (is that accurate?). The next runners, D and Q, are both much smaller. Here we get Goku’s gi details like his wristbands and ankle bands, belt, and shoes. The Q runner has his lovely glossy silver hair parts and flesh parts, including his face plates.

I think I spot his silver eyes in there, too! 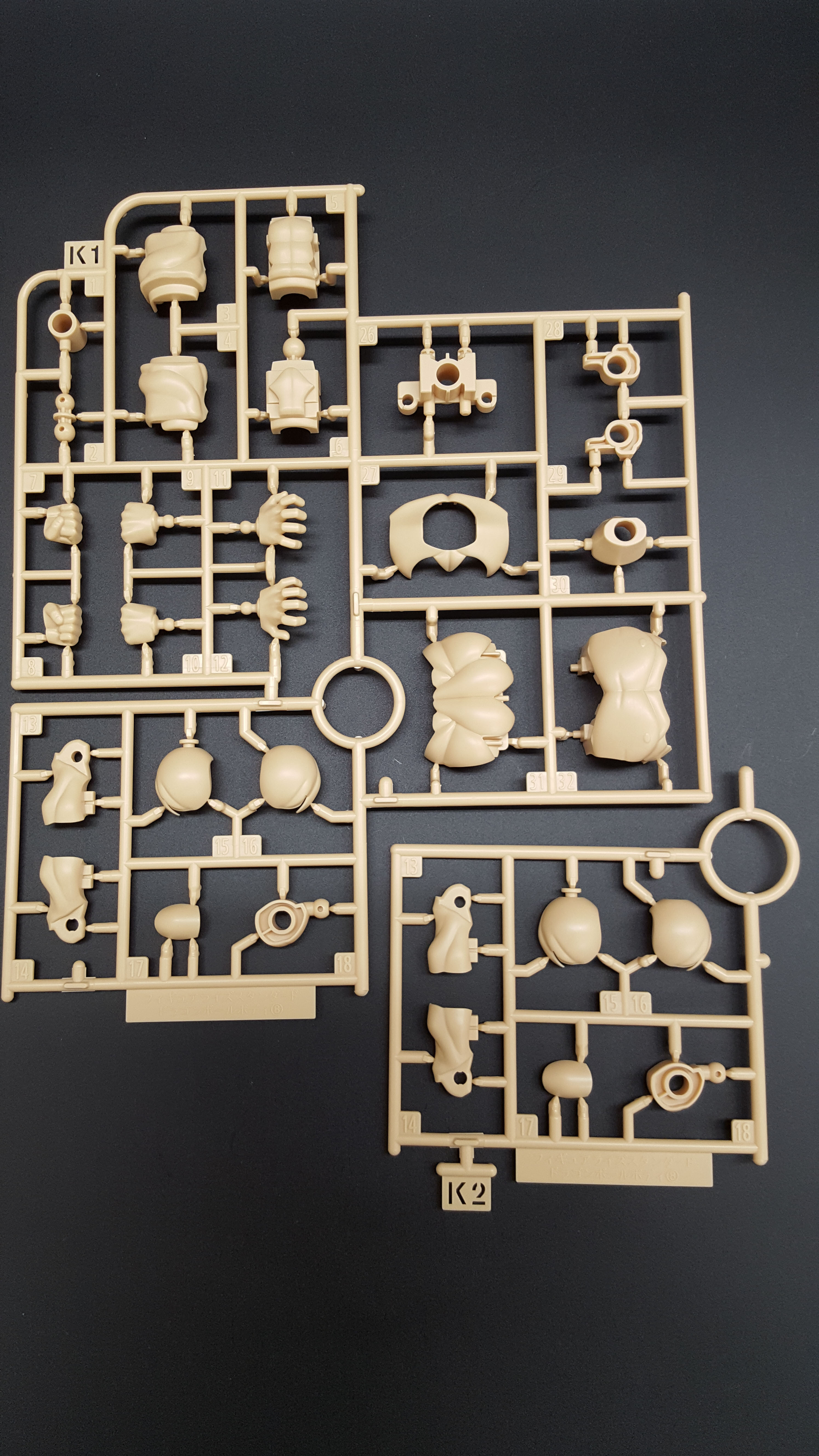 On to more flesh parts with the K runners! We’ve got bulging muscles galore and hand parts here. It looks like he actually comes with two pairs of fists, so you don’t have to worry if you drop one or if your dog eats it, or the many other mishaps that can occur when model building. 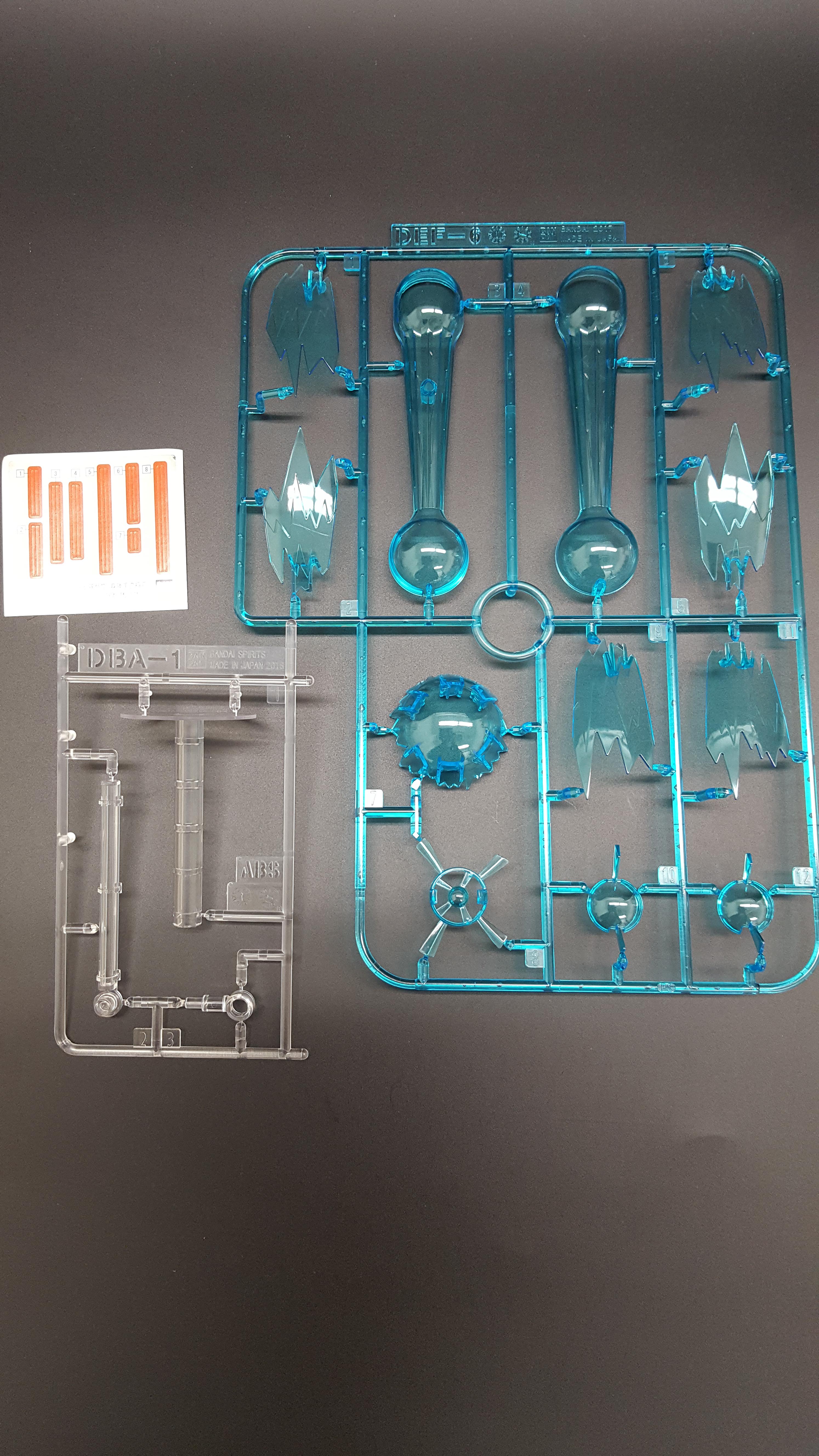 Here are those lovely clear parts. The Kamehameha parts appear to offer a short blast or long blast form, so you can build what works best for the pose you want to set up for display. The clear parts go with the blue effect parts to act as a stand, and the stickers are for small gi details like the stripes on Goku’s shoes.

I think it’s safe to say that Figure-rise Standard Son Goku (Ultra Instinct) is a reasonably simple kit, and the price point speaks to that. The exclusion of a stand certainly brings the price down, so you’ll want to take into consideration the cost of adding a stand if you want to get some of the cooler poses out of this kit. That said, I think this kit still has pretty great value for what you get, especially the effects parts!

I’d love to see your builds & poses if you’ve bought this kit — please share them with me in the comments, or in the .tv communities!