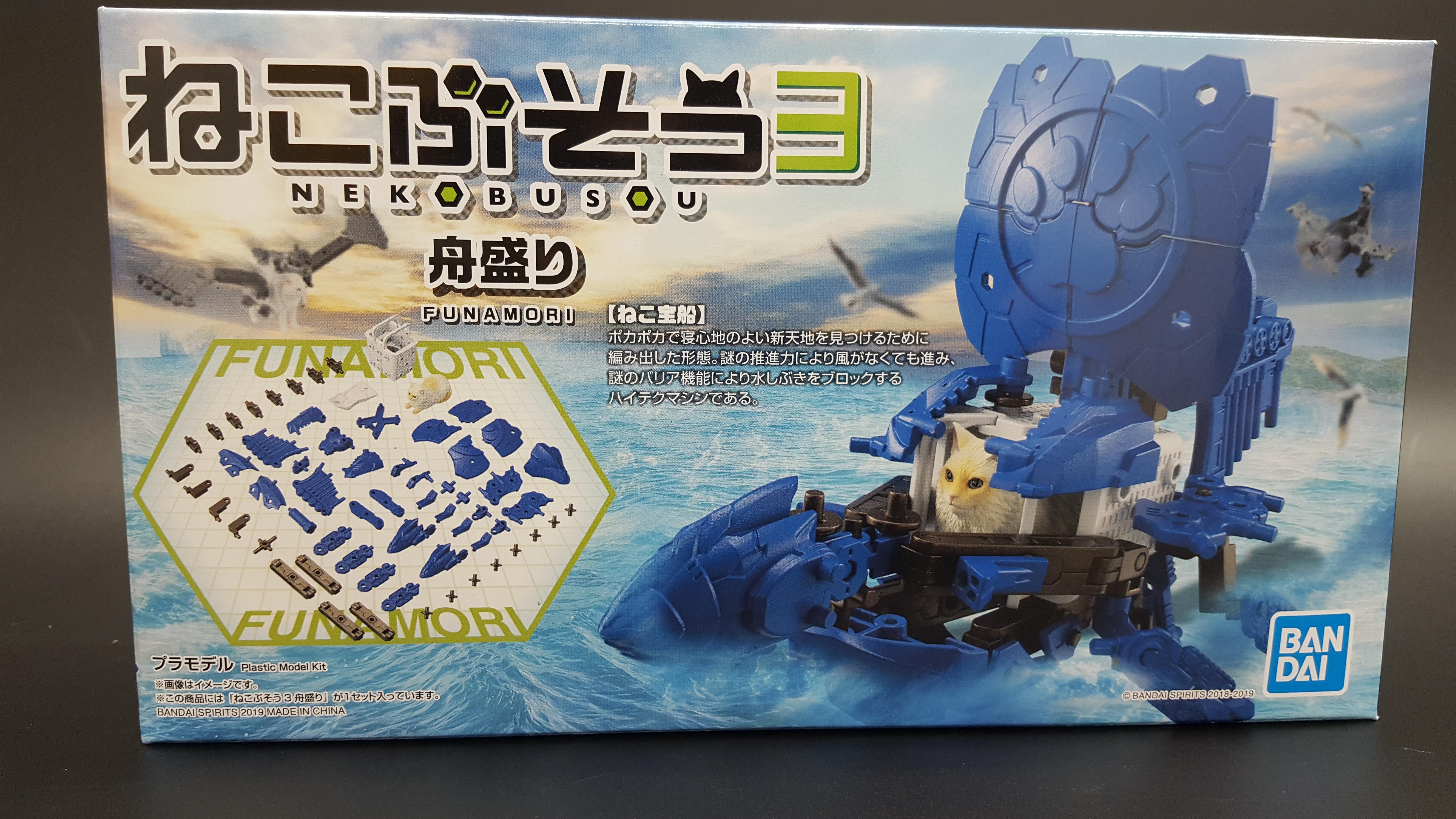 The third wave of our favorite feline overlords has arrived! If you haven’t been paying attention, Neko Busou is a model kit series from Bandai that started as an April Fool’s joke, and became reality thanks to enough fans expressing interest in the items as real kits. There have been three series so far, each with 4 small kits and 1 big kit, all of which have their own unique kitty figure. The best part is that these kits’ pegs are all compatible with Gundam, so you can customize to your heart’s content!

Neko Busou 3 Funamori is the “big” kit of the third series, and features a long-haired cat for the first time, who pilots a water-based vehicle in search of warm, sunny beaches for napping. 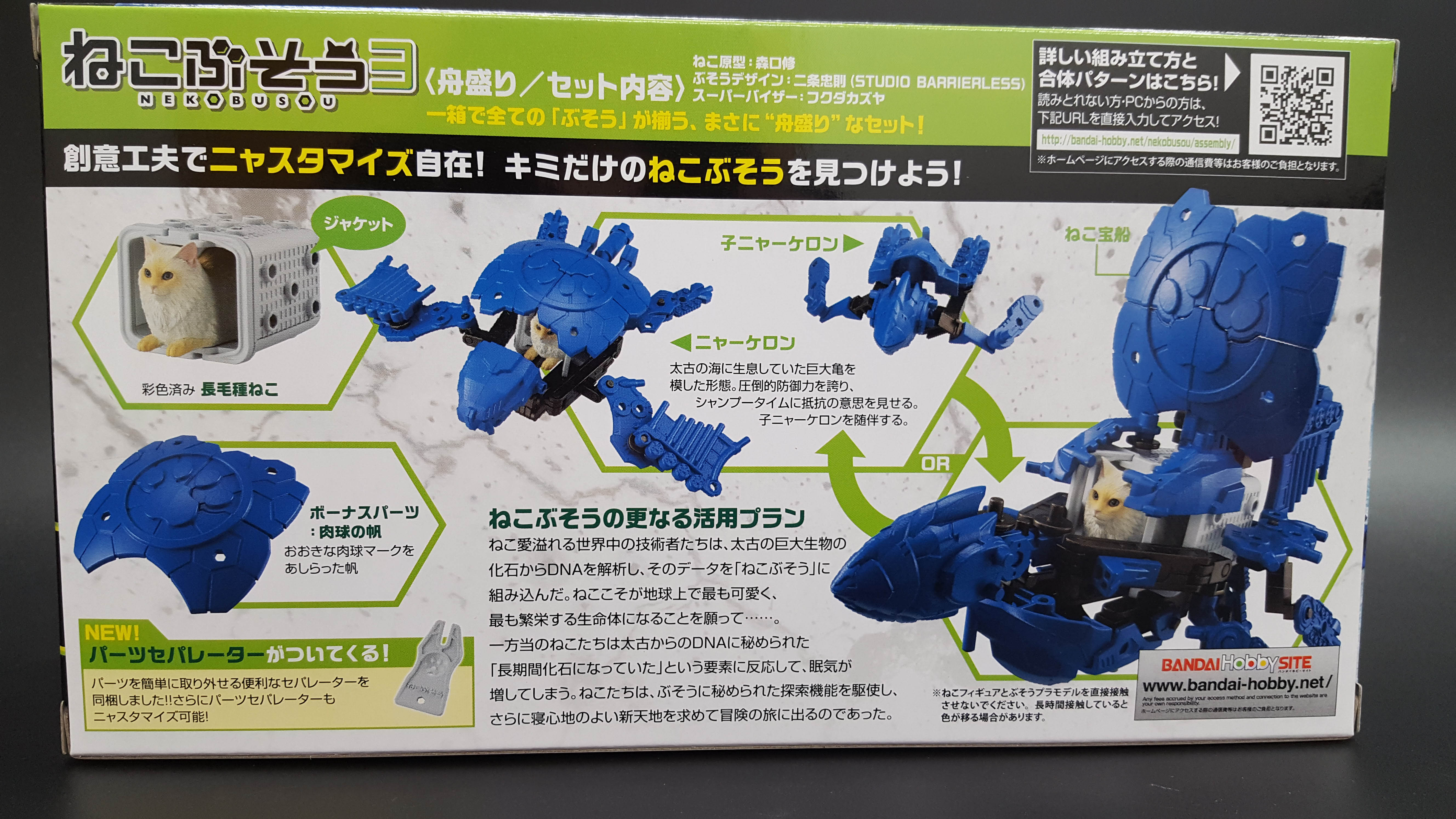 Every Neko Busou cat comes with a cockpit-like “jacket” — previous kits featured jackets made to look like cardboard boxes. This time, we’ve got a basket-shaped jacket with handles. The holes on the jacket are what allow you to equip the cat with the parts provided, or any other Gunpla parts you’d like to try.

Bandai points out the special paw print emblem part, as well as a parts separator. This makes it much easier to build and rebuild the kit as you like!

You can build Funamori in the likeness of a sea turtle and baby sea turtle, or the “treasure ship” form seen on the right.

Neko Busou kits consist of few runners, all of which are relatively small and molded in only a couple of colors. Funamori is no exception. 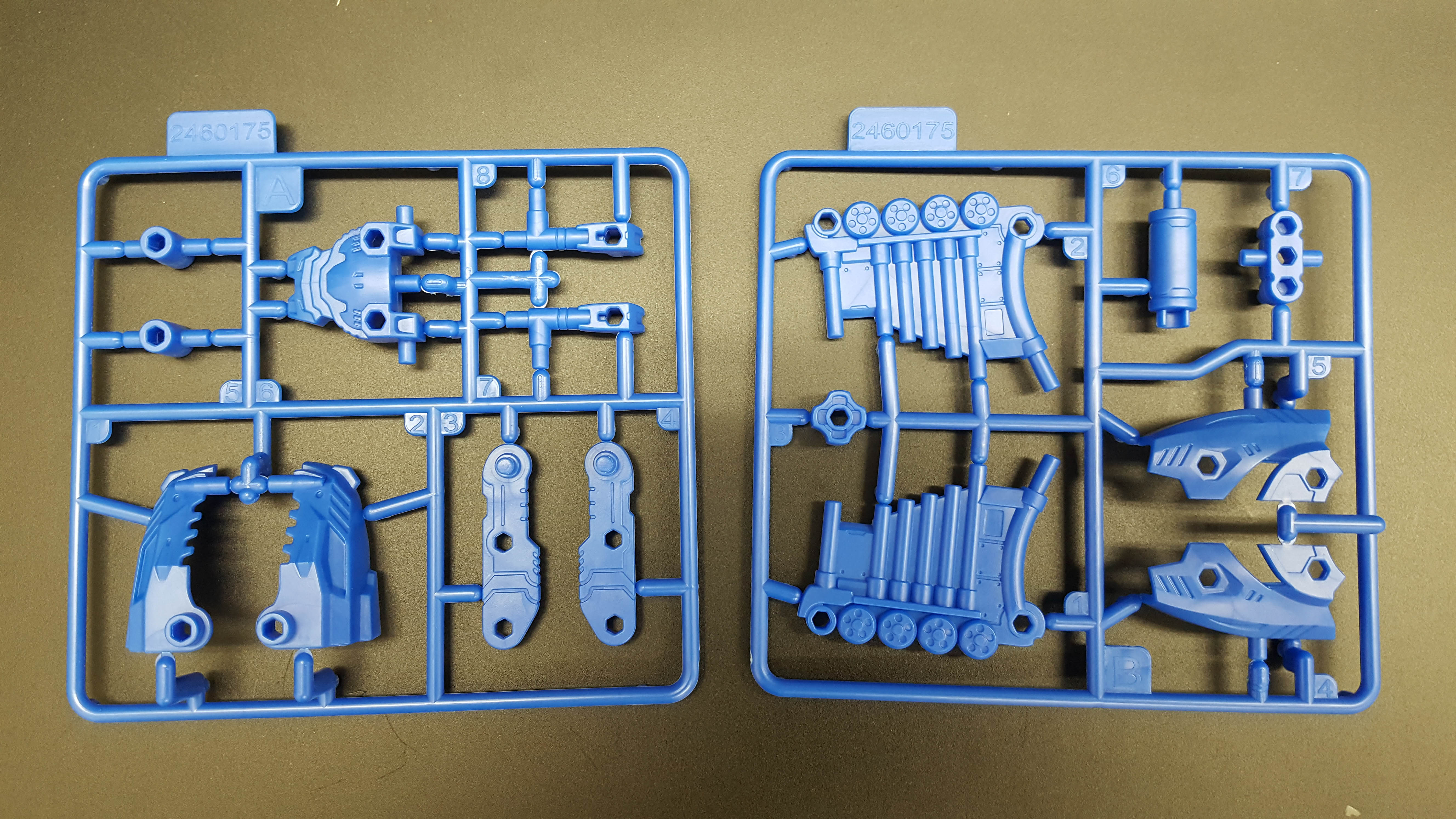 A and B are about the same size, with blue parts. 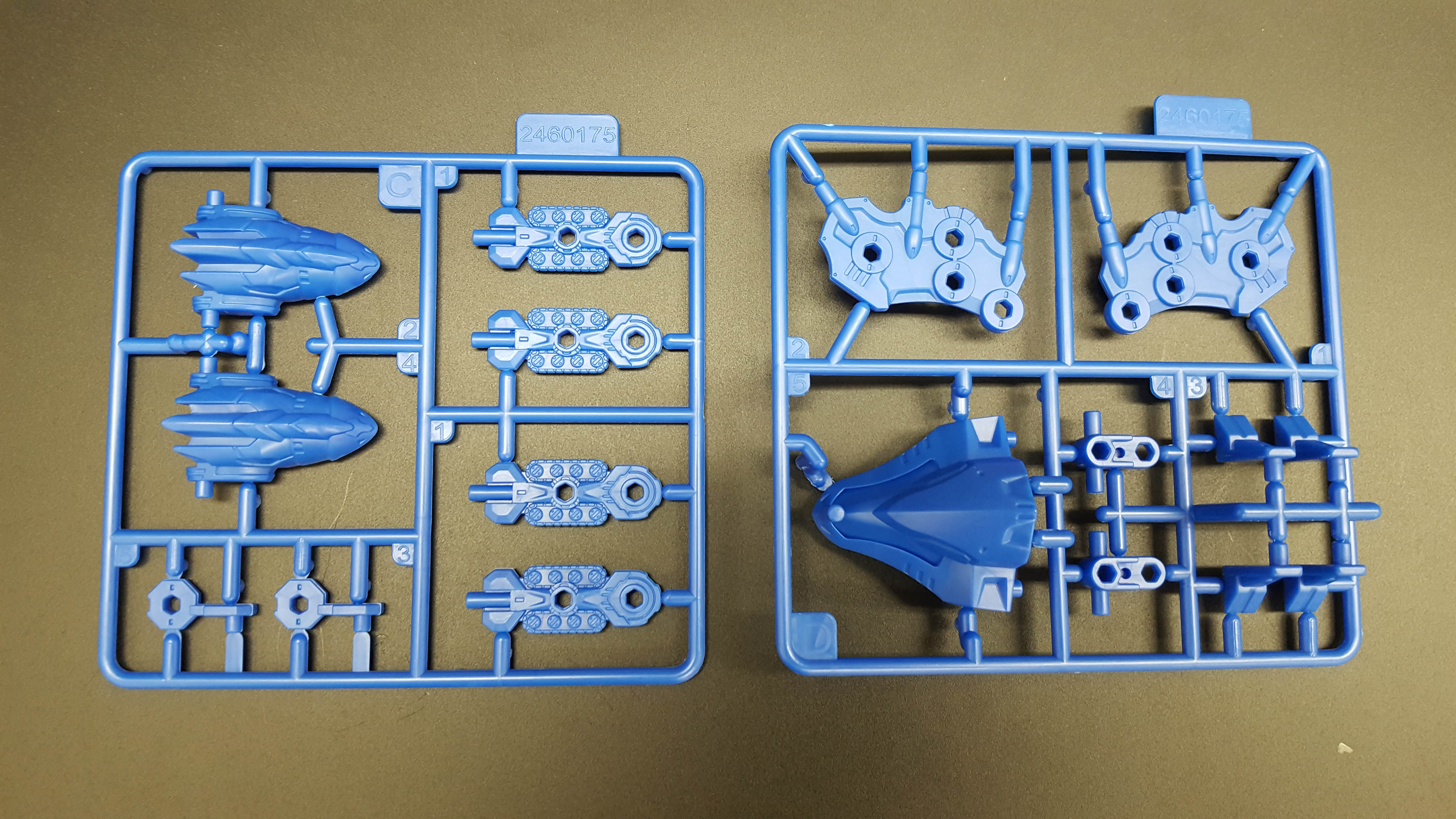 C and D aren’t much different. 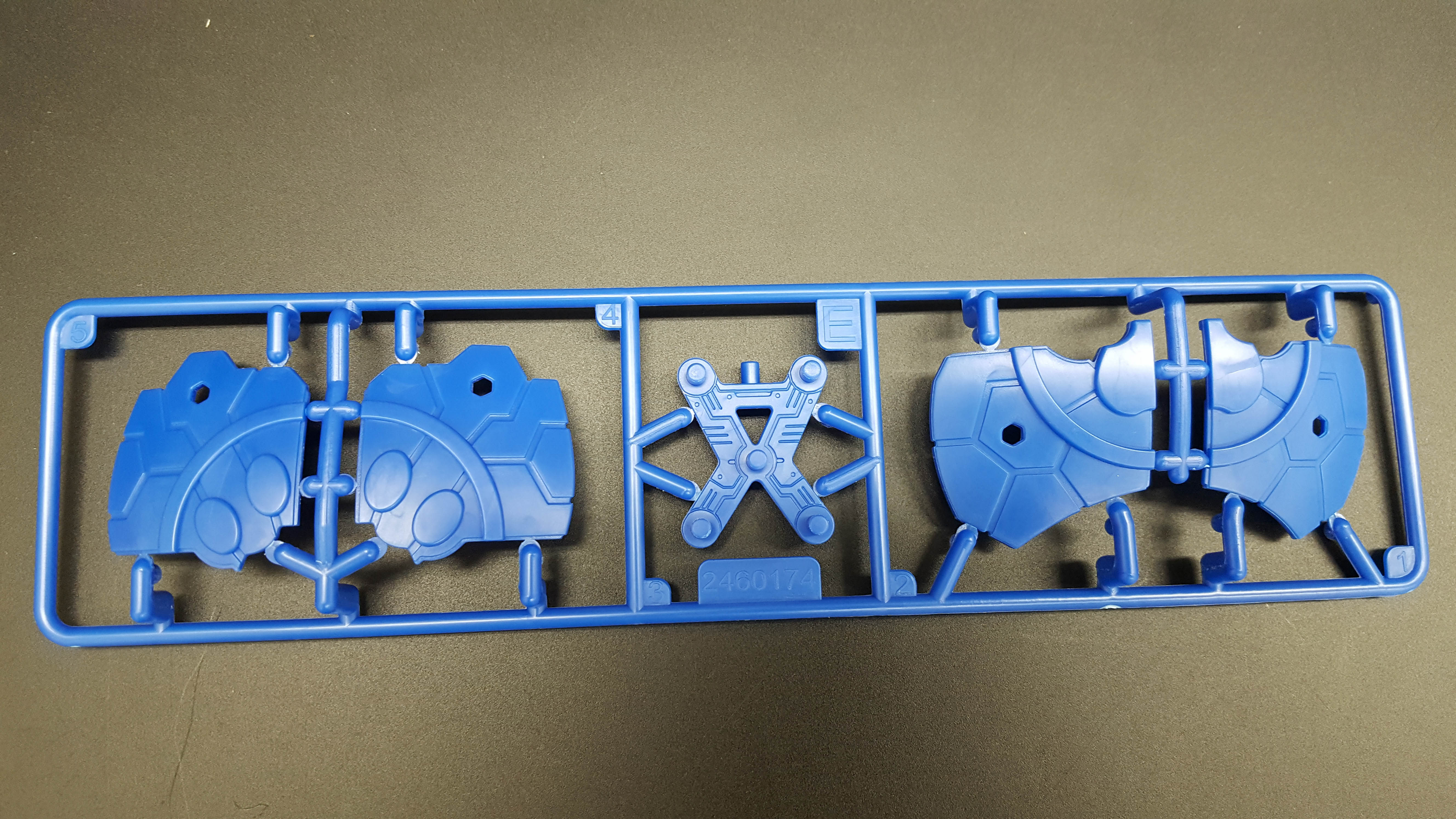 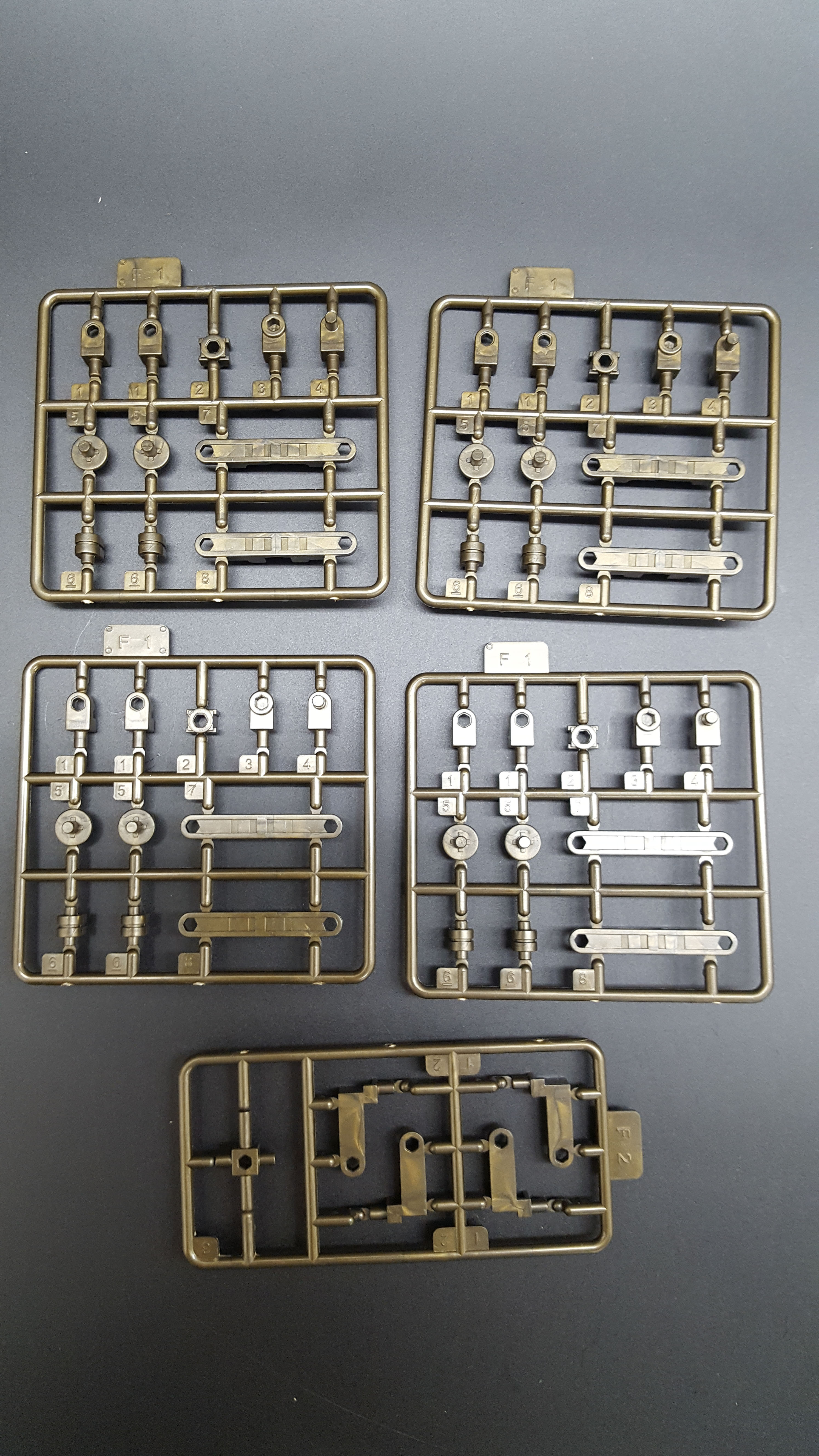 There are several small F runners in a bronze color; these are all mechanical parts that will mostly be hidden beneath the blue parts. 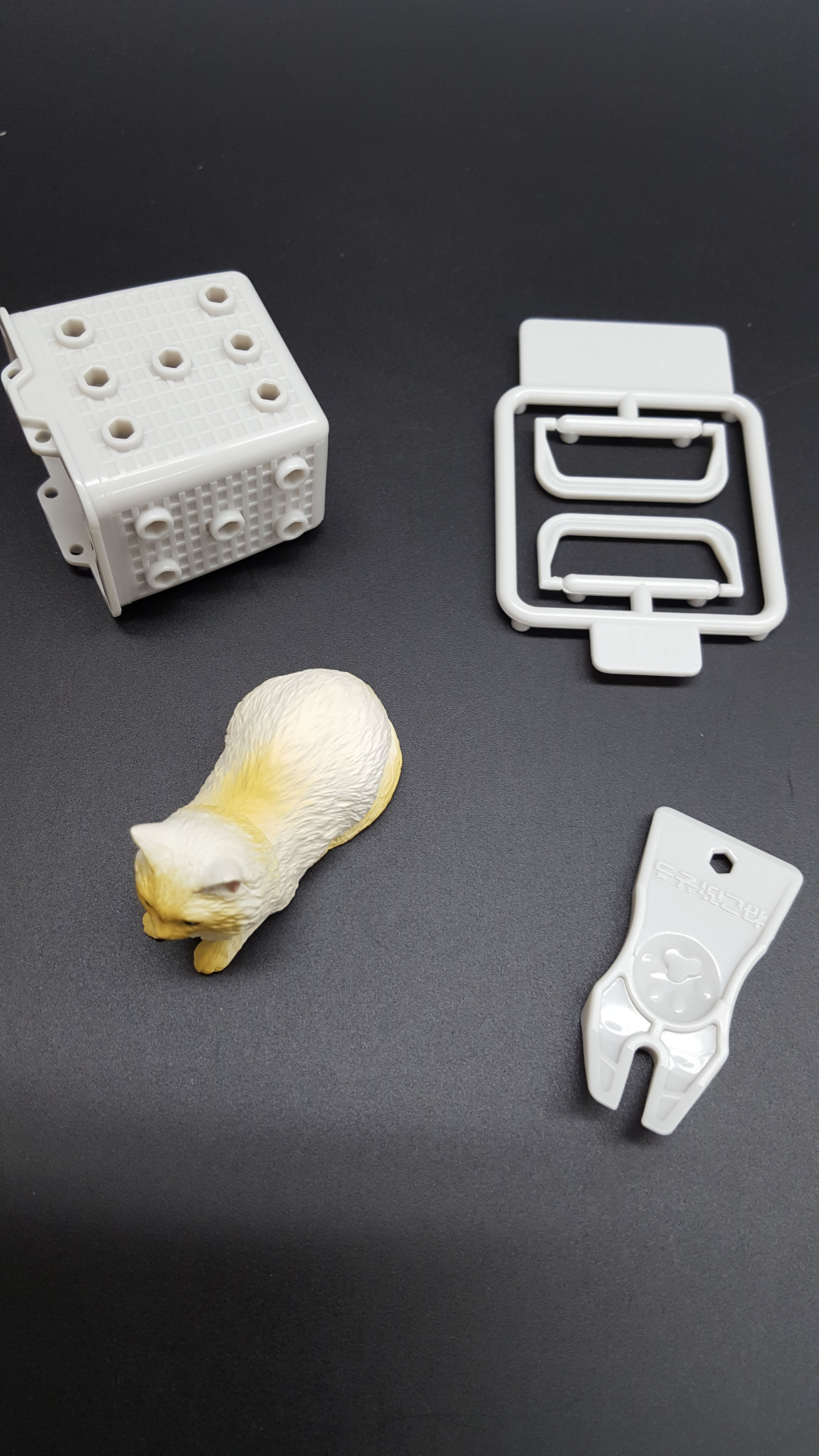 And here’s the miscellany! The basket-like jacket comes with its handles on a small runner. Here is the cat figure and parts separator, too. 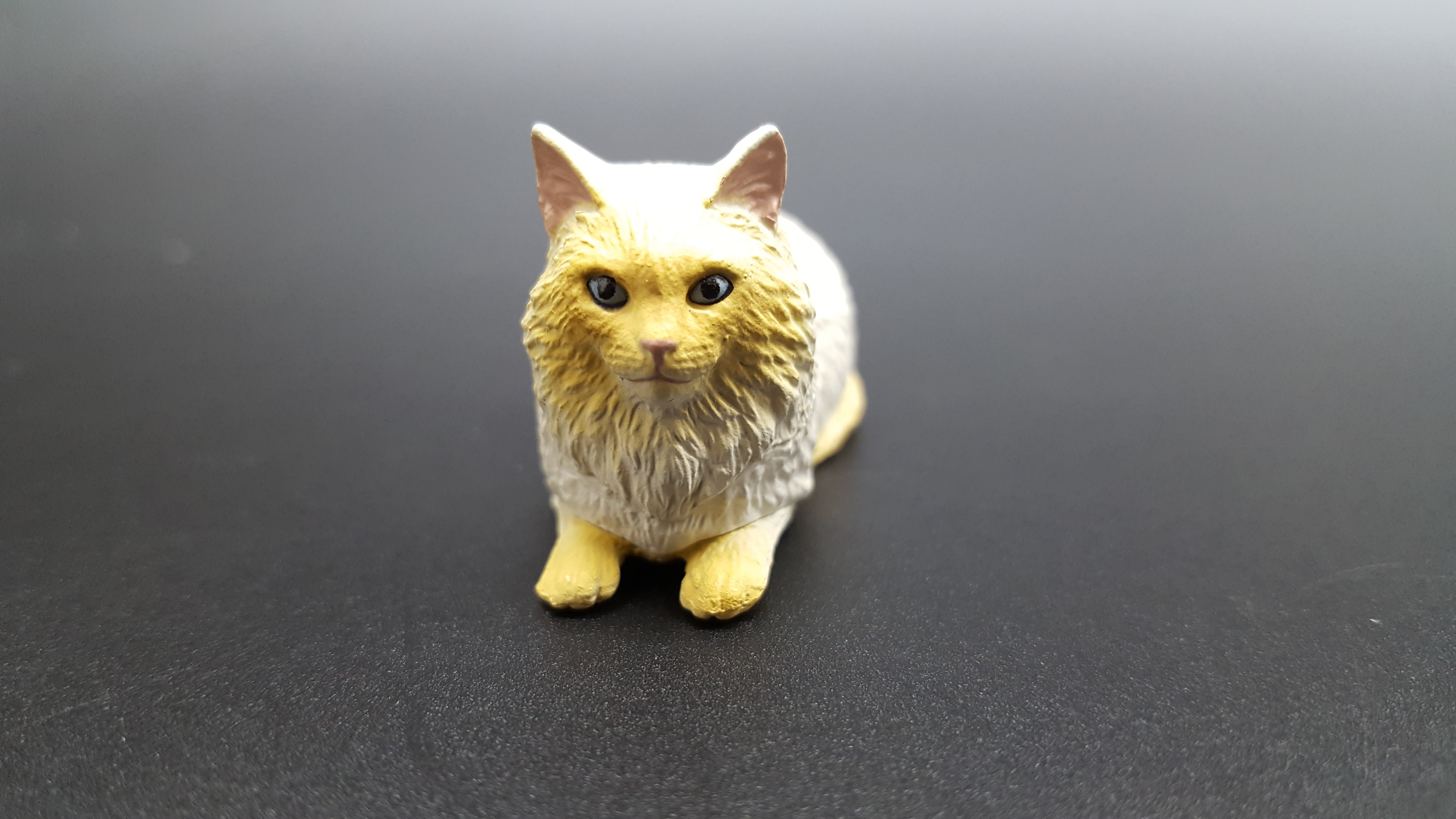 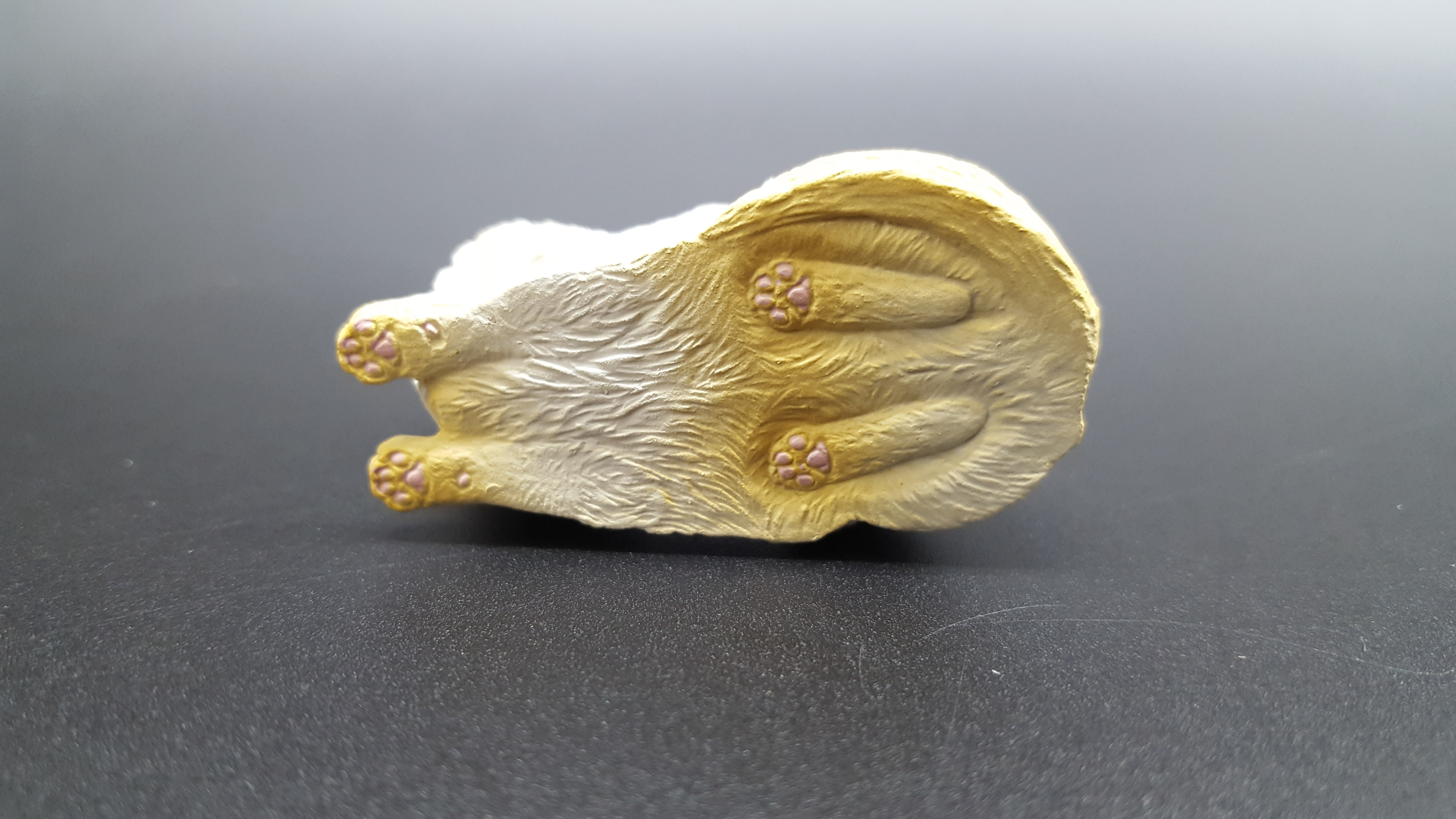 The toe beans are fantastic! Something I love about the Neko Busou line is that Bandai doesn’t skimp on the detail of the cats, going as far as to fully detail the bottom of the figures, even though you won’t see that part very often. 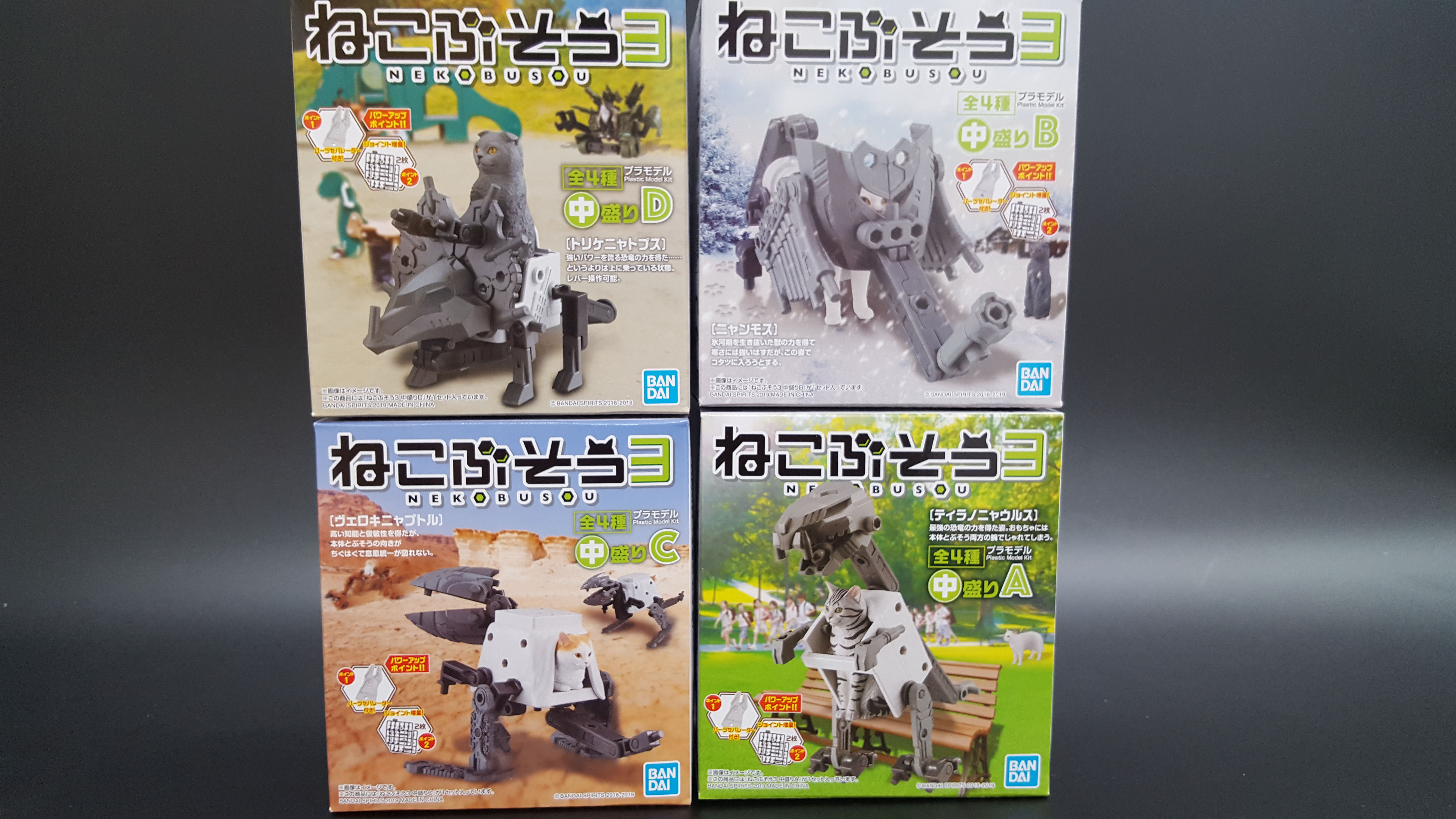 The assorted 4 “small” kits in the third series all feature dinosaur-like mechs. You can get them individually for a very reasonable price (though you won’t get to choose which kit you receive). Or, you can go all-out and get a box of 8!

So far, there’s no news of a 4th line of Neko Busou kits, but our fingers are crossed.

In the meantime, get your own Funamori here!:
– Neko Busou 3 Funamori