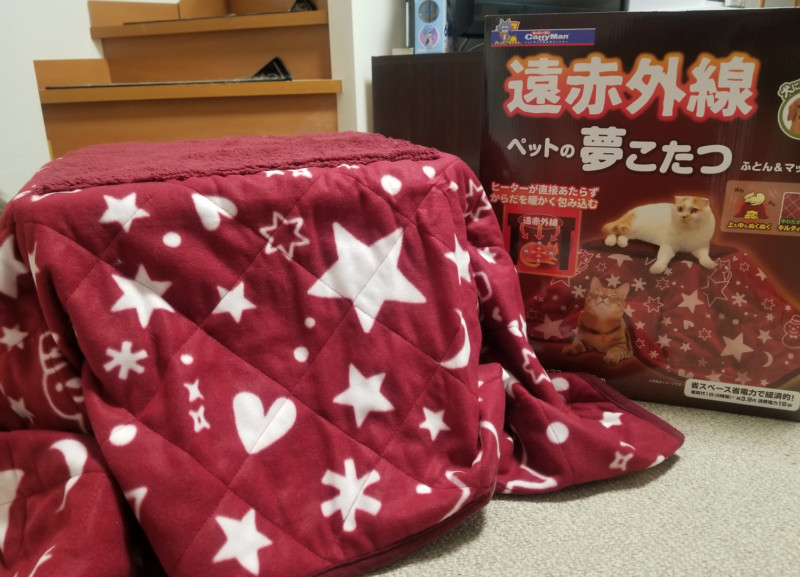 You may be familiar with the kotatsu, a low table covered in a thick blanket with a heater underneath, popular in Japan during those cold winter days. But you know who could use a heated table more than you or the other human members of your family? Your cat, of course! 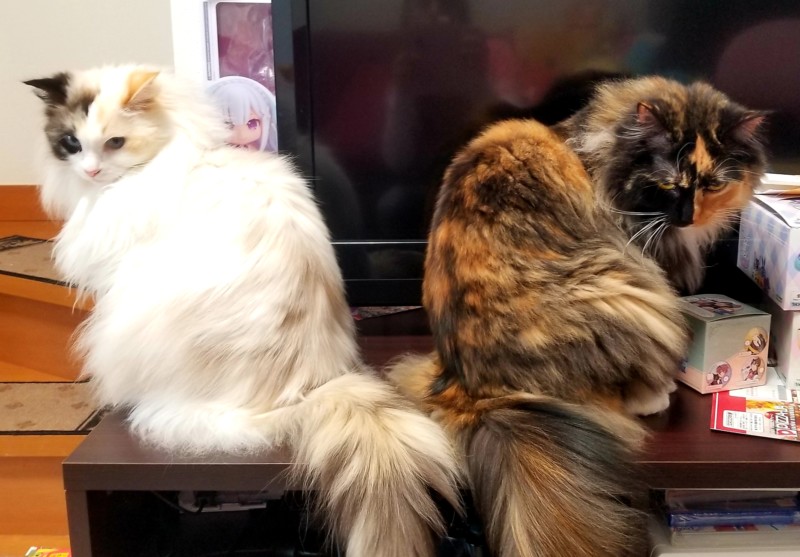 It’s no secret that our furry feline friends are attracted to anything warm, from our lap to our laptop, and every cozy section of our house in-between. That’s why I treated my cats Mugi and Yui (shown above) to the Far-Infrared Pet Dream Kotatsu with Futon & Mat by Doggyman! Never heard of it? Well, let’s take a look.

Assembly is easy. All you have to do is remove the table, legs, cushion, and blanket from the box and get to building! 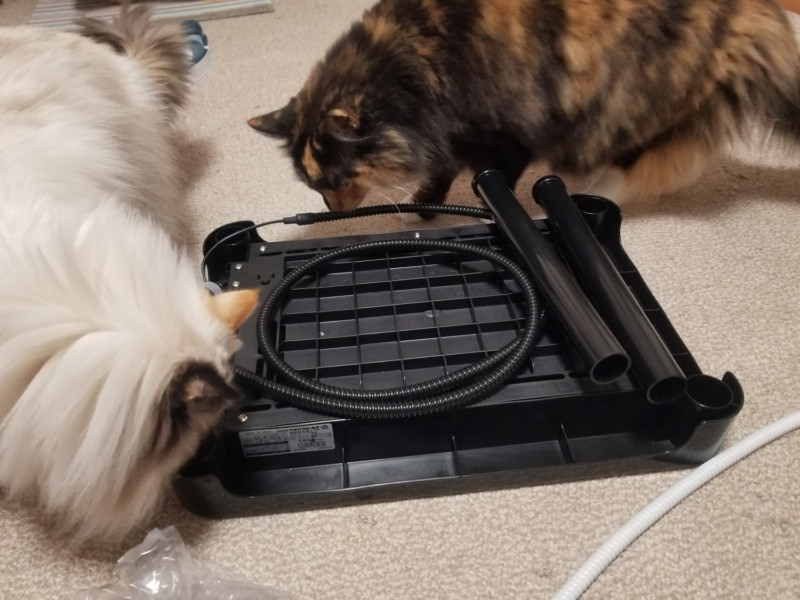 ….After your cats smell the table 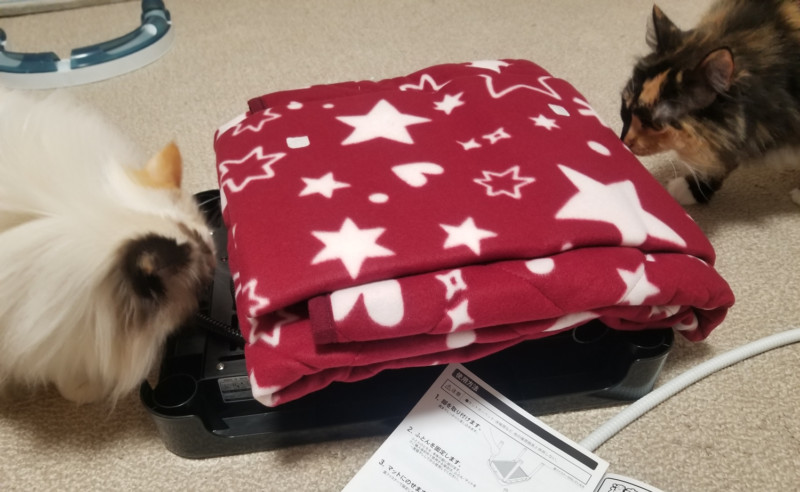 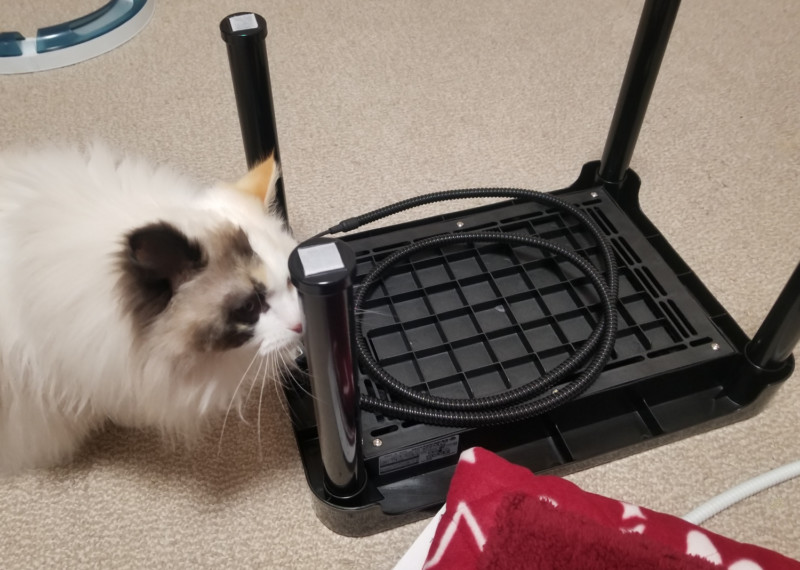 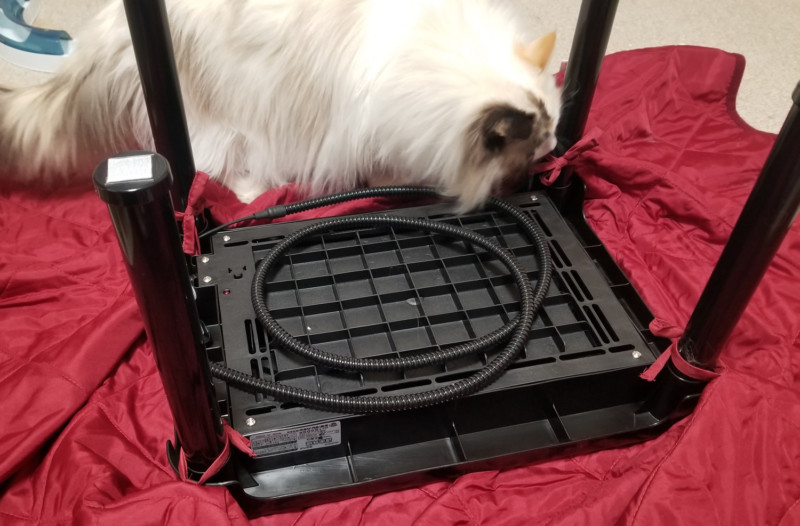 ….Then the table with the blanket tied to the legs. 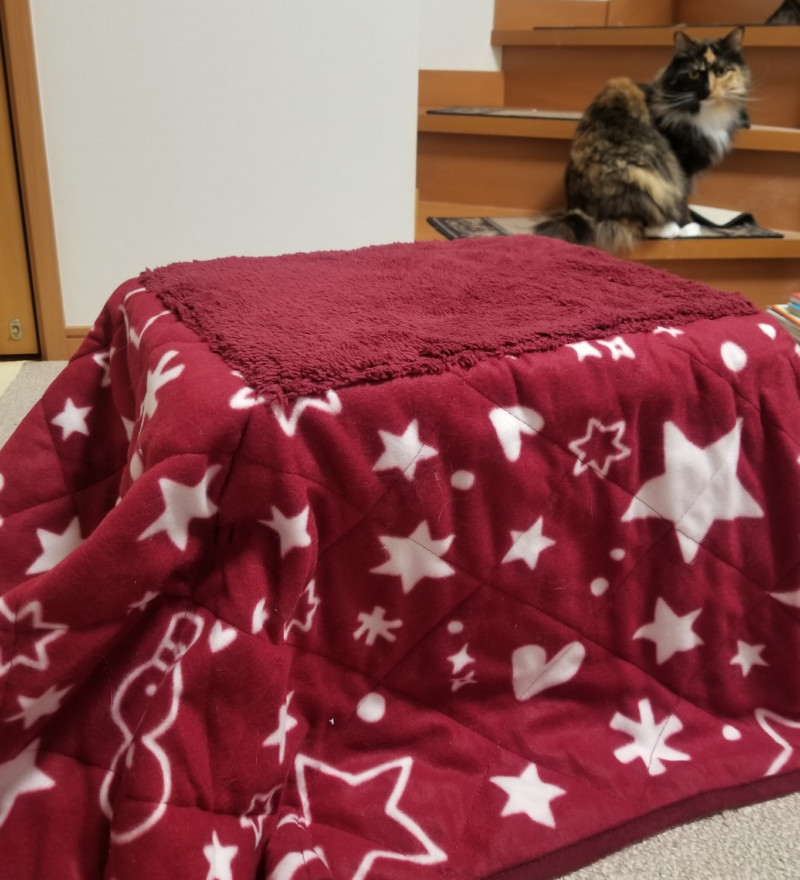 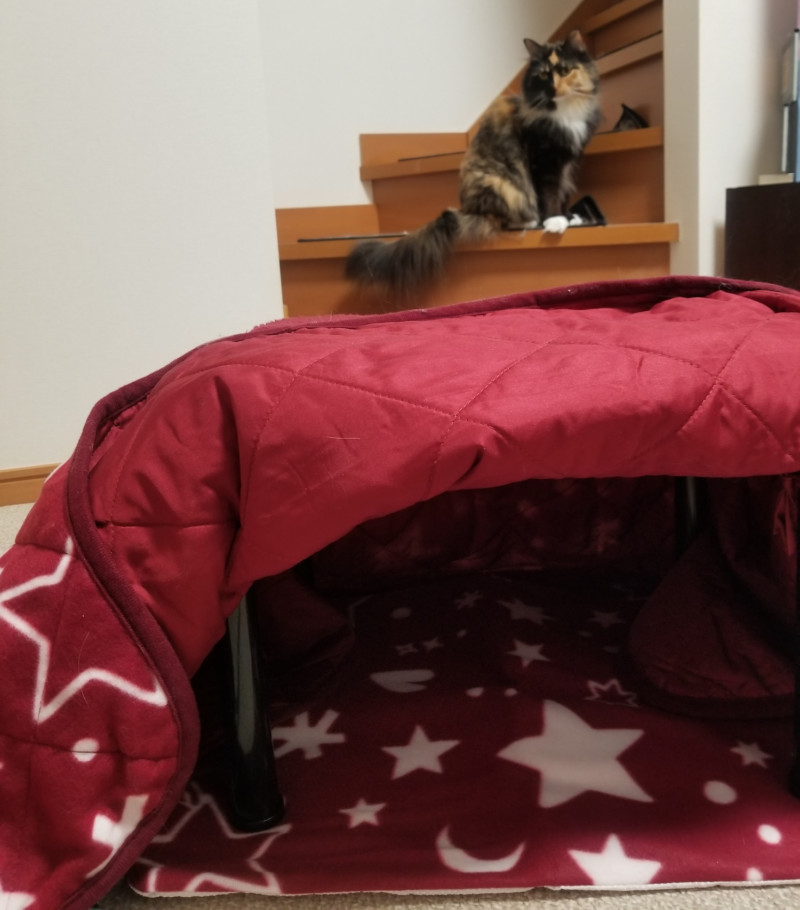 Well, at any rate, this took under 5 minutes to put together (if you subtract sniffing time), and doesn’t it look cozy already? It has a soft top, and the cushion attaches to those hook and eye loops on the bottom of the legs to give your cat a soft spot to lay both on top of the table, and underneath it! 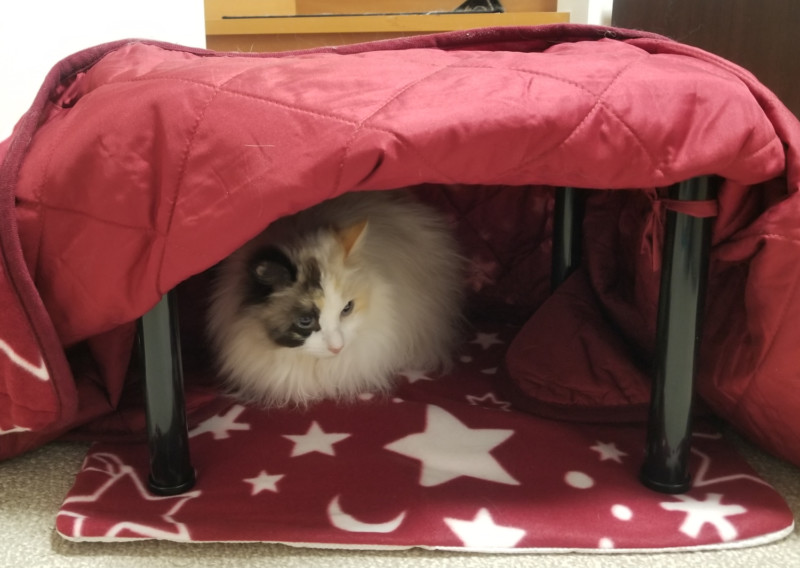 Mugi was eager to jump in from the moment I took out the table, and the heat isn’t even on yet! As you can see, it’s pretty roomy, and I’m sure two cats could easily fit underneath. (Not in my house though, Mugi hates Yui’s fluffy guts.) 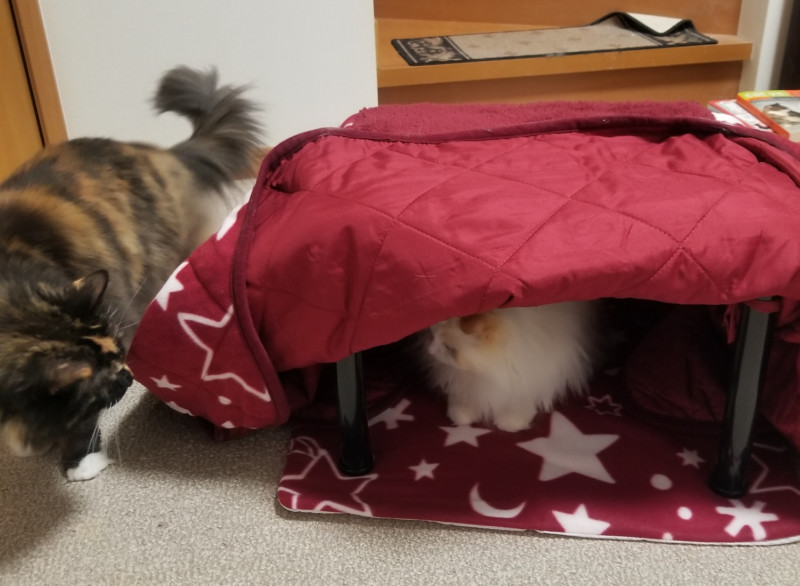 Yui’s eager to explore, too! Better pull down the blanket before the first neko-punch is thrown. 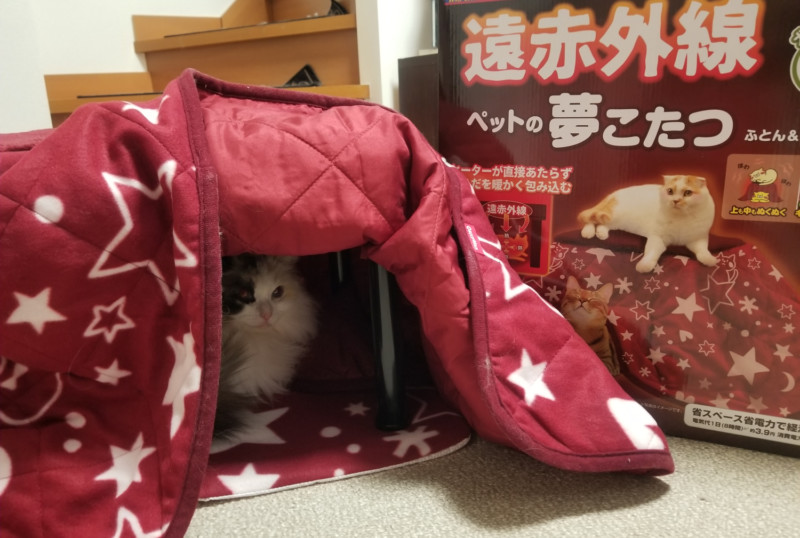 Direct quote from Mugi: “So comf. Much warmth. Thanks, mom!” 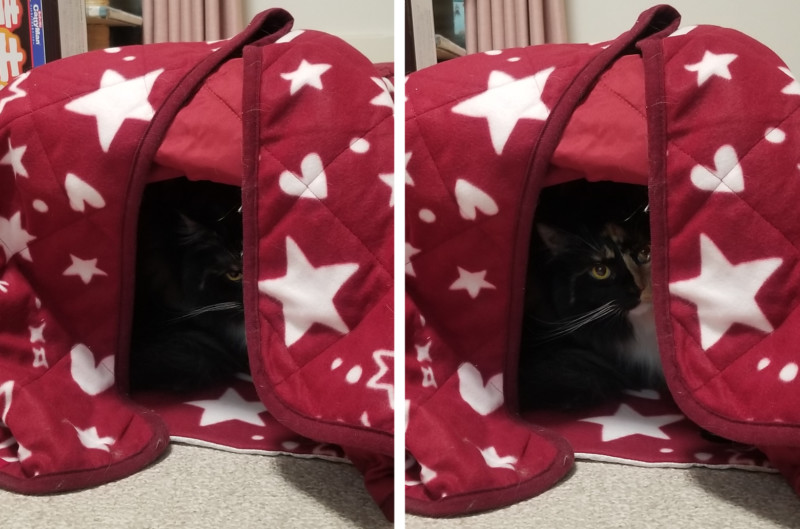 Don’t worry, Yui got her turn, too! And she wanted me to tell you that she’s really good at hide and seek (when the orange half of her face isn’t showing).

Overall, I’d say this is a must-have for cat owners. Not only does it provide a safe place for your cats to seek shelter under when the vacuum is around, but the heat will keep them so cozy, that you’ll have a hard time getting them out of it! The top of the table is warm as well, providing two spots for them to curl up on.

If you don’t have a cat, it also makes a nice foot warmer! Just sayin’.

We wanted a second opinion in case we just got lucky with Lindsay’s cats, so we sent the “cat-atsu” off to family friends of Dave’s to see how their shorthair cats, Kiko and Chiko, took to it!

With Kiko being on the tubby side, we were especially interested in seeing how the size worked out for our metabolically challenged friend. 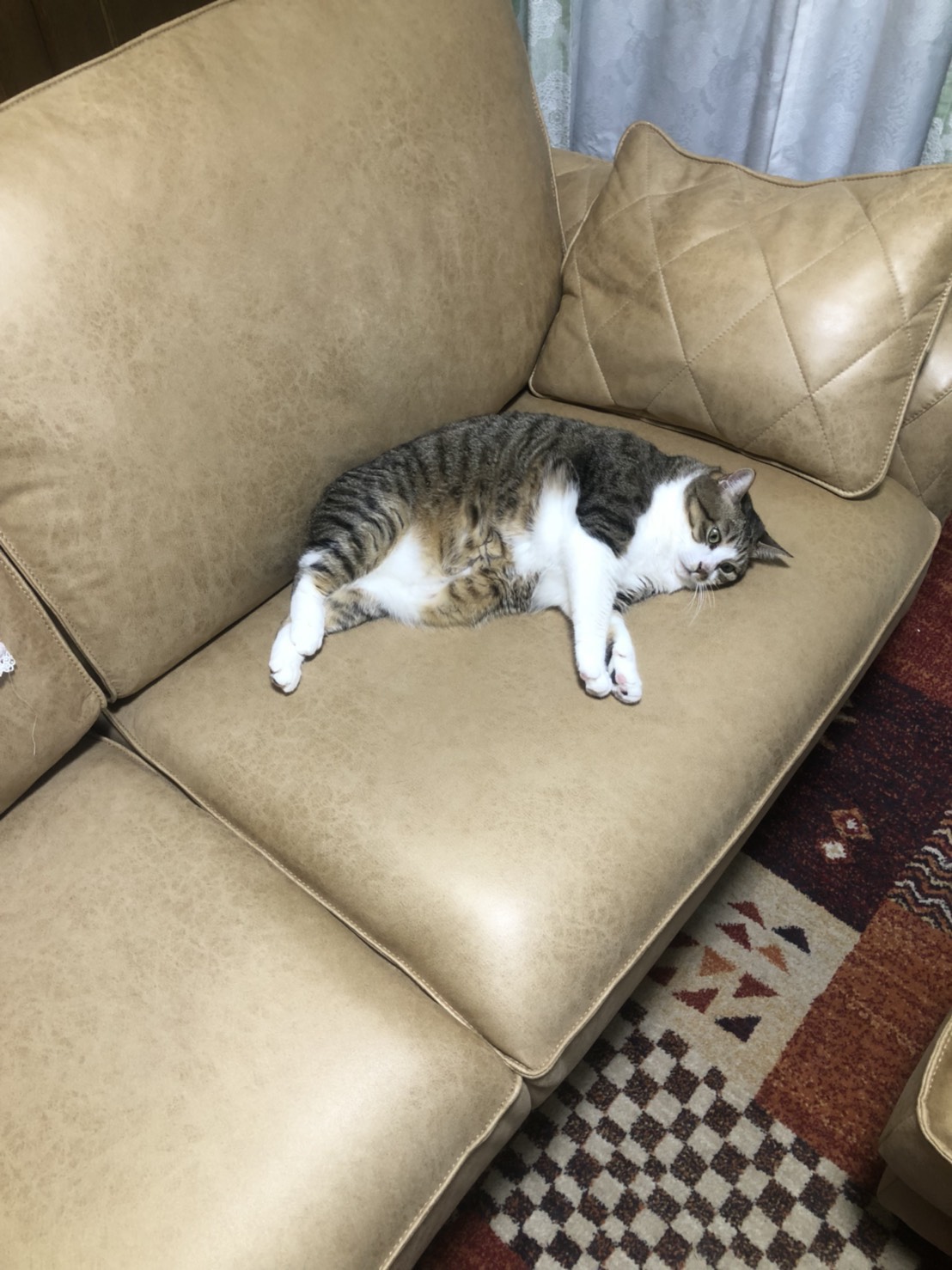 Even without turning on the power, the kotatsu offers a hiding space that the cats seem to enjoy. 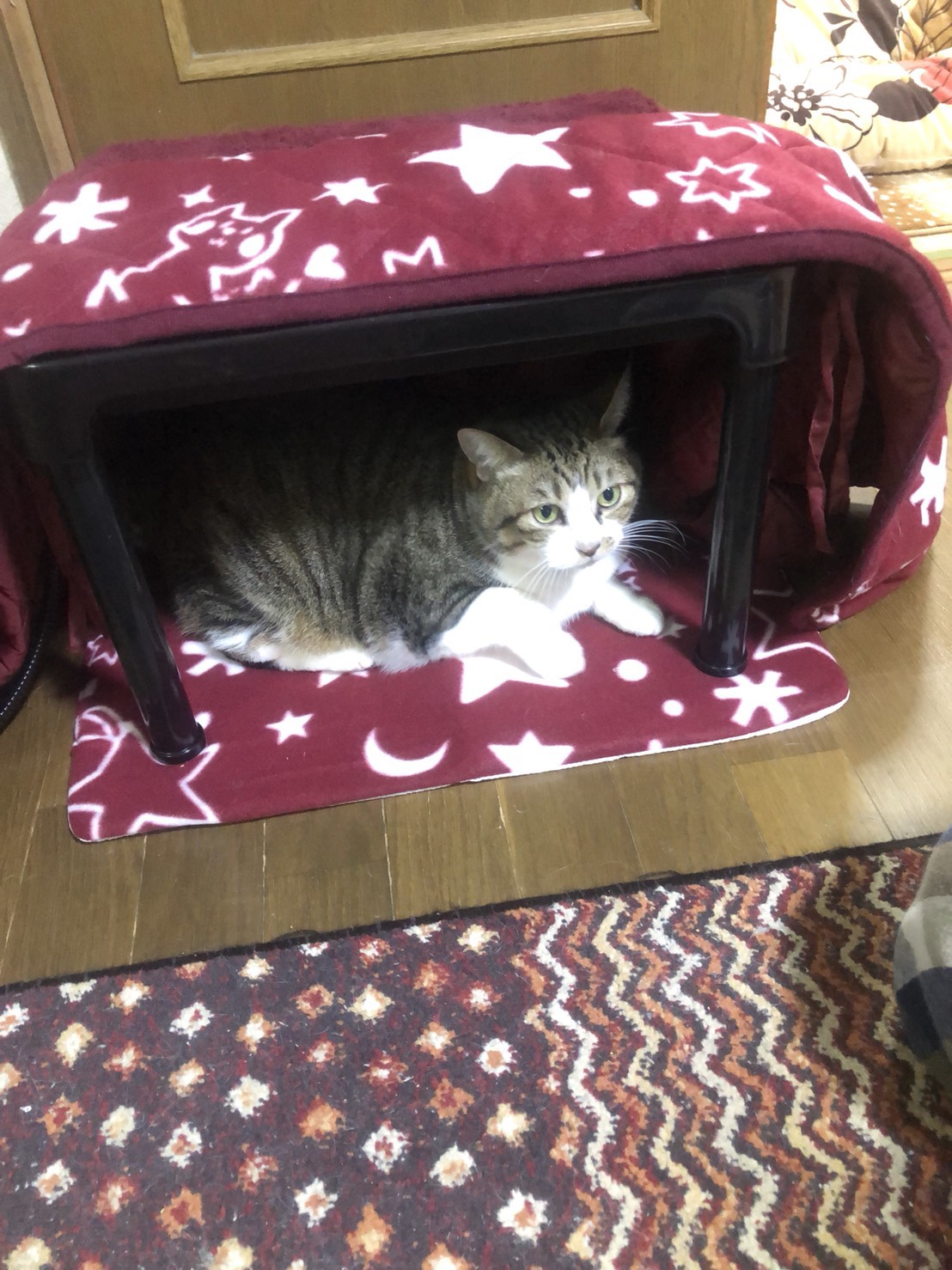 The cushion is a little flat, though, and may be more comfortable for the cats with a little extra padding (like folding a blanket on top). There’s a piece that prevents the cushion from sliding around, which is great for active kitties! 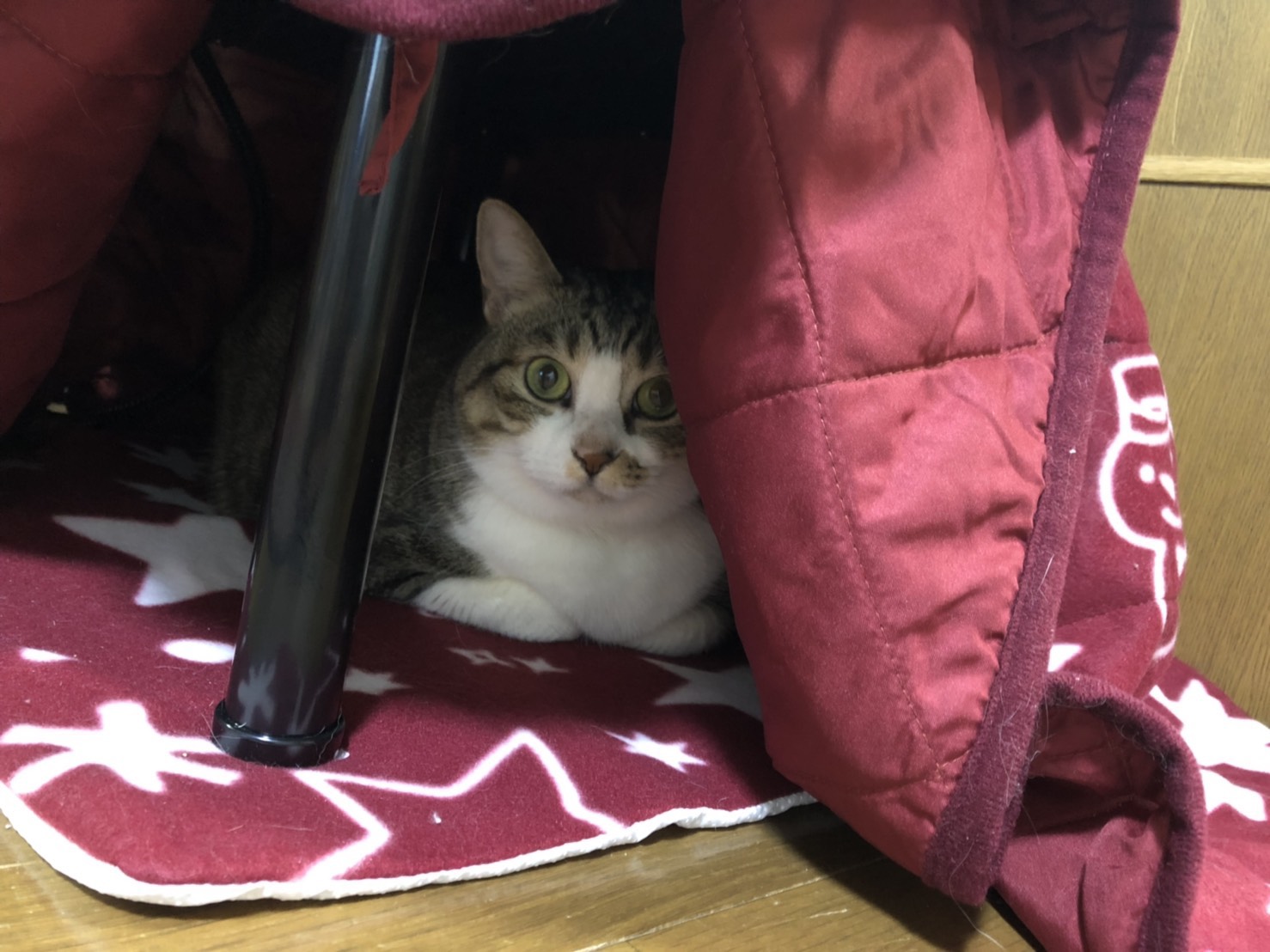 The space inside the kotatsu even suited the larger cat with plenty of space to get comfy. 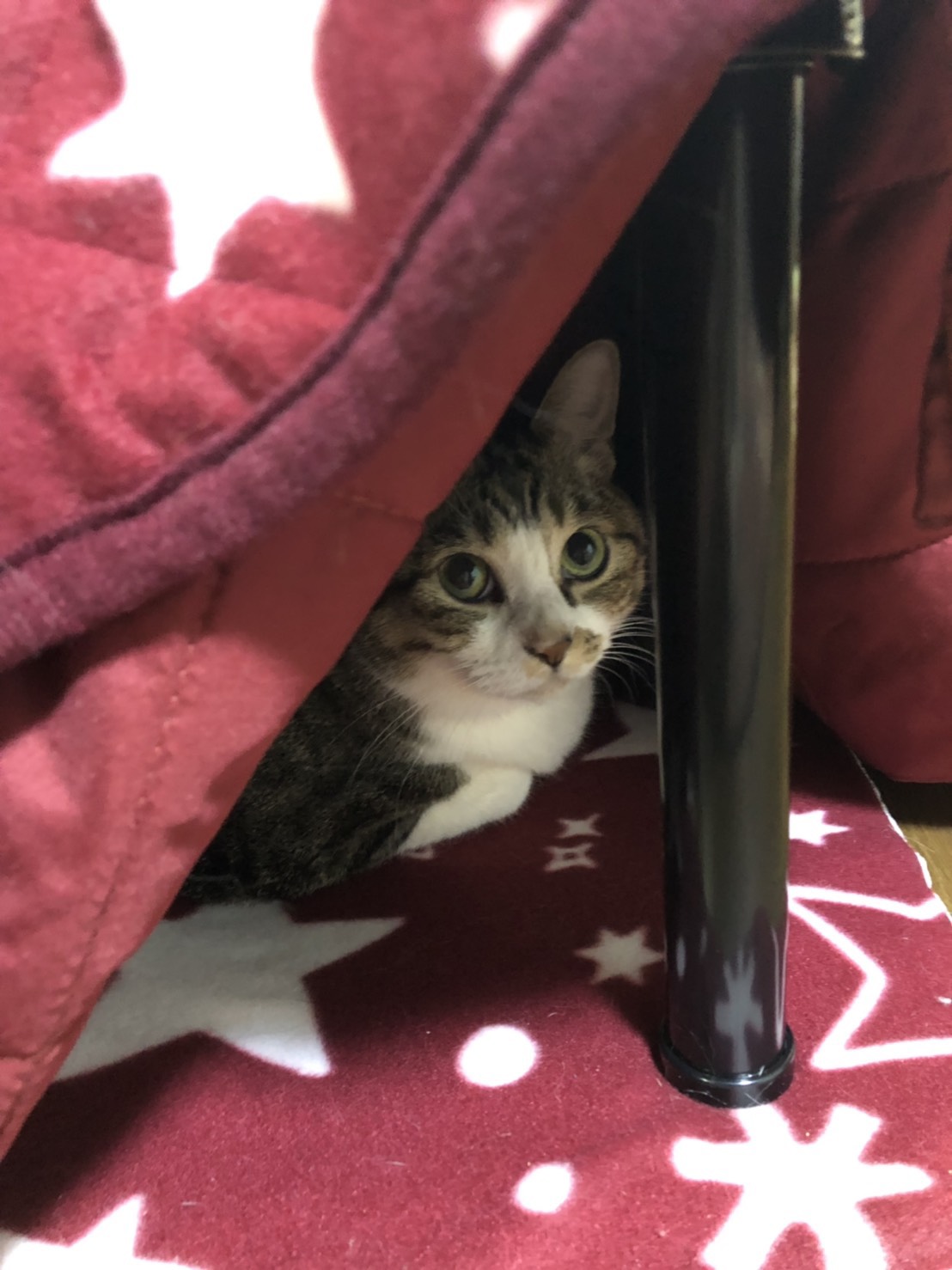 The cats enjoyed perching on top of the kotatsu just as much as huddling up inside.

It’s not very cold this year in Kagoshima, where these little (and not so little) kitties are, but their family has the feeling that during colder times they would probably never be able to get the cats to leave the kotatsu space…