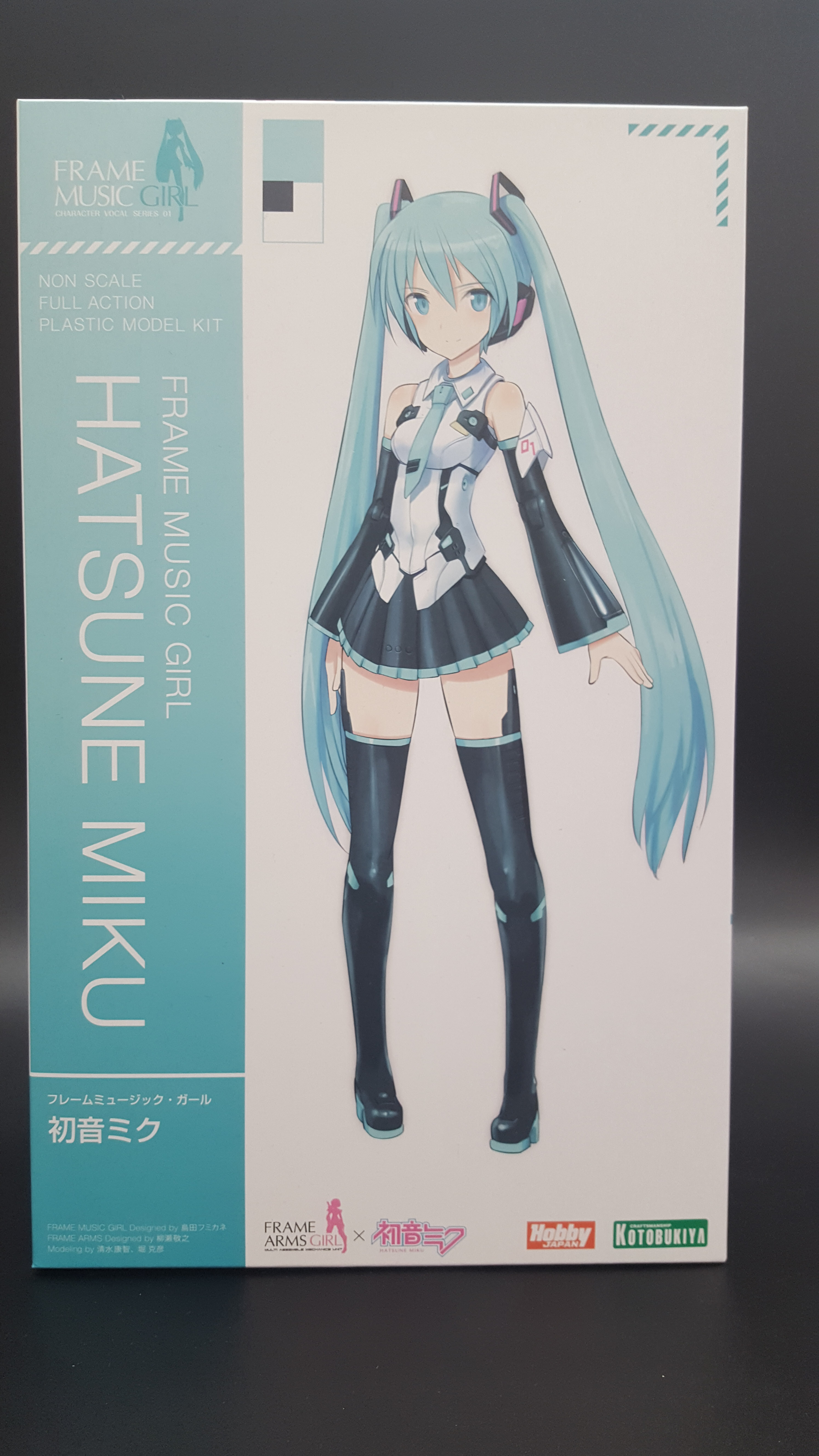 This is the second release of Kotobukiya’s lovely Frame Arms Girl version Hatsune Miku model kit! She comes molded in an impressive array of plastic so you can get a great display piece built just from what’s included in the box, and she’s snapfit for easy assembly, making her a great fit for fans of Gundam models that may want to branch out a bit. Let’s see what possibilities this Miku has to offer! 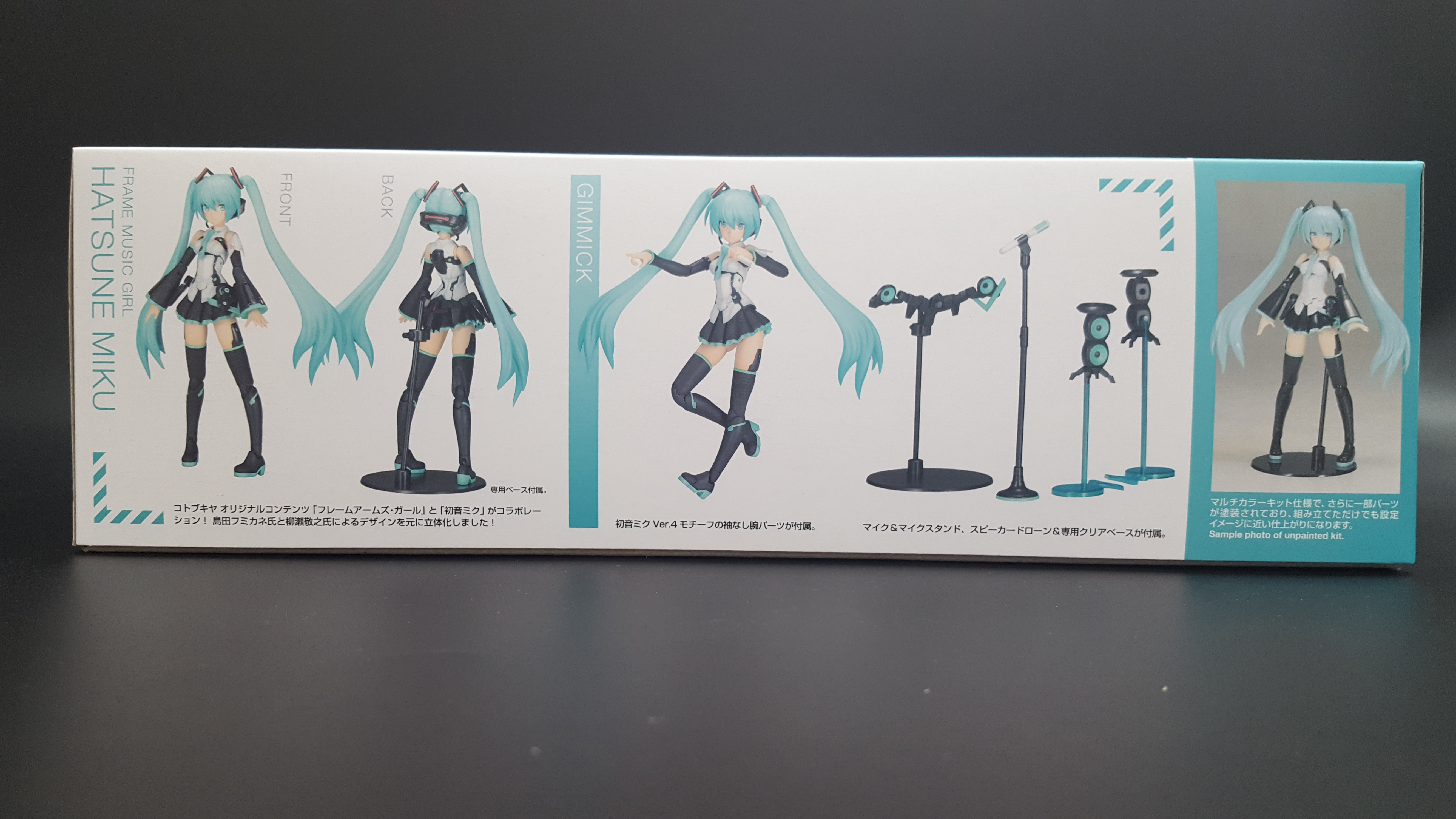 Unlike Bandai, Kotobukiya’s box sides are only in Japanese. But what you can see here are a front and back view of a display version of the kit on the left — that means she’s been painted. A welcome change from Bandai boxes, though, the far right image shows what the kit actually looks like completed without paint, so you can get a pretty good idea of what you’re getting out of box.

In the middle, we’re treated to a brief look at the gimmicks in this kit. Kotobukiya points out that alternate fitted sleeves are included if you’re not into the default bell sleeves.

Accessories include a microphone and stand, speaker drone, and specialized clear blue base parts. 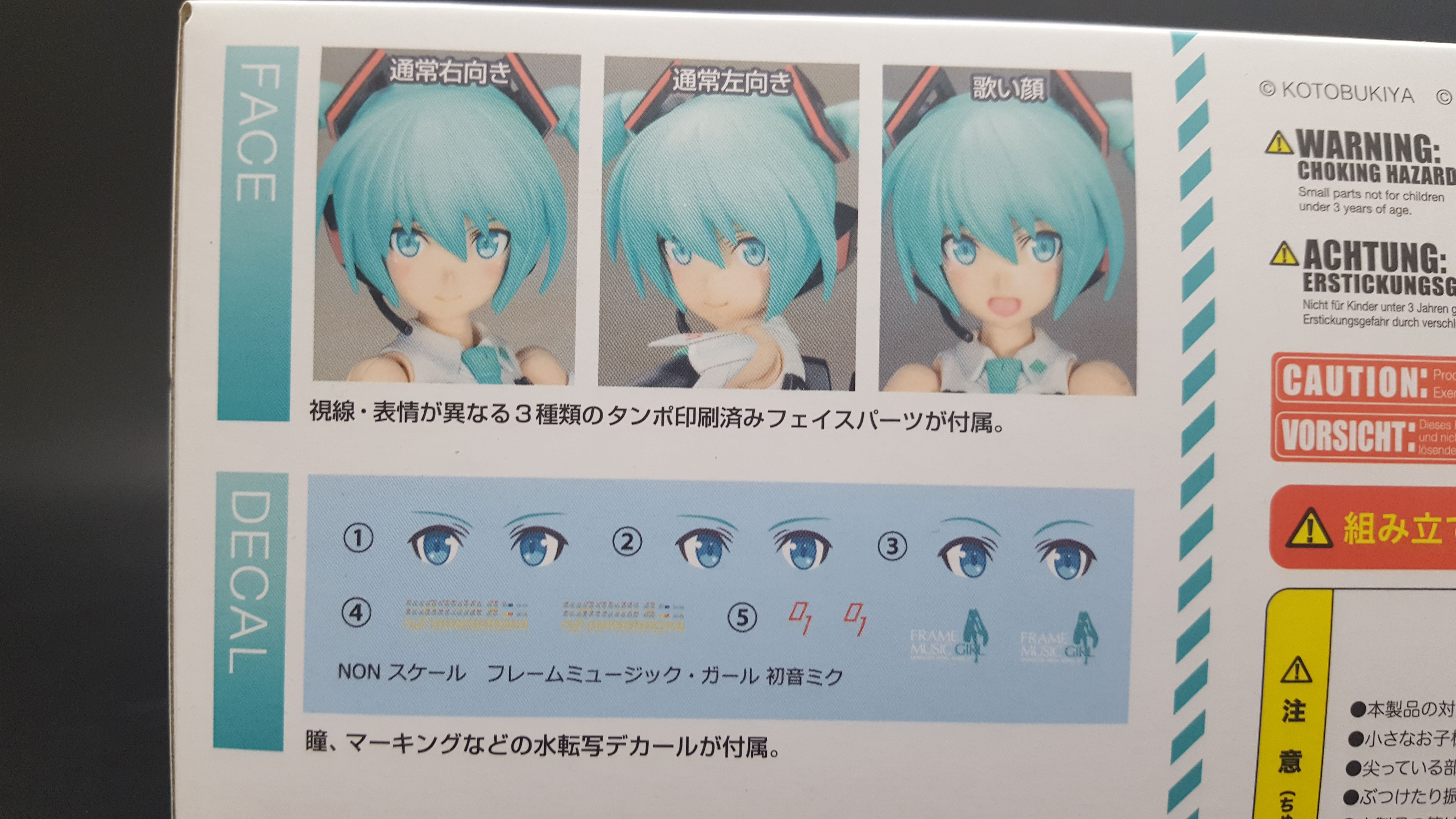 The other side of the box gives us a look at the faces. In typical Frame Arms Girl style, you get options here: 3 prepainted faces are included (shown on top), but you’ll also get a blank face and set of eye decals so you can customize Miku’s look if you don’t like the defaults. Runner A is in mermaid green, mostly for Miku’s hair. 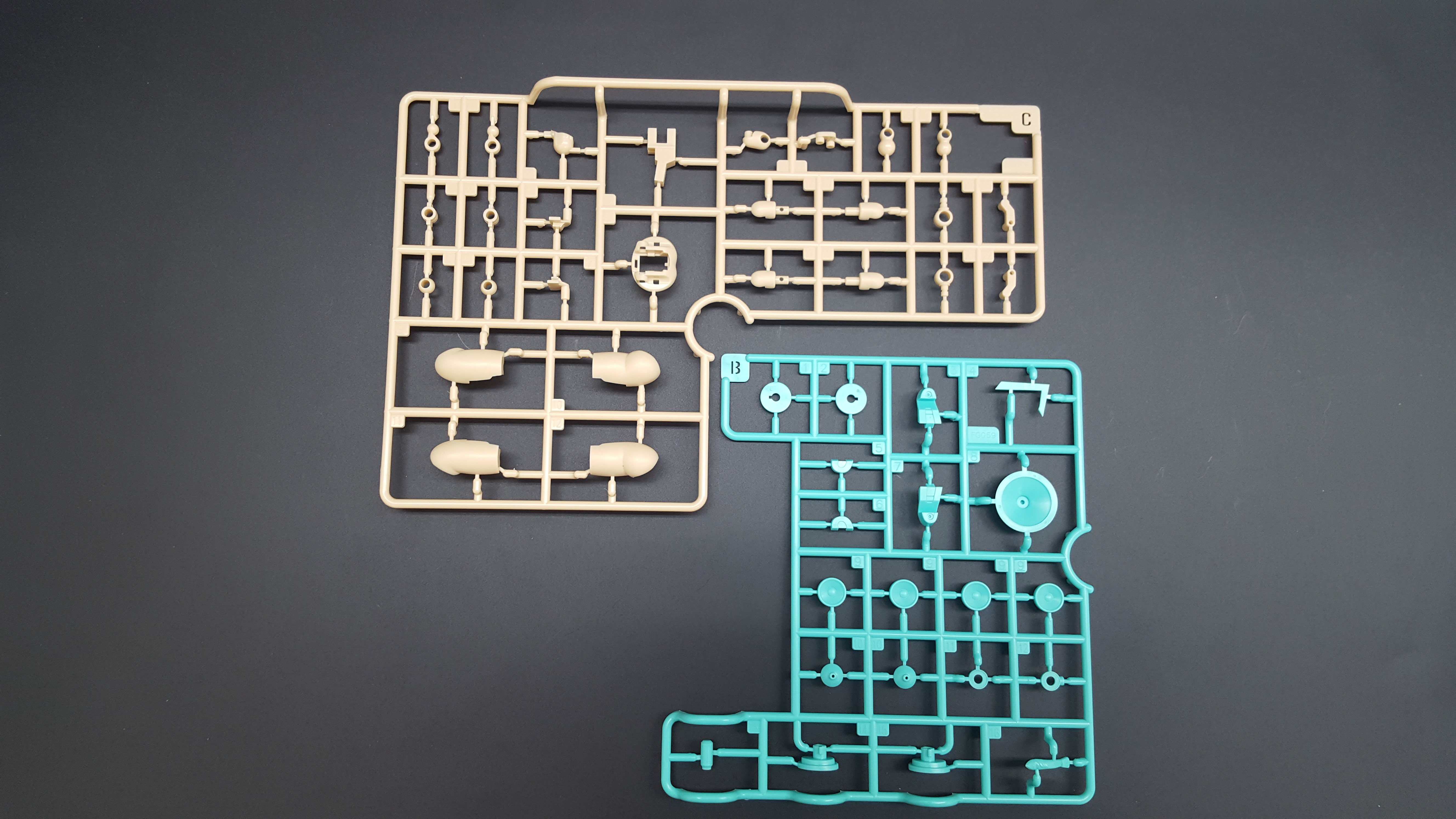 B is in the same mermaid green, but consists of small detail parts, with runner C in flesh done. There are mostly joint parts here, but what looks like Miku’s thighs are on the same runner. 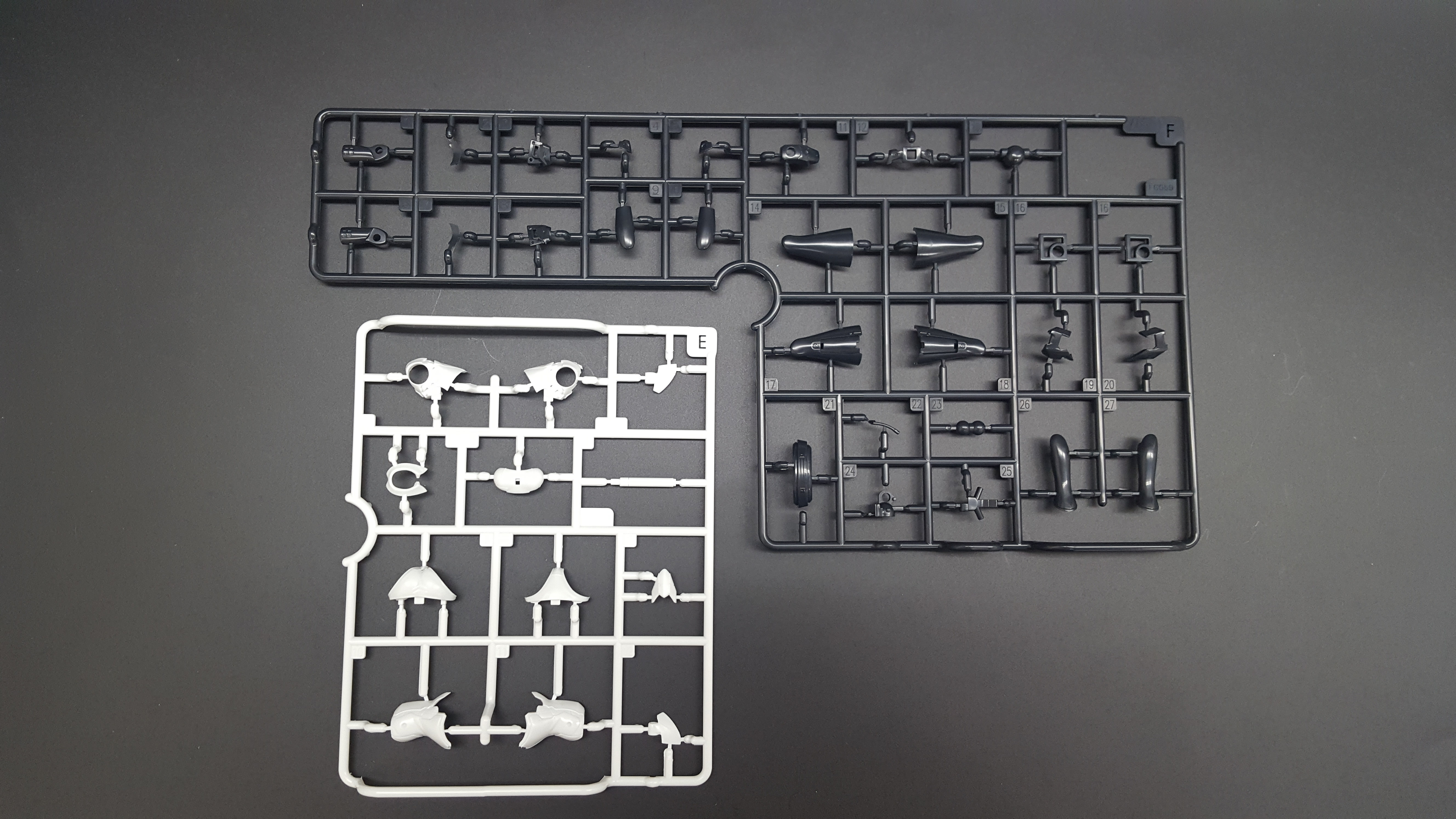 Runner E is offwhite, and runner F is black. Both of these runners contain clothing parts. There are two identical H runners in black, which are going to be used for the accessories detailed in the gimmicks section on the box. 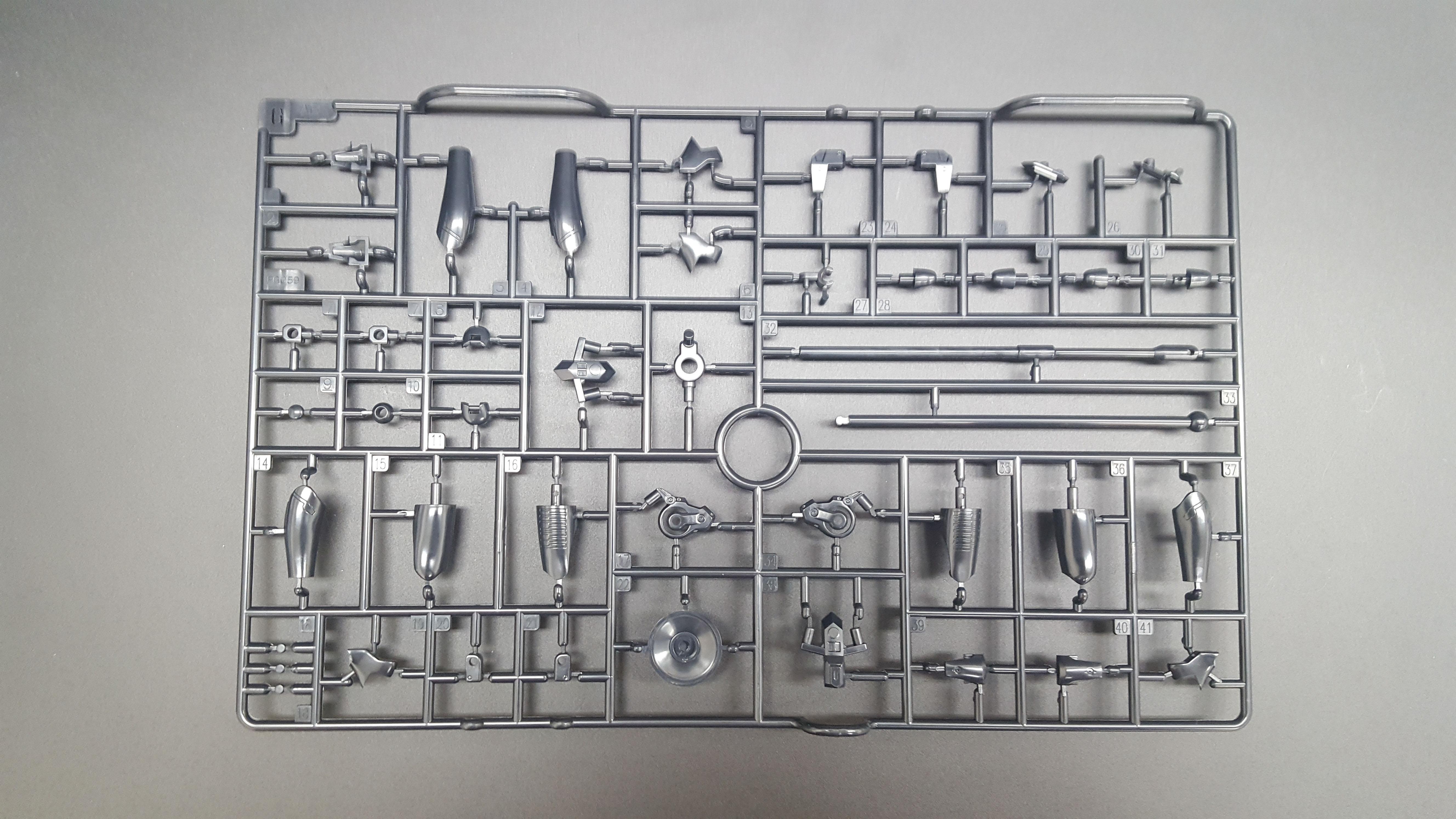 Runner G has grey parts with a sheen to them. To be honest, I’m not entirely sure what all of these parts are for; it’s possible that this is a reused runner and not all of the parts are needed to build Miku. That’s just a guess, though! Now we’re getting to the cool stuff. Miku comes with 5 types of hands, which have been molded in pairs and only have one attachment point to minimize nubs. These, like many other detail parts in this kit, come in individually sealed plastic pockets to prevent damage in the box. 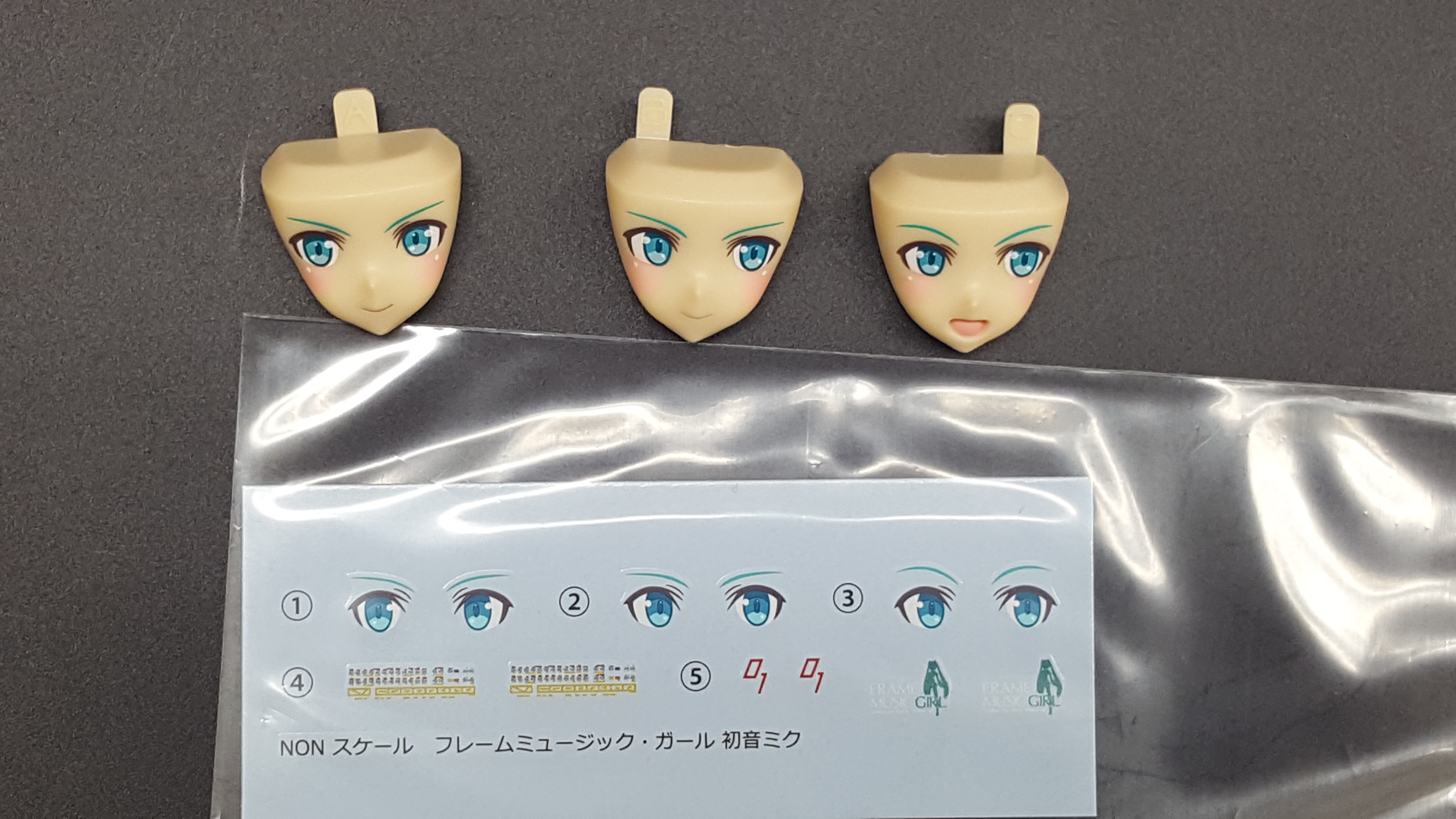 Sleeve and dress parts here, which are included without runners and come in two colors to minimize your paint efforts. These are also individually packaged. And finally, the miscellany! Here you have Miku’s display base, the clear blue accessory base parts, some additional flesh-tone joints, red parts for (I presume) her headset, and clear grey parts, too.

Overall, I’m impressed by the array of color to keep painting to a minimum, and the careful packaging to protect all the individual off-runner parts (and even some runner parts!)