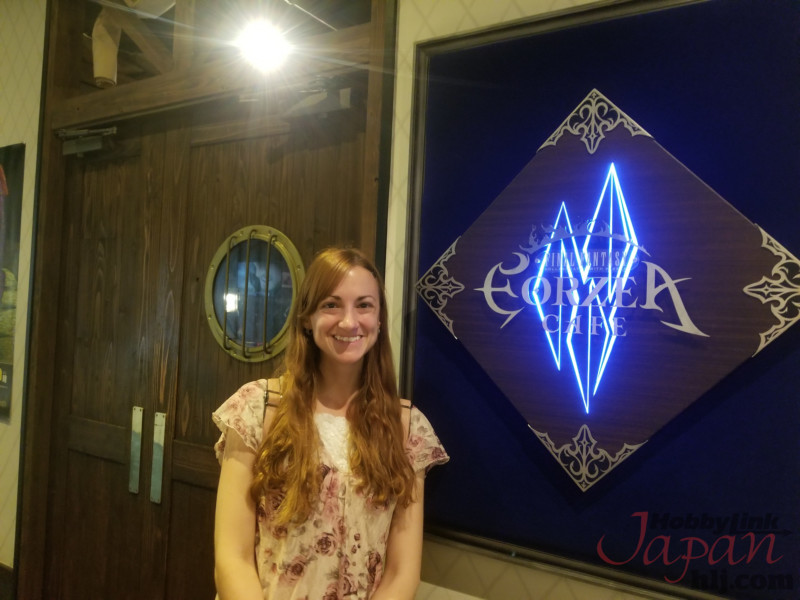 Lindsay in front of the cafe entrance

Recently, Lindsay and I were in Akihabara and skipped over to the nearby Pasela building for a late lunch. Pasela is mostly known for its theatric karaoke booths, but in Akihabara, collaboration cafes are another feature.

The Eorzea Cafe isn’t a limited-time collaboration cafe, but rather a permanent instalment that opened in 2014 and has enjoyed a whole lot of success since. (You still have to buy tickets in advance to get in!) 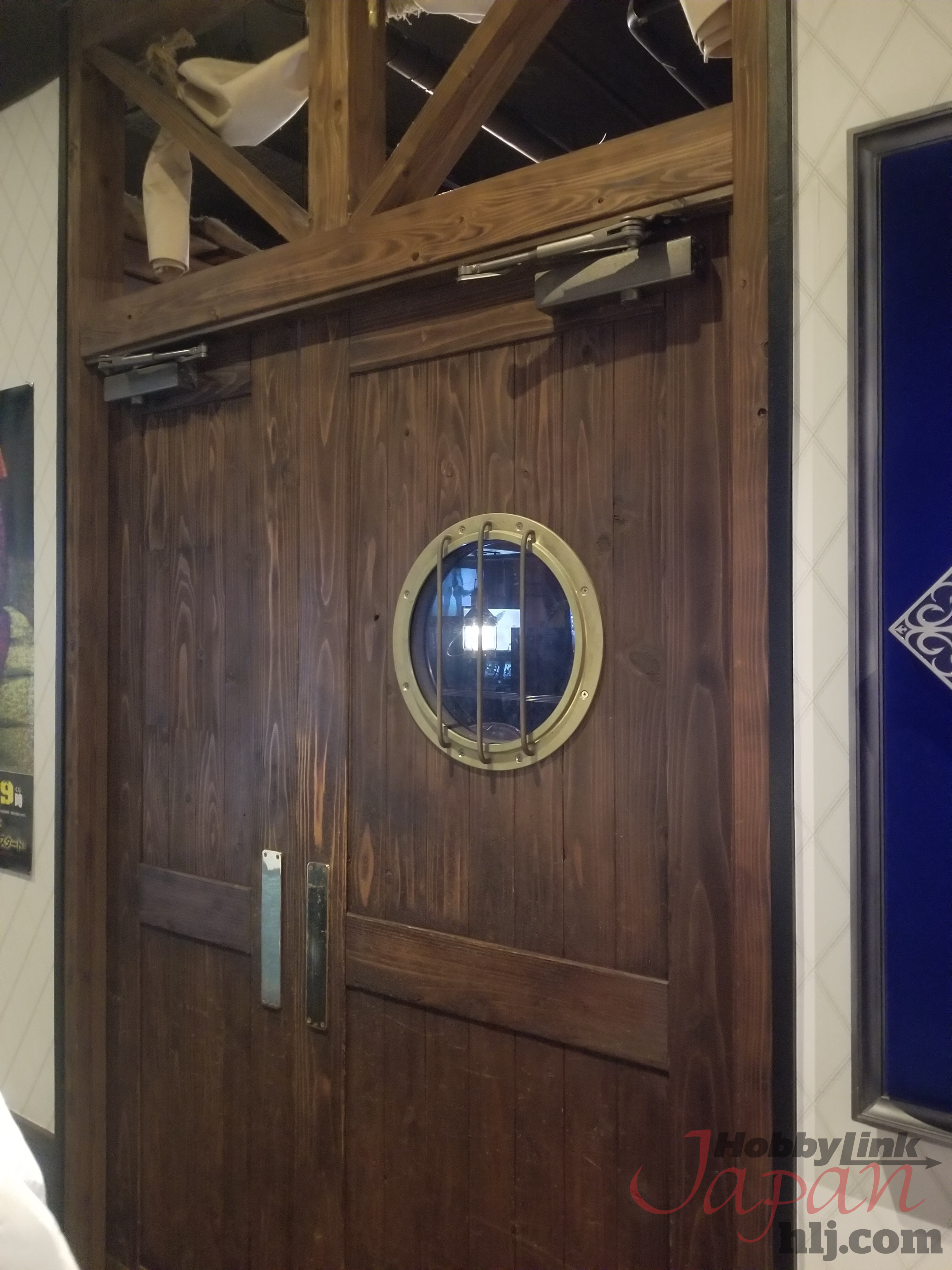 The door to the cafe

Tickets are sold in advance at 1,000 yen per person, and get you a 2-hour dining time slot and a drink included in the ticket price.

About 10 minutes before your time slot, you can head up to the second floor of Pasela, to the reception desk, and check in. When you do, your ticket is torn and you receive an iPad-like tablet menu, raffle tickets (1 per person), a coaster of your choice (each reflects a different in-game class), and an order sheet for your included drink.

Staff will then line you up and take your drink order while you wait. Then the doors are open, and in you go. 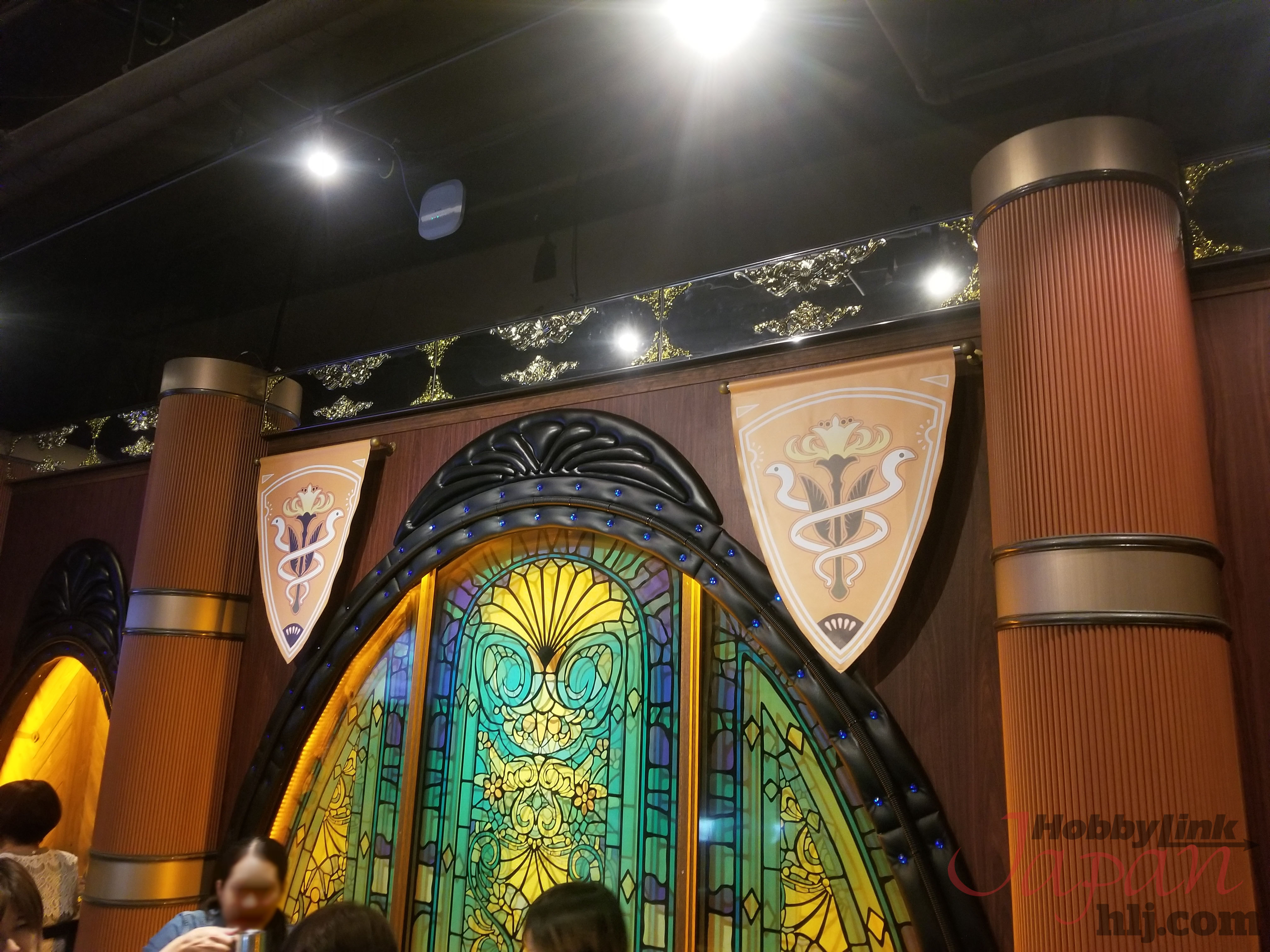 This is Japan, which means rules, rules, rules! From the moment you go in, there’s a lot to take in, and it’s all in Japanese. It’s mostly common-sense stuff, though: stay in your seat until the announcements are finished, order using your tablet, finish ordering before last call, and so on. There’s also a drawing after the reading of the rules, where diners can win small prizes like can badges, or the incredible Gold Saucer dessert that could feed a family.

The cafe itself is pretty small inside, with only a few tables that can probably only seat 30-40 people. The decor is modeled after the Carline Canopy from FFXIV, though of course, much smaller. There are a few online stations where diners can log into their FFXIV account and play while they’re there, and this section is divided from the rest of the tables with a wall right in the middle of the restaurant. Atop that wall is the centerpiece of the restaurant’s design: the Moogles. 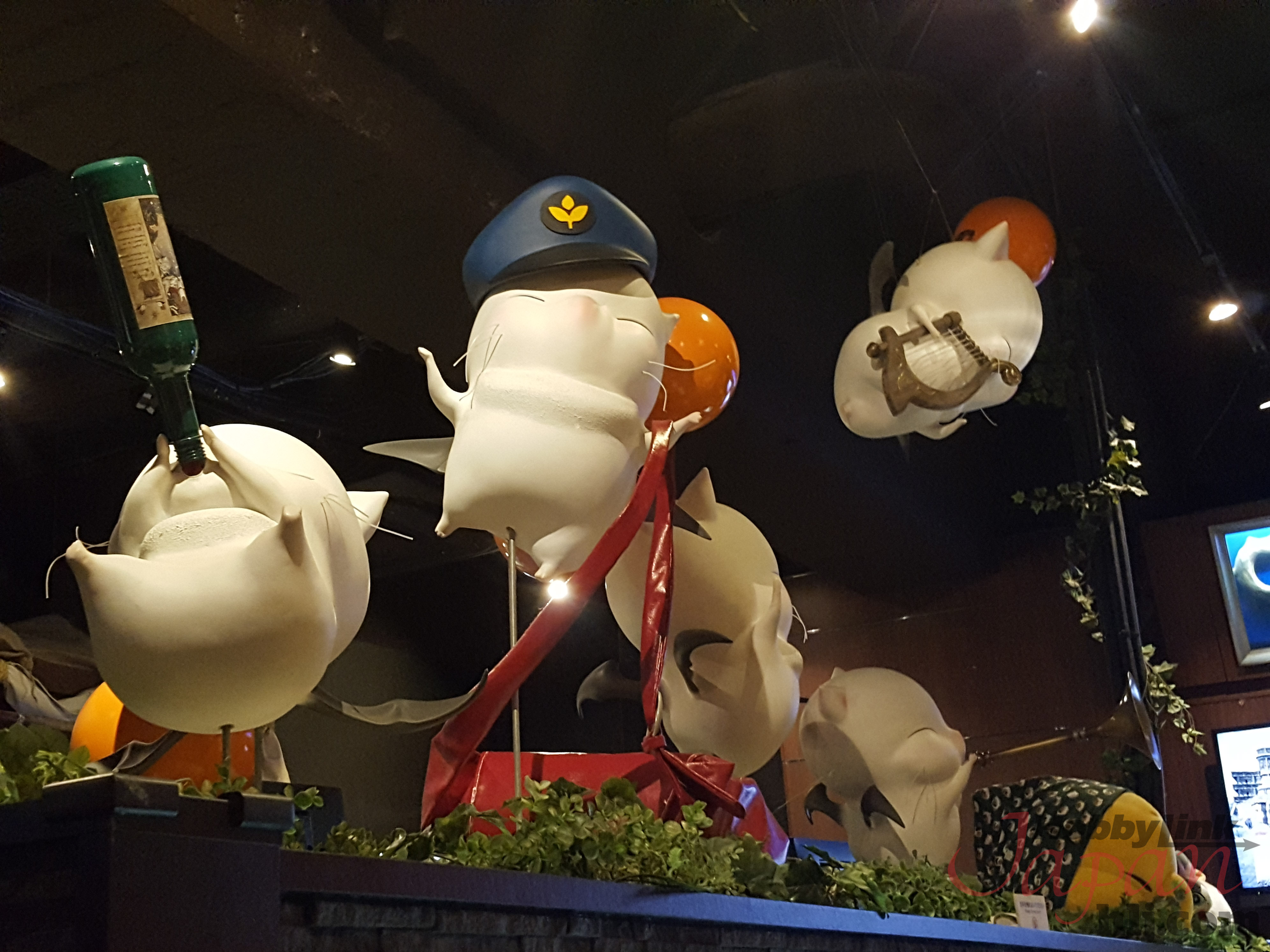 Moogles (and a Chocobo)!

An assortment of weapons also decorates the interior, one of just about every type of weapon seen in the Final Fantasy franchise. A sword, a staff, a gun, a bow — and more!

It’s worth noting that the menu seems to change, so anything we write about here could get cycled out at any time. This is pretty typical of restaurants in Japan, as it’s meant to keep the menu new and exciting to keep people coming back.

Additionally, the menu at the restaurant doesn’t always explain what’s in certain dishes, so we used the cafe’s English wiki page to help look at the dishes. Again — many of the items listed here didn’t make an appearance on the menu when we went, much to our disappointment!

As an aside: if you have any allergies or dietary concerns, you can always ask the staff directly about ingredients!

We wanted to try a variety of alcoholic and non-alcoholic drinks — there are plenty of both, so regardless of your favorite poison, you’re sure to find something you like! 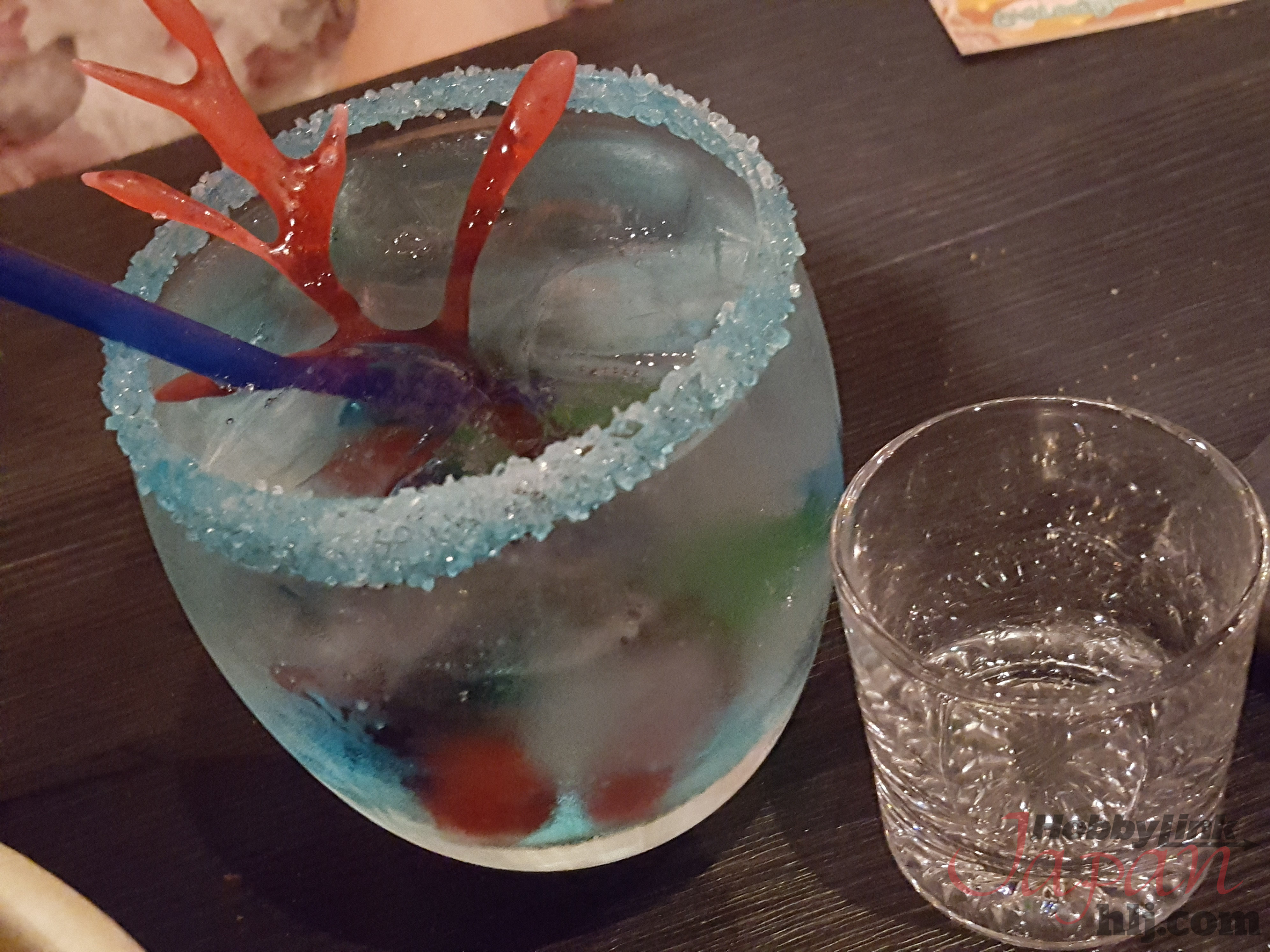 Ether
750 gil
Alcoholic. White sangria, banana collagen, grapefruit juice, sliced lemon, & kiwi. A nice citrusy punch! You only get a small glass, but for effect, staff will bring out a stylized carafe full of it to pour from (and for photos)!

Good King Moogle Mog XII
1,280 gil
Non-alcoholic. An entire pineapple… full of tapioca, pineapple chunks, assorted fruit, mango juice, and guava juice. I just had to order this (I love citrus — the Ether was mine, as well) and it did not disappoint! 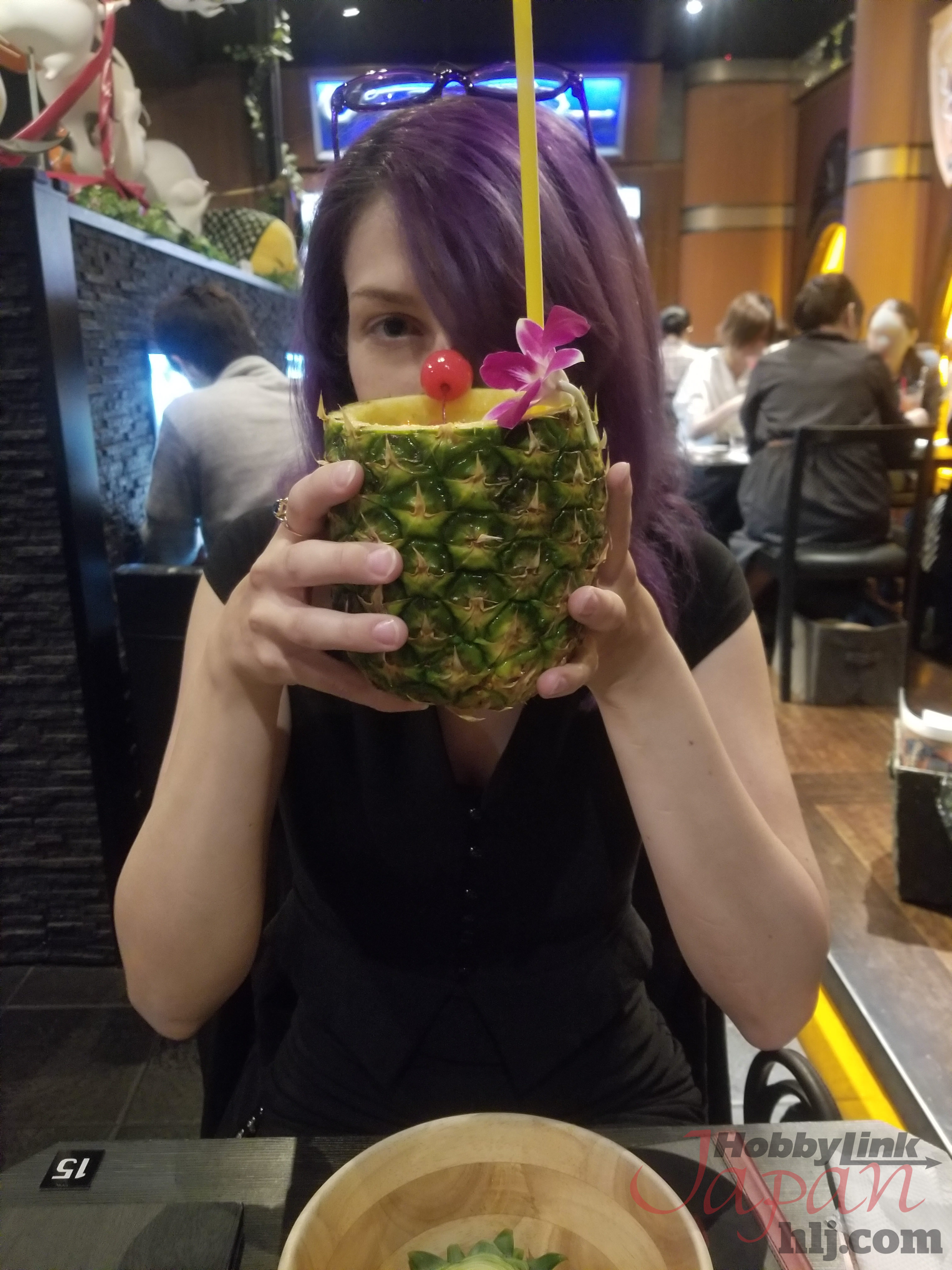 There is so much to choose from, we almost didn’t know where to start. It’s (almost) all themed after specific Final Fantasy characters, locations, creatures, and more, though some items are more “dressed up” than others. As we ordered, we went for a mashup of fun game reference items and things that just sounded delicious. 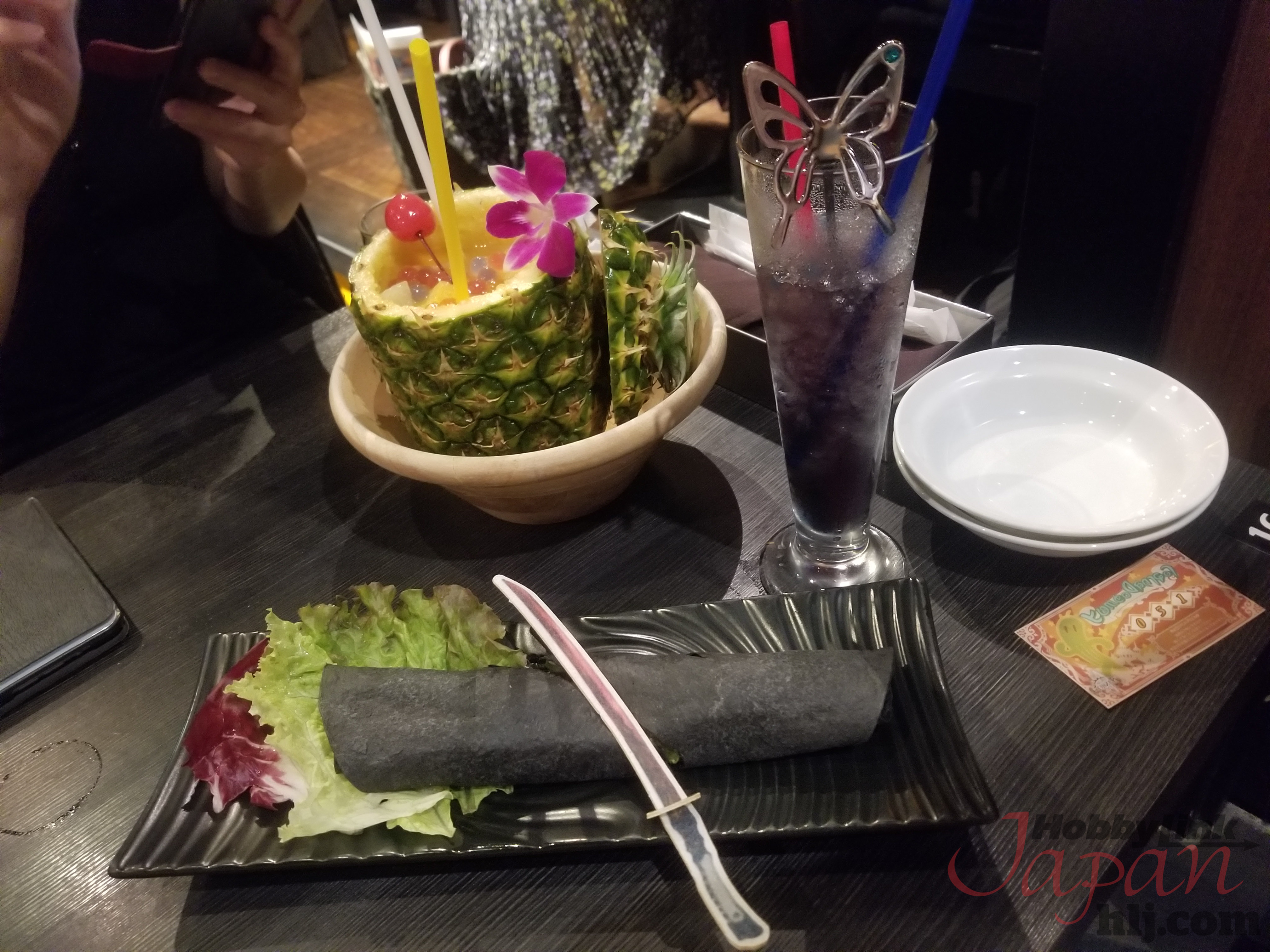 Zenos’ Halved Taco Roll
1,070 gil
A toasted soft-shell taco with a black tortilla with the usual sort of flavor you’d expect of a taco. It comes with an edible wafer of Zenos’ sword, too!

Cottage Cheese Fondue
1,280 gil
It’s not themed like anything Final Fantasy-related, but cheese is always a good choice for us. The fondue is served in a bread bowl made of two thick-cut slices of sandwich bread that have been toasted and stacked together. The parts that are cut out have been turned into dip-able bread sticks. Veggies and sausage are also included!

Tonberry Rice Omelette
980 gil
A pile of green Tonberry-colored rice topped off with fluffy egg, basil, ketchup, and butter… which is delivered to your table on fire as an homage to Tonberry’s lit lantern. We didn’t even know it came like this or we would have ordered it immediately just to see it! 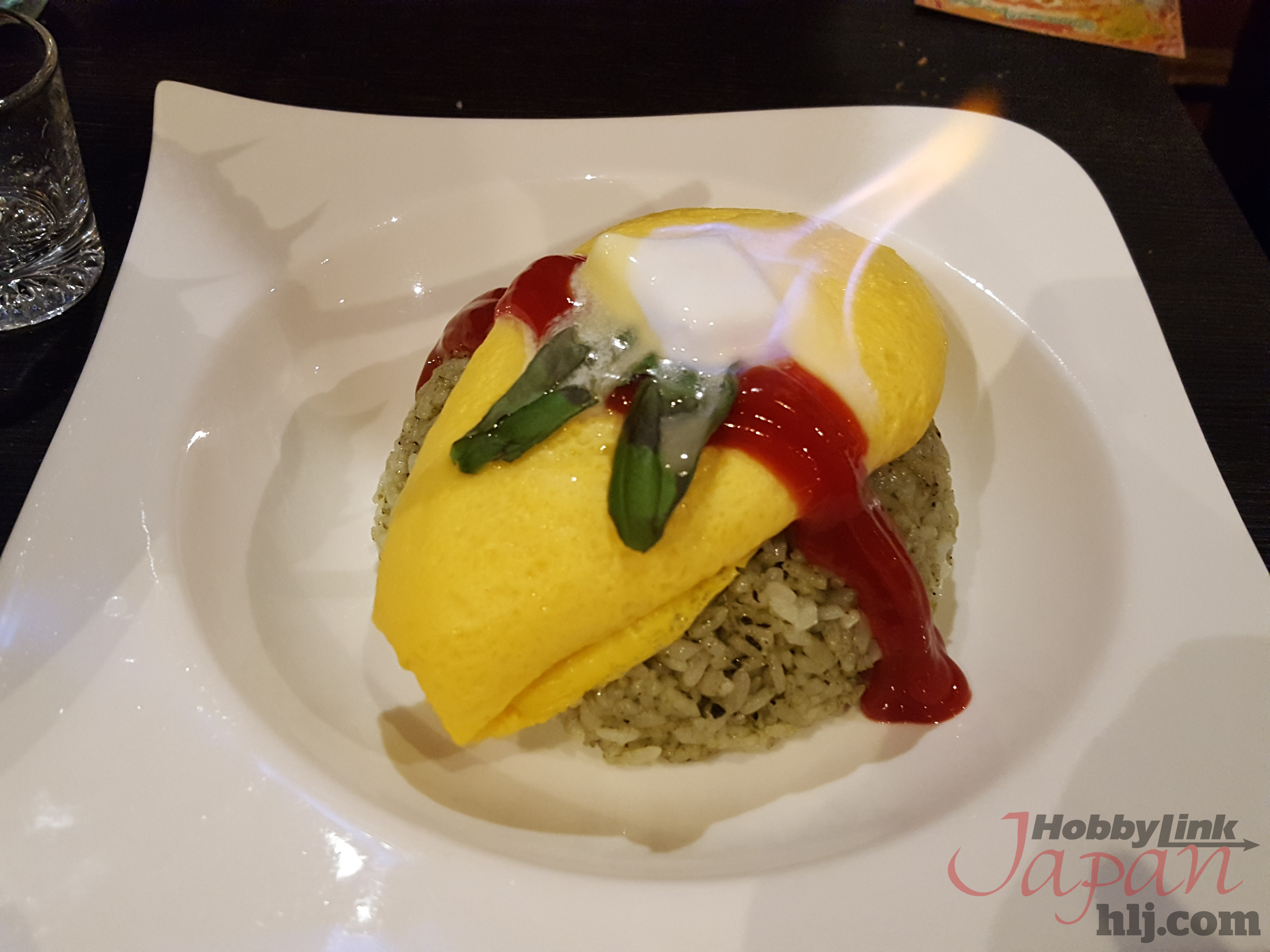 We were so stuffed from lunch that it was hard to agree on getting dessert, but we were determined to each at least try one! 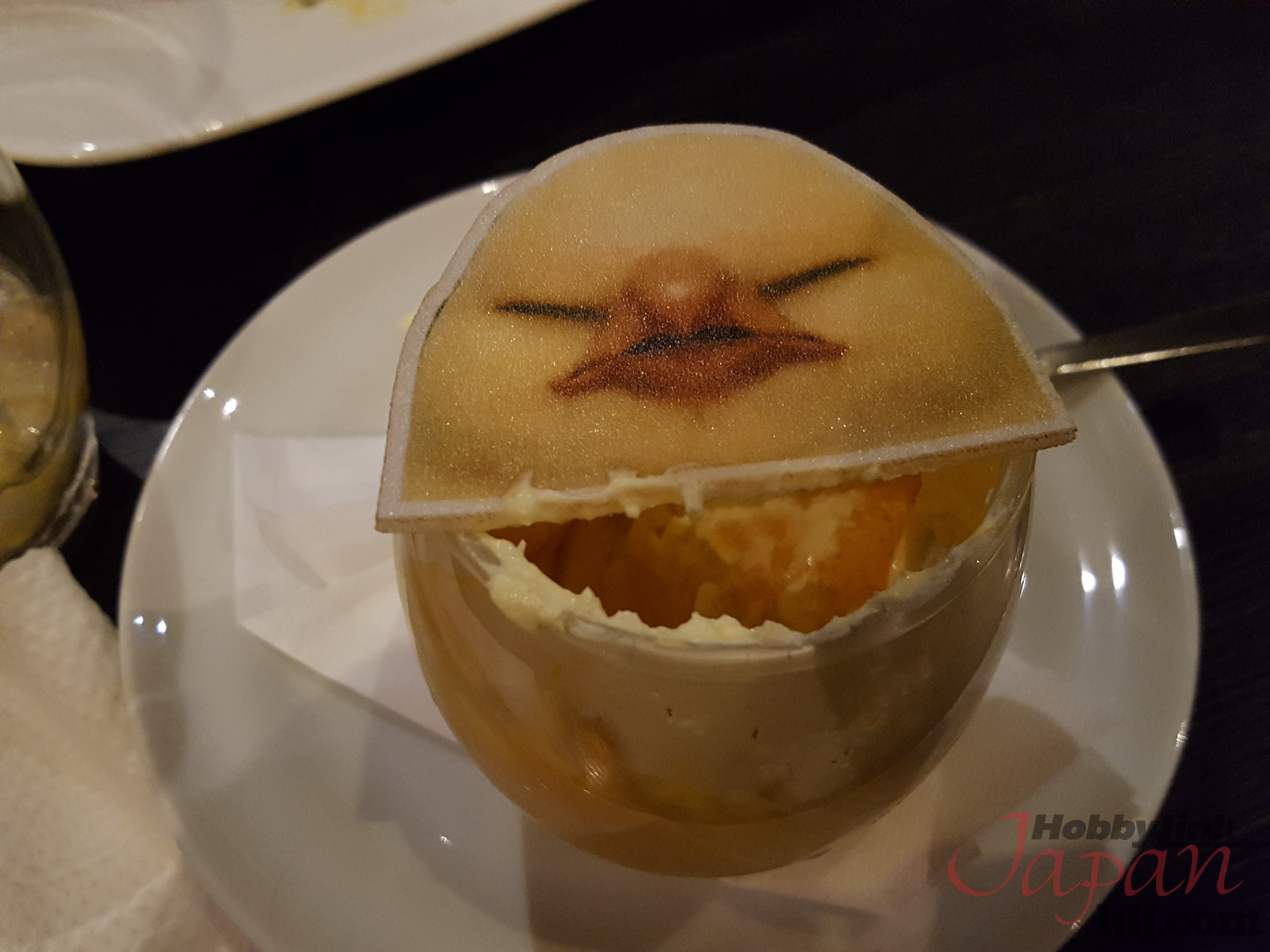 Minion Pudding: Fat Chocobo
650 gil
A mango-flavored pudding complete with chunks of mango, topped off with whipped cream and an edible wafer of none other than fat chocobo.

Creme Brûlée
630 gil
Not a Final Fantasy-themed dessert, but a dessert that both of us are suckers for. If you’re not familiar, it’s a kind of vanilla pudding topped off with caramalized, crunchy sugar! This one came with a dollop of whipped cream and berries, too.

What can we say? Everything we ate and drank was delicious, especially for themed cafe food. Given the chance, we’d both definitely go again!