The De Havilland Mosquito, dubbed the wooden wonder, is a twin engine, 2-crew light bomber that played a significant role in the fight for air supremacy over Europe in WW2. Powered by 2 Merlin engines, not many aircraft were as quick, or sounded as good, as the Mosquito. Acting as a reconnaissance aircraft, strategic bomber, and pathfinder, the Mosquito was well known and feared by enemy pilots. Now Tamiya has lovingly recreated this aircraft in 1:48 scale in three different wartime patterns.

I have chosen to replicate the camouflage Royal New Zealand Airforce 487 squadron aircraft operating out of RAF Hunsdon in Hertfordshire. This particular Mosquito was lost on March 26, 1944.

Adorned with beautiful box art, you can almost hear the roar of the Merlin engines just looking at the kitset. Inside are sprues molded in grey, and clear parts. The kit is jam-packed with a raft of parts to replicate the RNZAF plane, or the matte black night fighter edition; everything from rockets to 500lb bombs are included. 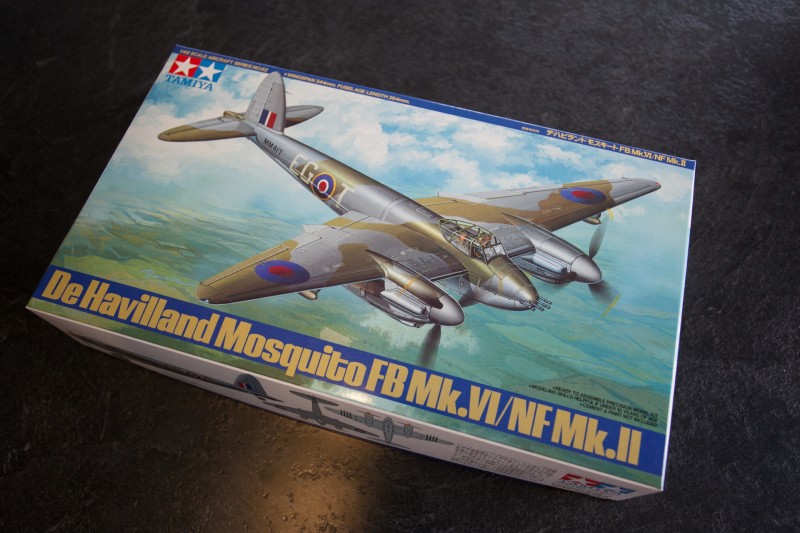 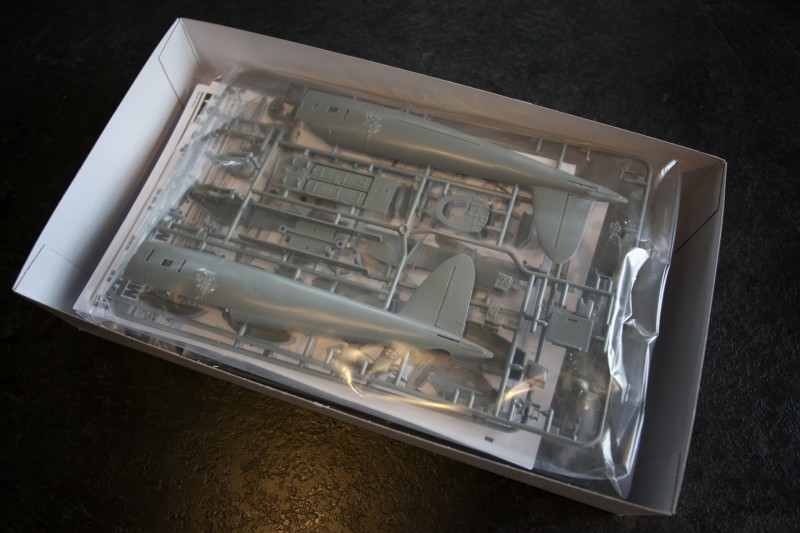 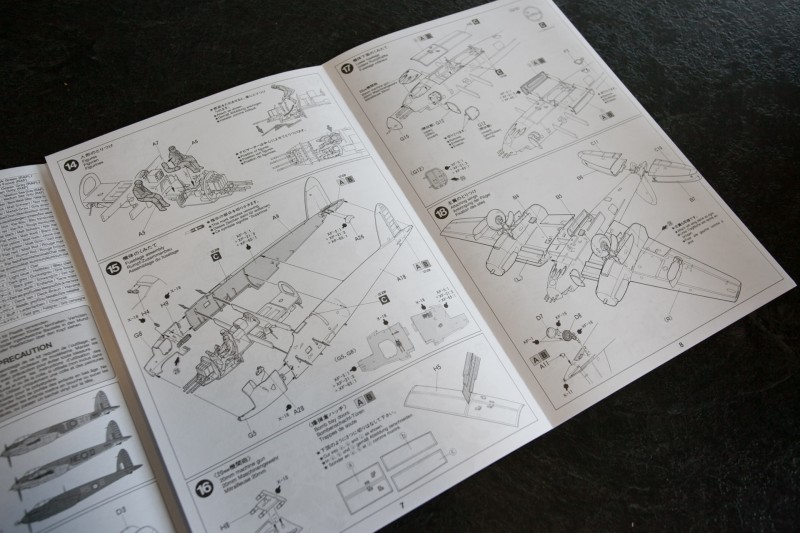 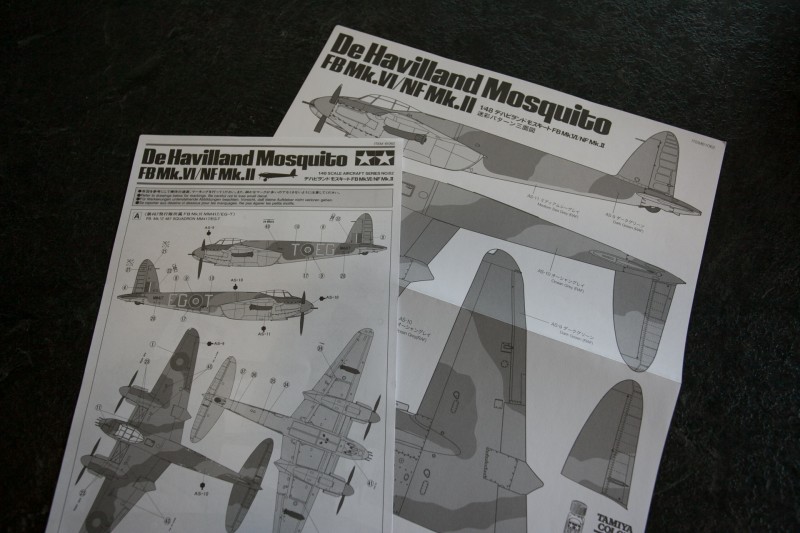 As this is a 1:48 scale kitset, there is a nice amount of base detail present. With a bit of extra room in the cockpit due to it having 2 crew, if you wanted to add a bit of extra detail then it is certainly worthwhile. I chose to add the Eduard photo etch belt and cockpit set to this model. The large clear canopy doesn’t hide any of your hard work once you seal it up, so I highly recommend adding it. 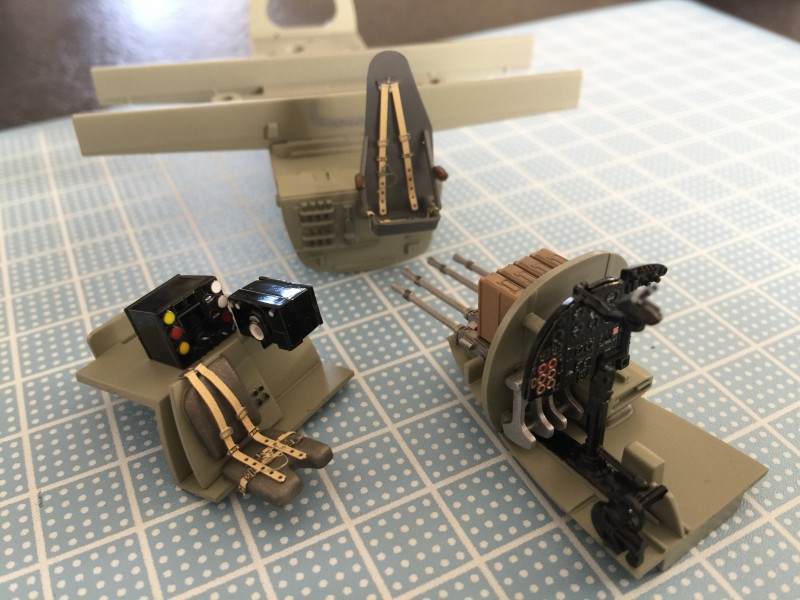 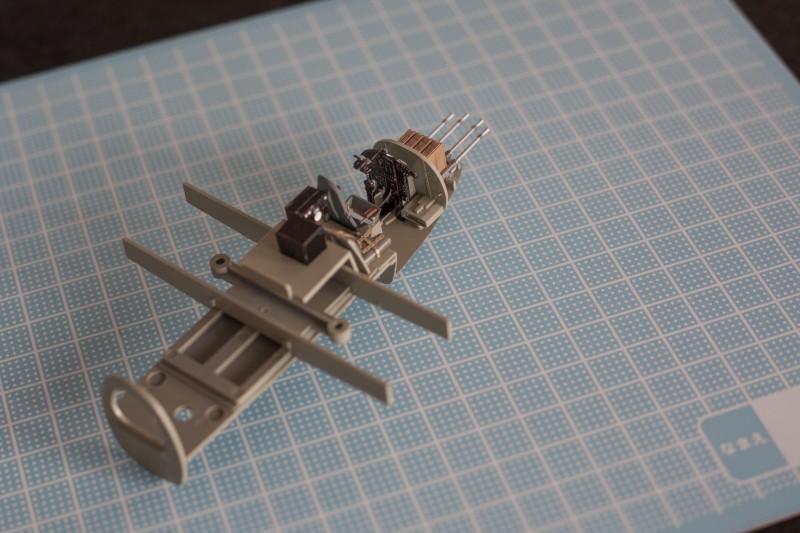 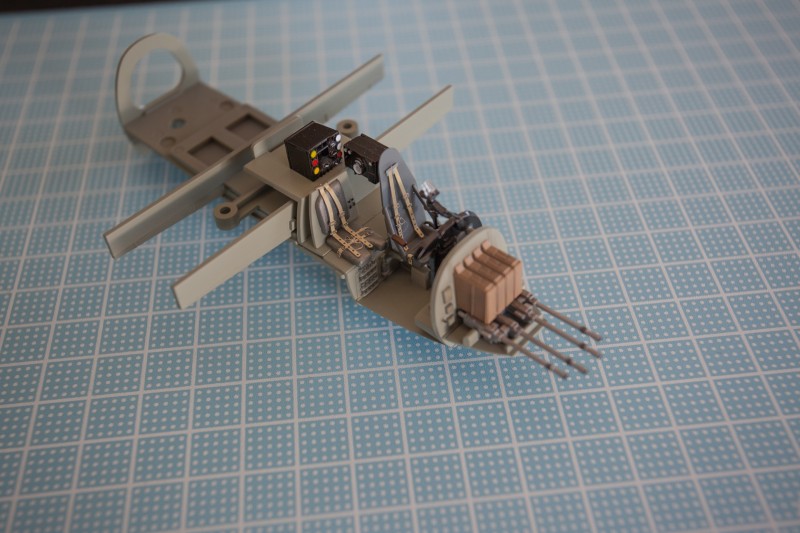 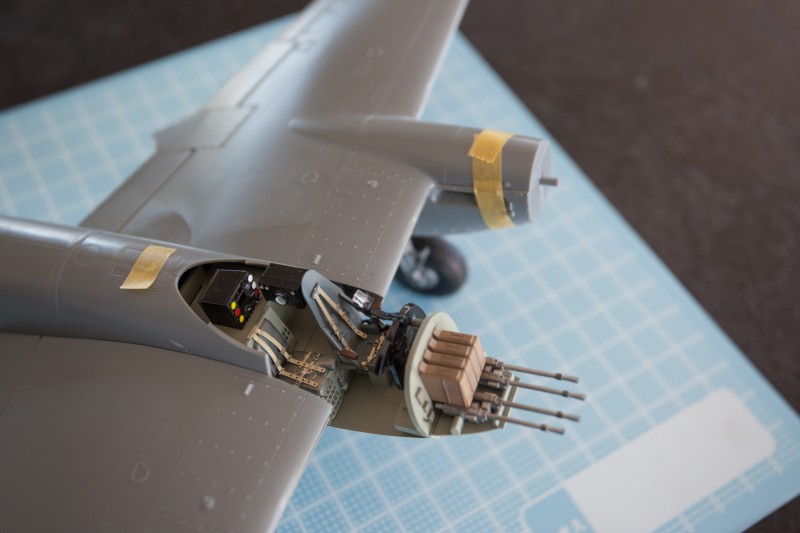 As most Mosquito aircraft were stationed on grass airfields, the kitset includes a set of treaded tyres as per expected.  The undercarriage consists of a few pieces yet is nice and easy to assemble, and with a black wash put across it once assembled looks superb. 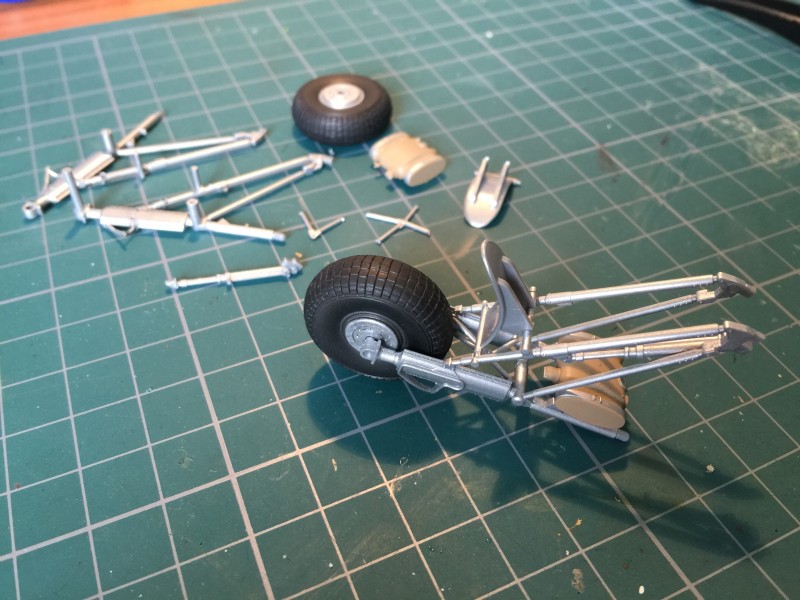 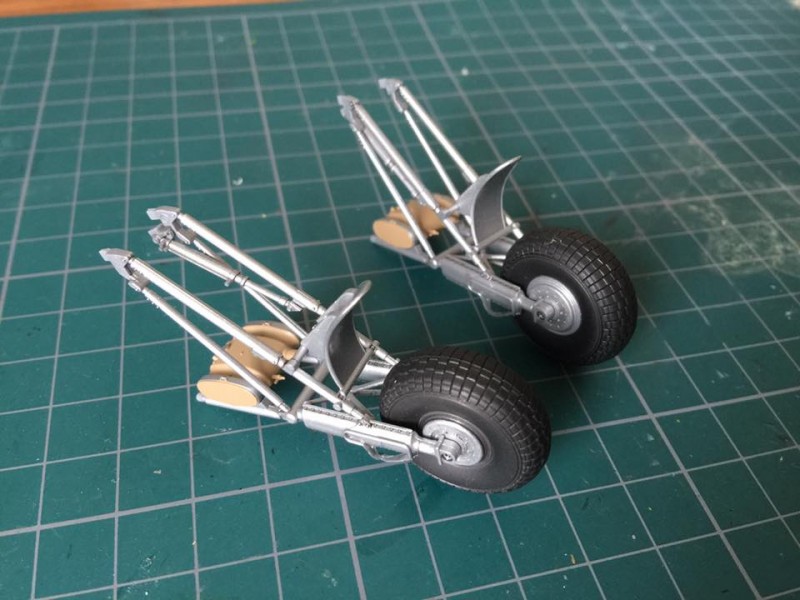 The one thing I never have to worry about when building a Tamiya kitset is how well the two halves of a fuselage will sandwich together. The answer is ‘perfectly, everytime’ and this time was no exception. The bulk of the aircraft is contained within 2 pieces, yet the cockpit section and nose gun area consists of an additional four pieces. Not to worry, they all line up very nicely. 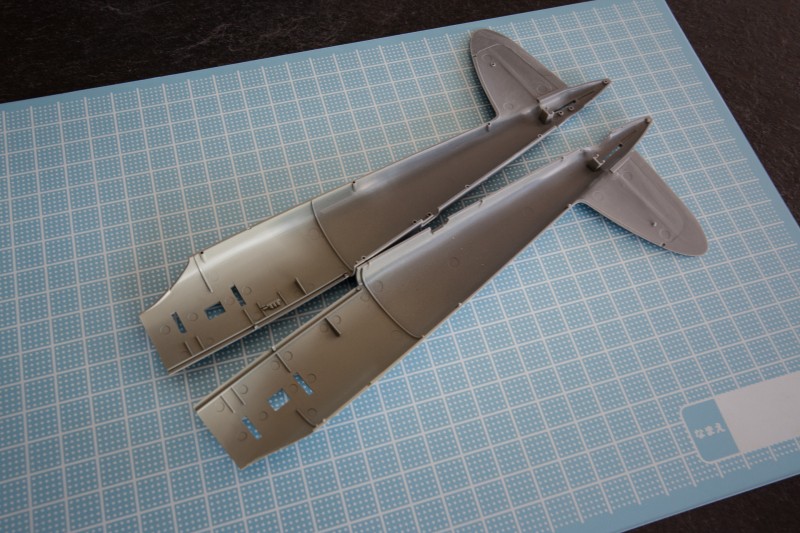 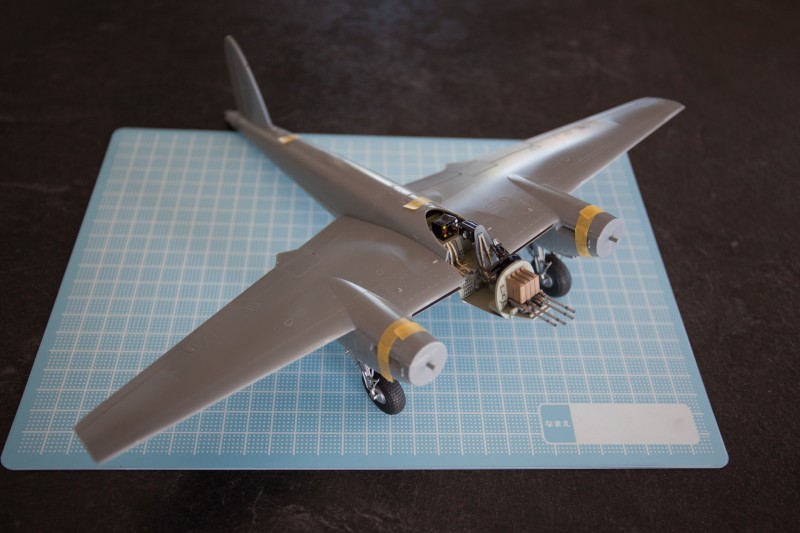 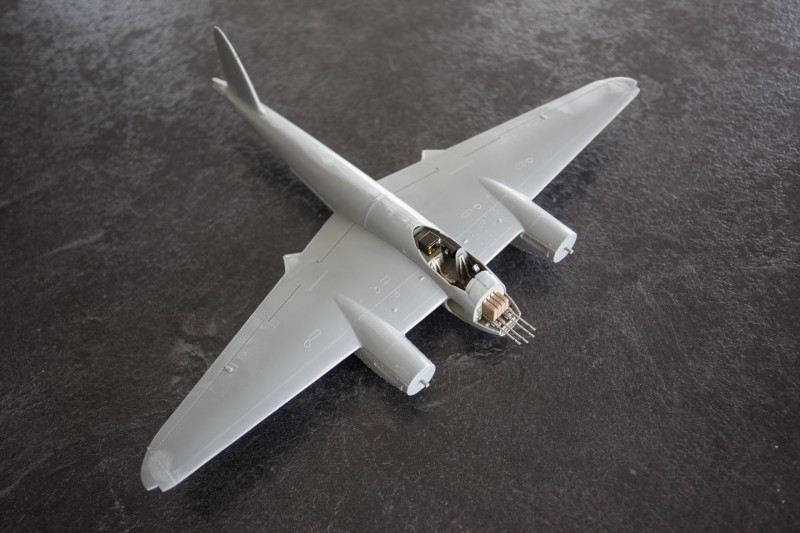 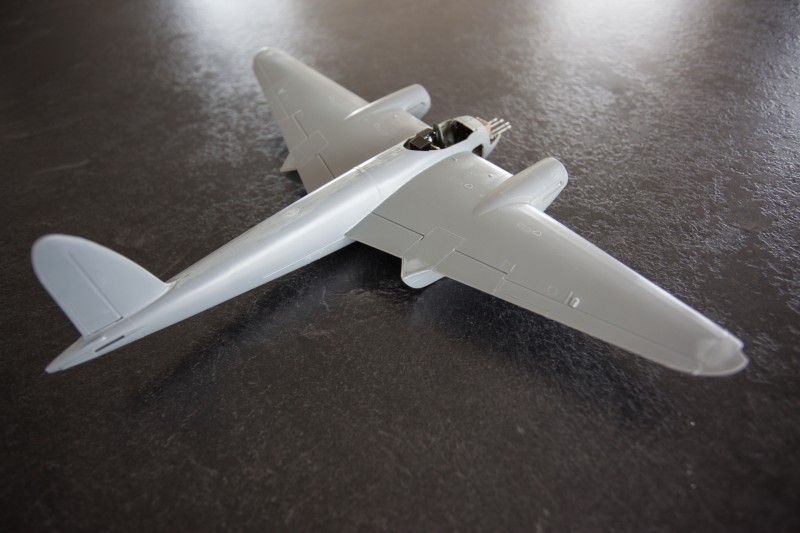 I usually like to stick to the instruction procedure for assembling a kitset, yet with the planes I deviate and do things a little backwards because I prefer to paint the aircraft assembled. I assembled the cockpit, and then glued the fuselage and wings on, sanded back glue lines, and ensured a nice sealed, snug fit on all panels. I then sealed off the cockpit and sprayed the light grey on the underbelly. After masking this off I added the darker grey on top for the base of the camouflage livery. Finally the top coat of RAF green was to be applied. I use TS spray cans for my models and to achieve a realistic effect I cut out the template included in the kit to lay on top of the model when spraying.

To achieve a marking line that isn’t solid, I roll out thin sausages of Blu-Tack adhesive and attach these to the bottom of the masking sheets I cut out. The key is to recess them in from the edge by 2-3mm and have them about 2mm raised up so the spray paint gives you a defined (yet soft) marking on top of your aircraft. Once all the masks are attached, it isn’t pretty but trust me, it does the job nicely. 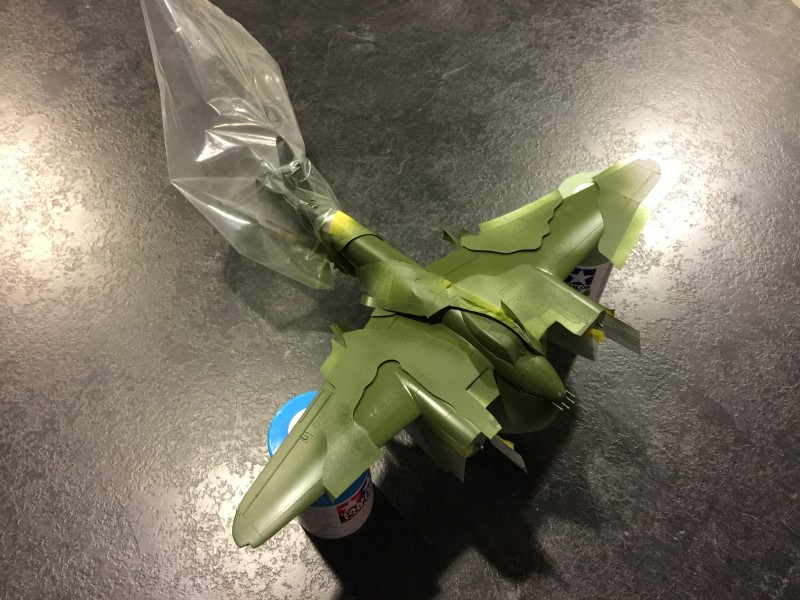 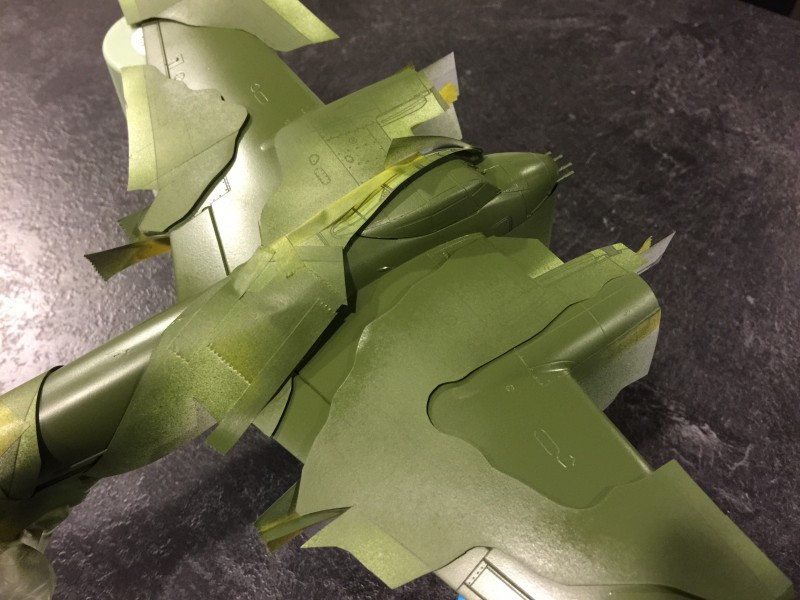 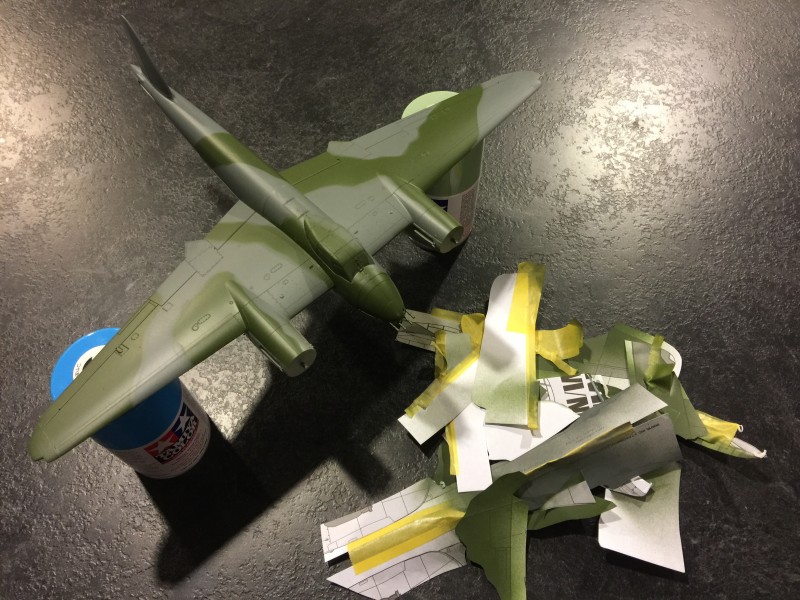 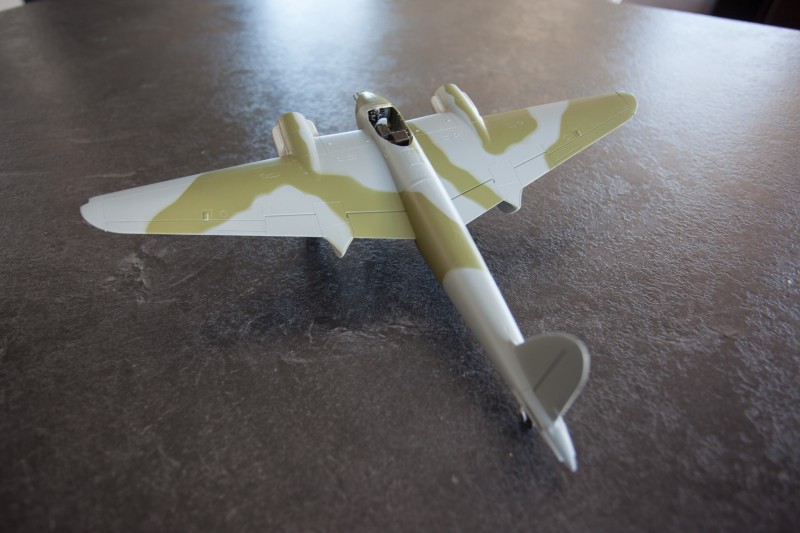 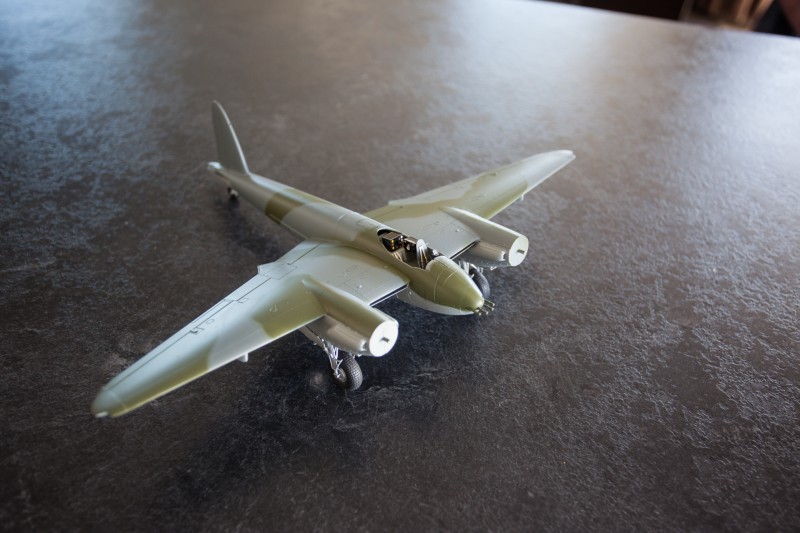 The decals for the kit are superb, offering good color depth and thickness, ensuring none of the paint markings show through from underneath. A little decal solution goes a long way to ensure they conform nicely not leaving any silvering, or raised edges as the wings aren’t perfectly smooth. 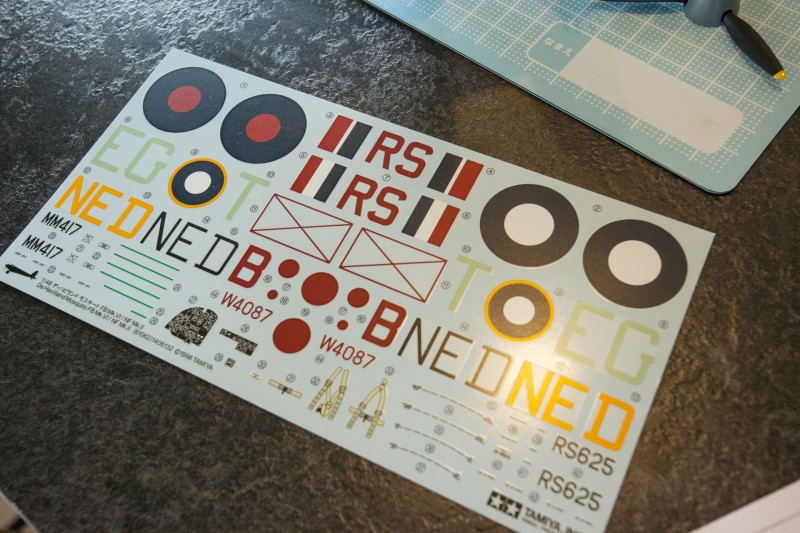 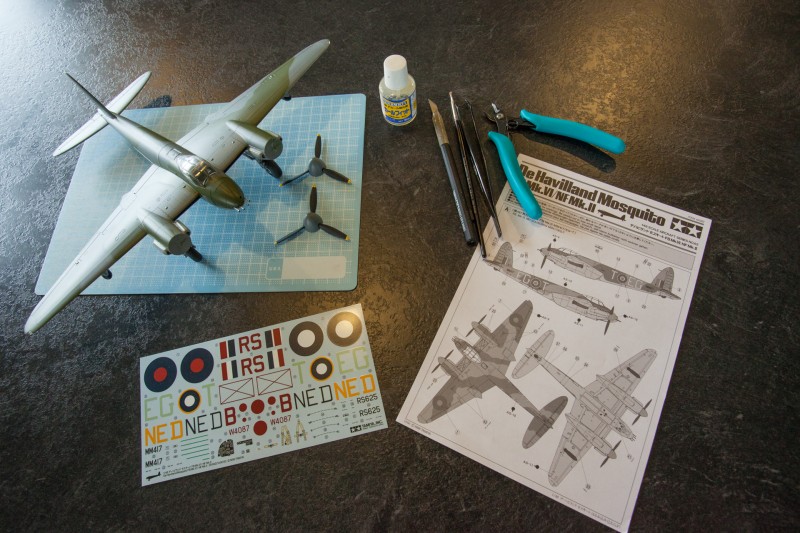 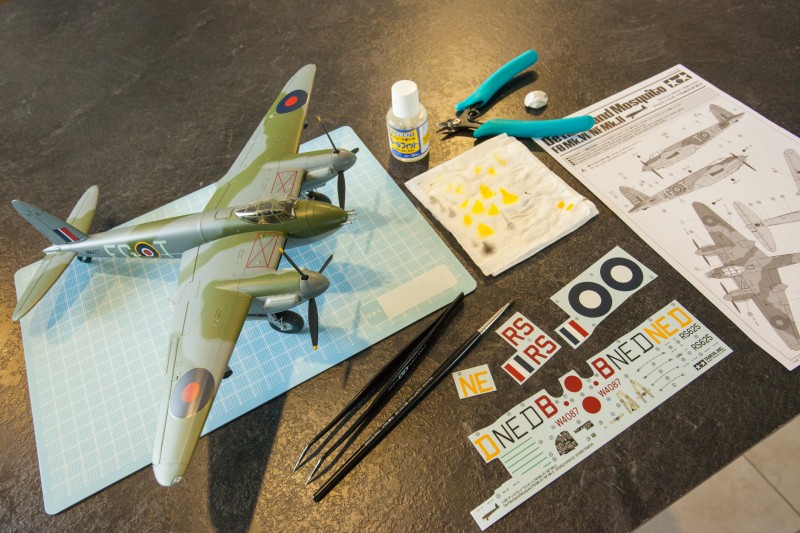 The end result is quite a spectacular model. Proportions are perfect, and the beautiful lines of the Mosquito really pop once the roundels and markings are applied. With superb fitment, this kitset really does make for a perfect addition to the display case: big enough to stand out but not too big to hog all the space along side your other kits. I highly recommend getting your hands on this one. 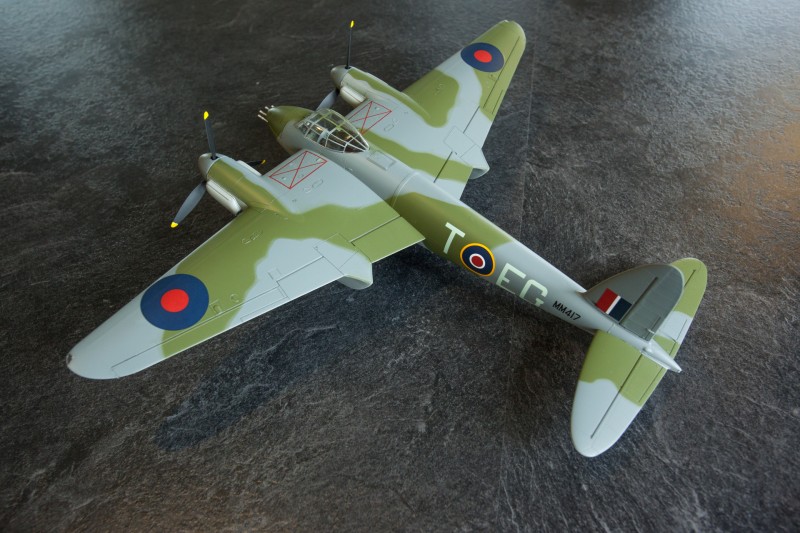 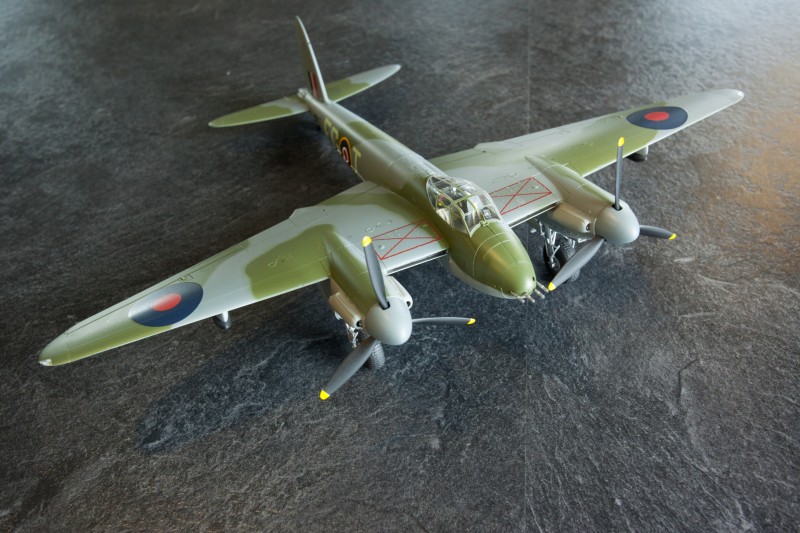 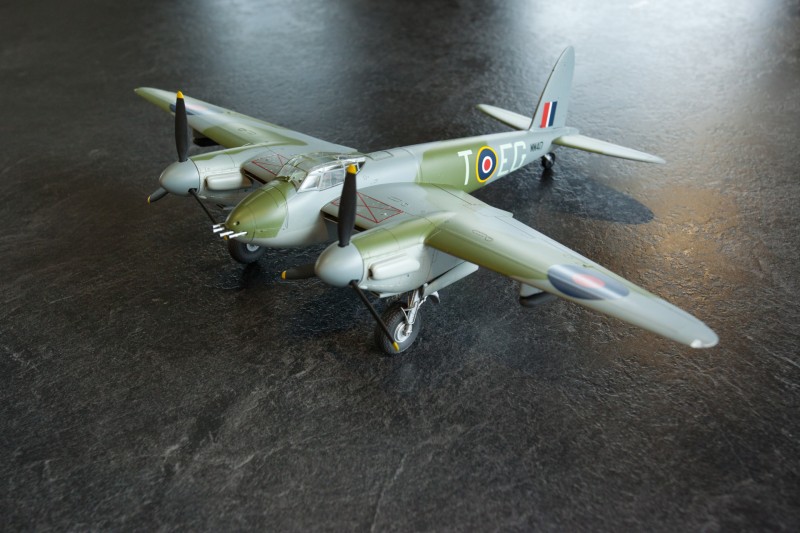 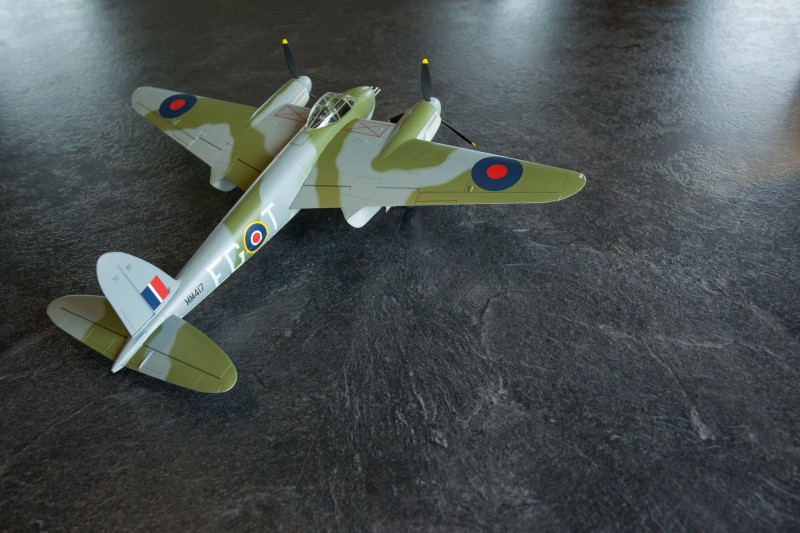