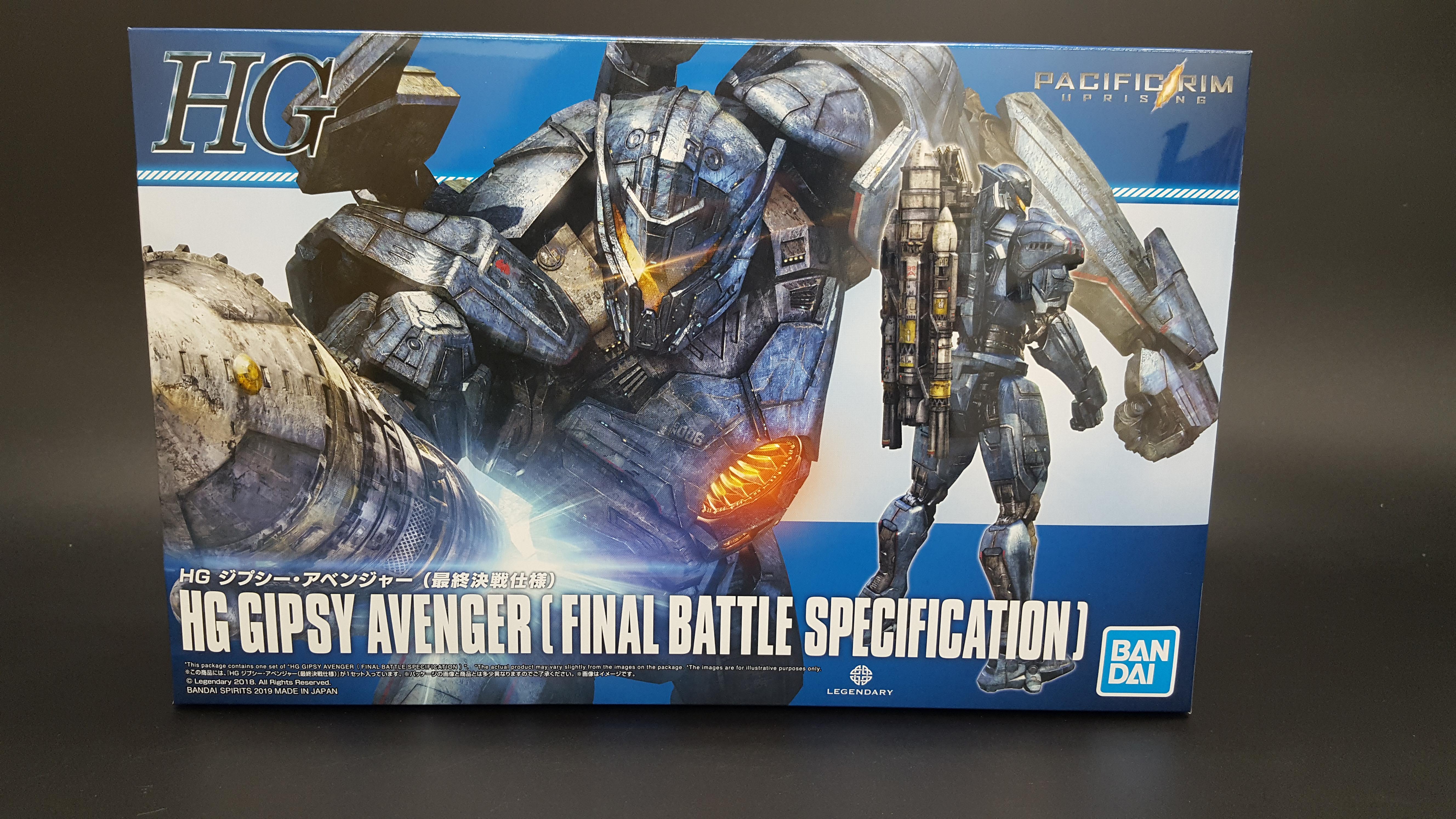 Let’s kick this one off with a personal anecdote. You can get to know me a little, and think back fondly on your own Pacific Rim viewing experiences.

I saw the first Pacific Rim movie in the theater, on a pretty big screen, and it completely blew me away. For some reason, I felt myself gravitating away from the general opinion of how cool the Jaegers were (was I the only one that could only think “jaeger bombs” the whole time?) — and more towards this great awe over the enormity of the kaiju. Watching the movie I felt less nostalgic about Gundam and super robots, and more about… Final Fantasy VII (the Weapons!) and Evangelion (the Angels!).

It was just like nothing I’d ever seen on the big screen and watching it made me feel so small.

So when Uprising came out, I was there opening weekend. It’d gotten mixed reviews, but hey, all I wanted to see were giant robots, kaiju, and robots fighting kaiju and as long as Uprising had that, I couldn’t ask for more.

And it was an entirely different experience from what anyone expected, wasn’t it? We went from a completely badass cast, (mostly) serious and intense plot, and some of the most amazingly detailed and realistic live-action giant robots, to… Pacific Rim sort of making fun of itself as a genre when the series kind of is all there is to the genre.

It was somehow so delightful to see all these cliche themes and tropes from the mecha anime genre rehashed in a Hollywood motion picture.

And I can’t be the only one who burst out laughing in the theater when the Jaeger ate asphalt right in front of the Gundam statue. Who could ask for more?

The point is, Pacific Rim is a franchise that has blown the minds of mecha and kaiju fans — and even people who didn’t know they could like this stuff — and has opened the doors to modern, high tech robot-vs-monster movies. At least I’d like to hope so. And one can only wonder, if a third movie ever happens, what genre they could move to next.

For now, we’ve got model kits in spades, and I’m pretty happy with that.

The first Pacific Rim didn’t exactly bring a lot of merchandise with it. We didn’t even really start seeing kits until Uprising was announced, so we have several Gipsy Avenger kits in Bandai’s HG lineup, but the Danger… only got one. (And it wasn’t Bandai’s doing.)

But having the final specification version of the Avenger sort of makes up for it in my opinion. If you can’t have the great titans of the first Pacific Rim movie, at least you can have the Avenger with a freaking rocket fused to its back.

We’re off to pummel a kaiju! 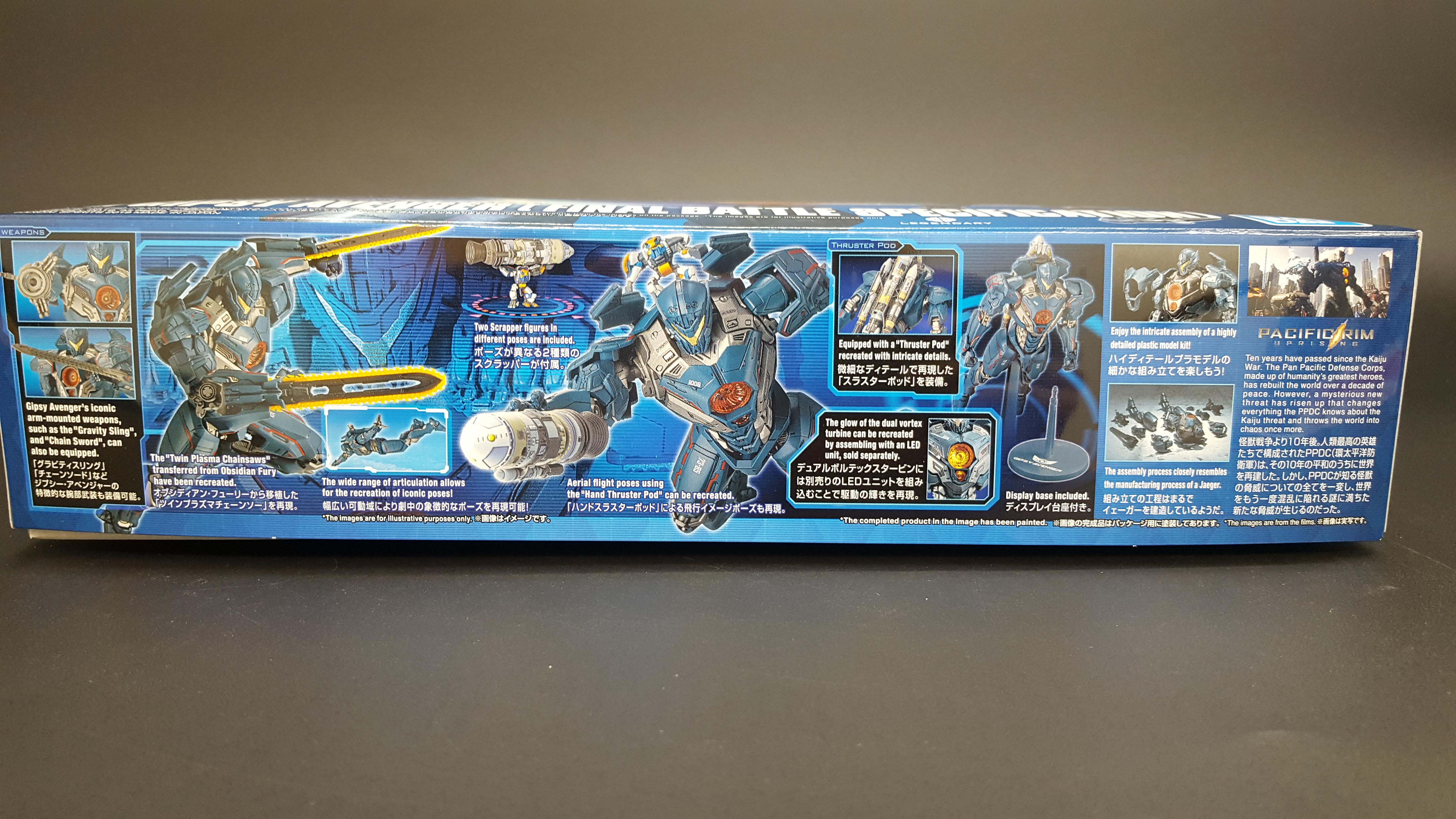 There is a whole lot of text happening here. Here it is, in case your screen isn’t terribly cooperative in showing you that small print!

There is so much to unpack there. I’m sold on the Scrapper figures, myself — and how the heck can we know that the assembly of the kit mimics the manufacturing process of a Jaeger? That’s sort of a funny detail!

On the right side of the box we get a brief synopsis of Pacific Rim: Uprising, but if you’ve read this far you probably already know what we’re talking about so let’s keep going. 🙂 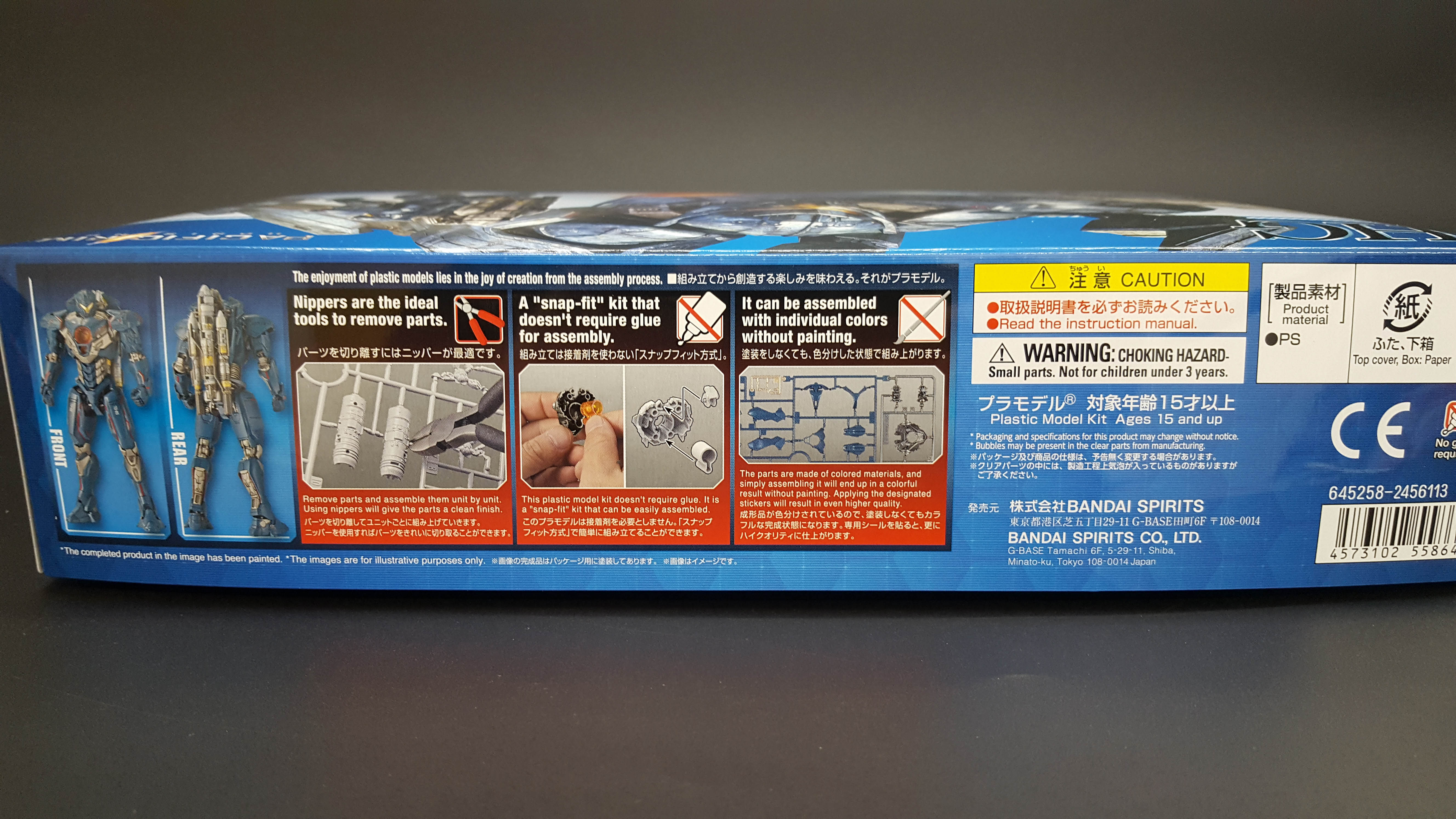 This side of the box pretty much just shows off model building basics. I get the impression that Bandai wanted to make this kit welcoming to fans of the movies who may not have touched a model kit before. Intimidation can keep folks away. As you’d expect, Gipsy Avenger is snapfit and is molded in a whole bunch of glorious color, so just about anyone could assemble this guy with ease. 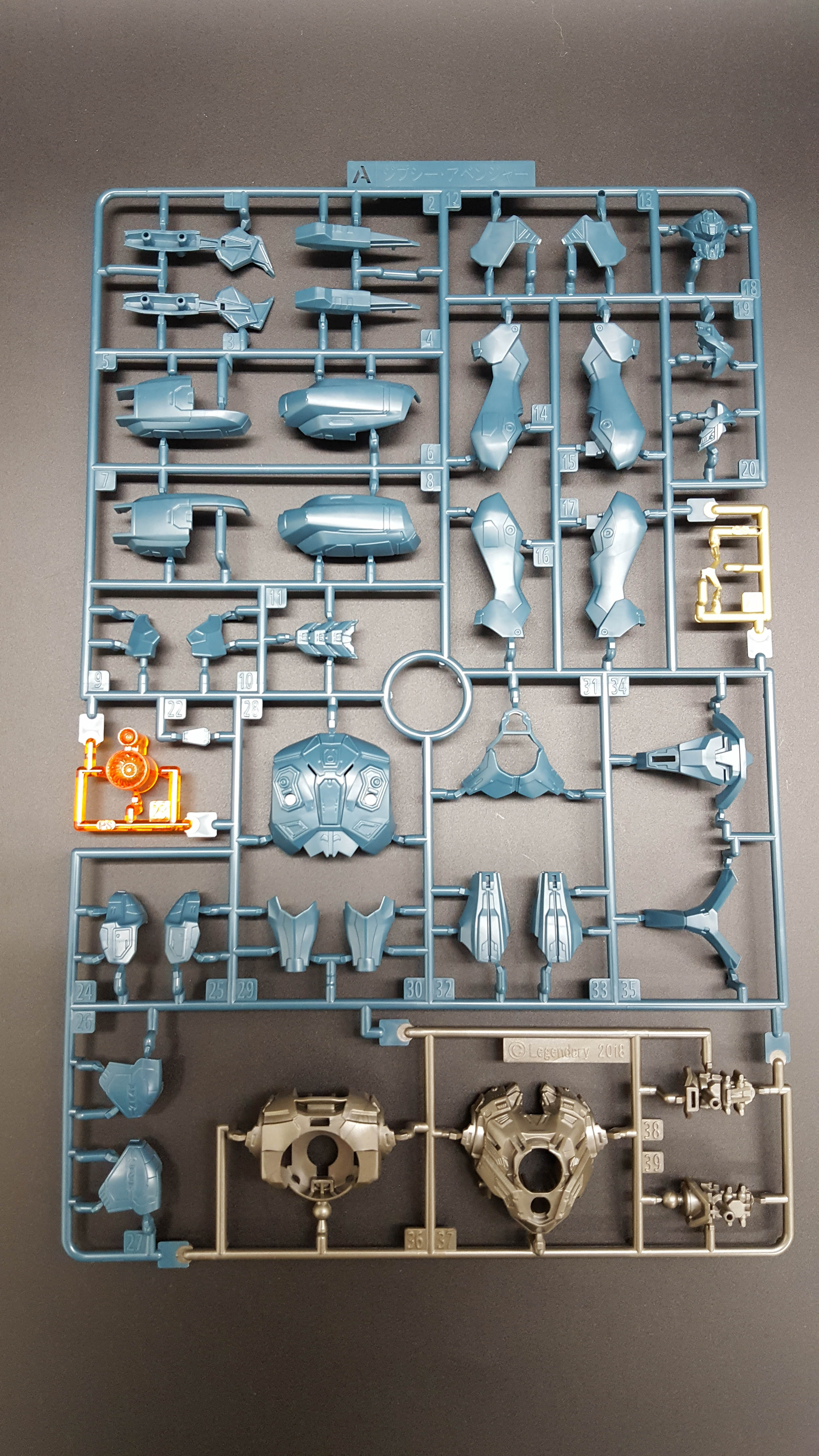 Going big right out of the gate with runner A! We’ve got 4 different colors here and one of them is translucent! For the most part, this somewhat glossy runner consists of the Gipsy Avenger’s blue body parts, with some gold inner details. The dual vortex is right here, too, begging for an LED. 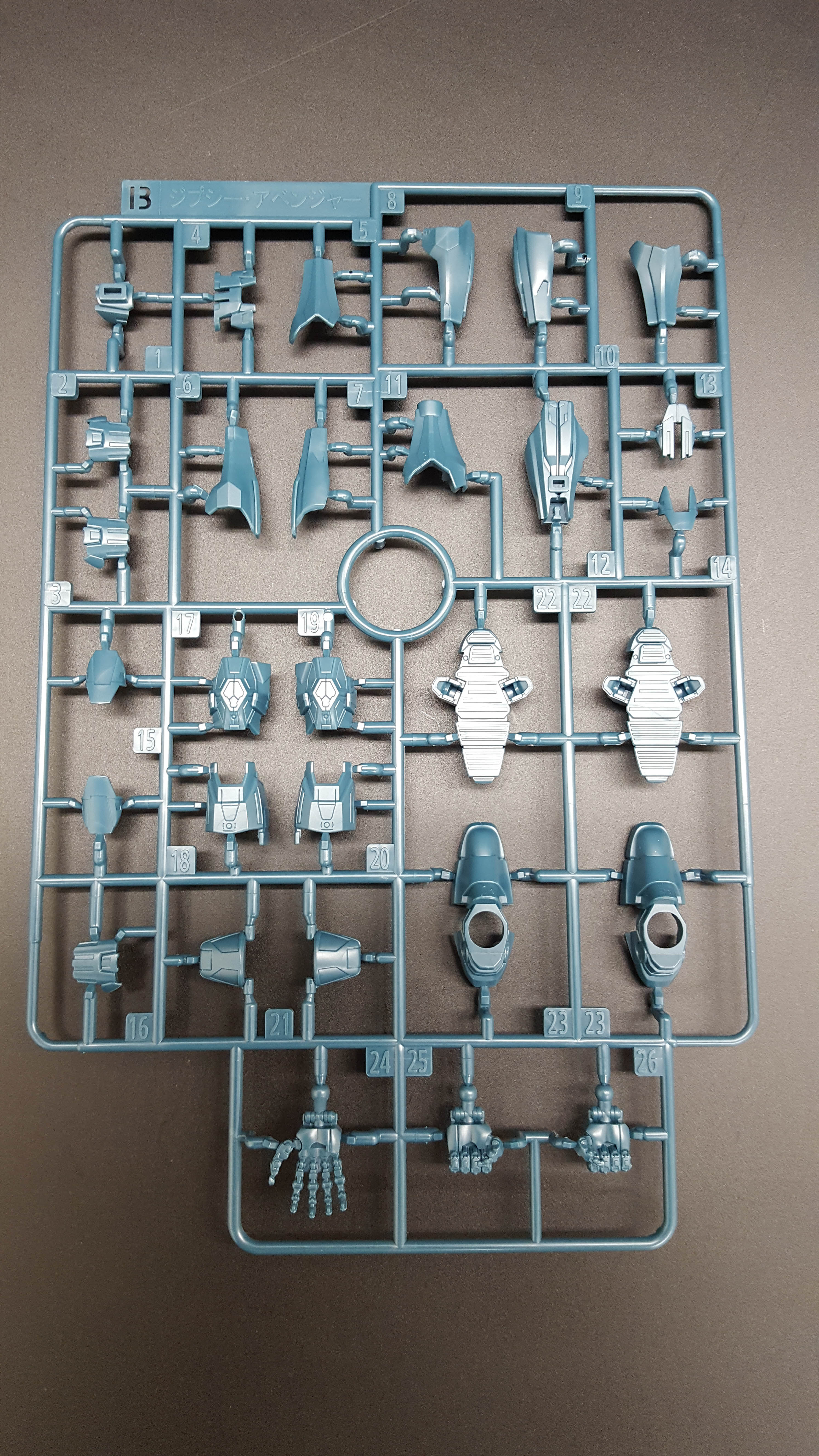 More body parts on the B runner! We’re looking at hands and legs here. The hands are meant to be fists, but you do get one optional hand (not a pair) for the hand thruster pod pose mentioned before. 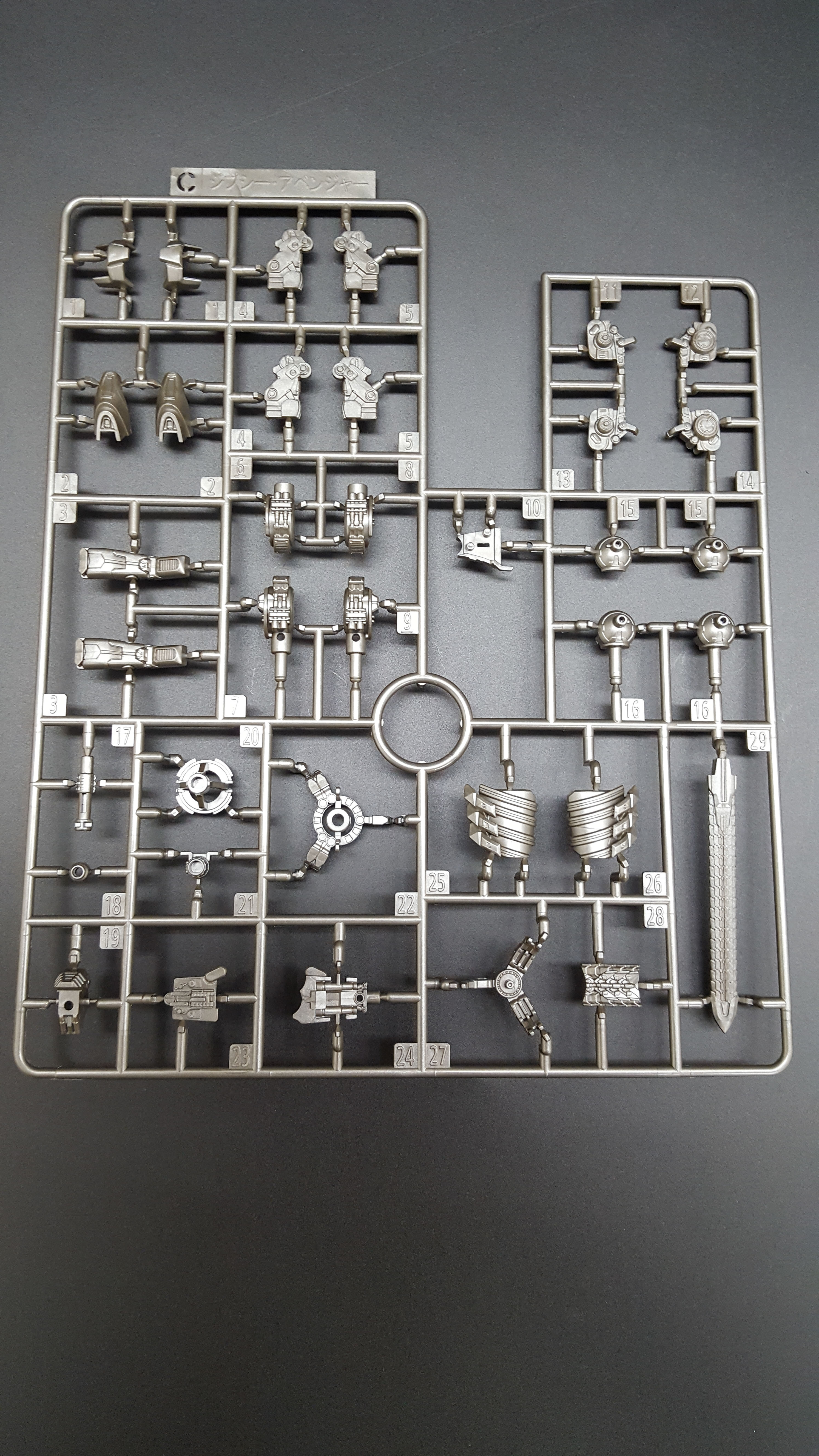 The C runner gives us lovely metallic parts. These are mostly weapon and detail parts. 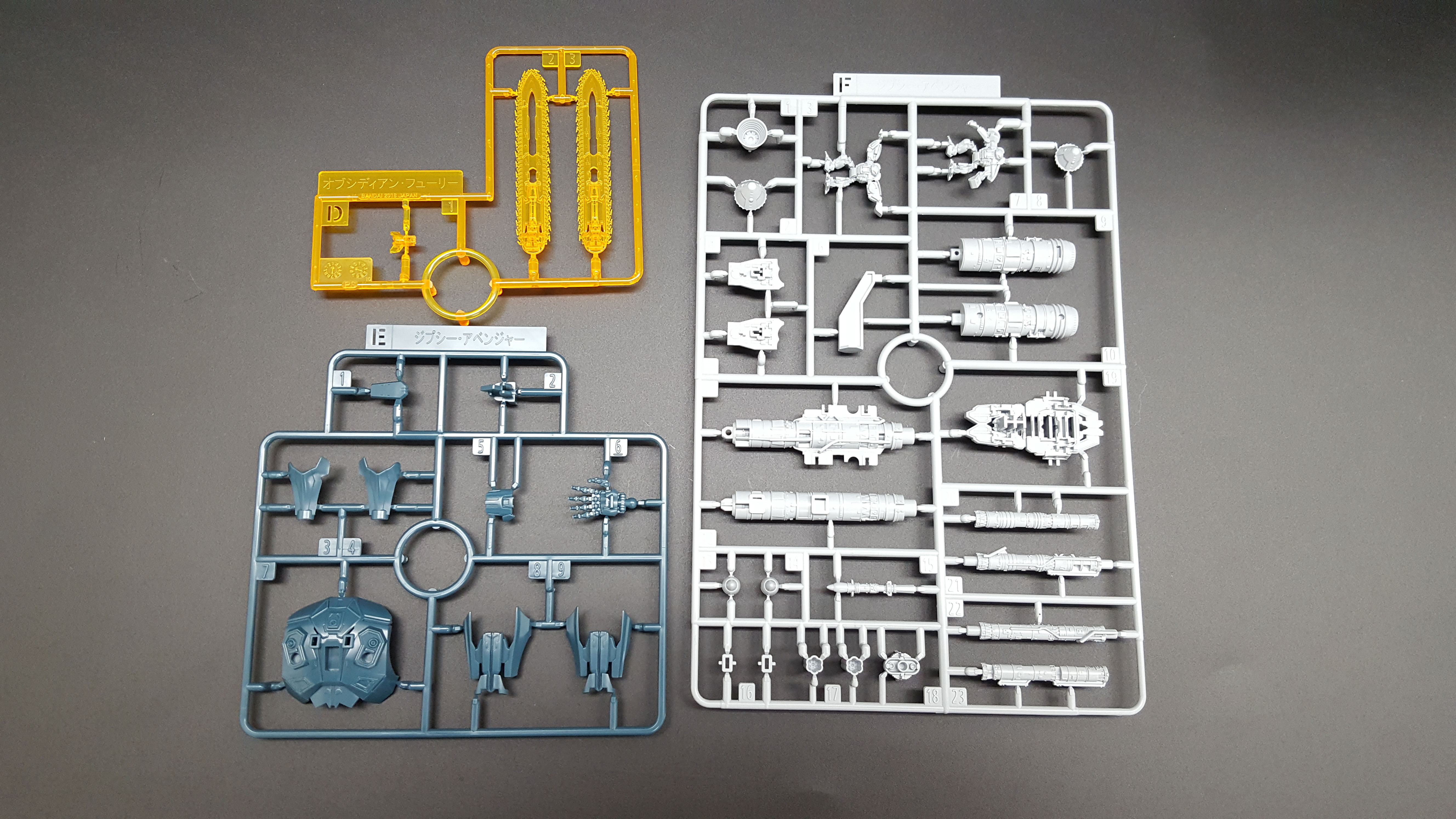 Here are the smaller runners. We have a whole runner for additional semi-transparent orange parts for the plasma chainsaws, and — wait, there’s another hand part here! Well, that’s good!

The F runner consists of parts for the “thruster pod” — I’m going to maintain that it’s a rocket. Welded to a mech.

Scrapper is in there, too. Both figures are molded as a single part but you’ll have to cut them off the runner. And they could probably use some paint. 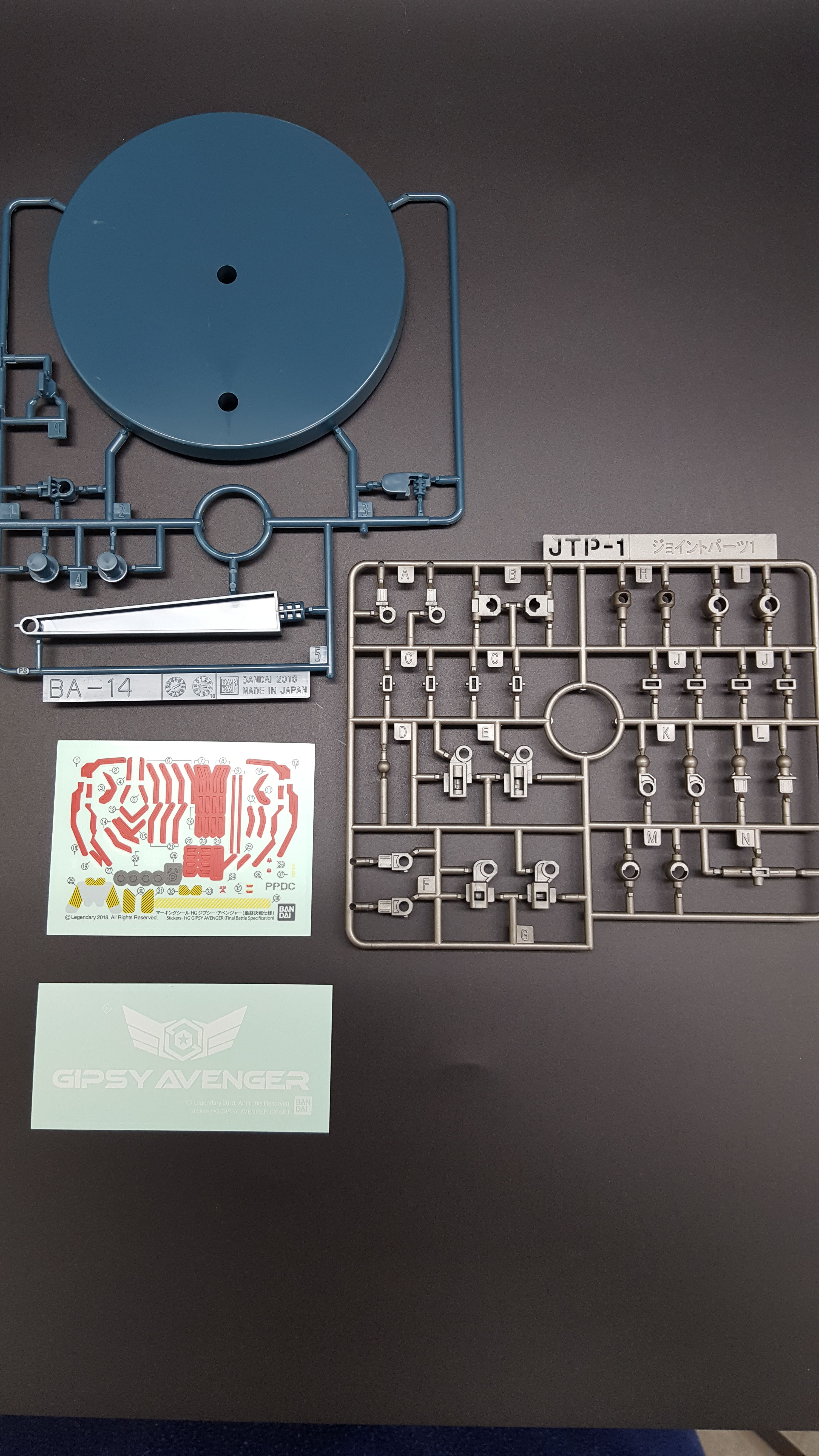 And here we have the miscellany. The JTP-1 runner has all your joints, and the BA-14 runner holds the parts you’ll need to assemble the stand. I’m digging the stickers, too. I know, I know: decals are better. But the stickers here are almost entirely for small details. It doesn’t seem like it’d be too hard to get them to stay in place.

And hey, there is a decal!  That Gipsy Avenger nameplate-looking decal is actually for the base to make it nicer display piece.

The HG Gipsy Avenger is in stock as of this writing for just 2,550, which isn’t too bad for all the cool stuff you get. It’s disappointing there’s no LED including, but also nice that that keeps the price point down for folks who don’t need their kit to light up.

I’d love it if you could share your builds of this kit if you’re working on it, as well as your thoughts about the movies! And please, someone, let me know if the build process actually feels like you’re manufacturing a real Jaeger. 🙂