Kaiju Smackdown:
Round One! Godzilla vs. Mecha Godzilla
Round Two! King Ghidorah vs. EVERYONE!

Both available from HobbyLink Japan: Godzilla vs. Mecha Godzilla and King Ghidorah. 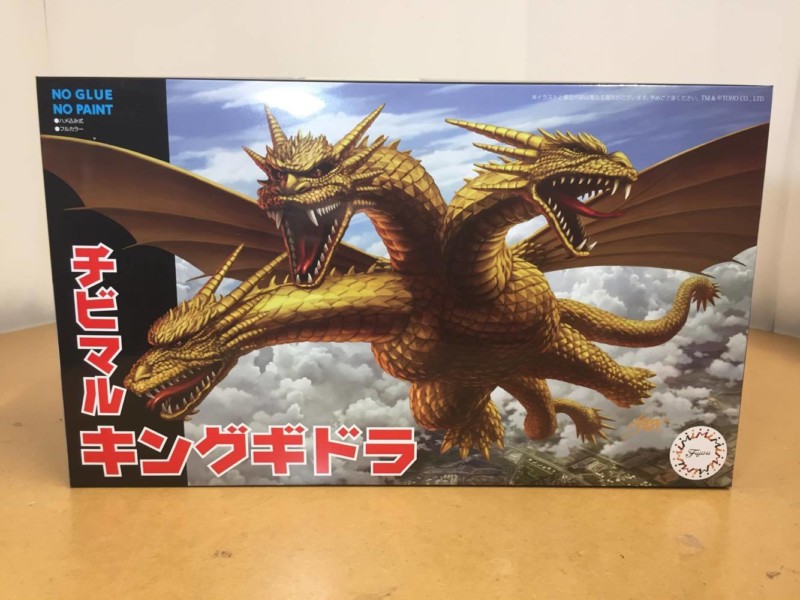 Writing this, in October 2017, it is only a few months since Nakajima Haruo, the beating heart of the 200 pounds of rubber and metal which was Godzilla (and for nigh on to a dozen films at that) passed away at the age of 88.

Making these little models, it reminded me of the time I lived close to the old master and was able to chat with him from time to time.

Unlike so many of his Kaiju peers, he embraced his alter ego even though, as he said himself, it put him in fear for his life – often dehydrating him to the point of collapse, and being set on fire by the SFX explosions going on around him.

Mind you, he had been a daring actor since the time he found himself at the offices of Toho Studios in the late 40s, though at the first he was just one more eager face in the press of people struggling to break into the industry – a thing which has not changed. Not knowing what else to do with his life though, Master Haruo told me that he found the best way to stand out to directors and casting staff as an extra was being willing to do what everyone balked at doing when called on: Being blown up, knocked down, set on fire and dropping great heights.

It was cheaper if extras could do their own stunts.

And do them he did, most spectacularly in the 1952 film Eagles of the Pacific, in which Master Haruo was called on to sit in a blazing aircraft set. It was a feat he managed with such aplomb that he became something of a lucky charm for directors seeking a golden touch for key action scenes, including even Kurosawa Akira, who hired on Master Haruo to tackle some of the more taxing bandit fights/deaths in The Seven Samurai.

However, though acting roles would keep rolling in after his show stopping burning plane scene in ‘Eagles’, in 1953, Ishirō Honda who had directed that film decided that Master Haruo was the only man able to endure the privations likely to be visited on the actor who was cast in the ‘lead role’ in a shadowy project, known only as ‘Code name G’.

Obviously, this would be the 1954, Godzilla.

However, in the run up to the production the Toho offices were on total lockdown, and even the director who had hand picked Haruo for the titular Godzilla kept everything close, until the production crew were ready to begin work, building enormous model cities and even more gargantuan monster suits, such as the one worn by Haruo himself. It all started off so oddly, as Haruo admitted to me. He was sent over to see Tsurubayu Eiji, who was the special effects master on this film. He apparently looked the young Master Haruo over, asked how much he could lift and praised him for his daring work so far. He then, apparently said something to the effect of ‘we have an excellent character for you, but we cannot not tell how it would all work out until we get you into the suit and see how much you can move’.

Tsuburaya then apparently took out a copy of the 1933 version of King Kong for Master Haruo to watch, whilst he dug around in the ‘Code Name G’ story boards for images of the monster being used. All very daunting stuff, but as Haruo seemed so keen, Tsuburaya was content to let him get on with things, and just cautioned him that as the suit weight was high and visibility minimal, just focus on what Tsuburaya said. 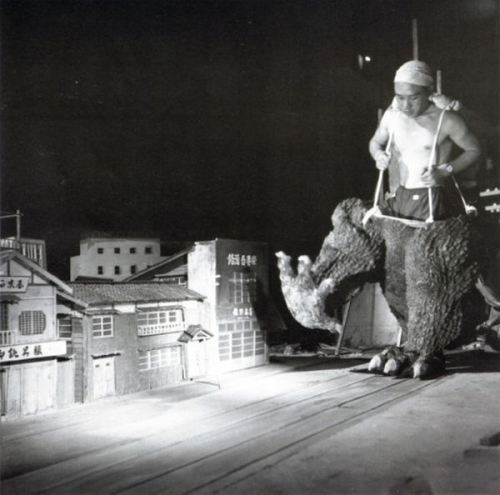 Giants in the Playground

Arriving on set for his first day of filming Master Haruo thought it would be all fun and games, even with his hard rubber suit. Though he told me it did indeed weigh over 200 pounds, it was worn like armor, so the weight was relatively evenly distributed and the actor could last a good few takes (with sufficient air and water breaks).

Still, even as the thought of the fun of rampaging through a carefully constructed downtown Tokyo model was before him, Master Haruo seems to have gotten a case of the nerves.

The work of the model makers, which had taken months to put together in a believable fashion with plaster, small windows, boarding, and so on, so that when filmed it would look ‘right’ being knocked down, did not allow for many (really any) mistakes. Quite a burden for the actor, as one misstep could mean weeks of work for the crew, and massive budget strain.

Inside his ‘Truck Tire Tomb’ (for the suit was composed of something akin to car tire rubber), and on his platform soled shoes, Master Haruo gave it all he had though, even as moving became more and more awkward in the tight space, and dragging the enormous tail day after day. He found relief in studying the movements of animals and perfecting his own walking techniques, so as to give Godzilla power – apparently, he adopted the sort of gait a Kendo Master, or Sumo Wrestler might use, in sliding across a tatami mat, with feet always on the ground, for maximum stability, and minimum swaying. This latter part was crucial, as with the film being shot at high speed to give the final version a sense of scale, any duck-like waddling would make Godzilla seem more comical than cosmic.

Though… That did not last long as we all know. 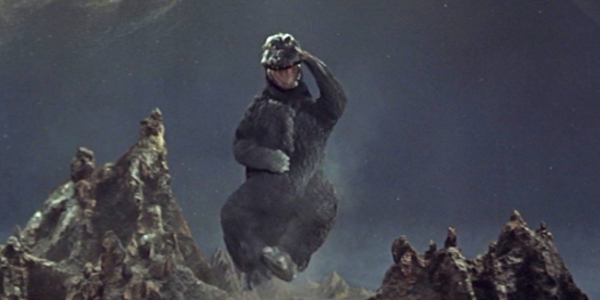 Still, back in 1954, Master Haruo only really made one serious blunder when wrecking Tokyo on that first film –  the destruction of a distinctive tower which the director felt was ‘too tentative’ and which necessitated a two week rebuild for a 5 minute reshoot.

Strange to tell though, Master Haruo knew little of the film other than his own role, so buying a ticket for a public screening he was just as amazed to see what had been actually made of his pain, and struggle. Sitting front and center in Tokyo, he was surprised, he told me, at how many people were in attendance, as this was just another monster movie.

However, as soon as Godzilla’s roar was heard and the now immortal theme started up, it was clear why so many people had flocked to the showing as even Master Haruo could not quite believe what he saw and that made it all worthwhile.

He even scoffed at those who turn their noses up at the later Showa Era and more child-friendly Godzilla films, which focussed on increasingly more monster action — including his favorite scene of Godzilla, Jet Jaguar, Megalon, and Gigan indulging in a little tag team…

At that point the old man began toying with a chibi Godzilla model, and our conversation turned to other things…

Ostensibly pre-painted and clip fit, there is a good deal packed into this battle box.

Let’s open it up! 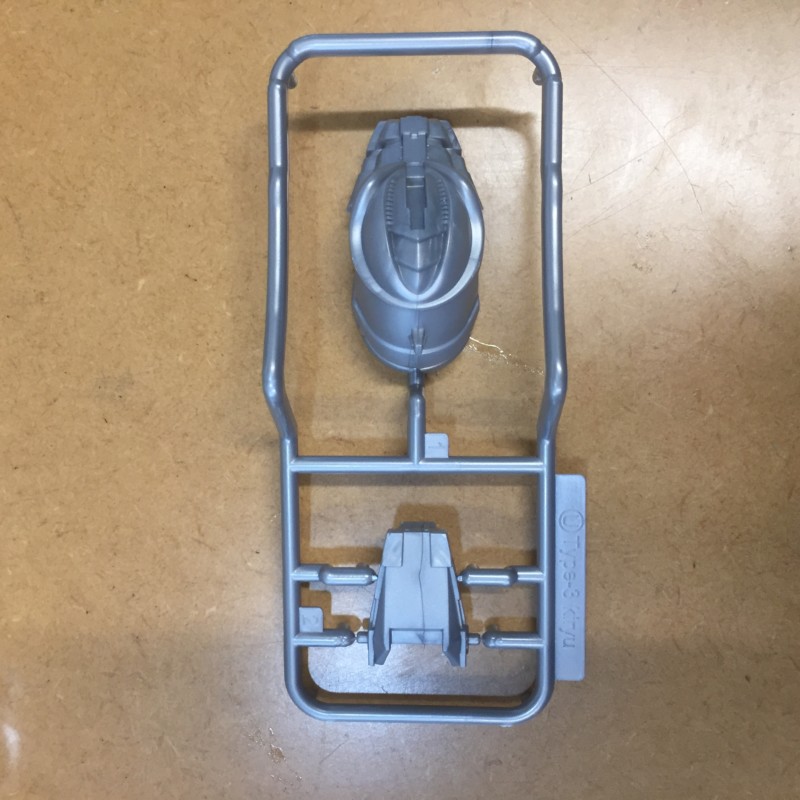 This has the sense of being mugged by a hamster in tinfoil, but let us not judge before we have built. 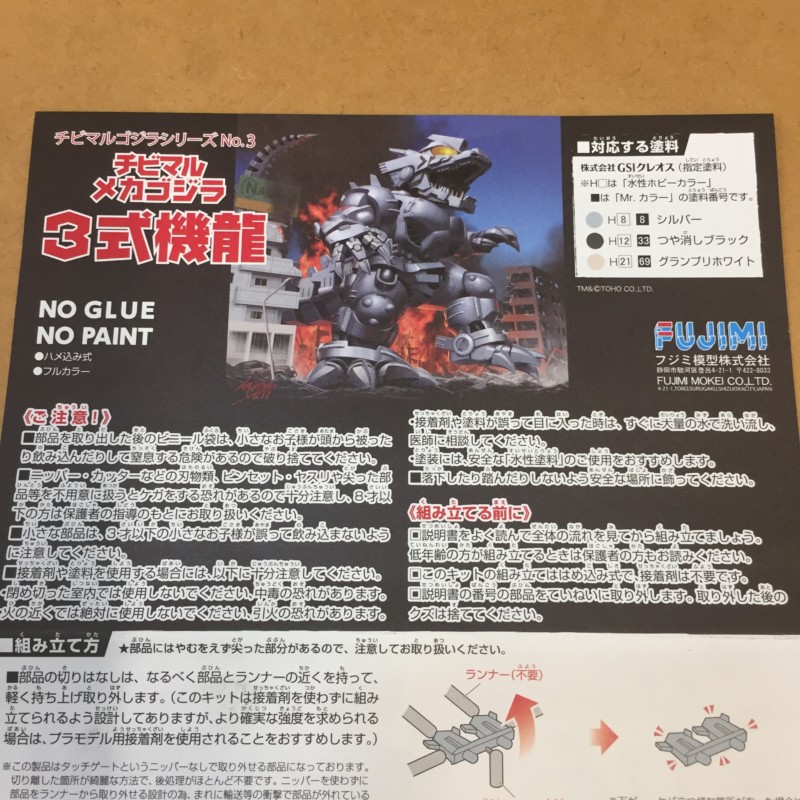 (However, do not let this distract you from the fact that in 1998, The Undertaker threw Mankind from a sixteen foot Hell In A Cell through an announcer’s table) 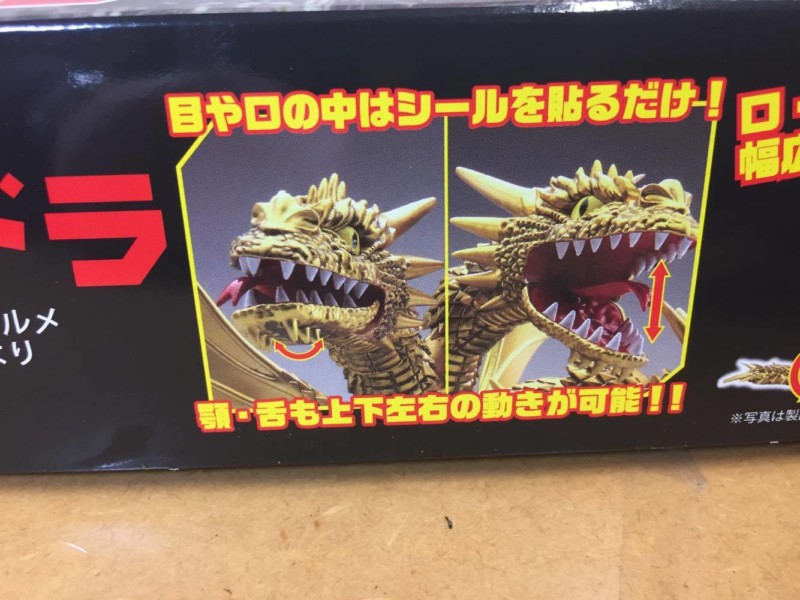 He might look dinky, but he’s a one monster Triple Threat! 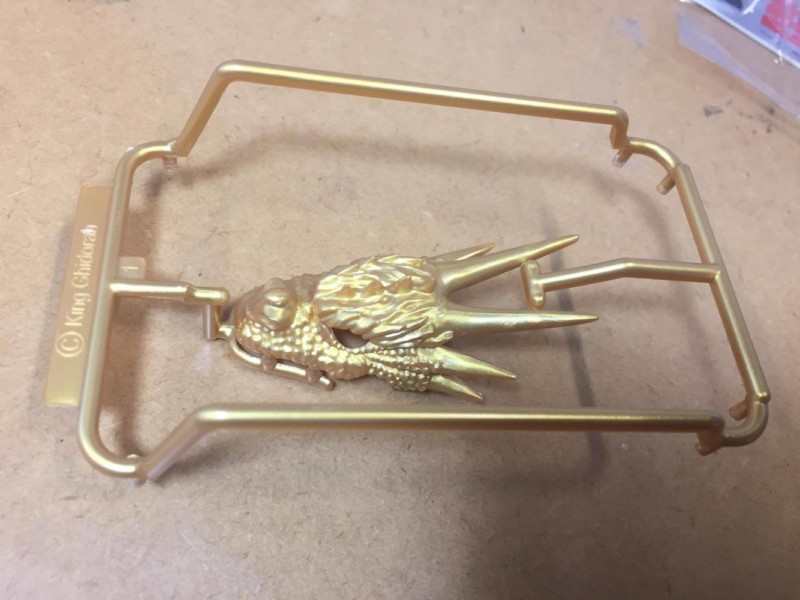 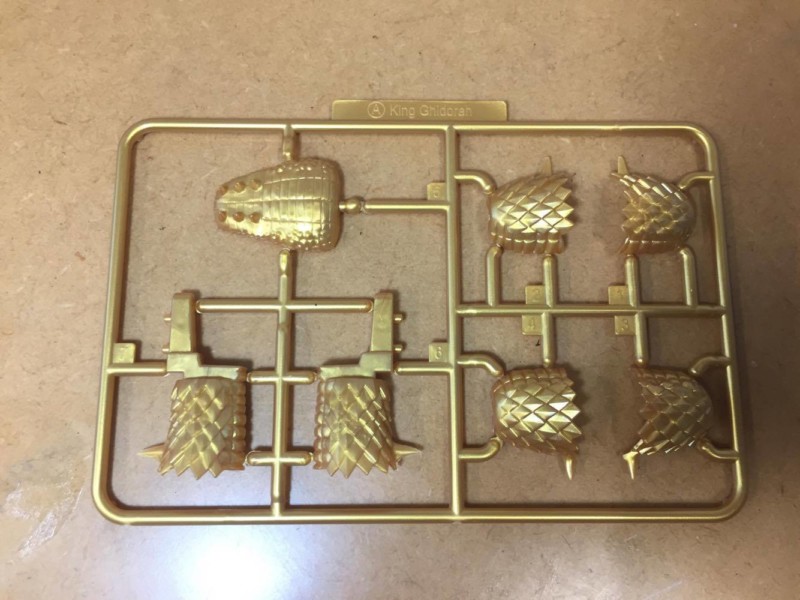 We shall talk more of King Ghidora and the other monsters in the build, but I’m more than a little charmed by these three buggers already.

Ought to be a fun afternoon…