Image is an interesting little — almost atavistic — garage kit company which has managed to survive almost unchanged from the 1980s, and specialises, as you will see from its website, in cutsie, SD versions of a variety of Tokusatsu monsters, with a heavy bias towards Toho’s own king of monsters.

Before I came across this kit though I had not even heard of them. Now… I cannot get enough.

This is an interesting turn of events indeed.

Nishikawa Shinji (also known as MASH) entered the monster mash in the 1980s, as the man who was given the intimidating reins of taking over as lead designer on the Godzilla series, and worked on every Godzilla film from Biolante to the Final Wars. However, the multi-talented artist (whose career encompasses anime, manga, illustration, game, and general good timery) is responsible for much more than just the beasts in the Big G movies.

For example, Toho has called on his talents many times in the last two decades to bring his flair to many of their other Tokusatsu offerings, such as the Rebirth of Mothra III, for which he designed all the main Kaiju.

Moreover, he has also been drawn into other special effects work for people like Tsuburaya Studios, and has been put to work on the Ultra series, reinvigorating it with his own more brutalist eye – which has been compared to the work of the late, lamented Nirasawa Yasushi at times. I am not in favor of this comparison myself. Certainly both designers came up about the same time, and were involved in several projects together (such as Final Wars), and the designers did share common approaches to the ideas of broken symmetry in their works (either visually or internally).

However, Nishikawa’s works were more restrained than Nirasawa’s, whose lopsided demons were like, as he described to me at a model show in Tokyo in 1993 (where I bought the original resin Nina Dolono kit), that he was very fond of fiddler crabs, as he felt that the asymmetry of their bodies spoke more to niche evolution and visual appeal. Where the two designers were closer was in the concept of combining animal, human, and plant elements, which is clearest in Nishikawa’s Biollante design – a plant/animal Kaiju with a human core which, in early concepts was to have fully evolved into an actual flower in an attempt to reproduce. However, this was changed at the behest of the studio to something that could best be described as Crocodilian compost heap.

Indeed, Nishikawa has spoken a number of times on the subject, and it comes down to this: He seems to have originally conceived Biollante’s final form with a multipart mouth and numerous petal jaws/stamens, that was to give the impression of a pure flower. This seems to have been to facilitate her ultimate attack, and, as mentioned above also serve as her attempt to reproduce on a mass scale, which would, naturally spell doom for the Earth. However, though his design and concept for the final fight was approved by the writers and Koichi Kawakita (who has directed the FX for several Godzilla movies), the studio simply did not get behind it.

There has been some talk of how this was because there was a desire to have Biollante’s genetic material work into the Crystal Godzilla design (AKA Space Godzilla, a genetic fusion of Biollante, Mothra, and Godzilla himself), but I think it was simply that the more unconventional design went a bit too far for producers who thought Kaiju purists would not like it if there were not a standard monster melee at the climax of an already very strange film. So we ended up with the more mundane final form for the Killer Krynoid (which is still pretty outre, to be honest).

Perhaps MASH was more free in his Biollante design, as he was working ‘tabula rasa’, so to speak, and if you examine his concepts for Mothra and Ghidorah, they are clearly designed to stay within what one might call the ‘limitations’ of the original concept.

This is important as all the main Kaiju have very dedicated fans.

Even when Nishikawa was handed the impossible task of creating a Mecha Ghidorah, he managed the job without straying too far from practicality (the FX work on Ghidorah had always a pain from the time of the Showa films), from his own ideals and from the expectations of the studio.

Note the infamous ‘Mech claws’. One of MASH’s key changes to Ghidorah which makes the Mech version more than a simple armor plating of the old three headed giant.

The Legend of the Legend

However, it might be interesting to see how this all started. Back in the early 1980s, NIshikawa was a wide-eyed tokusatsu fan working away, like many creative types, on potential doujinshi to be sold at local comic marts and (hopefully) attract the attention of the majors. In Nishikawa’s case, this actually happened when one of his titles, ‘Godzilla Legend’ (featuring a horde of tiny Godzillas overrunning Japan at one point), caught enough attention to get the illustrator taken seriously enough for Toho to bring him aboard as an outside contractor.

Godzilla Legend (and its sequel, Making of Godzilla Legend – itself a social comment on the commercial Cult of Godzilla – both MASH’s own work and the mass of merch which accompanied every film) won MASH a place in pre-production for a dinosaur film which needed some cutsey little creatures for it. Though that project fell by the wayside, Nishikawa took this time with Toho to make sure the right people saw some of his real work, and eventually secured for himself his spot on Biollante.

The rest, as they say is legend.

Is it a Fridge Magnet, a Figure, or a phone charm?

Well, this one is going to live on my fridge… Now MASH has returned to his roots with Image’s line of Chibi Kaiju.

So much can go wrong when you try to make cute versions of beasts like Godzilla (after all, look how long it took Bandai to perfect their own Super Deformed Gundam line), thanks to his work on his old doujinshi – no matter how amateurish he thinks they look now, MASH has turned the Big G into a Little G with great aplomb.

As you can see from the whole lineup, these are nostalgic works, and follow the classic rules for comic caricature, without straying – IMHO – into the realm of the absurd.

Now I know I have something of a beef about reviewing simple kits… Four parts. Four freaking parts!

Anyway, here we go. I’m forgoing the unboxing on this one as there really does not seem any point… 😉

I say it again… Four parts?

Not much drilling and pinning required here. However, it is force of habit by now with resin kits. 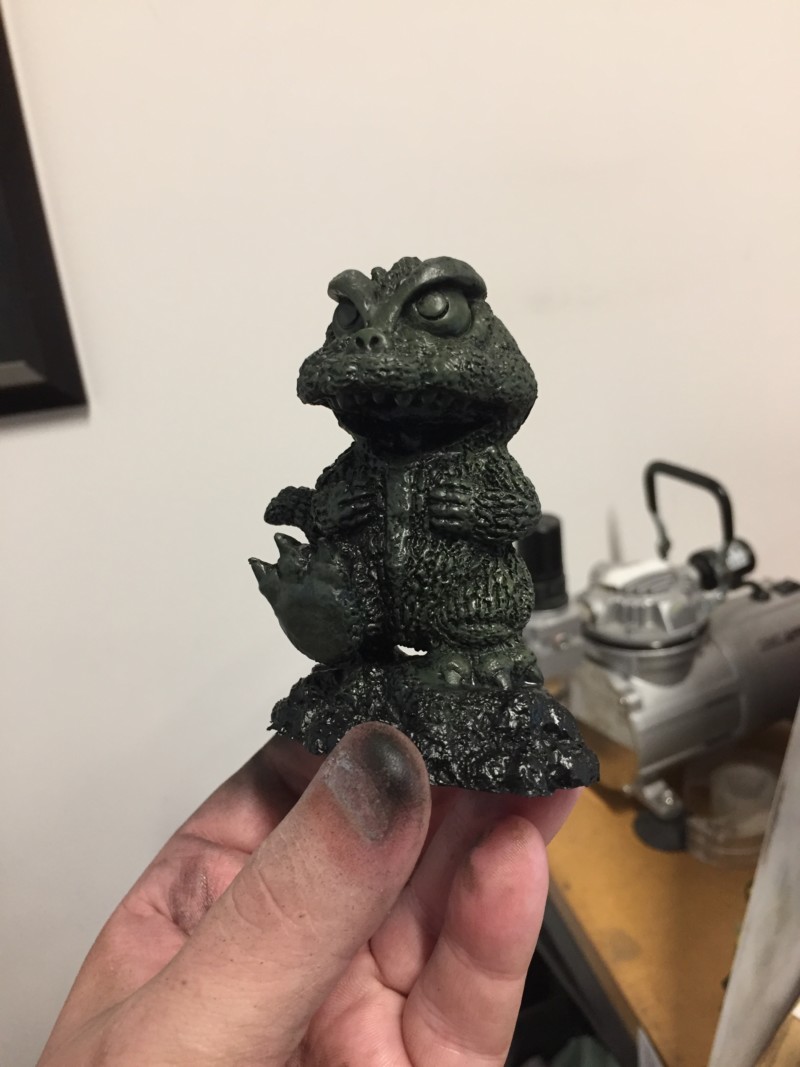 Time for some surgery. As you can see, the base sticks out at the back, at an odd angle. However, a quick few swipes with a razor saw and the fridge has its icecream guardian. 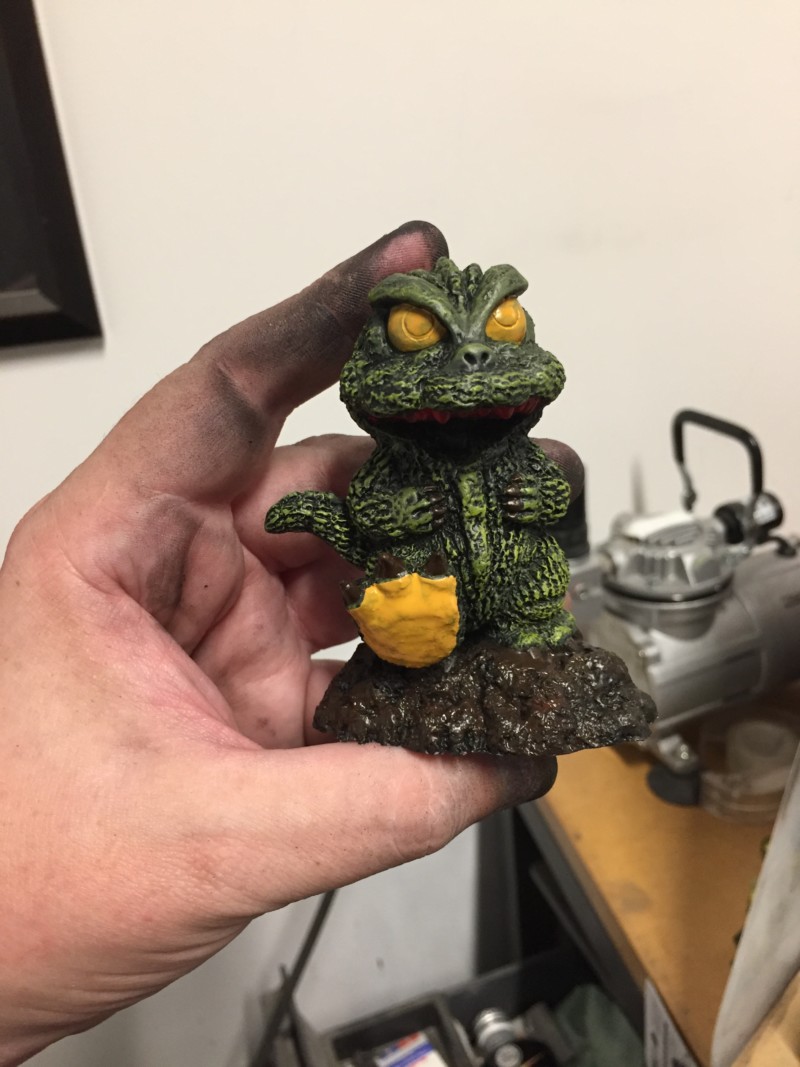 As always, I’m going for my speed painting approach here. Black undercoat, followed by a succession of greens, ending in a lime highlight. Nice, simple and easy enough for a beginner. 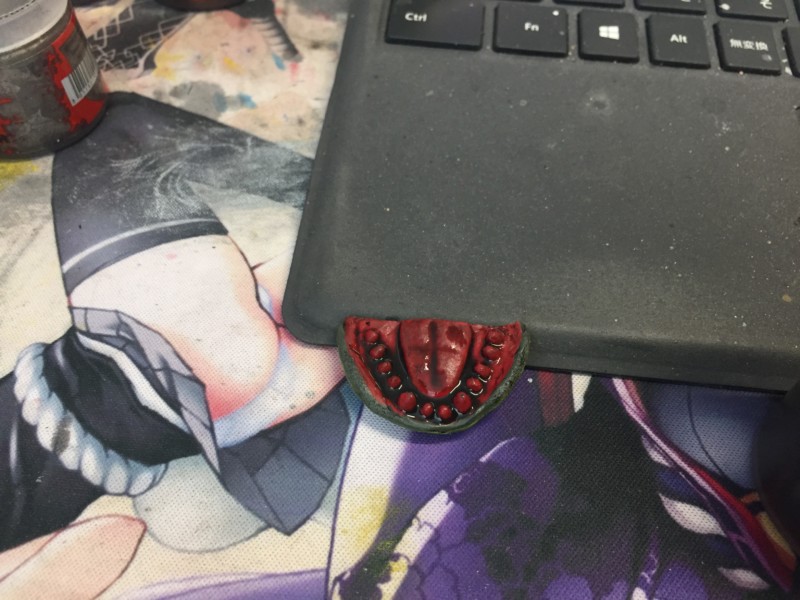 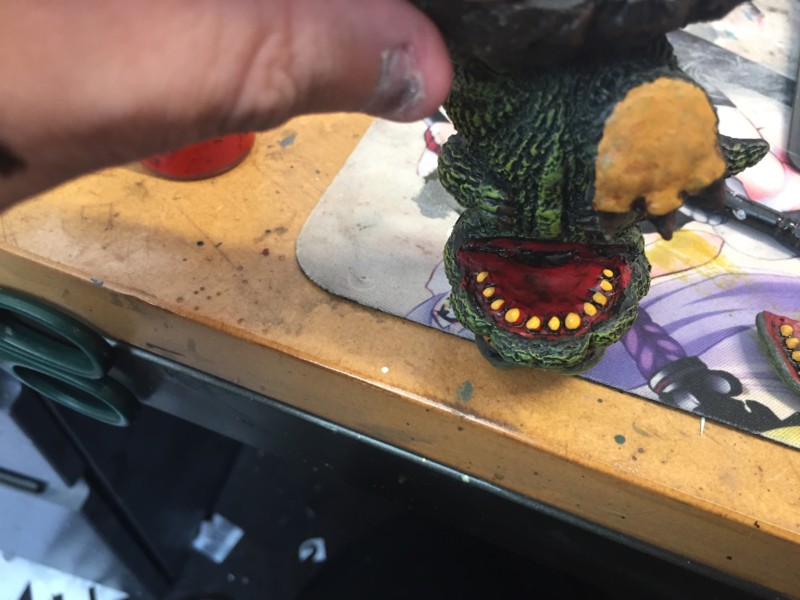 Even his Gob is cute. 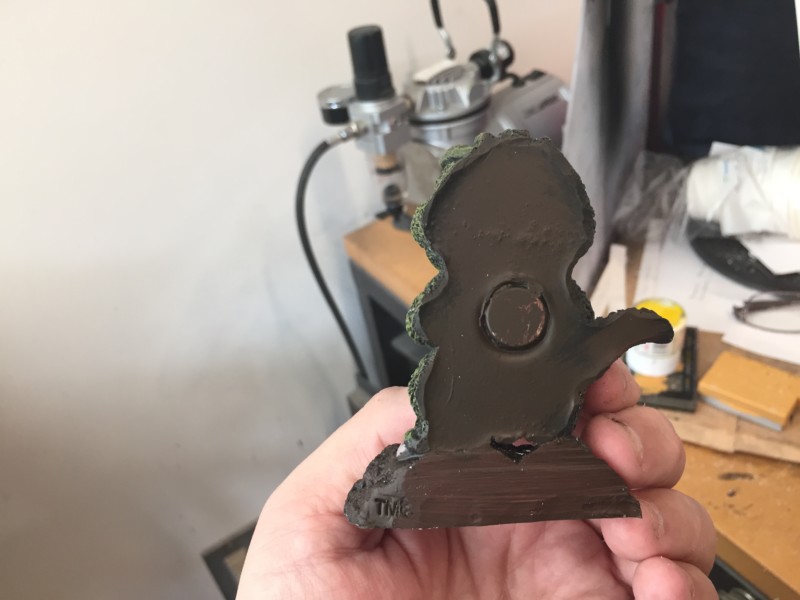 As said above, a quick saw later and the figure is fit for the fridge… 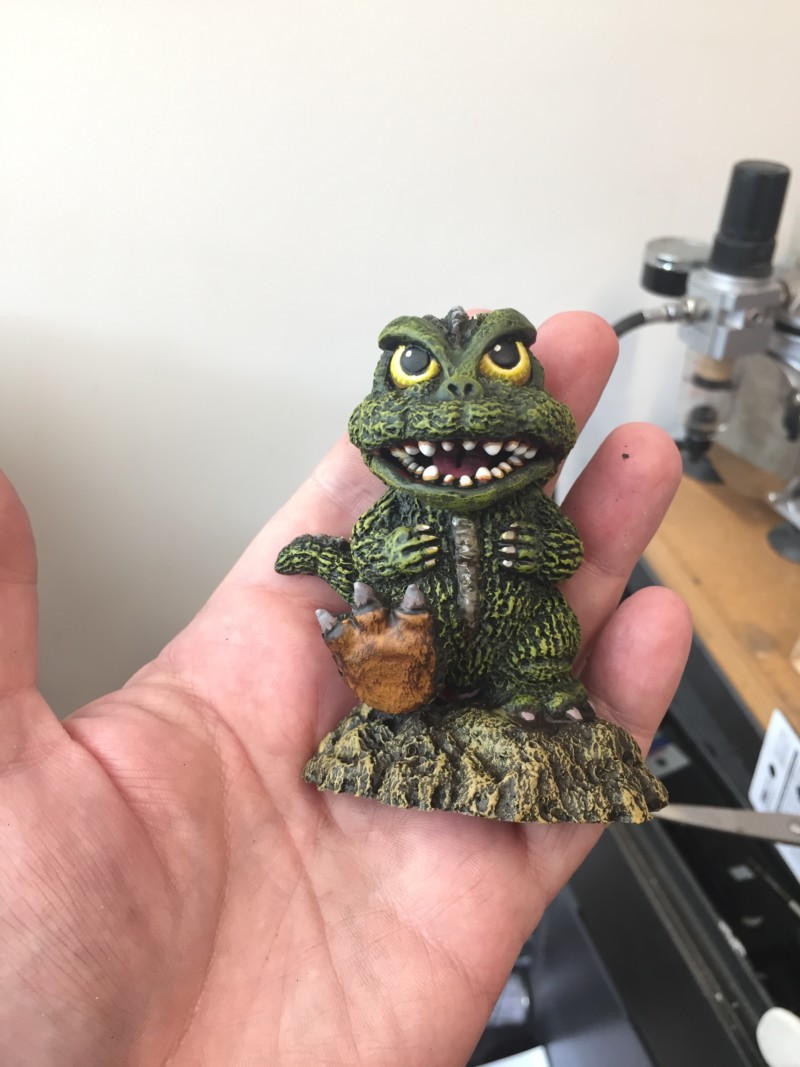 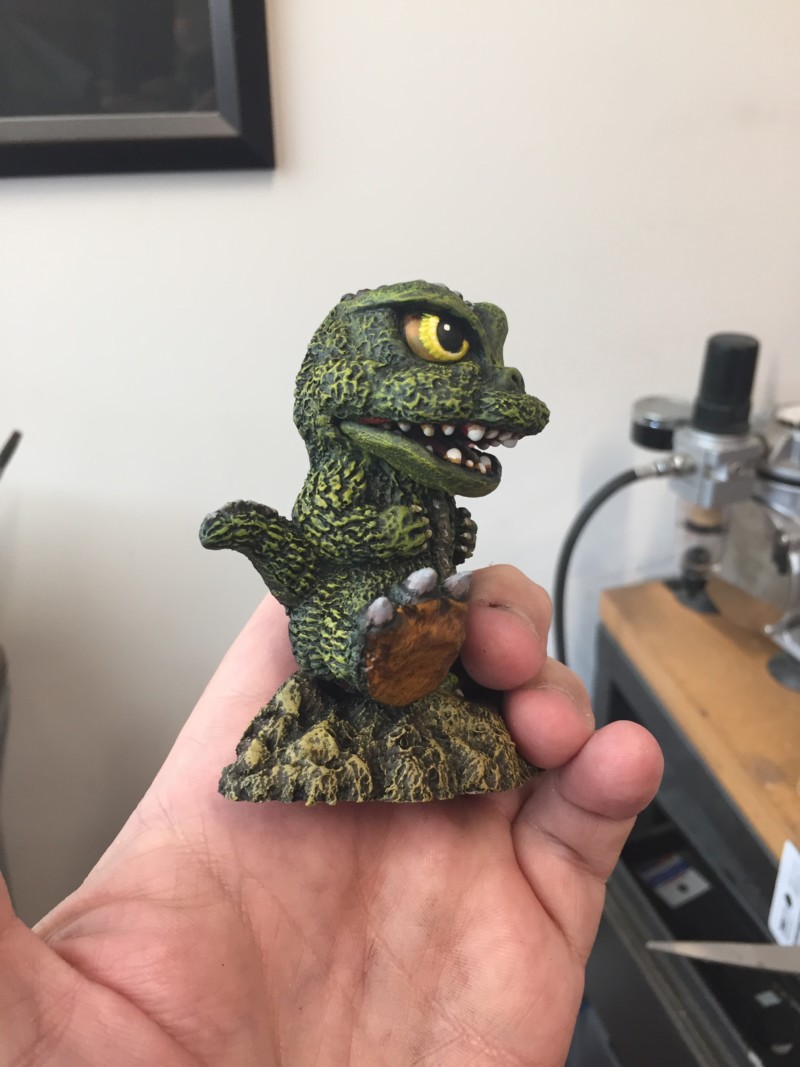 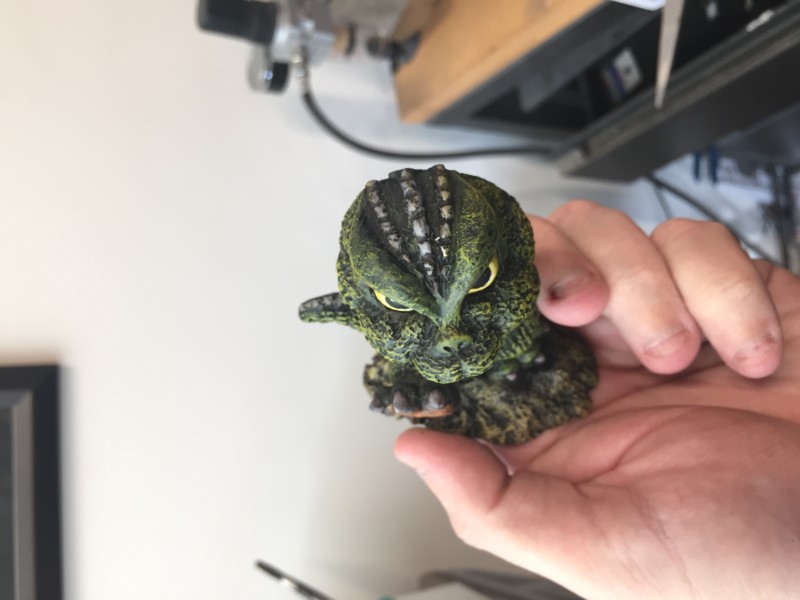 A few finishing touches later and here we are… 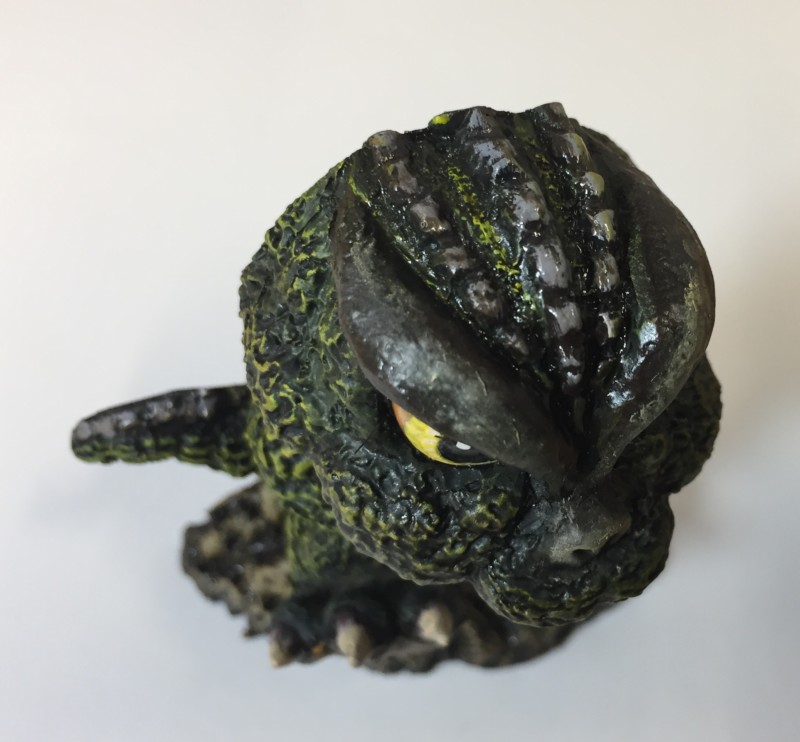 Go looking for MASH on Google. Go now. Do it.

You’ll not find a great deal in English, even in the Godzilla community.

His work (and Image themselves) deserve to be much better known than they are, and these little Kaiju kits might just be what is needed catch the cupidity of fans, both old and new.

They are simple, crude even, that is for sure. However, after looking at the range on the Image page, I think you will agree me, because – I WANT THEM ALL!

Speaking of which, Here are a couple more which HLJ already have availble. 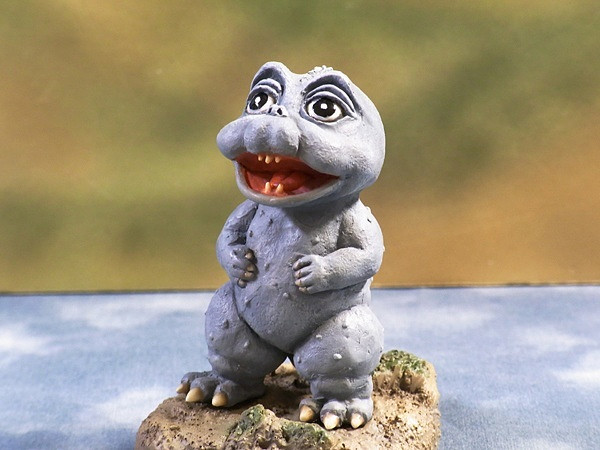 There is just something about Chibi-G that goes full on Terry Gilliam about this whole thing and gives me the giggles, right in dem feels.