Both available from HobbyLink Japan: Godzilla vs. Mecha Godzilla and King Ghidorah.

Move Over Victor. The Real Monster Maker has Arrived!

Though most kaiju fans would know it was Nakajima Haruo who is seen as giving life to Godzilla, a startlingly large number of fans still do not recognize the name of Tsuburaya Eiji, as the Father of Toho’s Kaiju, which is a shame as the director and SFX master has a career which is littered with pure filmic gold. Without him, there surely would be no Godzilla today. Nah, not just Godzilla, but Tokusatsu movies as a whole as we know them now.

Anyone really interested in the life of this SFX Genius should acquire August Ragone‘s biography, ‘Eiji Tsuburaya: Master of Monsters‘, however, here let us go over a few of the more interesting points of his career, as shared with me, both by Nakajima Haruo and from some of the Japanese texts in my collection.

His very childhood seems to have foreshadowed his later career, for he was a dedicated model maker – of planes and ships in the main – making use of whatever materials he could find, not being able simply buy kits at the time of his youth. According to Nakajima Haruo, Master Tsuburaya was lauded several times by local, and then prefectural, press as a 「子供職人」, (kodomo shokunin) a ‘child craftsman’. Indeed, the young Eiji even managed to acquire a stills camera and began photographing his creations, learning how to create effects such as false perspective, low angle shots, artificial depth of field and so on by himself.

All to give an effect of scale and reality to his work.

There is even a tale of him buying a small 9.5mm Pathe projector, examining it, and building his own improved version.

Fable or fact, I do not know, but the message is clear…

As one might expect, it was fated that Master Tsuburaya would go into cinema on coming out of education. With his huge personal experience, it was not surprising that he was soon behind film cameras (16mm and 35mm both), expanding what cinematography was as a discipline – as much as any of his peers the World over at the time. What is more though, his restless and inventive hands were also turned to conjuring up devices which have become staples of the art today.

For example, he developed his own, unique boom camera (if anyone has a photograph of this, would they link in the comments) for taking high angle shots of scenes, when it proved too expensive to acquire such booms from the US, which would not serve the master’s needs in any event.

He is also credited with developing home grown deep tank technology for filming water scenes (again, if anyone has a photo of his first sets, dry, I would like to have them here): large, indoor pool sets for example, which were still in use in the 50s and 60s when Toho co-opted them for Godzilla and for Kobayashi’s Kwaidan in 1965.

Creation defined him and the world inspired him but, according to Nakajima Haruo, it was not just because of his childish technological experiments. On one fateful day – Sept 14, 1933 – Master Tsuburaya’s views changed forever, when some of his studio peers went with him to see the model making and stop-motion animation of Willis OBrien, in the blockbuster of that year the world over, King Kong.

Even though such production values were beyond the scope of Japanese companies at the time (though, I do believe a short Japanese comedy knock off of King Kong was made, in the tokusatsu man-in-a-suit vein to cash in on, or parody the US film’s success), what Master Tsuburaya saw stayed with him and affected all he did thereafter.

He was bitten by a monster bug indeed, so when Toho approached him about the first Godzilla film, he felt he could do it justice.

Ragone suggests that much of the beauty in Godzilla comes from master Tsuburaya taking what I call a ‘Heath Robinson’ approach to the SFX in King Kong (and other such films): working out how they could be replicated ‘on the cheap’ as it were, knowing full well that even by the 1950s Japanese studios like Toho could ill afford the time, or money, on long animation schedules, the way even B-Movies in the US were going about things.

His final, outrageously logical idea – put a man in a convincing suit, and have them filmed amid realistic models at high speed to give greater scale – was genius, simple and, though not exactly cheap, at least practical.

The first Godzilla suit was something of a leap into the dark and, by Master Tsuburaya’s own admission, was crude to the point of being dangerous to Nakajima Haruo: by the end of filming he had over a dozen puncture wounds, open sores and had shed nearly two stone in body weight, owing to both dehydration and sheer exertion.

However, as the series proved popular and more monsters were required, the Old Master was not only able to refine the Big G himself, but come up with a host of other creatures which combined men in suits with other effects, my own personal favourites being Mecha Godzilla and King Ghidorah. The master himself did not live to see the first these beasts (which was nevertheless born from his experiments), as he had died in 1970, but the work he put into the perfection of the latter certainly paved the way for many future Kaiju, owing to the complexity of the Ghidorah suit.

First appearing in ‘Godzilla Vs. Mecha Godzilla‘ this suit was, as the picture below demonstrates, much easier for the Toho team to build in some respects, as it was not required to flex in the manner of a living being (at least in the final form). However, it did incorporate some features which made it something of a hazard to operate, including pyrotechnic devices in hands, feet, and torso.

Appearing first in ‘Ghidorah: The Three Headed Monster‘, this suit was perhaps the most challenging that Master Tsuburaya had tackled, in that it had no arms, but two tails, a pair of wings and three heads (all of which had to be controlled remotely). The creature’s operator, in this case Hirose Shoichi, was even more removed from the world than his co-star, Nakajima Haruo. This was because he was required to act in the suit almost bent double and blind, to accommodate the mechanisms for the wings and the three necks – only able to receive cues on what to do via crude intercom. This was essential however, as his performance had to be synched with a team of puppeteers on a gantry above the set, who operated heads, tails and wings during the ground based suit fights. Though the finished suit was a masterpiece in its own right, its complexity took its toll, as heads would often get tangled, or the strain of combat would simply snap one of the cords holding them up. After all, just as with the first Godzilla, this was breaking new ground. 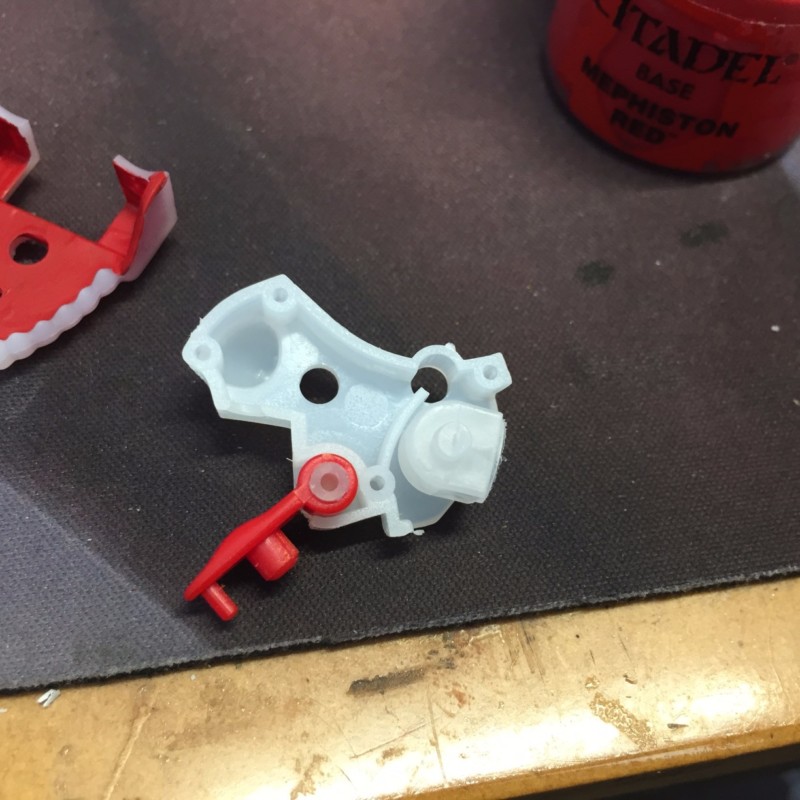 Though technically snap fit, these kits should certainly be properly seamed.

The semi-transparent styrene used for some parts is actually quite nice. All I did was matte coat them and wash them with a little sepia for effect. 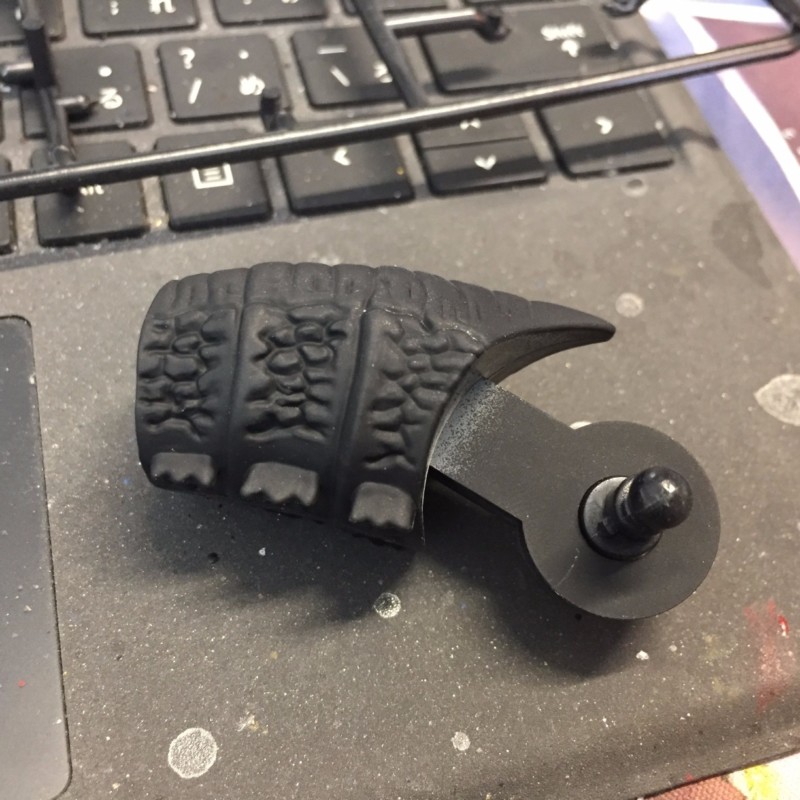 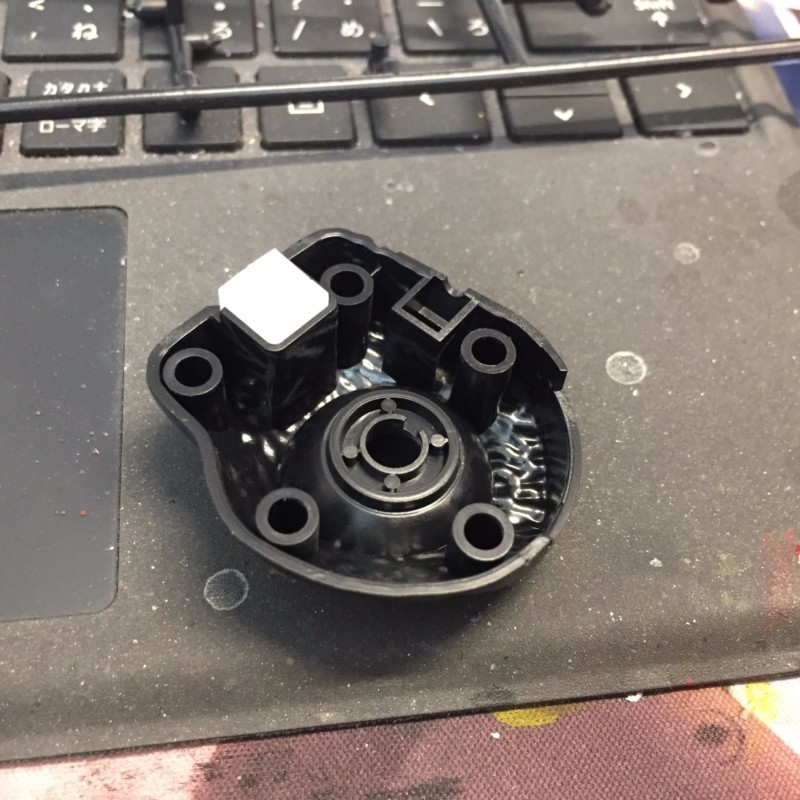 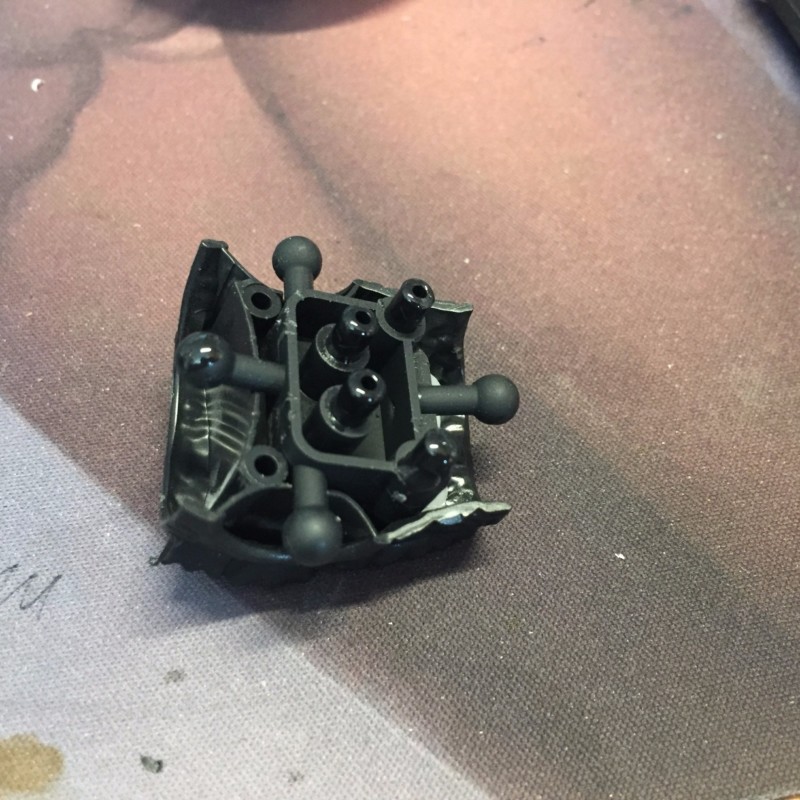 I do wish all the central spine had been made of the same styrene, but I suppose compromises needed to be made somewhere. 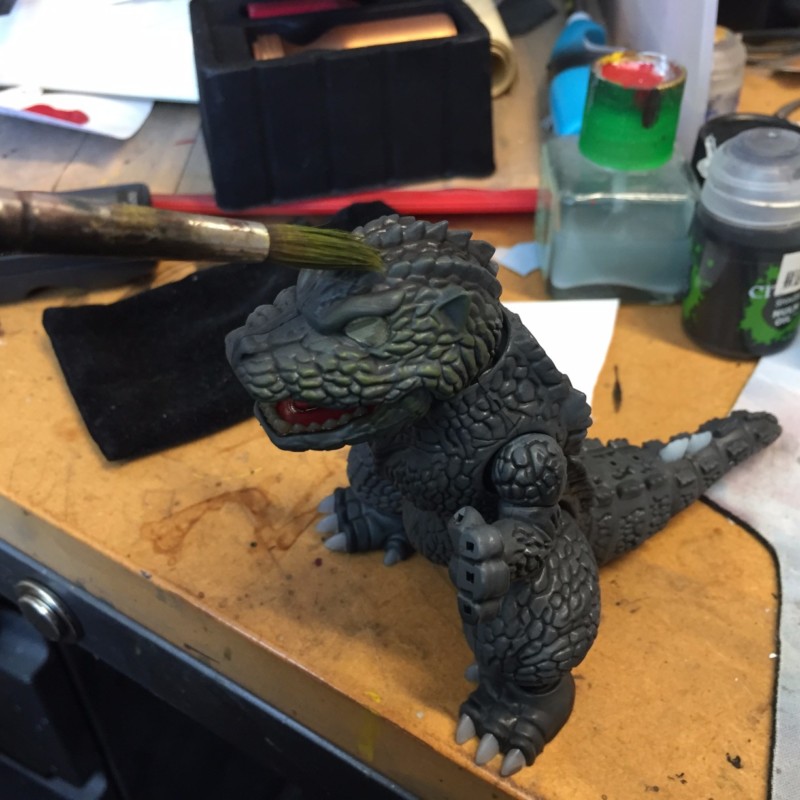 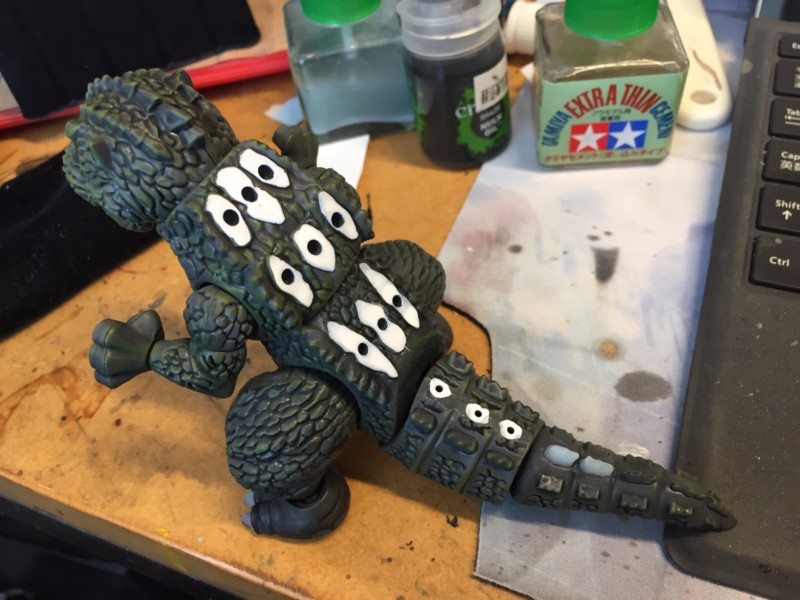 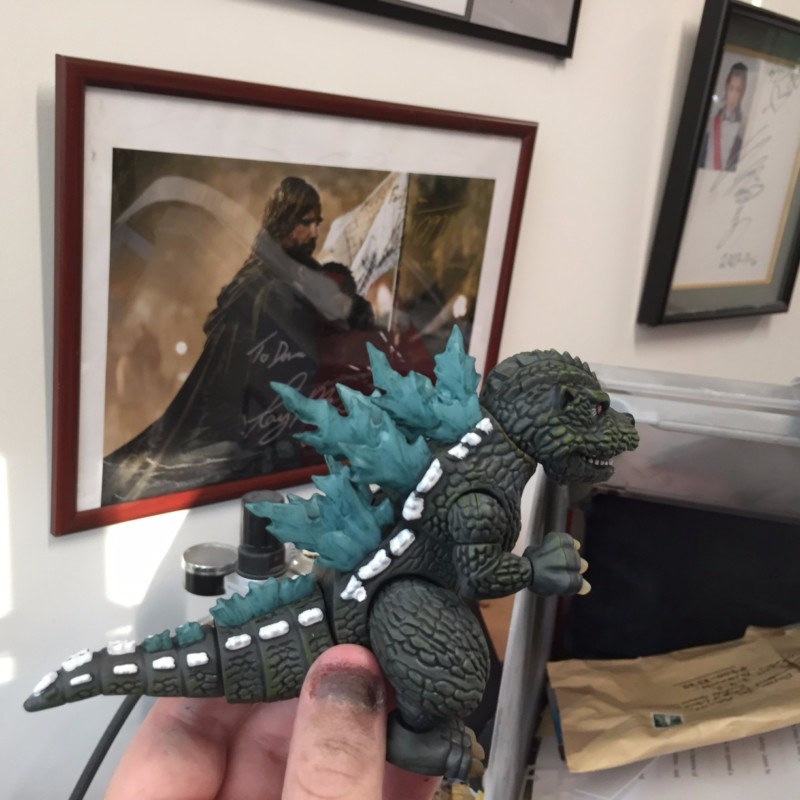 Who’s a cute little devil then?

I did not mean to try OSL on this, but once I had painted all the spines and washed them back something looked off. However, though I do not normally like the idea (well, truth be told I normally cannot pull it off well enough to make it look as it should), here it does actually work.

And, will work all the better once I can source some glow in the dark paint for the highlights. 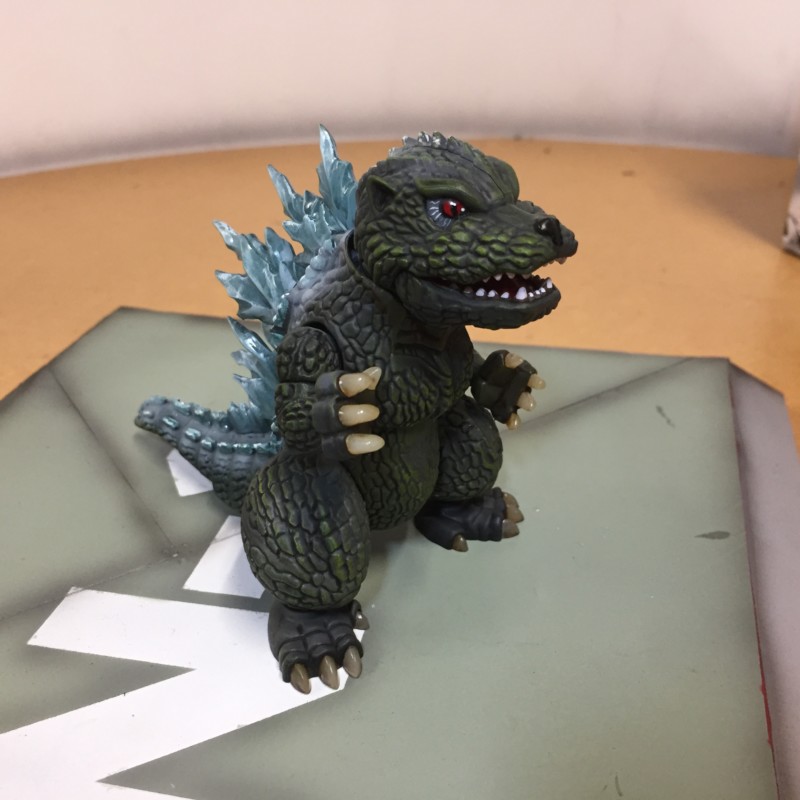 Yes… Seams. I know. However, as always this is a box build and I wanted to see how it would look straight up. I shall attend to those in the coming weeks with some filler and retouching.

However, all in all, I love this little fellah!

Now, for the naughty boy! 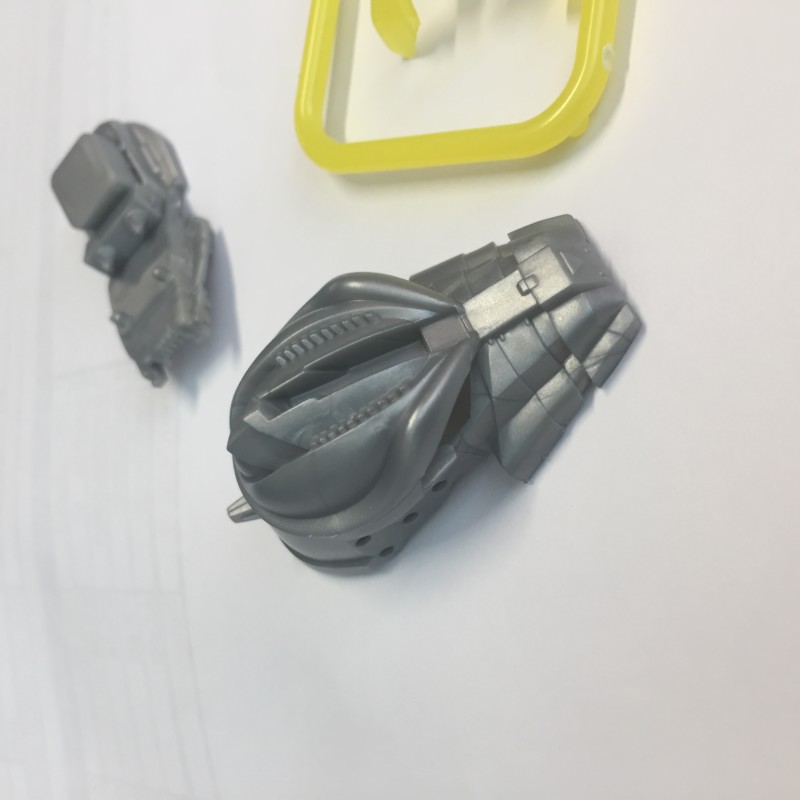 As with all the series, Mecha Godzilla is basically designed to be snap fit and quick build. Styrene quality is a bit ropey and brittle on this kit, and great care should be taken as some pins in parts are very slender. I took to ‘greasing’ the joints with thick cement (as they’ll not be coming apart anyway), which helped greatly. 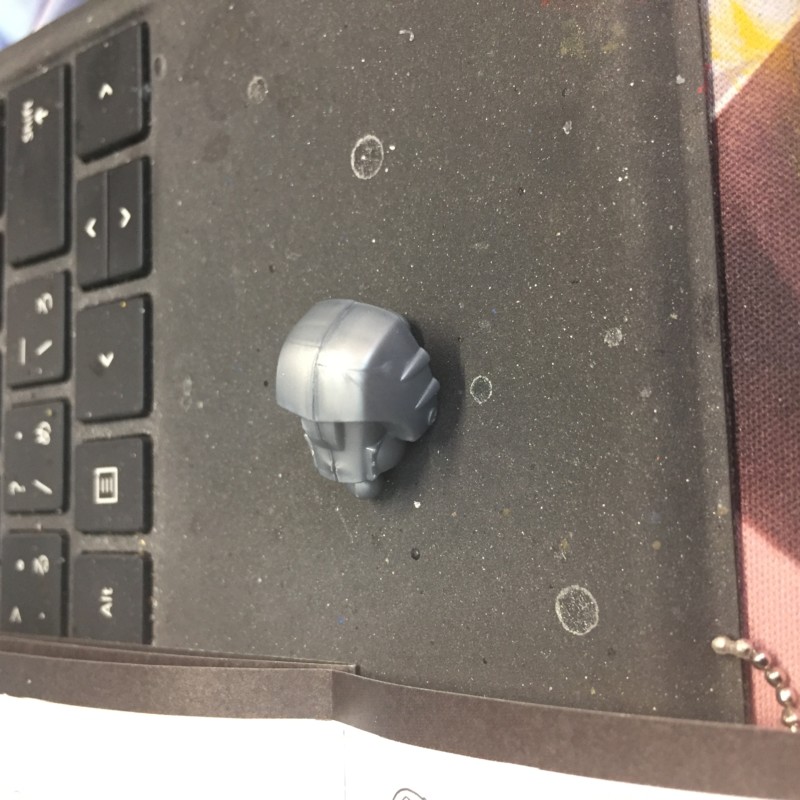 The Chibi is strong with these kits. 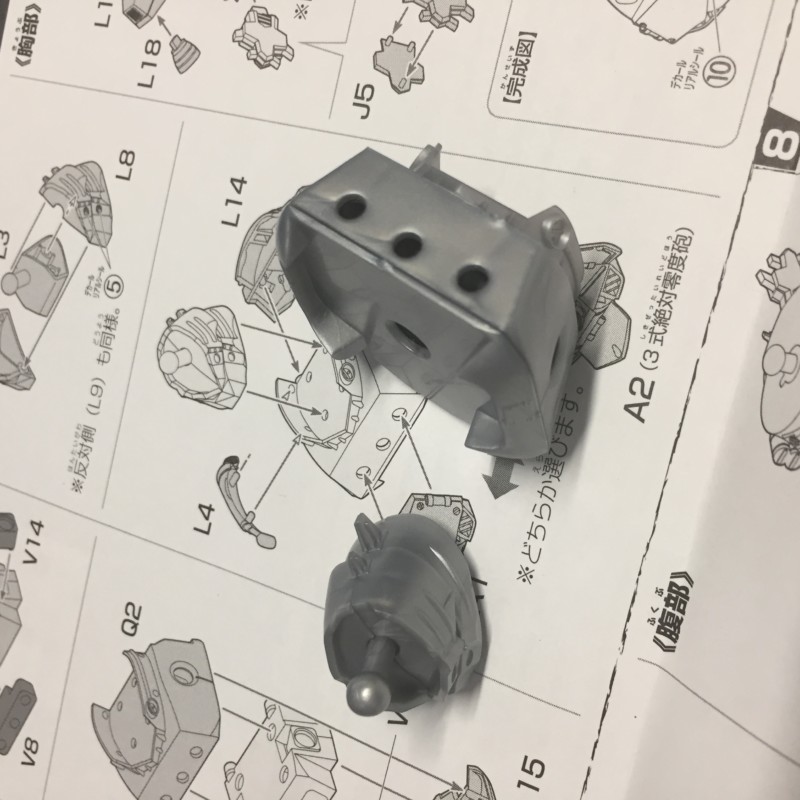 Detail is sparse, as you’d expect, but still conveys all the correct feel. 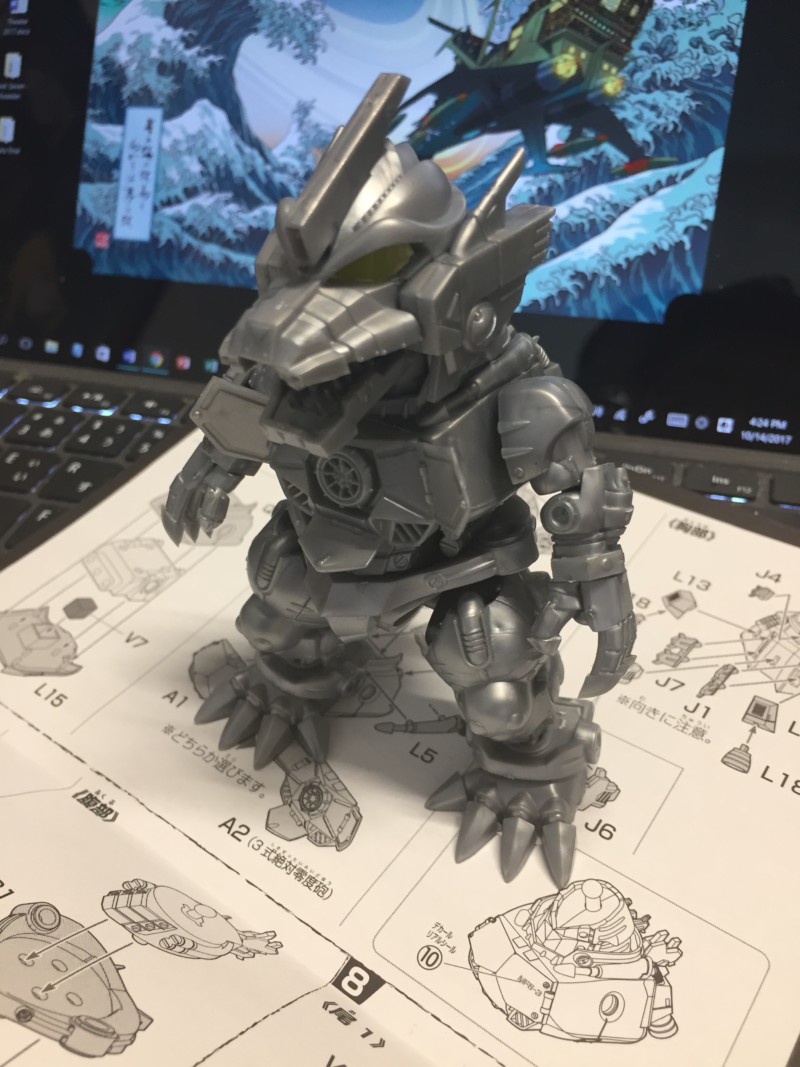 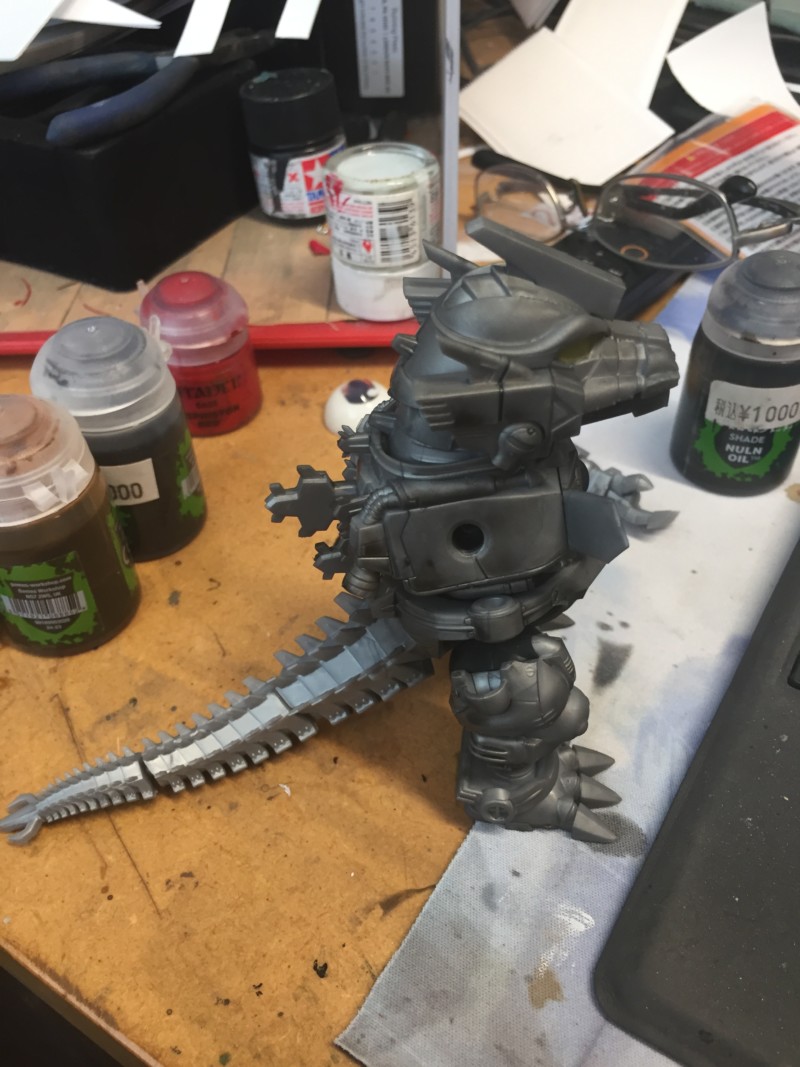 Once again, trying a little OSL for MG’s Chest Lightning. I hope to be able to source some lightning effect parts from the MSG range and fit those in the coming weeks.

Fully detailed, and side-by-side… What a pair of cheeky little chaps!

At least they are not as much trouble as their friend, Ghidorah!

Nice styrene on this kit. Seemed a shame to wash it down, but that’s my bag, as they say… 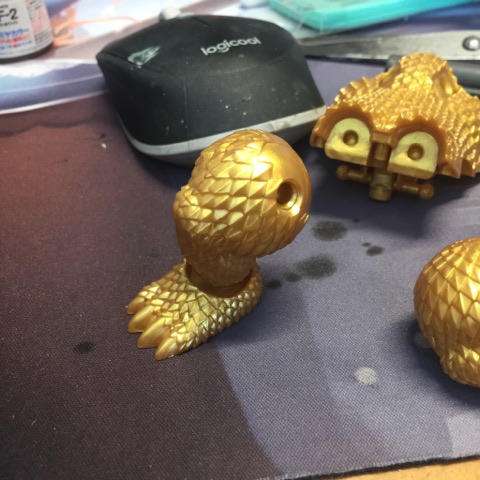 The scales here are very well defined and the jointing much more flush than on the other two kits, but at a cost. The ball joints are so fragile that one broke in his ankle as I was posing Ghidora. Nothing a drill and some plastic rod could not fix, but once again I was caught out: these are NOT toys.

Though all the kits come with stickers, I wanted to paint in the details – mouths, eyes, etc. – to be sure of them, as the material provided was too ‘thick’. 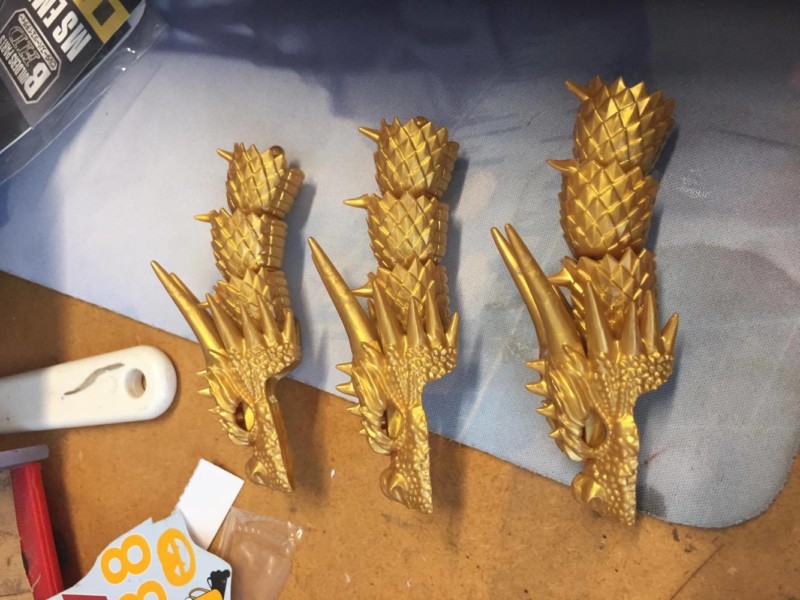 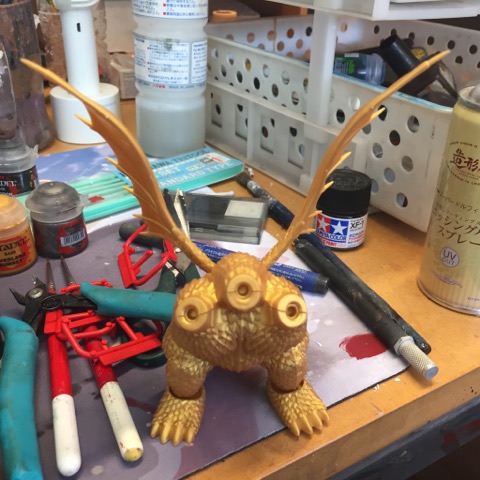 Another weak spot of which to be aware. 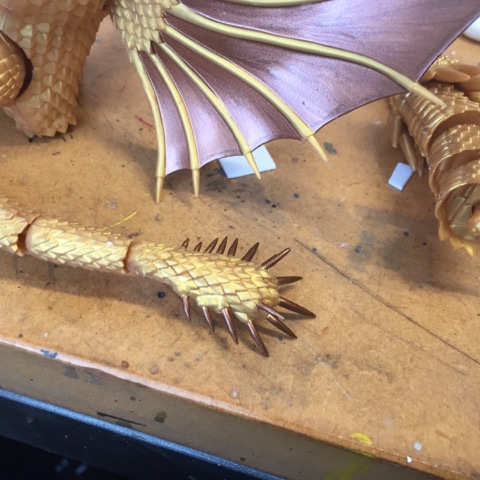 With a busted ankle and not able to stand on his own, a quick base was needed.

As for his finishing, I matte coated him and washed him back with sepia, before painting in the wing panels in bronze (not canon, but I wanted to emphasize the contrast) and then went in with Alclad Shining Gold, in line with the scales, to give Ghidorah’s skin some of its pop back.

Not nearly as silly as I feared he’d look… 😀 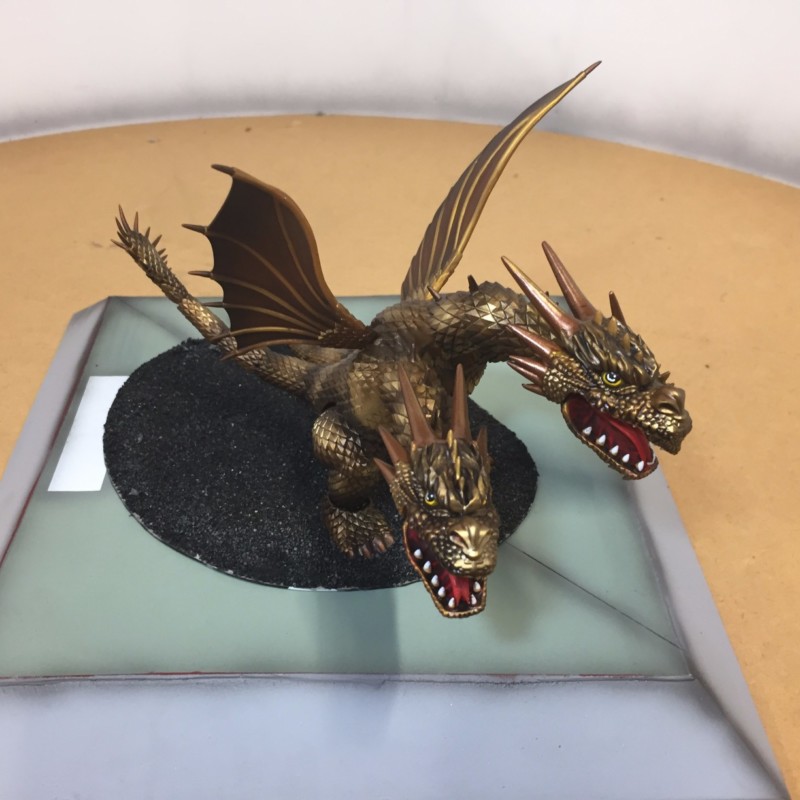 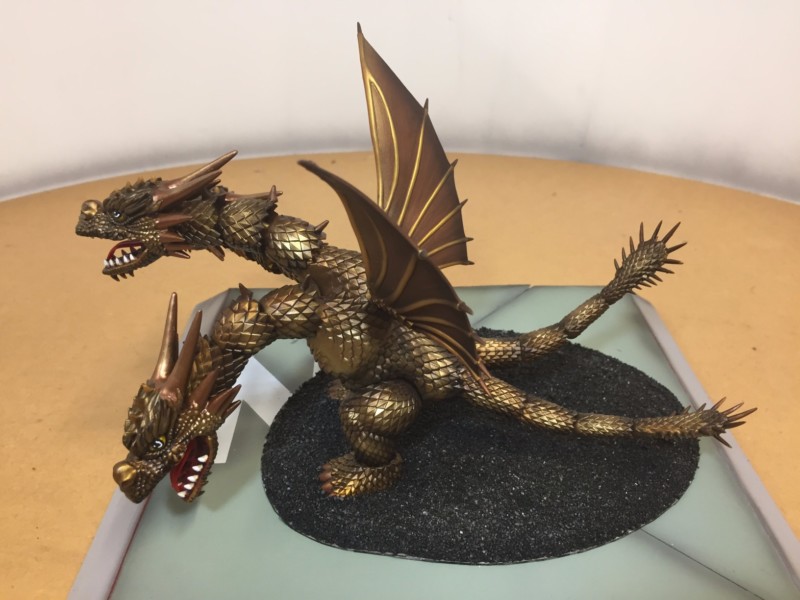 You can more clearly see the Alclad effect here on this top down view. I think it sets the kit off better, along with some washing than a simple flat gold.

These are charming little kits, which come in at a decent place in the market for those who want something ‘chibi’, but do not want to tackle resin garage kits.

I might have preferred fixed pose models with less obvious joints, but I also feel that Fujimi is calling back to the glory days of SD kits at the end of the 1980s, and in that regard these models fall right into the line with that aesthetic.

I do like chibis myself, and whilst I think I prefer the purer lines of the garage kits, I cannot regret making these kits, and will certainly add other Fujimi Kaiju to the pack.