Until now, if you wanted a Perfect Grade version of the Aile Strike Gundam you had to have both the PG Strike Gundam and the separate PG Skygrasper. Now, as part of the Gunpla 30th Anniversary campaign, Bandai is pulling out all the stops and offering them together in one set! This set also features special clear armor parts (in place of the “regular” armor parts…only the clear armor parts are icluded), making it all the more unique.

The enjoyment found in constructing a Perfect Grade kit isn’t necessarily found in its size but in the engineering and design used to create these highly articulated machines. Now that engineering know-how is on display with the use of the clear armor parts allowing viewers to see what is going on “under the skin.”

The “camera eyes” light up with internal wiring and a single LED. Not surprisingly, a lot of parts are required to create the exquisite detail we’ve come to associate with the Perfect Grade series — over 550 ABS plastic parts, plus polycaps for the joints, die-cast joint parts for stability, and of course the LED and wiring for the head (requires one CR1220 watch-type battery, sold separately). Parts are included for a Beam Rifle, shield, Armor-Schneider blades, and of course the positively enormous Grand Slam sword — this last beautifully plated in silver! The PG Skygrasper also comes with the Aile Striker; you can build and display them both on the included display base, or integrate them into your PG Gundam. A truly special set! 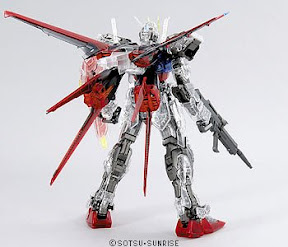 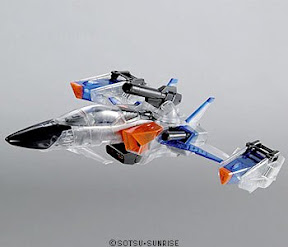 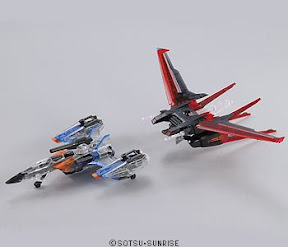 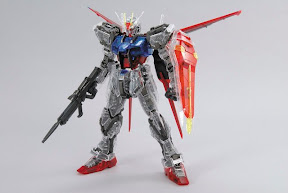