The Mitsubishi Zero series of planes have long stood tall in the minds of veterans, wargamers, and modellers alike since the US first endured their wrath at the opening of the war. Since then, something of a myth was raised around the ghost of the Zero, before it was utterly busted, and finally reassembled around the genius – admittedly flawed genius – which went into the design of this aircraft.

The main areas of complaint surrounding these fighters seem to focus on the poor guns, light frame (sans armour for the pilot), poor control surfaces, and lack of self-sealing fuel tanks.

All of which could be said of the first marks, which flew operationally between 1940 and 1943, when the improving US fighters operating in the Pacific prompted responses from the Japanese Navy Armament Board.

The Father of the Zero

Just as the A5M fighter was entering service in 1937, its successor was already being laid down on the drawing board, as data from both the opening shots of the Spanish Civil War and the A5M’s own combat deployment in China demonstrated a number of improvements which could easily be made.

The main issue that the designers faced when creating an all-round carrier strike fighter (as the zero was also to carry bombs as part of the Navy spec) was that the number of compromises all contributed to what should have been a total disaster, rather than the practical plane which eventually did emerge to strike Pearl Harbor.

An operational speed of at least 350mph – using already available engines – with a two-hour (patrol speed) and six-hour (economic flight) range immediately necessitated that the final craft be reduced in weight considerably. This is where the main flaws of the fighter were designed into the plane. A skeletal frame, with a reduced ammunition load, for poor guns, little armor and lighter, non-sealing fuel tanks.

However, these flaws were much the same as those in carrier based fighters in all countries at the opening of the war. The British leaned heavily on the under-gunned and fragile Blackburn Skua and the Gloster Sea Gladiator among a variety of fighters and torpedo craft. On the other hand, the US carrier fleet relied primarily on the Brewster Buffalo, Curtiss Helldiver, and the Gumman Wildcat in the early years of the war.

A close examination of carrier fighters, not land based, introduced to service in 1940 will reveal that every side faced weight, wingspan, range, and firepower limitations. Horikoshi Jiro, the mind behind both the A5M and the A6M2, put into the air a compromise aircraft that could, thanks to brutal weight saving measures as well as a unique form of Duralumin in the airframe, not only outperform every one of its carrier peers, but also stand up to many of the land-based fighters of the period (at least on paper).

It may seem ironic that a man so openly opposed to what he saw as a futile war – for he had traveled widely and understood that it was logistics and materials (human and otherwise) which determined victory, not the finest weapons – would be so willing to work to the very end, producing and refining aircraft which were the best which could be managed. However, as many of his colleagues have attested, he was a man of his nation, doing his duty as he saw it.

The Men of the Machines

Horikoshi’s ‘compromise machine’ was also made more formidable by the fact that the design team impressed on the Navy the need for pilots to be strictly trained not only about the A6M’s strengths, but also – and even more strictly – about its weaknesses. This was certainly taken to heart – perhaps partly because naval pilots simply had to be of exceptional skill in order to manage even a take-off, or a landing on Japan’s narrow decked carriers such as the Akagi.

With a strict, perhaps overly strict, regime of flight tuition and aircraft awareness, as well as two years to put the A6M into service over China before the Japanese ran headlong into the then-relatively poorly prepared US naval air fleet, it is not surprising that Japanese pilots were racking up a 10 to 1 ratio of kills in what we might call the Pacific version of Germany’s U-Boat’s ‘happy time’.

However, therein lay another of the A6M’s weaknesses: it required a skilled pilot to make the most of it. And training a skilled pilot required fuel. As the war progressed, the time given over to training new recruits dropped considerably, and so when seated in planes like the A6M7, which could still hold its own against many US fighters, or the J2M which easily matched them, the lack of training told.

Ironically, on the other side of the Pacific, the US  – with fuel to spare – did not disregard the lesson of the early war, and made sure that, by 1943 their own navy pilots were going into combat with upwards of 500 hours flight training time, at least 200 of which would have been on their designated aircraft type.

The Japanese stressed quality over quantity, and this told in the early years of the war. However, by the Battle of Midway the US could have its cake and eat it too: quality pilots, trained for much longer than their IJN counterparts, in increasingly magnificent fighters and turned out in numbers that that Japanese could not hope to match (perhaps in a ratio 3 to 1 by 1945).

It is no wonder that one of the largest and last great battles of the war in the Pacific became known colloquially as the ‘Great Marianas Turkey Shoot’ as the US pilots did to the IJN fighters what had been done to them so roundly in 1942.

The A6M did its best, and still was winning praise from allied observers and engineers at the war’s end, as were the men who flew it with such determination against seemingly unnumbered foes, in comparable, and often much better, craft.

Six of One, Half a Dozen of the Other

A radial engine nut, I am totally honest, but the Zero was the first toy plane I ever owned (a present from my Uncle) and I could not get over the shape of the nose…

This kit is, therefore, not just a journey into familiar territory, but the last in a line of builds which have taken me from the prototype to the end of the war – building in different scales and from different manufacturers – in a sort of Horikoshi family tree.

I’ve liked what Hasegawa has been doing with its molds of late, and have especially come to appreciate the improvements in its stock poly, which takes liquid cement so much better than previously.

Oh, how I hate this… Critical, I know, but I always manage to bog it up somehow. Not pressing the mask home properly, and getting seeping. Forgetting to place mask in the concavity and blacking out the canopy from the inside. Or worse of all, getting it all right, then matting down the plane *AFTER* removing the mask… Yeah. That was a thing. 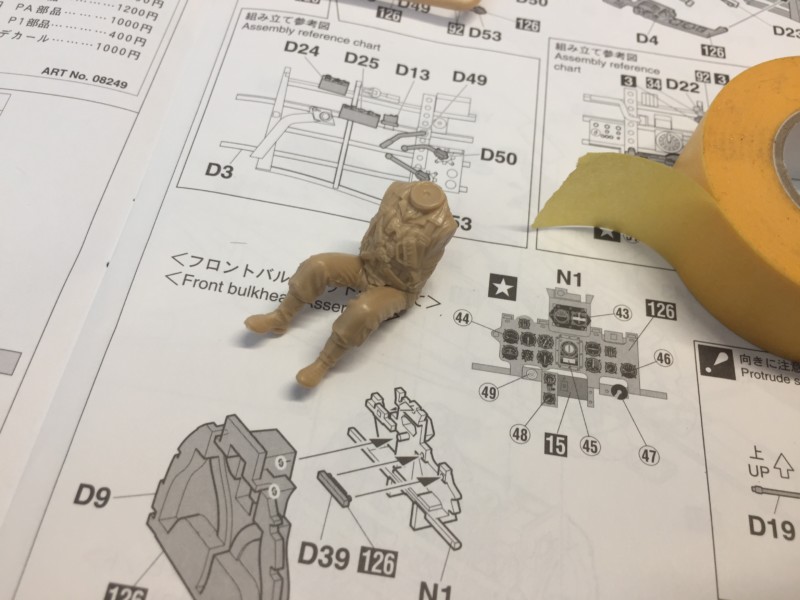 Perhaps a little soft in the detail compared to Tamiya figures, this pilot is still a well-made figure and comes with three heads from which to choose. 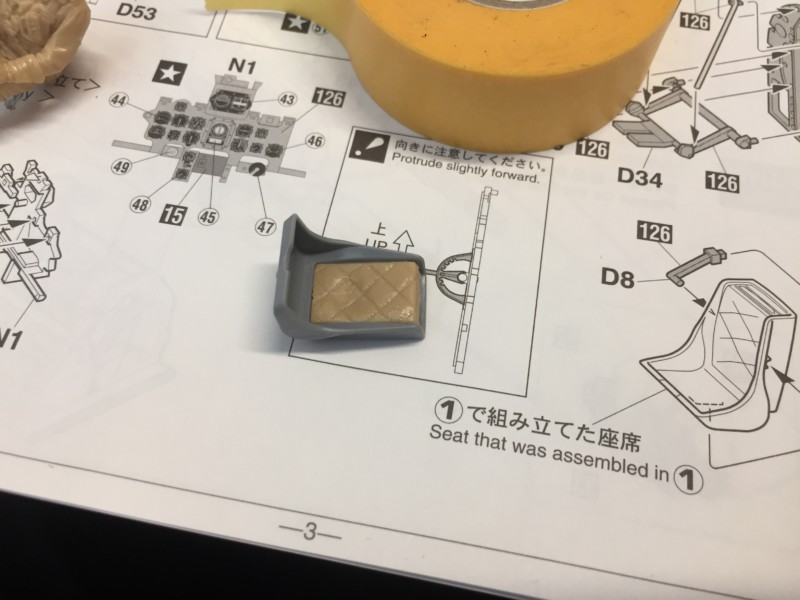 Excellent cockpit detailing here, and taking a leaf out of Tamiya’s book perhaps. Not quite as hyper detailed, but defined enough for most any modeler. I myself opted (in my usual speed build style) to omit painting detail which would not be visible (as I was going for a closed cockpit, in flight model).

Aaaaaaand we have mistake number one. I base coated the pilot and washed him down with Nulm Oil, but did not highlight him or paint in the face… Oh well. 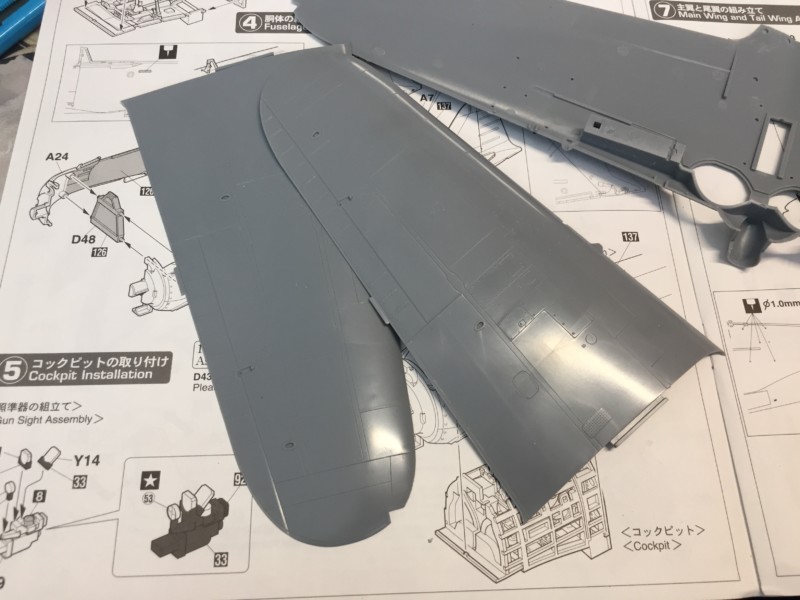 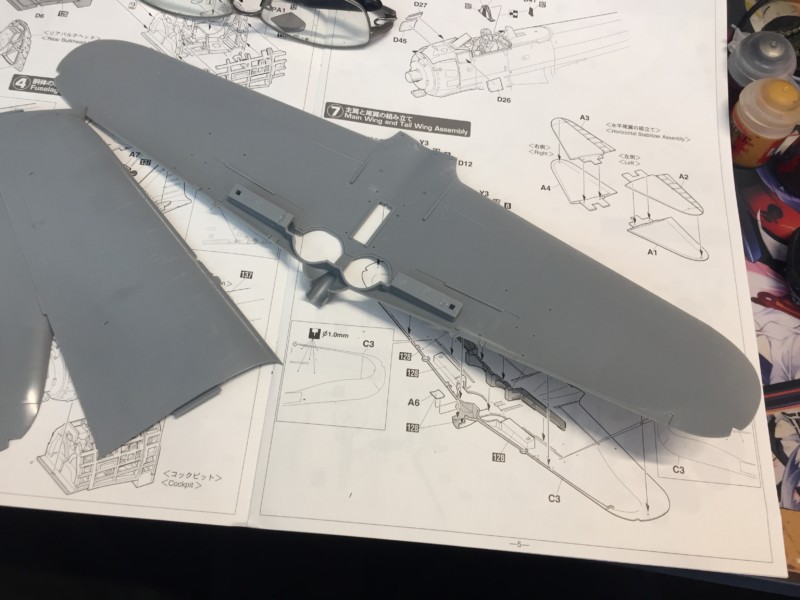 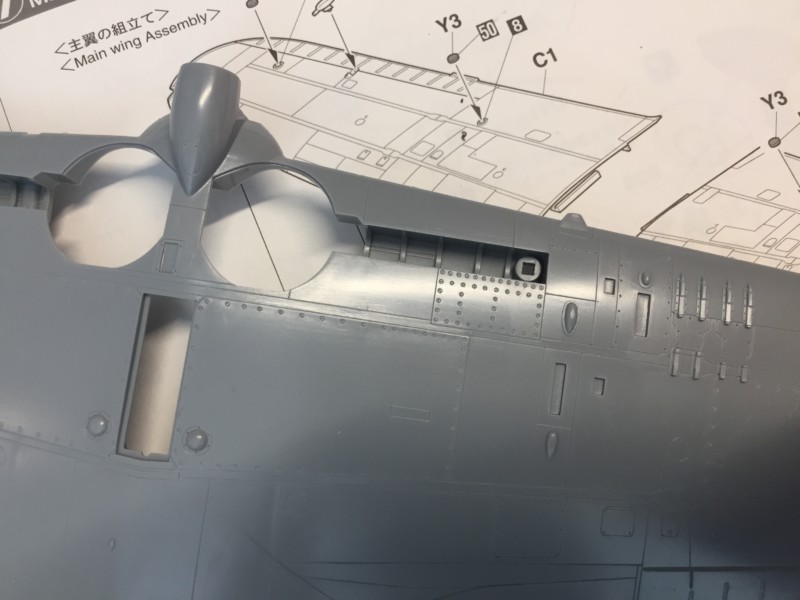 So far, every joint has matched perfectly, and not a spot of filler has been needed. No warping, or flashing either, and the detail is oh so crisp.

Aaaaaaaaand mistake no.2. Guess who put the nose guns into the model. I know… I know… the M7 had them removed to accommodate the larger power plant. 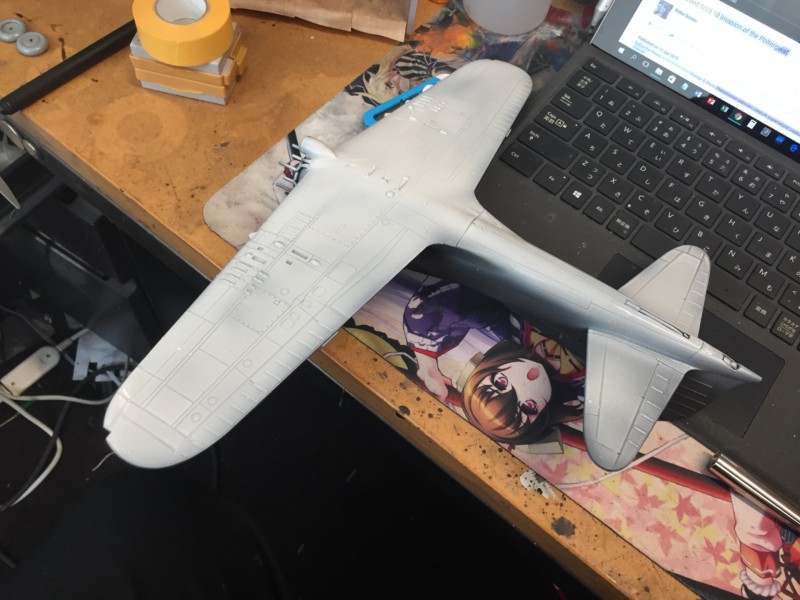 A mix of under and overshading here. However, I’d like to try a little something on my next build: undercoating in metal, then using tape to remove the top coat in places like the leading edges. If anyone has any tips and tricks on how to do that, please (and I do mean it) drop me a line.

I appreciate that the engine cowl clips into place and is held on by the prop. Would be a shame to permanently mask such a nice plant.

As always, Hasegawa decals are fine, almost to point of fragility. Too much mark setter or softener here will be your downfall on the rondels especially. They take forever to become detached from underlying paper, even in warm water. 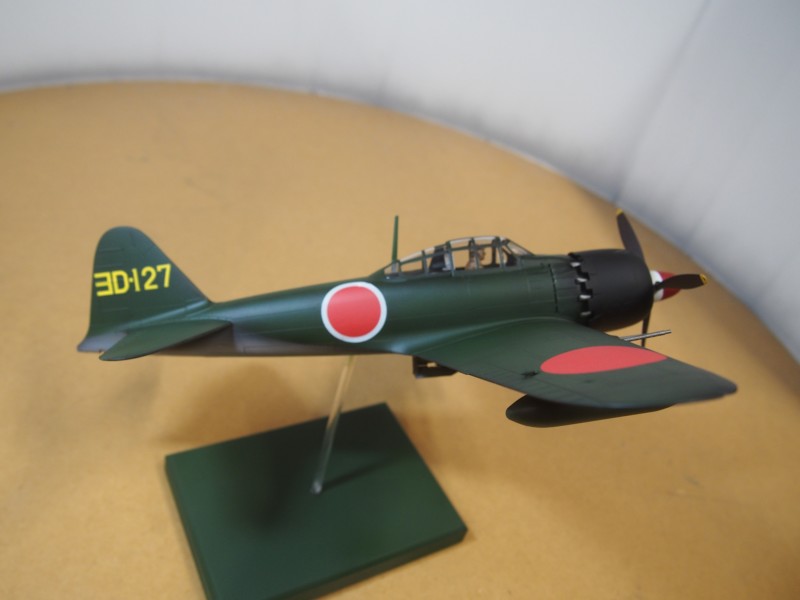 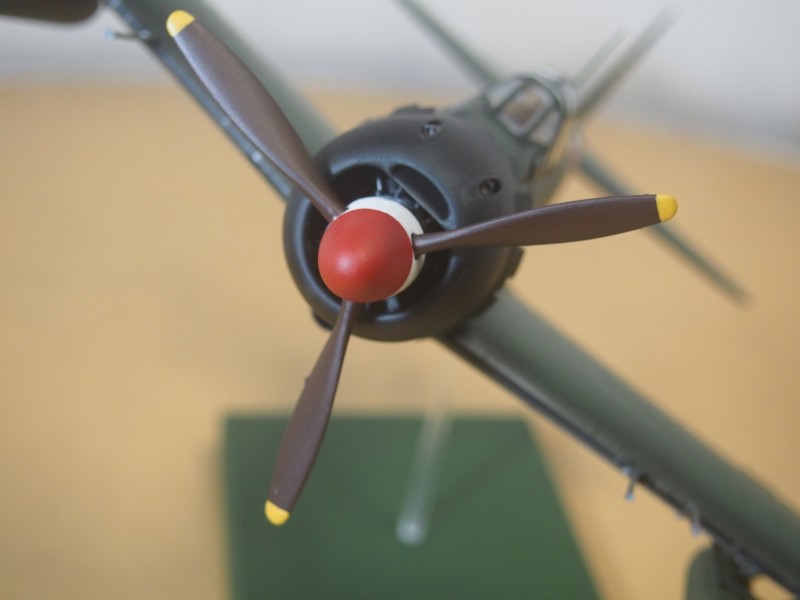 The last of the Zeros, looking like beauty itself.

I’m going to have to take a closer look at Hasegawa’s 1/32 aircraft range, as I like the scale, but not having to shell out near to a hundred USD for Tamiya’s and Volks’ (admittedly superb) offerings.