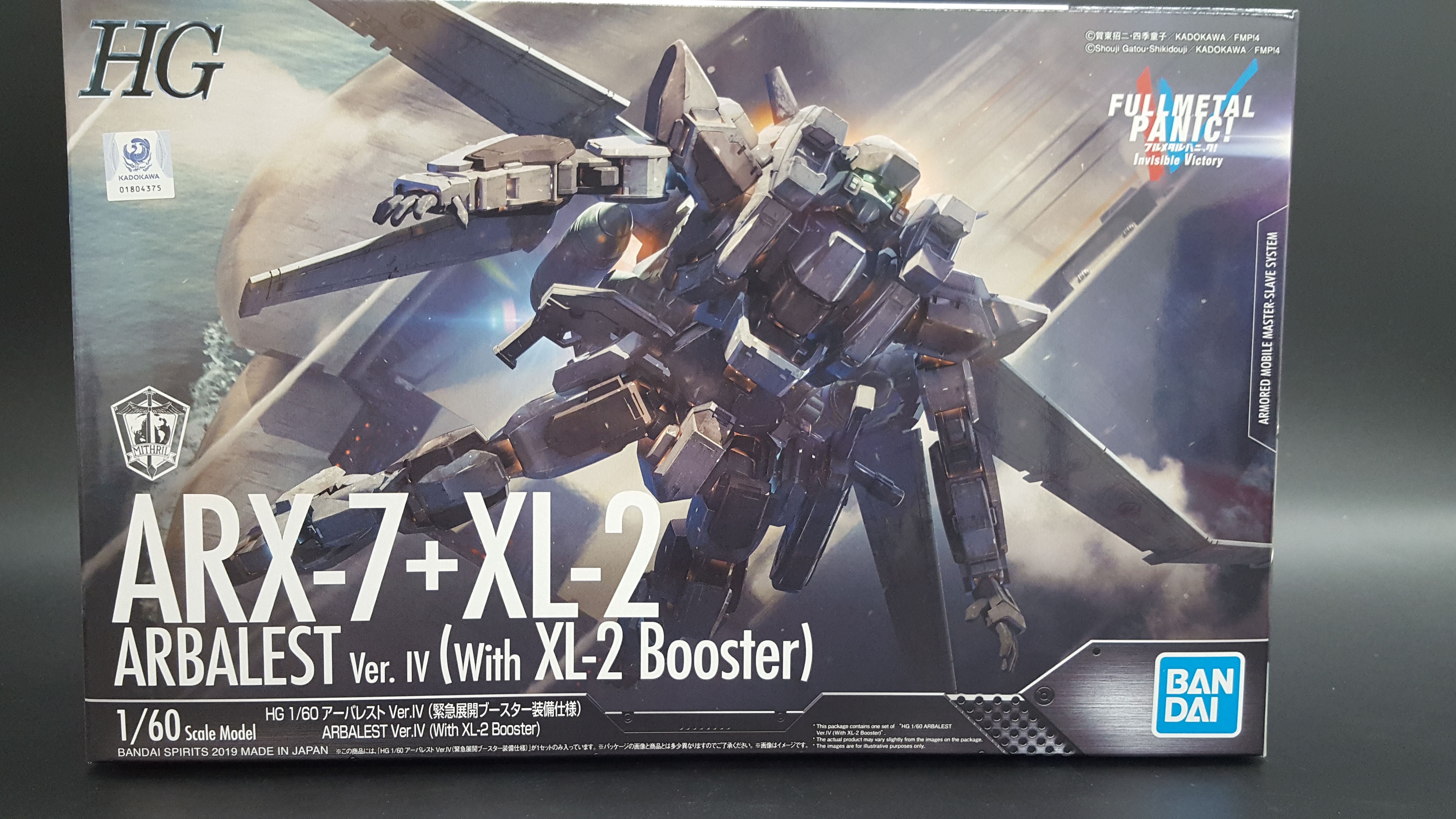 The 1/60 Arbalest was originally released by Bandai in 2018 as a new model kit, and has gone through just a couple of new iterations since then. The latest, which just hit shelves last weekend, is the 1/60 HG Arbalest Ver.IV (with Emergency Deployment Booster Ver.), which is a rebox of the previous version with new parts.

I don’t personally know much about “Full Metal Panic!” but I do know this is a pretty bulky kit that looks like it has a lot of potential for some cool display options. 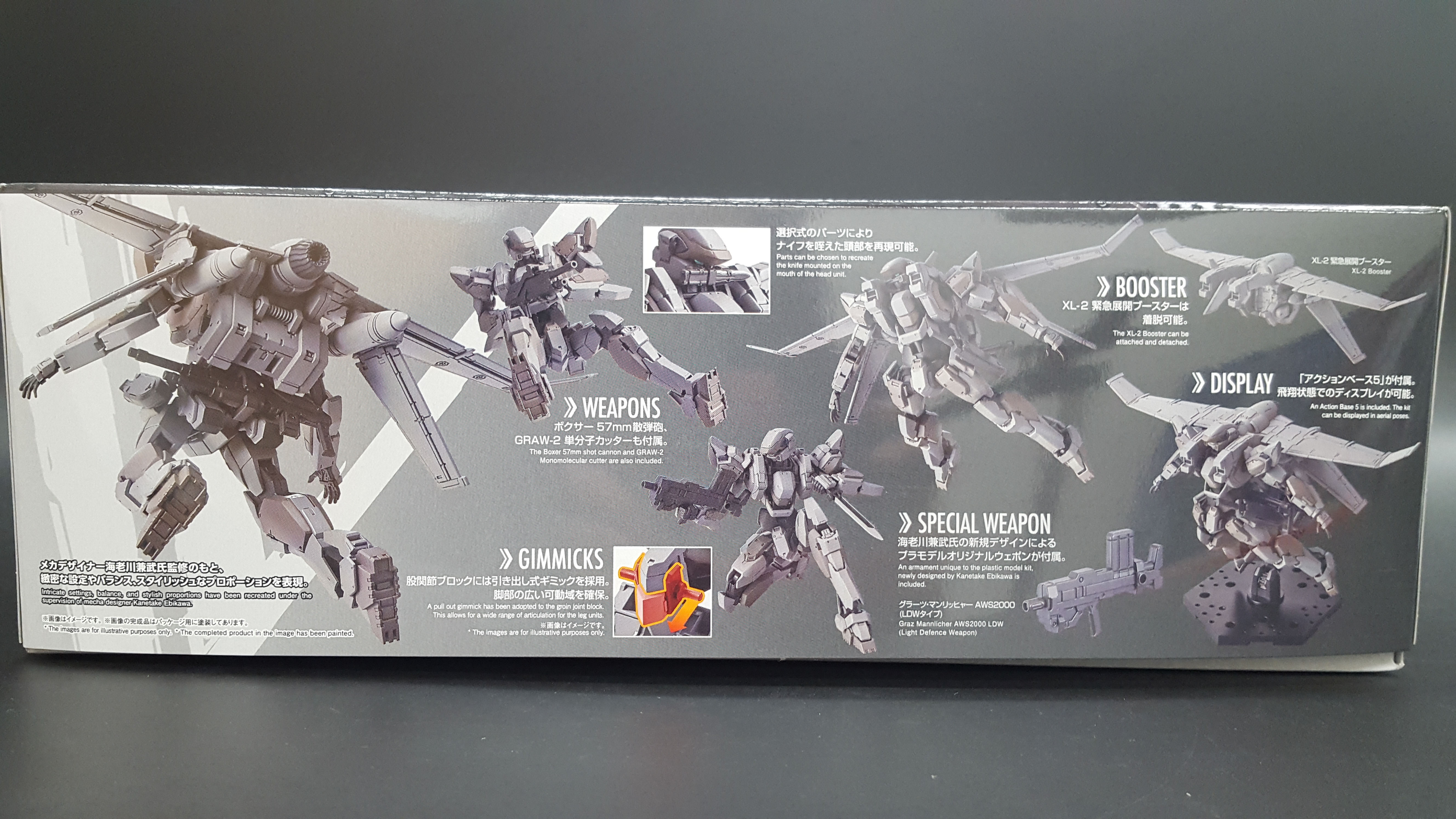 As always, Bandai first breaks down the main features of the kit so you can see everything you’re going to be able to build:

I really like that the Action Base is included — this means you’ve got everything you need right in the box to display the completed kit, which is also going to cut down on the shipping cost (even if only a little bit) since you don’t have a whole separate box for the base. At 3,400 yen, the 500 yen Action Base 5 means that the you’re paying about 2,900 yen for the kit itself, which isn’t bad for everything you’re getting.

In a way, this is like two kits in one box to me. The XL-2 Booster is a big enough piece of equipment on its own that it’s kind of like 1.5 model kits in one box: the base Arbalest — whose original release is available for 2,380 yen — and the XL-2 Booster. Overall, a pretty good value for everything in the same box, with updated tooling to boot!

Moving on to the other side… 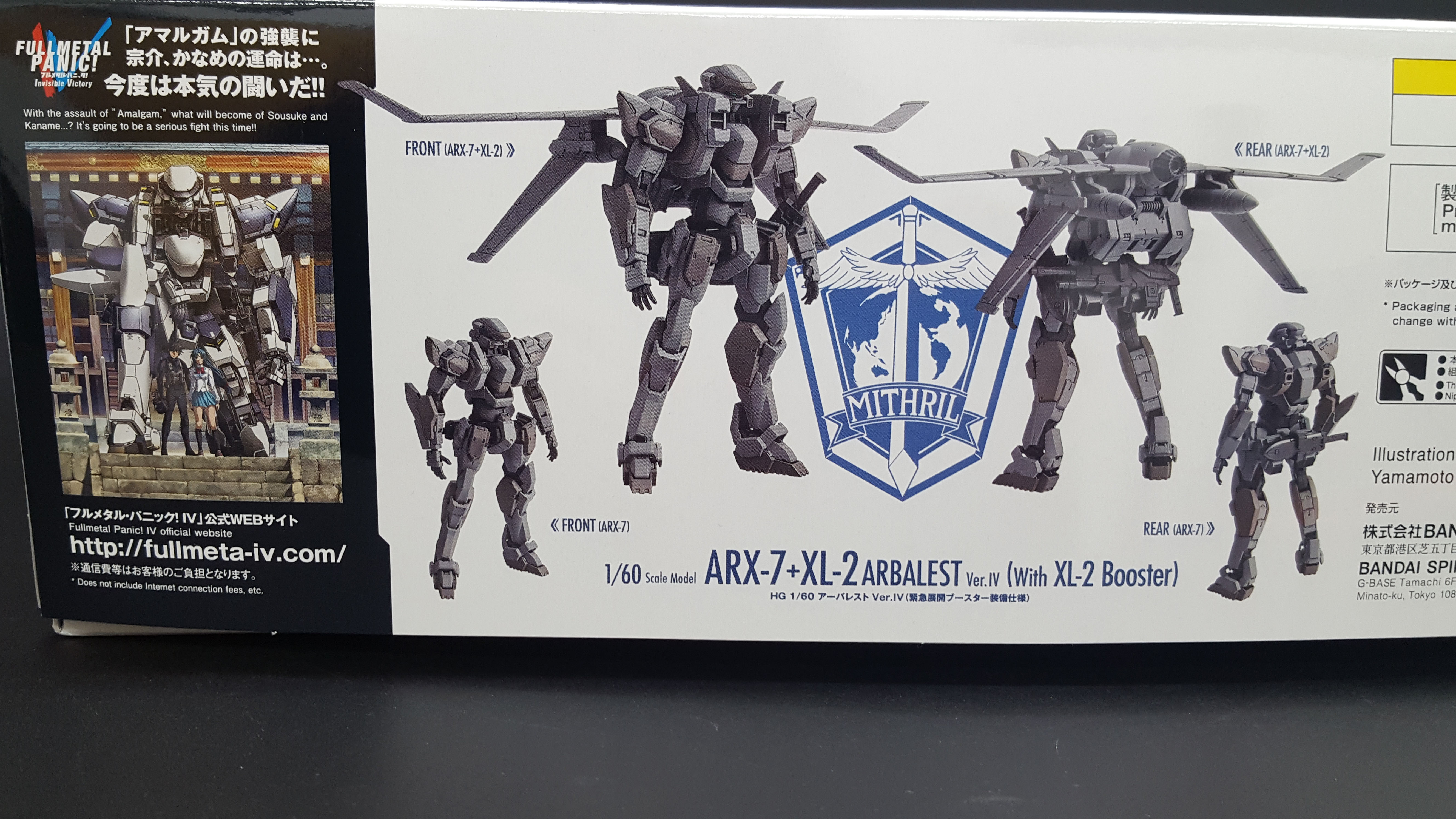 Here you can see the different display options for the ARX-7 with and without the Booster. And of course, there’s a plug for the series itself right alongside it.

There’s not much to see on this end of the box, so let’s jump right into this big pile of plastic! 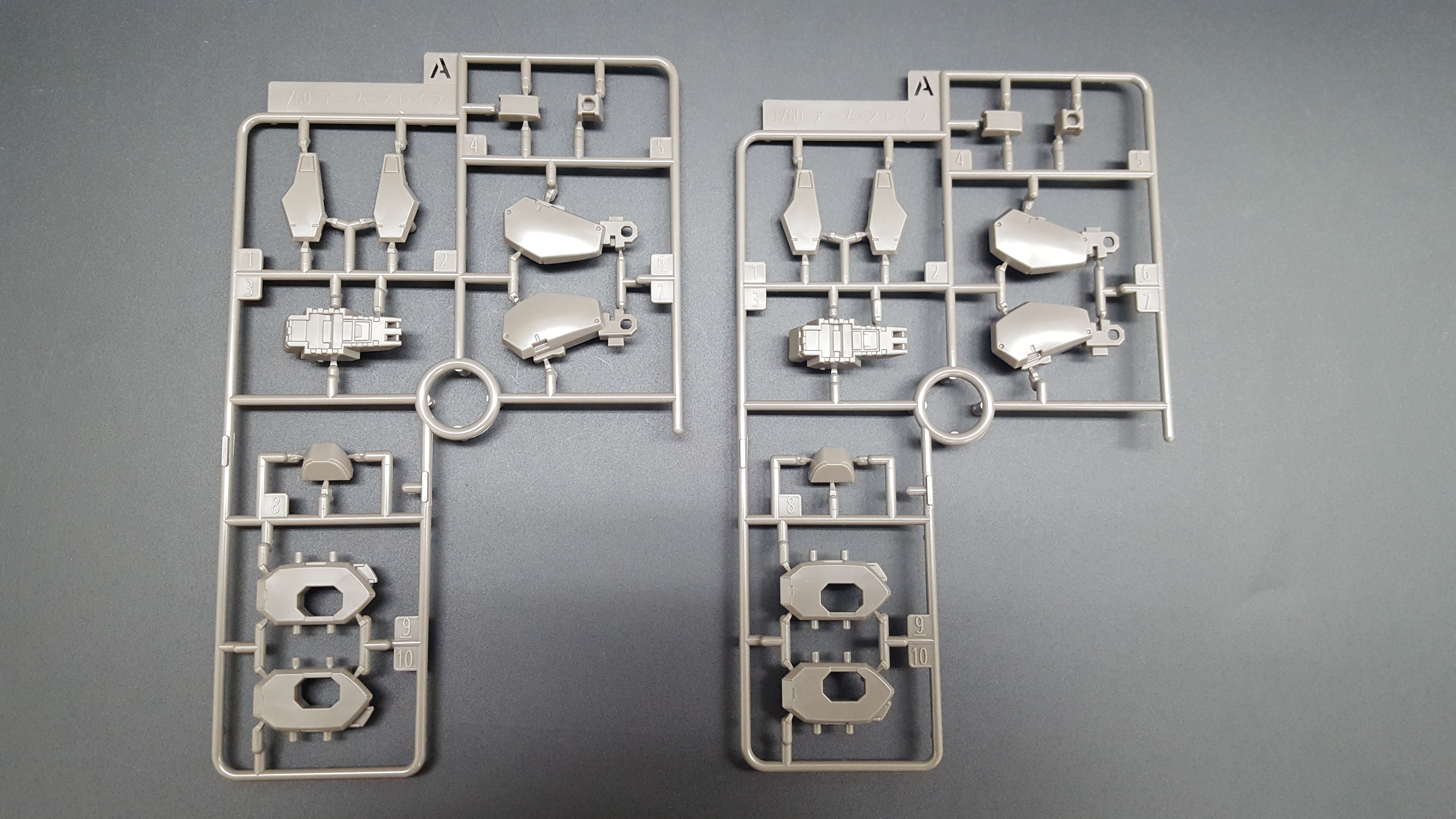 There are two identical A runners in a light brown-grey color. I’m mostly seeing shoulder panels, here, with a few other miscellaneous parts. 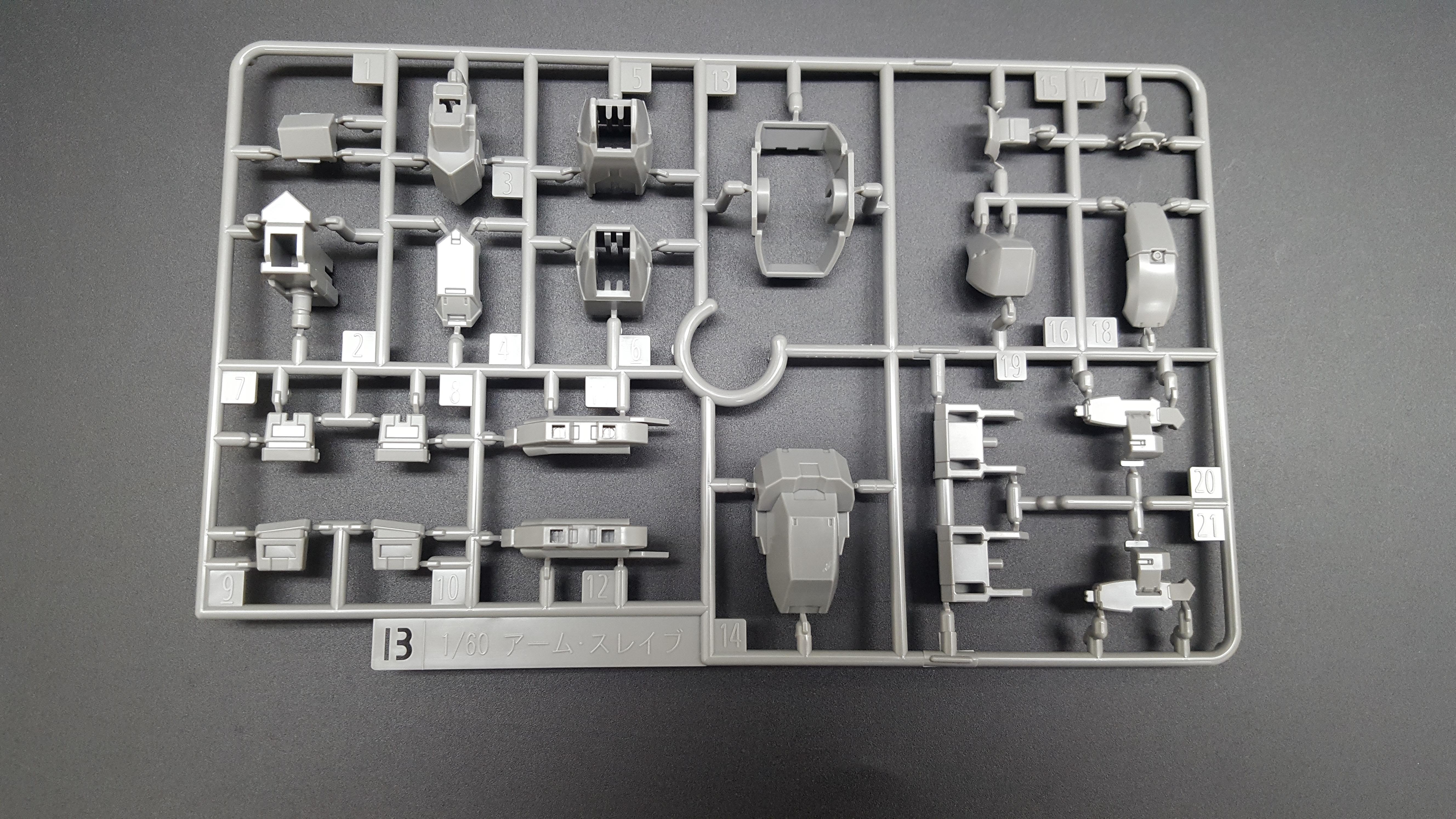 The B runner comes in a classic mecha grey, one that we’re going to be seeing a lot of in this kit. 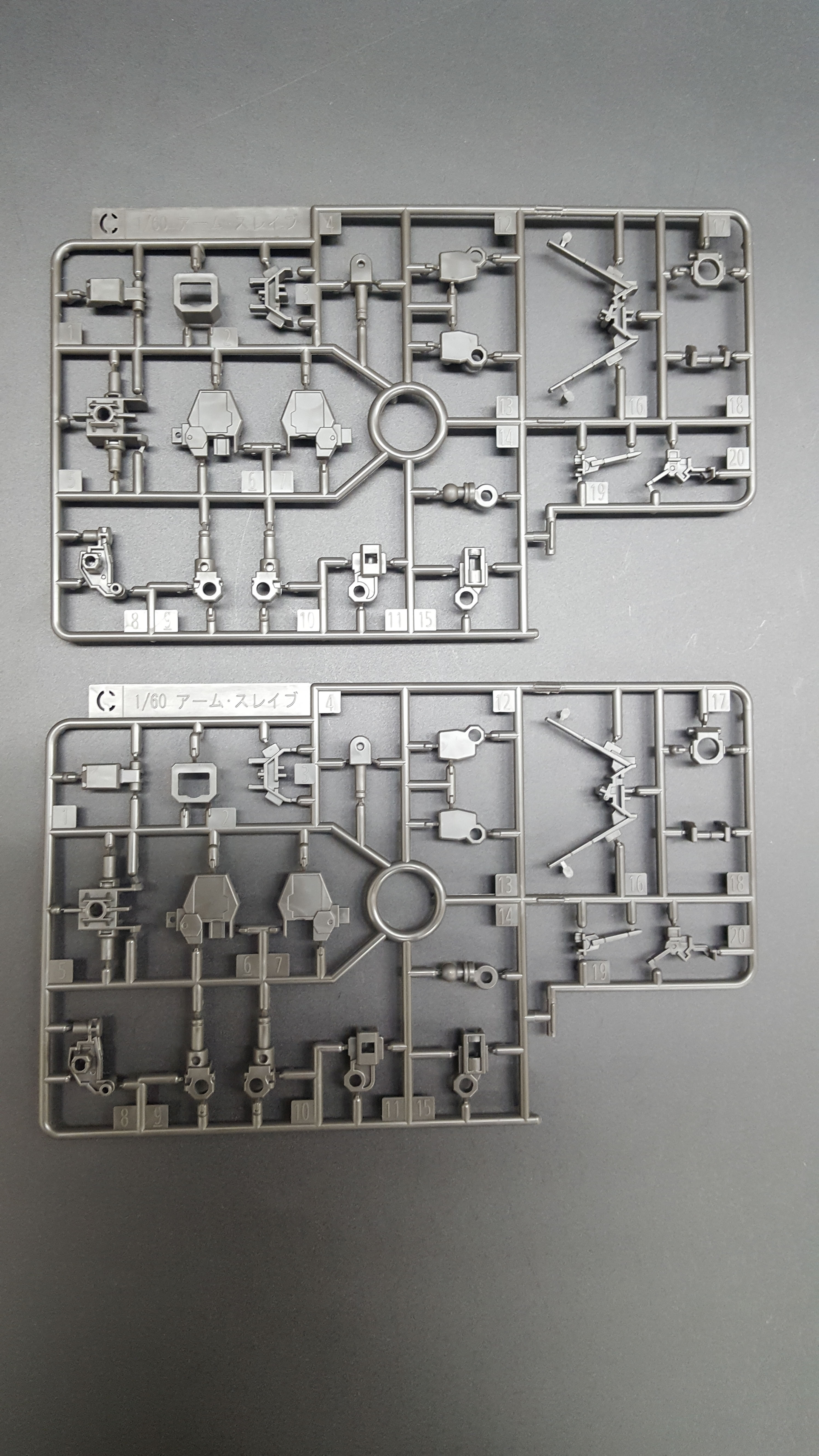 Again, we have two identical runners on C, this time in gunmetal with something of a metallic sheen to it. These are looking mostly like joints and inner parts that you probably won’t see much of in the finished kit. 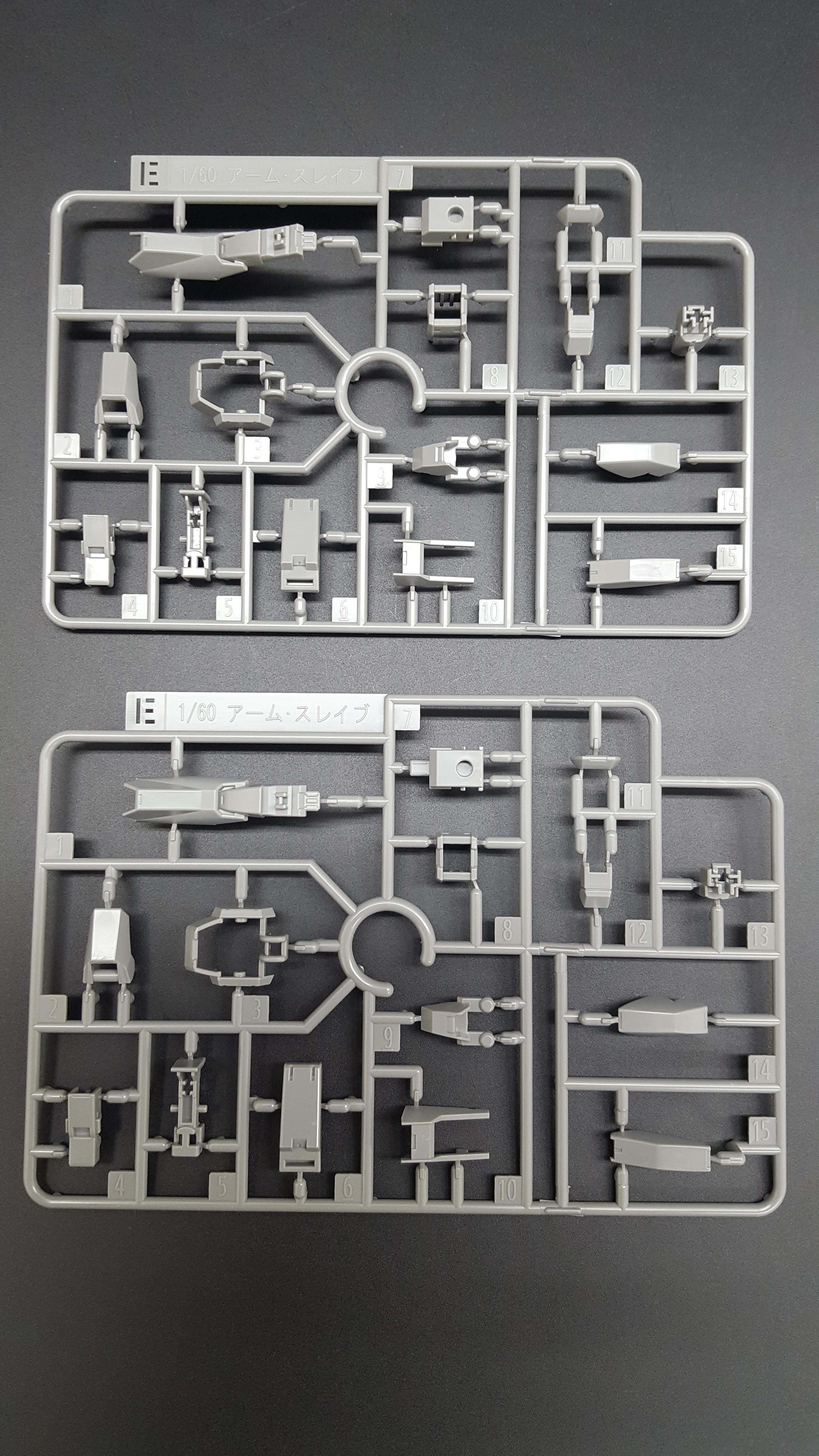 The E runners are another identical pair in grey. Those parts with sloped surfaces look like we’ve got some leg parts on these. 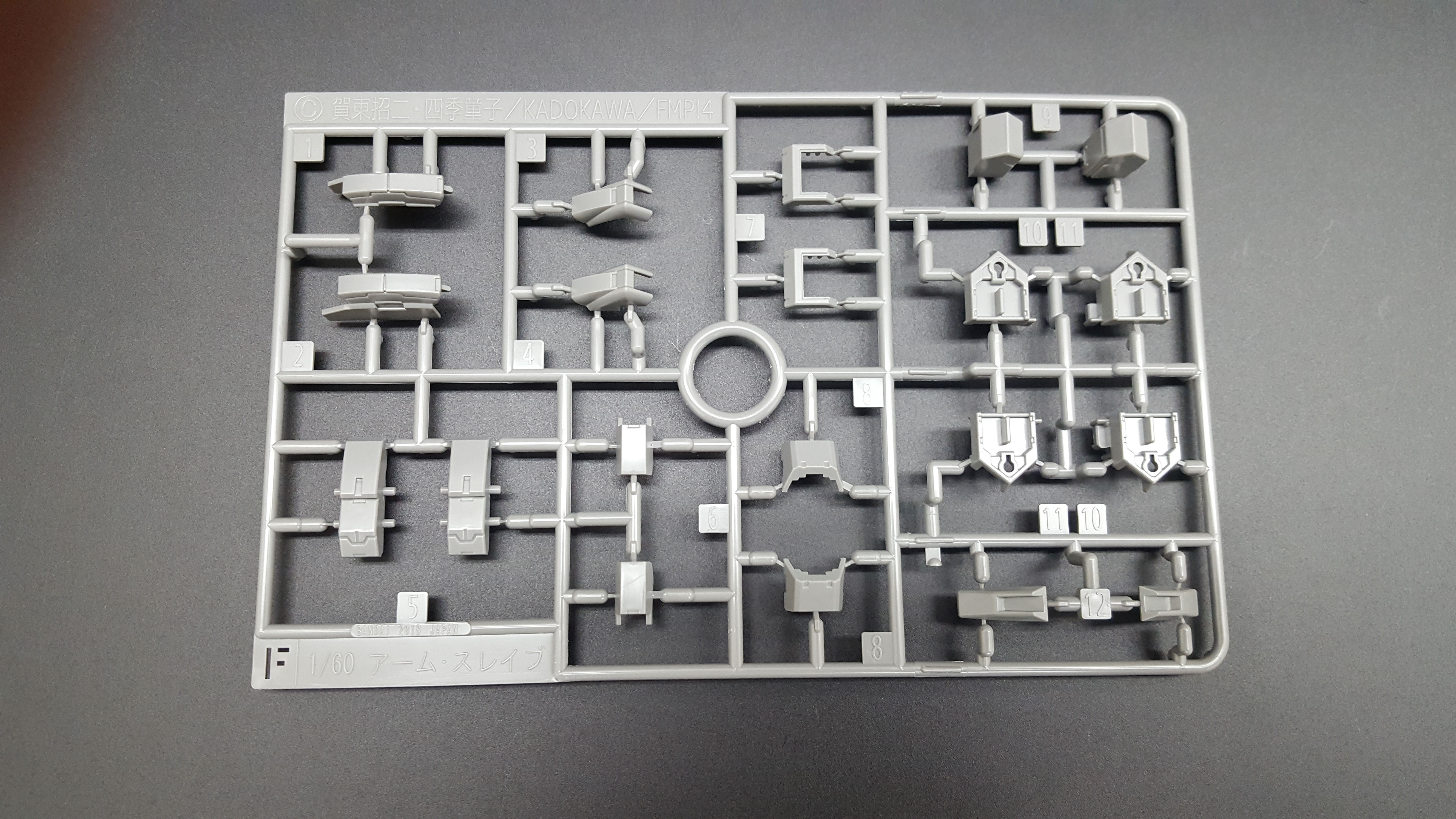 F is a small, lone runner in grey again. More leg parts, it appears, as most of these pieces are doubled up, too. 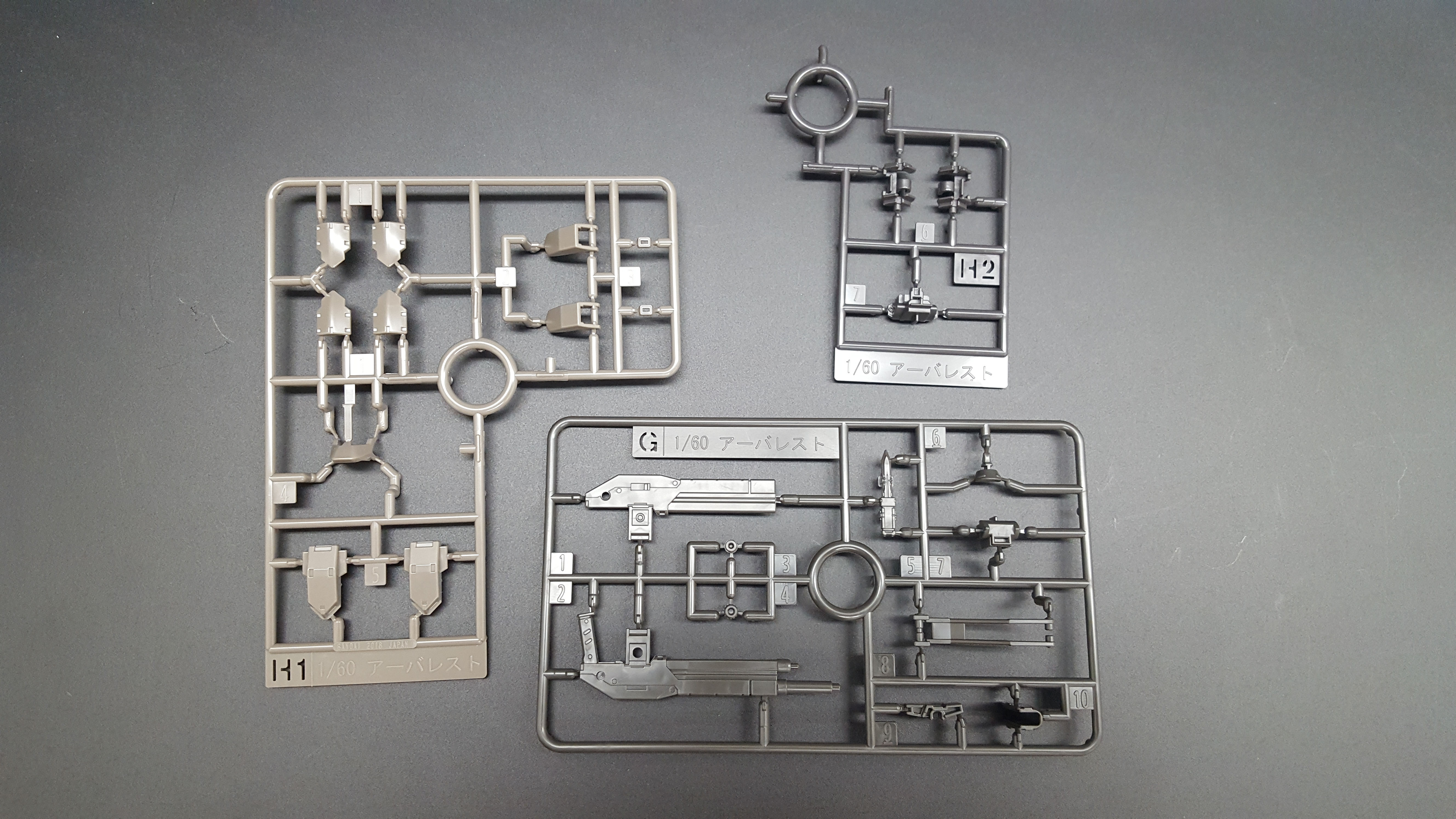 H1, H2, and G. They’re each in slightly different colors: light brown-grey, dark gunmetal, and gunmetal, respectively. The G runner has parts for the shot cannon, and the other two are mostly for small mechanical details. Here we go — this RB-1 runner has parts for the Booster: big ol’ wings. RB-3 runners have missile parts that are going to be part of the Booster, too. It’s safe to assume at this point that the RB runners are those for the Booster which have been introduced in this kit. RB-2 has body parts for the Booster and a cool little engine/thruster, too. ACB-5 (where are these runner names coming from…?) is molded in dark grey/gunmetal with something of a sheen. This is a really slick color for mechanical parts in my opinion! But these aren’t actually part of the model itself; they’re parts for the Action Base 5 that are going to enable all kinds of dynamic poses for your finished kit. And finally, the bottom of the action base is here, with foil stickers and polycaps. There are only a few stickers, so kit builders who aren’t keen on using those on their kits could probably easily paint in these details themselves. Also, the polycaps come in kind of a brownish gunmetal color, instead of Bandai’s standard dark grey that you see in Gundam kits, so I think that’s a nice change that suits this kit’s color scheme particularly well.

So, what do you think? If this new Arbalest has your attention, you can pick one up here!