In the world of rallying, there aren’t too many combinations that go together as well as Tommi Mäkinen and Mitsubishi. The iconic Japanese marque headed into the 1999 season with their #1 Finnish driver and Belgian, Freddy Loix, looking to secure the championship ahead of the Subaru Prodrive team. Tommi came out fighting in the Mitsubishi Lancer Evolution in its bright red Marlboro livery and went on to secure the championship by 7 points. The famous howl of the Lancer’s exhaust note coupled up with the anti-lag makes for a memorable combination.

Tamiya has recreated the S2TMR, which competed in the 1999 Rally of New Zealand and ultimately went on to win the event outright. Inside the kit are the decals to replicate either Tommi’s winning car or the #2 car driven by Freddy Loix coupled up to gravel suspension and wheels. There aren’t too many gravel kitsets out there so this one is a must build. 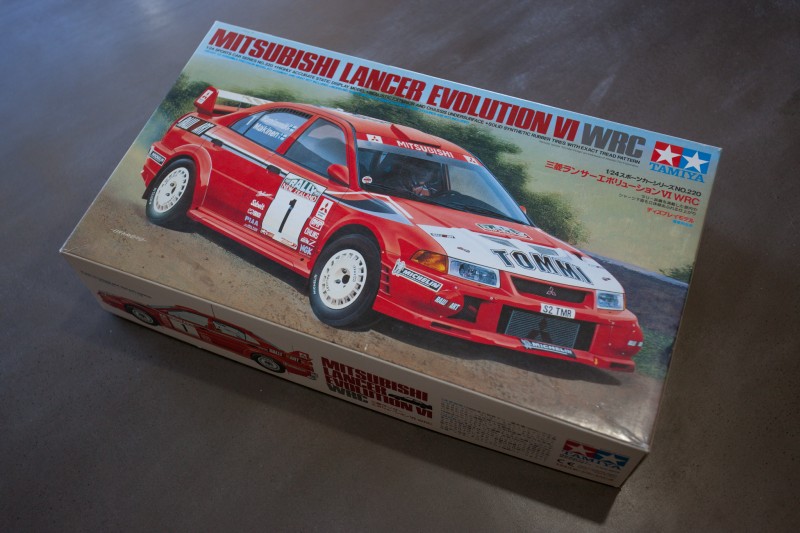 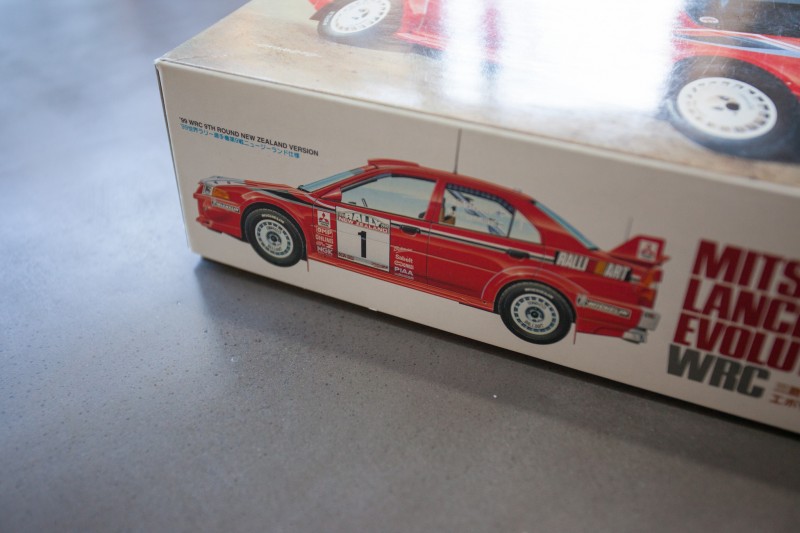 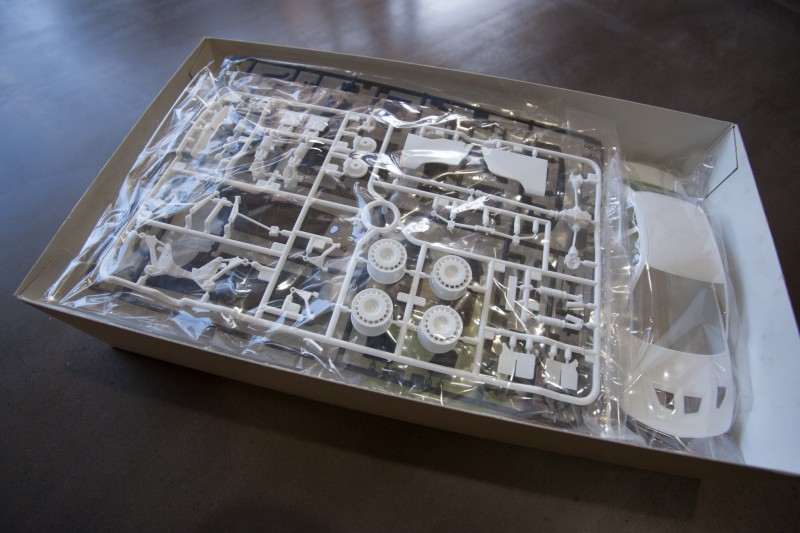 The kitset comes molded in white and black. The body is a 3-piece combination allowing for ease of construction. Included also are the tarmac suspension struts and wheels, should you wish to created this rally car in lowdown tarmac specifications. 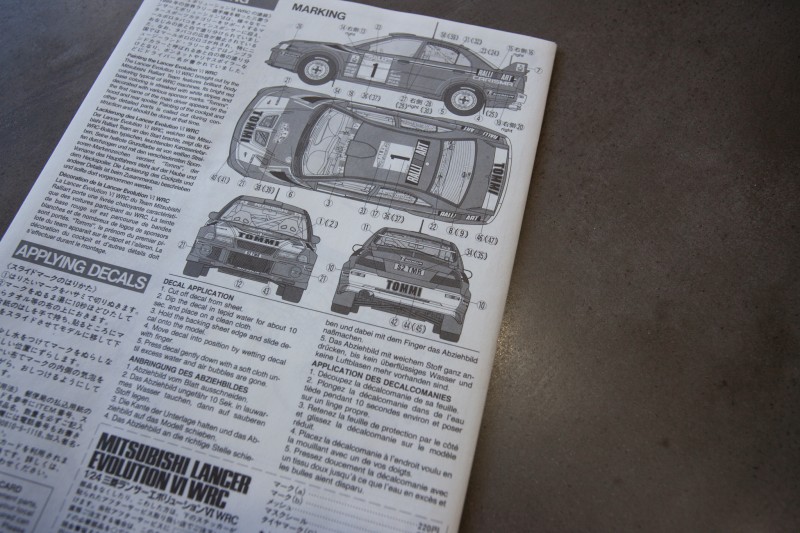 Superbly illustrated instructions give the full rundown for assembly and applying the livery to the car. In 1999, the Mitsubishi team was sponsored by Marlboro, although due to the tobacco advertising restrictions on certain events the advertising was replaced in the event with ‘TOMMI’ and ‘FREDDY’. This has been replicated exactly by Tamiya in the kitset. 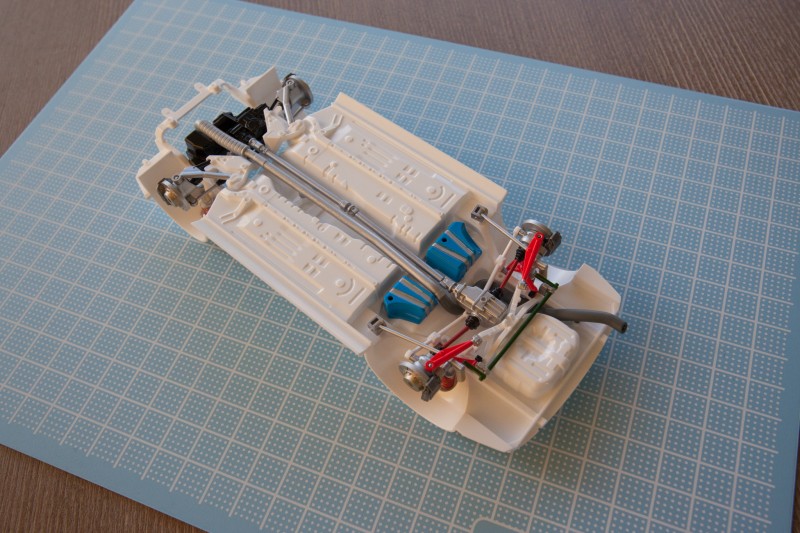 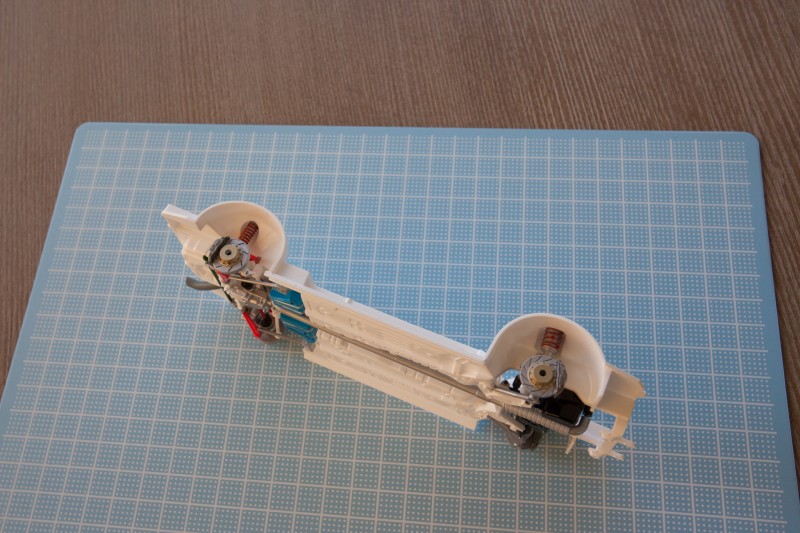 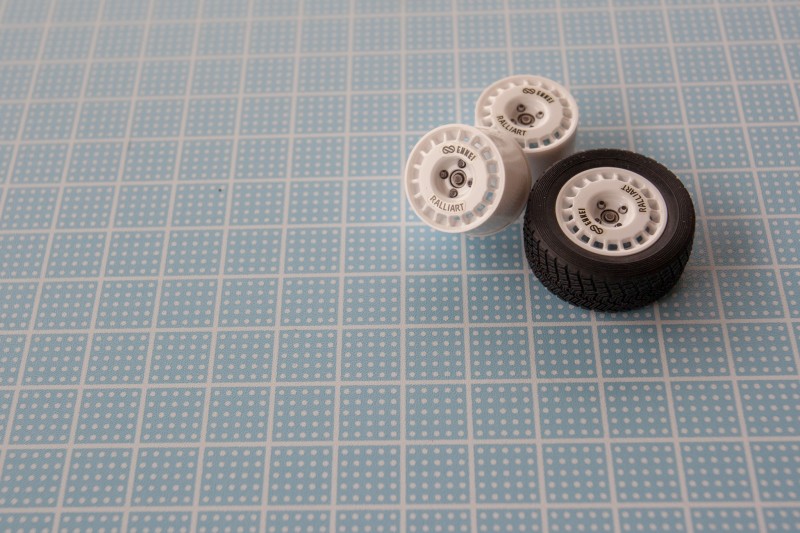 The underside of the Lancer is quite colorful, and this was to enhance the simplicity of servicing. Many components on the left side of the car were colored blue, while the right side was colored red. The fitment of the intricate suspension and drivetrain setup is superb and makes for a beautiful undercarriage. Short travel gravel suspension looks great with the extended springs. Wheels are nice, wide Enkei gravel rally rims coupled up with Michelin tires with a very authentic gravel pattern. 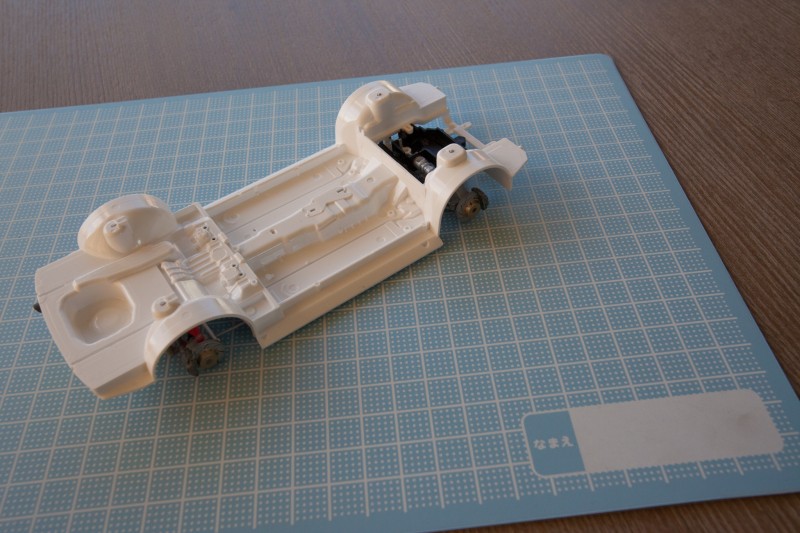 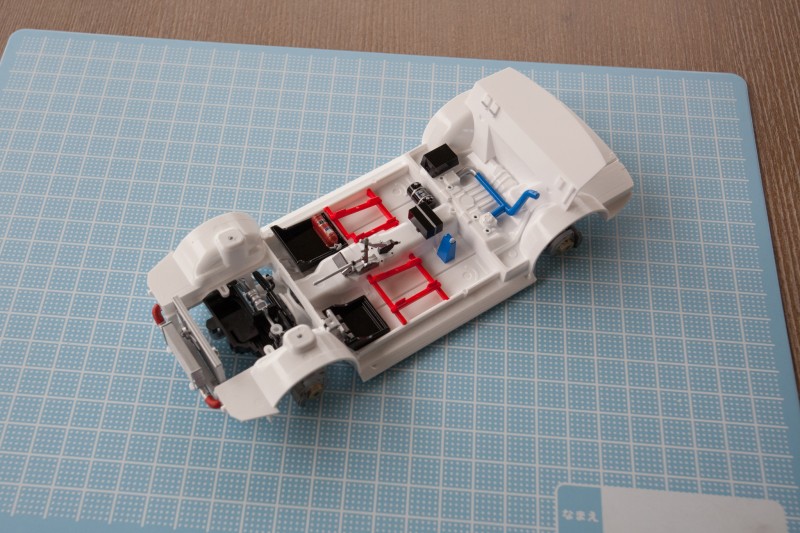 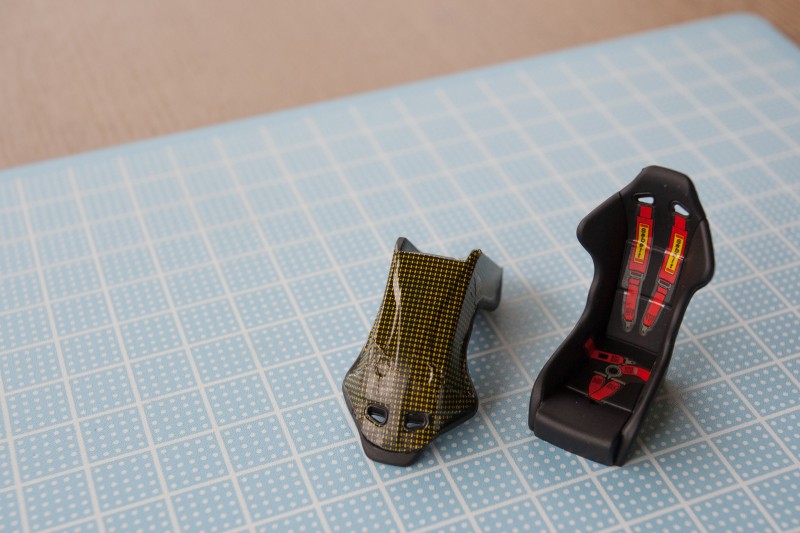 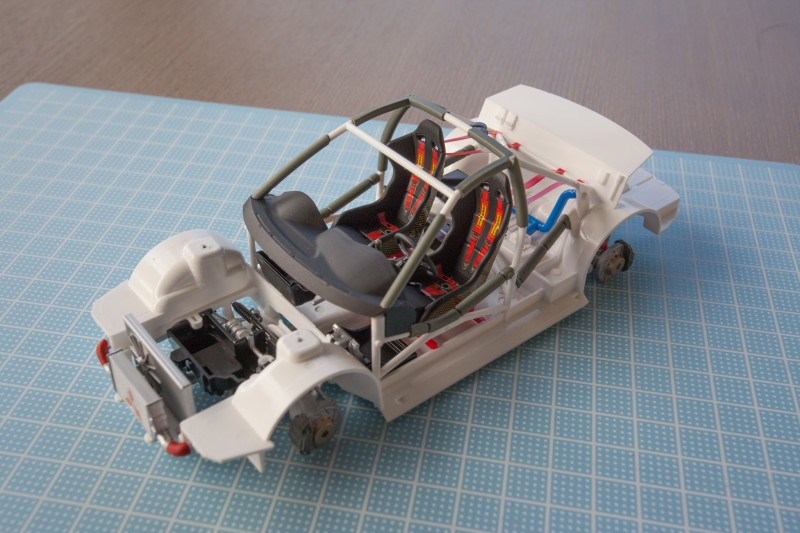 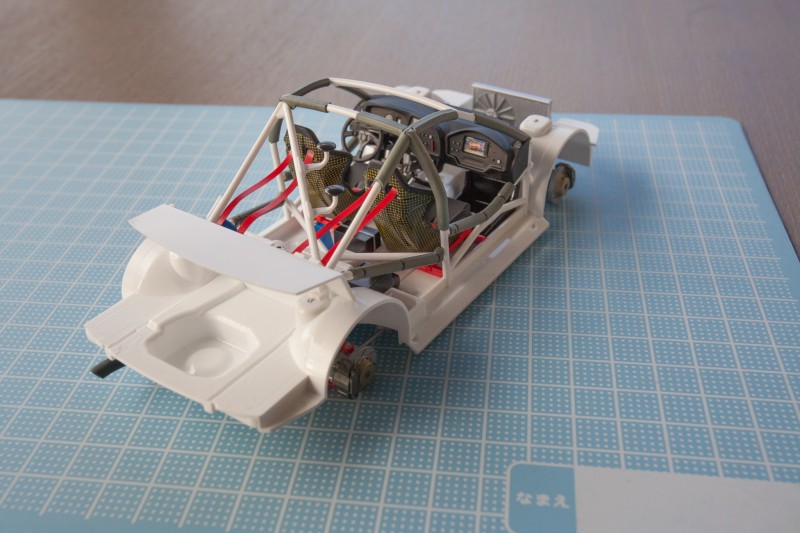 The office of the Lancer is a small but nicely detailed one. Bright red seat rails with blue and black in-car services brighten the cockpit right up. I used the kit-supplied decals for the seats and then added strips of red insulation tape to the back of the seats for the belts. The end result is quite good as they are very visible through the rear window. 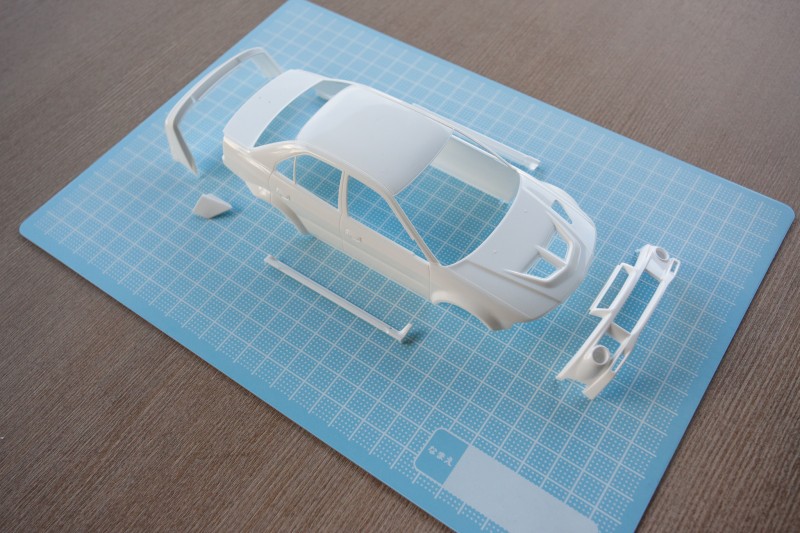 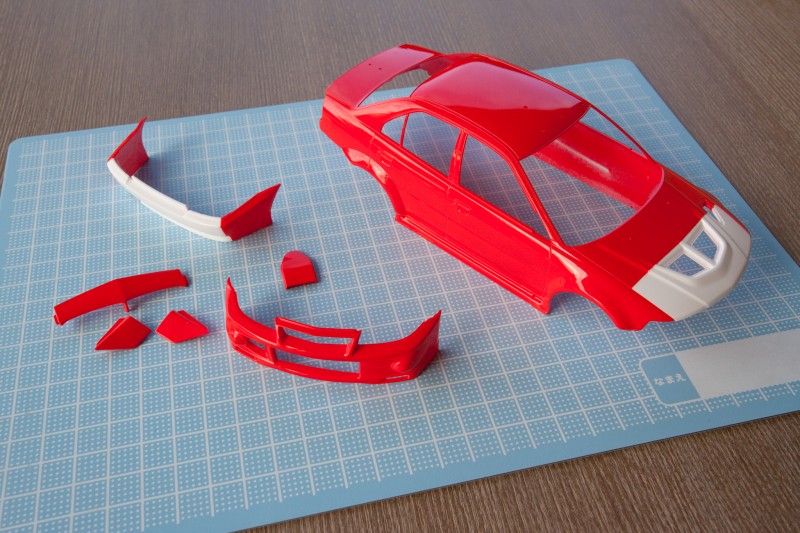 The kit is sprayed with Tamiya Spray TS-49. The rear quarters of the rear bumper have a decal supplied as well as the top of the hood. I elected to mask and spray these areas as the hue of the red on the decal and paint doesn’t match quite as well as I would like. The masking was very easy and the finished result came out very well. 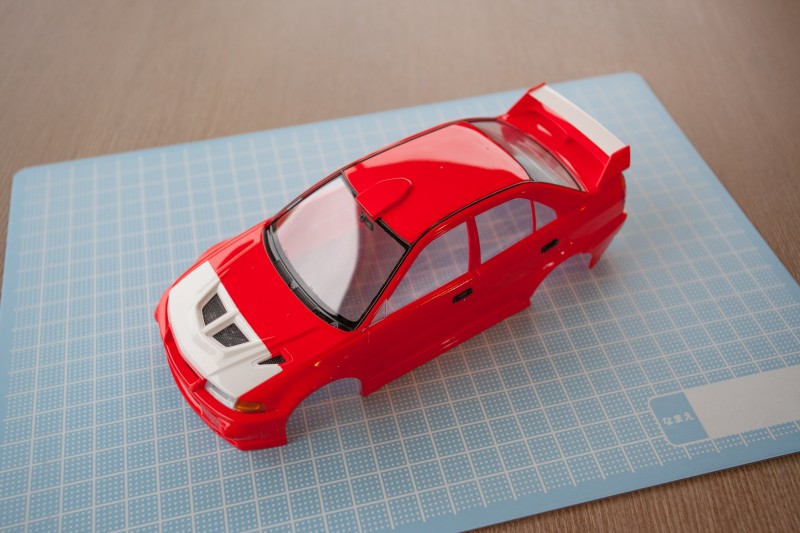 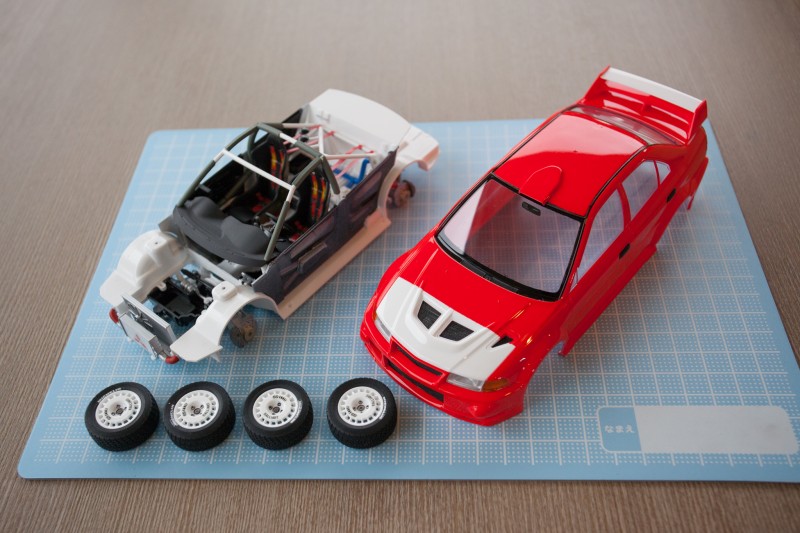 With bumpers attached and mesh fitted to the grills of the car, all the open areas are soon filled with detail. The windows have front and rear masks which make it nice and easy to spray the black surrounds. 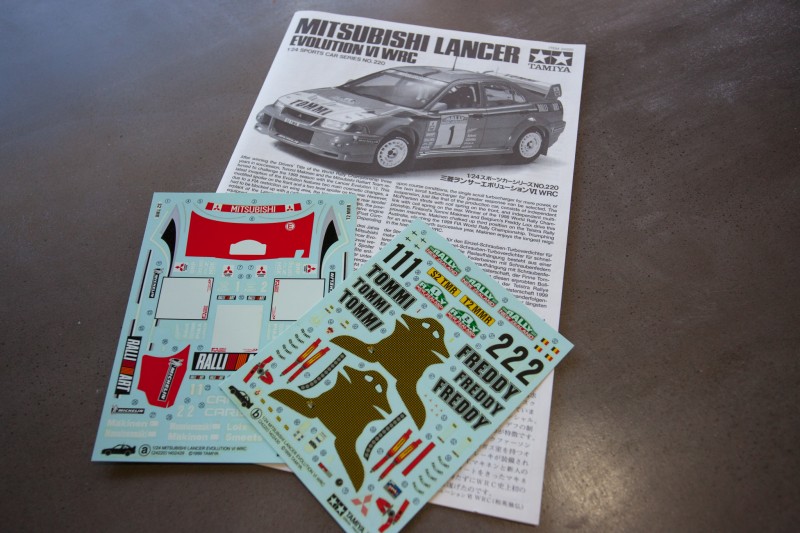 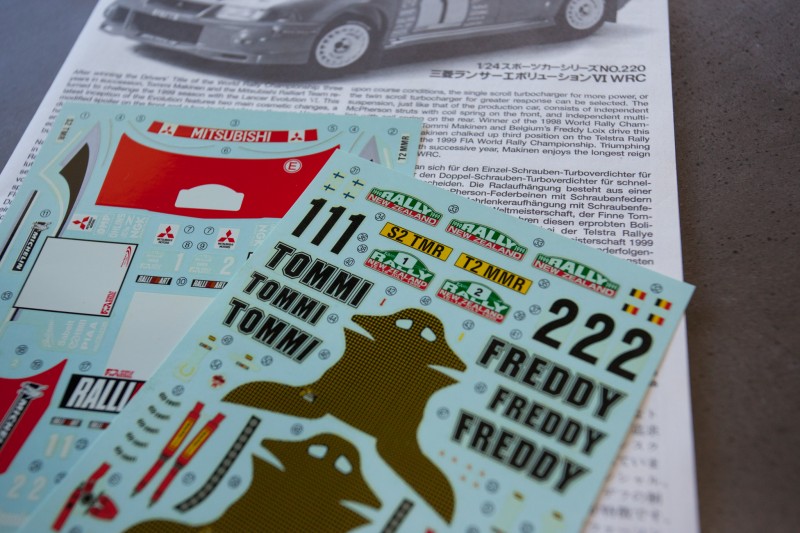 The quality of the livery is superb; finely-detailed decals really finish this rally car off perfectly. The white is nice and thick with such a bright and vibrant base color underneath, there is relatively no bleed through the white decal. Just be careful you apply the correct size ‘TOMMI’ or ‘FREDDY’ in the right spot on the car as there are three of them. 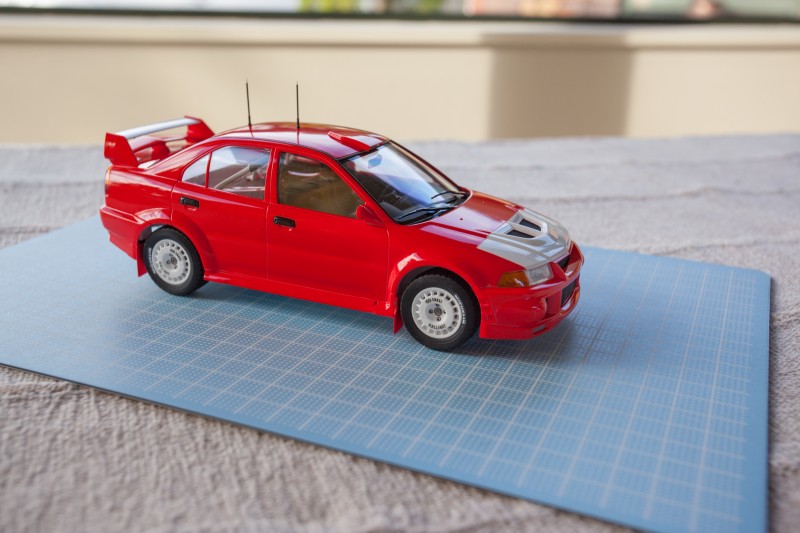 Without any livery at all, the car already looks good and this is how they were run in pre-season testing. 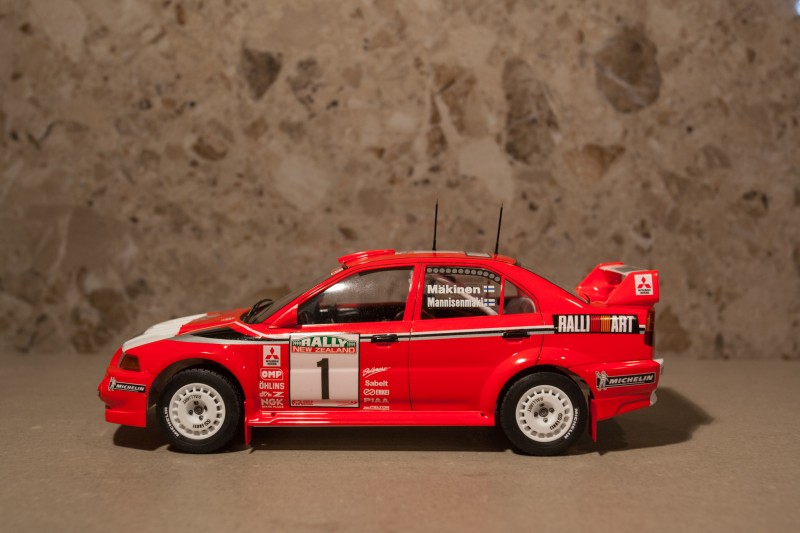 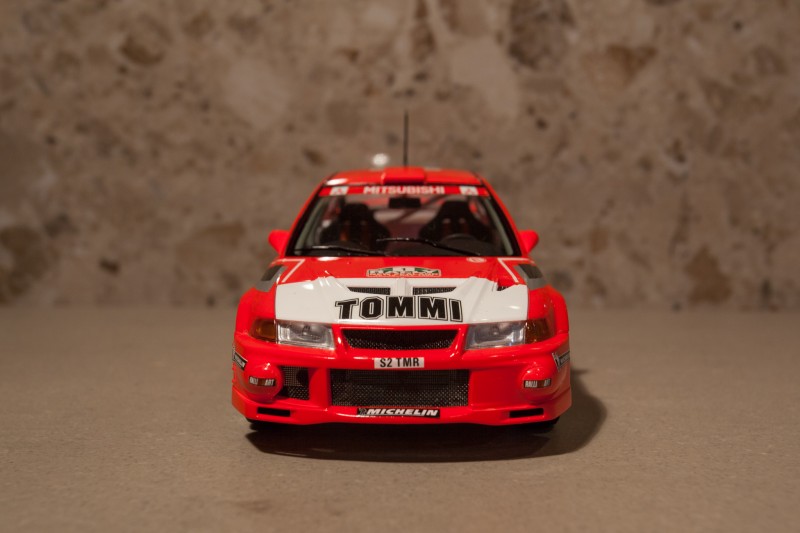 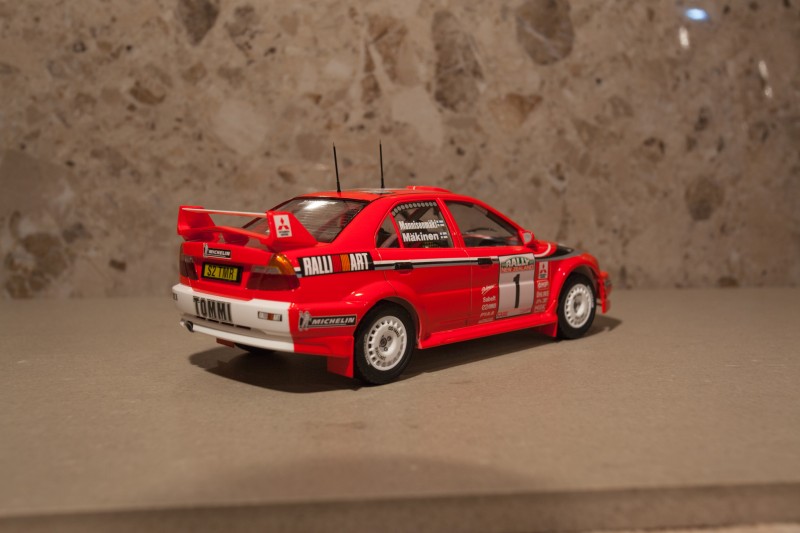 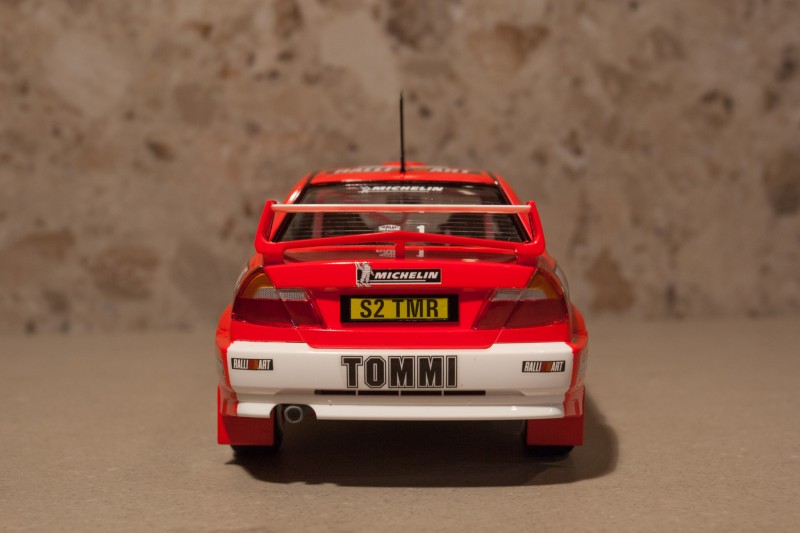 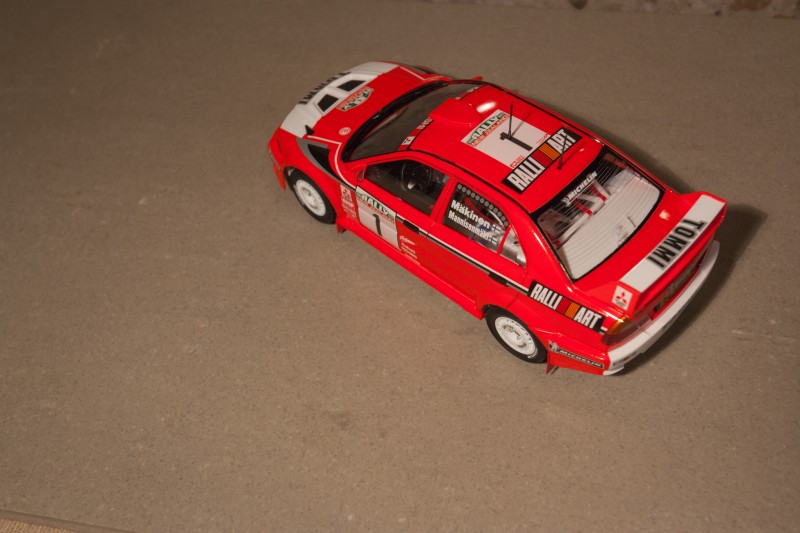 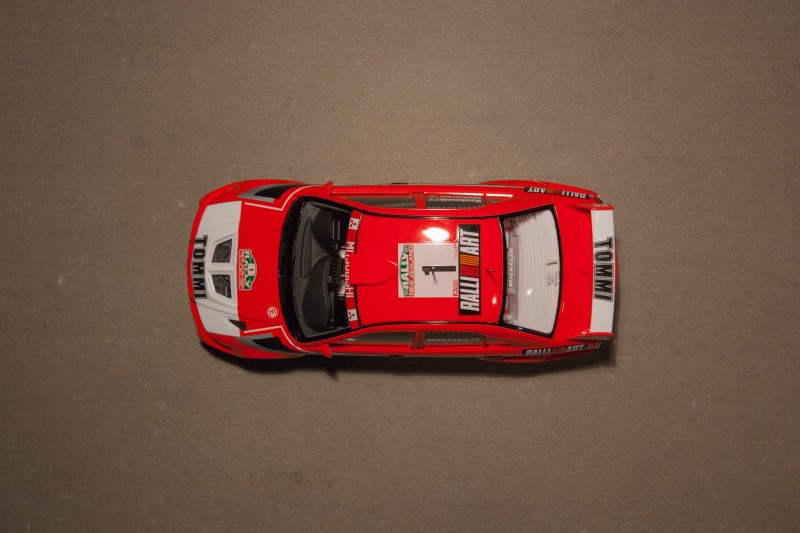 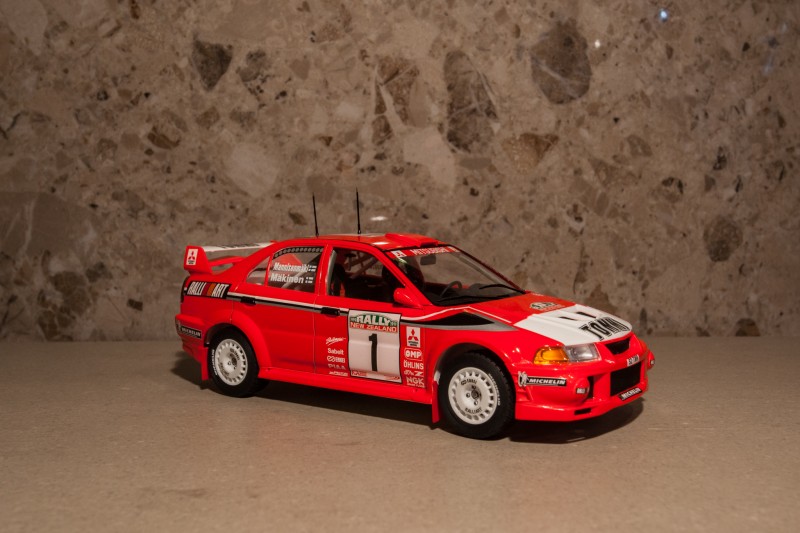 The final impression of this kit is a 9/10. A golden age of rallying where the best in the sport battled it out, and coupled up with a classic livery makes it a winner all round. Fitment is amazing, the decals are easy to deal with, and the stance of the car is just right. As a New Zealander I may just be a bit biased, but the proof is in the pudding, as they say!