Continuing the conventional design of the Ausf. C, the Ausf. F was designed as a reconnaissance tank and served in the same role as the earlier models. The superstructure front was made from a single piece armor plate with a redesigned visor. Also a dummy visor was placed next to it to reduce anti-tank rifle bullets hitting the real visor.

The hull was redesigned with a flat 35 mm plate on its front, and armor of the superstructure and turret were built up to 30 mm on the front with 15 mm to the sides and rear. There was some minor alteration of the suspension and a new commander’s copula as well. Weight was increased to 9.5 tons. 524 were built from March 1941 to December 1942 as the final major tank version of the Panzer II series.

If you love little tanks like this in the new 1/24 scale, then you will be happy to hear that Tasca has followed up on their surprise release of a 1/24-scale Panzer II Ausf.F with this Afrika Korps version of the same vehicle. Features the same great detail, indy-link tracks with metal pins, and photo-etched metal parts as the previous release. 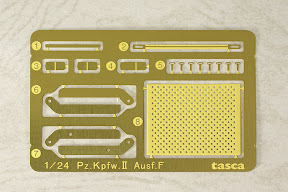 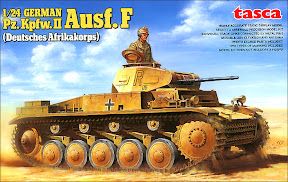 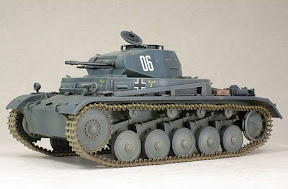