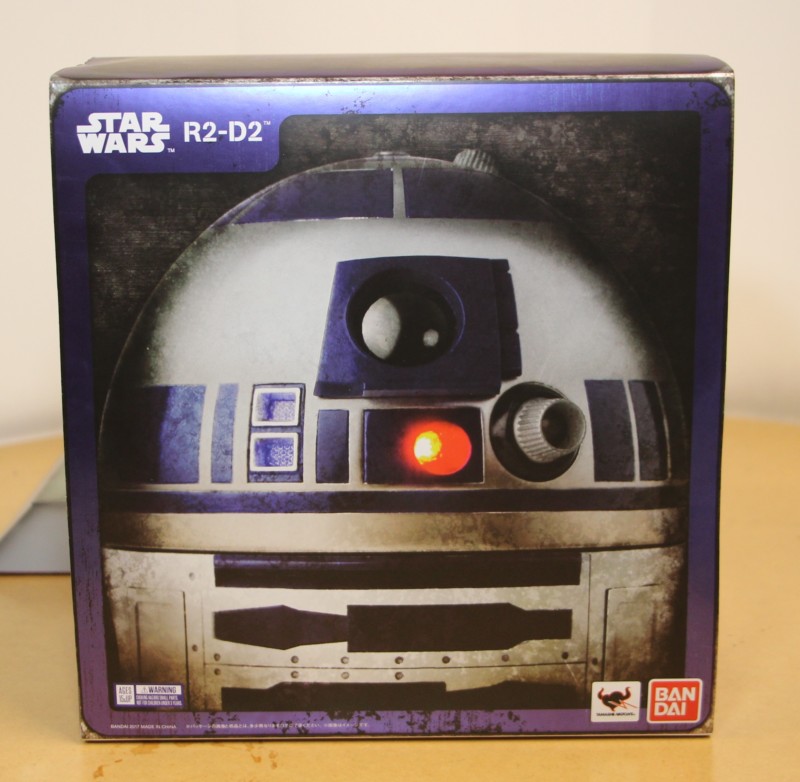 In 1977, amid all the whirl and rush of media and fan attention which surrounded *THE* game changing film of that year, decade, and arguable century (to a certain demographic anyway), there was one little thing which stood out, from beginning to end. Whilst some adored the old Falcon or the X-Wings, the TIE fighters, the Star Destroyers, the lightsabers, the Death Star, Han shooting first (‘Cos you know he did. Just like you know Spike is dead!) and all the other elements of that long ago time, in a far off galaxy, there was that happy-go lucky little pepper pot of a droid that everyone seemed to love: R2-D2

Well, not everyone loved him, but they won’t be thinking about buying this toy, so we can quietly pretend they don’t exist.

Making a Silk Purse from a Sow’s Ear

When George Lucas was putting together the elements of the Star Wars universe he was mining the work of many – from Joseph Campbell to Kurosawa Akira – and attempting to assemble what might be called a future ‘bildungsroman’ (a German term for a coming of age tale of a sort), which needed a variety of elements. Not only did it need the POV character whose growth, and change made the film(s) work, in Luke Skywalker, but also a number of other contrasting figures from which said youth could learn.

We have, of course the wise counsel of Obi-Wan Kenobi, the reckless heroic-greed of Han Solo and Chewbacca, the dedication and bravery of Leia Organa and the equally determined, but ruthless Imperial agents, best personified by Darth Vader.

So far so good.

However, as Homer (the poet, not nuclear safety inspector) would tell you, even the most tragic of tales, written for the most dour of Athens’ City Dionysia, needed some lighter characters whose – often incalculably insane – antics would bring relief from the tension of the main plot, and act as turning points for the other characters: as it is often the insights of ‘fools’ within such narratives that reveal the folly of the wise and help direct the hero back to the correct path.

In the case of Star Wars, Lucas chose robots – his ‘droids’ – to represent these comic agents.

As I have written elsewhere on hobbylink.tv, the characters of C-3PO and R2-D2 were primarily based on characters created by Akira Kurosawa to provide light relief and exposition in his 1958 film, The Hidden Fortress. Indeed, many elements of that film were lifted to provide central narrative points for the first Star Wars film: from the princess in danger, the old warrior who becomes her guide and the titular hidden fortress itself. Just as The Hidden Fortress is told from the point of view of the peasants Tahei and Matashichi, Star Wars might also be be said to be a film about Threepio and Artoo, in as much as they are the first traditional POV characters to which the audience is introduced, and crucial in conveying the plot.

This called for characters who were, though very different from each other, immediately graspable by the audience and empathic in their performance.

The look as we know was grasped perfectly by the Star Wars design team, taking their cue from the work of Ralph McQuarrie. 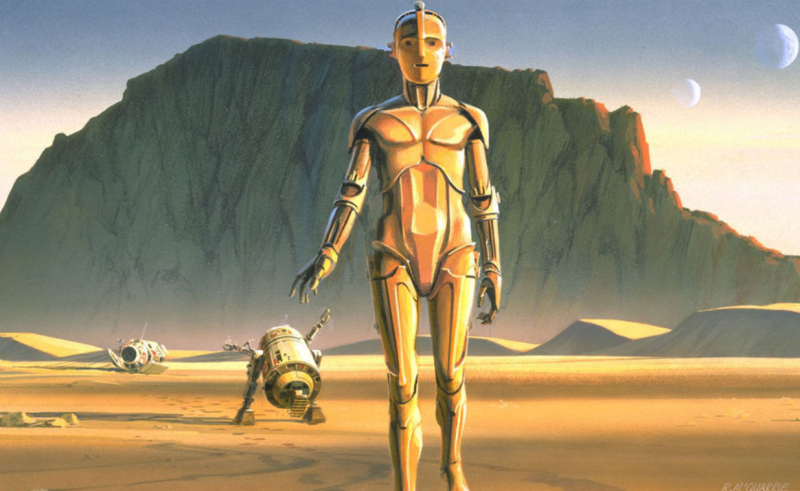 George Lucas tasked Ralph with many of the early concept illustrations for Star Wars. Though some of them fell by the wayside, such as the idea of the lightsaber being an everyday weapon in the story, the overall visual style he brought to the film remained – from the malevolent samurai that is Vader himself, right down to the odd couple of Artoo and Threepio. In the view of many fans, as this picture above attests, McQuarrie’s work has a sort of well worn feel to it, as if the universe which he was creating in his mind was well established, ‘grown up,’ and perhaps even a little battered ’round the edges. Like Syd Mead, another great visual futurist, Ralph had the knack of making the future look like the past, and this helped Lucas’ team of model makers and designers really set the tone for the film.

Especially when it came to the droid characters.

Those of you who deride BB8 for his odd appearance might be surprised to know that one of McQuarrie’s early concepts for R2-D2 was based on being a head on a large ball-bearing, trundling along happily enough, as this excerpt from Star Wars insider demonstrates. 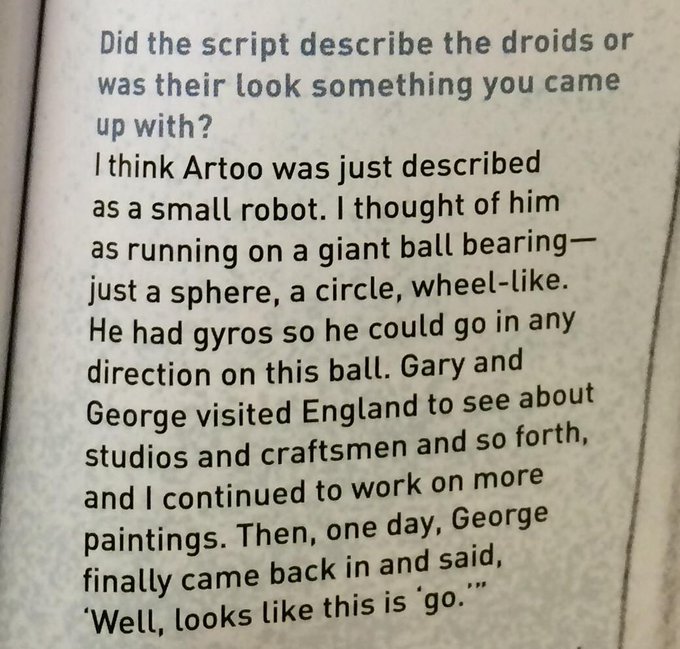 However, the technology of the time did not allow for such things. Indeed, it barely allowed for the droid we actually got (hence why Kenny Baker was shoehorned into a version of the little droid suit – there were both RC and costume versions – for scenes when Artoo was required to emote more). More on that in part two of this review.

Here is an interesting little snippet, though, before we get to the unboxing.

I throw it out as a fan-meme, as I have heard it circulating for years, and if any fan has any evidence to substantiate – or refute – it, please feel free to comment. I am dying to know the truth myself:

Essentially, the tale goes that R2-D2 stands for “Reel Two, Dialogue Two” and goes back to terms used in film making to mark point in the celluloid at which events happen. I’m sure that I heard this from the mouth of Lucas himself when watching a documentary about the Empire Strike Back.

However, I am also certain that, when I went to see Return of the Jedi for the first time, I could have sworn there was a small scene in which Luke was putting the finishing touches to a lightsaber in a cave on Tatooine before heading to Jabba’s palace.

I know the scene exists, but there is no way I could have seen it at the Sheffield Gaumont in June, 1983.

The tricks the mind plays on one…

Speaking of the mind playing tricks, one thing which puzzled me right off the bat with this toy was the presence of tiny indentations in Artoo’s paneling. I’d not seen them on other 1/6 scale toys, and felt it was odd that Bandai would make such a blunder. Indeed scratching the surface further brought up quite a furor over the matter…

However, a note by Roger Christian, the set designer on a New Hope indicated that the RC version of the prop did have riveted panels (unlike the Kenny suit, and the props for later films), and a quick view my my Blu Rays, bore this out.

Strange, though, as this toy also has the leg tubes which were integral to the Kenny Baker outfit… I suppose it was a case of a compromise being made one way or the other. I note though that the dents are far more pronounced on the toy than they are on the screen prop.

The Box is an interesting little affair. All battered and rusty. Very apt, even though the Astromech droid inside is far from weatherbeaten.

A very heavy and sturdy toy this, and about as far from other figures as can be imagined.

I will leave detailed descriptions of the electronics and other features to part two, save for the fact that whilst I am impressed with Artoo off the bat, I am surprised Bandai has not scheduled a re-release of Threepio to go with him (as, I think, the Snooty protocol droid chogokin release was back in 2013, and few remain now on the secondary market at a price sane enough for me to consider).

Come on Bandai! No sense in putting out this little charmer, if we can’t have Golden Rod to go with him!