Where are the Days That have been?

As I have written elsewhere: In the sequel to Space Battleship Yamato 2199, the Andromeda class ships represent the way in which the United Nations Cosmo Force has assimilated the technology provided by Starsha to restore the Earth into an uprated and upgunned version of the Yamato itself.

This is a major issue for the woman who sacrificed herself and her kind to bring what she saw as peaceful technology to heal Earth, as well as assist in repairing the mistakes that led to the first Earth/Gamilas war. Indeed, when handing over the technology to the Yamato’s crew in 2199, she was promised by Captain Okita that, though the Wave Motion cannon had saved the old ship from destruction, it would never again be used – being a step too far (and a clear allegory for the nuclear weapons of our own time).

However, the UNCF do not seem to be holding the promises of a dead Captain as sacred, and by 2202, Okita’s words are lost to the Cosmos, the Yamato crew are in a state of ennui, and the seemingly-peaceful Earth is on a war footing, with ships like the Andromeda flouting the ban on Wave Motion technology with little regard to the consequences.

This series promises to be more melancholic than the predecessor, and even after viewing the first movie one gets the impression that the writers are incorporating even more of this age’s sociopolitical tensions into the narrative, to further the original sequel’s Cold War escalation aesthetic.

This is more apparent (as the trailer above hints) at the way in which the crew of the old Yamato have drifted apart and lost much of their former hope.

Each one lost in their own past and the Earth’s rejection of Old Man Okita’s promise to Starsha, their collective feelings are reflected by the fact that the very ship which had saved the Earth lies abandoned in its decaying hangar in a state of confused dismantlement. 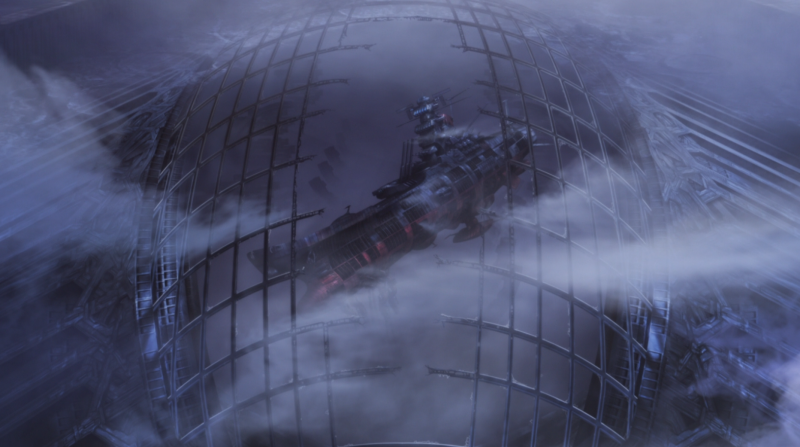 The implication is that, having returned home, the UNCF had not only taken the restoration technology to bring Earth back from the brink, but veritably plundered the Yamato for the base elements from which they would produce their new fleet of ships that would take Earth from the embattled target of an invasion brought about by a hideous mistake to being a galactic power in its own right. 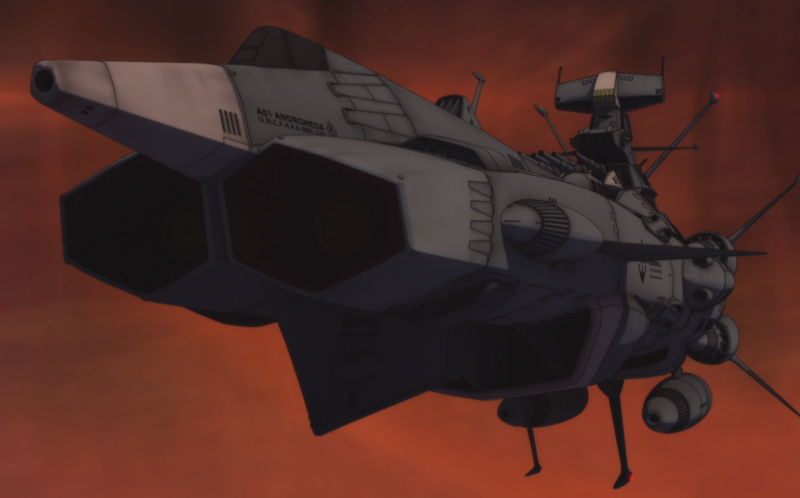 Though the Gamilas Empire is at peace with Earth, being allied with its former expansionist foes has allowed a certain form of Hawkish element to enter into the thinking of Earth’s UNCF, and, at the opening of the film have taken the fight to the series new foe, the Gatlantean Empire (however, as with 2199 it is ambiguous as to who fired the ‘first shot’, and why).

Again, mirroring the original series, in the first engagement even the combined Gamilan and Terran conventional fleets are outmatched when the Gatlanteans bring up one of their Super Heavy Dreadnoughts, which begins swatting even Gamilan Heavy Battleships like flies.

All seems lost till Andromeda arrives on the scene and, with a single volley from its twin Wave Motion Cannons wipes out the entire Gatlantean force – to the horror of Kodai, who is captaining his own cruiser. 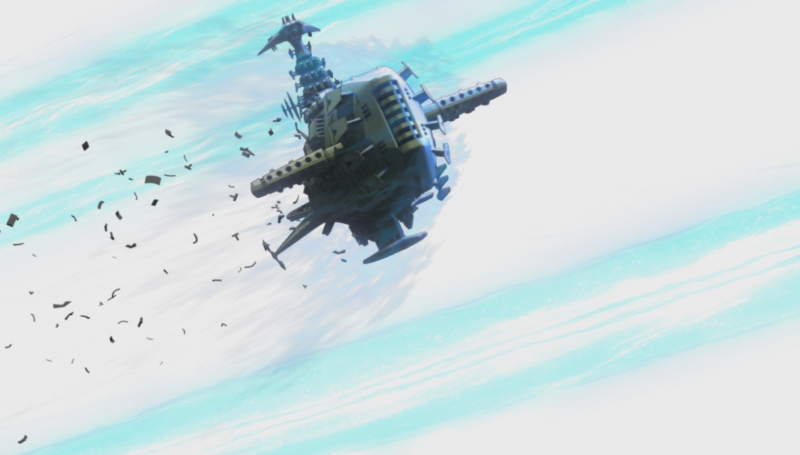 Though though the battle is won, and the Earth Command is content with its new ‘toy’, enough old faces, both Gamilan and Terran, are mortified by the revelation of the power of the Andromeda that they are stirred from their melancholy and inspired to do ‘something’…

And, in the truest Homeric tradition, it is at that moment of decision that each such person – excepting Yuki – receives a vision from the Shade of Starsha, who tells them that the Yamato is the only way to restore the dream in which they once believed.

Yes, I know there’s nothing here you have not seen before, but a chap can only pour out so many superlatives even on something he loves like his childhood…

Interesting… You will note the base runner contains a number of parts which seem to indicate interior details that imply either this was a lift from the older 2199 kit, or there is unlighted 2202 version in the works which will have the hangar bay installed. 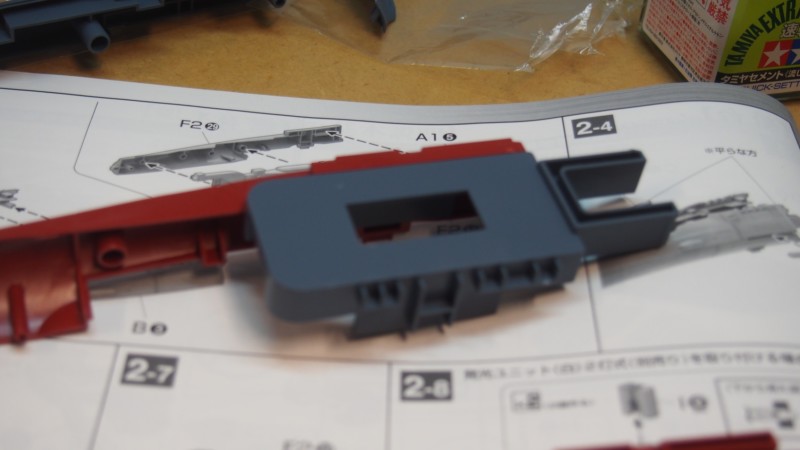 The Fore Lighting unit. A nice way to get the FX from amidships, where the unit can fit to the bow, where the emitter is. Easy to remove the LED unit, and does not leak light through the tight seams, as long as all it cemented as is should be. 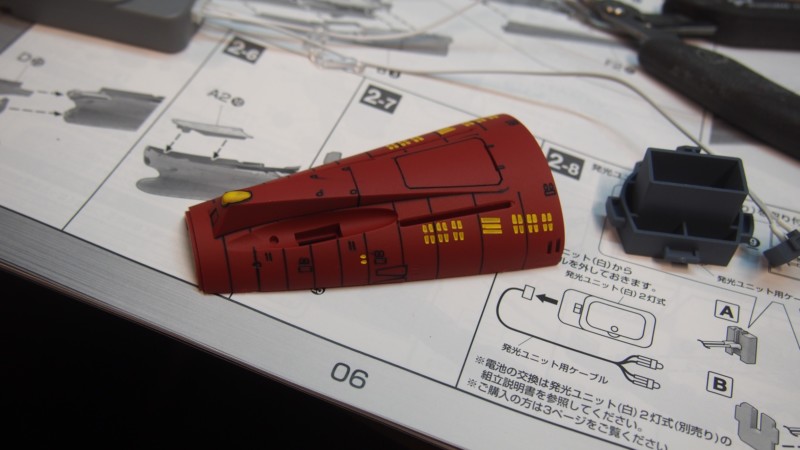 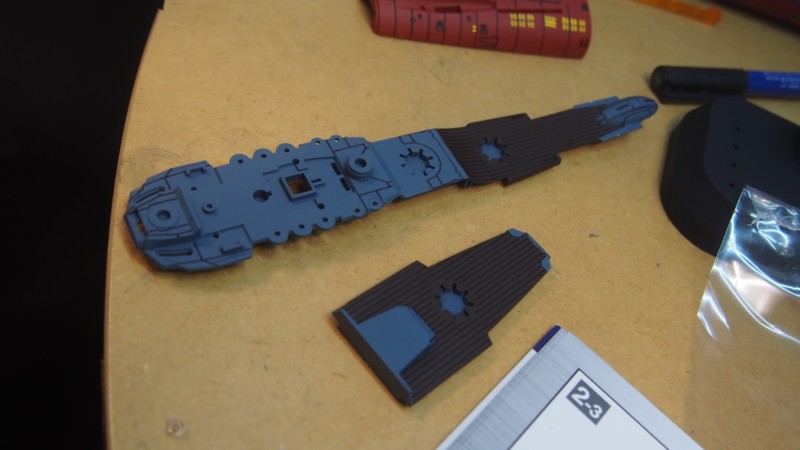 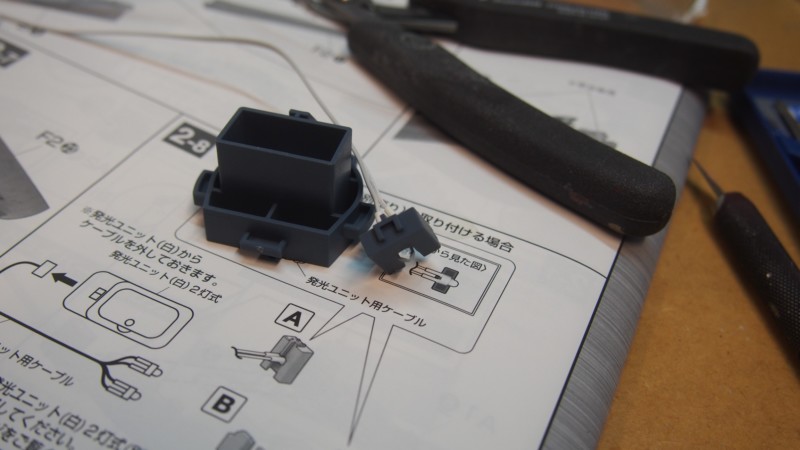 A real shame that the main engine light unit is not included in the kit. I see the reasoning, but am not convinced of it.

I certainly bought the kit, and I have seen a number of shops here (both in Kofu and Tokyo) offering deals which include the light box anyway. Can it have been so much harder for Bandai to have gone that one step further to complete success?

The same blue LED unit as powers the gun, lights the bridges. 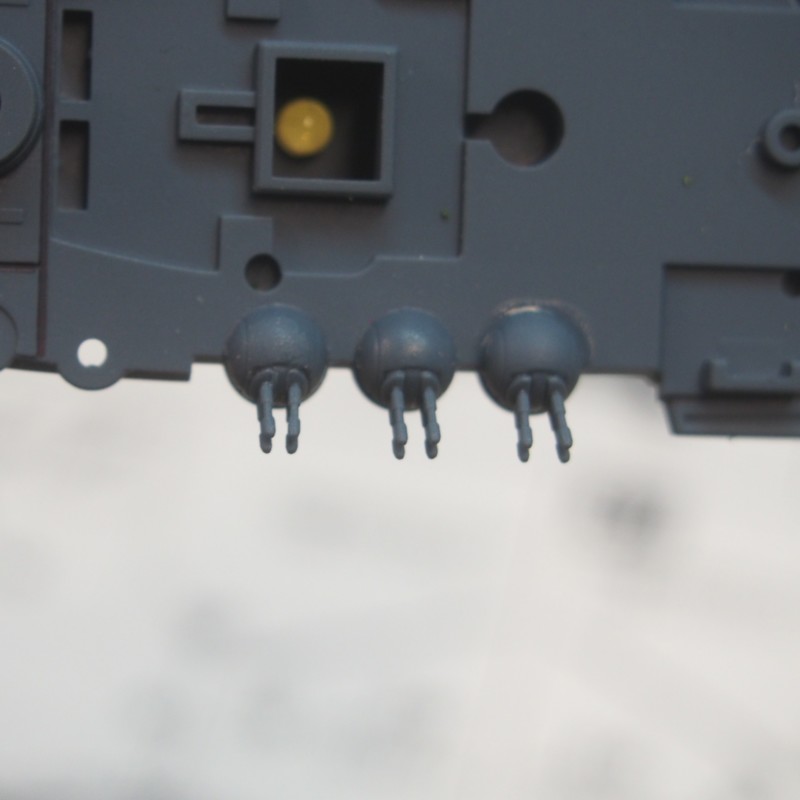 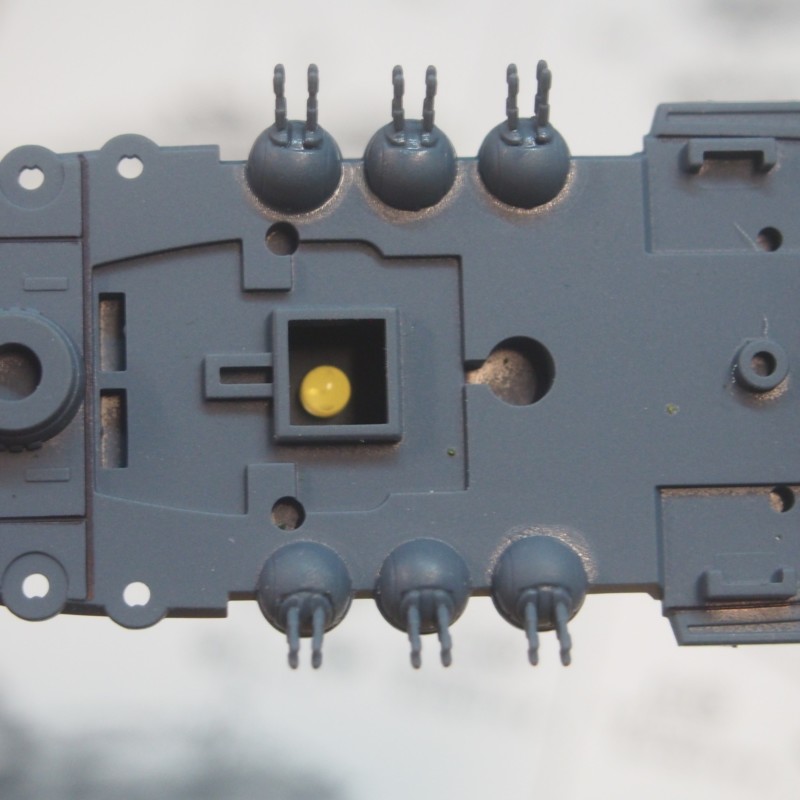 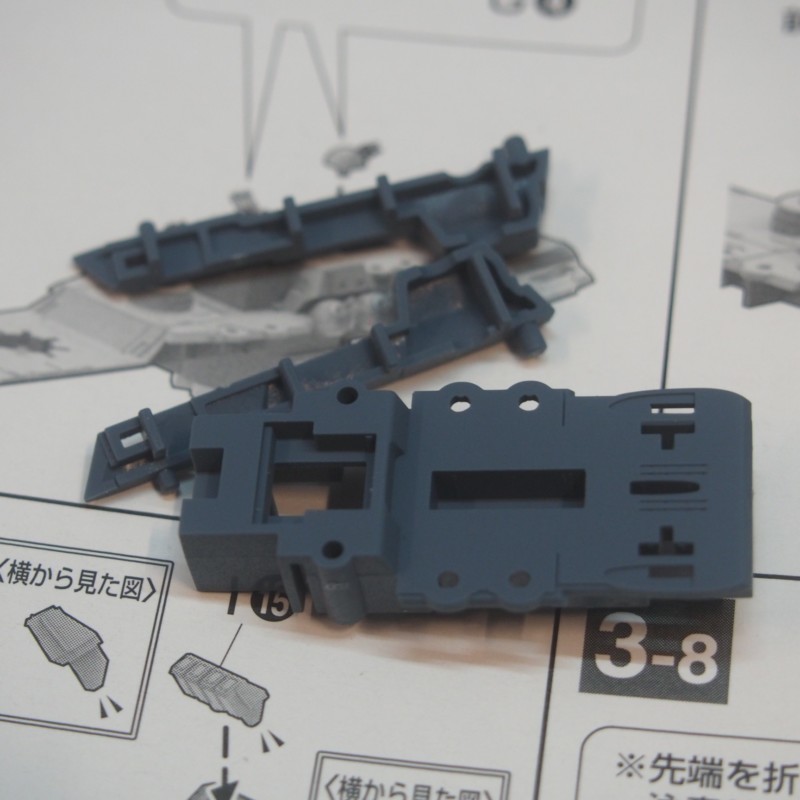 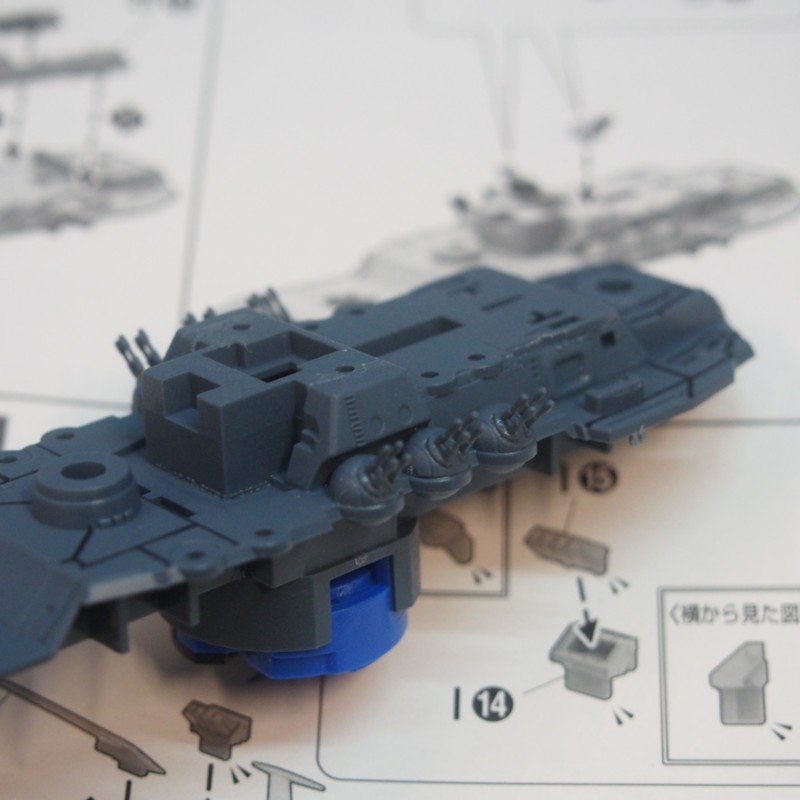 All those secondary guns… I sense trouble coming.

And here it is. To fit this element to the hull there is only one safe place to grasp – the ‘funnel’. Anywhere else and your poor AA guns with crumple like they were not even there. 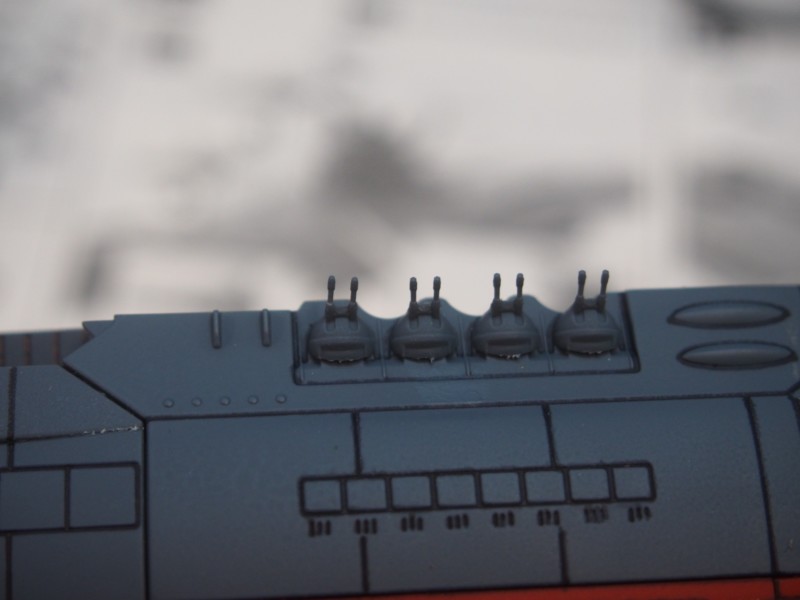 Apart from the obvious seam, where the upper deck meets the hull, this is a very clean little ship indeed. 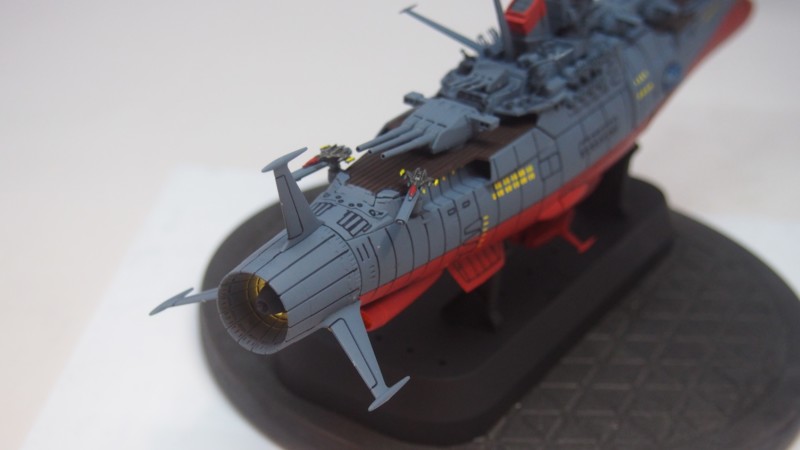 Only four fighters though? For shame, Bandai… For shame.

I am surprised that the Yamato did not deserve a sound module, as did the Andromeda ships (unless it is coming, as there is an unusual mount base part in the kit, the use of which is not explained properly in the instructions). However, the lighting options on this kit do give it just that edge. It is nice that the gun and bridge lights were included in the kit, but I still think it should have been all or nothing.