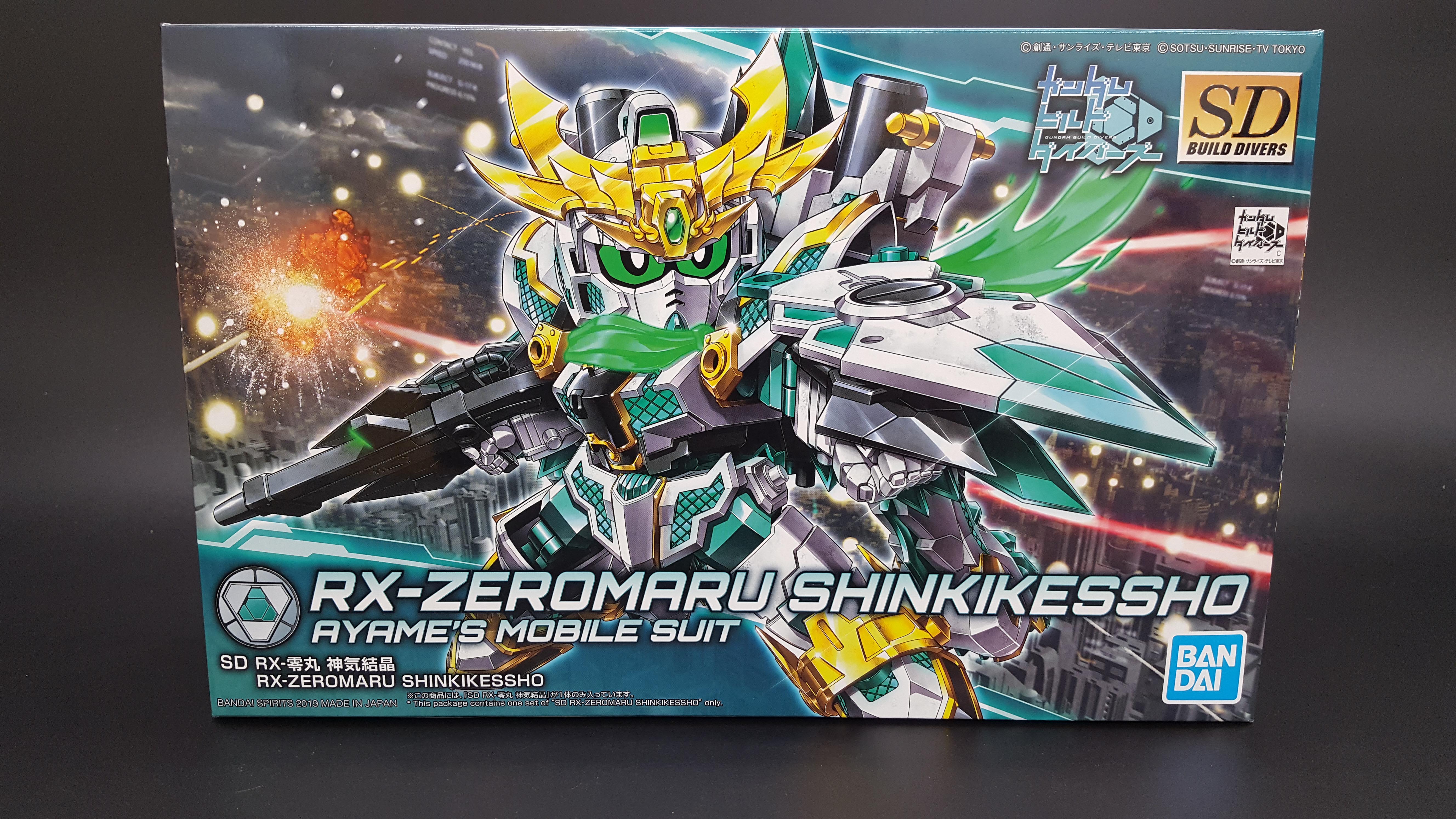 The latest SD has been flying off the shelves! (Thanks to preorders, really.) The SDBD RX-Zeromaru Shinkikessho is a mouthful honestly, but looks like a pretty cool kit. This little guy goes beyond the SD kits in the past: he’s bulky, in a good way, thanks to his Unicorn-like design that includes a whole lot of color (spoiler alert: it’s green) and a bunch of heavy armament.

For those of you who may not know, the Shinkikessho form is the second version of the Zeromaru, piloted by Ayame in Gundam Build Divers. That said, it’s a pretty new design that just showed up for the first time last September, and here it is already with its own kit!

How much can you pack into one SD? Let’s build divers in! 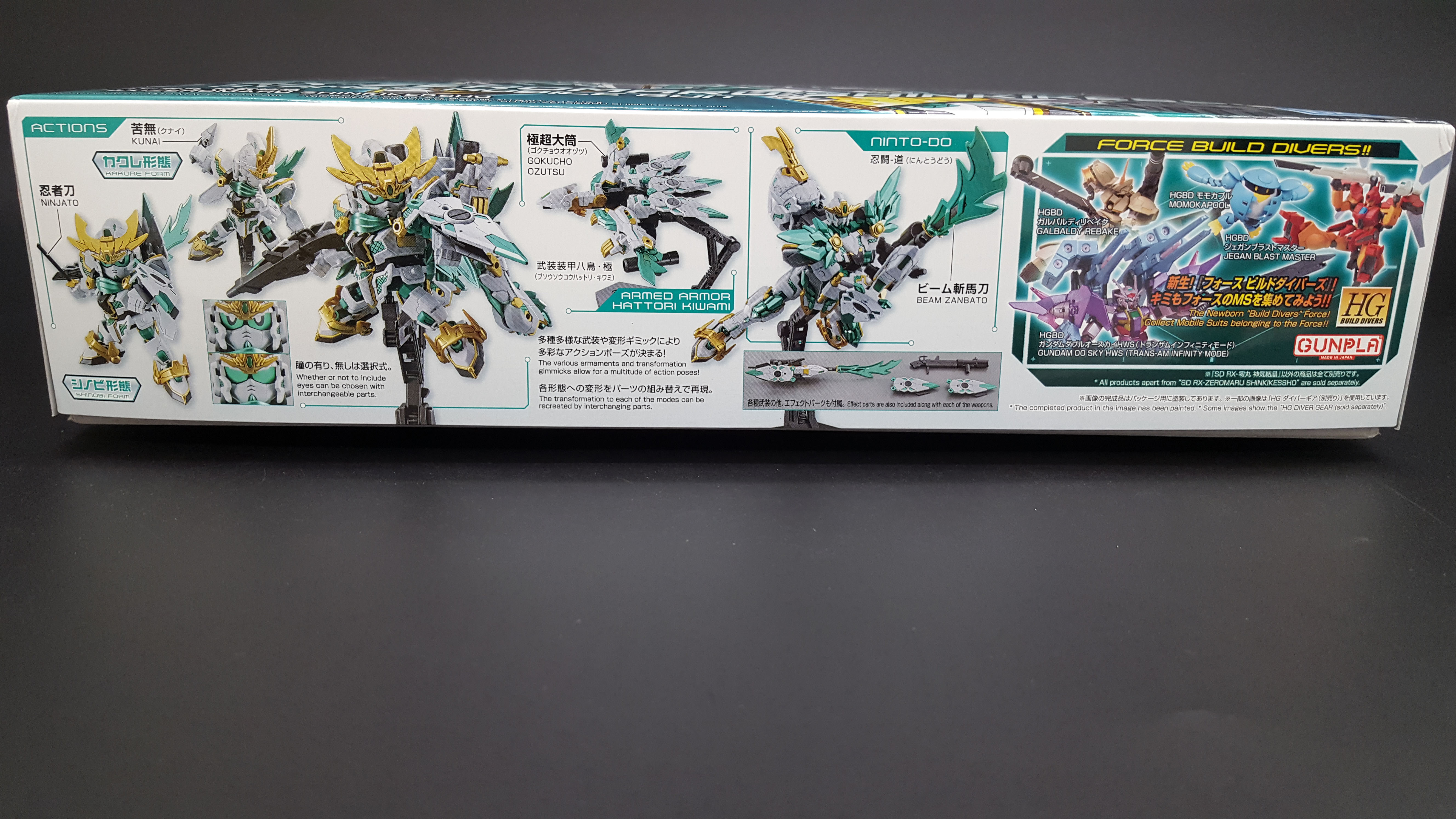 There are so many options here for such a small kit. First, Zeromaru can be displayed in regular Shinobi form or a slimmer, Kakure form with its face hidden. (For what it’s worth, “Kakure” means “hidden,” so there you go!)

If a lot of this is looking like the Unicorn Gundam, you’re not wrong; the Zeromaru’s design is generally based off that famous suit.

You also get to choose which style of eyes you want on the kit thanks to the stickers included.

For weapons, we’ve got a Ninjato, Kunai, and Gokucho Ozutsu — the latter of which is written in kanji that basically translates to “super special big pipes” as far as I can tell. You’re also getting parts for the birdlike “armed armor” (…really?) Hattori Kiwami, that looks a lot cooler than its excessive name.

Like previous kits, this one can also be configured in a sort-of-HG-kit fashion as shown on the box, too, and even includes extra weapons parts for that form. You won’t get the same quality here as a typical HG kit, but it works if you’re a fan of this form! 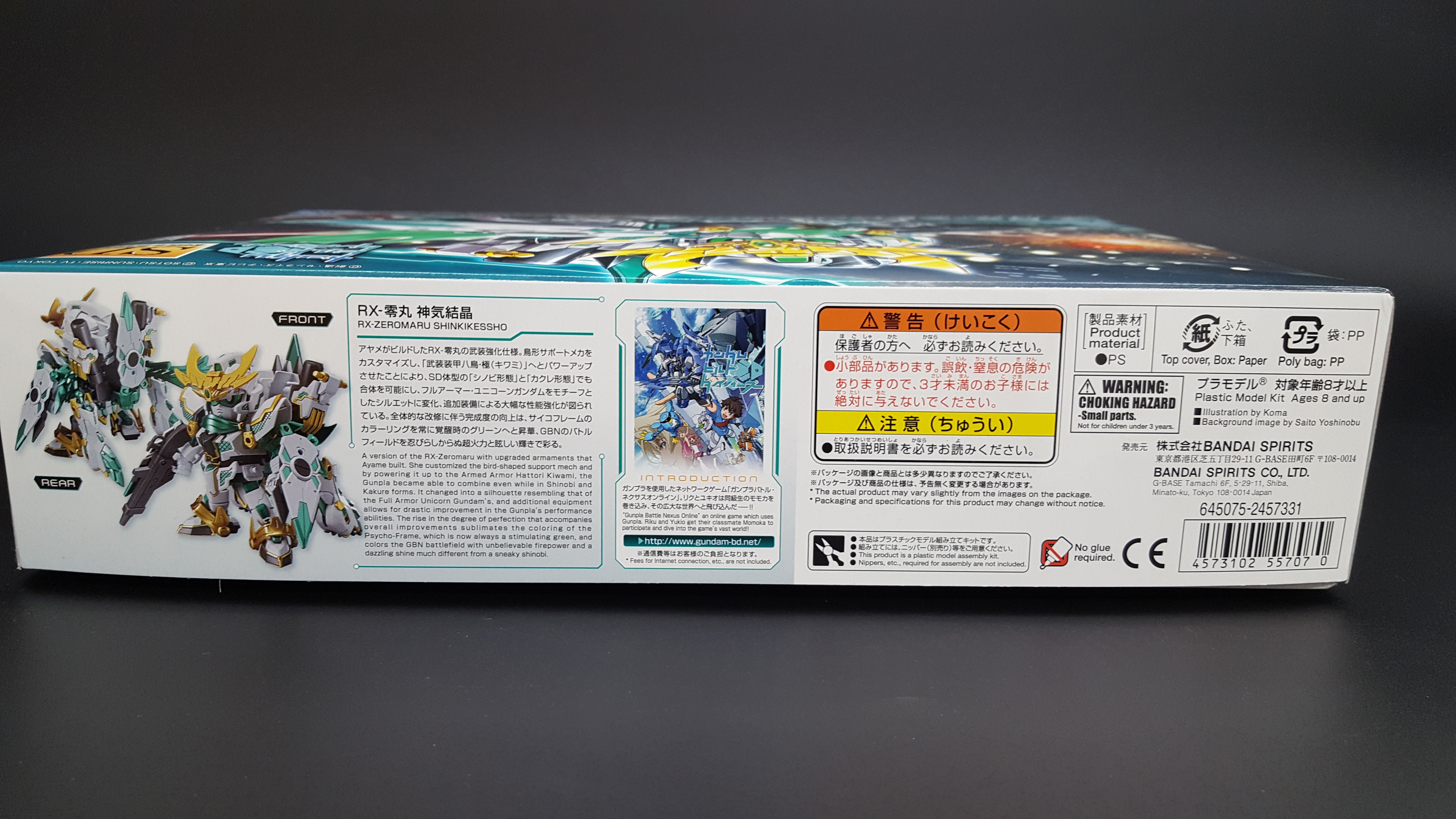 On this side of the box is a simple profile of the source material, and front and back shots of the kit. And all the product label… stuff. It’s not terribly exciting, so let’s move on! 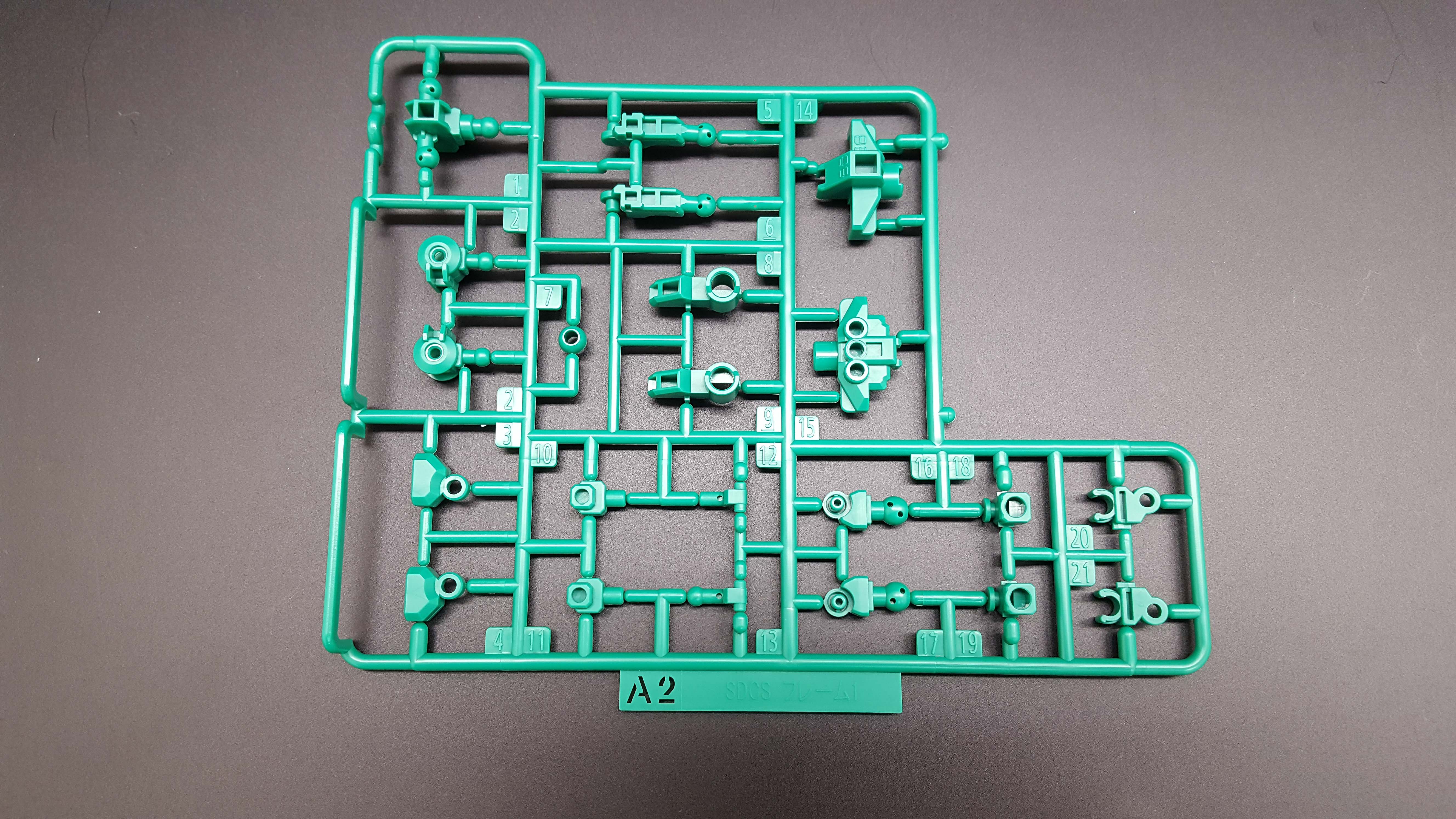 Aw yes. The A runner is a lovely emerald green that builds Zeromaru’s Psycho Frame. It doesn’t have a glossy finish, but it still looks really nice. 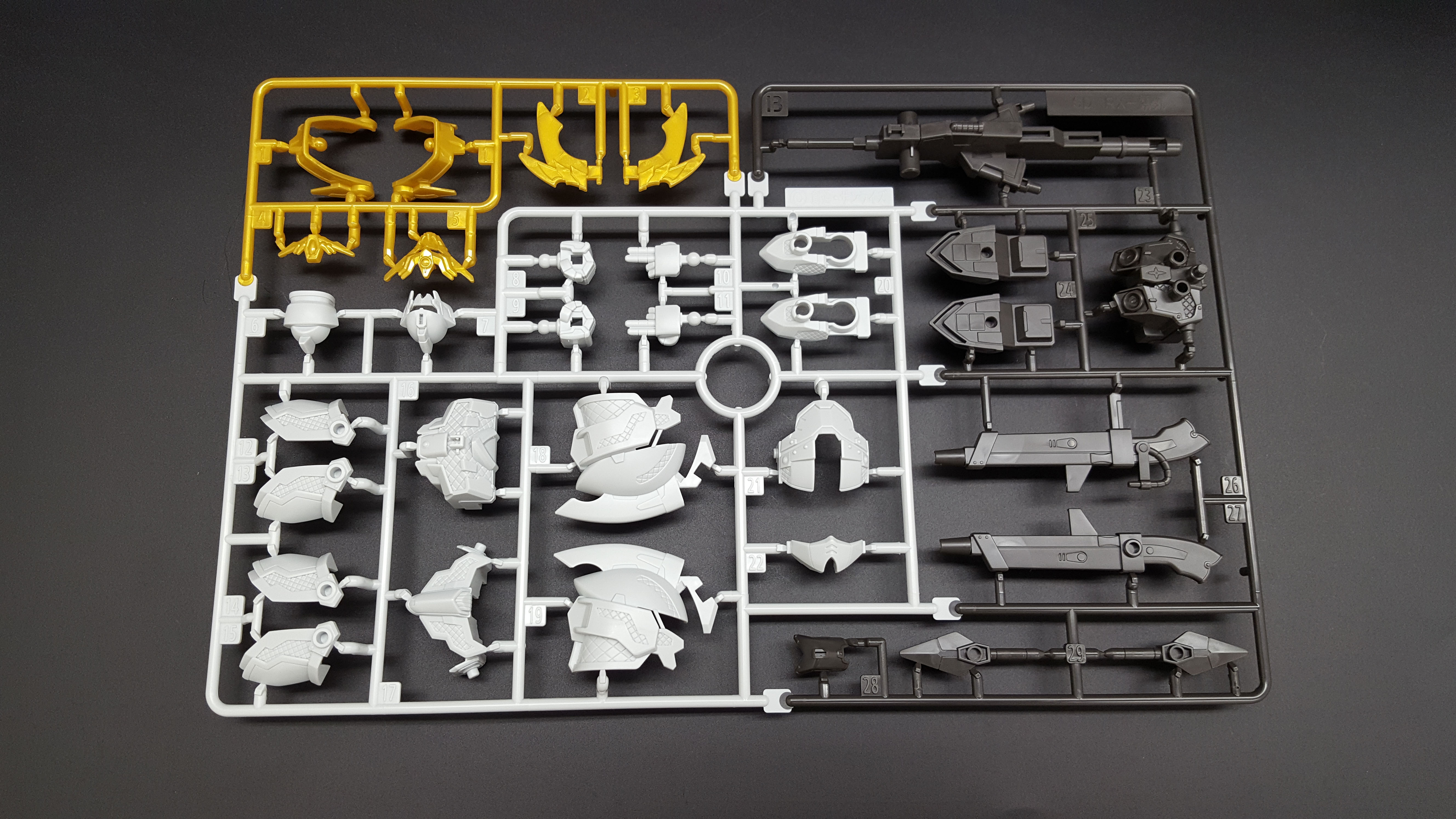 Multi-color runners are one of my favorite things in modelling. This one has the basic off white body parts, black weapons parts, and gold accent parts. You can also see the “HG” form’s face up there. 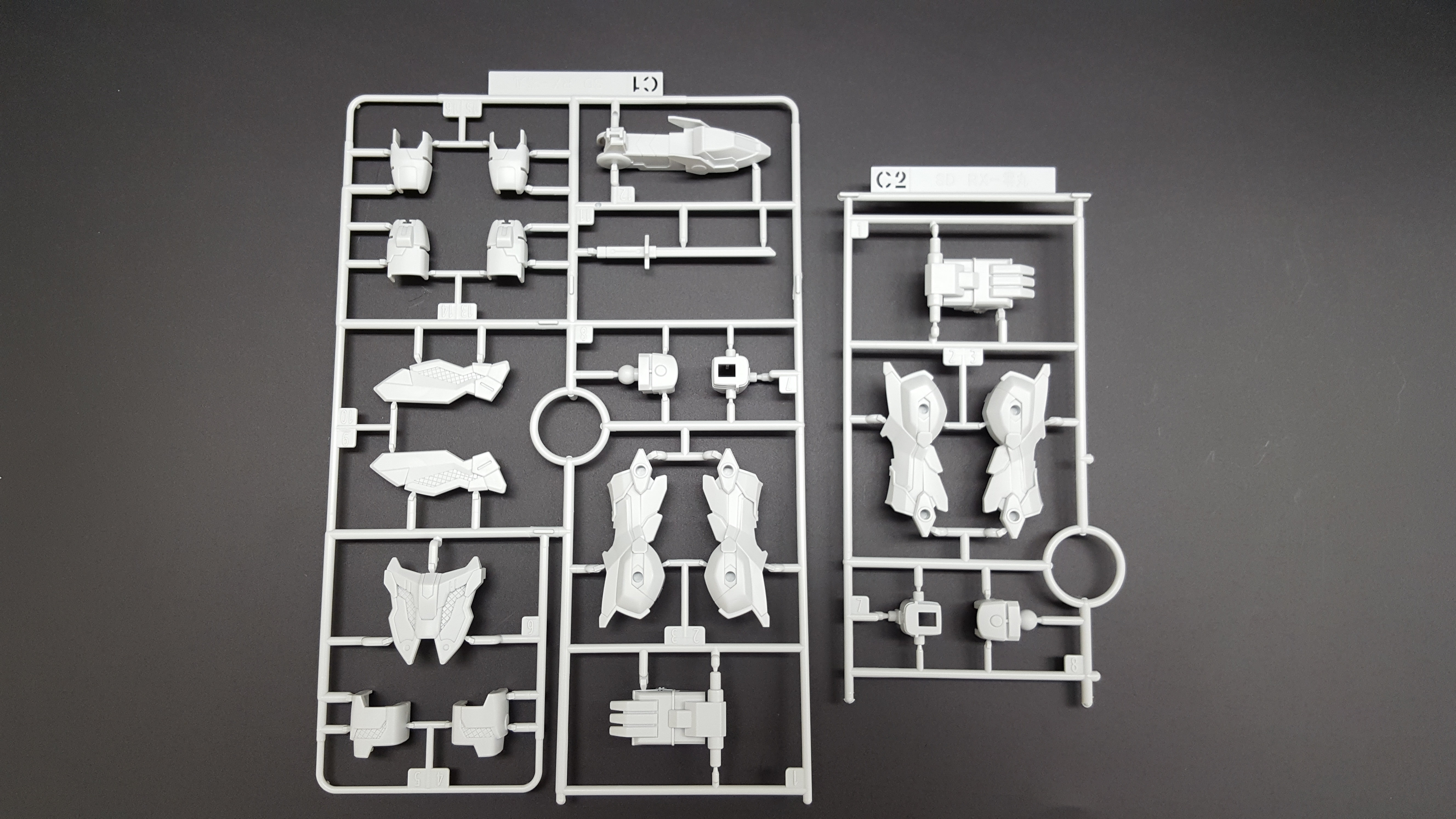 The C runners present more off white body parts; these look like they’re going to mostly be used for the “HG” form. 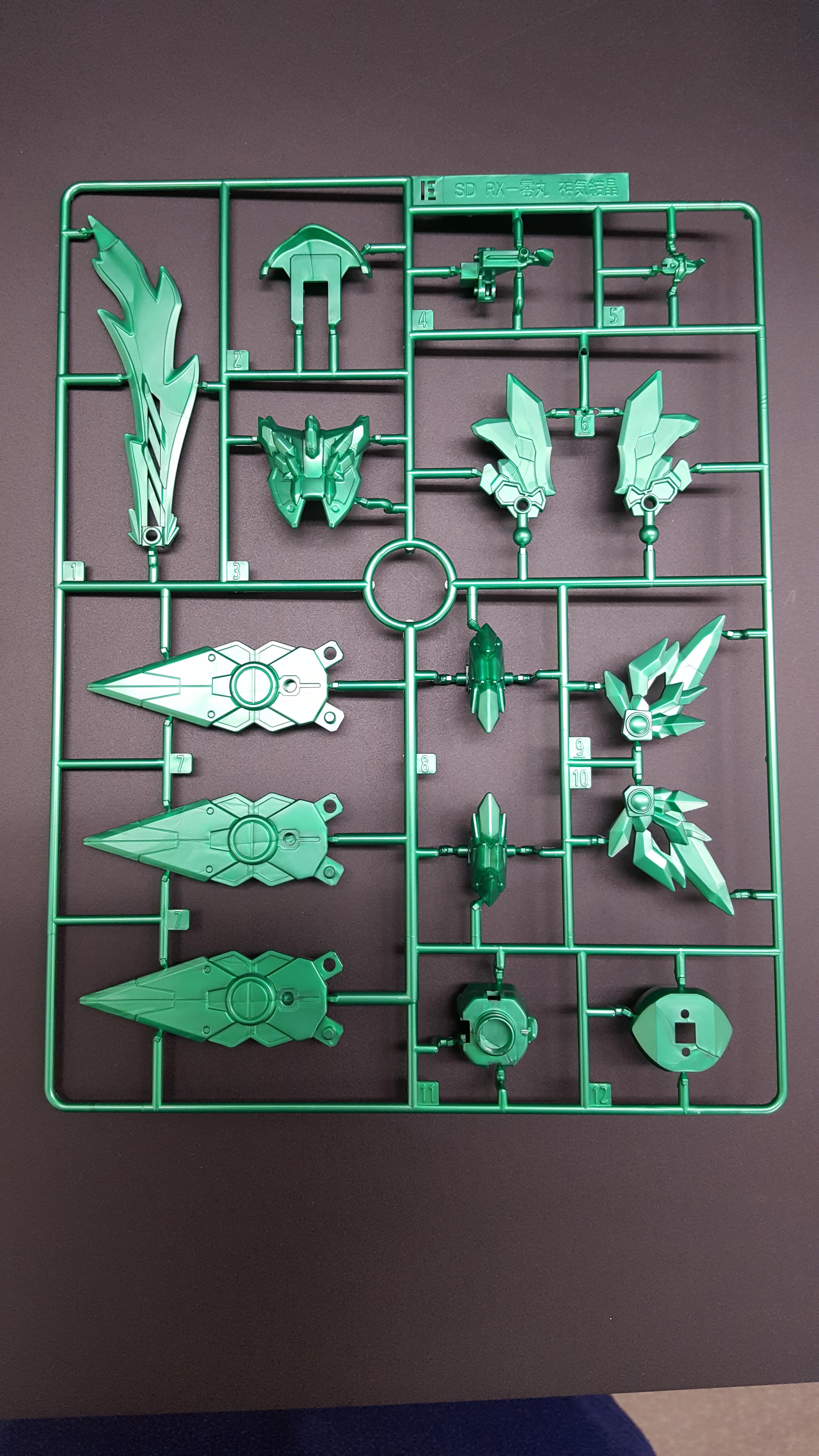 Here’s the good stuff: the E runner brings us all the super-glossy emerald green parts which are mostly used for weapons and effect parts. 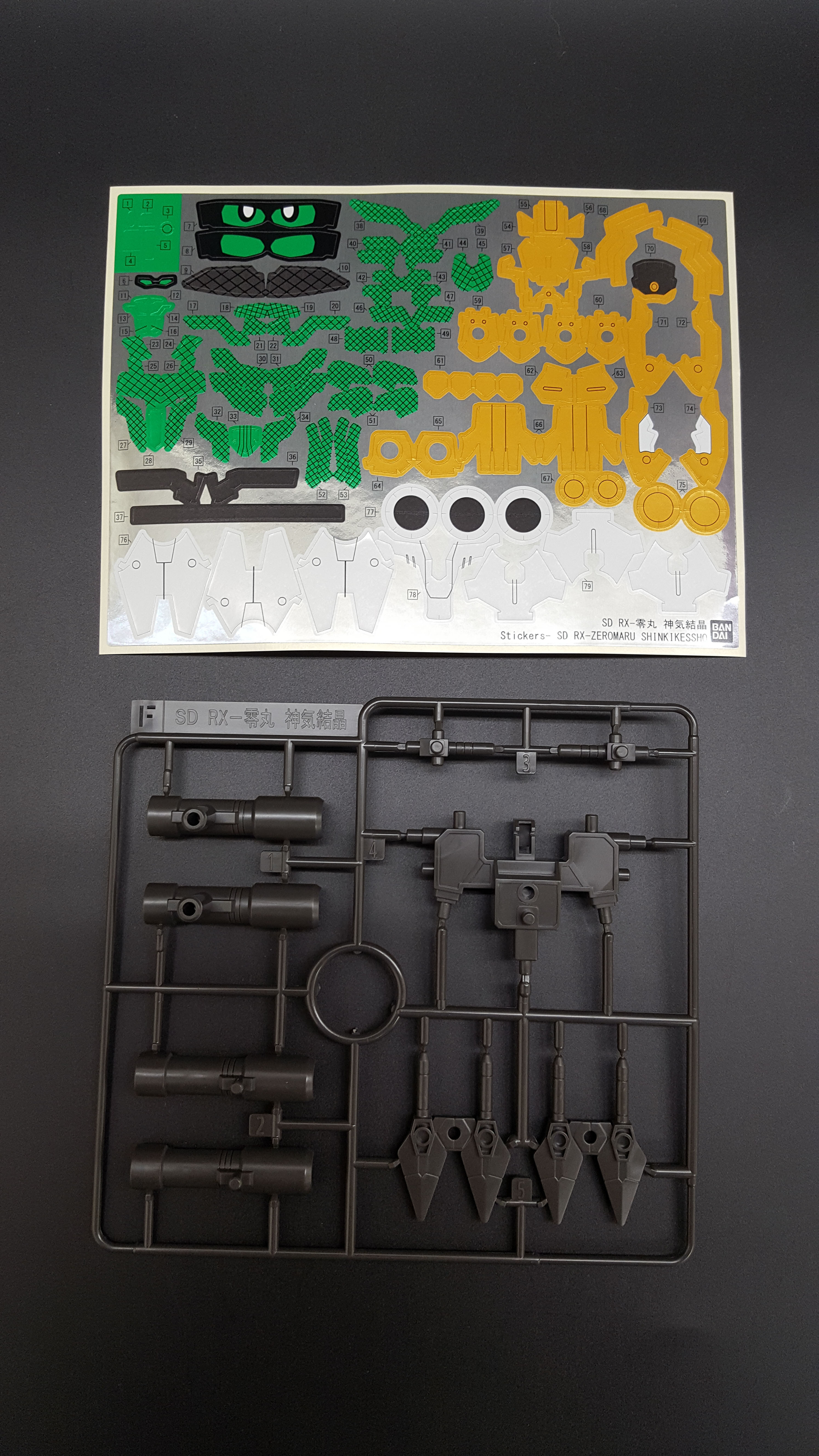 That is a lot of stickers.

No decals on this guy, just a whole pile of foil stickers. The nice part is that you do get the crosshatch and some other details on them, and the metallic shine will give this kit all the flash it’s meant to have, but you may want to get some tweezers ready to get all of these into place properly.

We also have more weapons parts on a F separate runner, such as the Kunai.

So what do you think? Is the Shinkikessho version RX-Zeromaru worth picking up?