Cheesy Peas. A Delicious Combination of Cheese and Peas… Think on, Mam!

Seriously, though… What do you get if you merge a certain brand of dueling monsters with the One Year War?

Gundam Build Fighters. That’s what you get.

This is why we can’t have nice thi… Hold on. This model is not half bad. Let’s not throw the baby out with the bath water without at least giving this a closer look.

So, Build fighters? What is this mullarky all about? This is where it gets a little Meta…

To make the matter simple for those who do not yet know, the Build fighters series has a premise rooted in the success of Bandai’s own Mobile Suit Gundam line of models which, though popular since the series first aired in 1979, flew to new heights of popular acclaim at the end of the 1980s as the company began experimenting with something which I call ‘multi ability kits’. By this, I mean models molded in such a fashion (with pre-colored parts and stickers in addition to normal decals) so that they might be built with no further work and still look good, but which were still of a quality which would appeal to older customers who wanted to work on them as more traditional kits.

Consider the High Grade Universal Century series RX-782 Gundam: a direct box build on the left, with a more finished (and airbrushed) build on the right. The kit on the left really does not look bad at all, and a younger builder could easily be content with their work without risking ruining it by having to get out the paints.

Well, they might reach for the panel line markers, but that is about all that is needed for a direct box build.

Even then, many more ‘finished’ builds can be turned out nicely when treated as the RX78 on the right above: spray down the finished kit with Mr. Hobby Flat Coat UV (which was formulated to adhere to raw styrene as well as it would to paint, and serve as a clear undercoat) before being toned down with airbrushing, washing and other weathering effects.

It does not stop there, though. Take a gander at some of the models in the GunPla World Cup each year (the 2016 champions can be found here), including my own entry for this year (2017): Dozzle and his personal Guard. You will see how far these kits can be taken.

That is the genius which began with Bandai’s ‘System Injection’ back in the ’80s and has culminated in the recent ‘High Resolution’ experiment.

The conscious effort of Bandai to make their lines as inclusive as possible, appealing to a broad range of modelers not only simplified their production lines, but also fed into a hobby mentality in which parents and children could share the same models, and be happy with the results – a thing which the many events the company runs around the world, including the GunPla World Cup, emphasizes. Indeed, locally, my own model shop has been provided with paint, cement, and tools on the understanding that they reserve space for young modelers to work on their kits and get advice from the owners and other modelers. All at the instigation of Bandai.

However, is it wrong for a company to nurture their customer base in any way they can? Absolutely not…

Even reviews like this. My God… I’m part of the System.

Perhaps I should throw it on the ground… Though I fear Ryan Reynolds, and his taser.

This is where Build Fighters comes in, in 2013. So, with tongue in cheek, the series is described as taking place years after the ‘GunPla’ craze of the 1980s caused a massive economic boom in Japan. At the time of episode 1, a second great boom grips the world and a series of GunPla Wars are being organized, in which teams of builders and drivers compete in head-to-head battles to determine victory.

Before you draw parallels to the ‘robot wars‘ series (which began in the UK in 1998, before taking the world by storm) you’d be 110% correct. The Build fighters series director, Nagasaki Kenji, loved that show (I did, too… Mostly because of Craig Charles being a total boss, and Hypno-disc, of course).

In the first Build Fighters series, the young Sei Iori, a budding GunPla Builder, has the usual anime teen dream of becoming the best at catching Pokemechs and…

No! I mean, of becoming the best participant in the World GunPla Tournament, and one day be as good as his father, after meeting with a mysterious boy named Reiji, who promises to aid Sei. Together they set out to test and improve Sei’s GAT-X105B Strike Gundam and eventually take it to the Grand Finals – but not before they have fought dozens of ‘villains of the week’ and sold Bandai a literal megaton of associated models (each with its own game code so builders could take their models into the video game Gundam Breaker).

Media and merchandice in lock-step with each other.

However… I’ll admit to not having seen the series, nor ever playing the game, but I do like good models, and I collect dolls.

So, seeing this come up at HLJ, I had to have a go. I love the Gyan, and fencing, and already being a collector of Frame Arm Girls, I could not resist.

Like most HG kits, the Gyanko (Girl Gyan) is molded in the correct tones for the final kit.

Unlike normal HG kits, however, there are no poly caps for the joints… This gives me cause for concern, but we shall see. 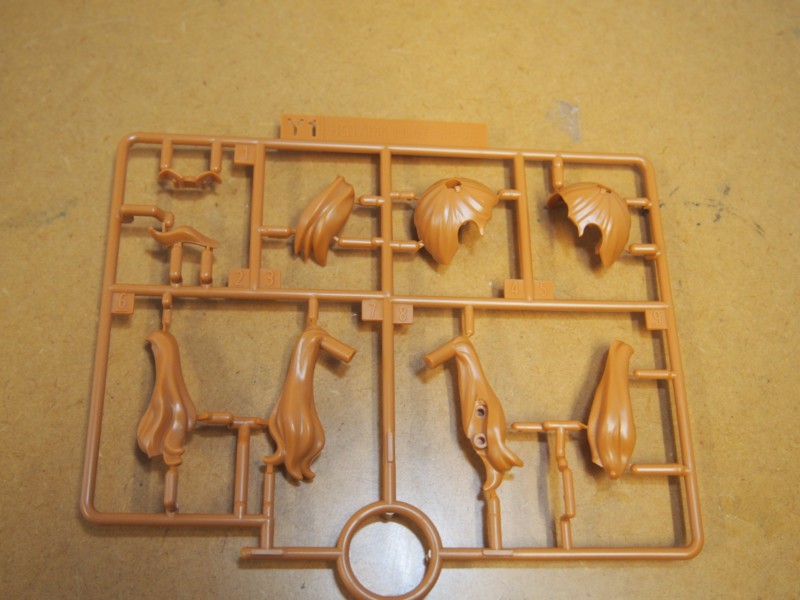 Stickers… Why did it have to be stickers?

Well, that was a given, considering the nature of the kit. Those who cannot paint in the details, such as the collar and eyes, have an easy time of it, whilst those who are able can simply discard them. 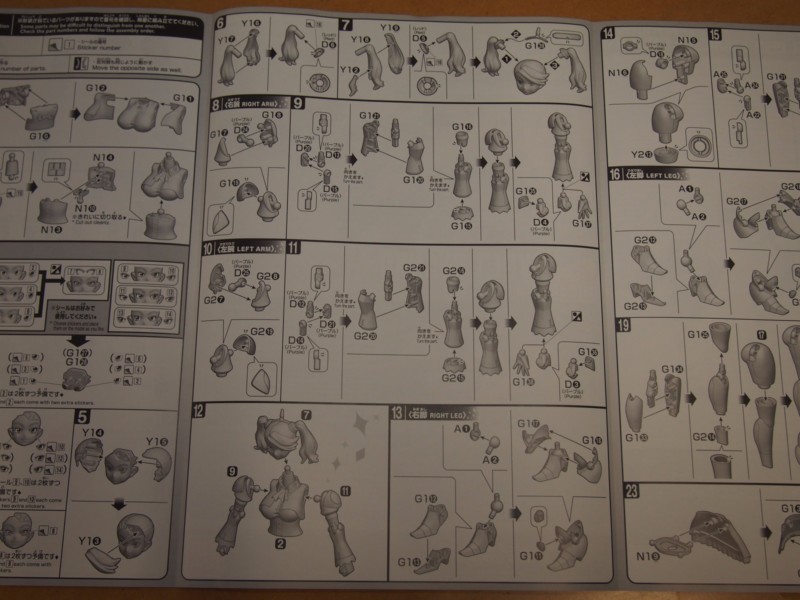 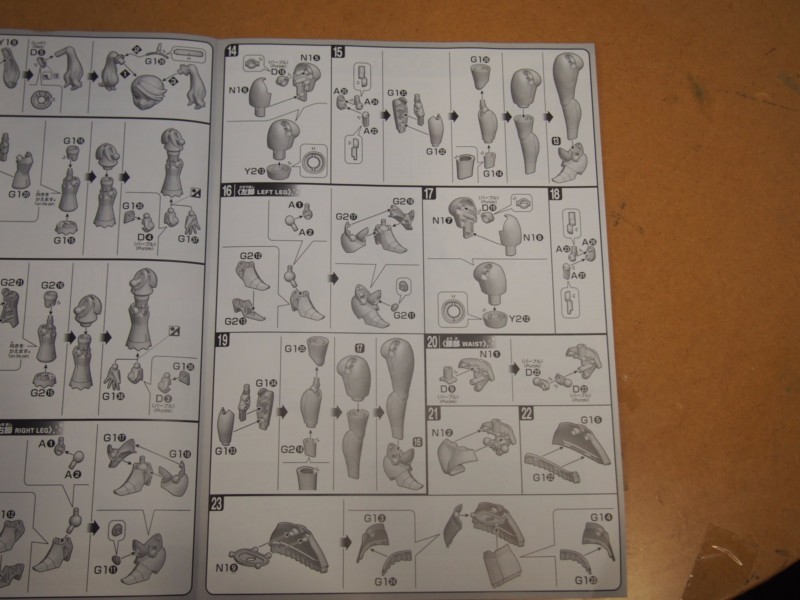 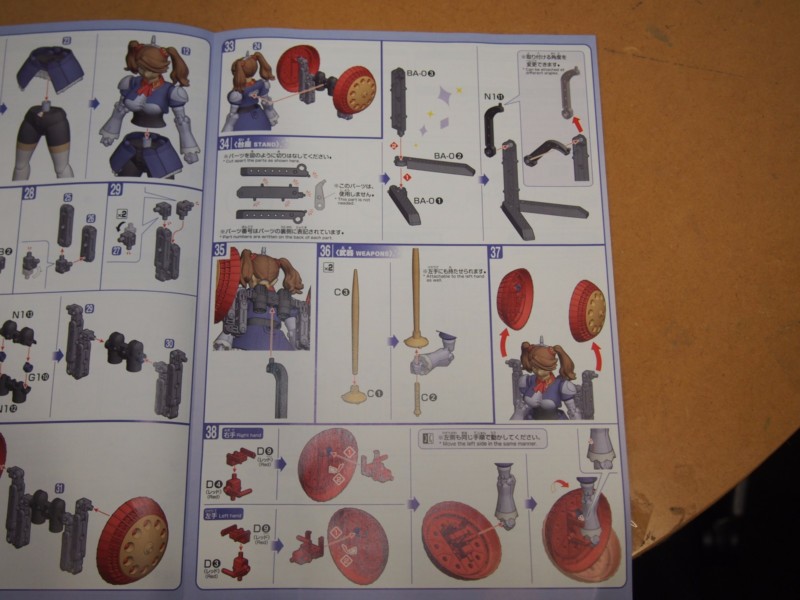 A good, Bandai HG kit from the outside with an interesting subject matter. I’m not sure about the lack of poly caps for the joints (I am informed this is a cost saving measure), but otherwise I am not displeased with the mold quality.