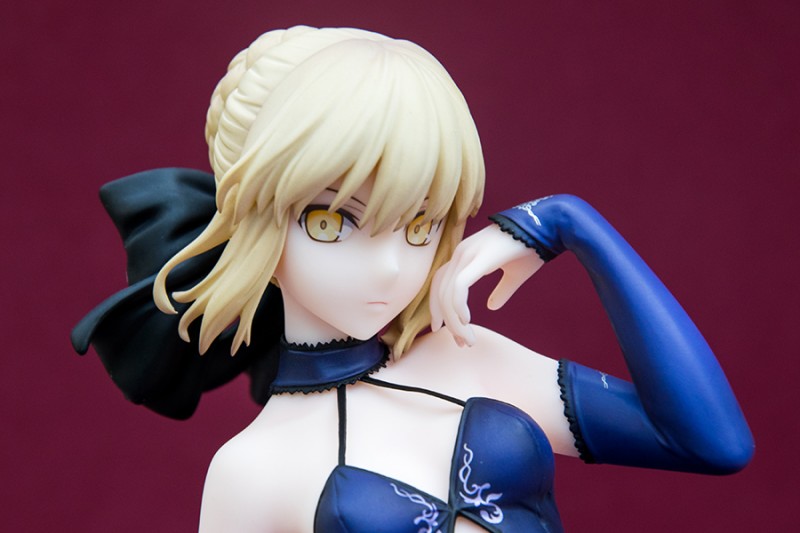 Here we are with the second part of my review dedicated to Saber Alter Dress ver. figure by Alter or, if you prefer, the actual review for this figure.

Undoubtedly, this figure is what I can deem as a spectacular piece of art, both speaking of quality and overall appearance. Saber comes in a beautiful and rather detailed outfit, with its quite impressive gown as the focus, and the real masterpiece. 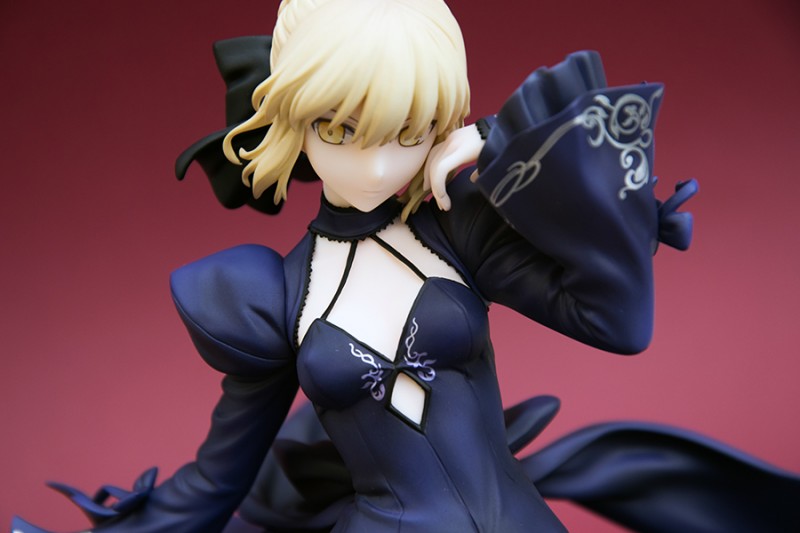 The color scheme of Saber’s outfit is mostly dark, which makes for a very pleasing contrast with her fair skin and platinum, braided hair. This figure somewhat inspires elegance and class, mostly thanks to the dress, but also due to the pose Saber has been sculpted in. 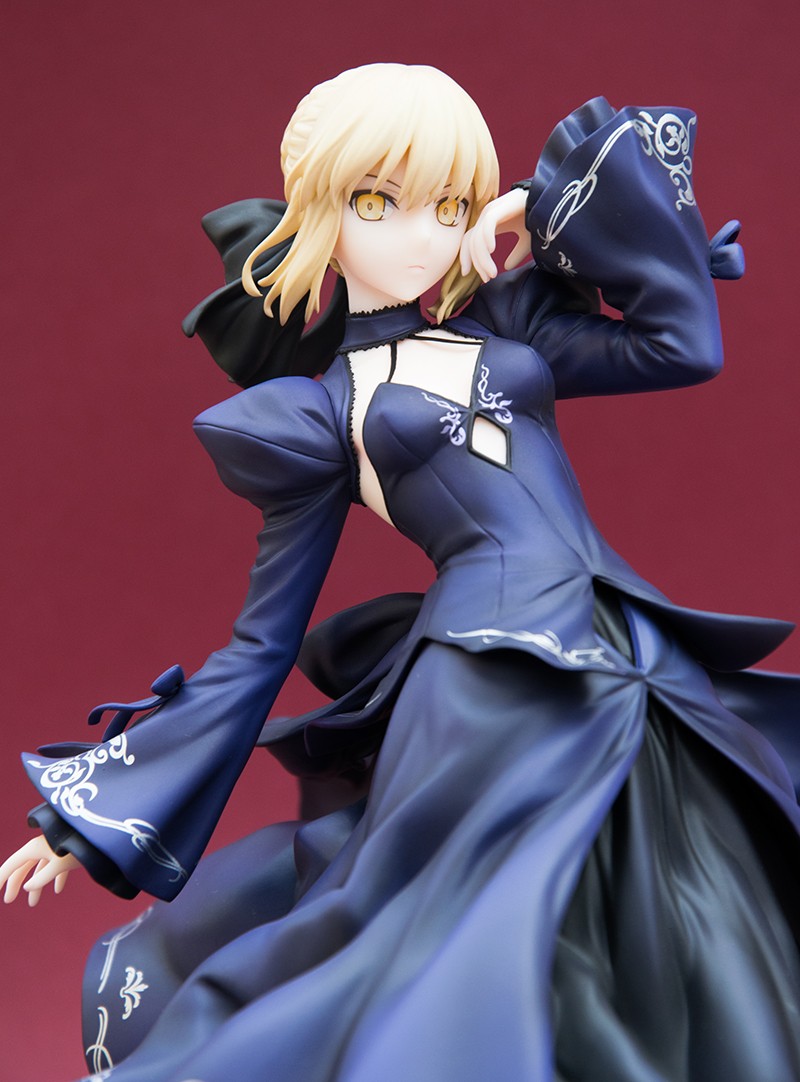 What is interesting is how many display options this figure is provided with. Alter proposes Saber Dress ver. in a standard pose, which is stunning on its own with Saber being portrayed wearing her full dress and looking as she was almost dancing to the notes of some kind of mesmerizing song, not trying to hide her elegance and infinite class, but actually flaunting it. 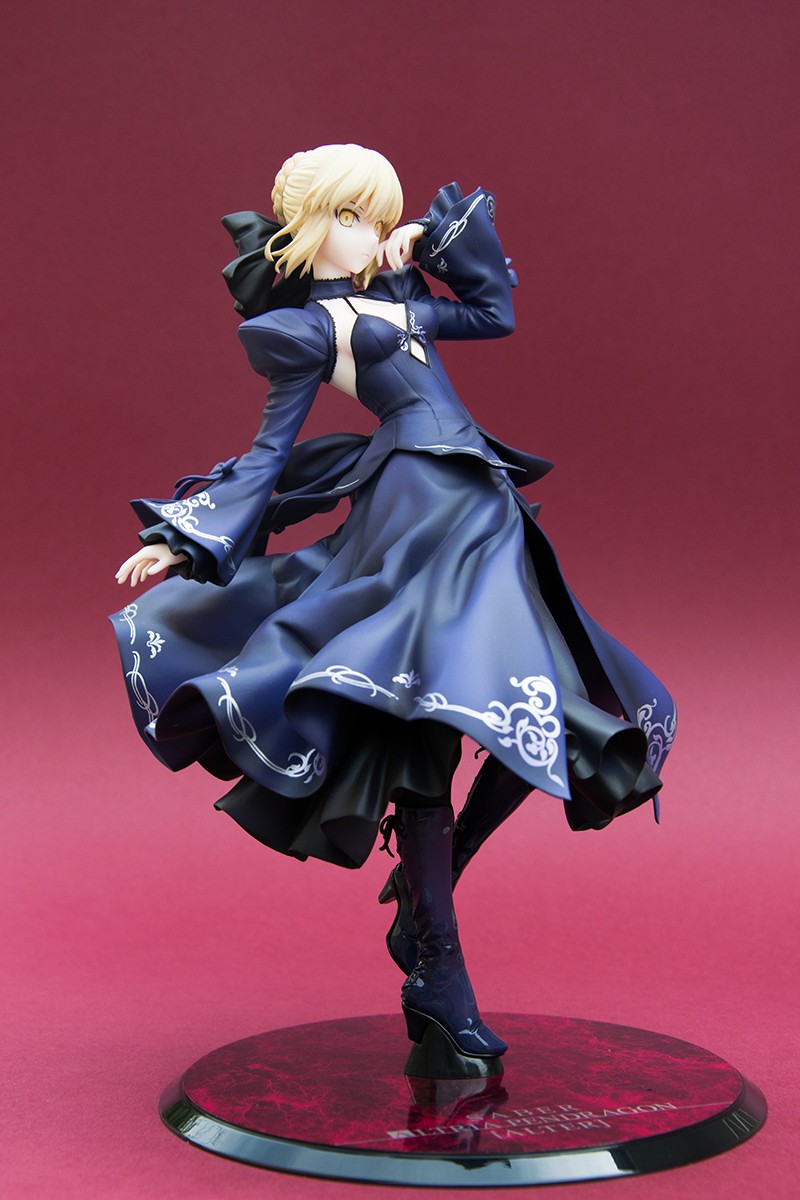 Then the company gives the lucky collector who owns this figure the ability to have Saber posed more “warrior-like,” with the sword she keeps in place with the provided extended arm. 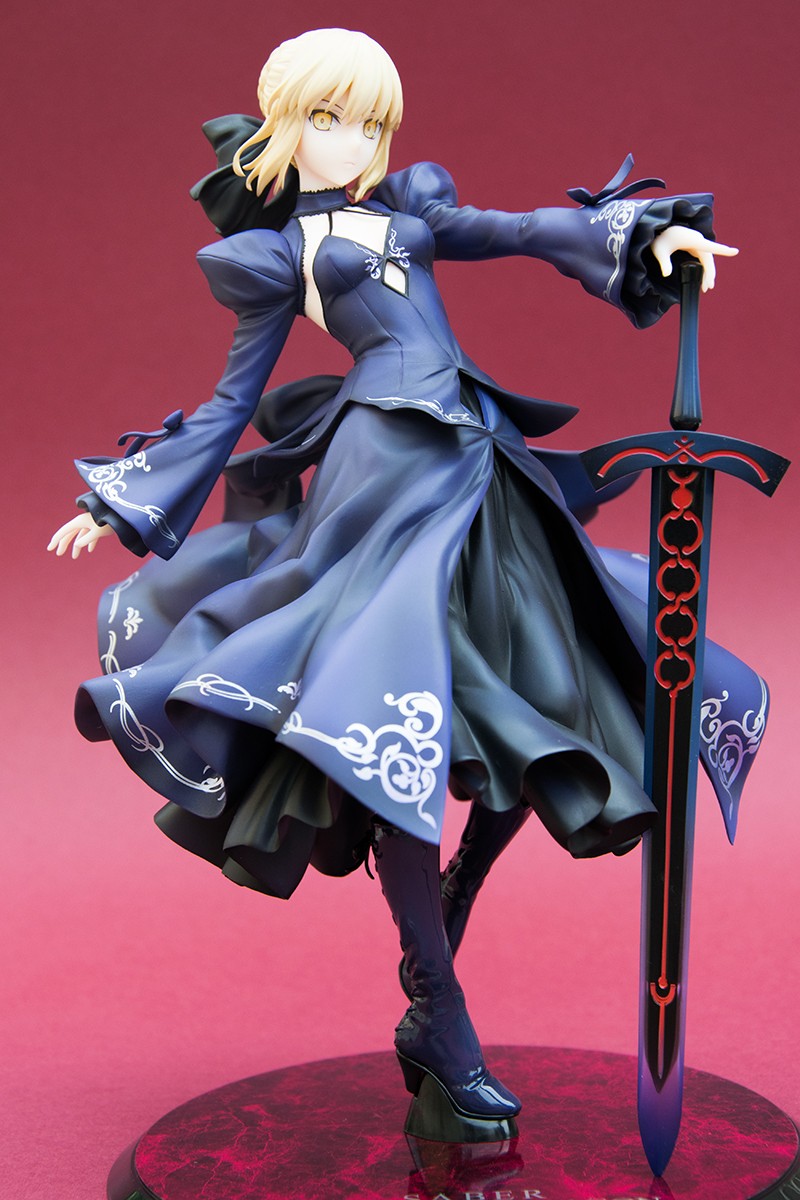 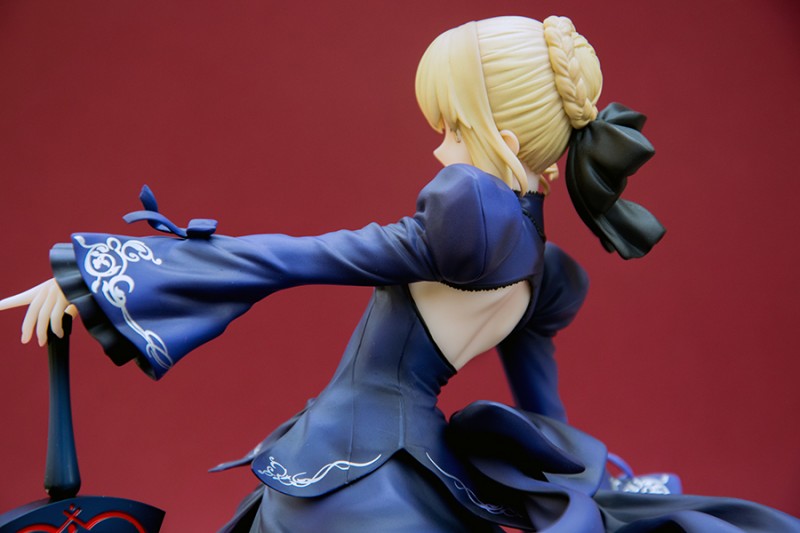 But possibilities seems kind of endless with this figure, as Saber also comes with an alternate torso which sees the top part of her dress without the puff sleeves and gives a sexier and more revealing way to display the figure. The cherry on top — still speaking of display options — is the ability to remove the gown of Saber’s dress so to be able to display her in her lingerie, which is sculpted to perfection and is extremely detailed.

Thanks to the generous amount of display options and to the quite impressive presence this figure makes, Saber Alter Dress ver. surely is a piece which would be able to enrich every collection.

Technically speaking, this figure is very close to perfection. The masterpiece work, as pointed out a while ago, definitely is the impressive, large gown of Saber’s dress, which not only is rich in detail and sculpted to perfectly mimic an actual fabric gown, but is also composed of two layers: the upper, of a rich and elegant blue color, and the black part that stays under that and which is clearly visible when looking at the front side of the figure. This smart combination is able to add volume to the gown, making it look very realistic. 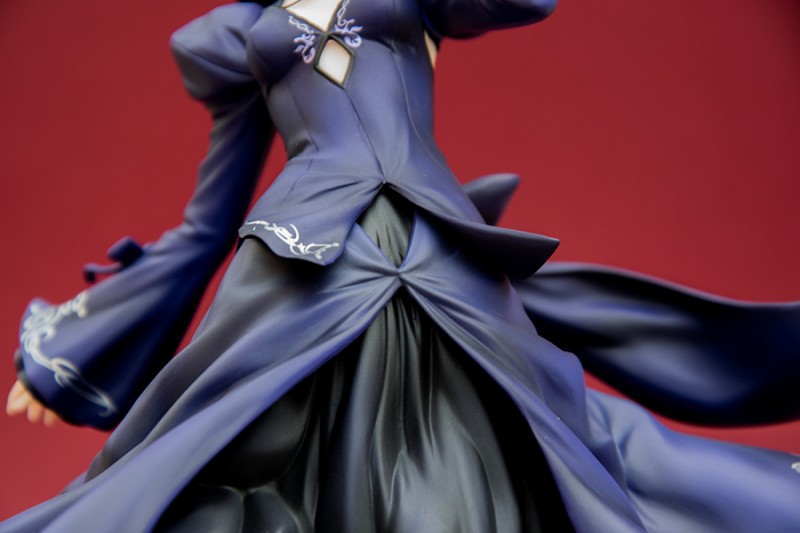 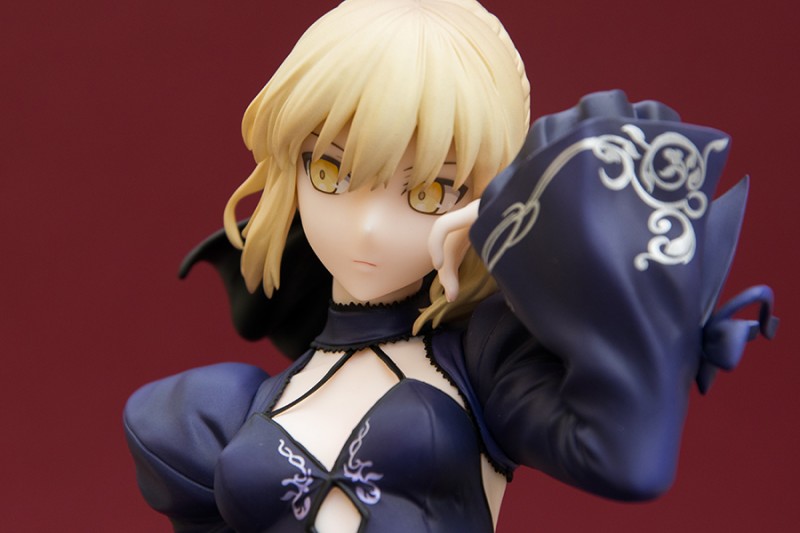 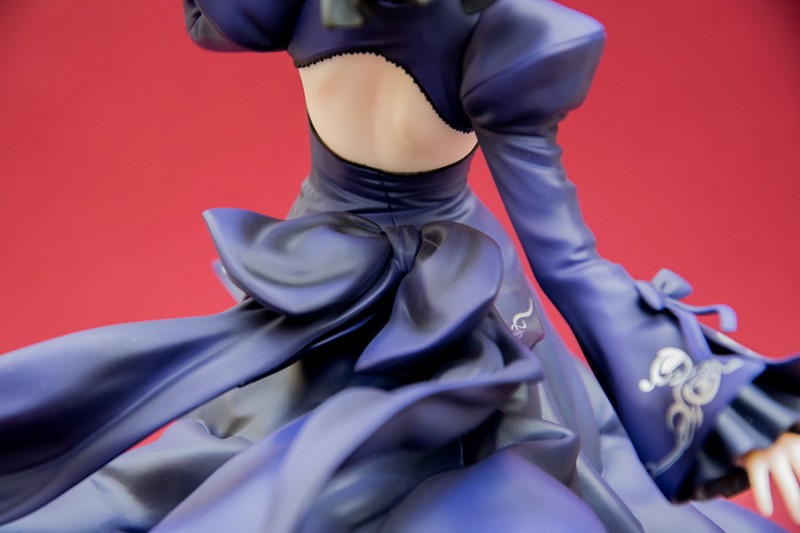 The same approach has been taken with the upper part of Saber’s dress, which tightly hugs Saber’s petite frame being able to highlight her modest yet sexy curves. While rather tight on the chest and belly, the top part of the dress loosens a little on the bottom part, meeting and matching the elegant movement of the gown.

In her standard display option, Saber wears a short cardigan with puff sleeves and rich in details, with the bottom part of its sleeves made in two layers just like the skirt, which gets back to the design of the gown and to the loose part of the top.

The two small strings on Saber’s chest that are attached to her choker actually are separated from the part of Saber’s exposed skin instead of being painted on it. I think that this is a very smart way to add delicateness to this already stunning figure.

Saber’s sword, made of slightly clear plastic on the tip and on the borders of the blade, is meant to stay in Saber’s extended arm and is secured to the base with a tiny hole where the sword tip has to be placed.

Frankly, this would have been my favorite display option if it wasn’t that my copy of the figure has a little issue with this setup. The sword perfectly fits into the small hole in the base, but keeping it in Saber’s hand is quite hard.

The sword keeps falling but, after a couple of tries, I realized that the problem doesn’t lie in the weapon itself. The figure has a little balance problem, most likely caused by the heavy skirt, which prevents Saber from standing perfectly straight on her base, thus the extended arm isn’t able to reach the sword handle where it is supposed to, and Saber’s hand isn’t able to keep the sword in place. 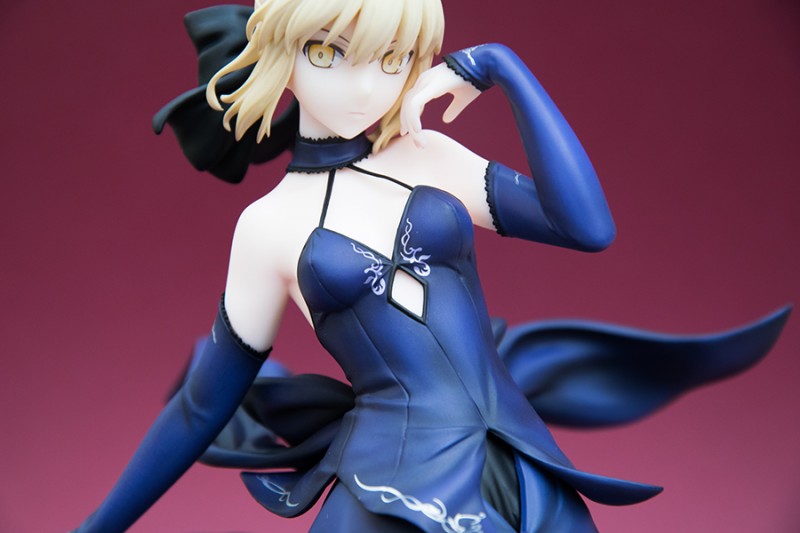 I’m quite disappointed by this issue because I would have loved to pose Saber with her sword, and as the figure is something made by Alter I’m actually very surprised I found a silly issue like this, but this still isn’t something able to ruin this stunning item for me.

In any case, not only the sculpt of this figure is stunning — from the dress to the hair and the ribbons Saber wears on her back and as a hair accessory — but also the paintwork. I’m actually amazed, because different finishes have been used and they were applied just in the right places. Saber’s dress is magnificently shaded and, considering how dark the outfit is, this must have taken quite some effort. 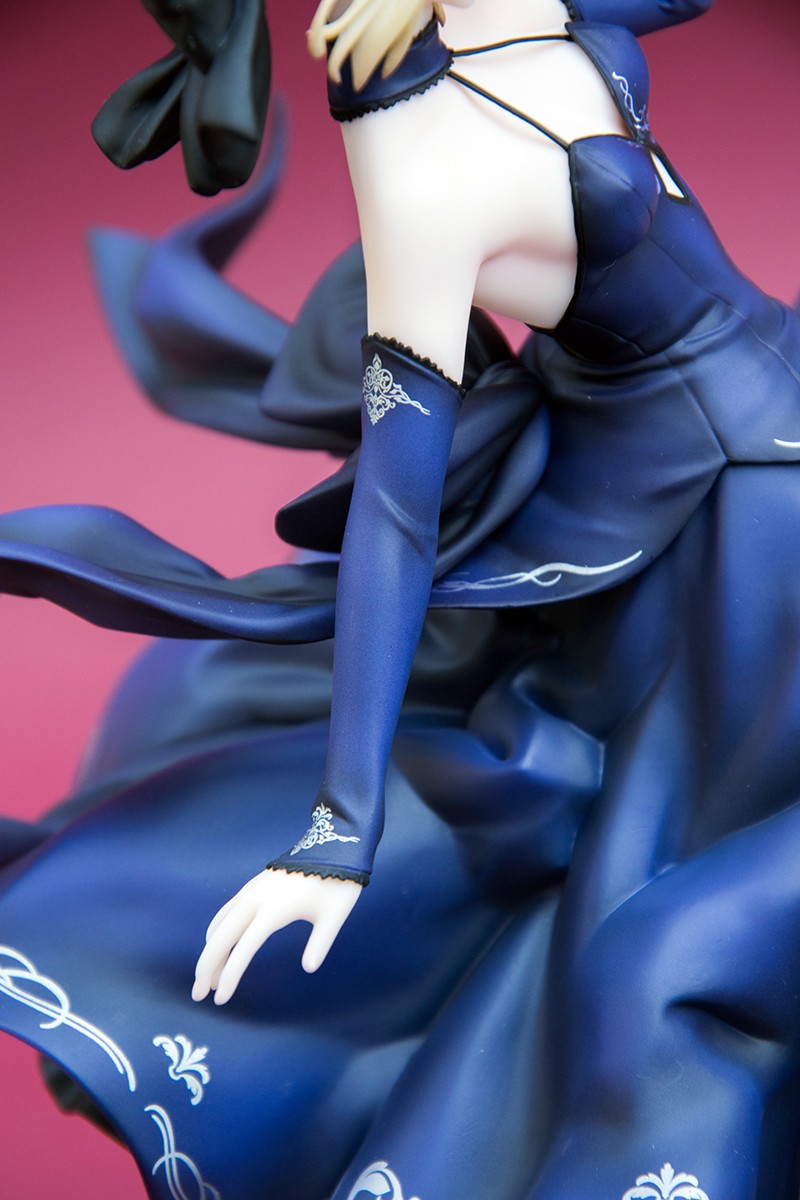 The white decorations on the dress are flawless, as are the intricate details of Saber’s sword. Particularly beautiful and perfectly painted are Saber’s boots, which have a shiny finish and an amount of intricate detail I’m not really able to explain with words.

The very same is true for what is “hidden” under Saber’s majestic skirt. The figure can be posed in a slightly sexier way, being able to completely remove the gown to have Saber wearing her black lingerie, composed of a pair of thigh highs with garter belt and frilly, black panties. This last display option goes particularly well with the sleeveless alternate torso, for a sexy but not lewd Saber. 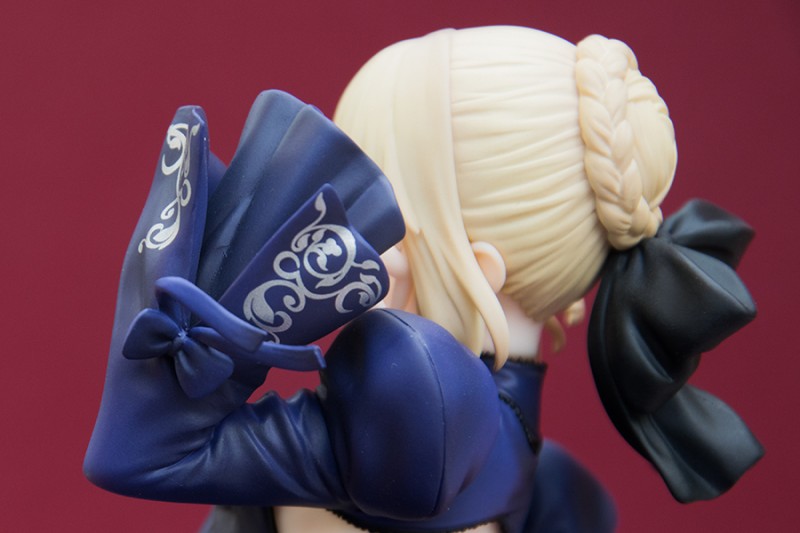 A mention is owed to the base, which is relatively simple but very eye-catching. The base is of a crimson color which looks almost purple and resembles marble on which the source and character are written in white. As previously mentioned, the base has a small hole for the tip of the sword to go in, and is provided with a glossy, black border. In its center there is a small plastic rise to put Saber’s foot on.

Last but not the least is Saber’s amazing expression. The “Fate” heroine wears a daring expression on her face, which is very serious and somewhat intimidating. The undoubtedly astonishing display presence this figure makes thanks to the dress, pose and the amount of detail wouldn’t be nearly possible if it wasn’t for Saber’s expressive face. 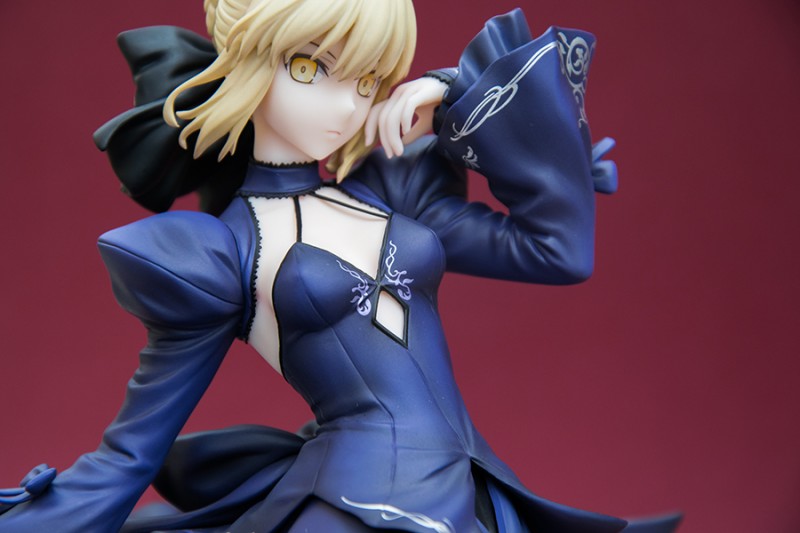 This surely is a figure worth having, even considering the issue mine has with the extended arm and the sword not staying in place. Although the sculpt and paintwork are perfect, there are some flaws in the way the figure is balanced. Due the very heavy gown Saber isn’t able to stay completely and perfectly straight, and I believe that this is something Alter isn’t supposed to let pass during quality control.

But, ultimately, Saber Alter Dress ver. figure by Alter is something I would actually miss in my collection if I wasn’t lucky enough to own this stunning figure.