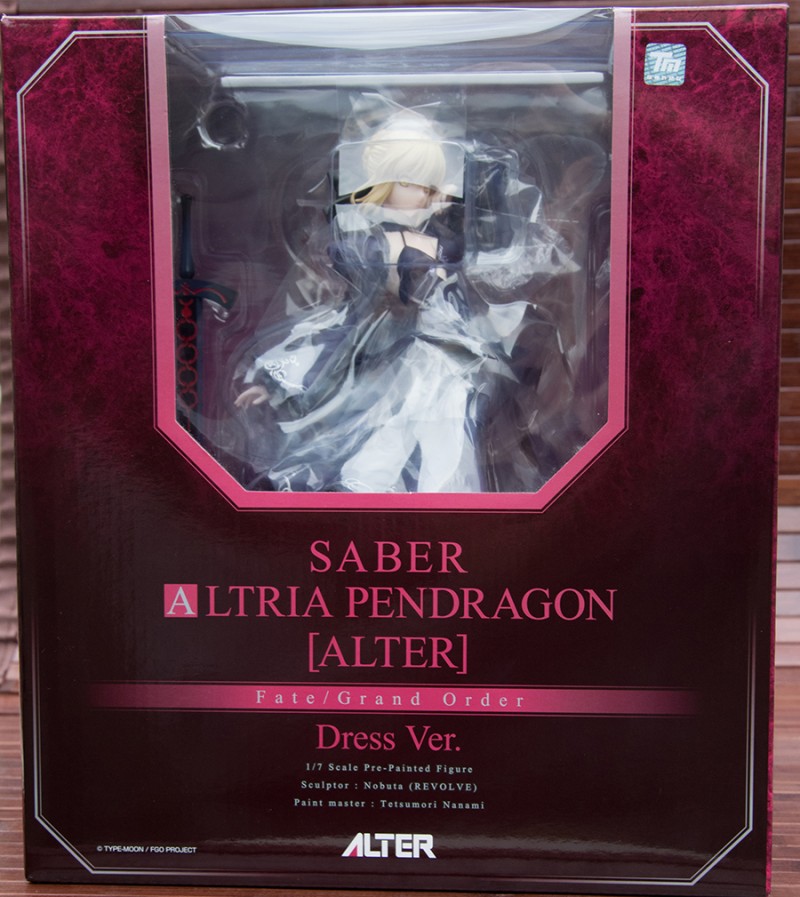 The latest and newest in a relatively long series of figures by Alter dedicated to the “Fate” heroine, Saber Alter Dress. Ver. was released in February 2017. The figure comes with various display options thanks to the alternate parts it is provided with, which include a sword, two alternate arms, and an alternate torso.

The box is well done and quite outstanding — not to mention visually appealing — and mostly crimson in color presenting shades of purple. It is also relatively big, although not insanely huge and definitely quite fitting for the item it contains. 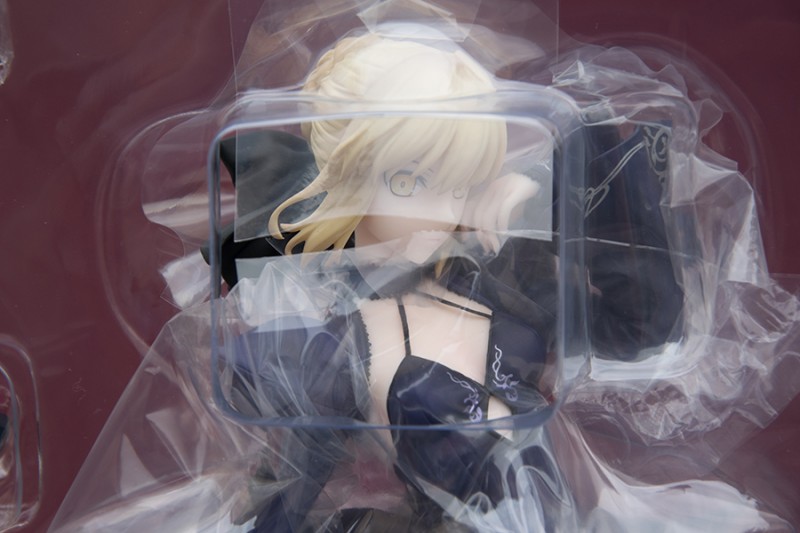 Two parts of clear plastic are present on the box: a bigger piece on the front which also partly extends to the top part of the box, and a smaller part on the back. Both are aimed at teasing the figure the box contains, and both are doing a brilliant job of it. The other two sides of the box have printed photographs of Saber on them, each one previewing a different display option for the figure. 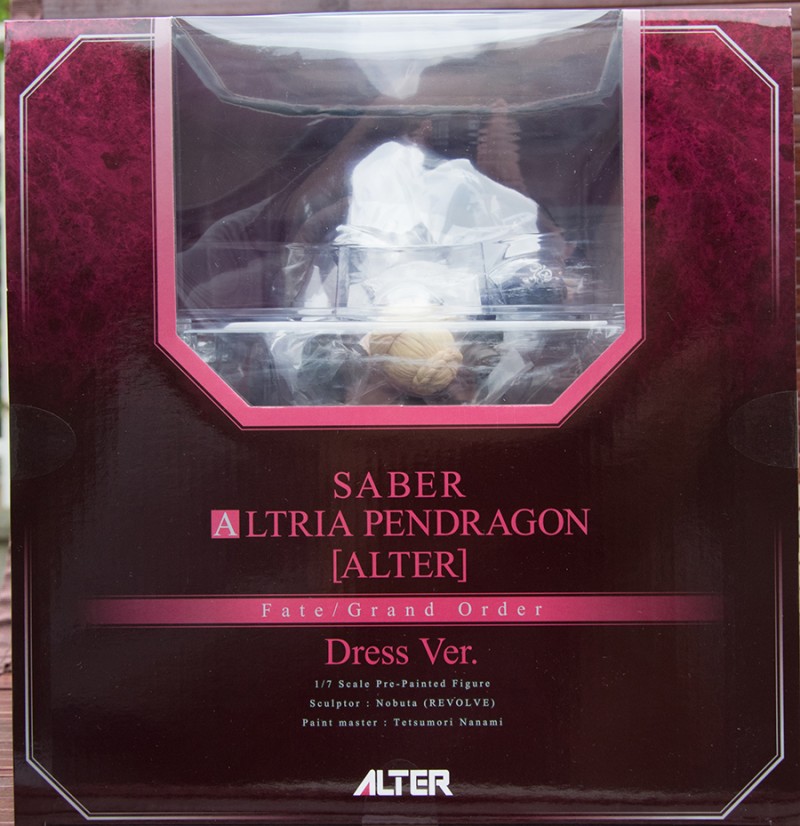 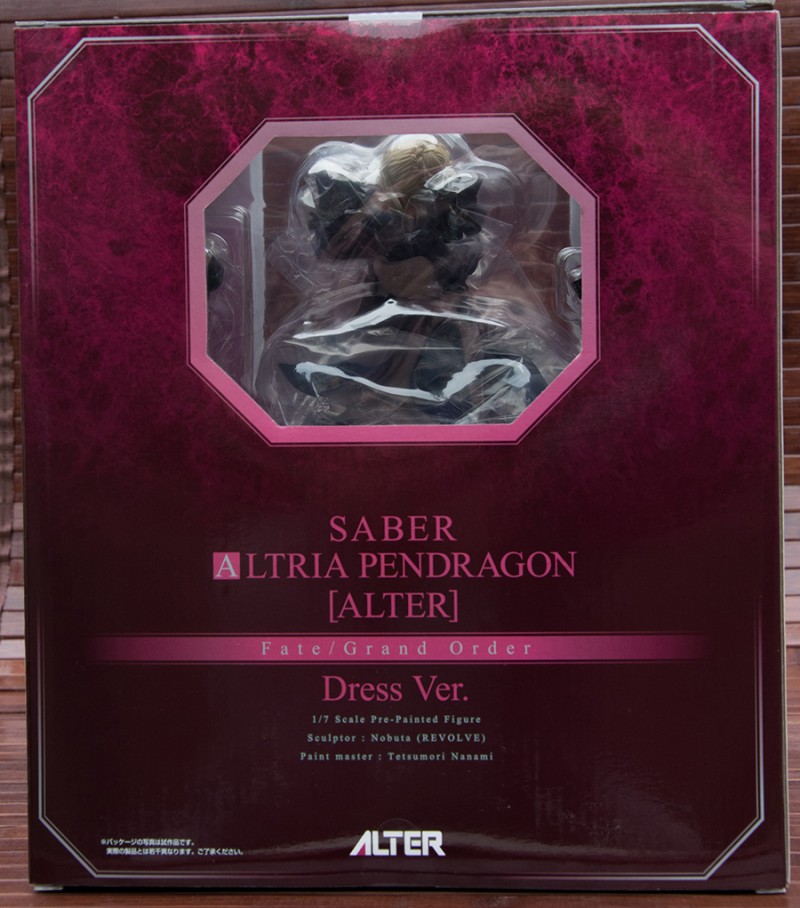 The packaging of the figure is also very pleasing and satisfying. This is a potentially fragile figure due to its amount of detail, and because of the articulated and complex pose, Alter has provided very good protection for it. From the sturdy outer blister to the pleasing amount of protective plastic it has inside, the packaging is aimed to prevent damage such as paint transfer or accidental breaks. 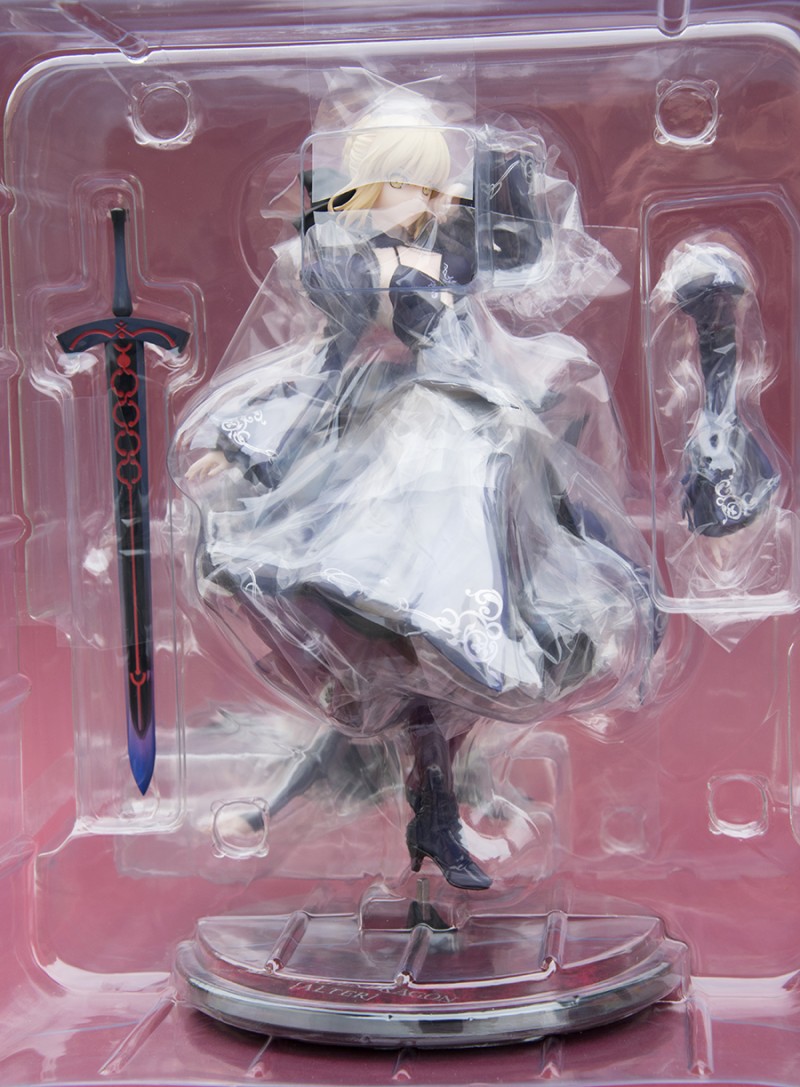 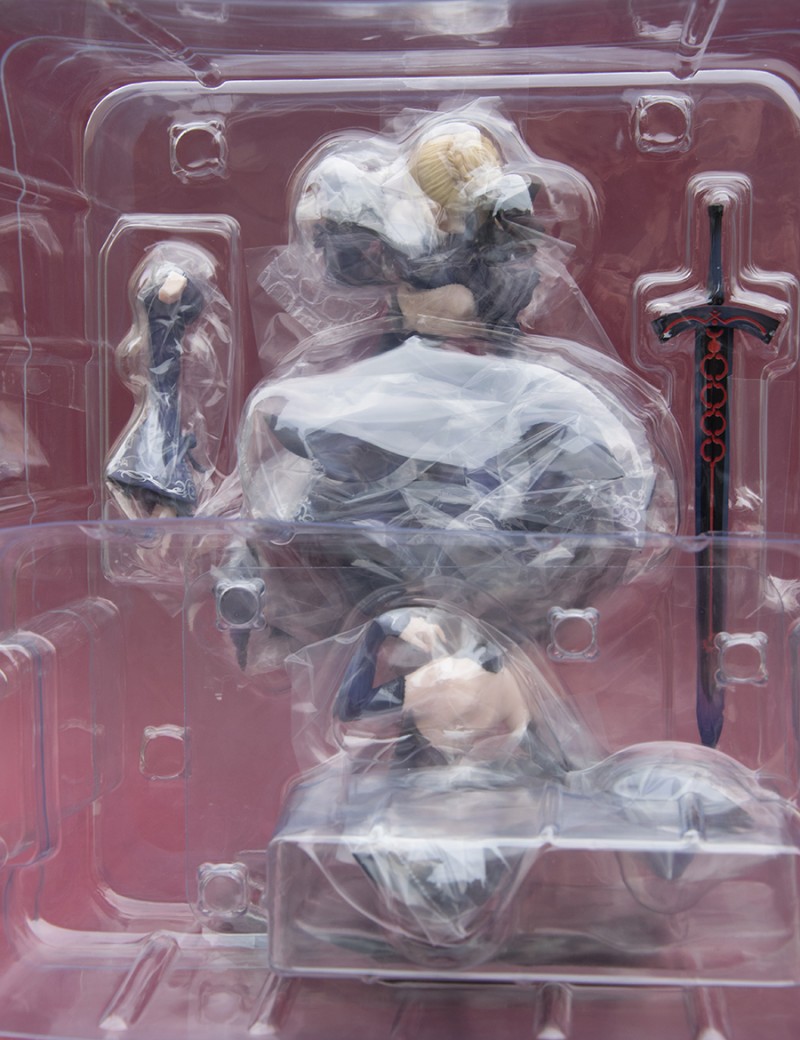 The base of the figure is placed on the bottom of the blister, as is often so for standing figures, while Saber herself is placed at the very center of the protective package. Her sword stays on one side of the blister, with the alternate arm on the other. The alternate torso is placed in its own plastic protection behind the figure, secured with some clear tape to the main blister.

Removing the blister, we are able to find a carefully packaged item. Every part that might cause paint transfer is sealed in its own small plastic bag, and the long skirt is particularly protected by several layers of clear plastic. 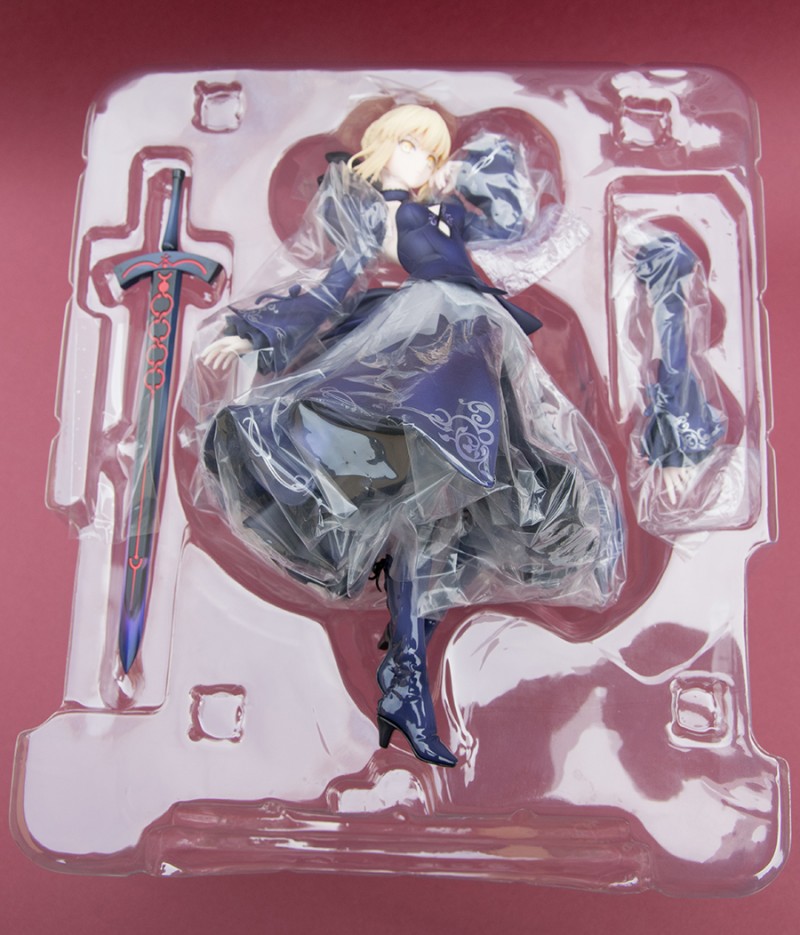 In order to be able to properly unbox the figure, it has to be taken apart and then assembled again. The process is quite simple, but instructions (in Japanese but with illustrations clear enough for anyone to understand) are also provided, explaining how to achieve different display options with the given extra parts.

The first step is removing Saber’s head to get rid of the plastic protecting it, paying extra attention (as also the instructions tell) to the thin and very fragile black strings on Saber’s chest. The removable arm also has to be taken off in order to unpack the figure, and the other arm has to be freed from its protective plastic as well. 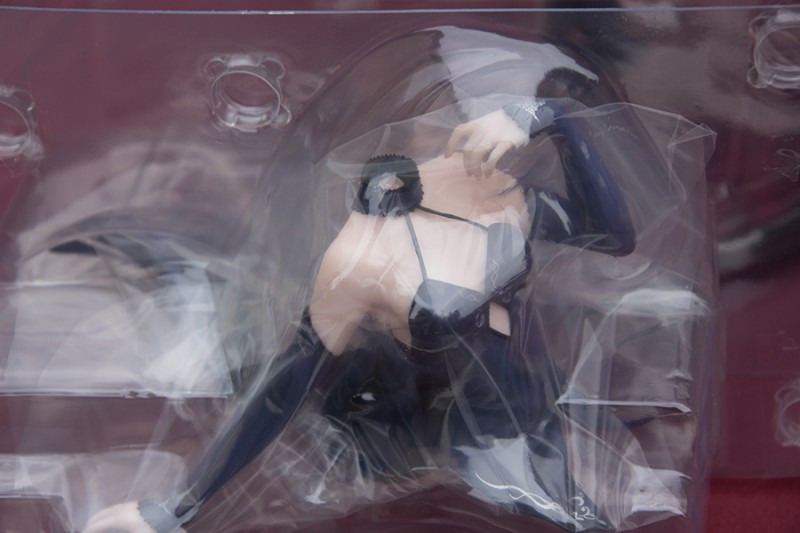 Then we can start working on the long, multi-layered skirt. Saber’s bust has to be removed in order to detach the skirt (practice also needed to swap the extra torso), which then comes off very easily. The inside of the skirt is provided with some protective material which has to be removed; the upper part is fully covered in clear plastic, while its inside is divided from Saber’s legs and hips with another sheet of clear plastic, this time a “softer” piece, which is also vaguely matte to the touch.

Once we have removed all the protective plastic, we can work on actually displaying the figure. For this unboxing I will use Saber’s standard pose as an example, but we will be able to explore the other display options at a later date in the review of the figure, publishing here soon.

The pose chosen in this example is the one where Saber wears her full dress, using the torso with the puff sleeves and without her sword in hard. On this note, the sword has a specific place to go in the base, which is provided with a small hole where its tip has to be placed, with the handle kept in place by the other extended arm (about which I will talk later in the review). 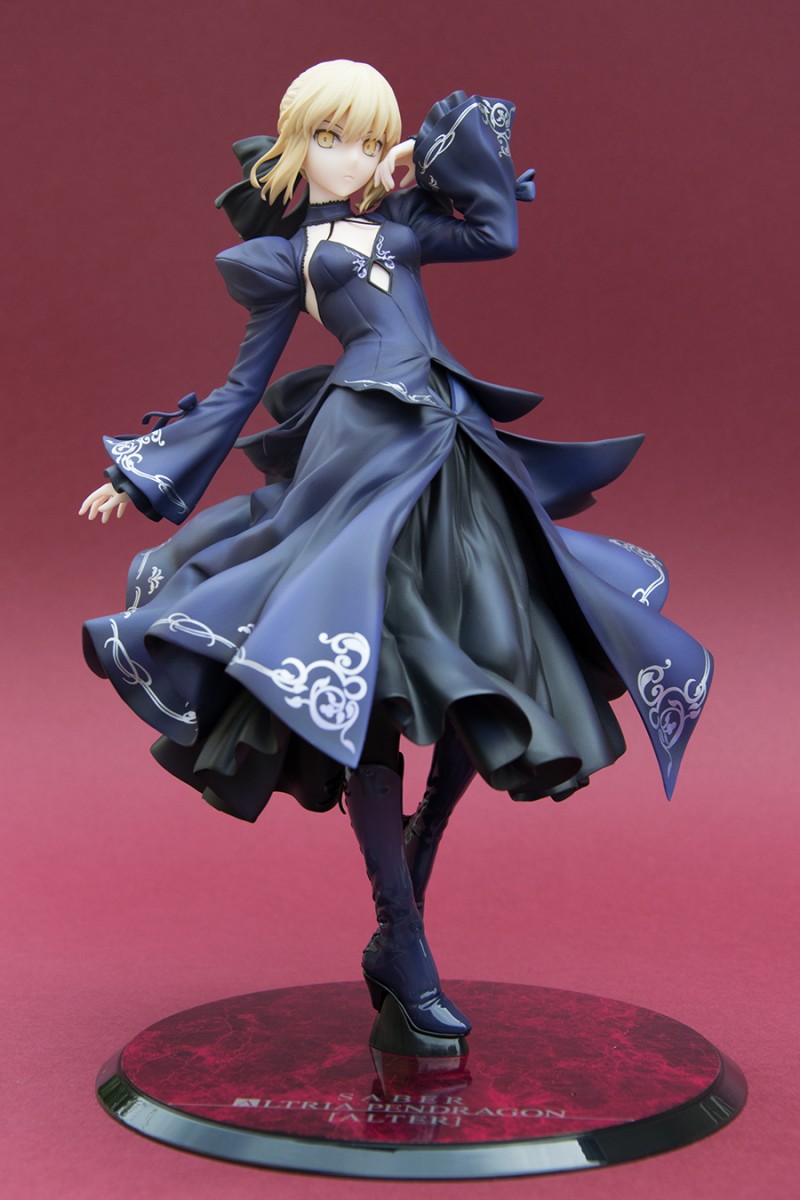 With the figure completely unassembled, the multi-layered skirt is the part which has to be put in place first. Then we can add the now headless torso, and then the head and the other arm. Now we are ready to place Saber on her base, to which the figure is secured with a single peg (made of a material which looks like steel or iron — in any case, it is not made of plastic) which goes in one of her feet. 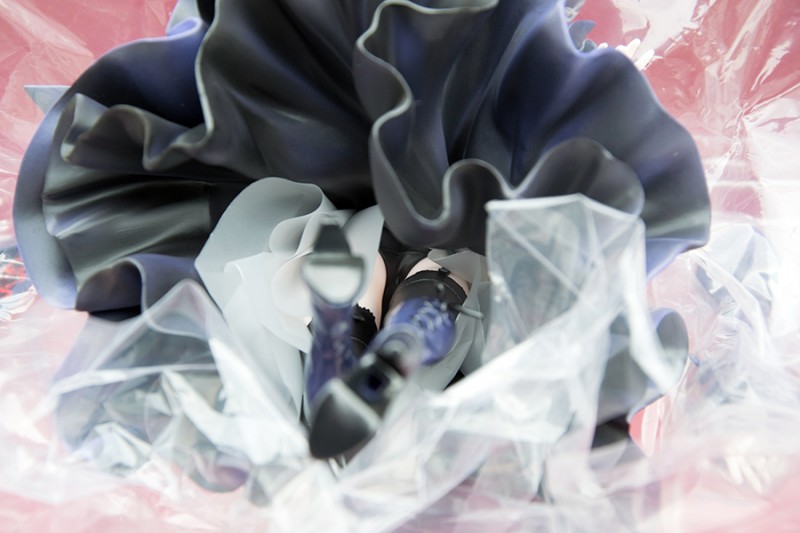 Some pressure has to be applied in order to be able to have Saber Alter Dress Ver. firmly placed on her base, though not too much. The key here is to find the right angle to make the peg fully fill the hole in Saber’s boot, and then purposefully yet gently apply pressure until the peg isn’t visible anymore and the boot heel is in the back part of the base support without any gap between Saber’s foot and the support. 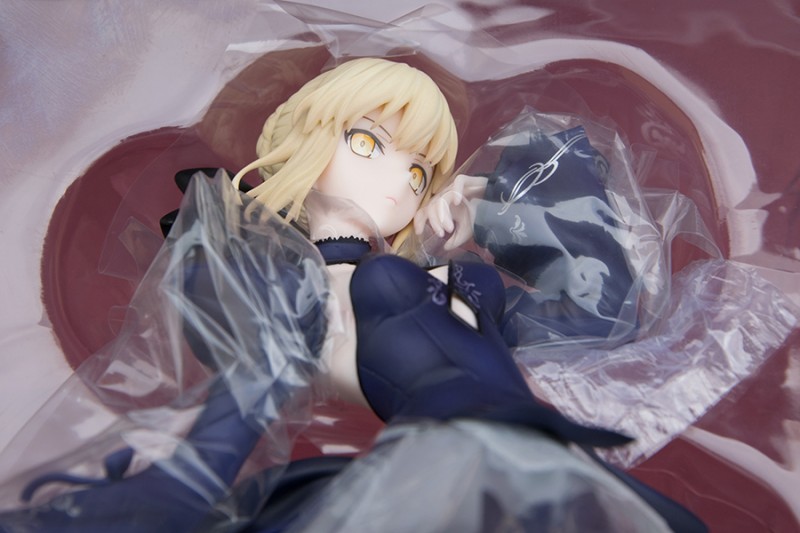 The very same process is true for the other display options, and we now can admire this quite stunning and detailed figure in all its details. That’s it for the unboxing of Saber Alter Dress. Ver. figure by Alter and, coming soon, is the full review of this interesting figure.