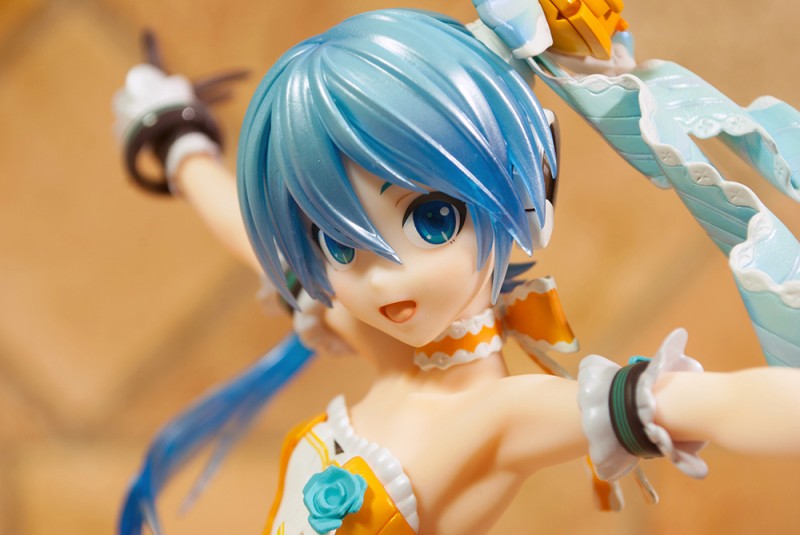 The figure comes in a lovely window box, provided with transparent plastic on two of its four sides, from where Miku can be spotted. The box has a rather “futuristic” appearance, which matches the style of the item it contains, and is definitely pleasing to the eyes.

Removing it from the box, we notice that the figure is carefully packed in a blister, which does its job well protecting Miku Orange Blossom ver. The assembly process is unbelievably simple and, although instructions are provided with this figure, they are not really needed.

All that is needed to have Miku ready for display is to remove the figure from the blister and place it on the base, to which the figure is fastened with two pegs, one short and made of plastic and part of the base, and the other longer and made of something similar to iron, which is the one actually keeping the figure in place.

The base is made of thin plastic of a solid pale yellow color, which looks quite weak and fragile. Personally, I’m not a fan of the style of the base, and I don’t quite like how thin it is. The base is decorated with some plastic stars strategically placed just around the little raised part where Miku’s foot goes.

Although the stars are well made, detailed, and also of different colors, they make the base look quite bare and too simple, especially compared to the intricate and very detailed design of the figure.

Now, this could have been done on purpose to better highlight the figure itself, but in my opinion an item like this deserves a better base, one detailed and eye-catching, and not something that looks more like a base I would expect to see in a prize figure.

Miku wears a lovely and quite colorful outfit, which also is rich with frills and is very detailed. The main colors of this figure are orange, light blue, and white with hints of black here and there. I think that this might as well be deemed as one of the best outfits I’ve seen Miku wear. 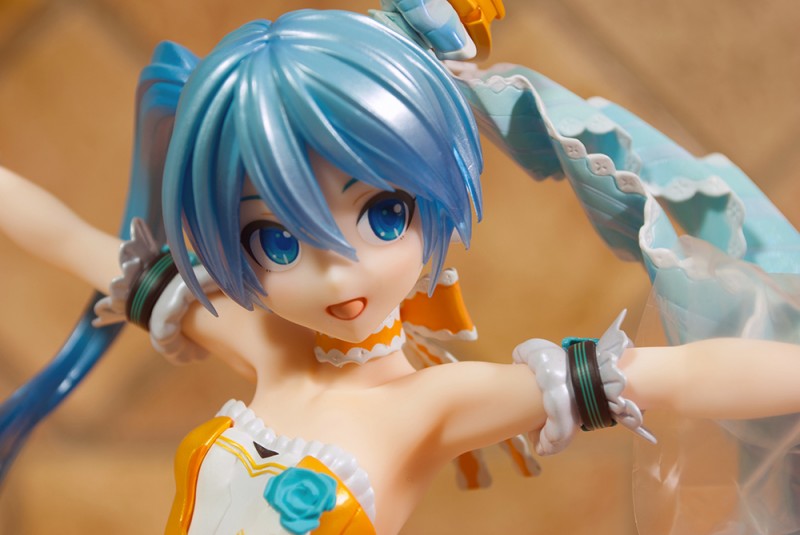 It is a pleasing mix of classic and futuristic styles, the former given by the frilly, multi-layered skirt and the various bows Miku wears at her waist and in her hair, and the latter empathized by her ankle boots and all the orange “accessories” placed on Miku’s ribbons.

The figure is very well made, and I couldn’t find any major, or worth mentioning, issue in the sculpt and in the paintwork as well. The only little issue is that it wobbles a lot, and the bigger light blue ribbon is very fragile, although it actually is made of a slightly softer material, supposedly precisely used to prevent any accidental damage that might occur when moving the figure around. 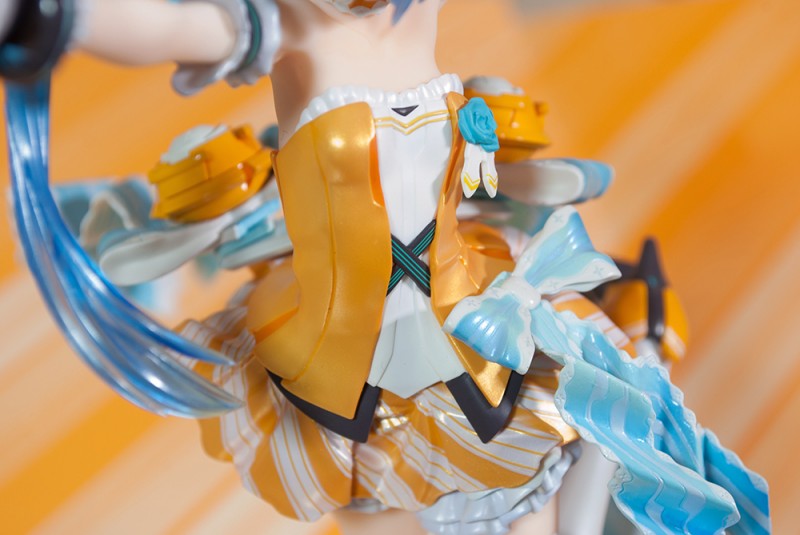 The paintwork on this figure is something spectacular and surely very eye-catching. I particularly like how many different finishes have been used for the painting of Miku Orange Blossom.

The outfit is mostly pearly or glossy, and the same applies to the hair, which in some parts also is semi-transparent. Miku’s fair skin looks smooth and almost real, and it is somehow able to stand out although it is of a rather light color. 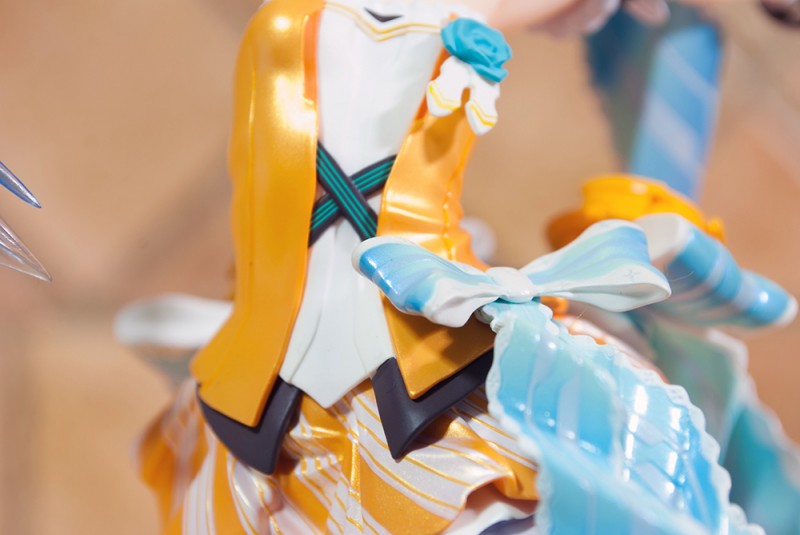 The few parts painted with a matte finish complete the beautiful artwork, balancing the whole figure’s appearance, and also composing a contrasting yet very pleasing combination of classic and modern styles, just like the sculpt does.

This figure is amazing as a whole, but that wouldn’t be possible if it wasn’t for Miku’s beautiful and expressive face. 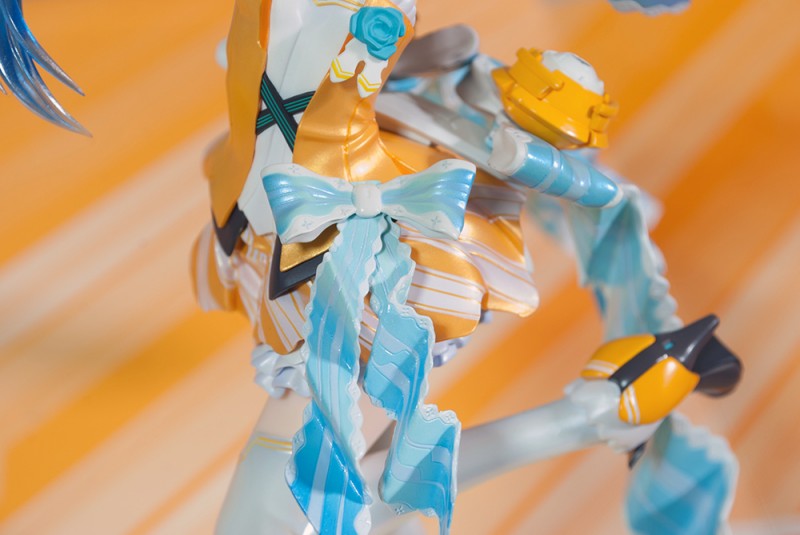 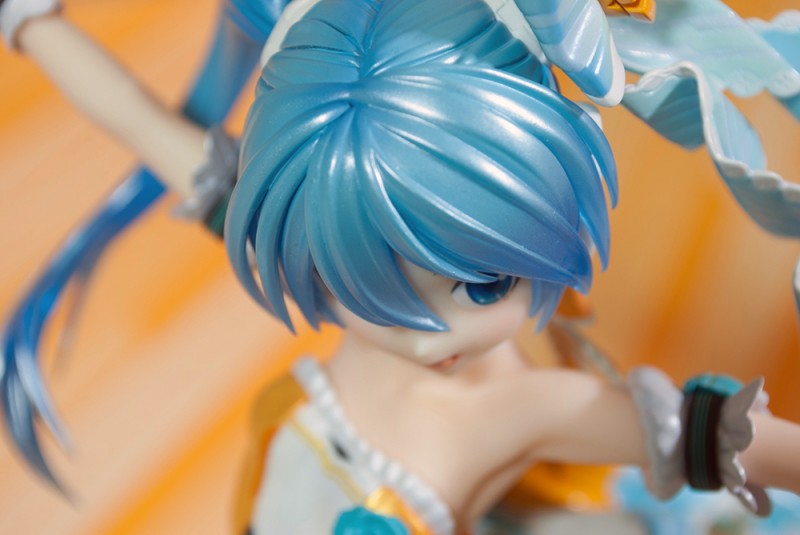 Surprisingly enough, and especially given all the attention to details and the amount applied, sublime paintwork, and masterfully done sculpt, the expression on Miku’s face is what makes this figure so pleasing to look at for me.

The eyes are as cheerful as the rest of the figure, and mix very well with the pose Miku has and with the character in general, which is supposed to be happy and also inspiring of happiness. 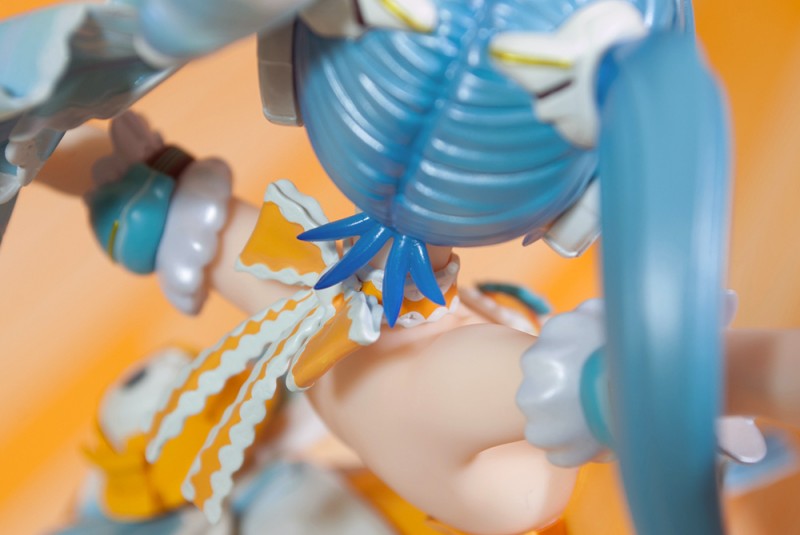 Hatsune Miku Orange Blossom ver. by Max Factory surely is a piece worth having in basically every collection, and is able to add a touch of happiness to every display, while perfectly portraying the source material and the popular Vocaloid. 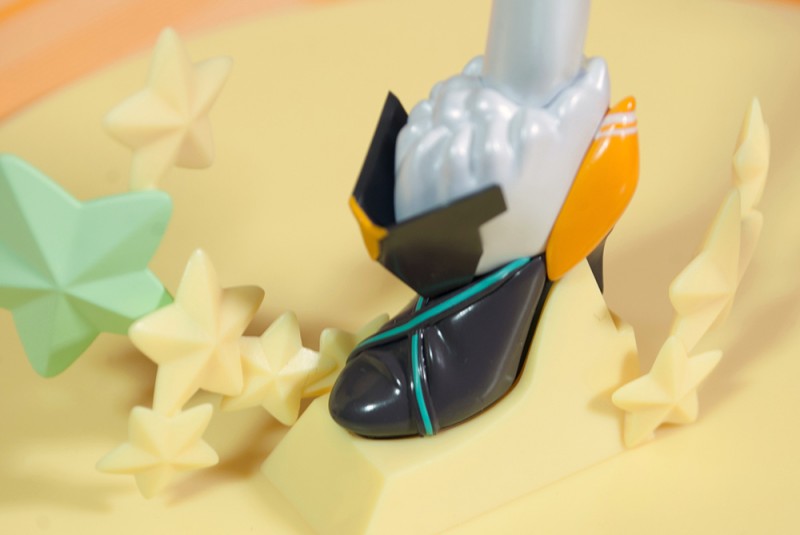 The figure not only meets, but actually surpasses, quality expectations one could have when talking about Max Factory, somehow also justifying the price tag which could seem a little unfriendly until one meets this beauty in person.