Back in my review of BP Taylor’s Eagle Fighter/Shuttle kit, I talked about lifting bodies and the notion of one thing carrying another into the air for some reason or other…

This is, rather unflatteringly, known as the ‘Parasite Aircraft Concept’ and is far older than one might imagine. Indeed, aircraft being launched by a larger carrier aircraft dates back to 1916, at which time the Royal Navy experimented with the launching of a Bristol Scout from a parent Felixstowe Porte flying boat.

In the case of the Felixstowe/Scout combination, the idea was that the scout fighter would only be launched to fend off enemy fighters – or strafe enemy shipping – were the mothership come under fire, as it spotted for German commercial or warships/submarines. In this case, of course there was no possibility of recovering the Bristol Scout, and the mothership would either land to pick up the pilot of the ditched fighter if the planes were out of range of the coast, or the fighter would be ordered to run for safe land ASAP.

The Flying Corps took this a stage further in 1918, when they equipped R23 class dirigible airships with a Sopwith Camel fighter. Towards the end of the war, with improvements to fighters as well as the development of higher flying fighters and incendiary rounds, the airships of both sides were becoming increasingly vulnerable. As with the earlier Navy experiment, the camel would be launched to fend off enemy fighters, though – as before – there was no capacity to recover the fighter on completion of its mission.

There and Back Again…

In the years between the wars, there were a number of experiments with parasite aircraft which ranged from the practical to the outright bizarre…

On the more rational side, the US Army began experimenting with fighter recovery from the airships in 1923, when Lt. Rex Stoner piloted his Sperry M1 and was successfully picked up in flight by a crane suspended from the Army Air Service blimp D-3.

This was further developed on moving rigid airships over the years until, in 1929, the US Navy felt that they had something of value with what they called the ‘trapeze launcher’ and attached it to the Navy ZR-3 USS Los Angeles. Using Vought UO-1 scouts, the trapeze was swung down to loosen the fighter and then, when recovery was called for, the fighter pilot hooked onto cables which were then drawn up to affix the plane back to the main rig – after which, the trapeze would be levered back onto the airship. 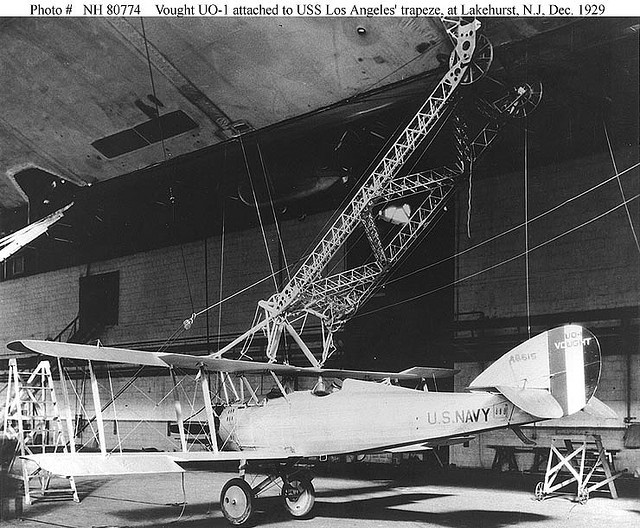 However, the US took matters a step further, creating what we might call flying aircraft carriers in the airships Akron and Macon.

These airships contained internal hangars for several fighter craft, which helped not only with the aerodynamics of the airship itself, but also with the safe loading/unloading and manning of the parasitic fighters. 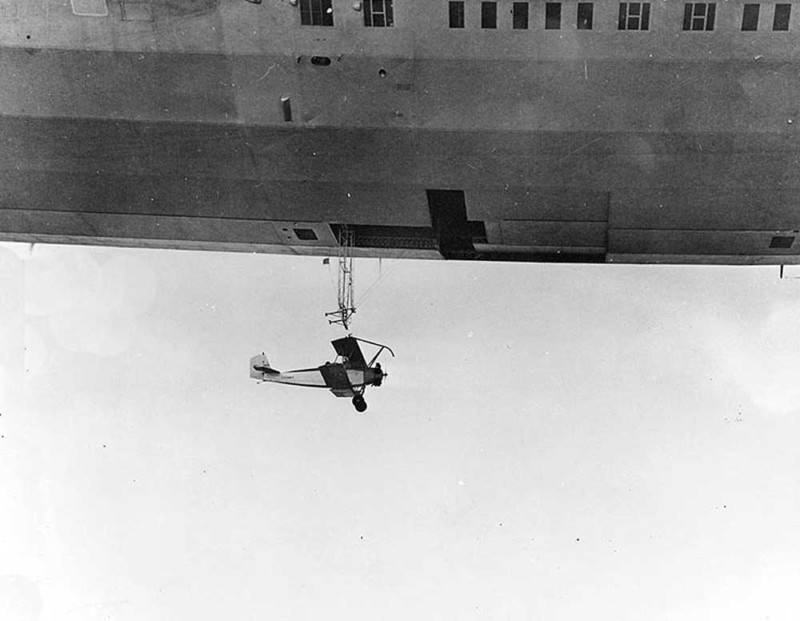 Even after the age of the airship was over, however, parasite aircraft concepts were not abandoned, though here is where we get into the weirder aspects of the concept.

For example, in 1931, Vladimir Sergeyevich Vakhmistrov of the Russian Air Force began experimenting with multicraft parasites, not only to provide top cover for heavy bombers, but also to assist in the takeoff of said bombers, when the lift and power of the parasitic fighters could aid in the take off of the whole. Once over the target zone, the fighters could be released to protect the bomber streams, and/or pursue their own mission objectives.

Further, as World War Two began, the Germans began working on their own designs, such as the Me 328, which was a jet fighter concept designed to ride on a carrier plane at patrol height, ready for deployment as needed.

The idea was rooted in the fact that any aircraft tends to use most of its fuel in getting up to operational altitude. When this fuel was increasingly rare jet fuel, it seemed to make sense to employ more readily available conventional avgas to get the jet fighter up to near its operating height. Though it failed, the notion of fuel conservancy survived the war and made its way into the US high altitude program, and even (via Gerry Anderson’s UFO) to surface in things like Spaceship One.

The Germans even revered the accepted parasite concept in a series of aircraft in which the parasitic fighter would be the ‘main’ aircraft, whilst the larger parent craft would be nothing more than a large, unmanned bomb. Using either tethered cable, dead reckoning or radio control, these flying bombs were to be flown to target locations, released, detonated, and the pilot would escape in the surviving fighter.

There were/are/will be no doubt many more such designs, but before I waffle on too much, let us get to the build…

Detailing is basic to say the least here, with not even basic detailing in the cockpit. I am told that the studio model of the same scale (for there were several, one of which was roughly 1/72) similarly had no real interiors. Still… I’d have liked to have seen crew figures, some basic molding, and some instrument decals. 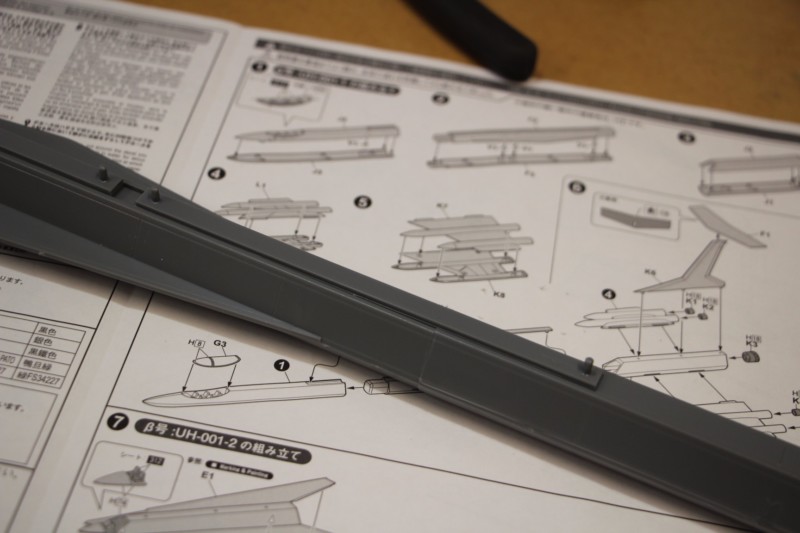 The mounting strips above are not glued in place, but can be swapped out with a plan panel, if you wish to display the three ships on their own instead of as a single unit.

I’m impressed with all the positive joints on this kit. No drooping parts once they are assembled and cemented. 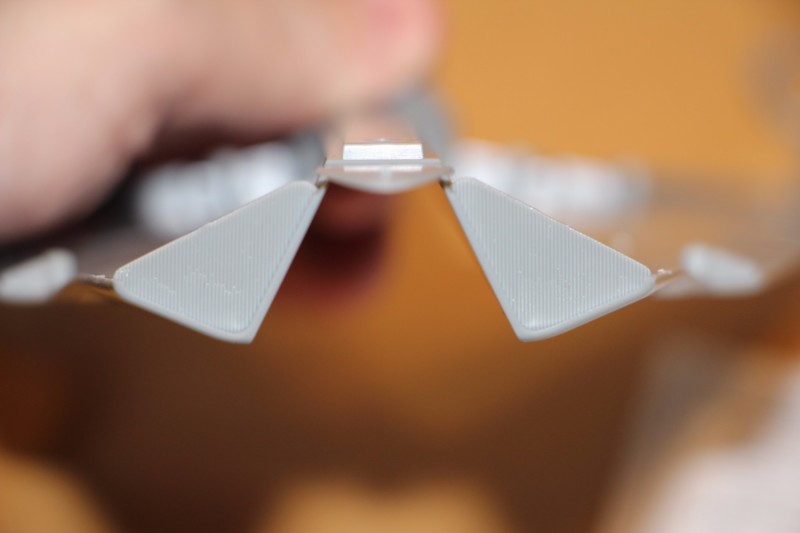 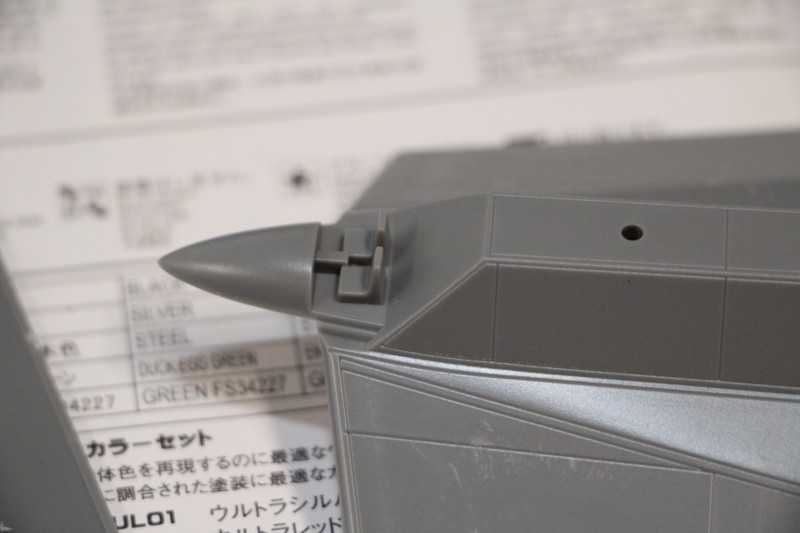 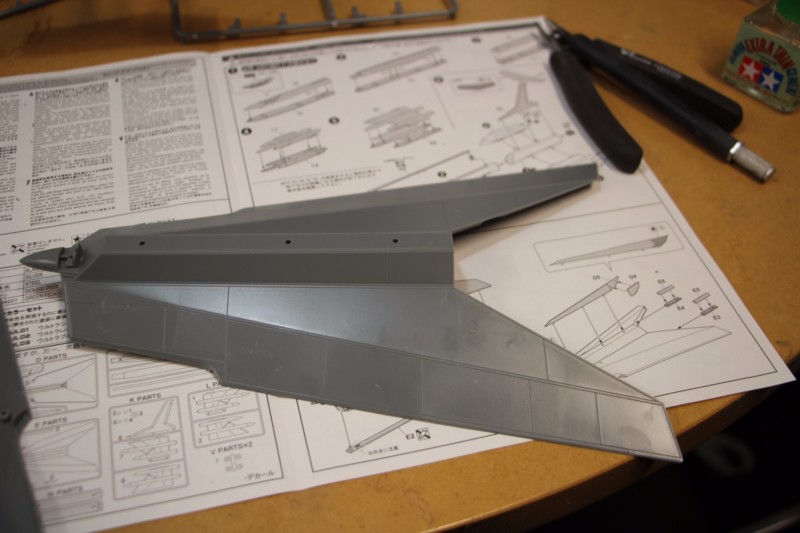 As on the prop version, the engine ports of UH-02 also provide the joints to UH-03.

In the end, I decided to paint in the rear blue panels, as I feared breaking the larger panels.

Needlessly, as it turned out, as the decals for this kit are rugged and slide easily for a good while.

CAVEAT: That is, they are rigged unless one puts some decal setter or softener on them, at which point they really turn to puddles… 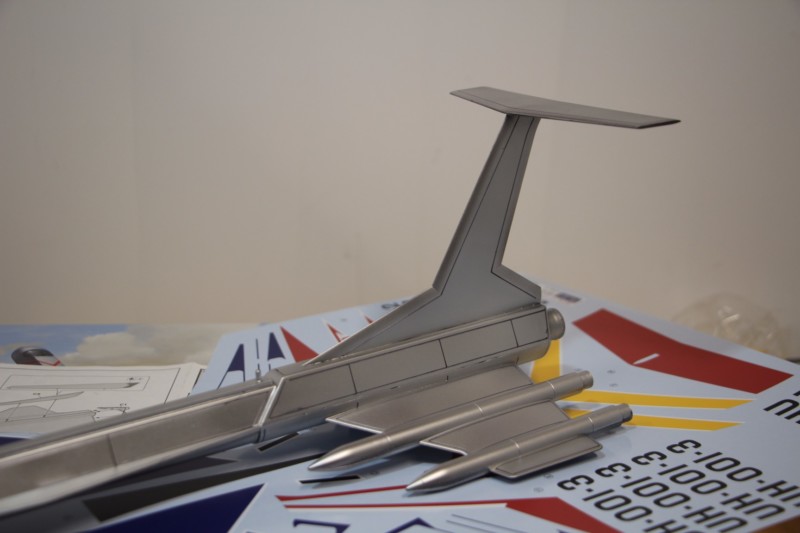 My name is Dr. Robodaz, and I am a Gundam Panel line pen abuser… 😉

Going over Alclad chrome (sprayed over black undercoat), these decals really were better than I expected, as long I did not try any funny stuff with them.

Even before the clear coat went down, the decals were proving their worth and almost vanishing into the body of the paint.

This may seem costly for such a basic kit, when you take into account the part count and general detailing.

However, I urge you to consider how big this thing is: approaching 50cm.

I am certainly not happy that Fujimi did not take the opportunity to add some cockpit detail to the kit, and think it would have been easy to do (same with flight crew). However, once the canopy is in place, this is less of an issue.

A greater concern is the lack of display stand(s), which puzzles me no end as the model has no landing gear for static display.

However, those issues aside, I cannot be displeased. My only other Ultra Hawk is tiny by comparison, and this kit fits very nicely into Fujimi’s recent return the Ultra Saga, with kits that support all the classic craft from that beloved franchise.