There has been something of a boom in moe anthropomorphism in both anime and models of late: Kantai Collecction, Strike Witches, MS Girls, Frame Arms and so on. One would be forgiven for thinking that this is all a brand new way of picking the pockets of increasingly character obsessed fans who have fascinations for multiple media, and pay good money for merchandise which crosses the boundary between one thing and another.

However, before this desire was formally recognized as profitable in media, the concept of the Mecha Girl (and, to a lesser degree, Mecha Boy) had been tootling around the fan community since the late 1970s and the garage kit boom.

It could be argued that the first mecha girls were not mecha as we know it, but WWII era aircraft, as crews of bombers especially tended to adopt the habit of painting elaborate nose art onto their planes, mirroring the ‘lucky charm’ effect of the, often feminine ship figureheads which were seen as essential to appease the spirits (or Spirit, for the Sea itself is considered divine in many seafaring cultures) of the seas in times past.

Both anthropomorphism, which is the attribution of human traits to nonhuman entities and personification, which is the application of human characteristics to more abstract concepts (such as ideals like freedom, or justice, and even to entities like nations, planets, and deities) are as old as humankind.

We still have no clear idea when such anthropomorphic notions developed in humanity – indeed, it is very possible that we will never know. However, what is known with reasonable certainty is that as early Human-kind looked out on their world they could not grasp much of it. Questions such as ‘what is that big glowing thing in the sky?’ or ‘What is that wet stuff falling out of the sky when that glowy thing gets lost?’ could not be reasonably answered rationally at this time – at least without reference to what was already known by the cultures in question.

It is not unreasonable for humanity to project onto the natural world (and especially the divine) ideas which are framed as human expressions of self, as it were, as this made it easier for even developed cultures (such as the Sumerians, Greeks, Romans – and even Otaku) to build their own legends and lore in such a way as they could easily be passed on, in a fashion which could be absorbed by all.

This is where gods come from of course: they are initially representations of the elementals, slowly evolving more human traits and desires as society becomes more sophisticated and comfortable with the notion of these great powers.

They become narrative representations of tribe and, later, state. They are vested with all the qualities which a particular group wishes to project into the world, so that they can be served up to any people the group encounters as the whole, made manifest.

In Japanese popular culture, I am told that there were some Moe-like anime artists and model makers working in the 1970s, but the earliest professional example of the ‘mecha girl’ I can find is in the work of Akitaka Mika, who began working in 1981 creating pictures of anime girls wearing mechanical elements – taken from various mobile suit types – in the pages of Gundam Ace Monthly. Inspired by the work of Sorayama Hajime, Akitaka’s initial aim was to create a series of moe characters which would make the Gundam Ace magazine more fan friendly, but it was not long before fans were beginning to adapt his work in 3D, as part of the garage kit boom in the later 1980s.

This not only served to increase Akitaka’s own popularity (resulting in art books dedicated to his own MS girls), but also in the recognition of the, admittedly, short-lived early days Mecha Girl craze of the time.

For a short while a number of companies not only produced garage kit versions of popular mechs, but a small number of mass market figures and models of hit series.

I myself own several Bandai Armored Lady models, which went on sale in the late ’80s, and are pictured below.

However, the first craze died back at the beginning of the ’90s, though Akitaka and the garage kit market kept it ticking over through the decade. Not to mention the way in which games like the Parodius series used several mecha characters to help take the mick out of Gradius…

It was not until the turn of the millennium that the「メッカ娘」’Mecha Musume’ (Mech Girl) began to make a comeback, with even the Japanese Self Defense Force creating characters to personify certain hardware.

Soon Japan began to see games with obviously mecha inspired characters, and this gave rise to series like Strike Witches, which paved the way for KanKolle and eventually to the closing of the Circle, with characters like the Super Fumina and the Gyanko making an appearance in the closing episodes of the second series of Gundam Build Fighters.

Here, I wanted – as always – to avoid the rather bulky stickers, and it was easy to paint in the detail, as Bandai has molded in good relief into the collar parts anyway.

Here is where the trouble began. With each joint being nothing more than a ball snapping into a styrene lock, the kit does not have the flexibility of a more mundane kit. However, I wonder if I have become so used to the poseability of the Kotobukiya Frame Arms Girls, that the limited mobility of the Gyanko seems a little off.

Mechanically, this jointing is well done, but I would really have liked more mobility… 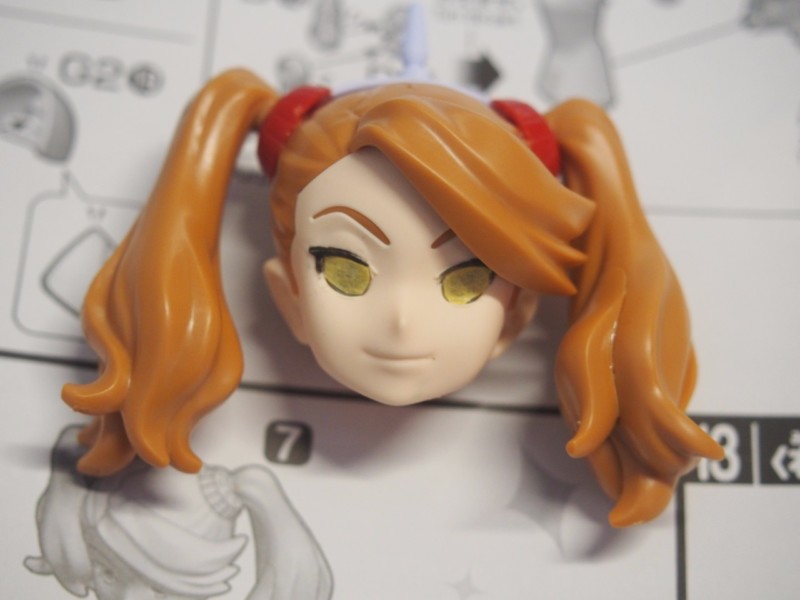 The eyes here are interesting.

The kit includes several eye blocks, each with different eye forms. One chooses one, applies stickers, or paints and inserts into the face. Moreover, if one opts to paint the eyes in, the model gives you two clear, glossy elements, so that the finished kit will have better looking peepers.

Note that the eyebrows are also inserts, not stickers. Not a huge touch, but a nice one. 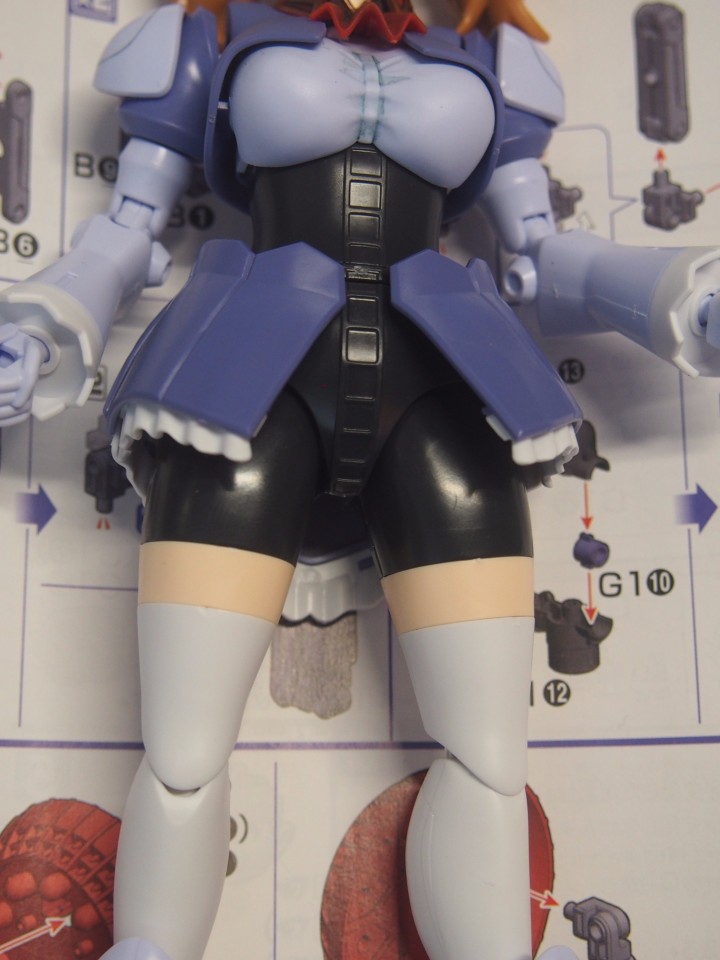 Overall, I had to do very little seam work on this kit, apart from cleaning around mold stems. The tolerances overall are very good.

The kit gives you far more parts for the shield arm than you need to make the basic form (and the basic stand), which allows you to add parts from the 1/144 MSG line of option parts, as well as the Build Fighter-specific packs. 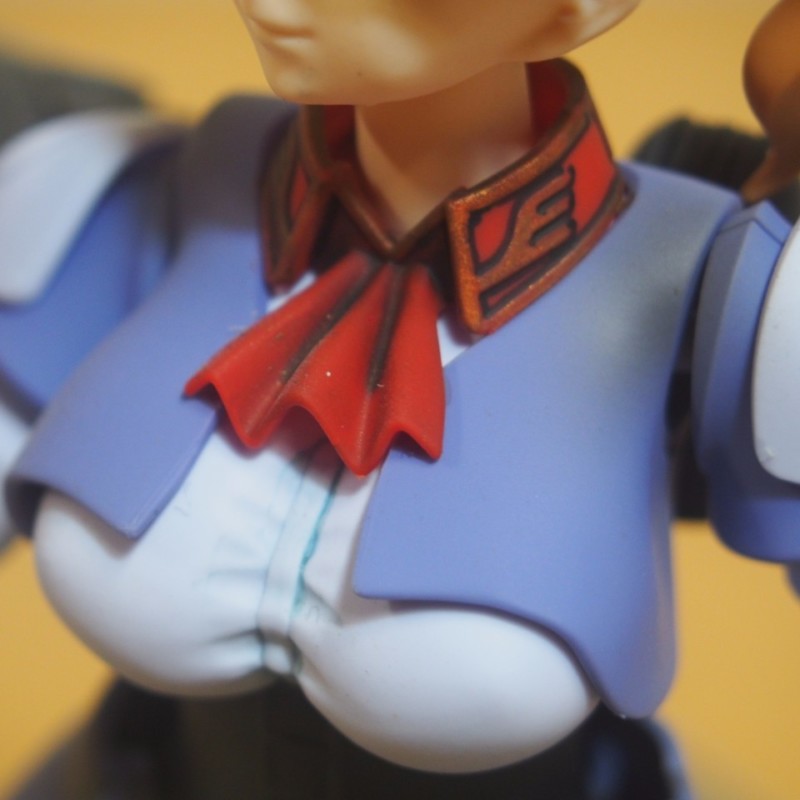 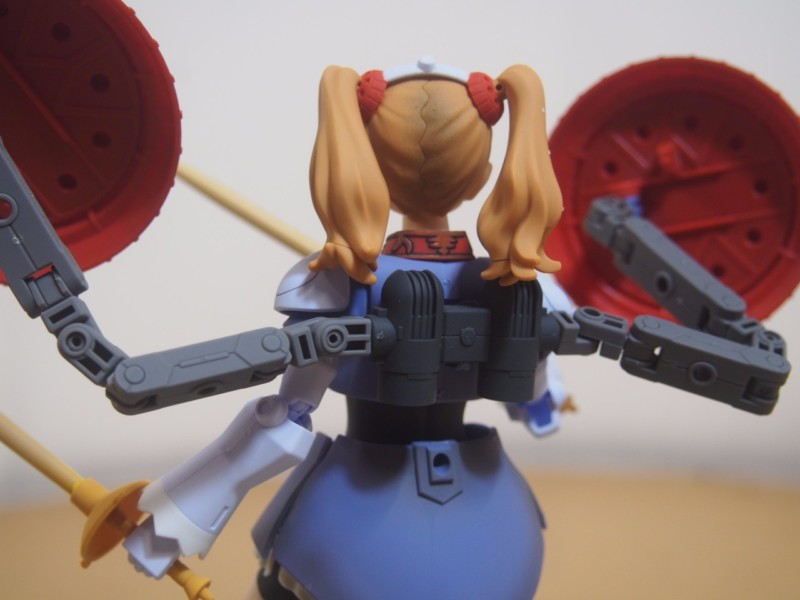 I’ve only done a little work on the kit, and am not sure if it needs any more washing and/or airbrushing than this.

It certainly looks as good as any of my Frame Arm Girls (though perhaps not as swish as my KOS-MOS), and should certainly have some appeal to Moe builders, even if they are not Build Fighter fans.

Good kit, well priced,and with some real eye catch. I hope this line can break out of Build Fighter and Bandai serve us up some other Mobile Suit girls along the same lines.