Both kits available from HobbyLink Japan: Stig & Ray and Blowsperior

As mentioned in the first part of this review, no matter how appealing (and they are appealing) the Legios fighter and Tread were in this series, it was the free-wheeling, bad-to-the-bone ride armors which really took the audience by surprise – combining the increasingly common trope of ‘transforming mecha’ with an almost age-old, yet often unmined concept, the powered armor suit.

The result, as we all know, was legend…

Power armor is something of a common SF trope now – in games, film, and other forms of media.

From Warhammer 40,000‘s Adeptus Astartes, through the ubiquitous Ironman, to more interesting, even unintentional offerings, such as the Aliens powerloader, the concept of powered armor or exo frames are almost commonplace in form, but it was not always so – and their history is older than one might imagine, and closer to reality than their fictional founders could have ever imagined.

Though a surface Google search might present the reader with Robert Heinlein‘s award winning novel, Starship Troopers, in which power armor-clad Mobile Infantry wage both war against the alien ‘arachnid threat’ and serve to satirize the arms race of the time of writing, as well as Heinlein’s fears concerning creeping racism.

However, though Heinlein’s work certainly threw the medieval knight into the future of the popular imagination, combined it with the still crude EVA suits of the US/Soviet space program, and lit the fuse on a cultural phenomenon which still burns bright, there were earlier examples.

Indeed, and unless someone can point out an earlier example, the first time I encountered power armor was in the Lensman series of novels by Edward Elmer Smith in which members of the Galactic Patrol possess strength amplifying suits among their weaponry.

Though Smith does not make his power suits the center of his narrative the way in which Heinlein and his successors have done (especially so in series like Mobile Suit Gundam – if one comes down on the side of the debate which sees Mobile suits as armor, rather than vehicles), they are seamlessly – or as seamlessly as Smith’s rather stilted prose admits – blended into the overall world of Lensman that it seemed real.

And, in a way, of course that was the point.

After all, just as the Space Operas of Smith’s era were little more (though it is a very BIG ‘little’) than horse operas and European folkloric/chivalric tales projected into the future, so too was the technology of those narratives. It was logical that the Knights of the Outer Frontier would have their technological analog for the plate, chain, and leather harnesses of old.

It is this aesthetic from which Shinji Aramaki drew when creating his own power armored troops which would be the heart of the Mospeada narrative.

A cross between Robin Hood and the quest for the Holy Grail, the knights errant of this series did not just ride their steeds into battle in the conventional sense, but became a composite heroic character who the viewer could believe capable of tackling the larger (and, sadly largely overlooked model-wise) Inbit troops.

These Aoshima kits are, as you will know, re-releases of the old Imai kits, from the time of the original series.

However, despite the box art of the Aoshima run clearly being derived from the Imai 1/15 scale kits, it seems that that the actual kits are based on the later Gakken 1/12 variable models of the mid ’80s.

I’ve never even seen kits other than the Imai 1/15 scale versions, so cannot tell what, if anything, has been updated (apart from the decals which I know to have been revised, if only materially). However, as we shall see, IF Aoshima has done anything other than put the old molds back into service, they did not do much, for these are clunky kits indeed – though not bad by any stretch of the imagination. 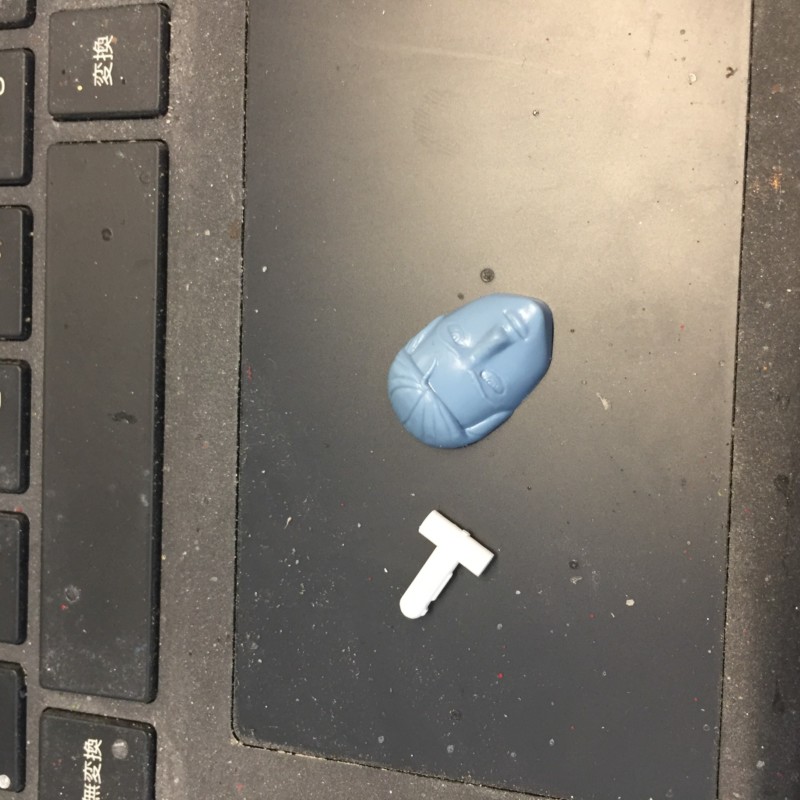 Though I should, I will not be tinting the canopy on this one, as I am not confident in such matters, and I do not wish to deepen it and obscure the face. 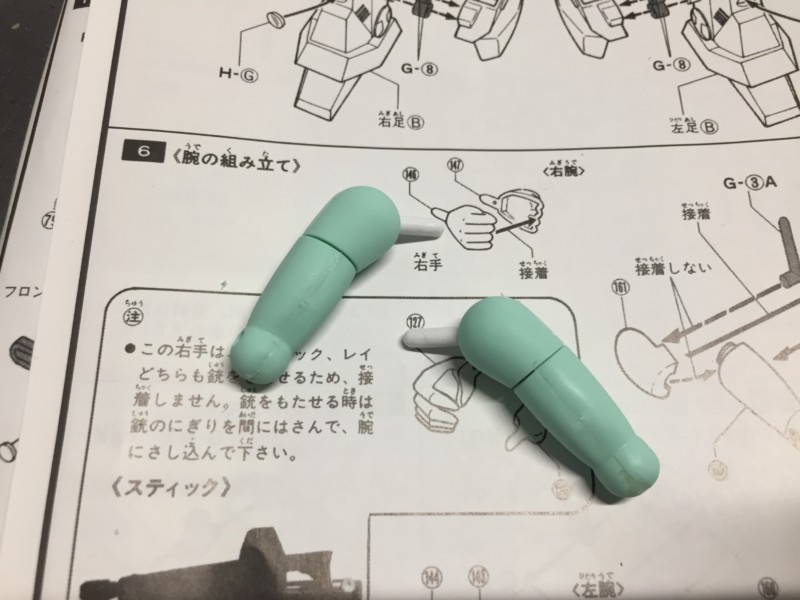 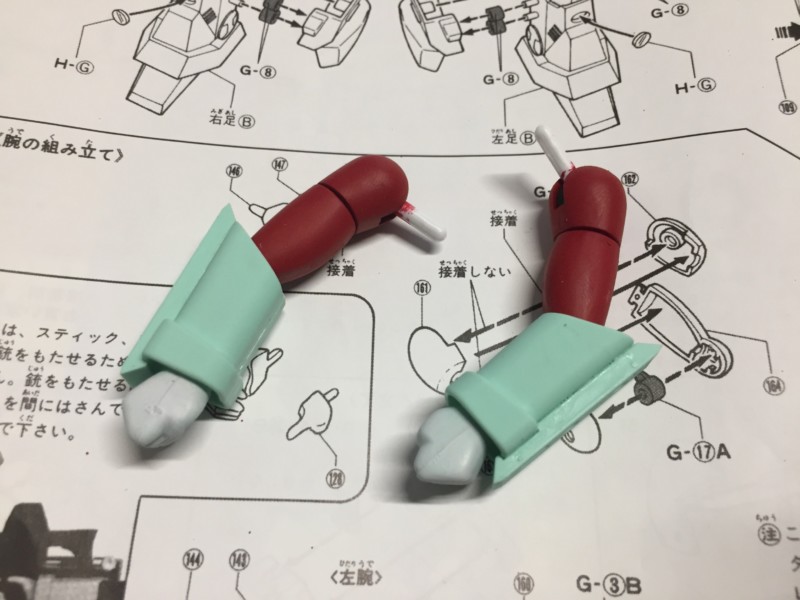 Very 80s. Simple and direct. Good fit overall, and with no warped pieces, but having become used to pre-colored parts, I’m a little out of habit in actually color matching.

Also I am still addicted to Gundam pens…

The Ride armor is technically transformable, but is very fragile indeed. I broke an element of this armor sleeve within seconds of assembly, so I will make up Stig in his powered armor version, and Yellow’s Blowsperior (yes… I know it should be ‘Brough Superior’, and I know Aramaki-san’s English was not perfect. However, in a world in which anime fans still stick to naming Verdandy as ‘Belldandy’, just suck it up as a cultural artefact… 😉 ) in the cycle form.

Brush skills… After so much time with an airbrush, I really need to get back into practice. 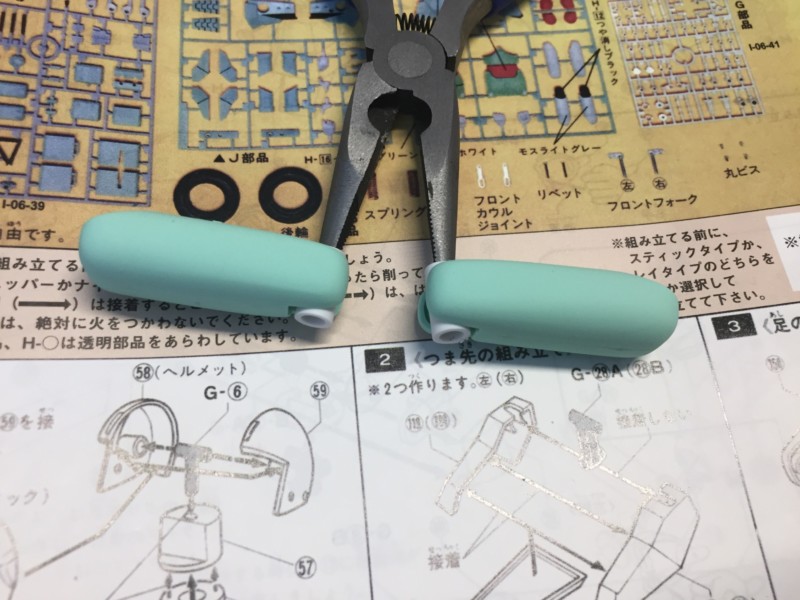 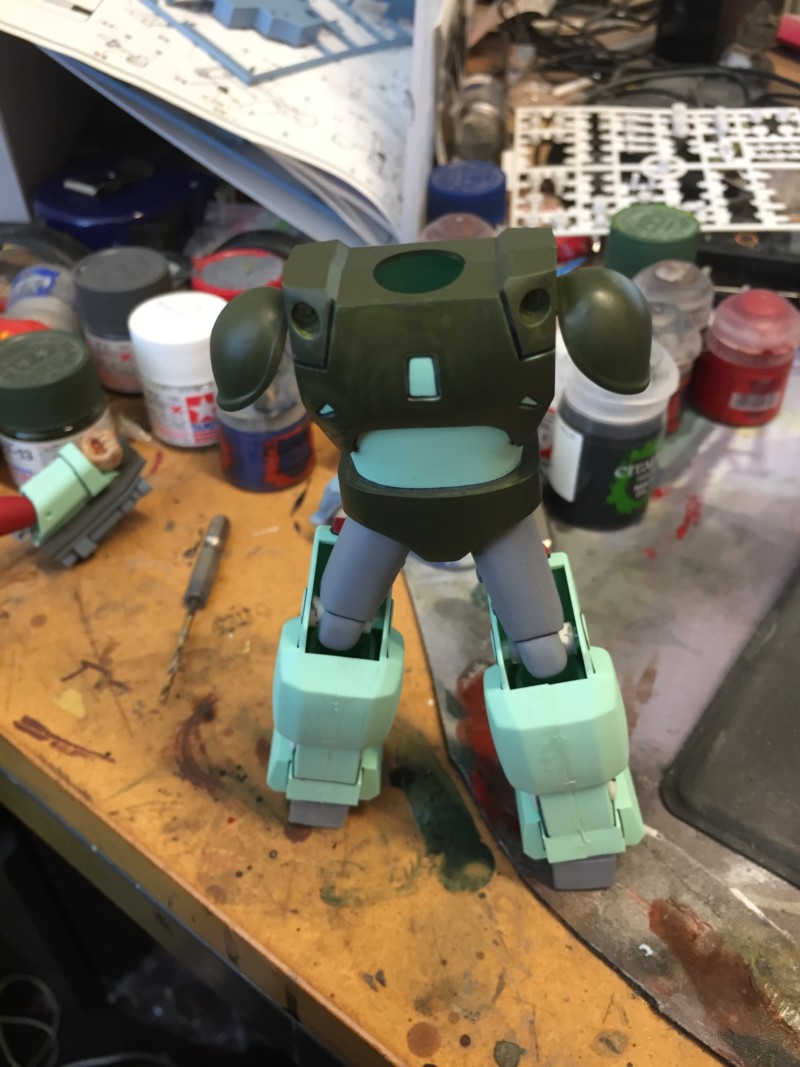 This is one component of the original design I adored: the wheel hubs popping out and taking on the role of thrusters.

This time out, I went for a matte military look. Weathered down, it looks pretty good. 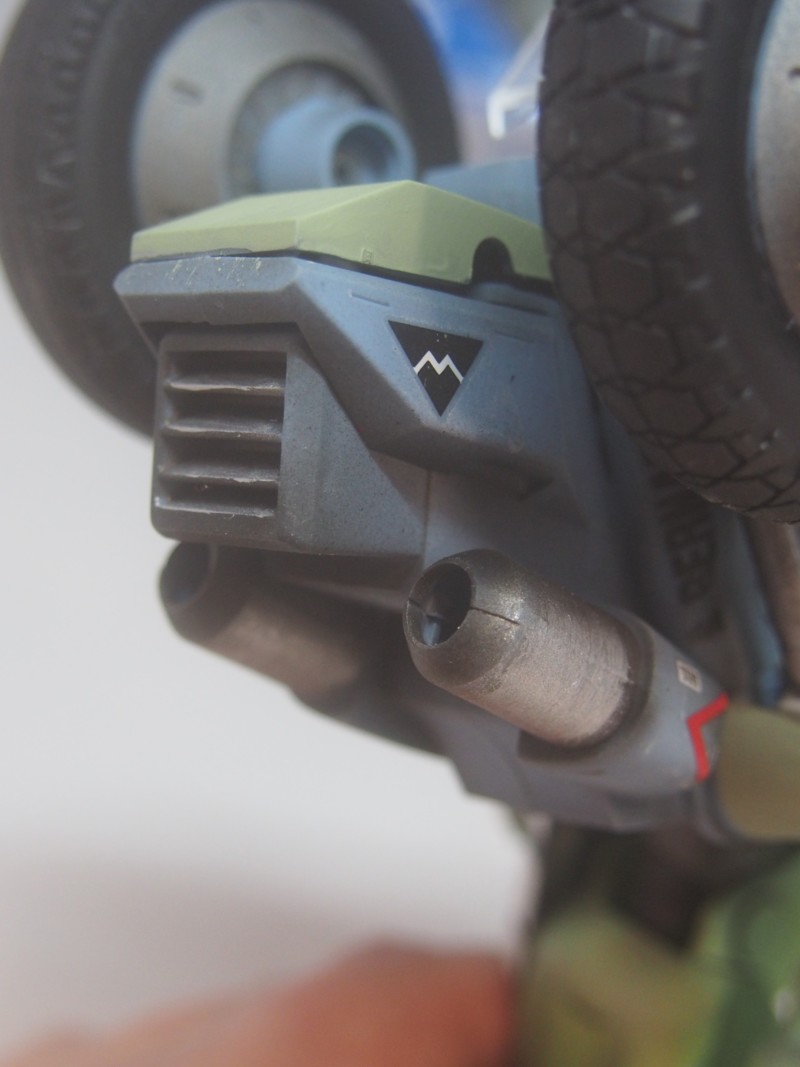 With the visor up on this build, I thought I’d have a crack at tinting… Not too bad, but I still need to spend more time on flow control.

This time, no errors. All parts pre-sprayed. 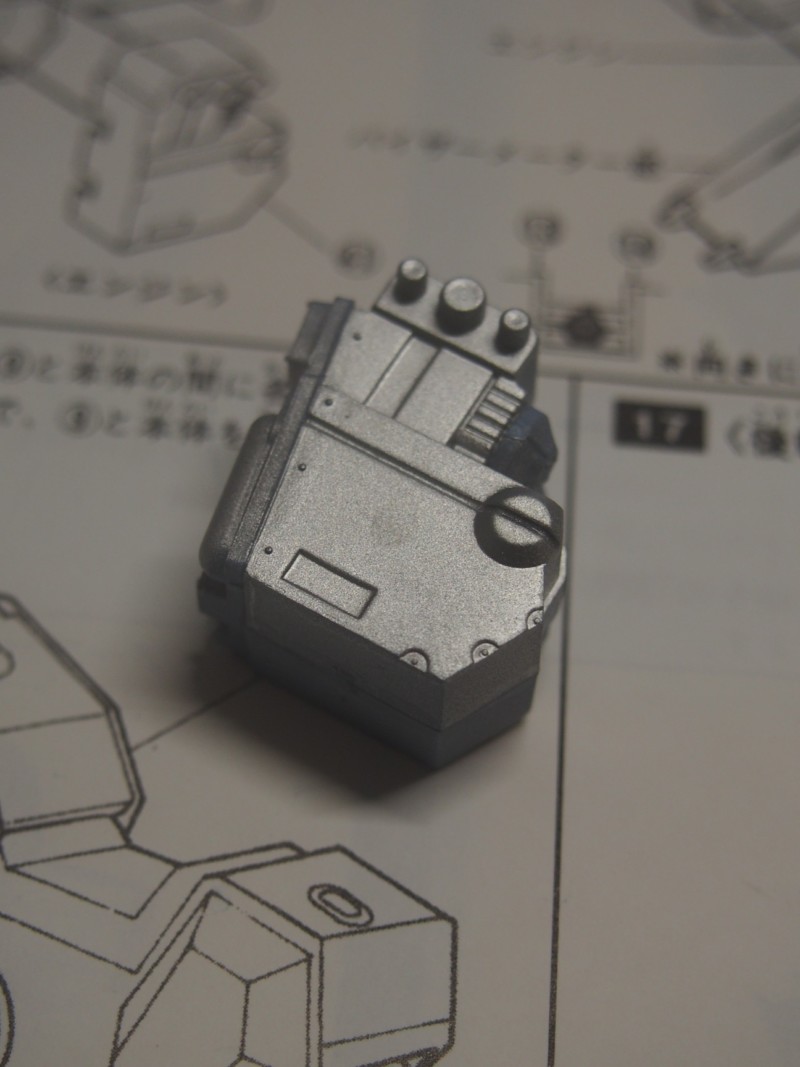 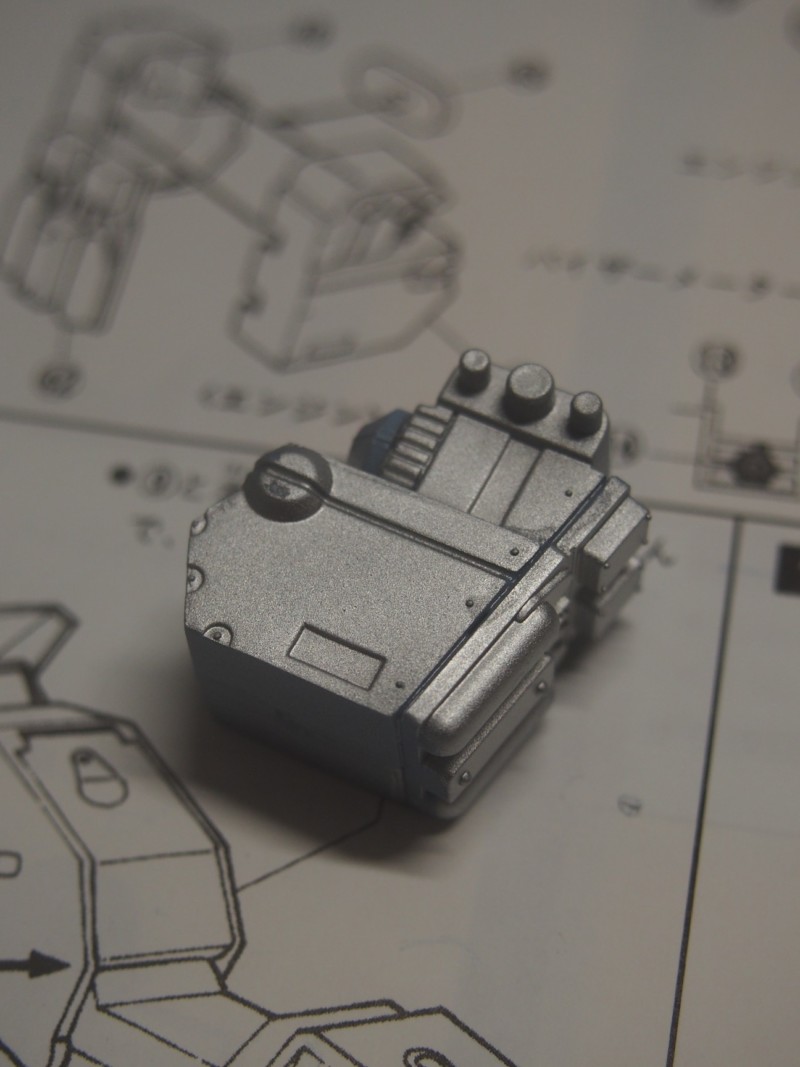 Now, time for a little touching up.

Gloss coat this time, for a little racing feel. 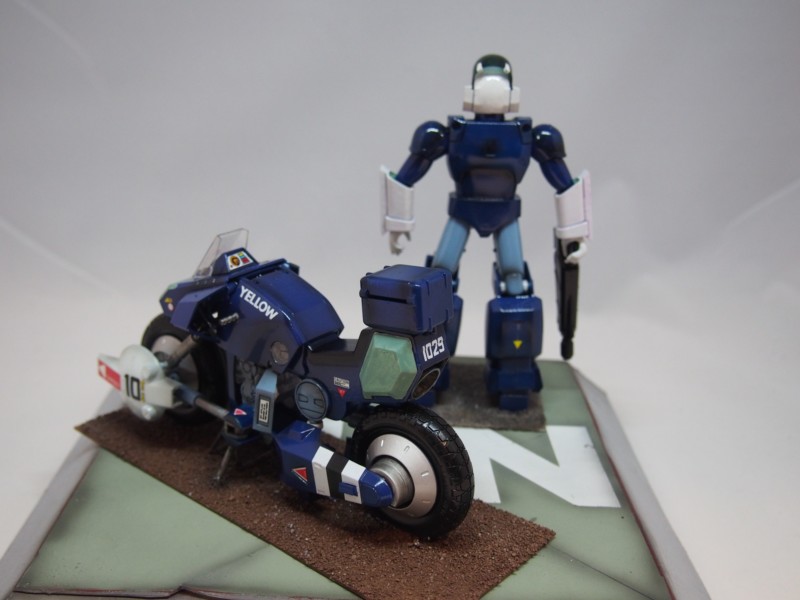 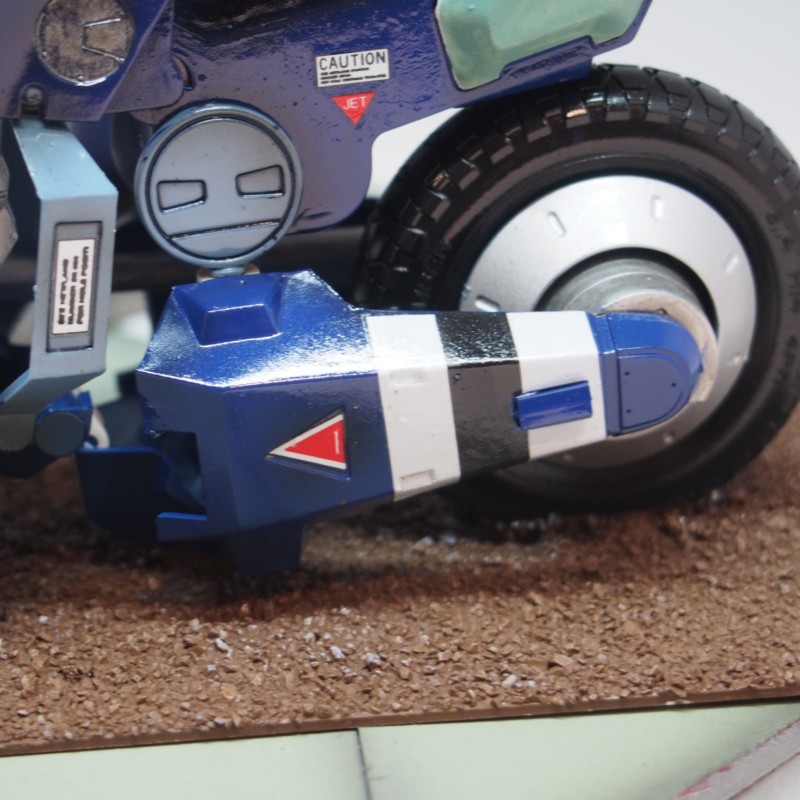 If you like Mospeada there’s not much game in town model wise, that is for sure. Perhaps the market is not large enough for Aoshima to warrant having new molds cut (an expensive business), so I cannot gripe too much about the idiosyncrasies of these new/old kits. Certainly they are not what the market has come to expect in build, but I will warrant that if you are attracted to them in the first place, you probably are like myself – a bit of an Oldtype for whom the Ride Armor signifies one of those mech-staligia moments from childhood.

Pros: Finally, the 1/12 Ride Armors are available again at a sane price. They are taken directly from the original molds. Updated decals. Improved styrene.

Cons: Same molds (yes, I know that is listed it as a Pro, but it can be argued both ways). ‘Allegedly’ transformable – if you want to mess up your paintwork each time you do it…

I don’t like number ratings so much these days. All I will say here is that for Mospeada fans, you can’t go wrong if you want a decent sized model, rather than a toy.