On May 26th, Lindsay, David, and Anna from the hobbylink.tv crew sat down to lunch at the Good Smile x Animate cafe in Akihabara, Tokyo, for a Cowboy Bebop-themed experience! The cafe was created to commemorate the 20th anniversary of the classic space western, very much beloved by fans all over the world, including our crew. Cafes like these come and go quickly — they’re called “pop up cafes” — so we made the trek down from Tochigi while we still could!


Compared to other anime cafes, the look this time was rather adult and subdued, owing perhaps both to the style of the anime and the demographic audience attending such an event. Waitstaff was in uniform, not cosplay, and while plenty of artwork, cutouts, and wall scrolls were on display, the setting was chic, not hokey.

The tables were set with character-themed place mats (we got Spike and Jet at our table), and the cafe was playing the show’s soundtrack, much to our delight.

After getting a ticket from the shop in advance, diners were led inside in time slot-based groups, where all were seated and read the cafe rules (which were also provided in English and Chinese, and a few other languages if memory serves!).

Once the rules were read, customers began turning in menu cards with their orders, and our drinks from the cocktail menu came out quickly! 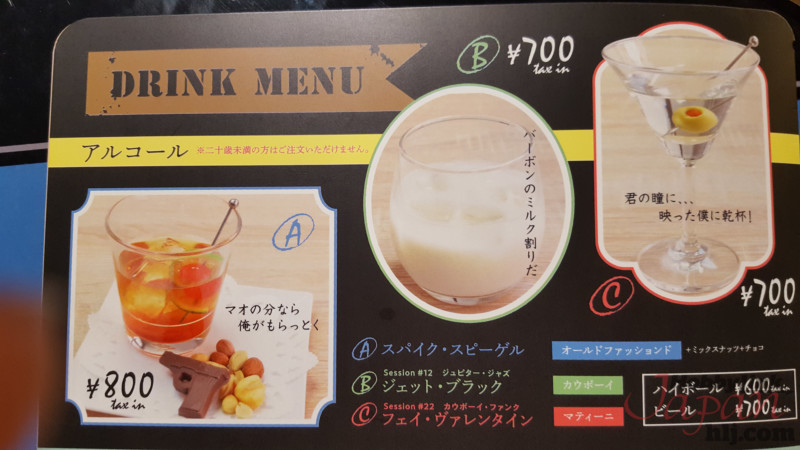 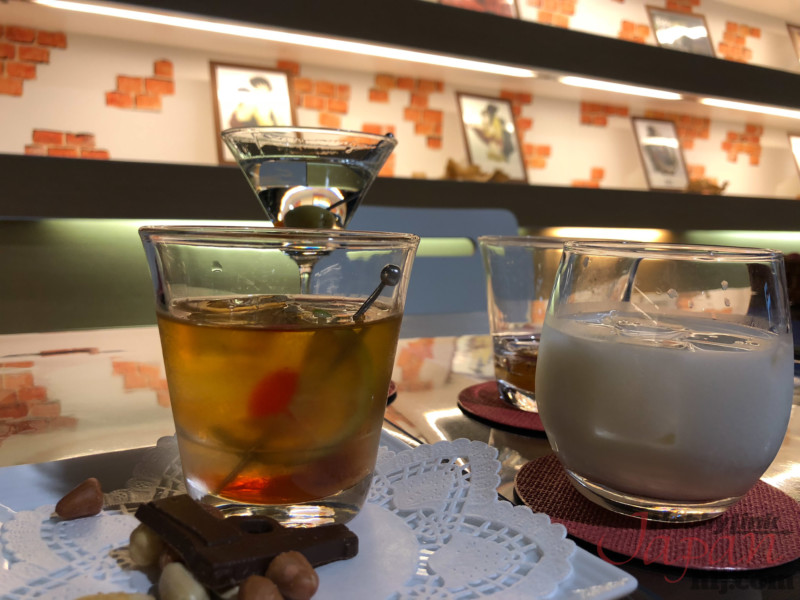 An old fashioned named after the main character. We sometimes see Spike drinking similar drinks (or perhaps simple whisky on the rocks) in the show.

A cowboy — a cocktail Jet’s seen ordering at one point in the show.

A simple martini which Faye orders at one point in the show as well. 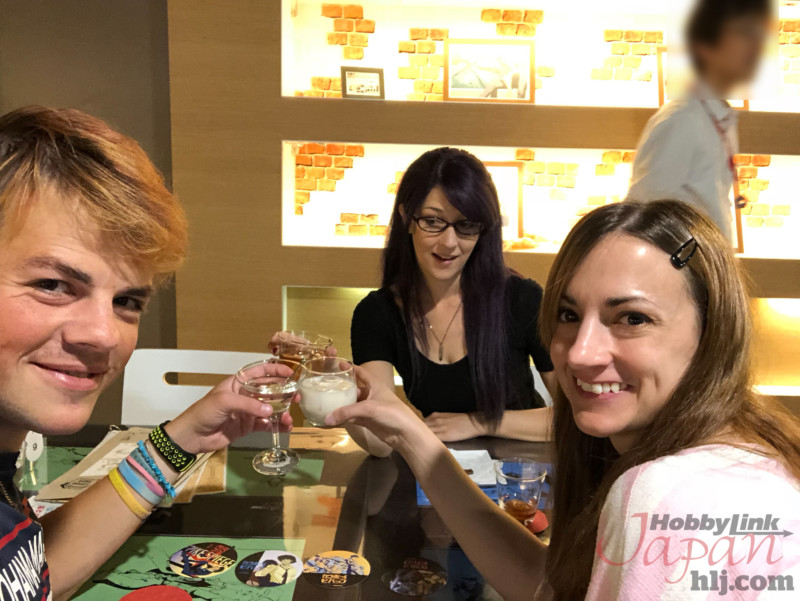 …They were quite strong! 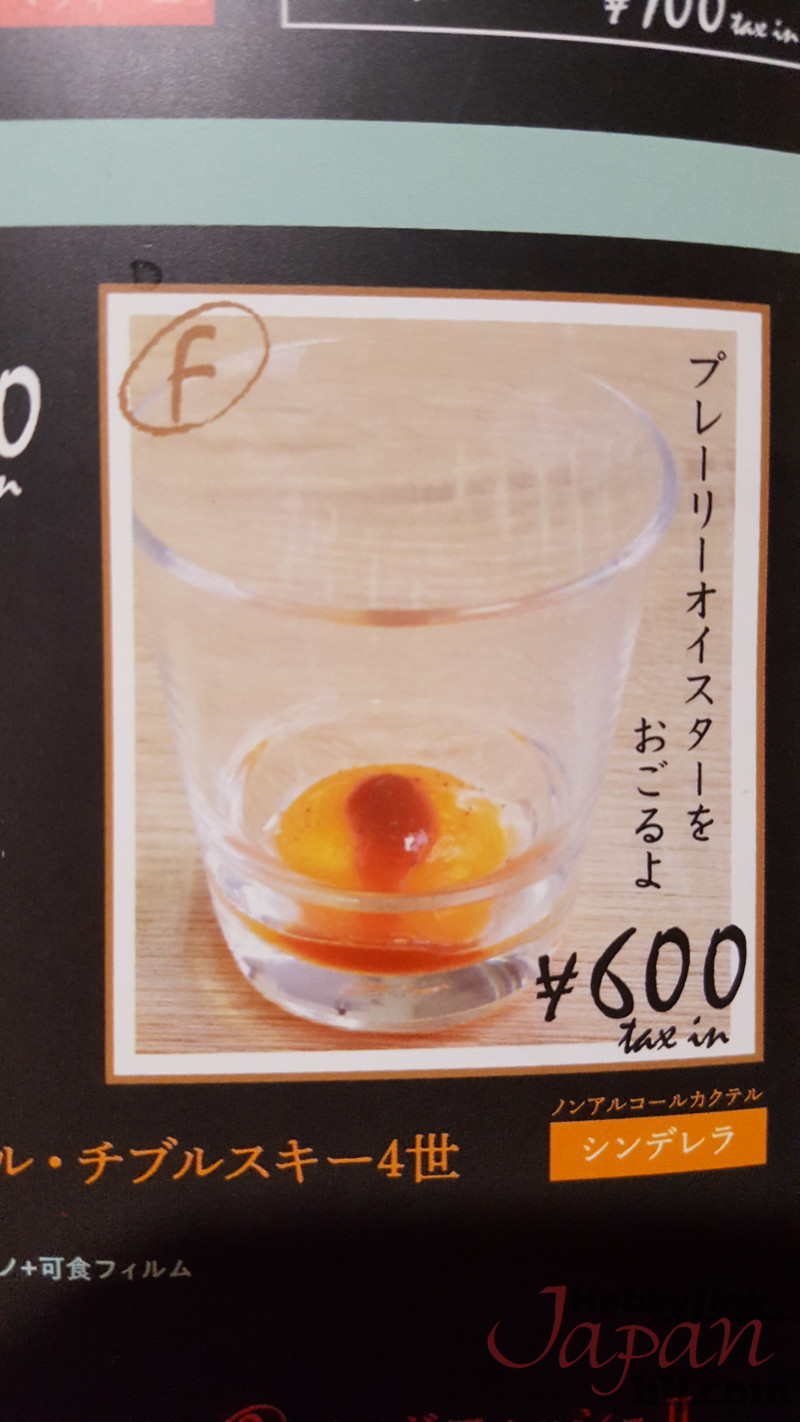 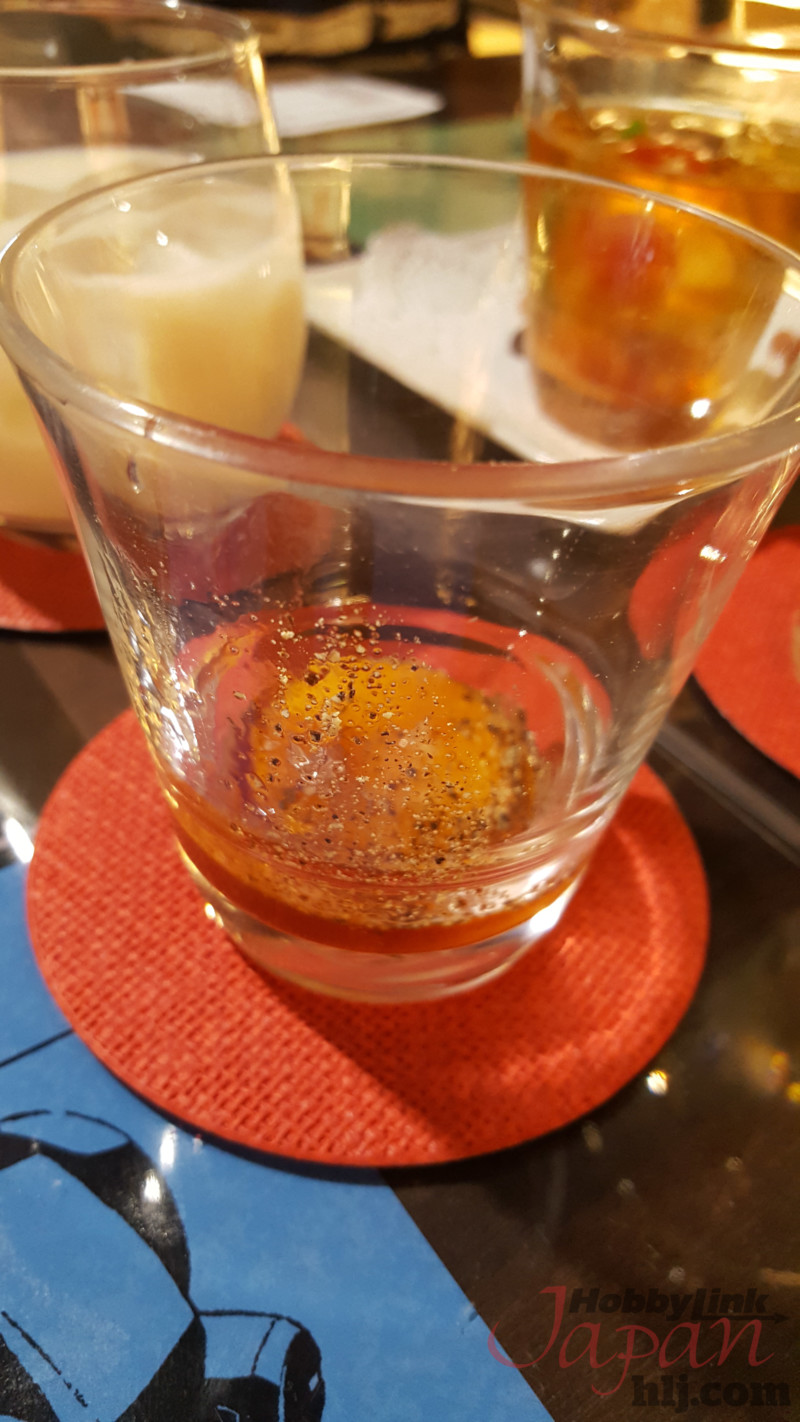 A raw egg yolk in a glass with a few seasonings — something Spike introduces us to in the show as his hangover cure.

David was a champ and took it for the team. He describes the taste as “very eggy” — not bad!

Next, while waiting for our food, we took a stroll around the cafe. 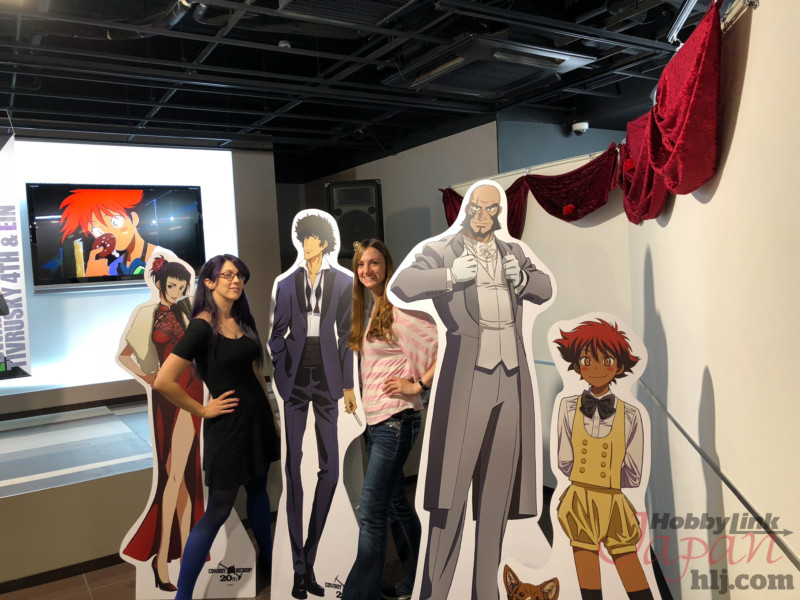 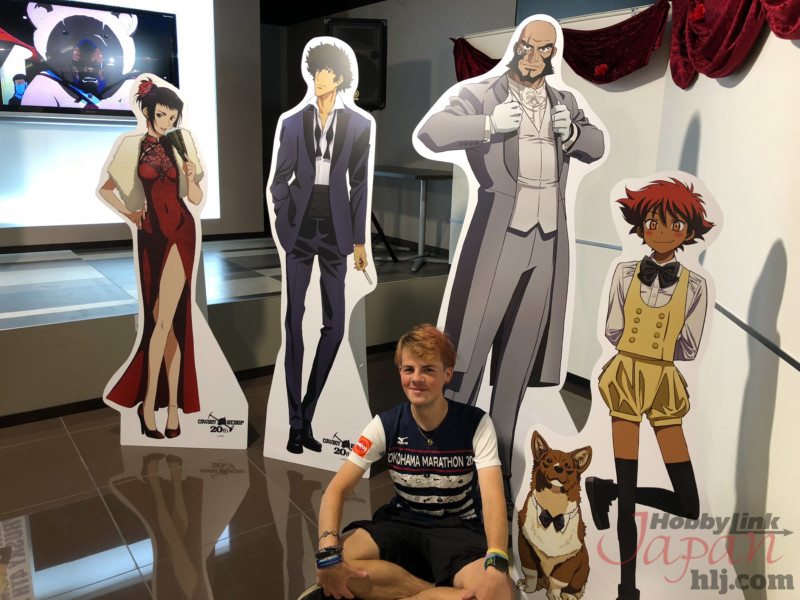 One of the nicest touches to the atmosphere of the cafe was a series of artwork from the show arranged neatly on shelves around the dining area. We took some photos of our favorites. 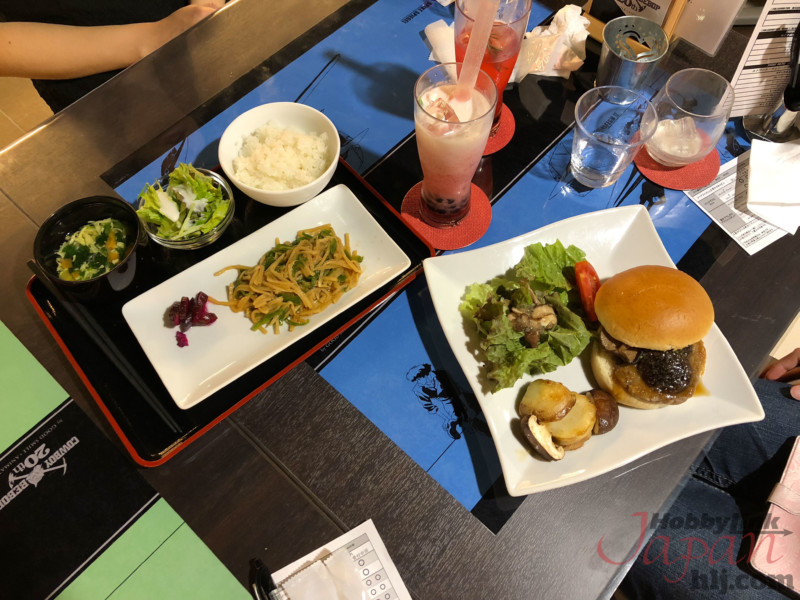 We headed back to the table and it wasn’t long before our food started arriving! We’ve included photos of the dishes we ordered below, but are also covering the menu items that reference the show. (There were some normal dishes on the menu, like tea, coffee, and small side dishes, for anyone who wanted something beyond what the themed menu had to offer.) 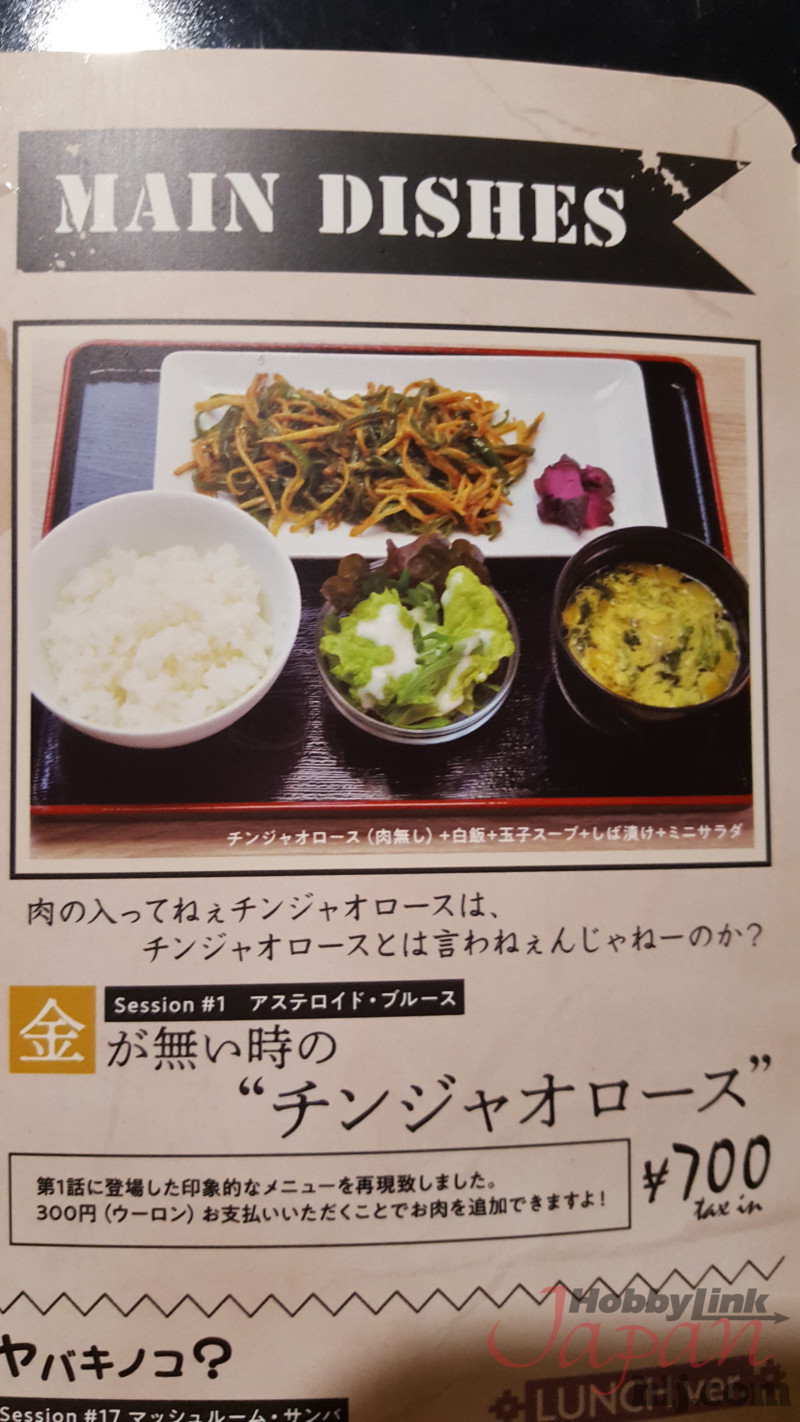 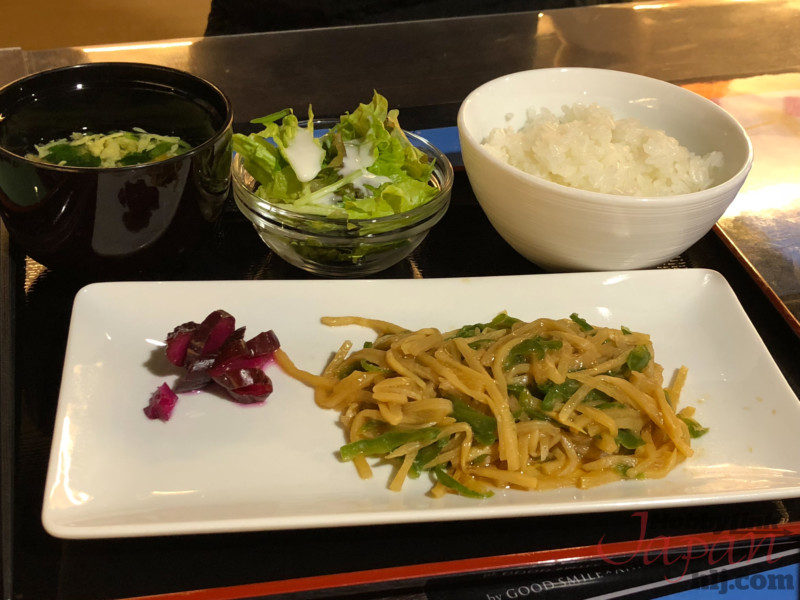 This is the sort of dish we often see the Bebop crew eating when they’re low on funds, made by Jet. It came with an option to add meat for an extra charge, but yours truly, the vegetarian of the group, was absolutely delighted to have an actual vegetarian option on the menu (instead of loading up on side dishes as usual)! 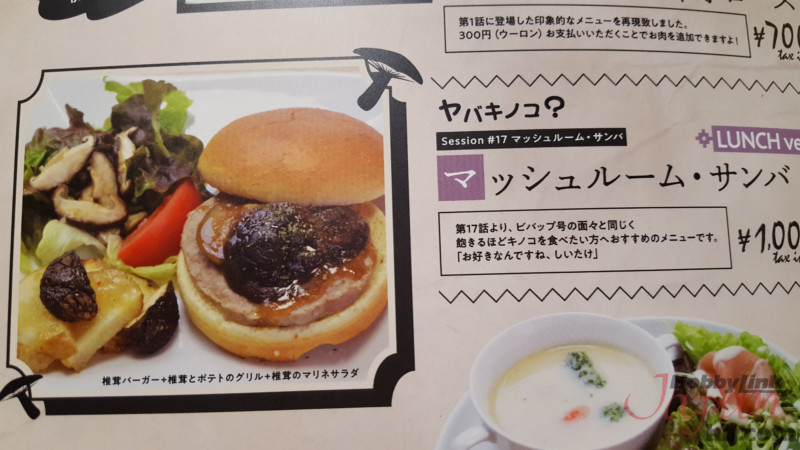 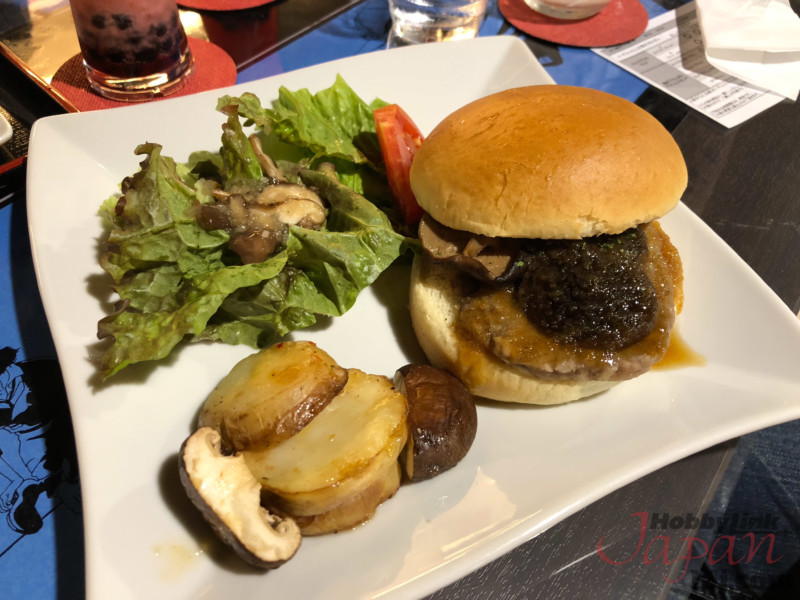 A mushroom-based dish named after Session #17, when the crew of the Bebop (aside from Ed) eats questionable mushrooms and ends up hallucinating for the entire episode. 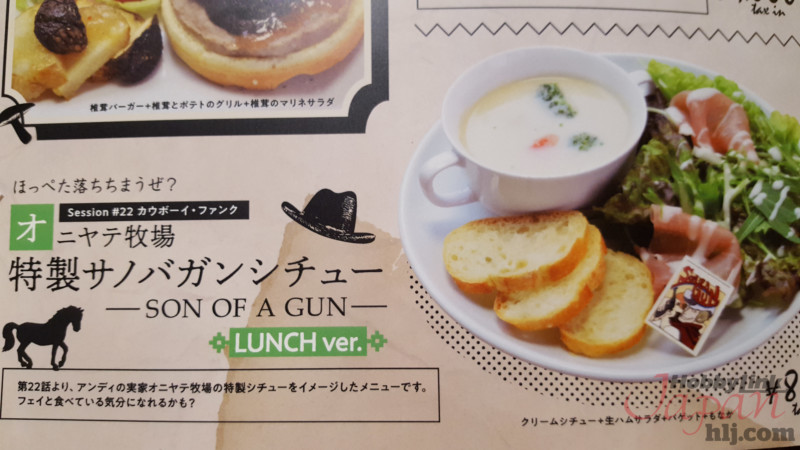 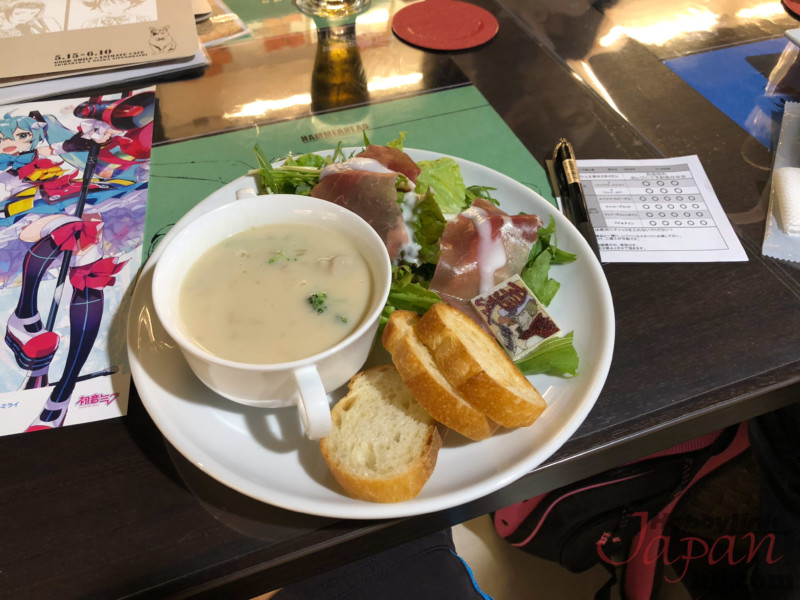 Oniyate Ranch is the ranch owned by none other than Cowboy Andy, the rival cowboy featured in Session #22. 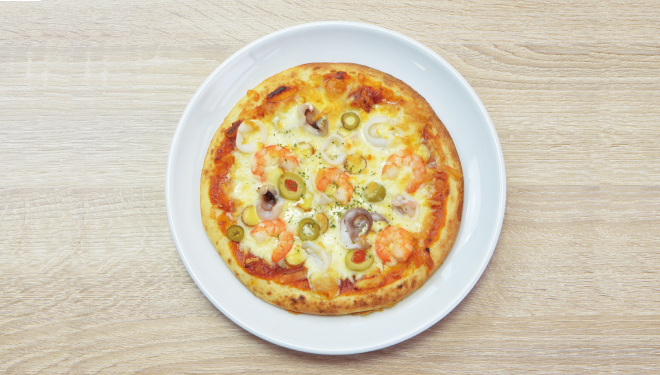 Ganymede is the largest moon of Jupiter, home to the Ganymede rock lobster that mutates in the Bebop’s fridge in Session #11. 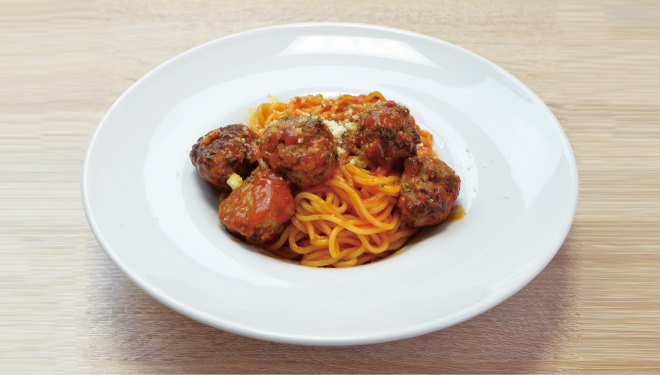 We’re just taking a shot in the dark here, but this could have been a “spaghetti western” joke! 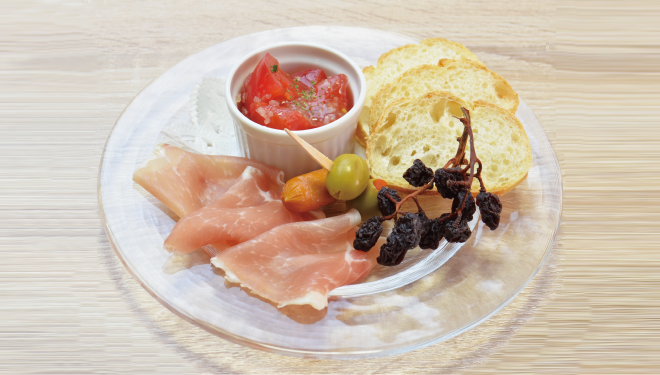 Named after a “bonus” episode — Session XX — aired in Japan only, after the show’s finale. The dish itself looked like an appetizer sampler plate — a little bit of everything. 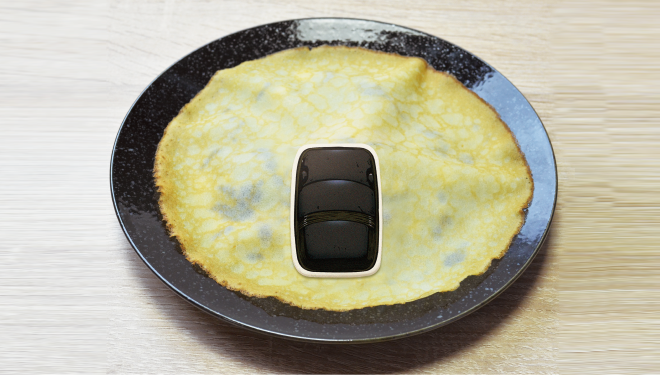 Heavy Rock in the Dark Night

This is the translation of the Japanese name of Session #11, Toys in the Attic), where a Ganymede rock lobster goes bad in the Bebop’s fridge, mutates, and starts attacking its crew. The dish itself was a thin crepe hiding a “mystery” dessert underneath. (The mystery was revealed right on the menu, though: coffee-flavored gelatine and ice cream with caramel sauce and nuts.) 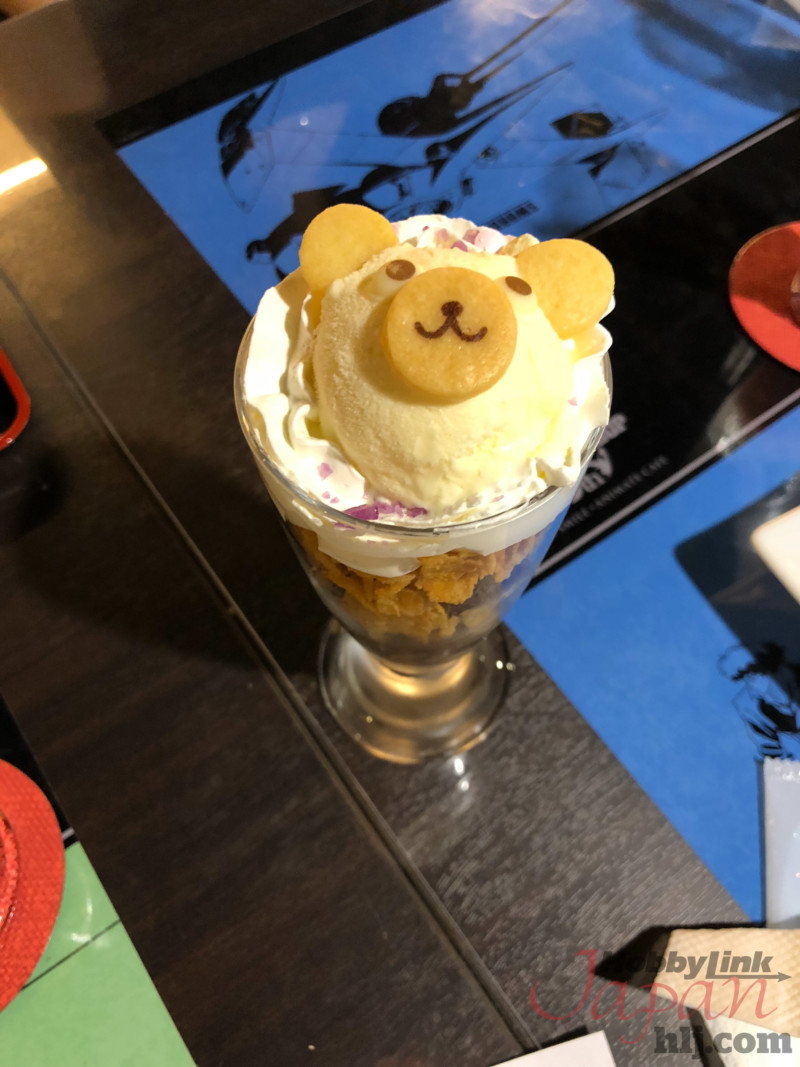 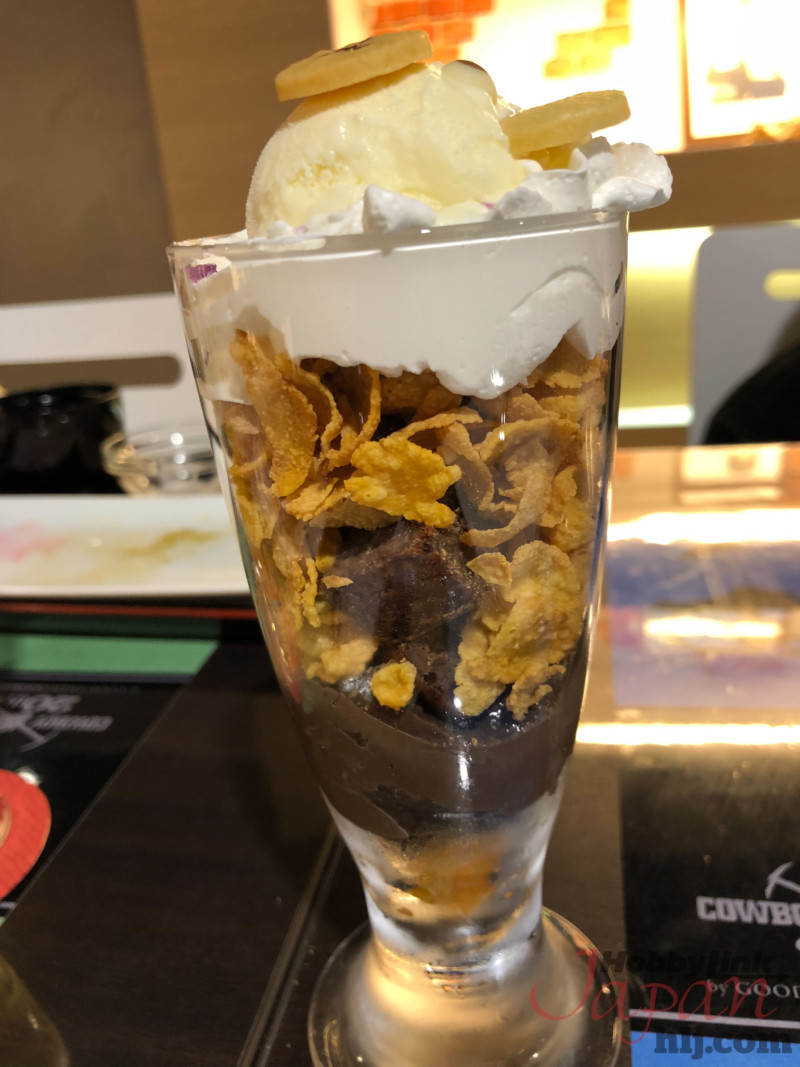 A parfait made in the likeness of the teddy bear bombs from Session #22, Cowboy Funk. The parfait’s name comes from the way the Teddy Bomber starts his speech — before he’s interrupted at almost every opportunity.

There were some other neat drinks on the menu, too! We were pretty full by this point, but decided to order a couple Swordfish IIs to try them out. 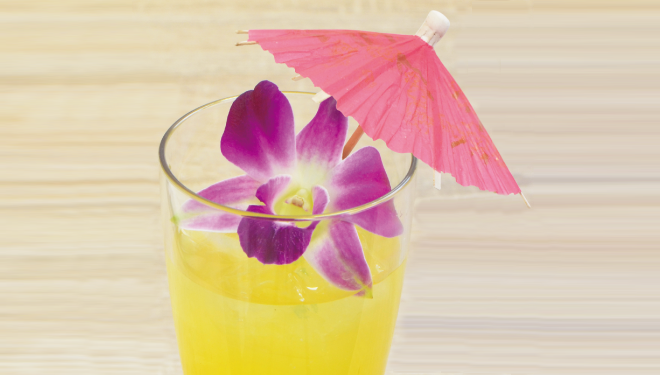 A “Cinderella” — a non-alcohol cocktail named after the famed child hacker, of course! 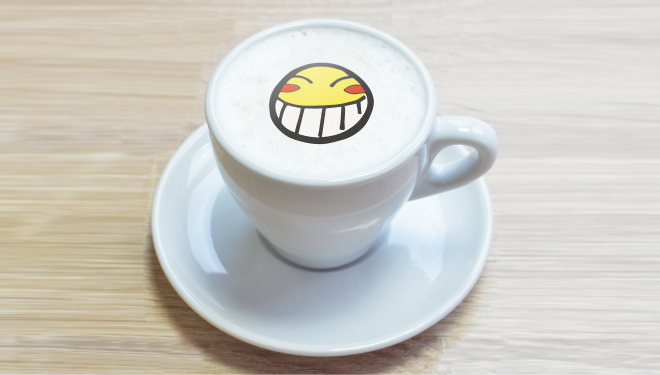 Just a cappuccino — with a cute Edward emoji design in the foam. 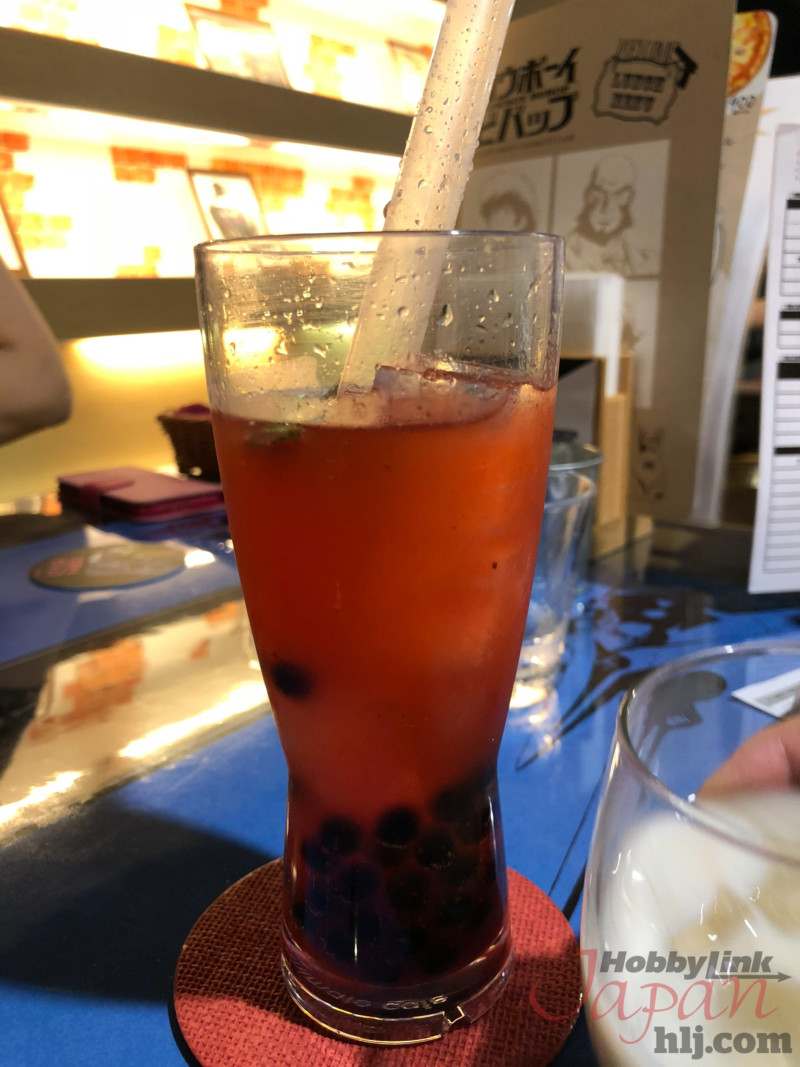 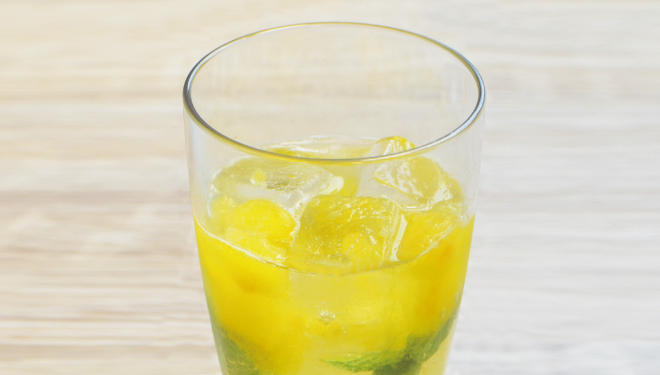 A nonalcoholic drink based on Jet’s ship. Mango lemonade with mint. 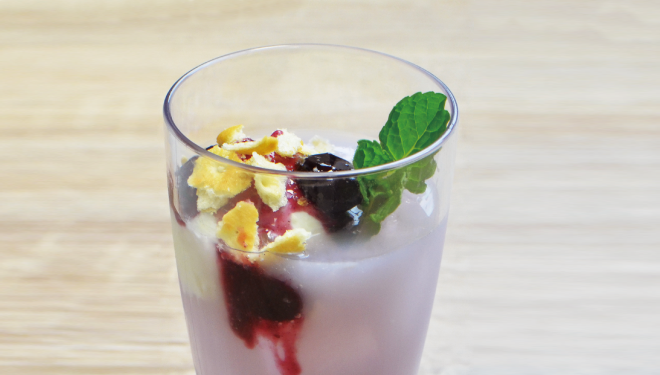 It wouldn’t be a popup cafe without some merchandise, now would it? There were several limited edition items for sale, most of which featured the Bebop crew wearing original outfits designed especially for the occasion. These Spike design lighters were super fancy! We didn’t end up taking one home, but are all personally big fans of themed items with a useful daily-life purpose. 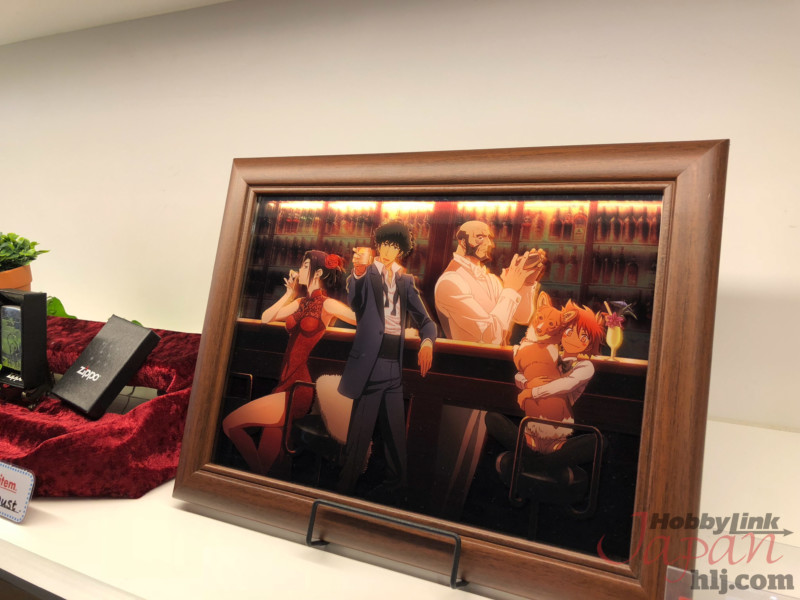 These gorgeous little pieces of artwork were actually for sale! This is the design used for promotion of the cafe, showing all characters in their special outfits. 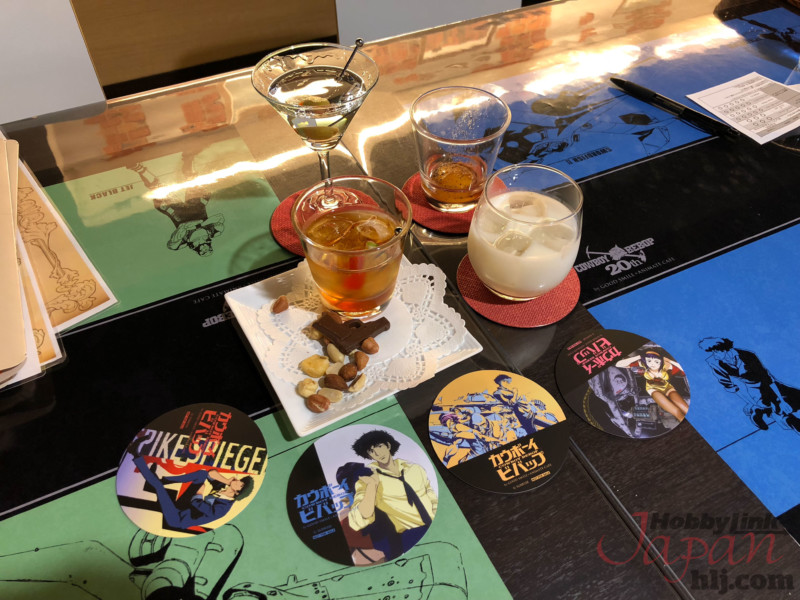 Every themed menu item order came with a random collectible coaster, too. Here are the first ones we got — but we ended up taking many more home!

In addition to these lovely pieces of merchandise, the cafe was also selling rocks glasses (one for each character), acrylic stands of each character, cork coasters, a Swordfish II necktie pin (the only item that was sold out when we arrived), and trading portraits. You can see the full merch list here.

We definitely enjoyed the trip; it was nice not just to reminisce about the series, but also to find a space to do so in a cozy, quiet corner of bustling Akihabara. From the atmosphere to the food, we loved the whole experience and hope there’s a chance to do it again in the future!

And for those of you reading, if you’re ever in Japan when there’s a themed cafe for an anime you like running, we absolutely recommend the experience!