One of the things on which Douglas Trumbull has spoken – and lamented – over the years is his mixed feelings about Stanley Kubrick’s seemingly cavalier attitude to the groundbreaking models, sets, and props used for 2001: A Space Odyssey.

This is because after the film wrapped, Kubrick ordered all physical elements, as well as the blueprints be destroyed.

On the one hand, Douglas and his team were horrified at their work being casually consigned to the trash (though, thankfully, some items such as the lunar shuttle model were spared by crafty studio hands). However, on the other hand, he also knew that Kubrick’s fears of his props turning up and being belittled in other ‘lesser’ films  were well founded – for the same thing had been happening in film for years. 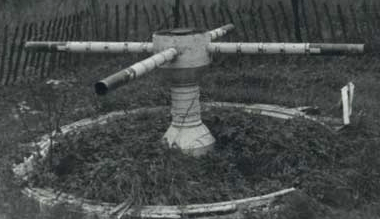 Consider the fate of the Space Station Hilton, only a few years after the film wrapped…

As a consequence of this, despite Kubrick’s goal in the film being the creation of the a sort of everyday banality to the practice of space-flight, the way the film was shot with very few models in the harsh white glare which replicated unfiltered sunlight has made it difficult for model companies to come in, after the fact, to create replicas of the props from the film.

Thankfully, with the BD release of the film, discovery of models and plans long thought lost tucked away in dark corners, and the general renaissance which surrounded this film as of 2010, we have begun to see a series of kits becoming available, such as the other Moebius kits which go with the space Clipper, such as the Discovery and the Moonbus.

The odd thing, though, is that, though the film really only has a few models all told, the fact that Dougal and team were tasked with creating a sort of absolute banal realism inside and out for the props and sets, means that there is something very familiar and ordinary about material which, in any other hands. might seem extravagant or overblown.

Perhaps the key to the simple, workmanlike beauty of the models in 2001 was the fact that on Douglas Trumbull’s team was two aerospace engineers: Harry Lange and Fred Ordway. Though both were inexperienced in cinema they were both very experienced and used to working with the law of the minimum, which is central to getting things off the ground.

As you can see this specially paid off in the shape of the Orion III space plane.

Based on the short-lived US Air Force Aerospaceplane project, in which a series of horizontally-launched spacecraft were postulated and experimented with, the Orion III was conceived as one part of a design which had, as the later Space Shuttle program would prove, some viability.

In the case of 2001, and though never seen on screen, it was envisaged that the Orion III plane itself would piggyback into high altitude on the back of a booster rocket system, before making the final leap into orbit.

Taken together with the rest of the reality-grounded technology in the film, such as the huge rotating set which allowed the gravity generation section of the discovery to be filmed (AKA Dave’s workout scene), the simple beauty of the material elements in 2001 blend into the film so perfectly. They are certainly stark and, especially in contrast to the crude human interactions, they shine a light on the very reason why humanity is making this trip the Jupiter in the first place – technology as a physical representation of our collective curiosity.

Repping HP Sauce! No, it is not a secret ingredient in airbrushing.

I wish I had used a lighter green when back painting the base. The blue is too dark and it is hard to pick out the ground.

Without any spare lighting which would fit, I infilled the fuselage with yellow, which when on display in the cabinet, picks up enough of the backlight to still give the windows a glow. 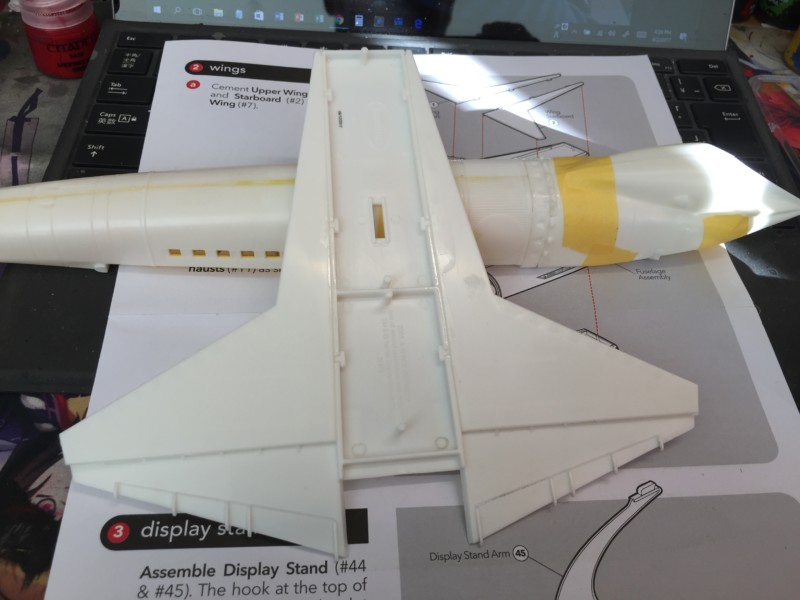 One note of caution: unless I got a badly-molded unit, the fuselage of Orion was twisted like a pretzel on the sprue. Well, not THAT bad, and nothing a bit of heat and tape did not solve, but I do tend to expect better of Moebius. 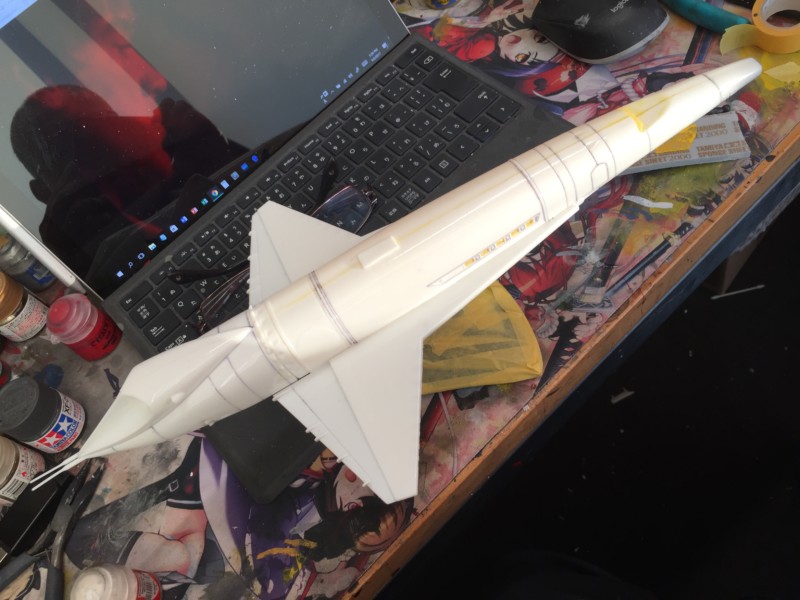 Right… So she’s together. A little flat on detail, but there is a reason for that, of course. As we shall see.

With a little over coating with thinned down XF1 white, the plane certainly looks the part.

And about that lack of surface detail… Panel line decals. I’m still in two minds over these. They are easy enough to apply and are not as fragile as you’d think for their size. However, even when oversprayed, they do not quite look ‘right’, especially when compared to the few molded in panels on the kit.

In fairness though, it could simply be because I fell into my old ways and resorted to the Bandai lining pen. I wish I had used grey rather than black, and I certainly will go back with lighter pigment powders and soften those lines some in the next week, as well as cut back on the weathering, which I do admit is a little heavy handed for the scale of the kit. 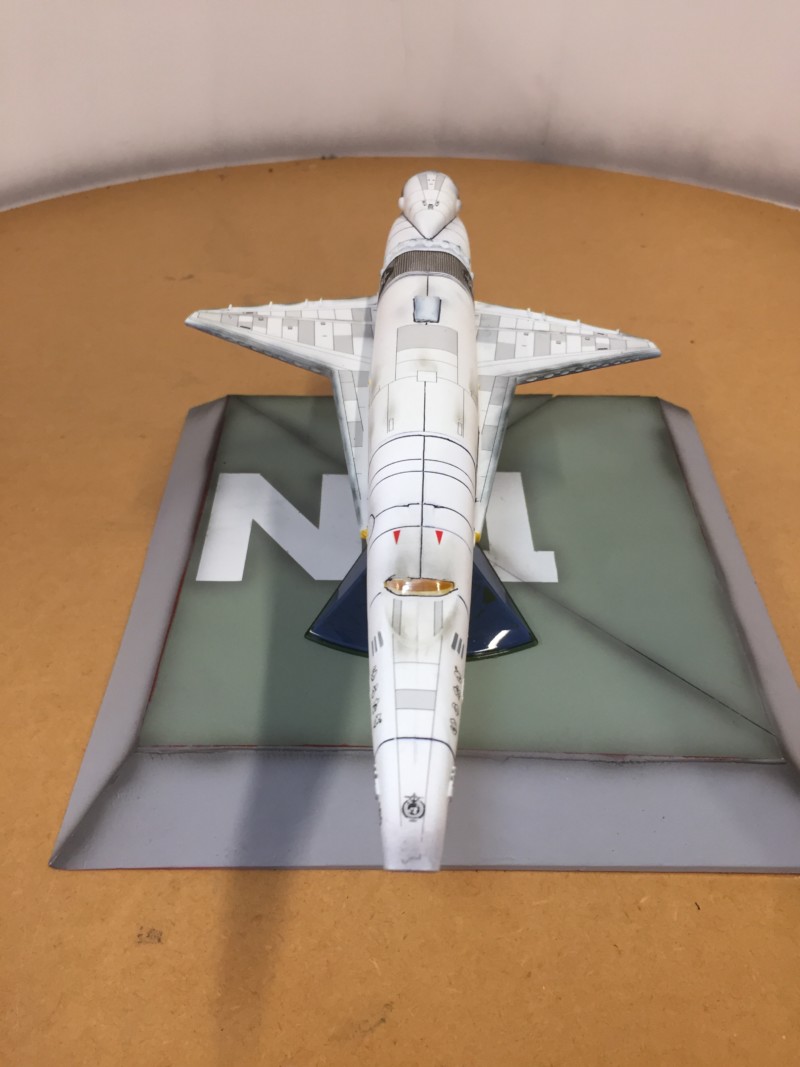 With the lack of Pan Am decals, I have decided to induct the Orion into my Space battleship Yamato Cosmo Navy, as Capt. Okita’s shuttle.

What with the large scale Discovery which is coming soon ™ I do hope someone gets around to a large-scale version of the Orion, as it is not a very large ship, so could be done at 1/72 without breaking the bank, and with an interior as well.

For the money, I feel this kit really should have been more, but when there is only one game in town, you either play it or go home.