Dancing in the Sea of Stars

“You’re free to speculate as you wish about the philosophical and allegorical meaning of the film—and such speculation is indication that it has succeeded in gripping the audience at a very deep level—but I don’t want to spell out a verbal road map for 2001 that every viewer will feel obligated to pursue or fear he’s missed the point.” – Stanley Kubrick

From Six to One

The origins of the story are often confused, for though Clarke penned the novelization of the 2001 story as well as a series of sequel stories, the books rather followed the film as it were.

According to Clarke, Stanley was becoming increasingly more interested in the prospect of there being intelligent life somewhere else in the universe, and what such life forms might think of the shameful way in which mankind deported itself on the fragile blue-green globe which was its own. Perhaps as a consequence of the absurdity of making Dr. Strangelove, Kubrick began pushing for a film which would go beyond the Them vs Us nature of the average, ‘Cold War Surrogate’ SF film. Though rebuffed time and again, eventually the maverick film director came into contact with the equally maverick writer Arthur C. Clarke, whose imaginative (hard) SF work had been published in magazine and book form since the 1930s.

When the two minds came together in 1965, Kubrick is said to have reiterated the idea of mankind being observed by something greater than itself, but not necessarily along the lines of HG Well’s Martians, whose invasion of Earth had become so worn out by the 1960s. Rather, and citing communication with Gene Roddenberry (who was in the early throws of putting Star Trek together). To that end, Clarke selected six ‘first contact’ stories and showed them to Stanley from which he might draw ideas.

In the end, the director was drawn to one titled The Sentinel (1948) which had been submitted to, and rejected by, the BBC as being unsuitable for broadcast media. However, Kubrick took to the basic root of the story like a duck to water.

The take begins with the discovery of an object on the moon, which has been placed there, unknown eons previously, by some form of intelligent lifeform. Made of some mirror-smooth and seamless material, the tetrahedral monolith is girded by some sort of energy field which prevents humanity from reaching the device itself for twenty years. Finally, in frustration, an atomic device – the highest expression of human thought and technology and simultaneously the lowest expression of its base desire to destroy – is detonated close to the tetrahedron. The shield is shattered, the device is near atomised and the narrator is left to speculate on the reason why a species, passing through the solar system, would leave this thing on our own moon.

As the narrative finally reflects: “Once we had passed that crisis, it was only a matter of time before we found the pyramid and
forced it open. Now its signals have ceased, and those whose duty it is will be turning their minds upon Earth. Perhaps they wish to help our infant civilization. But they must be very, very old, and the old are often insanely jealous of the young.”

This is what seems to have attracted Kubrick the most: the idea that a spacefaring civilization would ‘tag’ potential life with a device which, when tampered with, would alert its creators to the spacefaring development of a younger race. Whether the tetrahedron on the moon (soon to become the monolith of the film) was designed to mark out a species to embrace or eradicate remains ambiguous, but the above quote reminds the reader how we ourselves have, across the centuries, treated human cultures which were perceived as being beneath us when we encountered them…

Though we will go into the model work of the film in more detail in part two of the review, I think it proper to point one thing out off the bat. No Pan Am decals… That was a real let down. However, I am led to believe that legal issues made this impossible for Moebius, so, as Beckett might have it: ‘nothing to be done’… 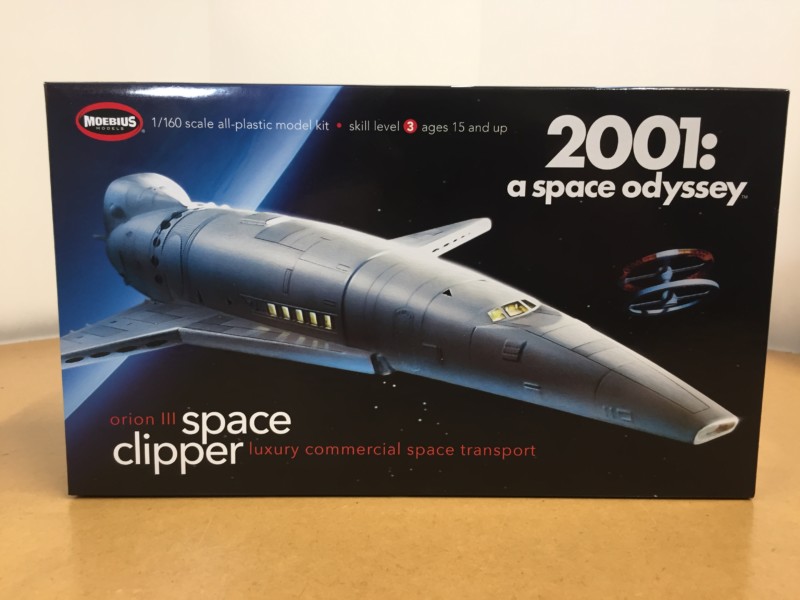 I can’t believe I have come this far without owning a version of this model.

This looks to be a simple build and has not started off well with the lack of PAN AM decals, but I can’t say this does not have some interesting features for such a small kit, not least of which being the panel line decals… I’ve not seen the like before.