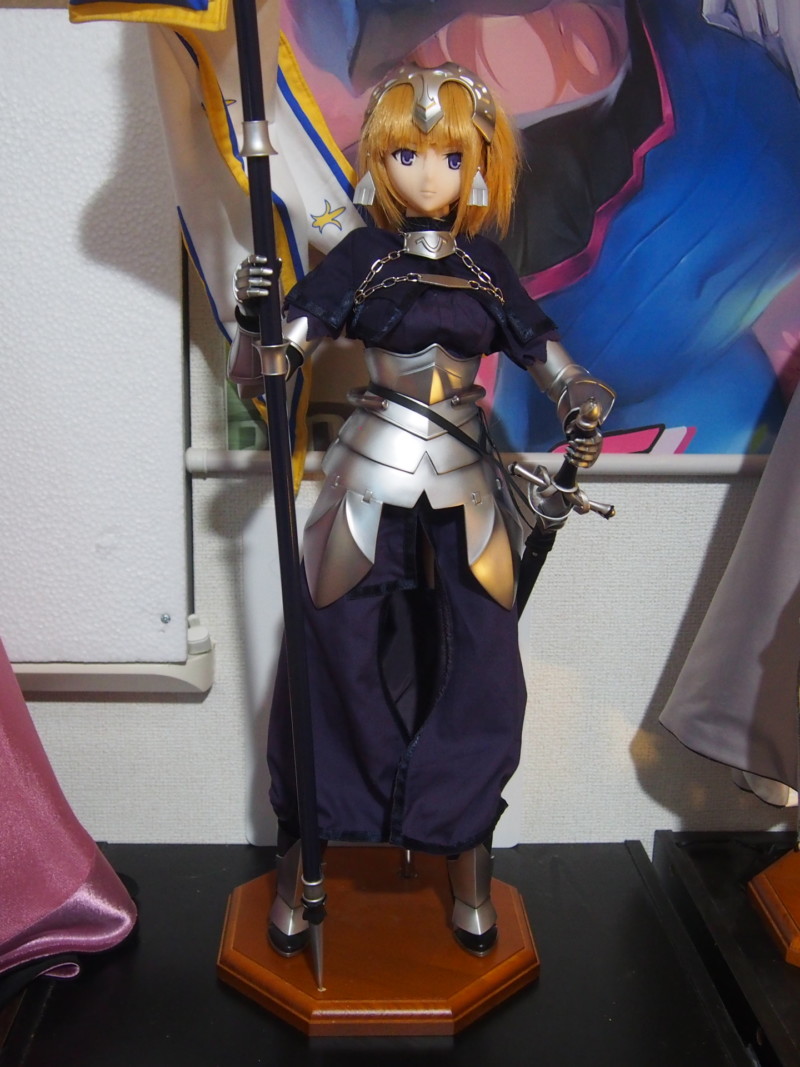 One Doll to Rule Them All?

One of the main features of the “Fate” series of games/comics/animation is that the protagonists of the story employ a series of servants, who represent a variety of archetypes – each one manifesting specific skills in the game.

As stated in part one, the most popular of these servants is normally considered to be one of the King Arthur Pendragon types, most often known as ‘Saber.’ However, there are dozens of servants, and many variants on each one – Lancer, Rider, Archer, etc.

One notable element is that most of these heroes are analogues of historical, or noted mythical figures from a variety of nations and cultures – from King Arthur, to Jack the Ripper…

And it is no different with this character; Jeanne d’Arc. AKA Ruler.

The Maid of Orléans

Jeanne d’Arc is perhaps the most respected heroine in the long history of France, and noted for her part of the French resistance of Burgundian and English actions during what is known as the ‘Lancastrian Period’ of the Hundred Years War, during which England attempted to retain control of the areas of France it had dominated since the time of the Angenvin Dynasty, with the aid of the Dukes of Burgundy.

Born to the peasants Jacques d’Arc and Isabelle Romée at Domrémy in northeast France, Jeanne claimed to have received visions of the Archangel Michael, Saint Margaret, and Saint Catherine of Alexandria in her youth, each of whom encouraged her to strike out in support of the young Dauphin Charles, whose attempts to stave off English domination were faltering.

Though still uncrowned and therefore not universally supported by all French nobility, Charles still had enough influence to form a enough of an army to stand a good chance of breaking the famed siege of Orléans; the resolution of which would greatly affect further actions in the wars.

The success of the relief mission was most likely related to the fact that, in siege warfare, besiegers can rarely hold their own against forces from within and without. However, what was recorded by both English and French chroniclers alike was the young, war-clad woman whose pious bravery stood out in the carnage: so were the first lines of Jeanne’s legend written.

Victory after victory followed, until the Dauphin was formally, and finally crowned King Charles VII in the cathedral of Reims, naming Jeanne as instrumental in this day.

However, not all the French at court were supportive of Jeanne, and when she was taken at Compiègne by Burgundian scouts, and handed over to the pro-English Bishop of Beauvais, Pierre Cauchon, Charle’s Court was deadlocked on how to respond by her foes, until it was too late to save her by any means.

Found guilty of charges of witchcraft and heresy – for claiming false visions – Jeanne was burned at the stake on 30 May 1431.

Kingmaker as a child, and done at barely 18 years old.

However, once the wars were over, and France was increasingly ‘in charge’ of its own possessions, a retrospection fell upon the French Church. Pope Callixtus III ordered an examination of the trial of Jeanne, perhaps seeking to strengthen ties to France. He pronounced her sentence unjust, her visions miraculous and her death that of both a martyr and paragon.

Further, in the following centuries, almost every faction who sought legitimacy in their actions – from the Holy League to Revolution to Emperor Napoleon I – sought to use her name, and expand upon her legacy: The child who shook nations. The girl who made Kings.

Now, having been Canonized in 1920, St. Jeanne stands as one of the Patrons of Fair France, and inspires all who love justice.

It is no surprise that Type Moon would find a place for her in “Fate.”

Right off the bat we have problems however. Before I received my review sample, I had heard stories of the run being so oversubscribed that production had to be pushed back over three months to meet demand, and correct problems with production.

Not only that, people who received dolls in the first batch have noted that key items have been missing from their dolls – not always the same ones, either. In my case, she was missing her underwear, clips to secure her headpiece to her wig, and a series of links for the battle standard.

Minor matters, as I could replace them or remake them myself, but not a good sign.

However, all crucial elements *were* present, and well made. 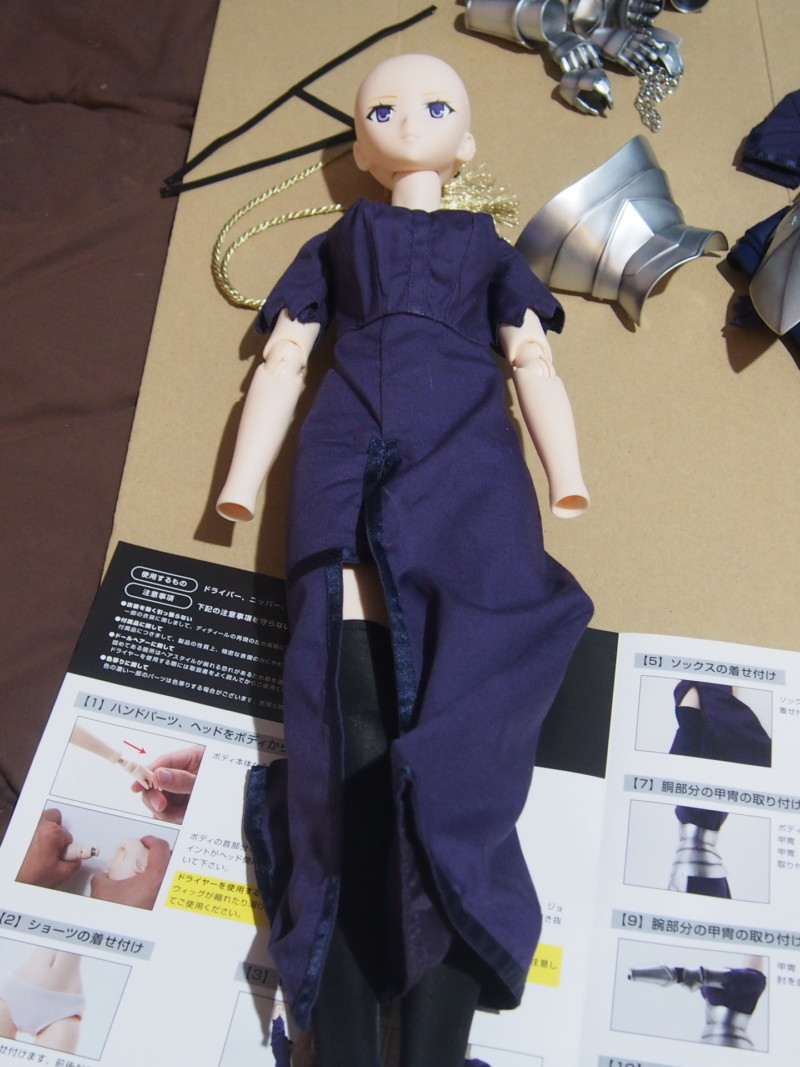 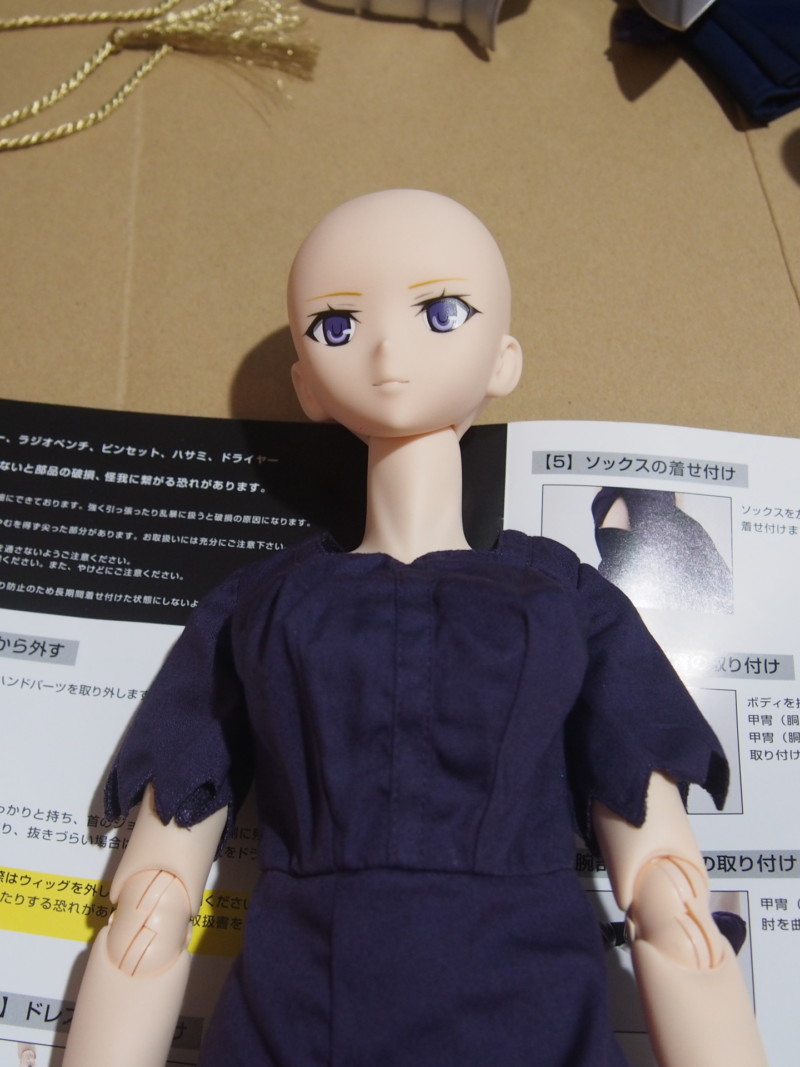 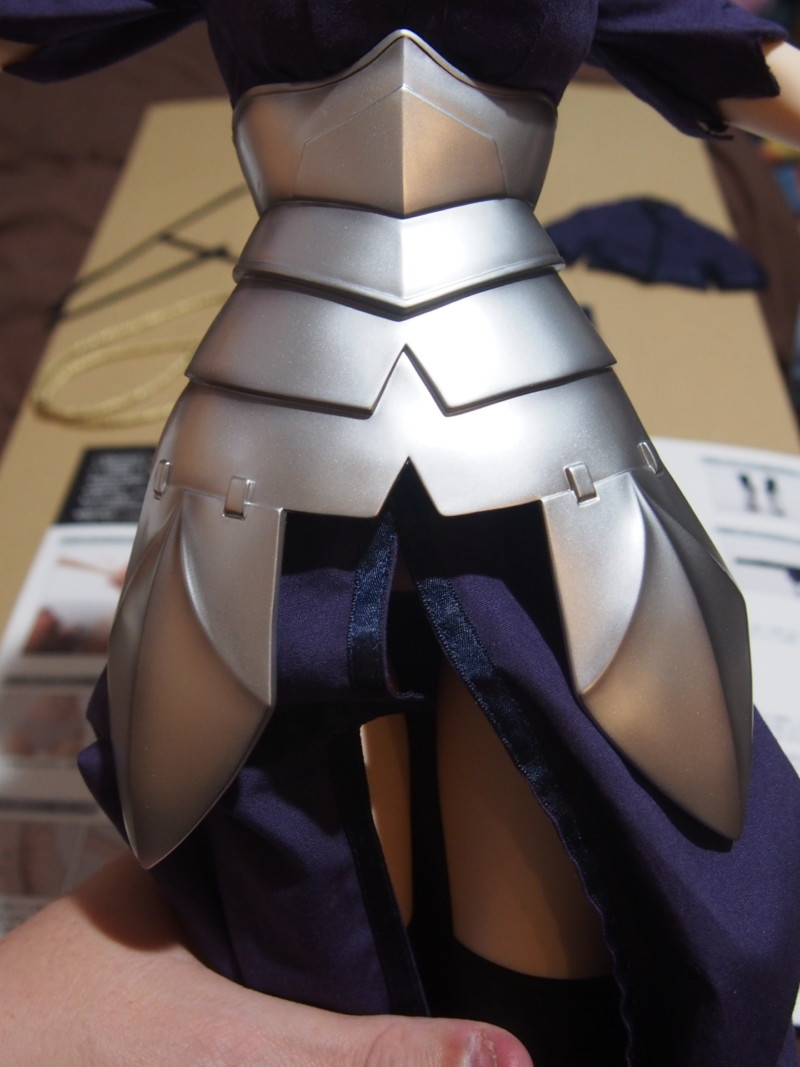 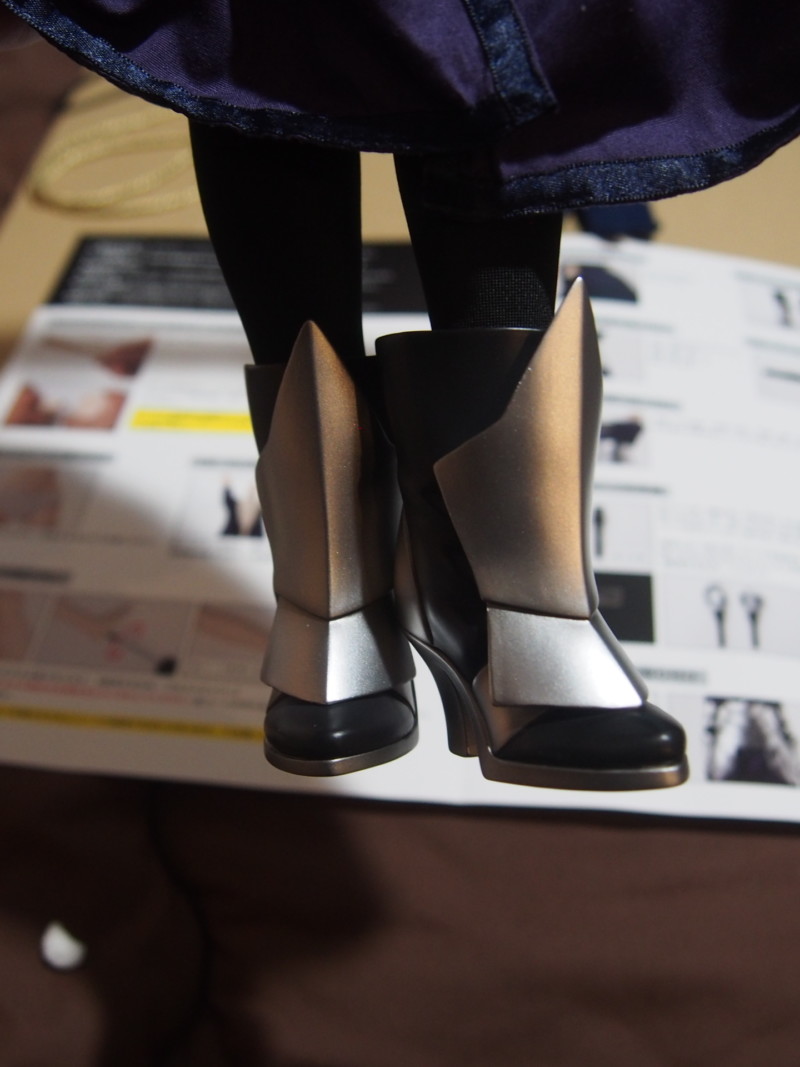 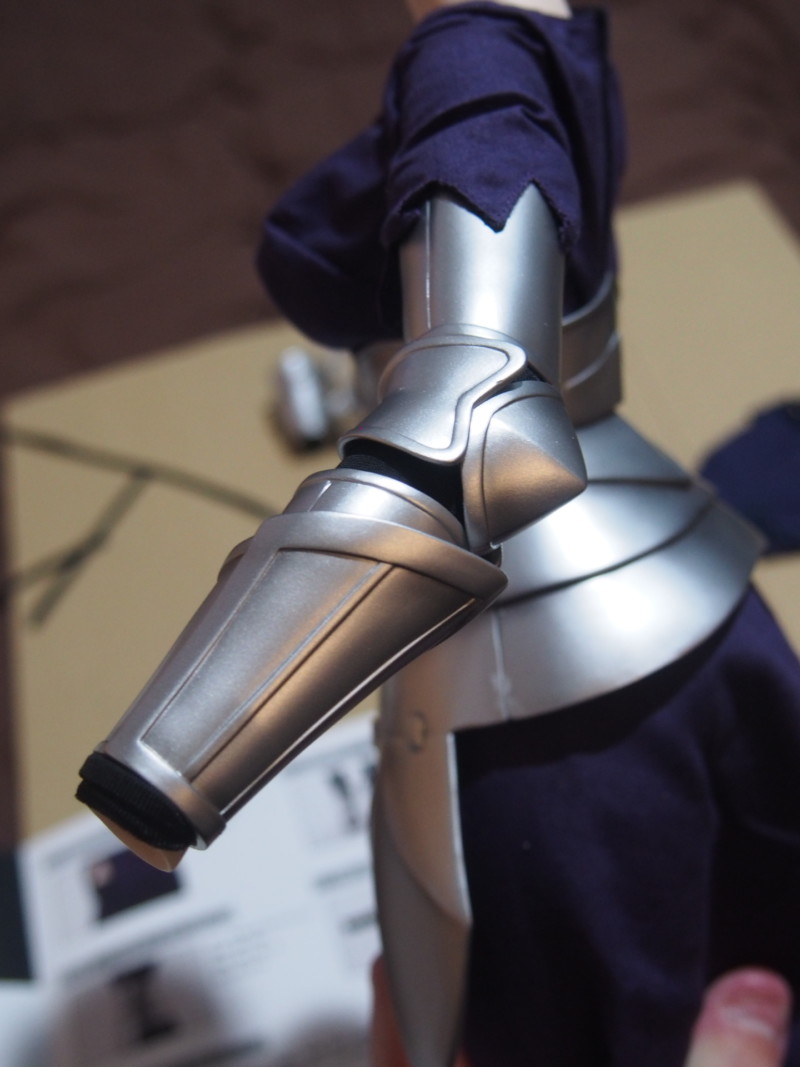 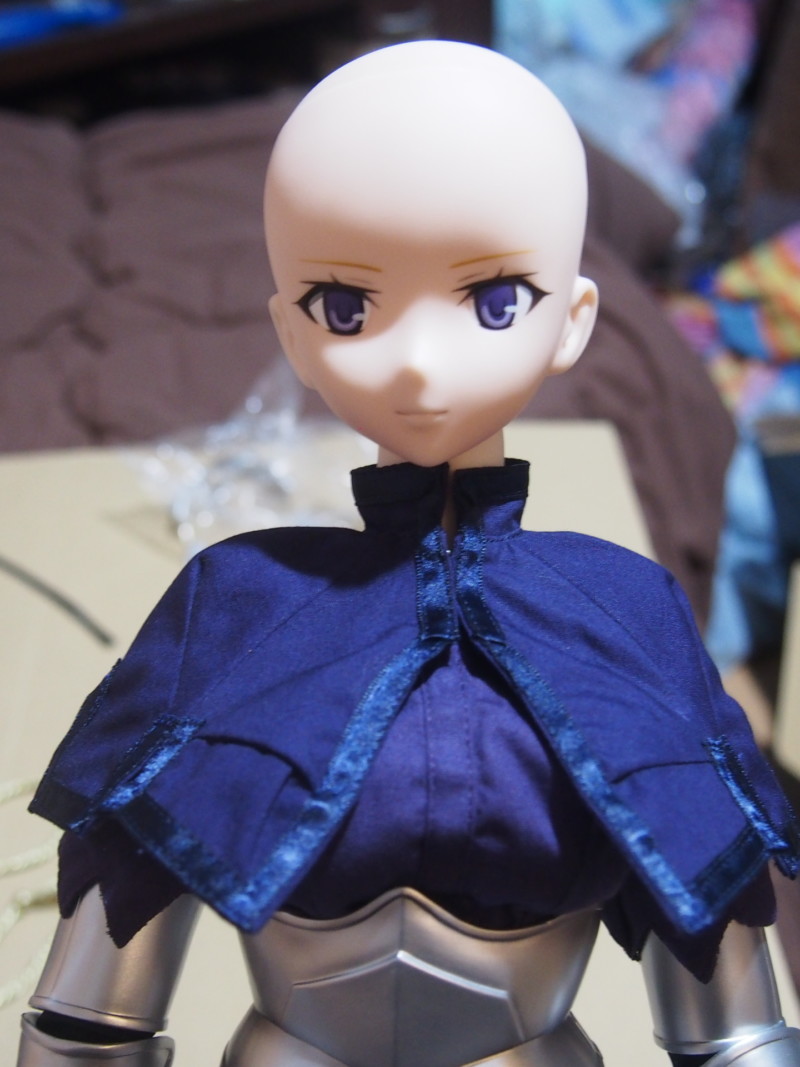 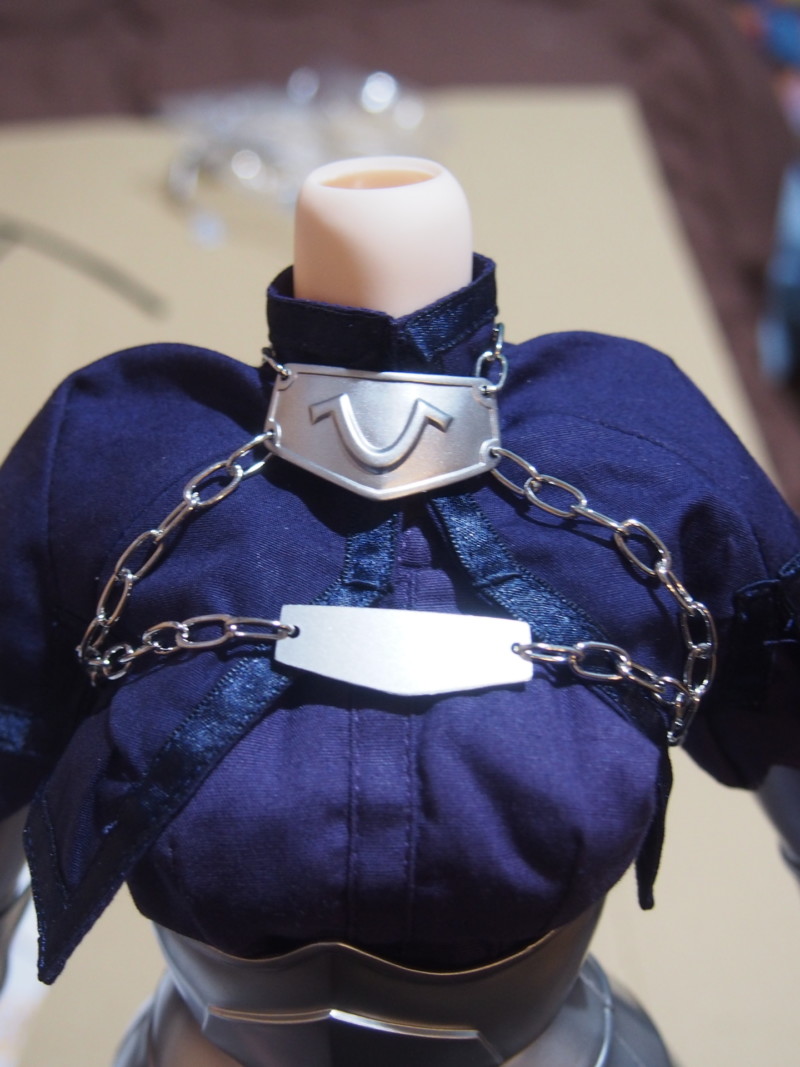 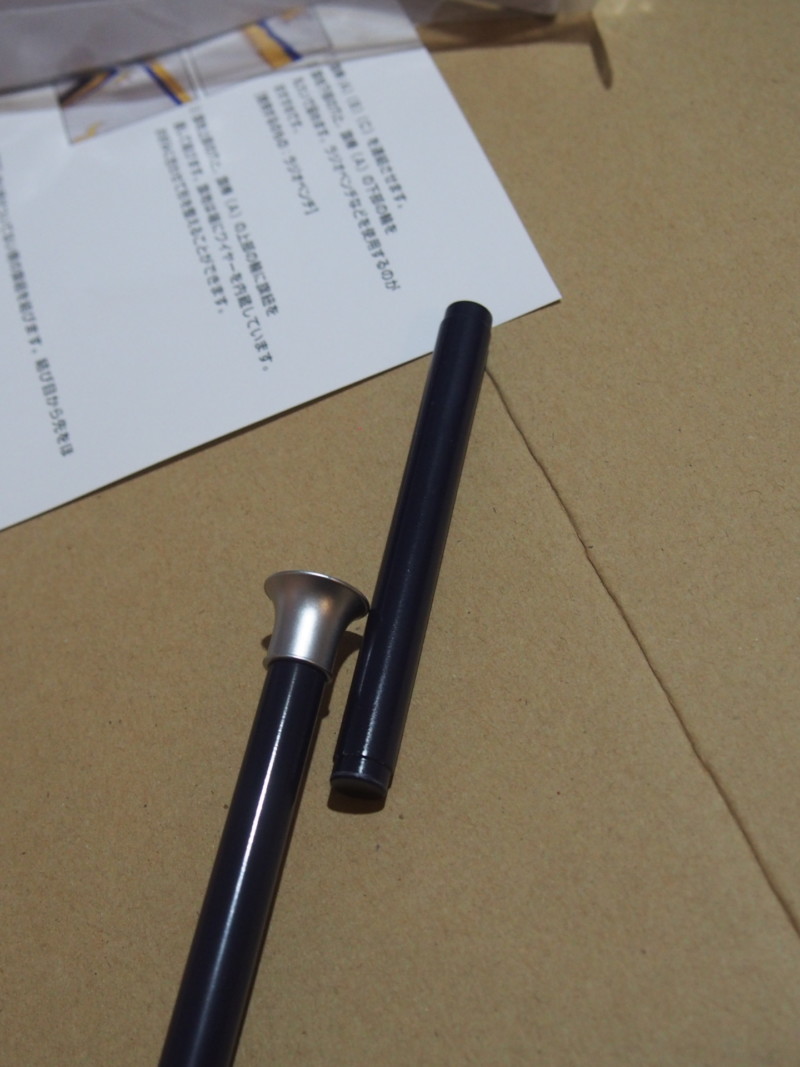 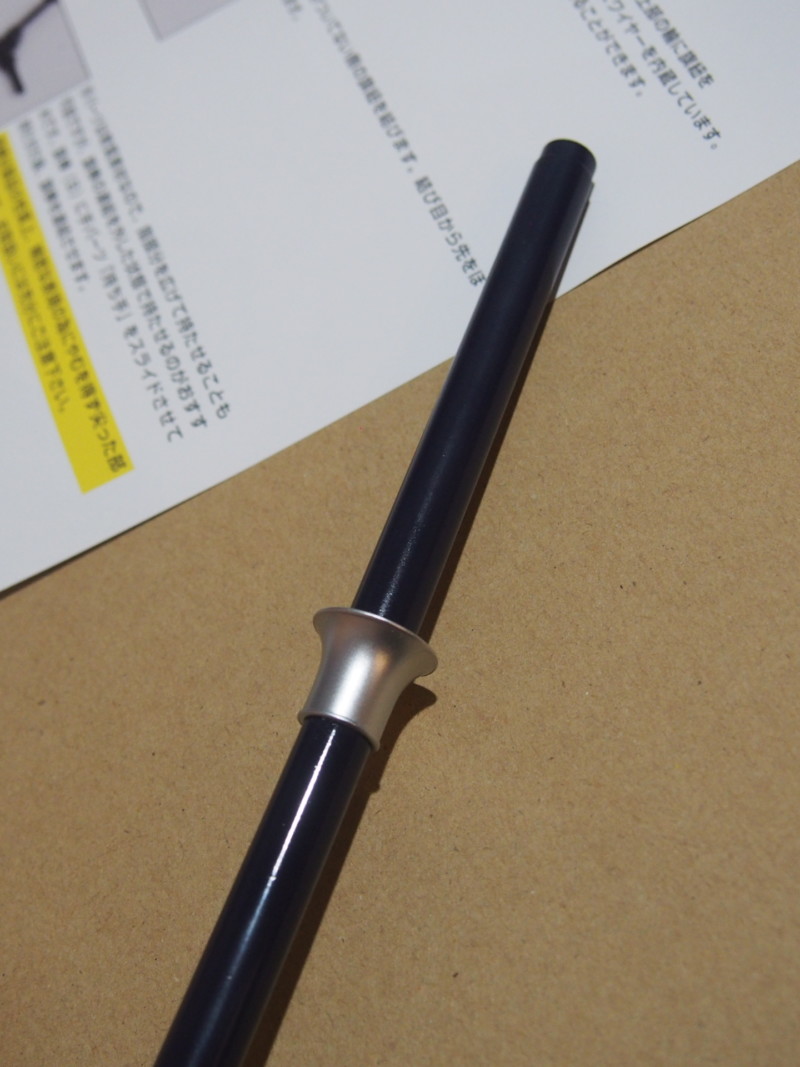 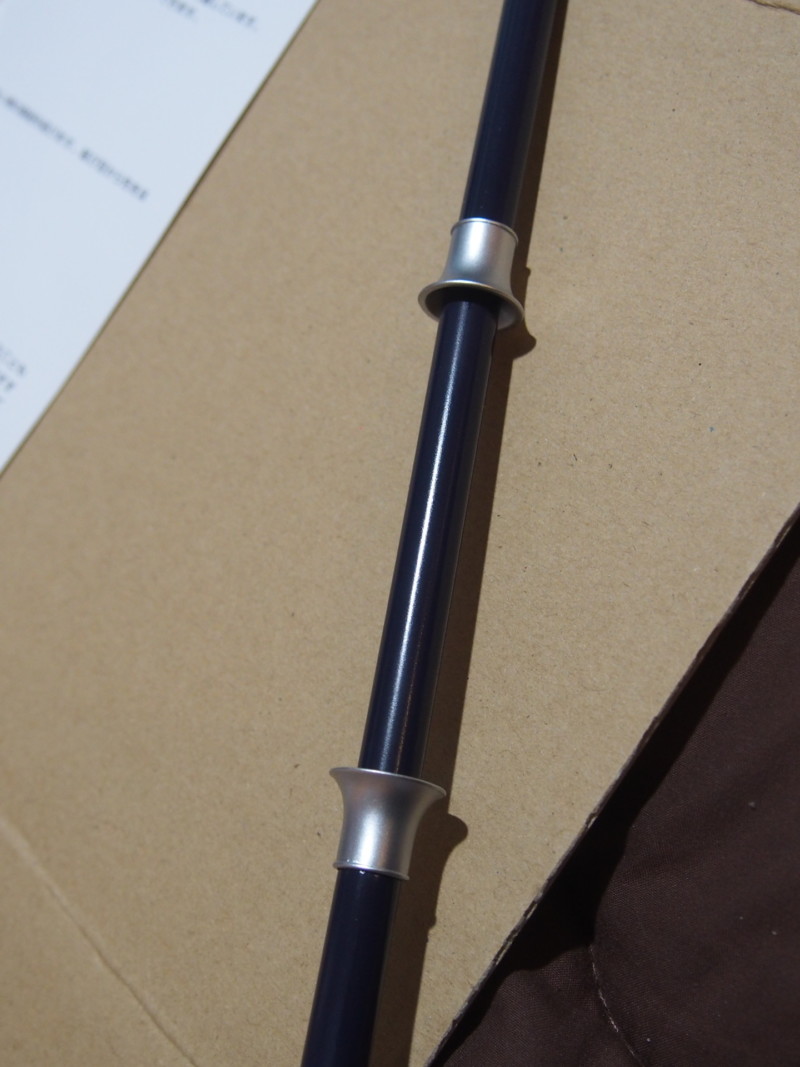 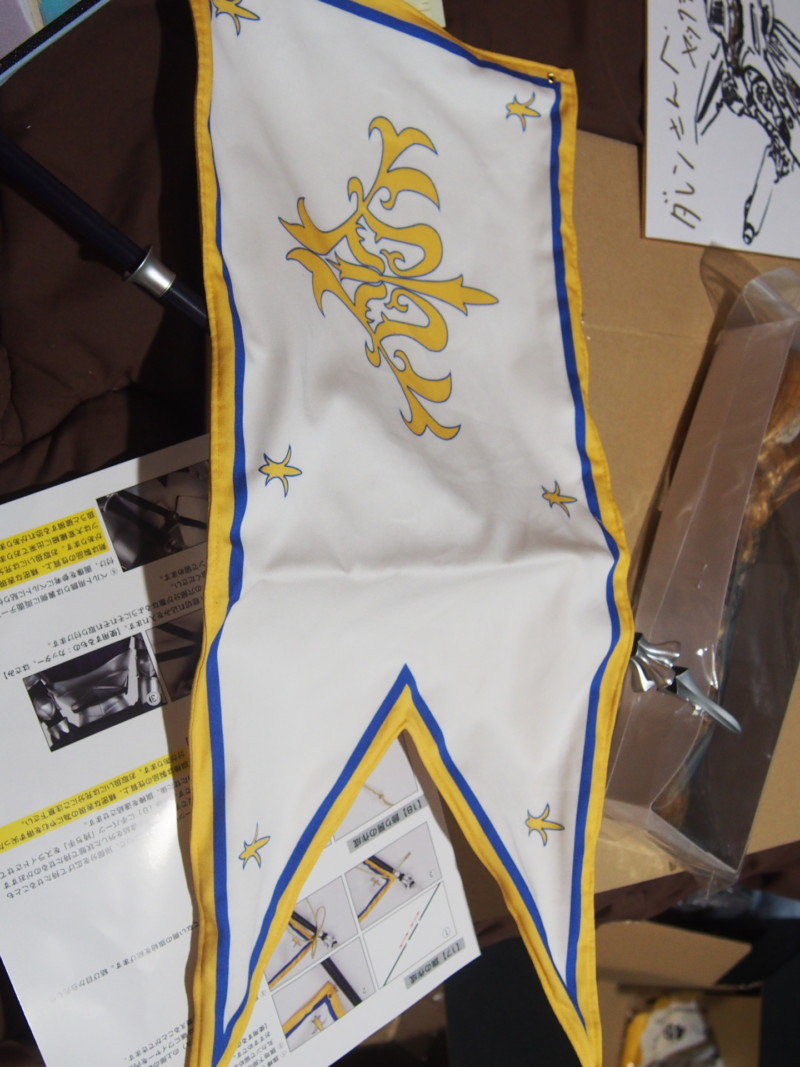 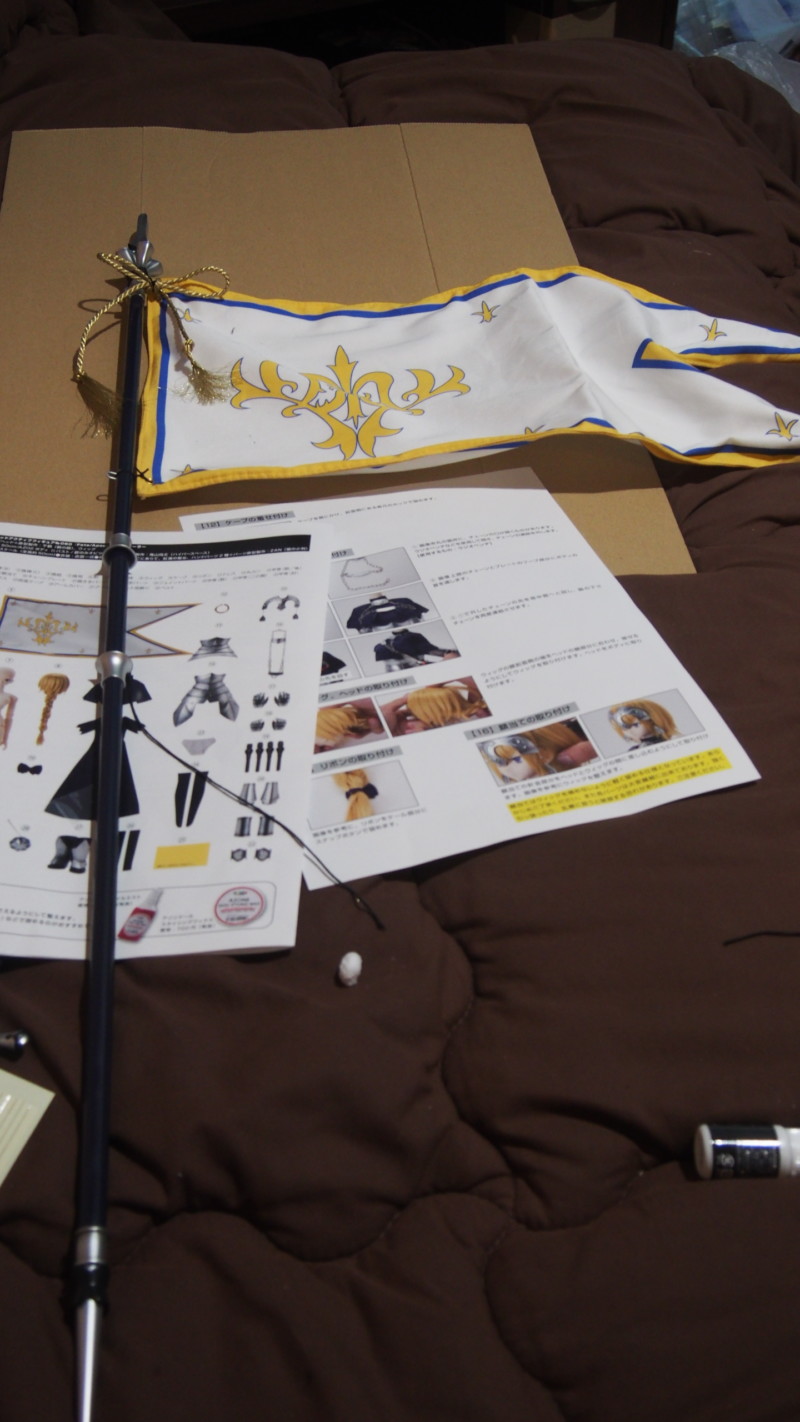 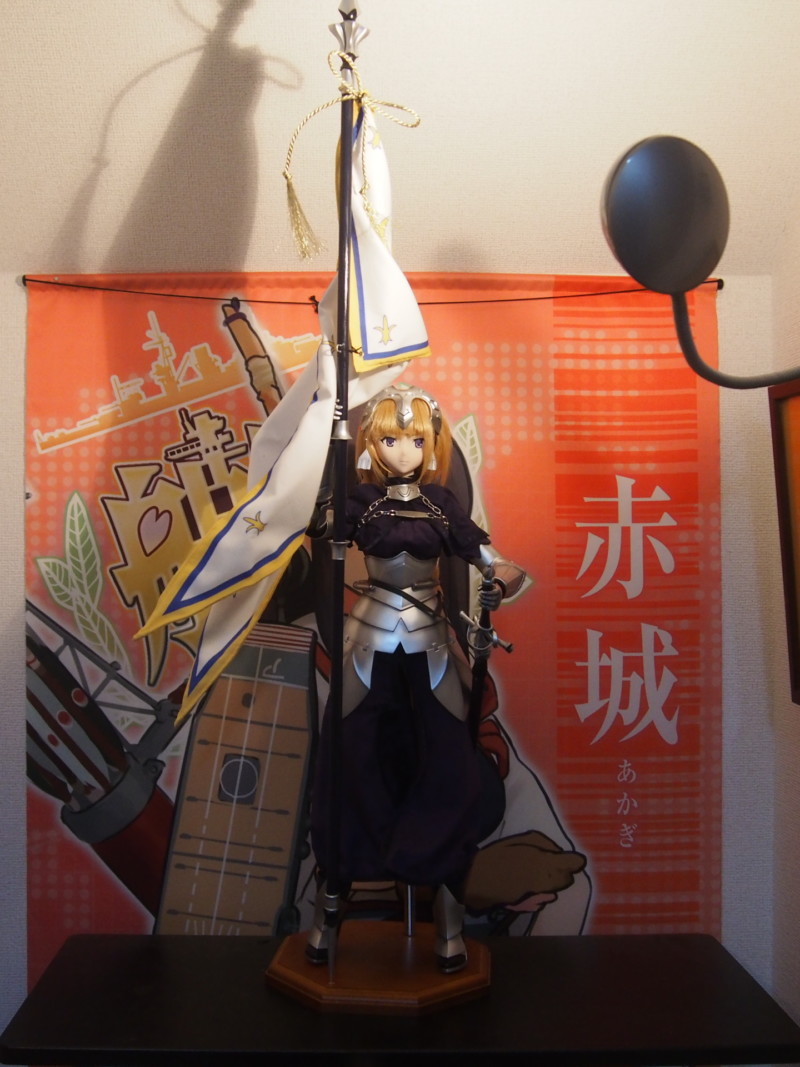 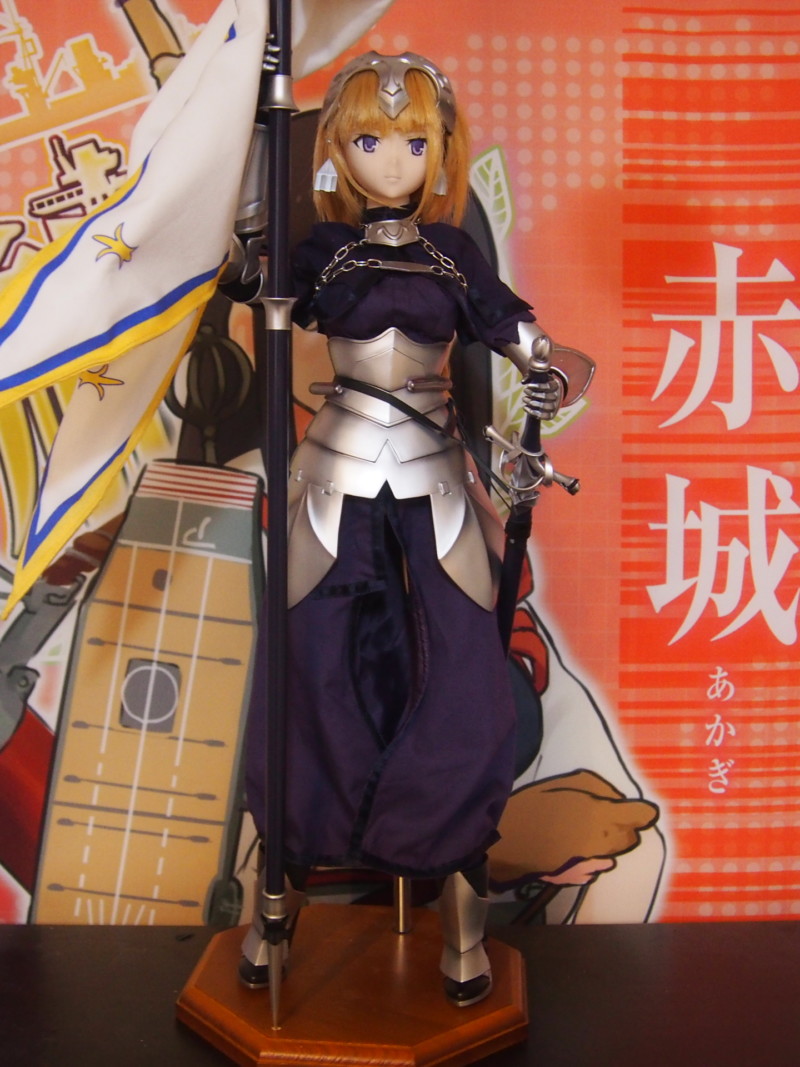 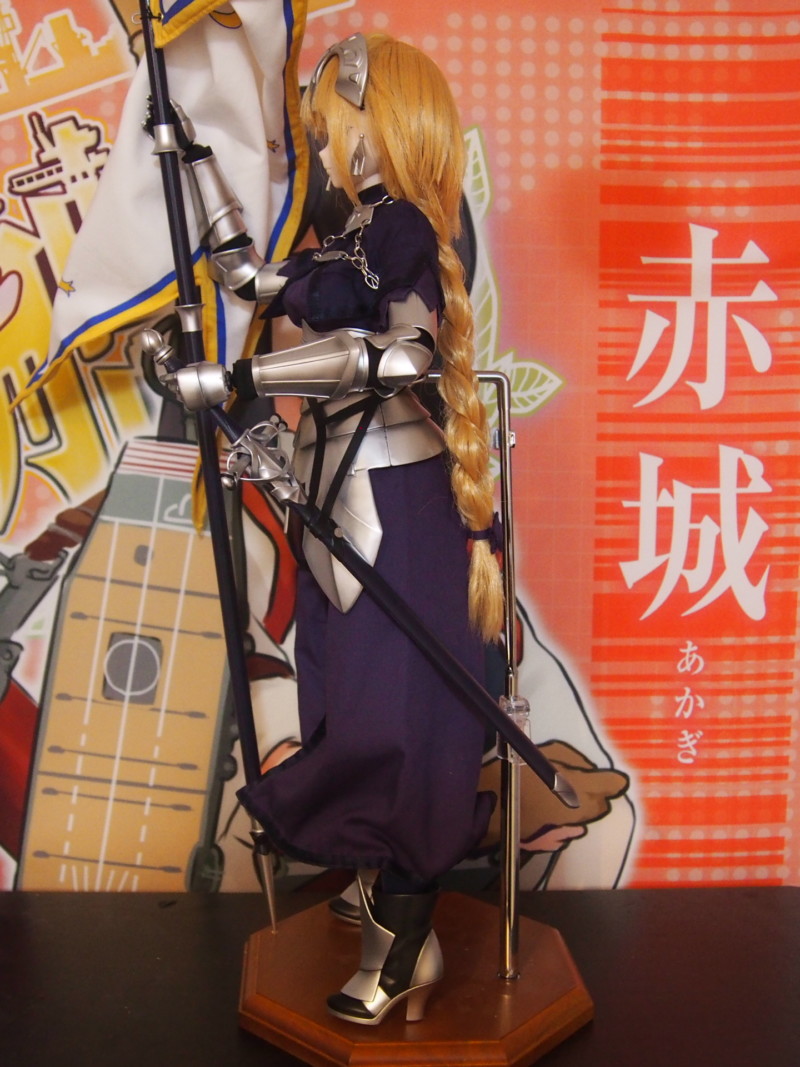 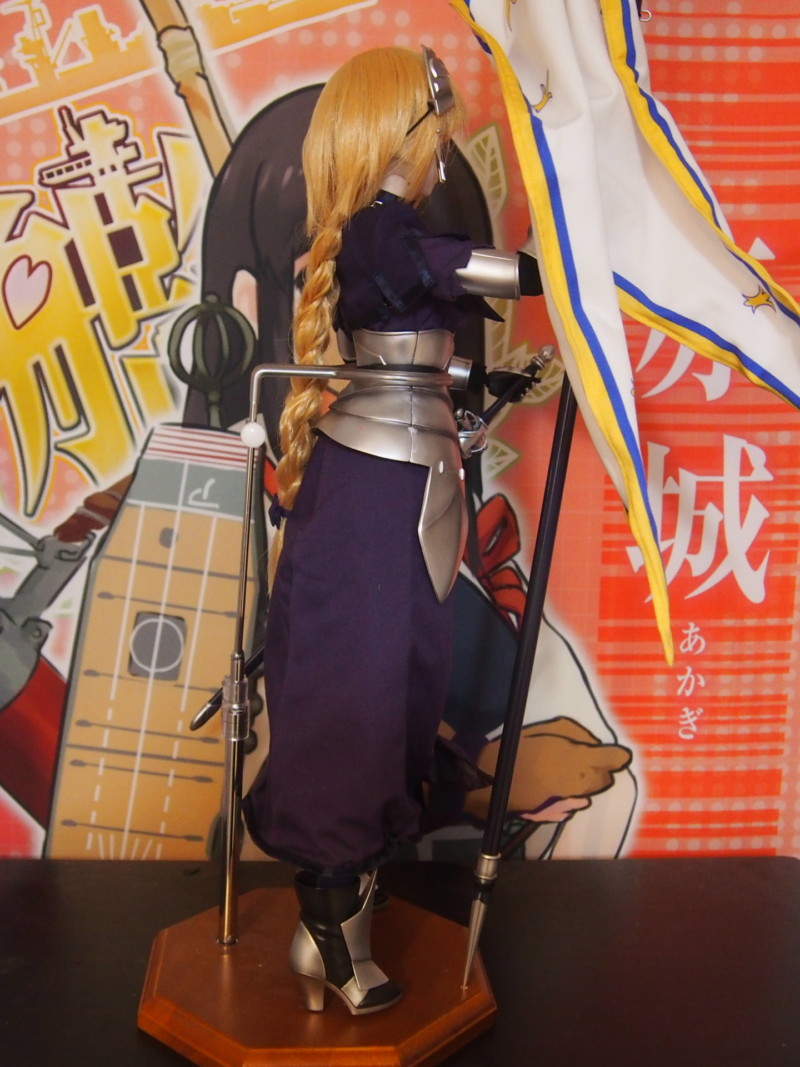 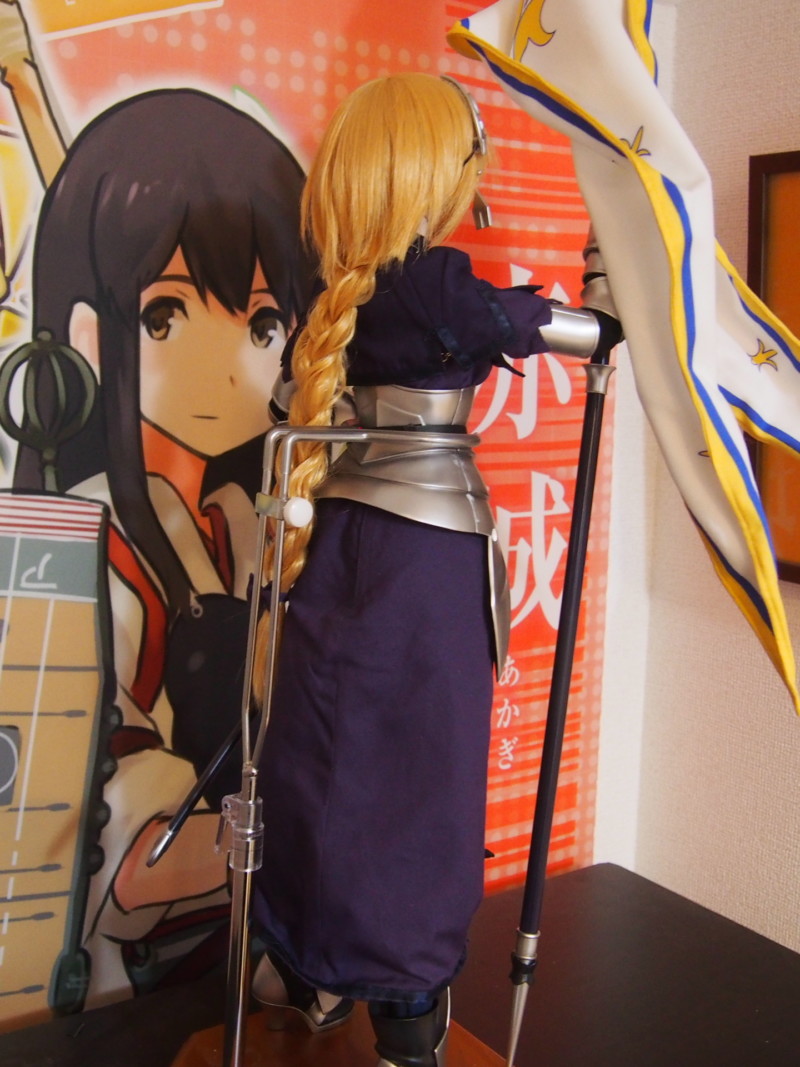 As often is the case, I get review items from Azone, and just as we all know the good/bad of the Obitsu body, this specific set needs a special note for those who have either ordered, or who are considering it as an alternative to the ‘coming soon’, but costlier Volks DD.

The Good.
1: This iteration of the AZ02 body is not nearly as fragile as its predecessor – especially in the elbow joints.

2: Armour and clothing are both generally well made, attach without much tweaking and, saving one exception stay in place (unlike their Saber). The sword and scabbard too, though very delicate, are well made.

The Bad.
1: Beware of the gauntlets. Azone includes tape to hold them to the arm stubs, but for me it did not work, and I was forced to hot-glue them in place. Hot glue will allow me to remove the hands, if needed, and seemed a better compromise than epoxy or other cements.

2: The chain around the chest has no actual clip. One is required to open up a link, then close it up when attached. One certainly can’t do that too often without breaking. In my case, I’ve resolved to make my own QD mount, as the local 100 Yen shop has just the things.

3: No positive retainers on the Sabatons. Once you have unscrewed the feet, the weight of the doll alone keeps the boots on the feet. Pick her up in a hurry and you’ll be left holding footless fury.

4: Random missing parts. A number of folks on chats here have noted that dolls are missing random small items (as noted above, my doll was missing a couple of small rings which help the banner attach to the staff, the clips on her headdress and her underwear). This seems to be a fault of the production (on a doll which has already been delayed 3 months). Azone made good, but I was able to walk into the store and wait a few days – overseas buyers, especially those who buy from third parties, will not be able to do that.

5: The sword hangar is utter rubbish. Flimsy vinyl. I’ve replaced it with a leather aftermarket belt. I now have to make some chain hangers for the scabbard to replace the temporary threads you can see just under her left vambrace. Though I put out for a nice craft belt, one could easily replicate the Azone belt in better quality pleather, or kid leather. 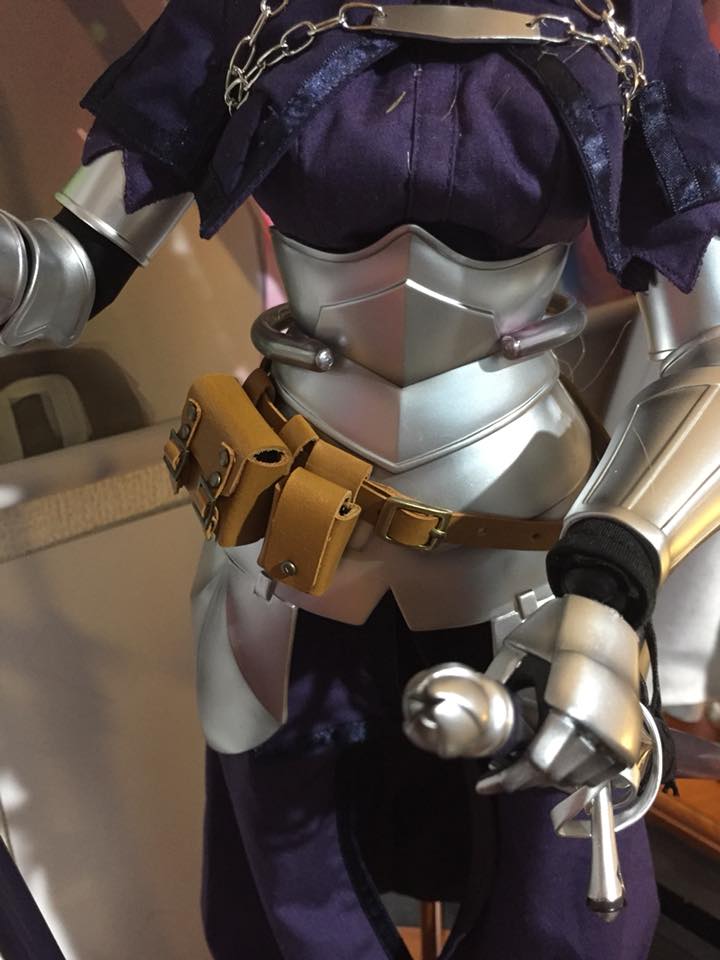 Cheaper, and generally well made, but with some areas that need attention.

Nothing game-breaking for Azone 50 fans, for sure, but this time the flaws are really worth noting before making a decision. Supplies are still to be had and prices are stable. If you missed out on the Volks DD, do not want to pay the higher price for the Volks Ruler via third party dealers and do not mind a little work, to make this doll what it should be, she’s worth a second glance.

And in case anyone was wondering… I regret nothing.

It seems reasonable now, a few weeks down the line to look at the changes discussed in the review and a few other things that have been done.
One thing I like very much about the Obitsu dolls, apart from their price, compared to other manufacturers is the ability to swap out standard Azone heads, for more normal, anime-esque ones.
When bringing Jeanne up to spec. I took the chance to bring her into line with all her counterparts in my collection. 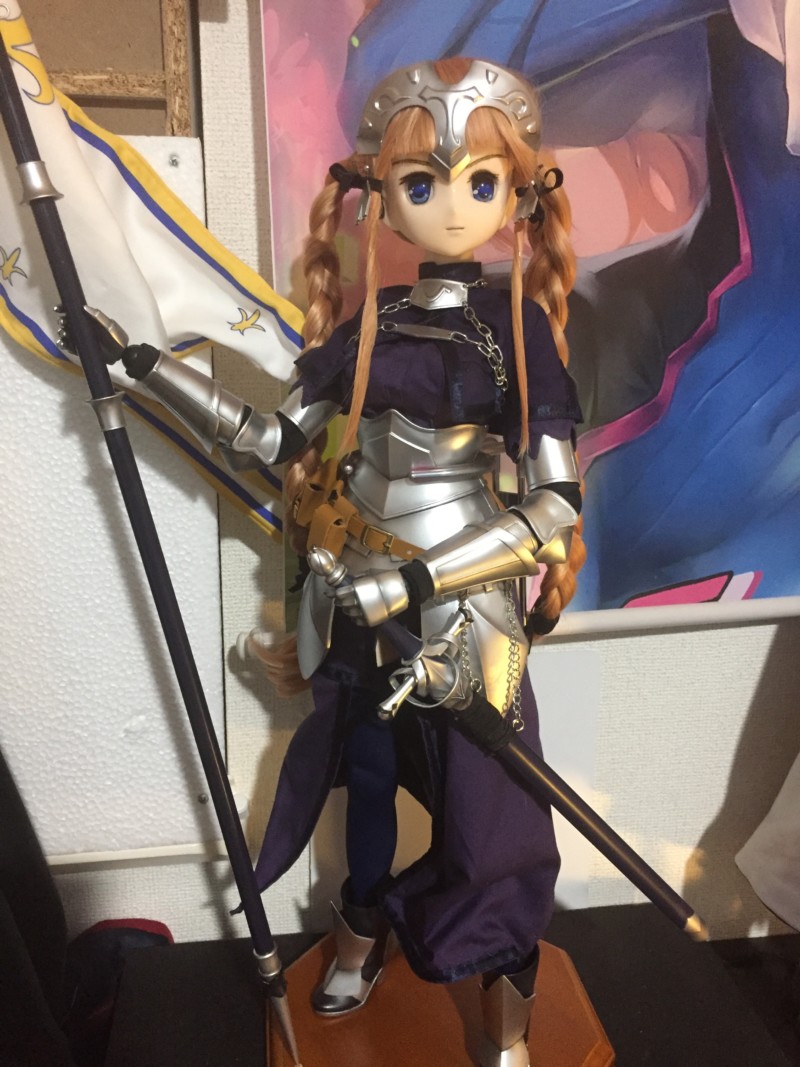 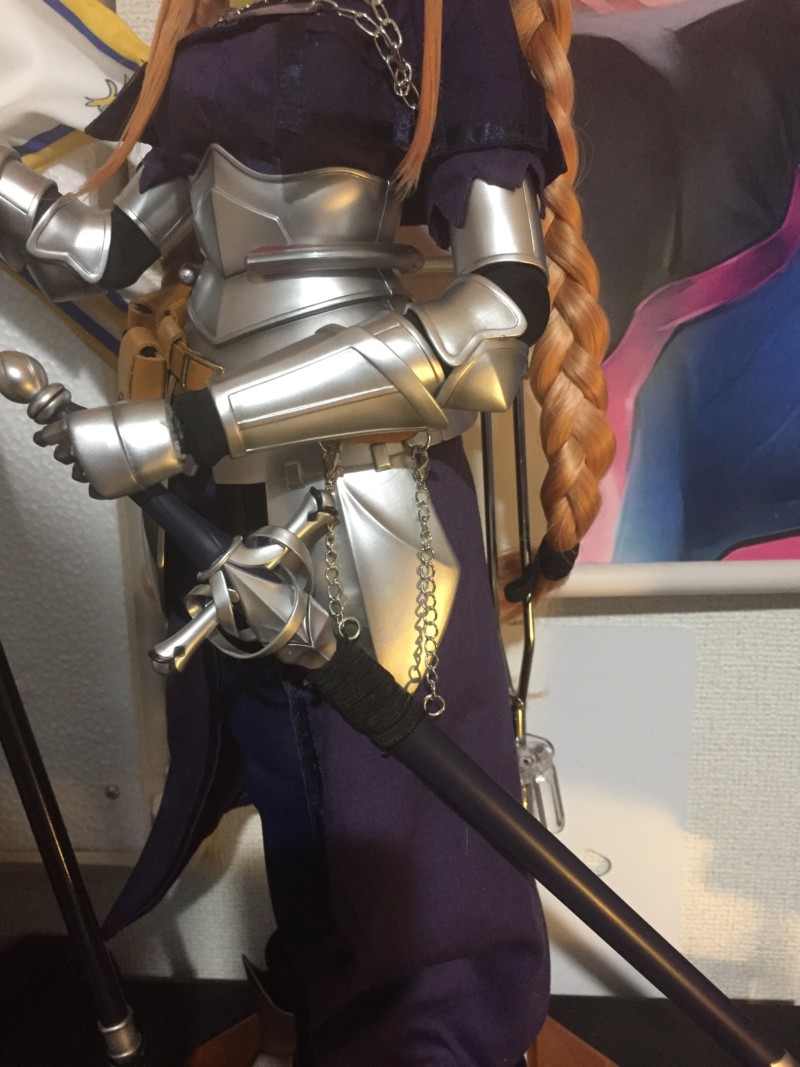 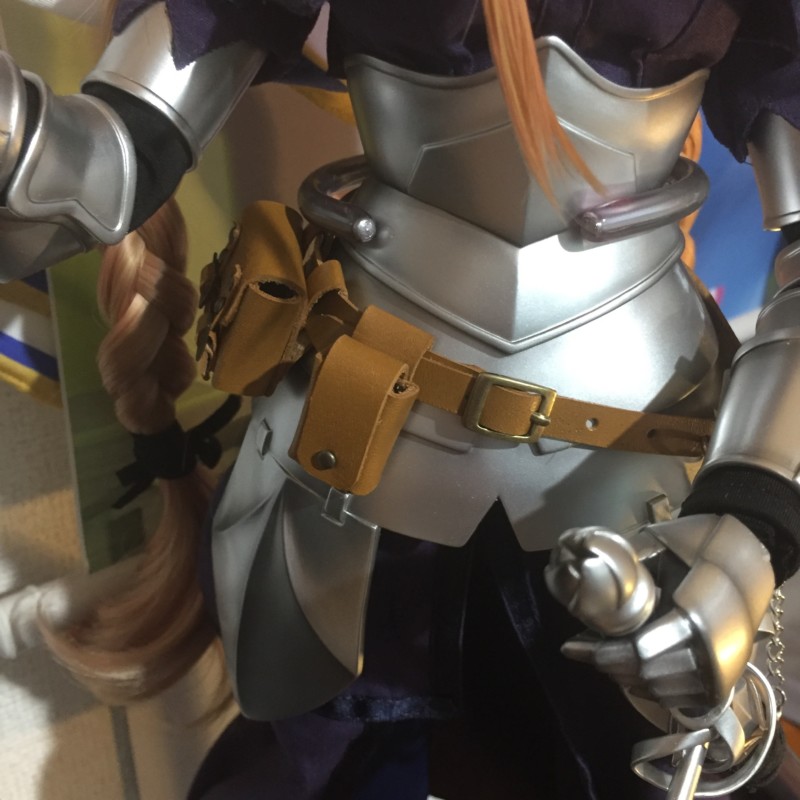 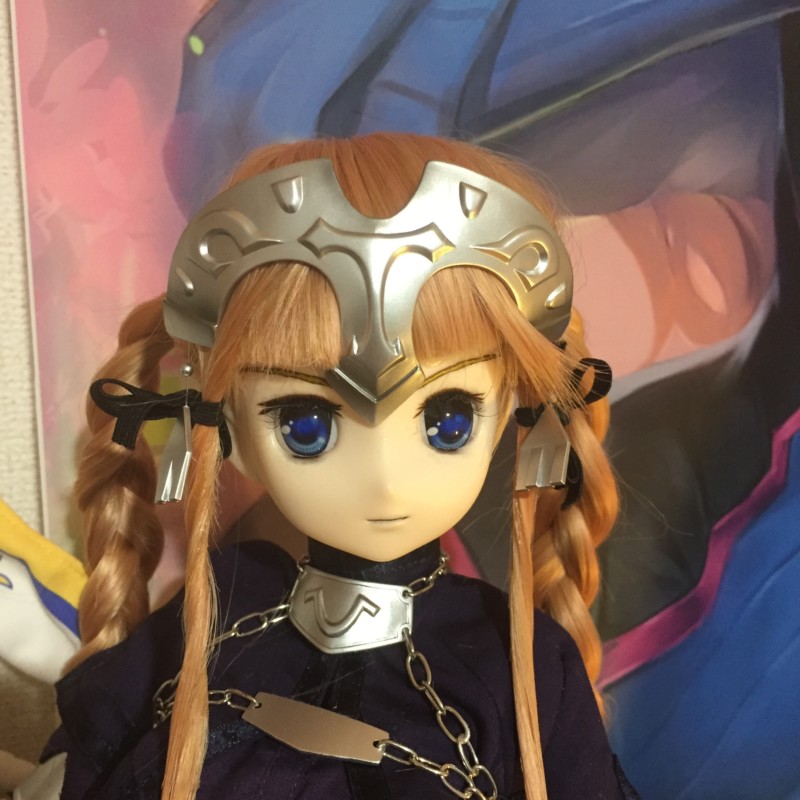 In brief:
* A couple of clips from Obitsu solved the problem with the feet (why could they not have been included with the doll from the outset?)
* The Leather sword hangar I did buy from a trade stall I patronize regularly at dollevents. a little pricey, but much better to have fine leather than bad pleather.
* The head might give Jeanne a less intimidating look than she normally has, but Obitsu has many choices in this line.

I still affirm the value for money of the Azone – especially following the, aforementioned and almost inevitable price drop, which will persist for a good while, looking at stock levels – even with the work needed to ‘bring her up to fighting form’.

Product in this review: