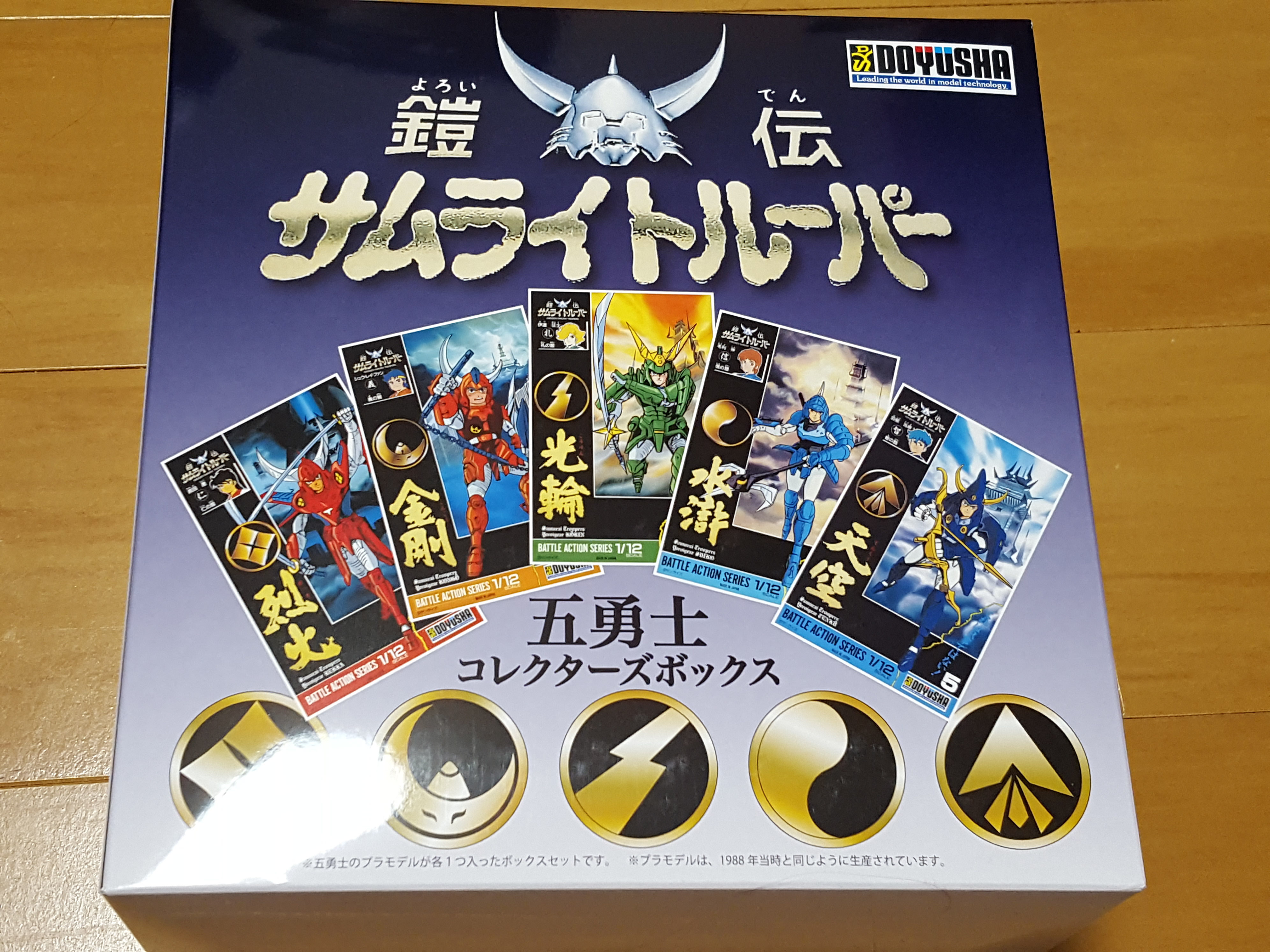 Doyusha’s re-released Five Ronin Collectos Box is here — a set of model kits of the five heros from “Yoroiden Samurai Troopers” or “Ronin Warriors,” for the English dub fans out there.

Let me start this by saying I am a huge nerd. If you couldn’t tell.

I first saw Ronin Warriors on the Sci Fi Channel in the US and didn’t think a whole lot of it (probably because I was still young and didn’t realize what anime was yet), then watched the whole thing when Cartoon Network got a hold of it.

It was the worst dub I have ever seen, and I loved it.

Unfortunately, there wasn’t much in the way of anime merchandise in the US at the time, and even as the years went on, Ronin Warriors fell by the wayside and you just didn’t see much coming out. Action figures were rare — by some miracle, I picked up an Inferno figure at a yard sale somewhere near where I grew up, and later found an action figure of Strata (best Trooper, fight me) — only be be horrified to find that the manufacturer just used the same head presumably on every toy, so he was actually Ryo in Rowen’s (Touma’s) armor.

Disappointment abound. And then all these years later, Doyusha came to the rescue. 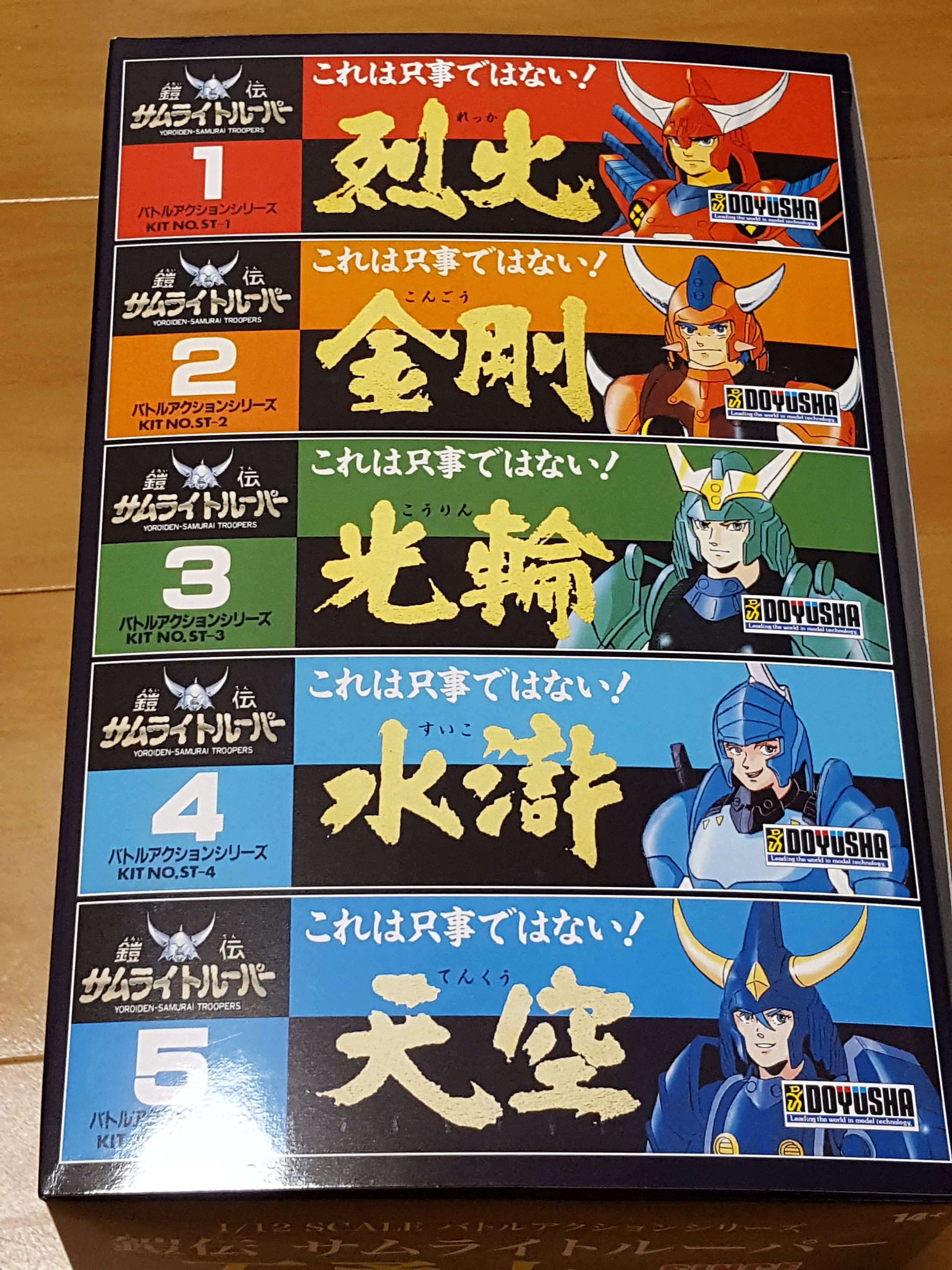 Ronin Warriors had been off my radar for a while, but I’ve been enjoying building model kits the past few years, and this just felt like the perfect merging of interests when Doyusha finally announced a solid date for a rerelease.

Truth be told, I don’t even know when these were originally released, but you can tell they are old. Let me know in the comments if you know!

It’s likely, at least, that the molding has been updated, if you compare the head molds especially to older photos you can find online of the older kits. They’re also, somehow, miraculously, snapfit kits, and I don’t know if they were originally or not. (Again, fill me in if you know!) Anyway, this is an unboxing, after all, so let’s get to it!

When you open up the big outer box, you’re greeted with an insert (which I’ve moved to the lid) that shows all the kits, and beneath that, the kits themselves. They’re arranged neatly in number order and you can clearly tell which is which. We’re going to start with Wildfire.

Ryo of Wildfire, Warrior of Flames

This is all there is to the box art — no previews on the sides like you can expect with Bandai, just a simple cover.

This is probably my favorite instruction manual ever. The head looks nothing like the character — and every character’s instruction manual uses the same head! Anyway, like Bandai, it’s a simple number-based assembly system so you don’t need to read Japanese to figure it out. It’s much less step-by-step than modern instructions, but not too complicated, at least.

The runners aren’t lettered, but every piece has a unique number and there are so few pieces that it’s not a problem. The first runner is molded in red, comprising parts of the Wildfire armor.

The only other full-sized runner is molded in white, and makes up parts of the sub armor.

The third and final runner is red, and holds the Wildfire swords and helmet details. If you’re used to Gunpla, so far, so good. The color separation isn’t great, but it doesn’t look like it’ll be too hard to put together. Wait for it…

Ryo’s head comes molded in two parts for some reason, and is entirely unpainted. And molded in white. This is where the challenge lies — if you’re not great at painting like me, painting small faces is probably about the worst thing that can be thrown at you. I have zero confidence I’m going to be able to pull these off, myself, but we’ll see.

Oh, and you get two stickers with Ryo’s emblem on them for detailing. Neat.

Since the kits are pretty much the same format (except some of the others have heads molded in a single piece, thanks very much), from here on I’ll just post galleries for you to check out instead of trying to throw a bunch more text at you. Enjoy!

Kento of Hardrock, Warrior of Earth

Sage of the Halo, Warrior of Light

Cye of the Torrent, Warrior of Water

Rowen of the Strata, Warrior of Air

That’s it, that’s the Ronin Warriors.

Though I can’t guarantee I’ll build all of these anytime soon or post my builds if they turn out awful, I’ve already started working on Cye. As my least favorite — he wanted to abandon Rowen in space, after all — I don’t mind so much if I botch the build during the learning process 🙂

Have you picked this set up for yourself? Let me know your thoughts, and who your favorite warrior is!

If you don’t have it yet, you can grab it while it’s still available here: